Road warrior: Howard Astill's '66 Mustang is a practical pro tourer that rakes in the tinware

STREET Machine legend Howard Astill has been a busy bloke since he made the move from Broken Hill to the NSW South Coast a few years ago. He’s had a hand in building some super-neat cars, including Mark Arblaster’s reborn WAR440 (SM, August '11 ), Rod Vandersee’s XB coupe (SM, April '13) and Darren Blackman’s XB coupe, which will be featured in the September 2015 issue of the mag.

Howard’s own road car is his ’66 Mustang, which is a great example of a practical pro tourer that can also rake in the tinware at trophy time. It is a cracking car - we particularly like the dash treatment - and Howard drives the pants off it! Here’s the full story from when we featured it back in April 2008. 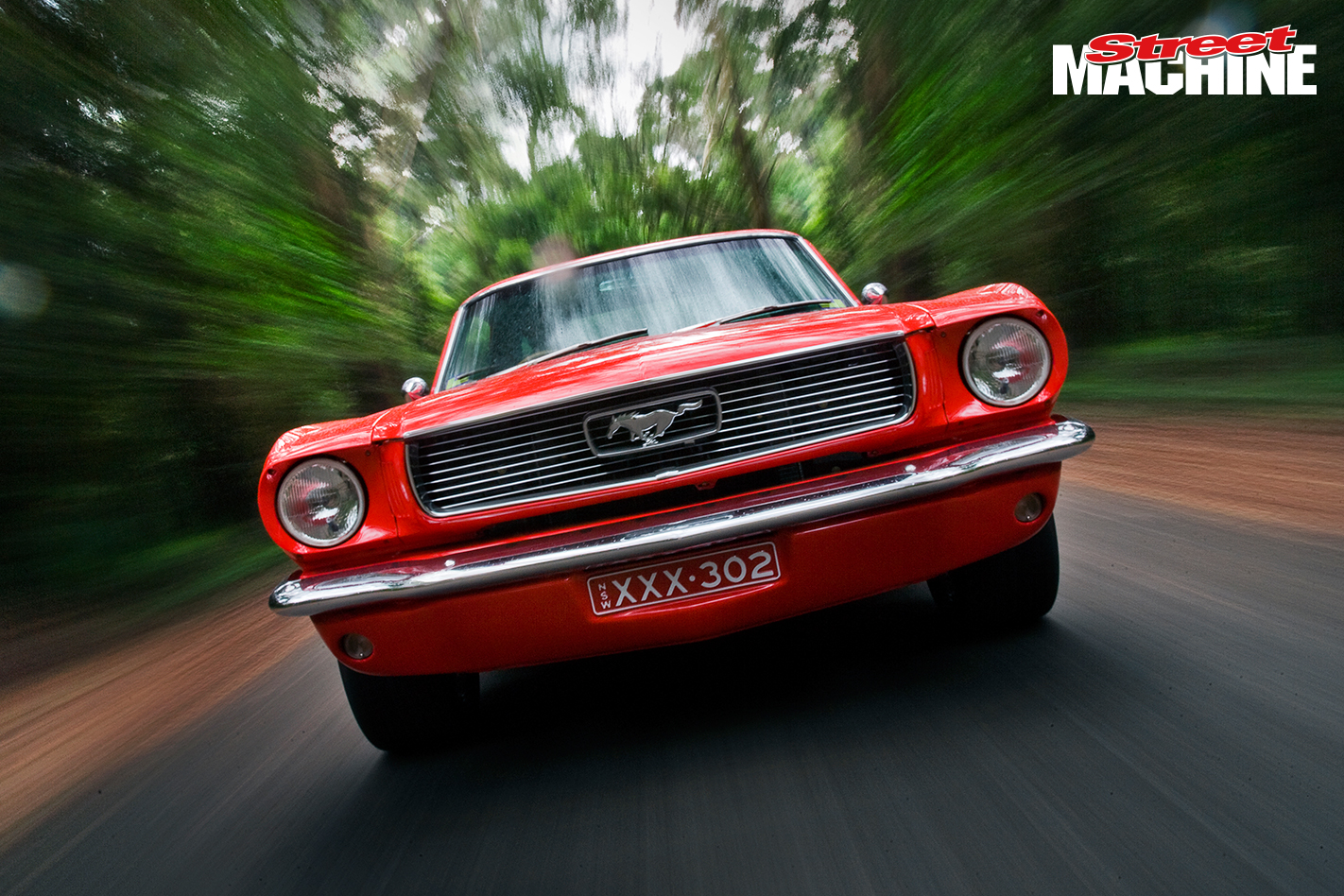 Howard's intention was never to build a show car, but whether he like's it or not this thing's a street elite stunner

Like many street machiners, Howard, his family and a team of helpers have been driving at the redline toward a Summernats deadline and the long hours have almost caught up with him — almost.

“I’m not ready to switch off just yet,” he says. “I’m not sure if I’ll be able to restart. It’s been a big few days.” One eye closed, he peers at his Mustang under Peter Bateman’s soft studio lights. 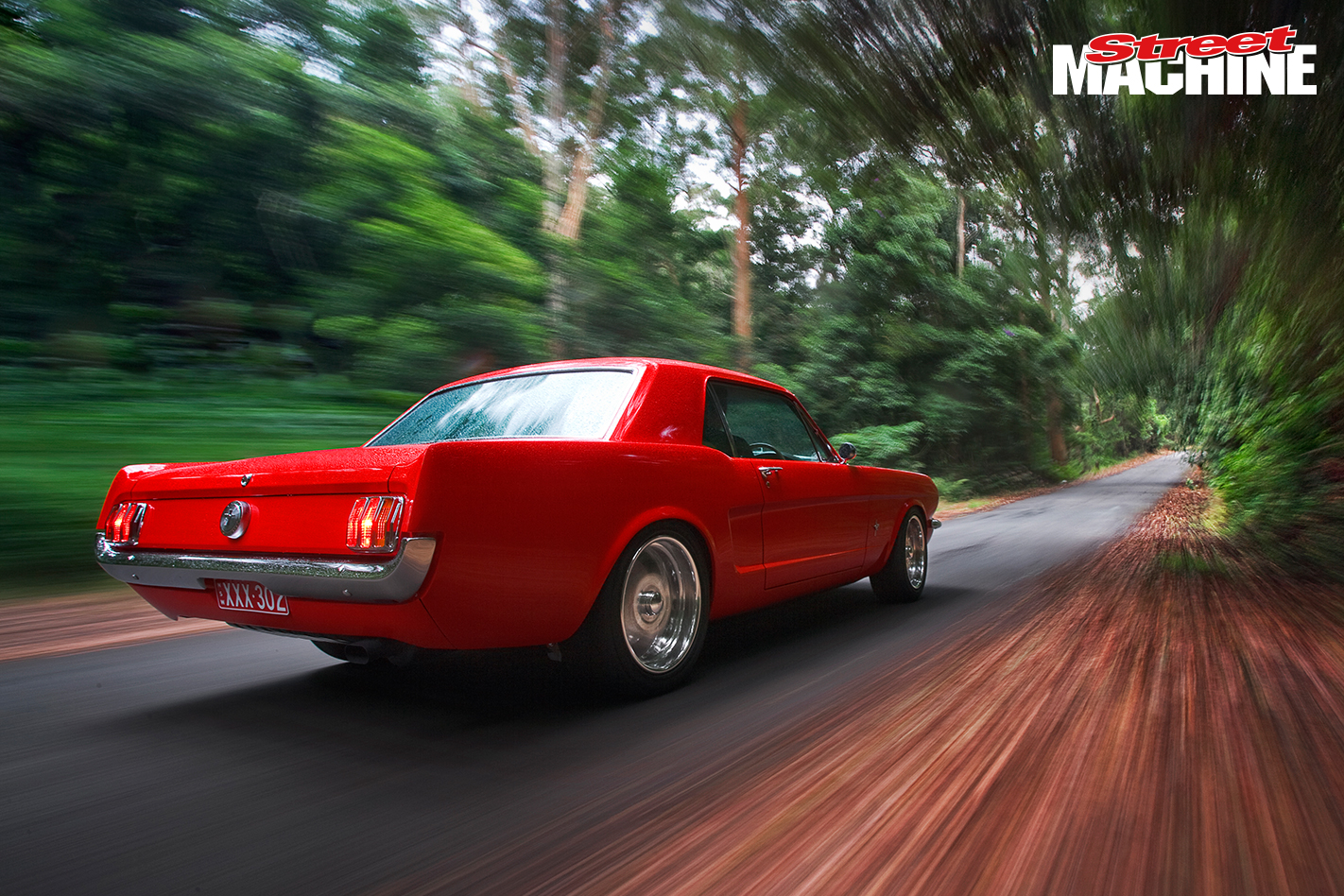 The '66 Mustang is a usable pro tourer, designed to be driven - hard

“This is really the first time I’ve seen it from a distance. Damn, I’m happy with those gaps!” he says, swinging his feet to the floor, refreshed after no more than 10 minutes sitting still.

“I reckon they’re the best I’ve ever seen, even if I do say so myself. But jeez, they’d want to be — I spent weeks chasing them.”

After the dozens of thumbs-ups and handshakes from the Summernats crowd, this self-compliment is possibly the ultimate accolade. 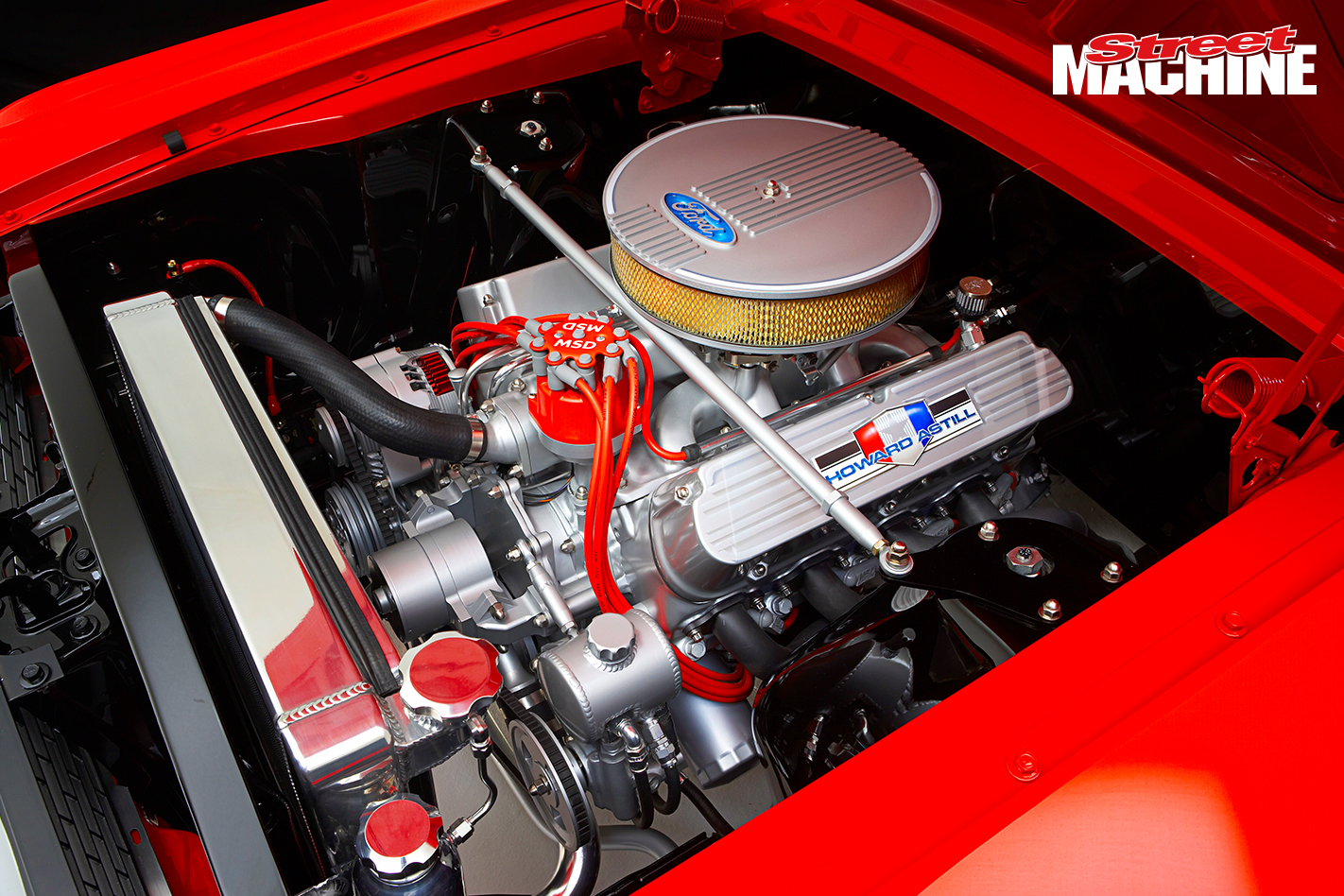 Under the bonnet is a Barry Grant carb-fed, 302-cube V8 Windsor producing a torquey and usable 385hp

“I’ve always preached that if you want to win trophies, you’ve gotta do what the judges want,” Howard says. “You have to build the car to suit the judging sheet and that’s how I’ve built my cars in the past. But this one I wanted to build for me.”

After two decades of show cars — Ford Falcons and one compact Fairlane — Howard wanted to build a Mustang he could drive hard, fulfilling a long lusted-after dream. His road car plans required a good shell and fortunately a mate (one of the Rare Spares co-founders, Dave Ryan) found a cracker while looking for his own. 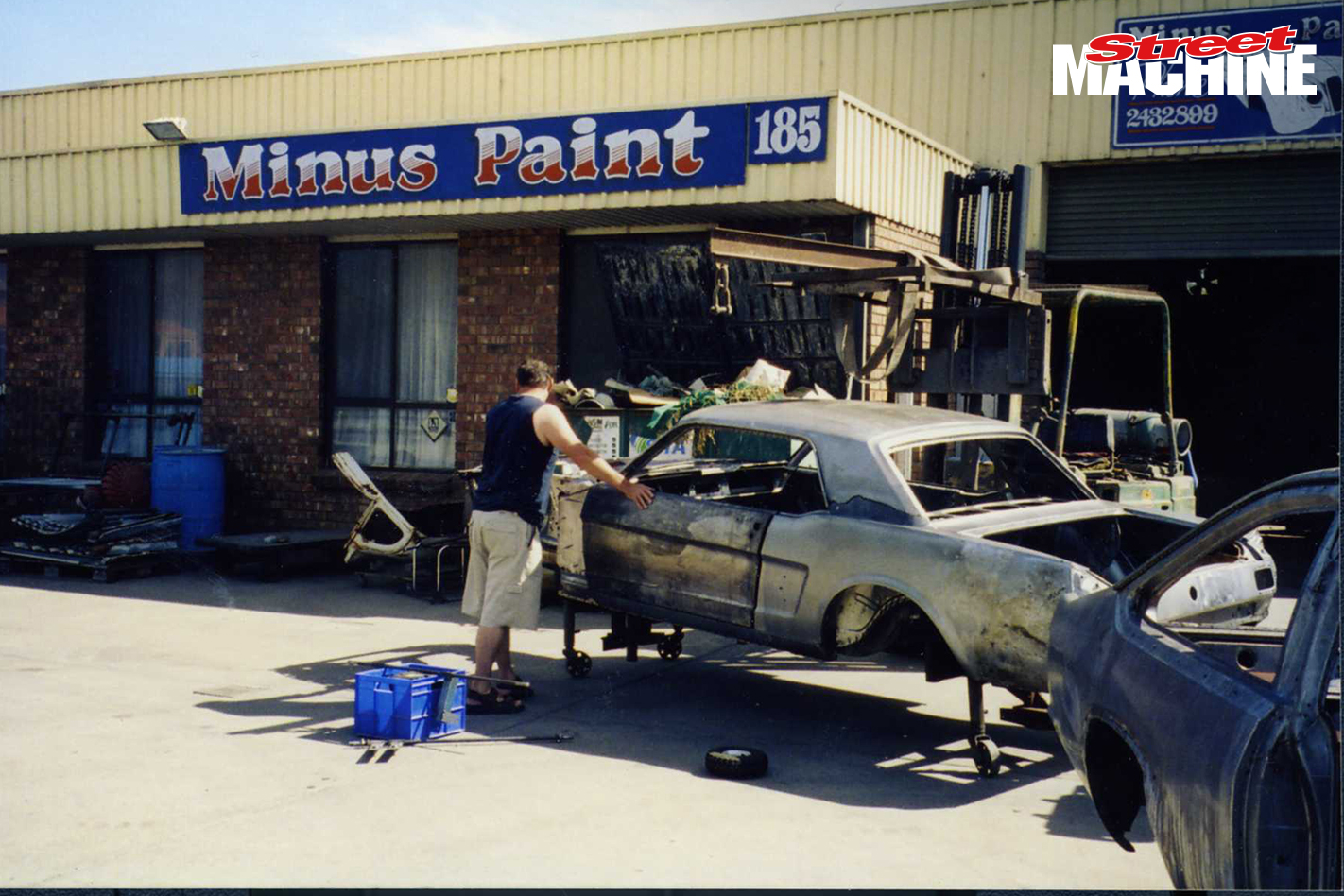 “This was sitting next to one he was looking at,” says Howard. “I drove down [to Victoria] the next day for a look and it was perfect for what I wanted to do.” It was in tatty condition but the six-cylinder engine worked and it was driven onto the trailer. Towed home to Broken Hill, Howard laid down a strong foundation, starting with sill reinforcement.

“They tend to move around a bit,” he says of the Mustang body. “I wanted this to handle so I needed to strengthen it. A sheet-metal bloke in Broken Hill folded it up 5mm at a time to get the radius on it. It runs the length of the floor from the torque box up front.”

Other magic metal touches include the flat firewall, the de-seamed rear quarters, recessed front indicators and reshaped rear valence. These were completed after Howard rectified the production line glitches — “I had no idea how bad Ford’s panel fit was,” — and some rust in the quarters, one door and the floor. 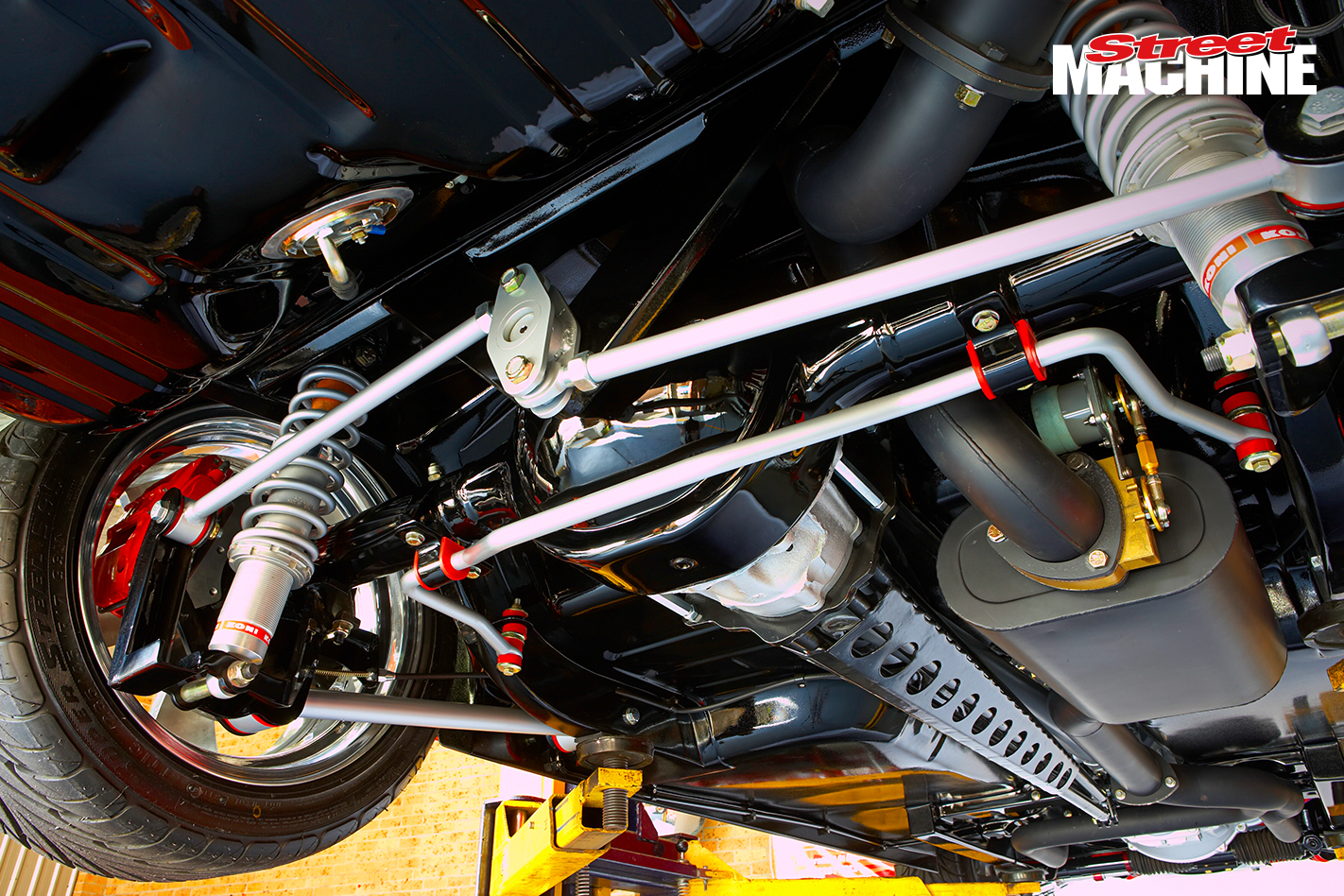 The gearbox is a Tremec 3550 TKO five-speed, while rear suspension is an RRS three-link system built around a nine-inch diff

Halfway through the build, and with most of the underside complete, the car was relocated 1500km from Broken Hill to the Astill’s new home and workshop on the NSW south coast, where the real work began.

From May 2007, Howard committed to the car full-time, nine-to-five, six days a week, spreading the mess between his home and Spray Fever in Campbelltown where the paint was to be applied.

Howard was happy with his body prep, but Spray Fever’s Gareth Davies reckoned things could be better. “We put a straight-edge on each door and there was 10 or 15mm woof,” Howard says. “All cars have it but you never notice. I was happy to leave it that way but Gareth said I must fix the doors. I said no, because it’s a Ford and all Fords are made like that. But Gareth said they don’t have to be. 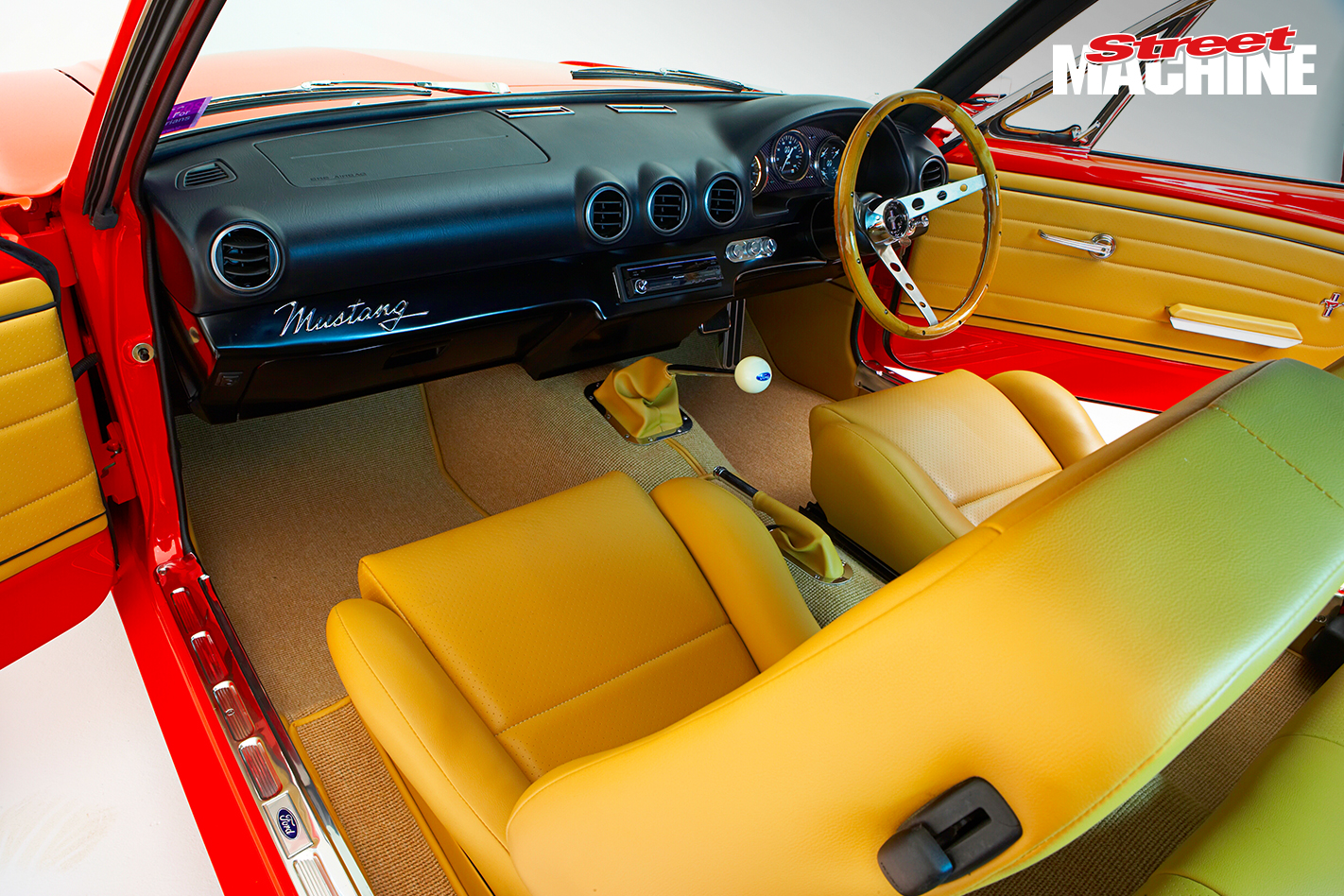 Well, we discussed it for about two hours and eventually I relented — ‘Let’s effing fix it.’ So each door was heat-shrunk to get it perfectly flat. If we’d stopped bickering we could have fixed the doors in two hours instead of talking!”

That wasn’t the end of the body work. “You do one thing and then you need to do another,” he says. “In this case, because we’d made the doors perfect, the woofle in the rear of the front fenders was noticeable.”

So they were massaged, leaving the body finally ready for John Hristias and Greg Henry to apply the straight red PPG tint base. 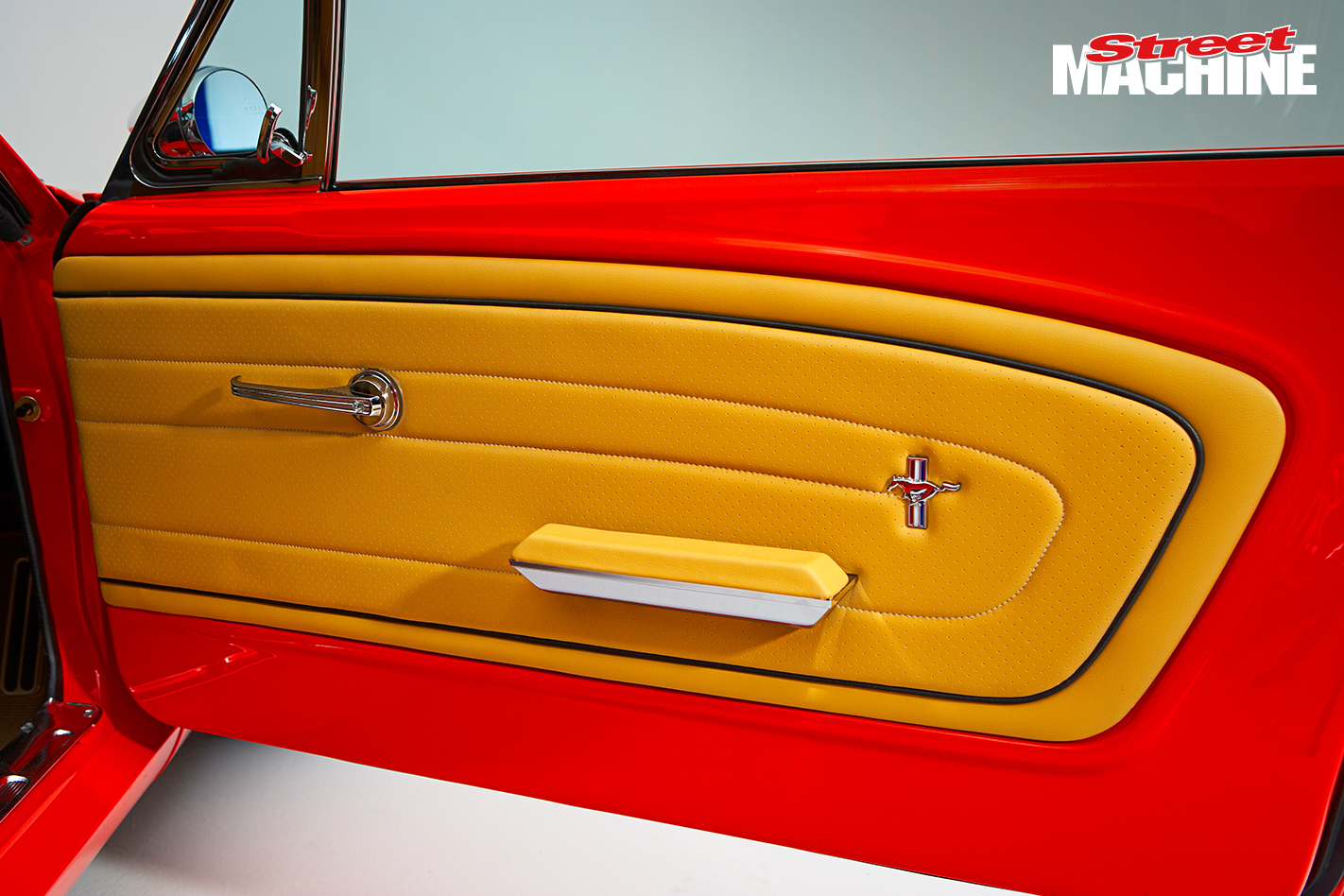 With the beige leather and timber tiller, the Howard's Mustang almost has an old-school Ferrari flavor to it

“We had 60 separate components in the spray booth,” explains John, who is PPG’s training manager as well as a Summernats judge. “It took 11 days in the booth and that was after Howard had spent a couple of weeks with filler and smoothing welds.”

Howard reckons he, John and Greg put in more that 650 hours preparing, painting and detailing. The result was worth all the hard work: the sides of the car look like they’ve somehow been sliced from glass.

Underneath, the floor’s final finish is textured black for a factory look, rather than the painted gloss of a top-shelf show car. The texture will hide the stone chips better when Howard goes out driving. 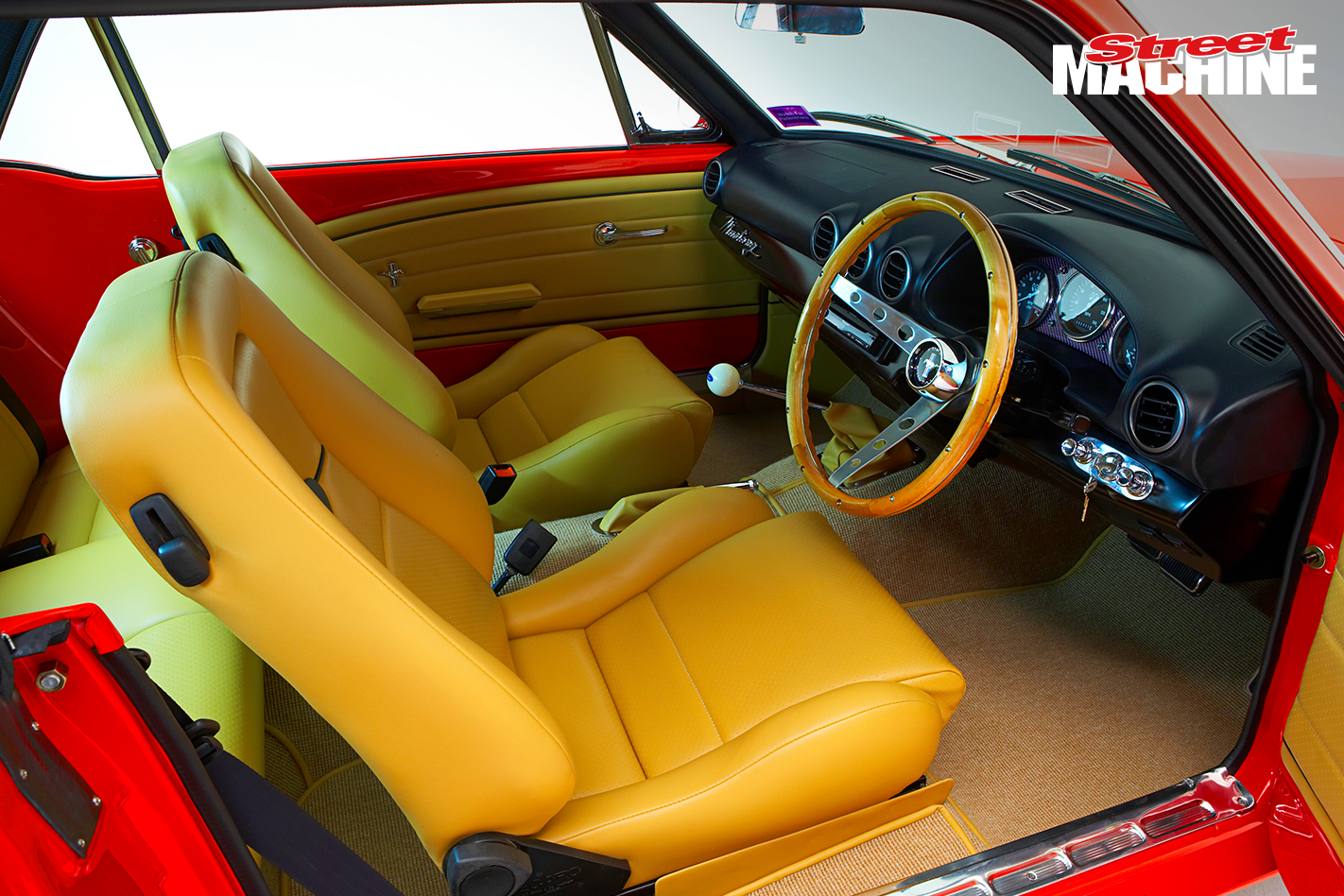 Even so, Howard reckons the body could be better. “You might call them blemishes, I call ’em dents,” he says of imperfections which he claims are on the bonnet and turret. “There are also a few ripples but you tend to drown in the wet-looking paint and don’t notice any imperfections. You look at the whole, not the individual parts.”

“We’ve know each other a long time,” Howard says. “Gary and Deby approached me about helping them with Silver Bullet; I asked him to help with the engine.

“I had a few ideas — I wanted a bit of old-school. I wanted something that was tough and reliable. I wanted that feeling of having to take a look outside when it pulls up in your driveway, know what I mean?

“It makes power and torque across a 3500rpm rev-range. It feels good! It pulls like an HO.” 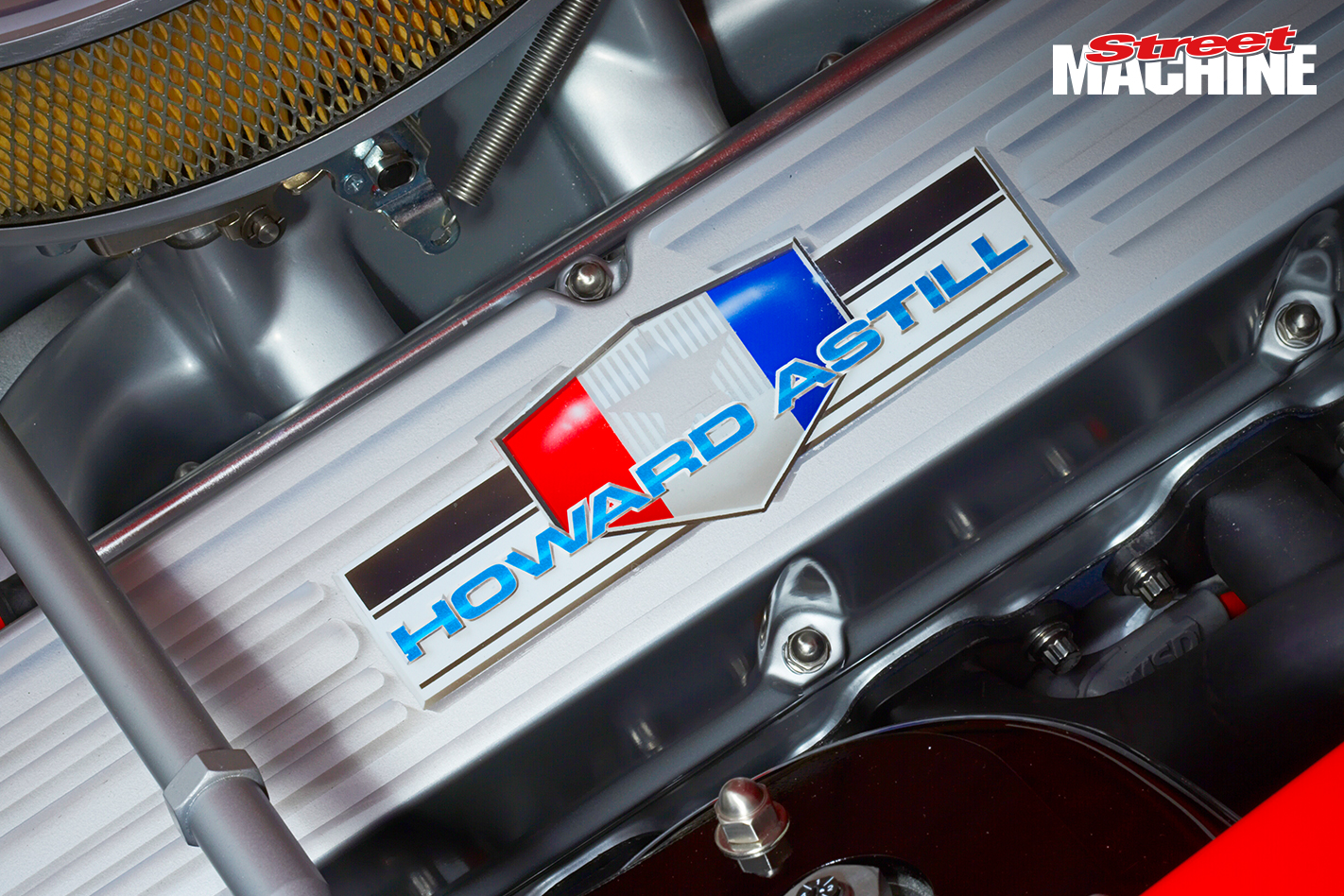 The appearance almost exceeds the power — it’s art. Driveline components on show cars are often finger-bogged and high-filled for a smooth appearance but heat causes putty to fall off. Howard ground and deburred everything, then painted with materials that could take the heat.

The rocker covers are detailed with Howard’s logo, he remade every accessory bracket as well as the exhaust, incorporating a Variflow system under the car. Every line for fuel, brake and air conditioning is hard.

The gearbox is a Tremec 3550 TKO five-speed, while rear suspension is an RRS three-link system built around a nine-inch diff. This bolt-in package replaces the leaf springs with coil-overs, locating the axle with a Watts link and a long torque arm that reaches forward to a pivot point adjacent to the gearbox.

RRS is the name on the front suspension and the brakes too, with the Sydney-based manufacturer supplying the power-assisted rack and pinion steering system and the ‘Phase IV’ front struts that replace the Mustang’s upper and lower wishbones. 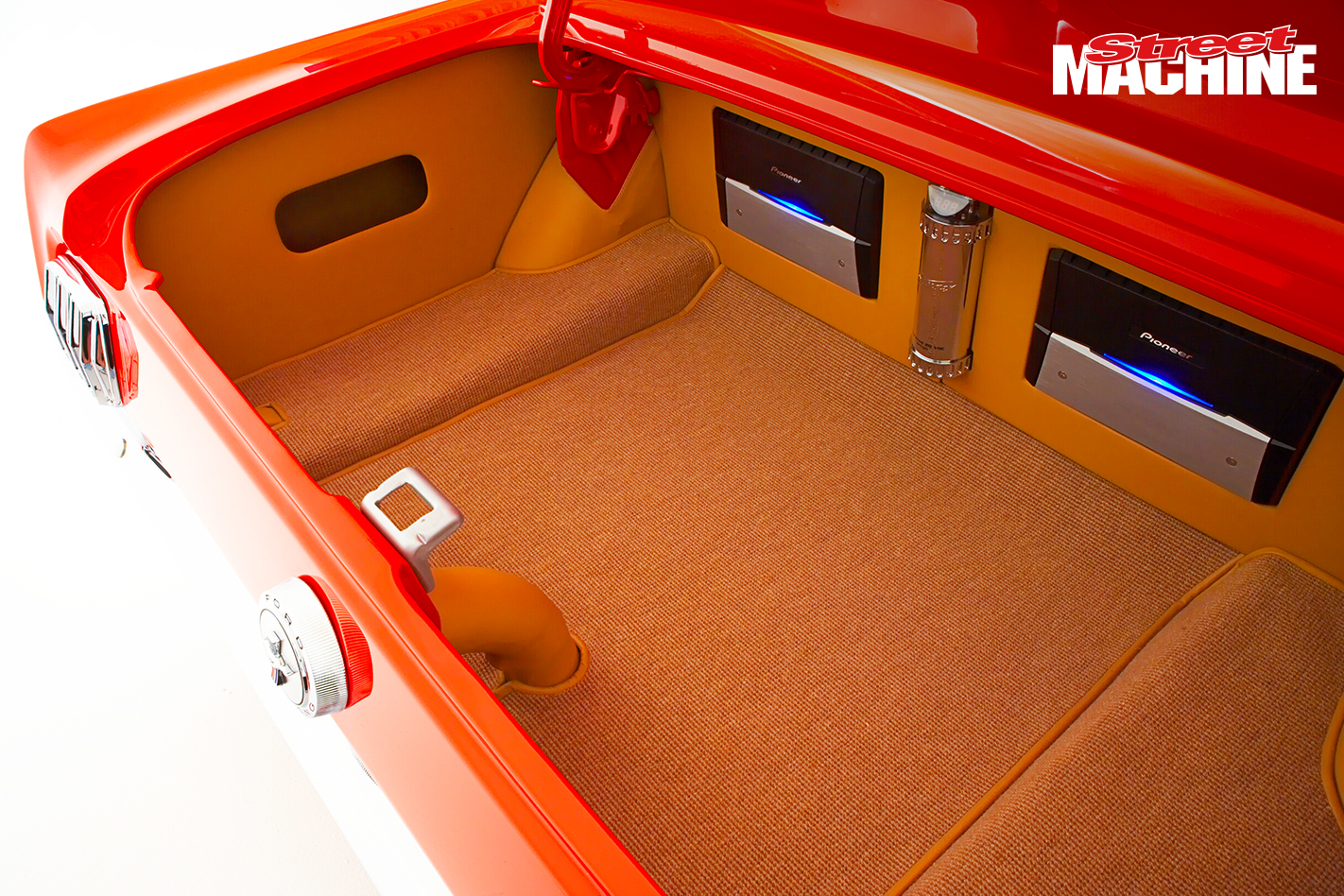 The cross-drilled and slotted rotors are squeezed by six-piston calipers up front (matched by six-pots at the tail too) plumbed from the RRS under-dash master cylinder/booster kit.

Howard sketched a custom dash but then found his ideas ready-made in a Nissan S15 200SX. Howard bought one, reshaped it and had it plastic welded by Steve at Penrose Motors in Unanderra. An RRS remote-booster pedal box mounts under the driver’s side of the dash with the reservoirs accessible behind the redundant passenger airbag cover. There’s a Vintage Air air-conditioning system tucked under there, too.

Front seats are restyled Recaros with every stitch put in place by Rob Lingard at Hot Rod Trim in Shepparton, Vic. The Antisun tinted glass is all-new for that perfect touch, sourced through Rare Spares, and a new wiring harness was strung in by Howard, then sorted by Tom from Pro Bag in Unanderra, NSW.

Most of the car was dummy-assembled before the final build. After paint and buffing were finished, the hours spent — and the people involved — increased for the sprint to the Summernats finish-line.

Right to the end, Howard stuck to his philosophy that this was a car for himself. “I was asked to be part of the Meguiar’s Great Uncover but I refused. I didn’t want to create that expectation of it being an elite car, because it’s not; it’s a street car.”

Even so, the Mustang was placed in the Top 10. That’s elite, whether he likes it or not.

Howard is ecstatic at the response. “I’ve had grown men almost cry over the car; it’s been overwhelming,” he says proudly. “People just stand there and go: ‘Faaark!’ It’s come out so much better than I thought.”