Rod Coverdale has a passion for movie car replicas, which means he's got some very cool rides

Rod Coverdale has a passion for movie car replicas, which means he's got some very cool rides

WHEN it came to designing his house in Howard Springs, Northern Territory, the shed – or rather, sheds – were at the forefront of Rod Coverdale’s mind. Every man needs a good shed, and Rod has three of them – four if you include the big metal job down the back of the property that holds his project Lamborghini Countach. That’s all a bit of a mess at the moment though, so let’s focus instead on Rod’s collection of awesome movie cars and Corvettes.

The jewel in his collection is surely the replica of the iconic black Mad Max Pursuit Special V8 Interceptor. It all began about 30 years ago, when Rod bought an XC hardtop stocker with the intention of eventually transforming it into the film car. “After I saw the first movie, I fell in love with the black car,” he says, no doubt echoing the experiences of many Street Machine readers. “It was the highlight of the whole thing, and from then I just had to get one.” 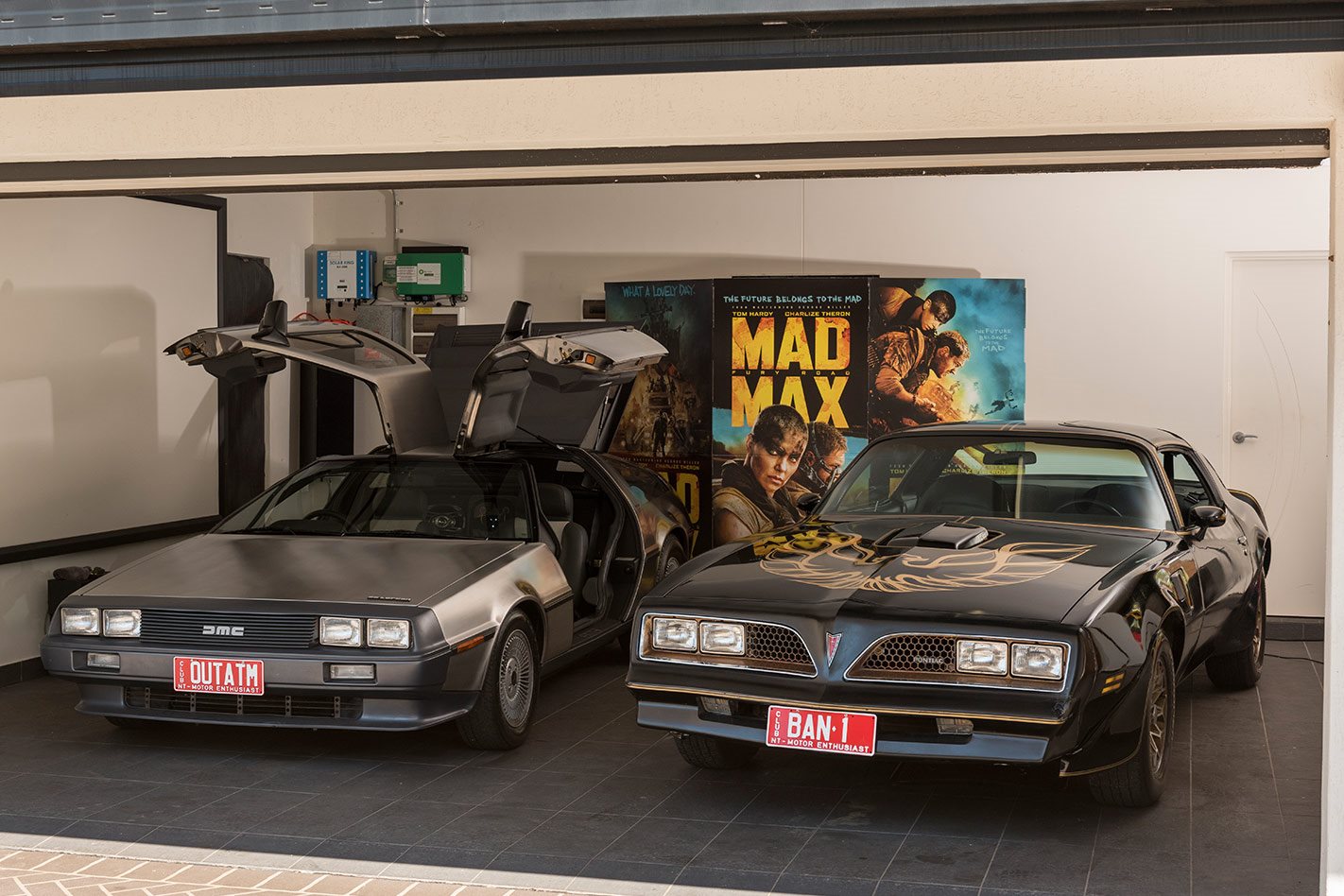 The time finally came back in 2009, when Rod pulled the XC off the road for a full rebuild in Mad Max spec. “All of the parts were pretty easy to get as there was a bloke in Perth building them for people in Japan – they’re big fans of the movie over there!” Rod laughs. “So I had all the pieces, I just needed someone to cut out all the rust that had developed over the years. But every shop I took it to here in Darwin said it was too far gone. So I sent it over to Justin Hills at Hills & Co in Taree, NSW, where they took it back to a bare shell, fixed up all the rust and sandblasted the body. Then I had it painted black and sent back here, where I finished it off.”

The guys did a pretty good job of the car too; it was voted the best Mad Max replica in Australia by the mechanic who built the original movie car, Murray Smith. The car was even filmed as part of the Top Gear episode where Clarkson, Hammond and May drove sports cars across the Aussie desert, but it never made it to air. 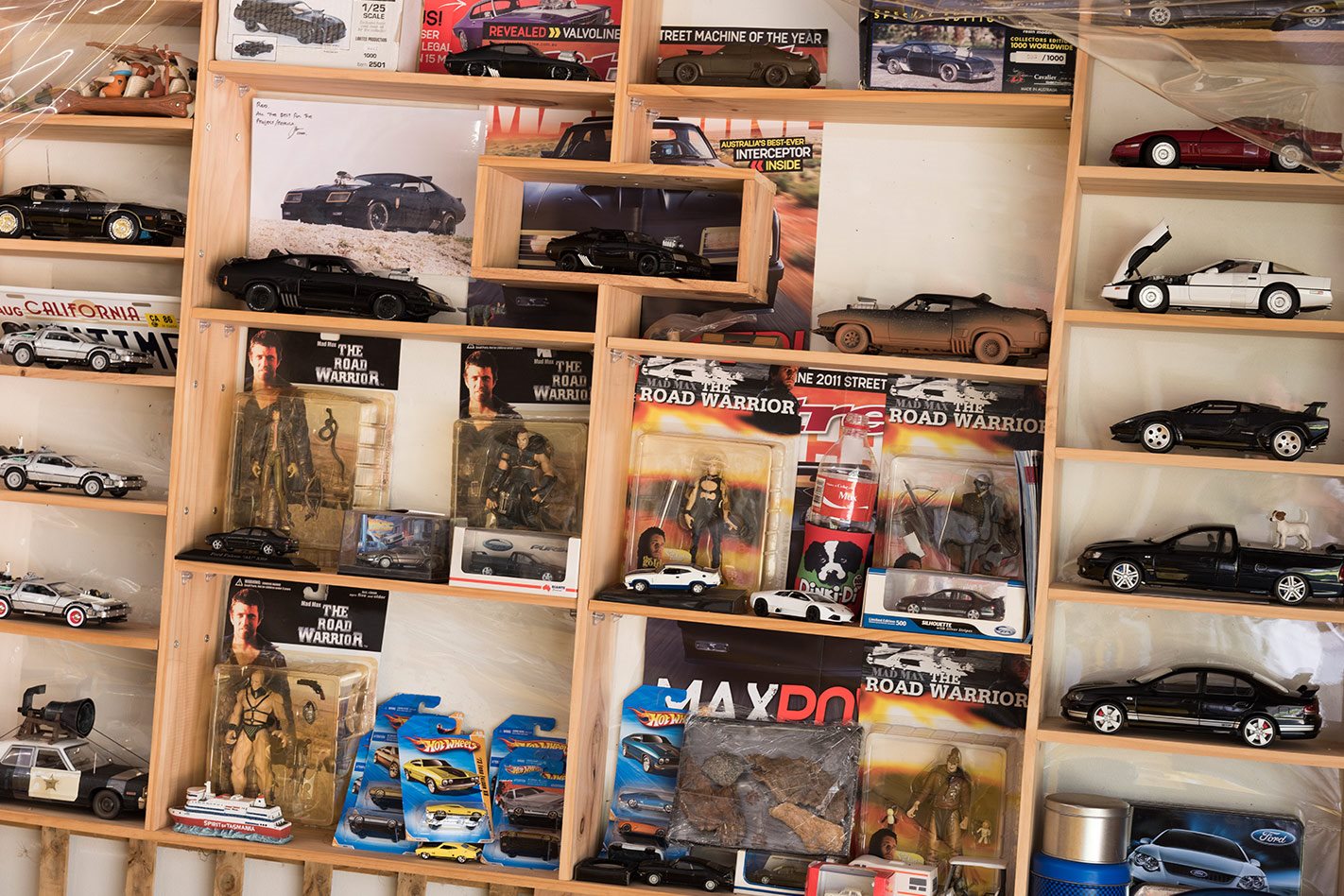 “Meeting the Top Gear boys was awesome,” Rod enthuses. “They all loved the car and we filmed a chase scene with the Mad Max coupe and my yellow Interceptor, but they film so much stuff and not all of it makes the final cut.”

Which brings us to Rod’s other Mad Max car – Max’s yellow MFP XB Falcon. “I’ve had the cop car for about two years,” he says. “I saw one at Silverton where they filmed Mad Max 2 and thought that looked all right, so I started building one myself. Then this one came up for sale almost completed, so I bought it and finished it off.” 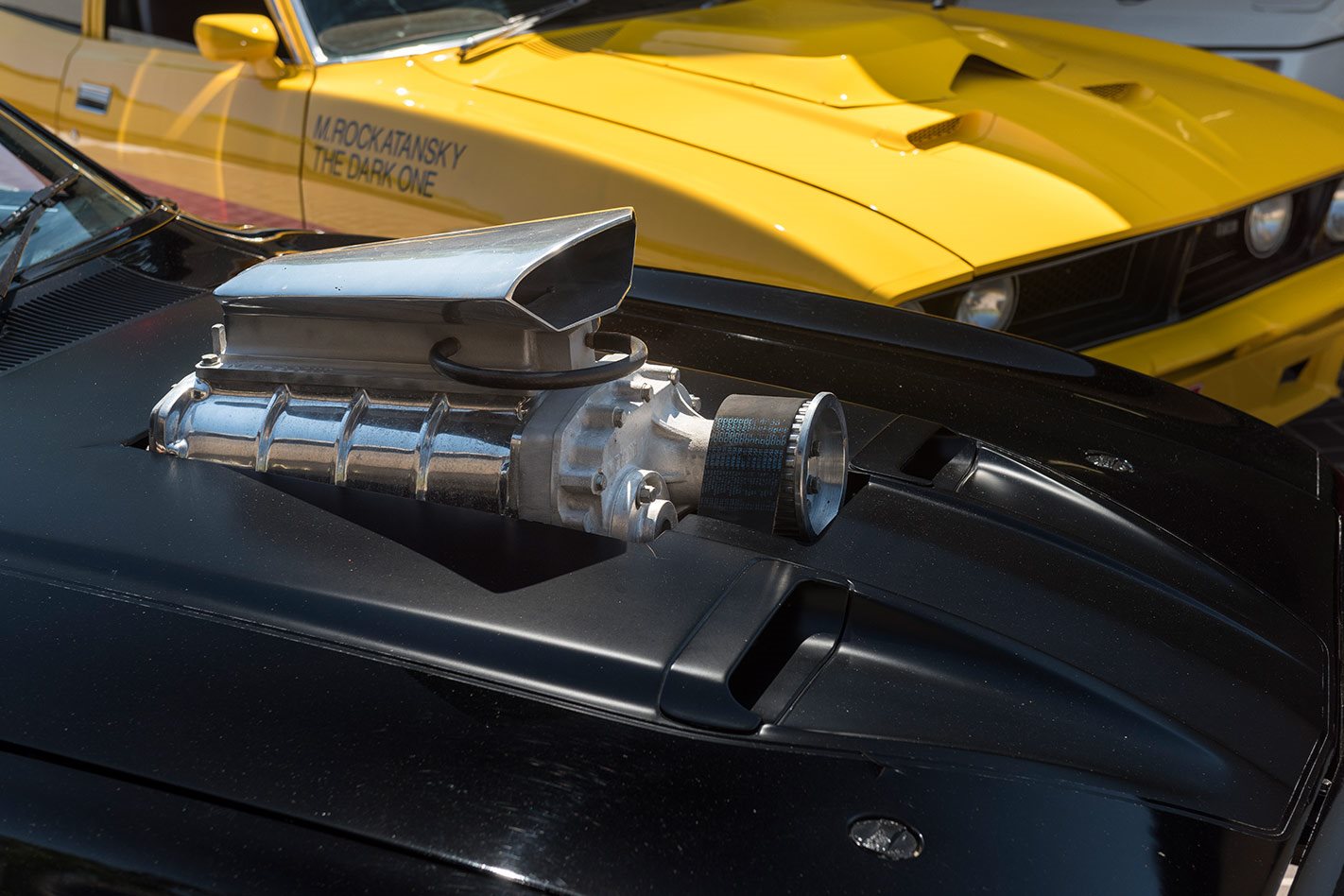 The two Mad Max cars have got their own shed, filled with all the cool movie memorabilia, and Rod has met lots of people who worked on the films.

He’s also met Australian racing royalty in the form of Allan Moffat. “He was here at a local Thai restaurant one night and I was driving the black Interceptor and he asked me what sort of car it was. I thought he was joking!” Rod laughs. “He didn’t recognise it was the same car he’d won Bathurst in.” 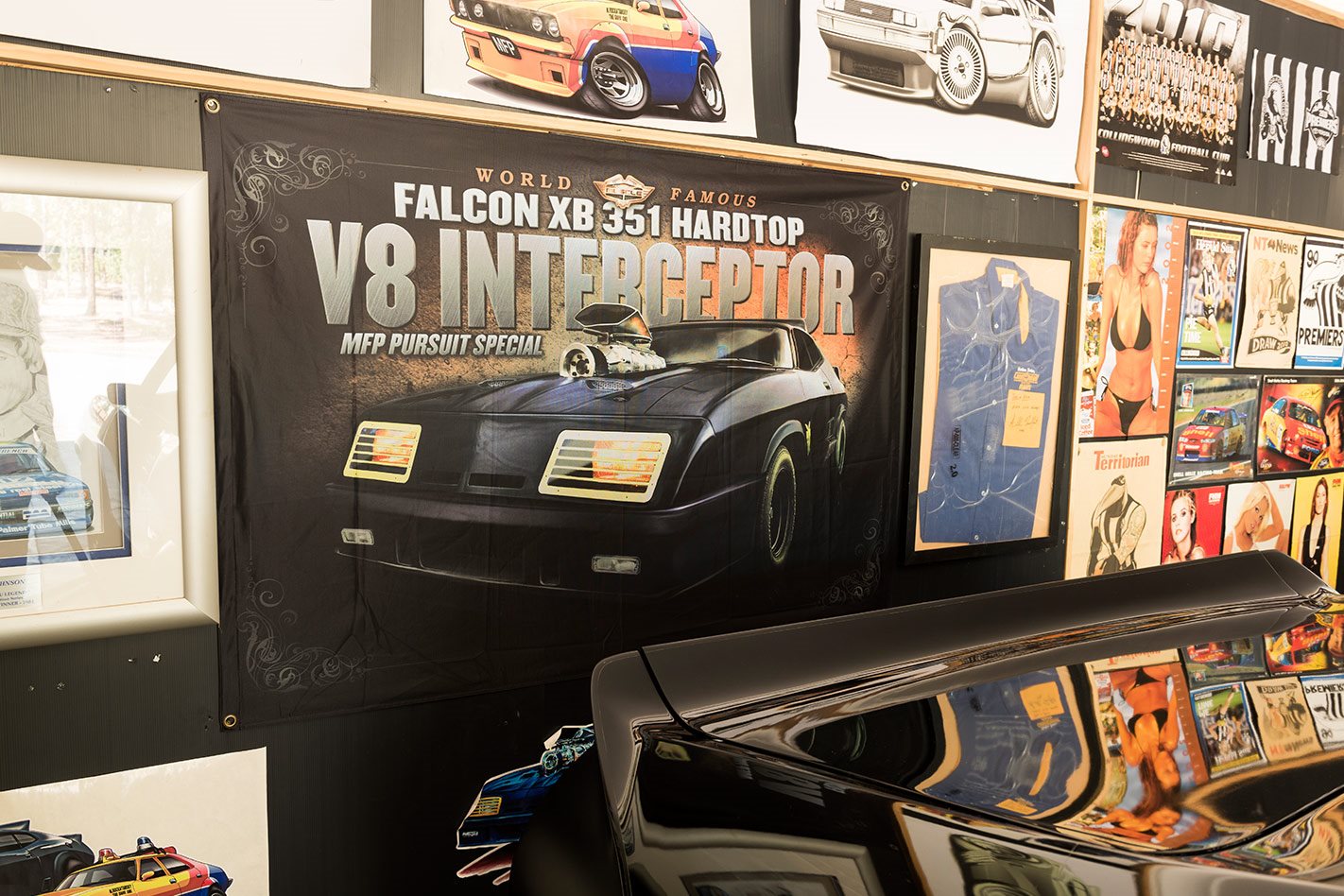 Rod has also travelled around Australia to the various sites where they filmed Mad Max, including the Clunes Reunion Tour in Victoria (SM, Apr ’16).

But wait, there’s more! “My wife and I are big movie fans, so of course things didn’t stop after the Mad Max car was finished,” Rod laughs. “One night we were watching Back To The Future and she said: ‘Wouldn’t it be cool to have a DeLorean?’ So I thought, she let me do the Mad Max car, so I’ll start looking for a DeLorean in America. But then a right-hand-drive one came up for sale in Sydney, so I grabbed it,” Rod says. “For a sports car they were pretty gutless from the factory though, so I turbocharged the engine myself to add a bit more grunt.” 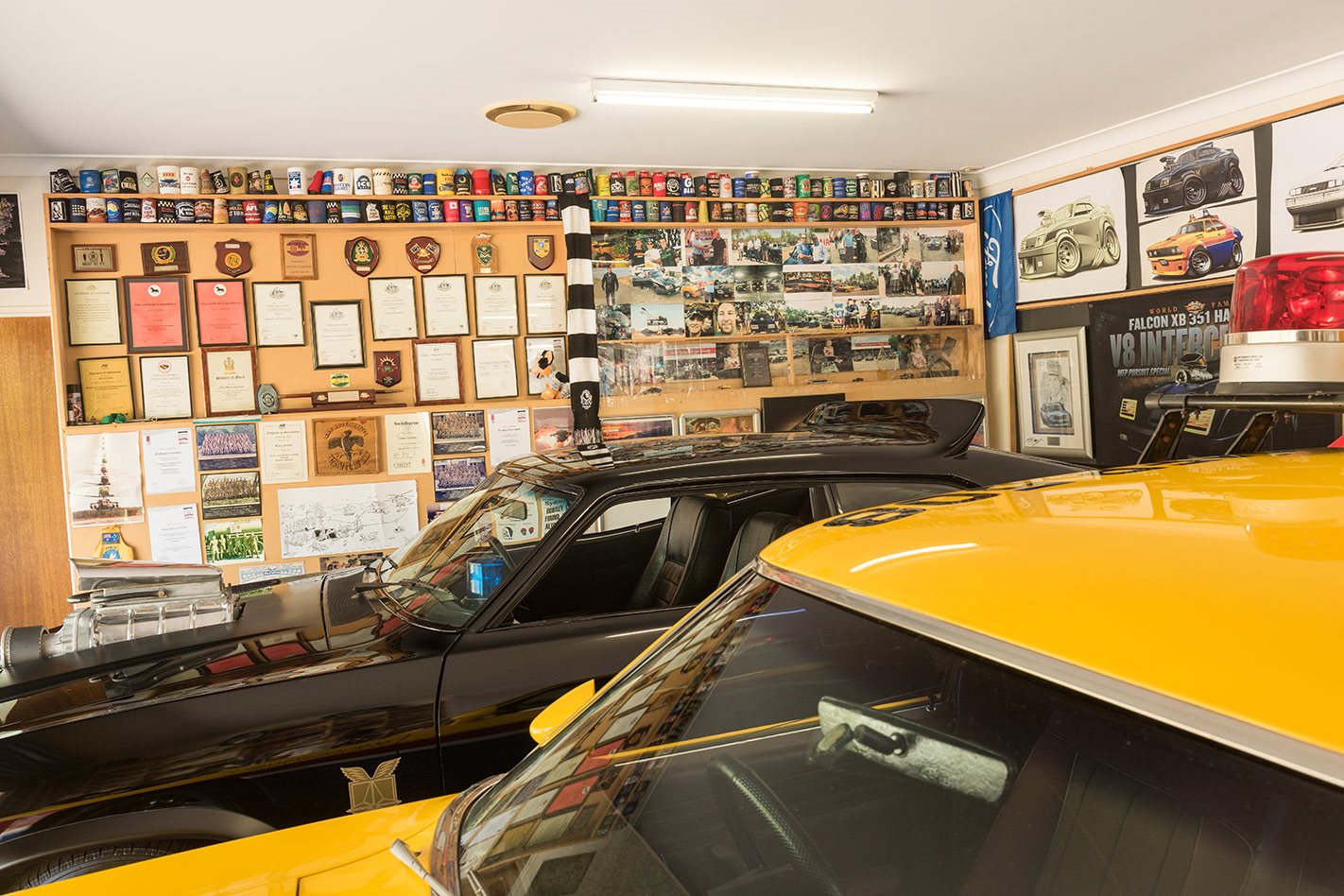 Why no Back To The Future-spec mods? “I have no intention of doing it as a movie car, because I want to drive it and enjoy it,” Rod states, not unreasonably. “I wouldn’t be able to do that if I dressed it up like the film car.

“It’s a similar story with my Smokey And The Bandit Trans Am,” he continues. “We were watching the movie one night and then had a look to see what was around, and this one popped up in Melbourne. It’s a bit rough around the edges, but hey, it’s cool – it’s a Trans Am!”

So what’s Rod’s favourite? “It has to be the black Mad Max car, it’s my all-time favourite movie and the car is awesome.” 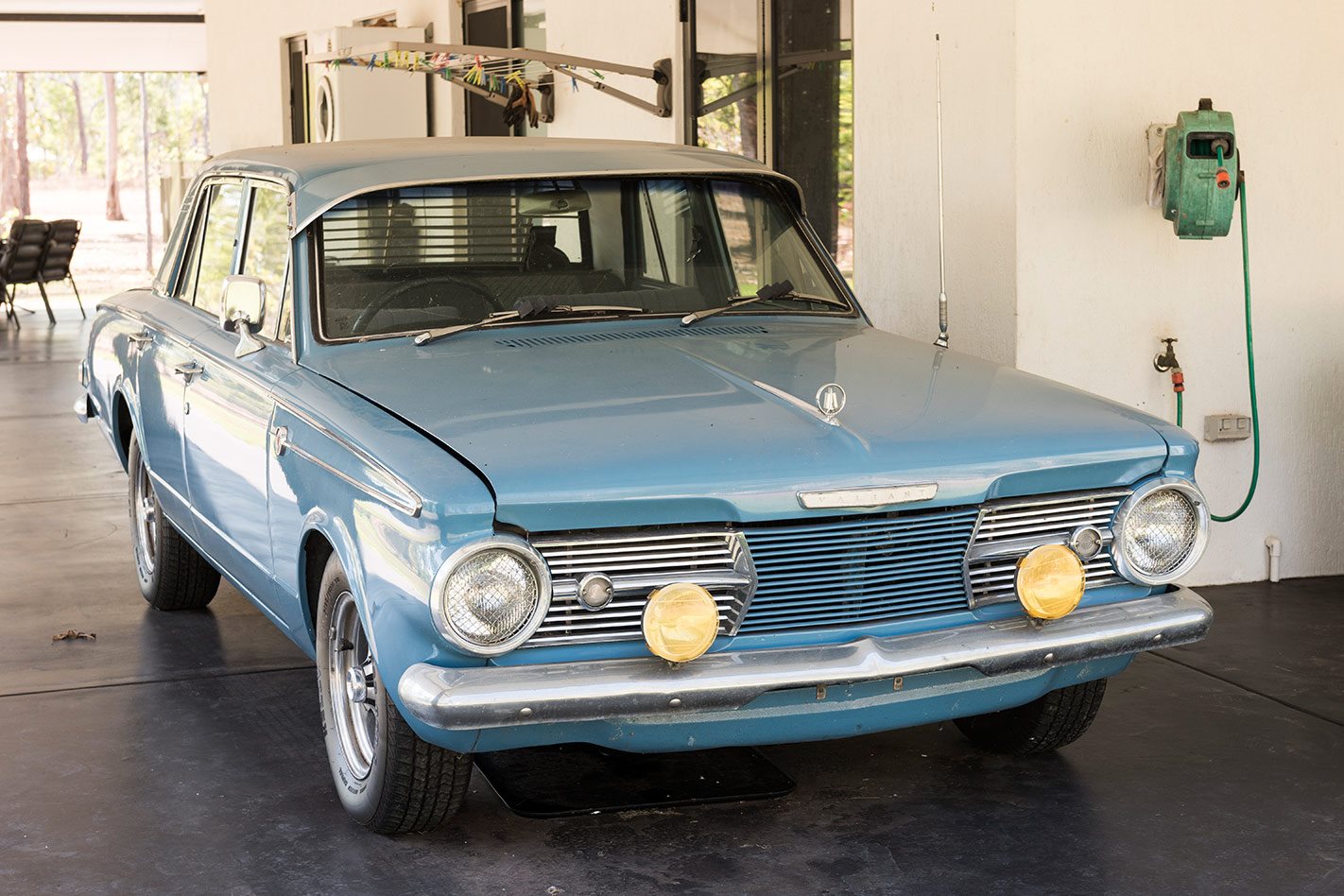 1. This AP6 Valiant was owned by Rod’s uncle, who bought it new. “I remember going for rides in it as a kid,” he recalls. “He tried to sell it a few years ago so he could buy a newer small car, so rather than let it go to someone else I bought my uncle a Camry and he gave me the Val.” 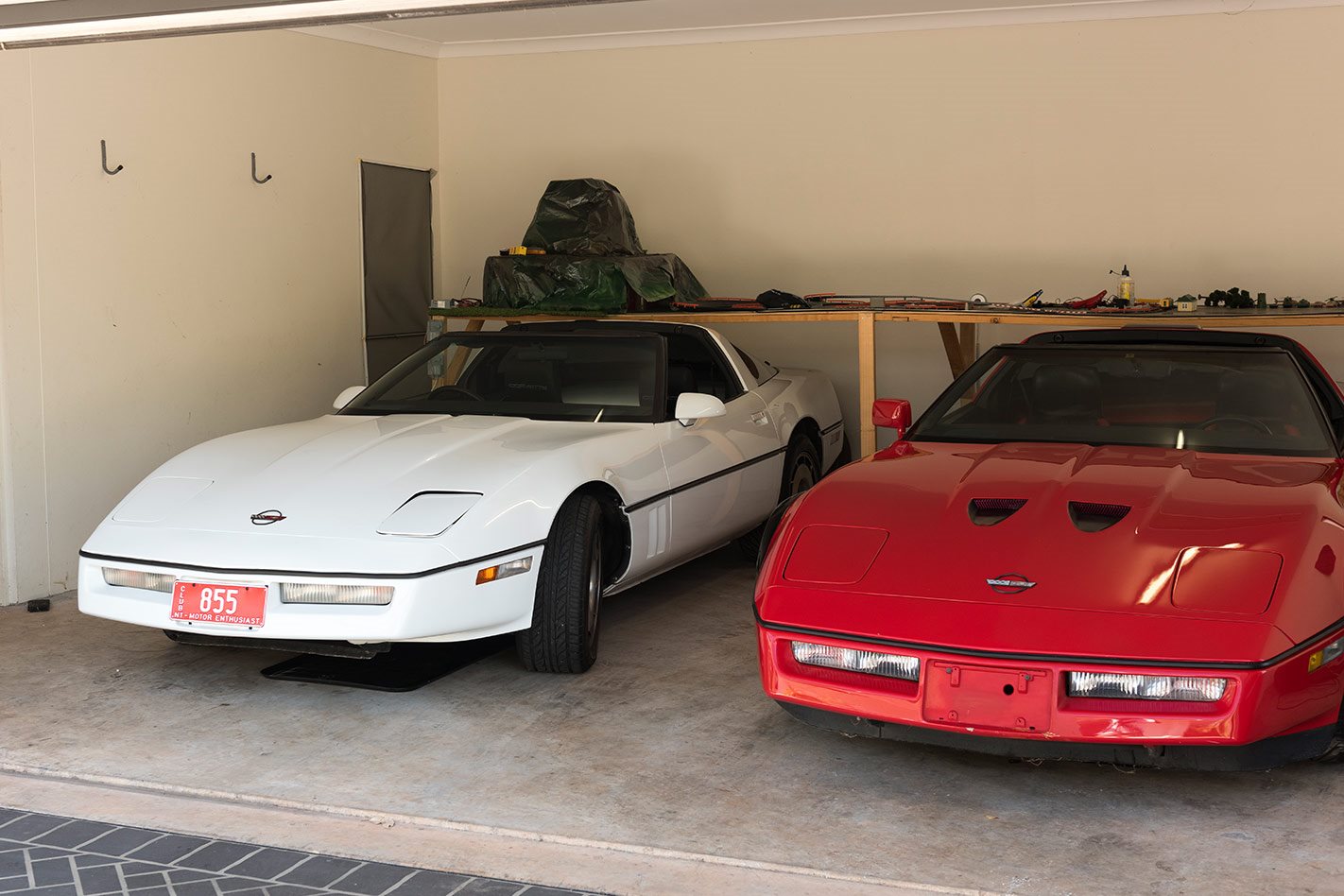 2. “I’ve always been a fan of these C5 Corvettes,” Rod says. “I spotted the white one for sale at a car show and my wife liked it, so I bought it for her.” The red one is supercharged, and was for sale at the local mechanic for cheap, so Rod snapped that one up too! 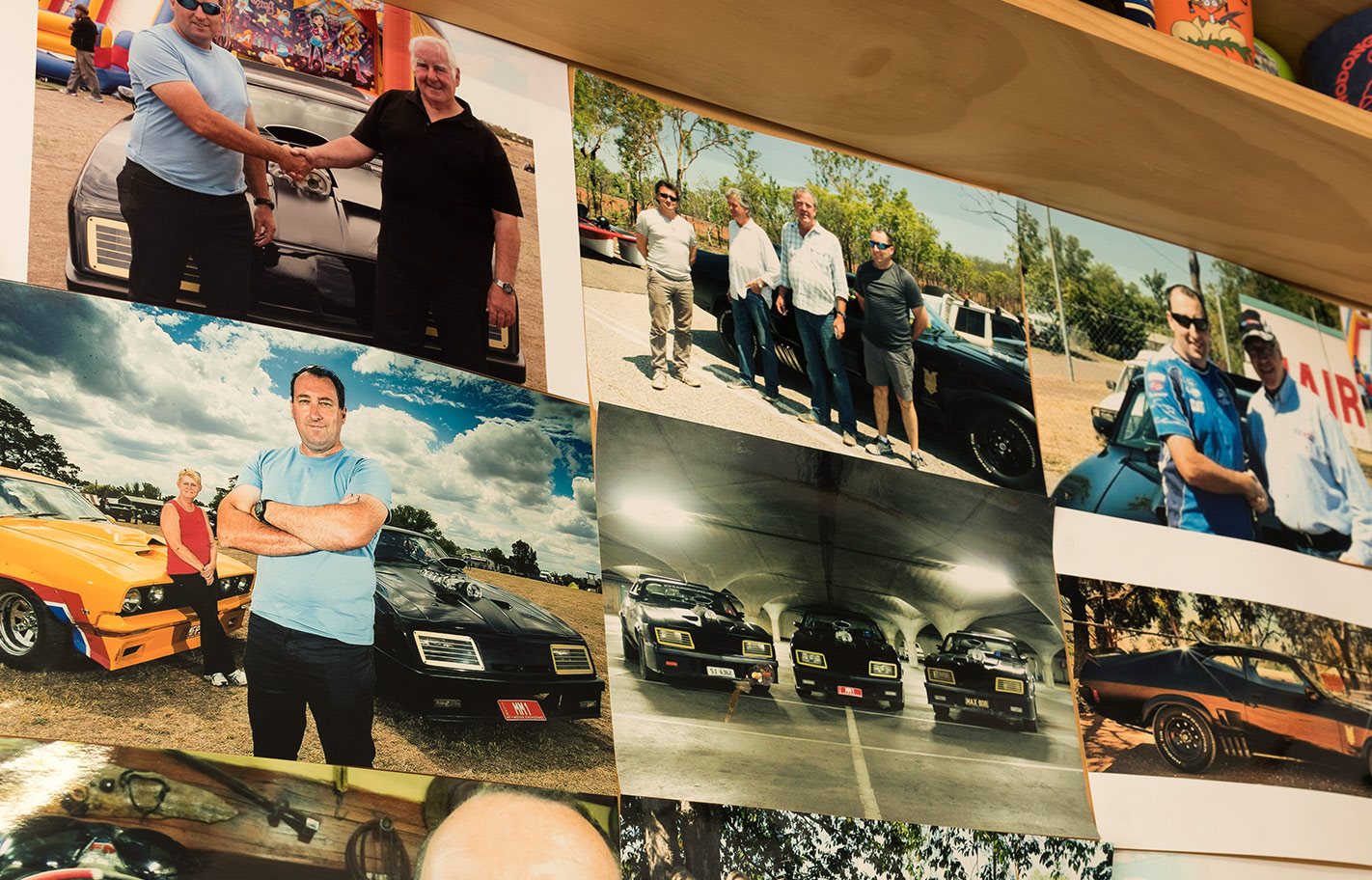 3. Rod has met Murray Smith (top row, left), the bloke who built the original Mad Max car, along with the Top Gear boys (top row, middle), Allan Moffat (top row, right) and more. “Murray had so many great stories to tell,” Rod recalls. “He reckons they couldn’t pay him after they finished the movie, so he ended up keeping the car, and he changed a few things before taking it around to all the car shows. Two years later they wanted the car again for Mad Max 2, so that’s why the car was slightly different in the second movie” 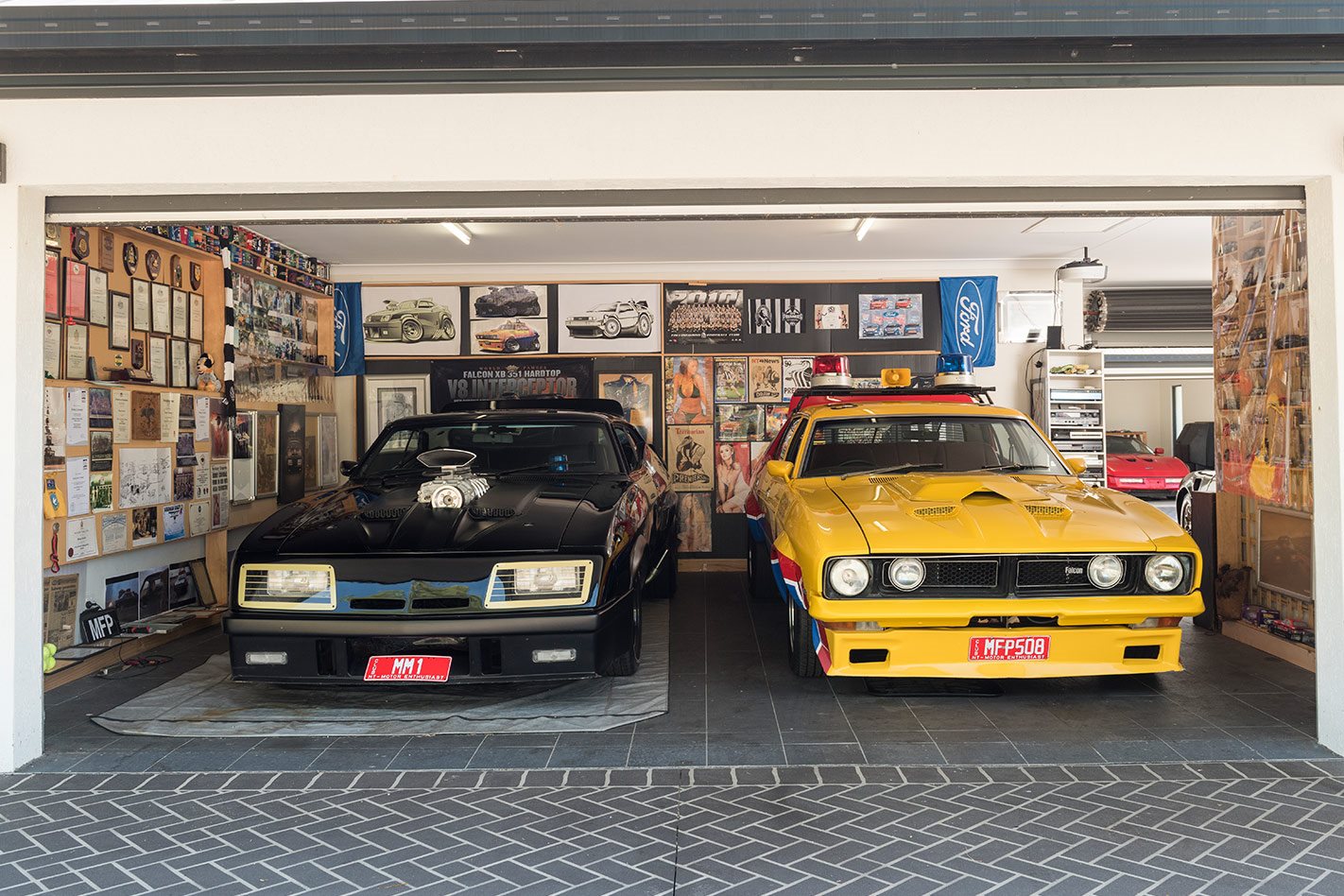 4. Clearly, Rod is a massive fan of the Mad Max cars. But do any other film or TV rides tickle his fancy? “If I was to get another movie car – and I don’t think I will – it would be a ‘General Lee’ Charger from The Dukes Of Hazzard,” he says. “I also like the Gone In 60 Seconds Mustang – the boys that built my car were doing one while mine was there, and it looked really nice.” 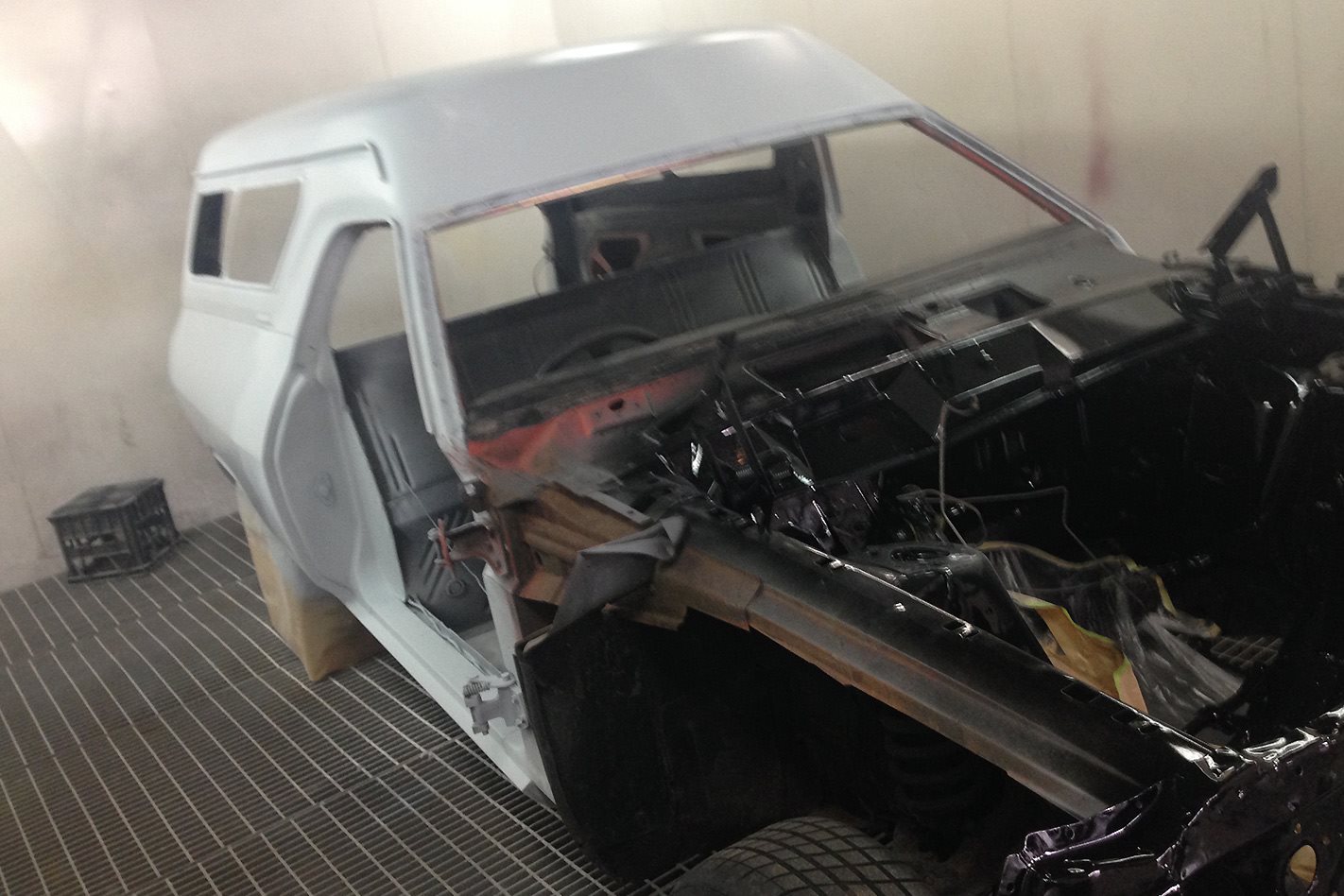 5. This is Rod's cool XC panel van in the build. “The plan is to build the van into a full-on 70s-spec street machine with trumpet exhausts and everything,” he says. “It’s just been primered, and is ready for paint, so I’ll be putting it back together pretty soon. It’s had a fair bit of body work done to it; the roof had a tree fall on it, so I got it cheap!”