FIRE Chief is the latest brain-melting creation from Mr Hot Rod himself, Rod Hadfield. “It started as a pair of rear wheels and an engine,” says Rod. “I knew what I wanted to build; I also knew it wouldn’t work without those wheels and that engine.” The entire theme of this 1948 Fiat Topolino is based around the engine – a gorgeous-looking 527ci V12 out of a 1948 American LaFrance fire truck!

“It’s the only LaFrance-powered street rod in the world that I know of,” says Rod. As for the 15-inch wide wheels? Well what can you say, Rod’s a passionate hot rodder, who loves his nostalgic Halibrand magnesium wheels. 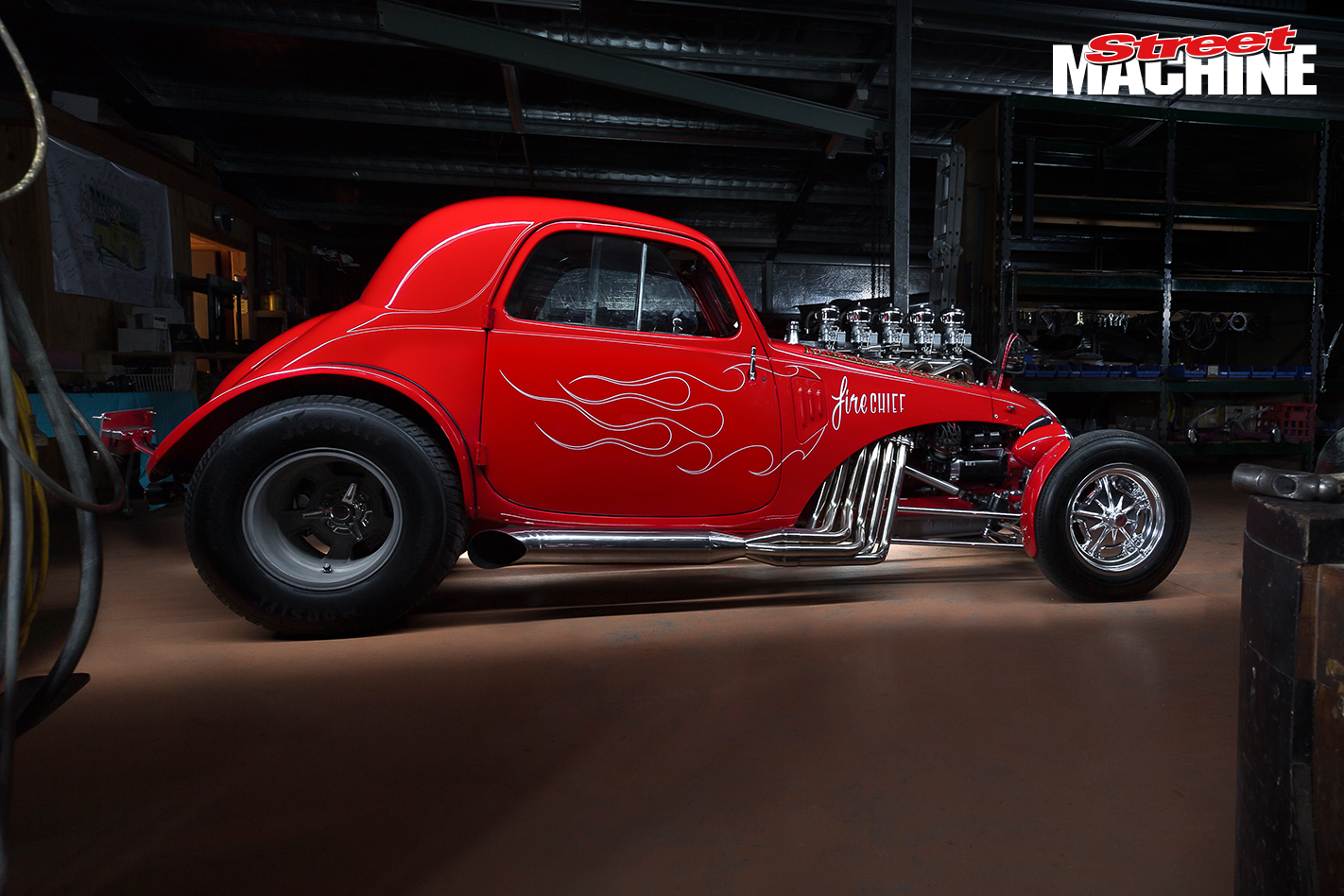 According to Wikipedia, LaFrance was founded in 1832, and was America’s oldest fire apparatus manufacturer. Although ceasing production in 2014, LaFrance is the quintessential American fire truck, whose iconic shape is recognised the world over.

Sourcing this vintage powerplant was somewhat straightforward. Rod placed a call with the Texas Fire Museum (well known for restoring LaFrance fire trucks) and told them he needed an engine for a hot rod he was building. Luckily, he ended up with a representative who understood hot rodding. 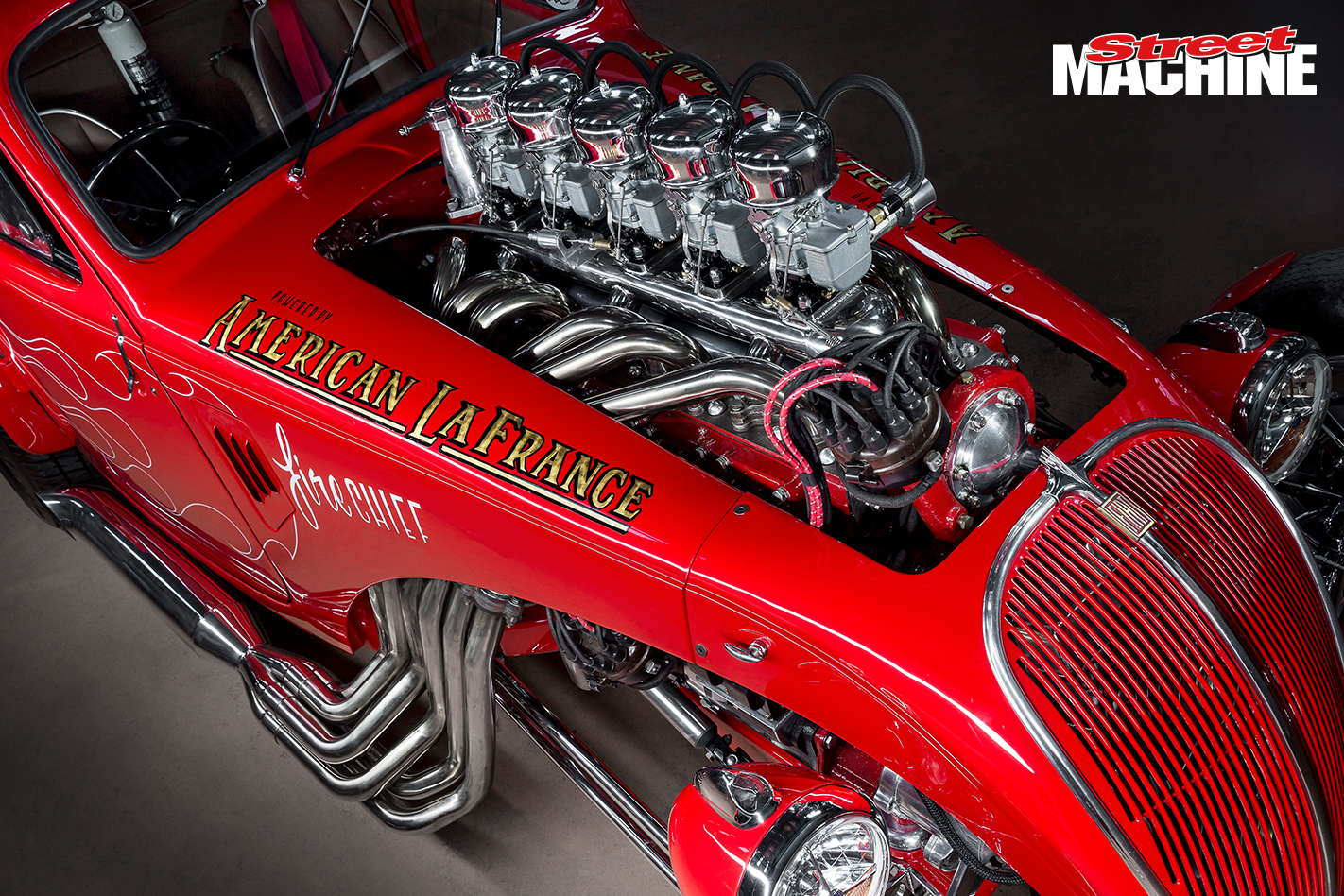 “They pulled this one out of a retired original truck for me,” says Rod. “I was worried about the engine landing in Australia missing impossible-to-find pieces. So, I was very clear with them, it needed to be 100 percent complete and completely reconditioned. I also wanted it to look like new, with as many new parts as possible. Because it was going into a showpiece, all the important stuff like the finned alloy sump, bell housing and such couldn’t be bashed about. I also got them to fully detail it so that I didn’t have to pull it down.”

Sourcing those 16x15-inch Halibrand rear wheels was not so straightforward. Despite being rarer than rocking-horse-dung, Rod used devious means to track down a genuine set that had never been fitted to a car. They had recently traded on eBay with the new owner all too aware of what treasures he possessed. He was sympathetic to Rod’s plight and was willing to sell, however it quickly became obvious that if Rod wanted them, he was going to be paying. 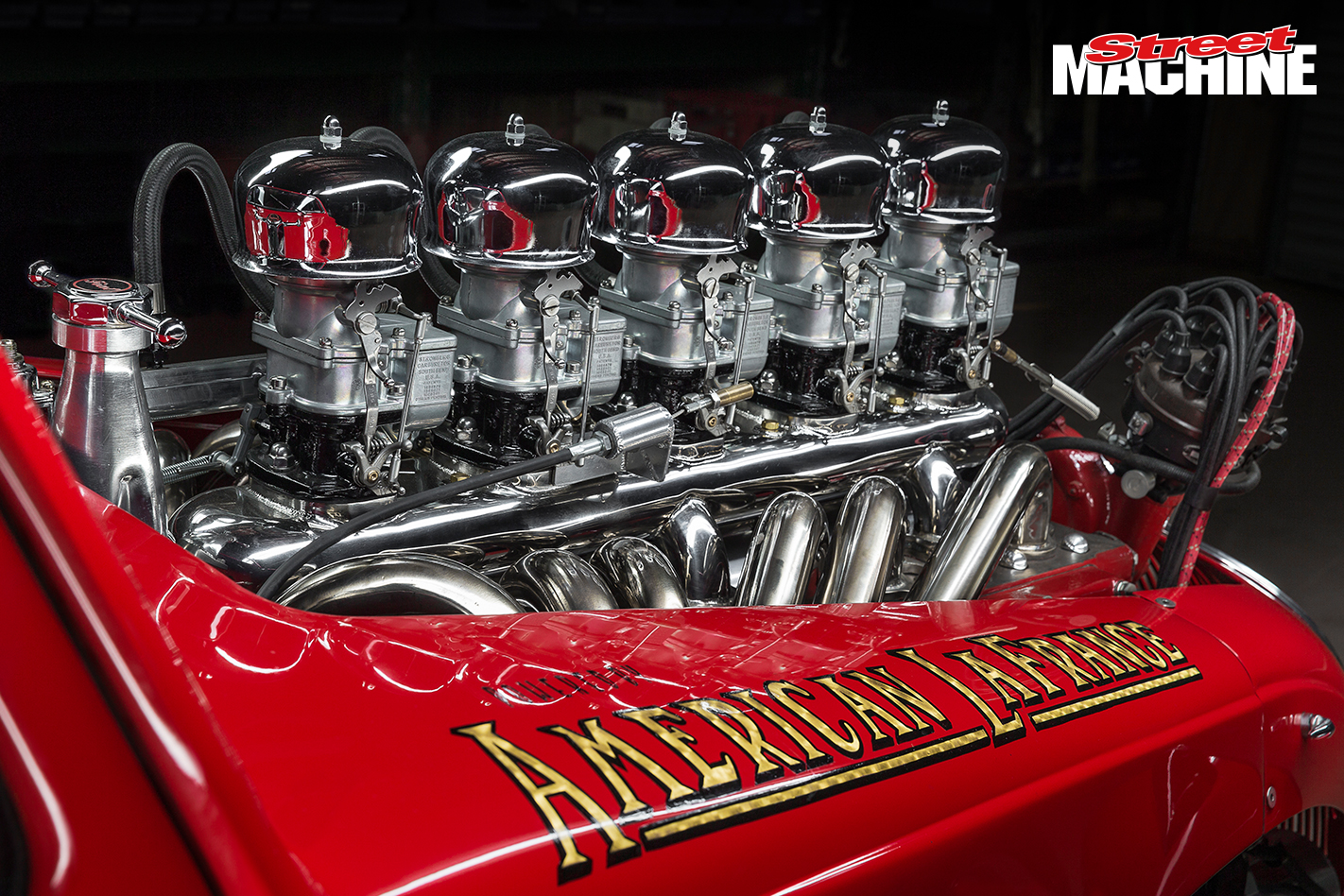 Oh, yes, the seller was based in Dallas, Texas and refused to ship them to Australia. “No problem,” said Rod, “I’ll fly over and pick ’em up!” During the trip, Rod also dropped into the Fire Museum to pick up his freshly finished engine.

“This whole process of the getting the engine restored and tracking down the wheels took two years, says Rod. “Now that I had them I could actually start building. Only then did I go out and buy the Topolino.” 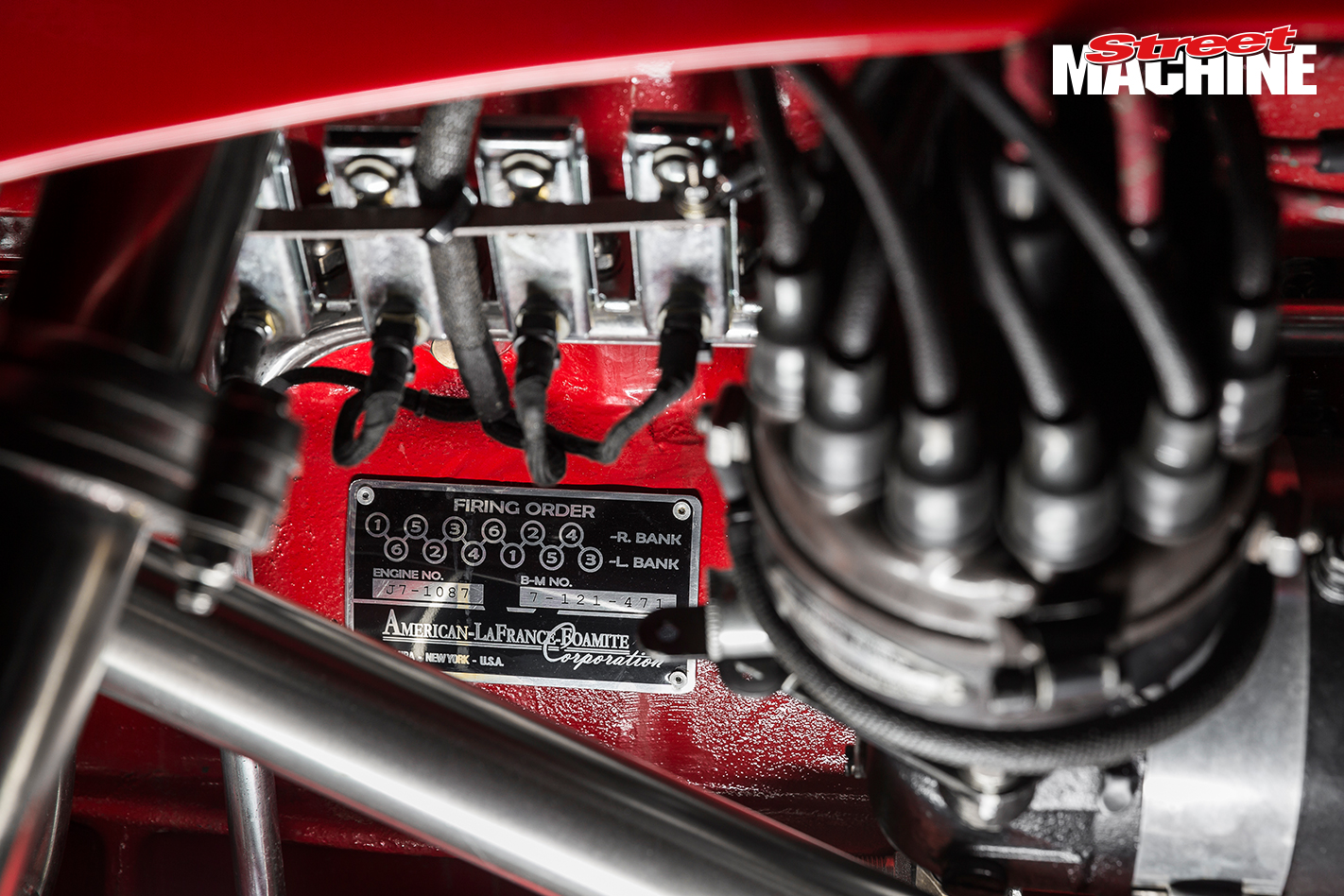 Instead of starting with a basket case, Rod bought the best car he could find. After stripping it down, he sold off everything not needed, including the chassis, engine, driveline and rear guards. “It was all in such good nick, I pretty much got my money back,” says Rod.

Of the half million-plus Topolinos sold between 1936 and 1955, most were rag-tops; this car was a rare hard-top coupe. To go from inline-four to V12 required stretching the nose 14 inches. 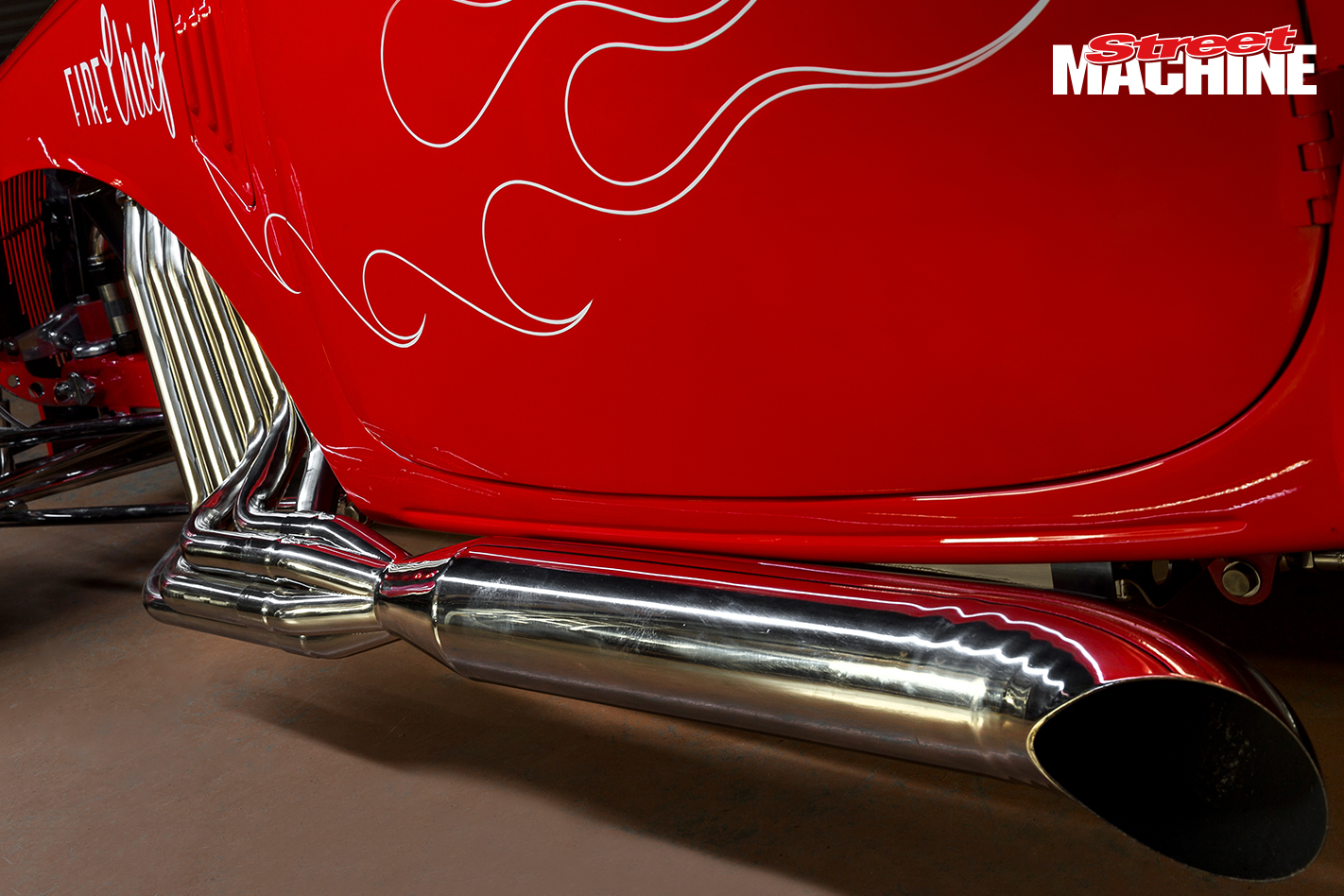 “I didn’t want it to be obvious the car was fitted with hulking great V12,” says Rod, “it was important to me to keep the proportions right.” Helping maintain those proportions is a 10-inch firewall set-back.

Another styling element that Rod went to a lot of trouble to keep in proportion was the hand-made rear guards. When released, the Topolino was one of the world’s smallest cars, with tyres somewhat smaller than the monstrous 31x16.50R16 Pro Street Hoosiers which Fire Chief now wears. The new guards and hand-built rear decklid (with imitation spare wheel cover) were made to blend in with each other – they look like they belong. 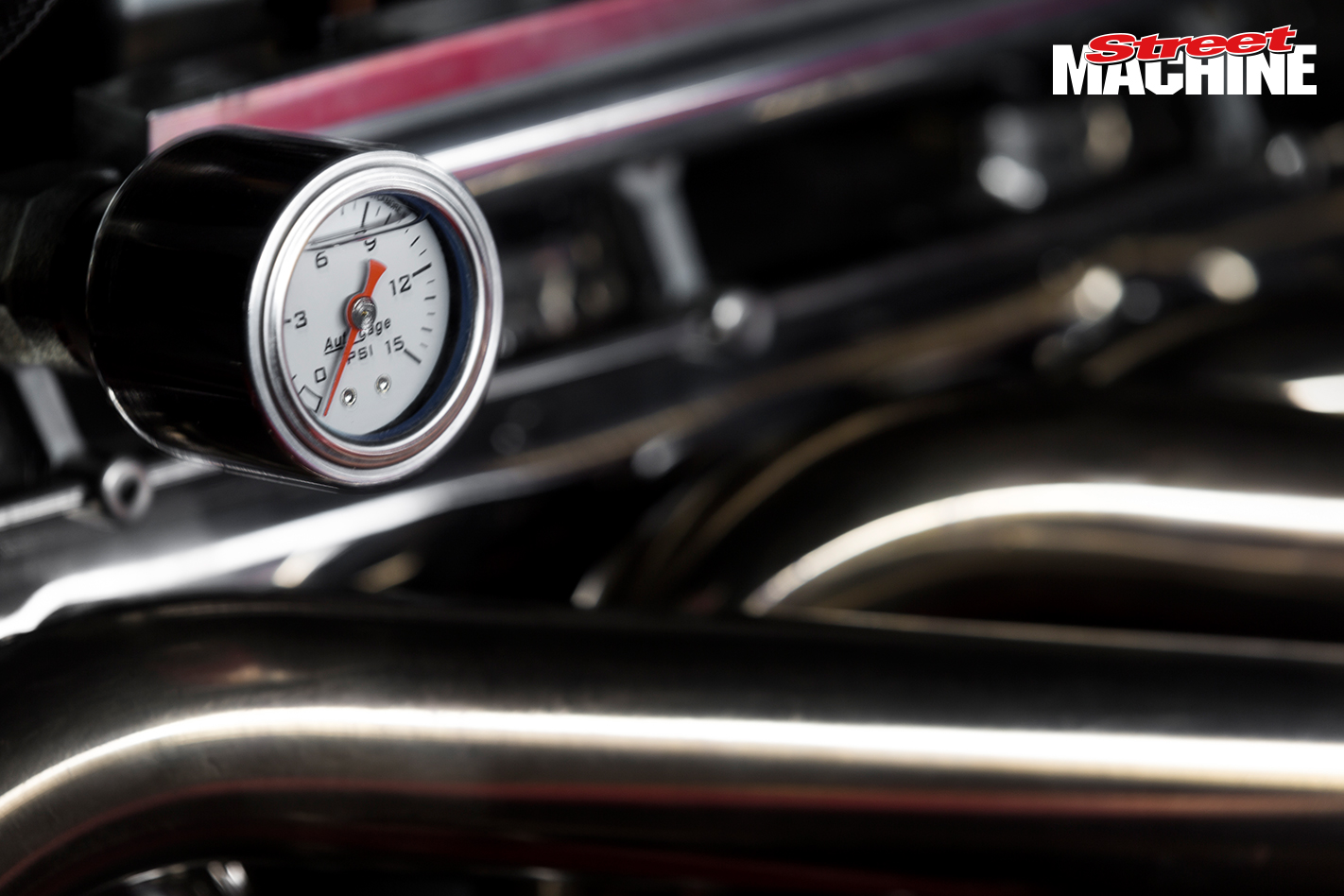 The cascading headers were an absolute labour of love, which Rod worked on every day for two straight months. He raided the offcuts bin at Castle Auto Electrics, scoring himself some 80 to 90 bends. Many hours were spent cutting and welding to create the 12 neatly flowing pipes.

“The pipes were essentially made twice,” says Rod. “Once I had them sitting the way I wanted, Castle used them as templates to bend the final pipes in stainless, which I then hand polished.” 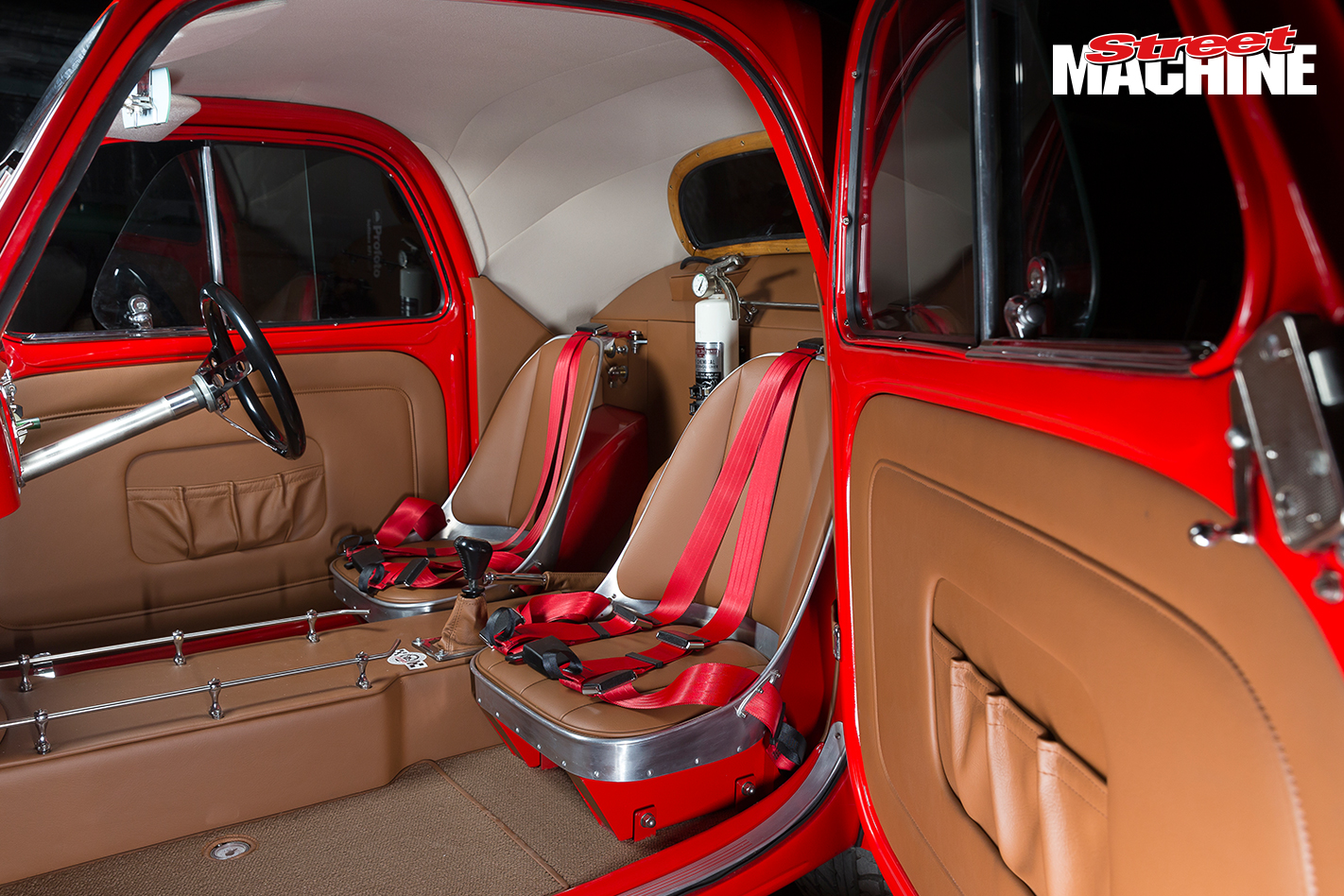 The LaFrance V12 is far from lightweight. Which is why Rod fashioned the all-new chassis to be just the right width for the factory engine mounts to sit on. And to take full advantage of the incredible torque and make up for the modest 4000rpm redline, Fire Chief is fitted with a dual over-drive ZF six-speed manual. The ZF butts up to the LaFrance bellhousing courtesy of an adaptor plate and drives through a Landcruiser 12-inch pressure plate. Although the diff ratio seems a bit stout at 4.7:1, keep in mind the rear hides are 31 inches tall. 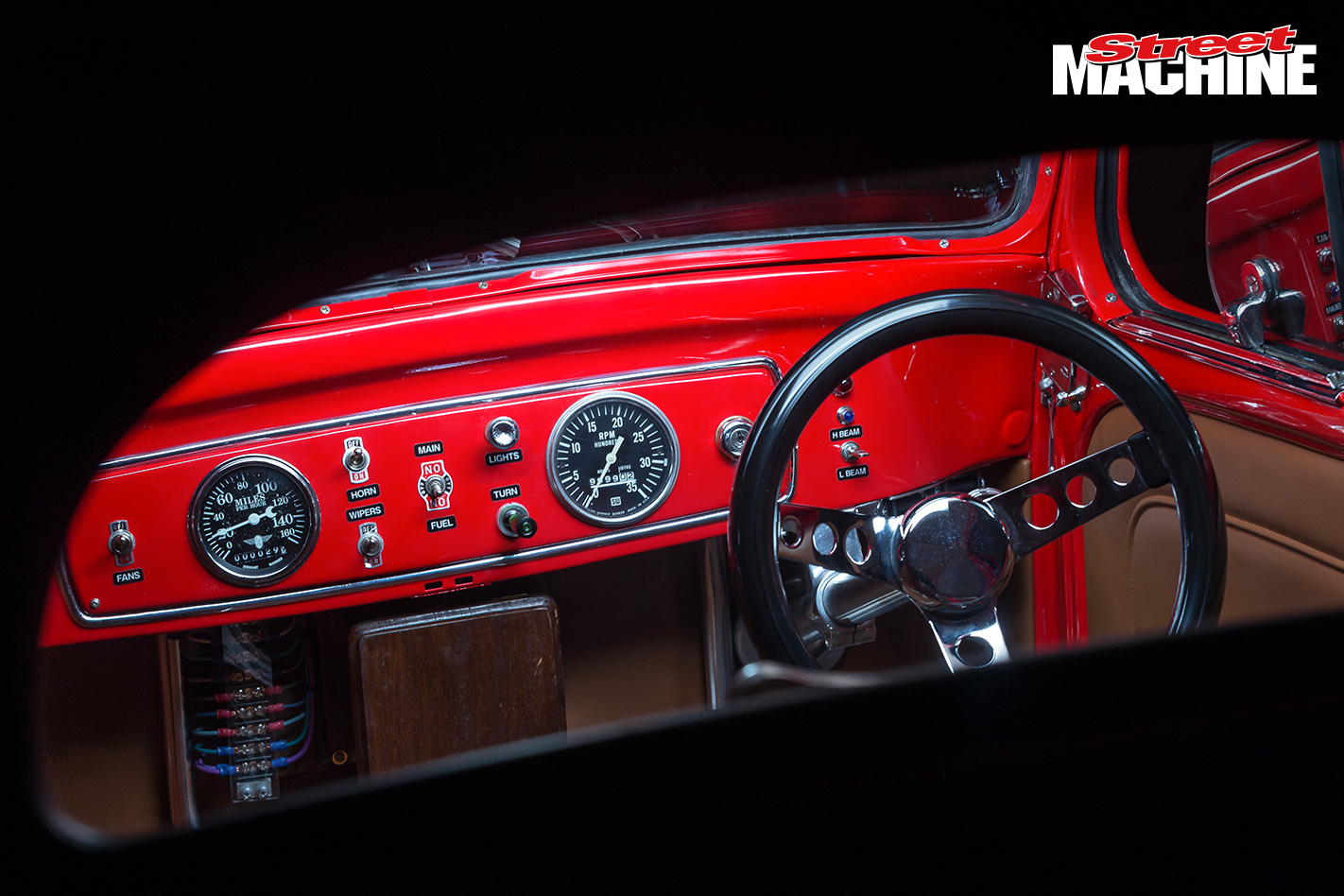 Hauling it all to stop are polished Wilwood four-spot calipers all ’round, with Wilwood discs out back (complete with integrated drum-style handbrake) and custom discs up front. A fabricated pedal actuates the system via dual Wilwood master cylinders. Front suspension is pure hot rod; chrome Super Bell four-inch drop axle, (the only legal chrome I-Beam), four-bar, plus both friction and motorcycle shocks. With an engine that runs from rail to rail, Rod was forced to flip a left-hand drive Vega steering box and mount it on the outside of the rail – which works quite well. 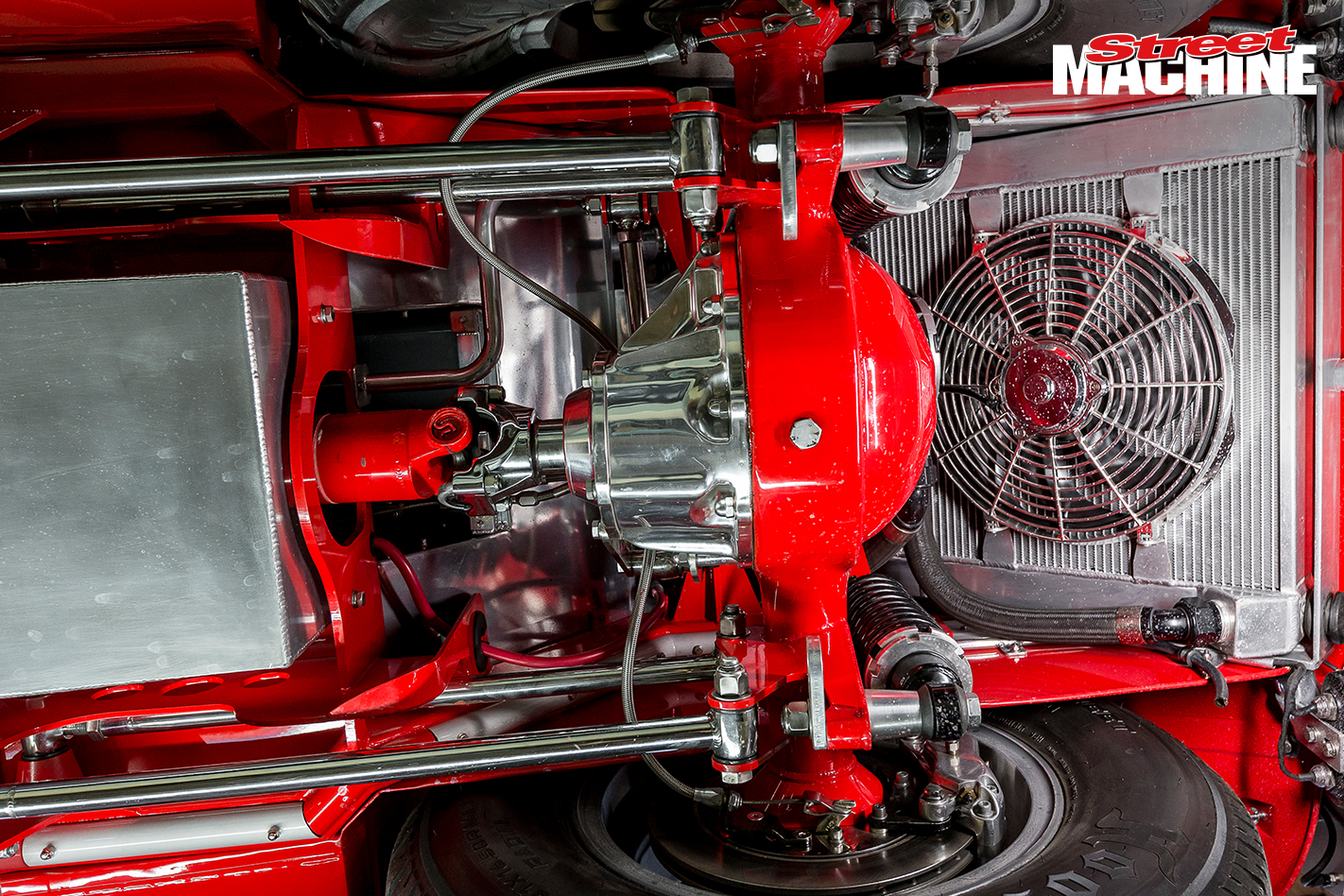 Cooling was always going to be a challenge. There are two 16-inch fans on the rear-mounted radiator, and another two fans on the smaller radiator up front. Rod turned the actual chassis rails into coolant pipes (which runs a high percentage of coolant to avoid corrosion), while the system is filled via the Fire-Hydrant looking water filler neck at the back of the engine. 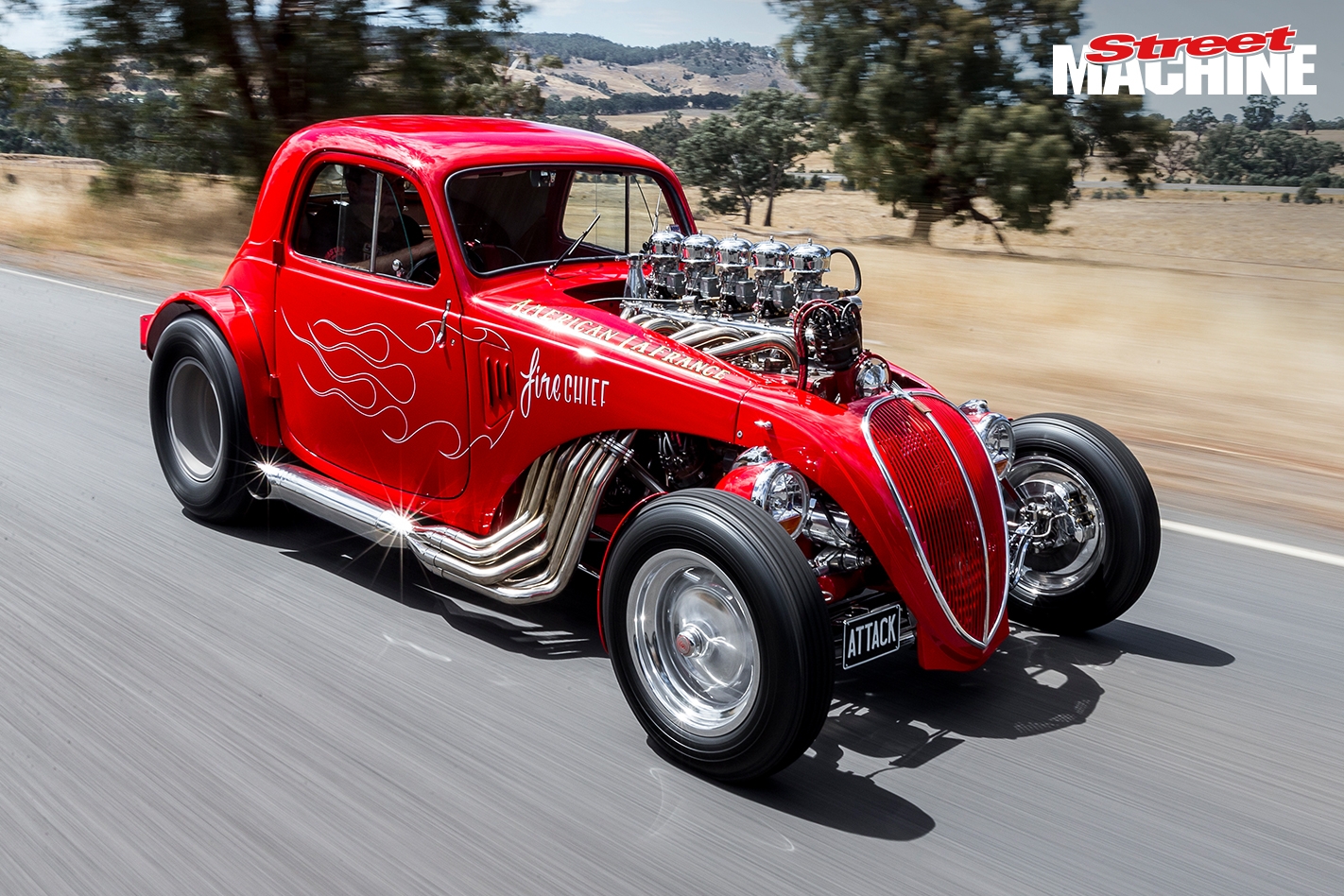 Although much of Fire Chief has been fabricated from scratch, it uses a host of reproduction parts. “New door and windscreen rubbers, window tracks, along with door latches and handles. It’s amazing what you can buy for it,” says Rod, “Despite being an Italian car, the company that makes all the repro gear is based in Switzerland.” 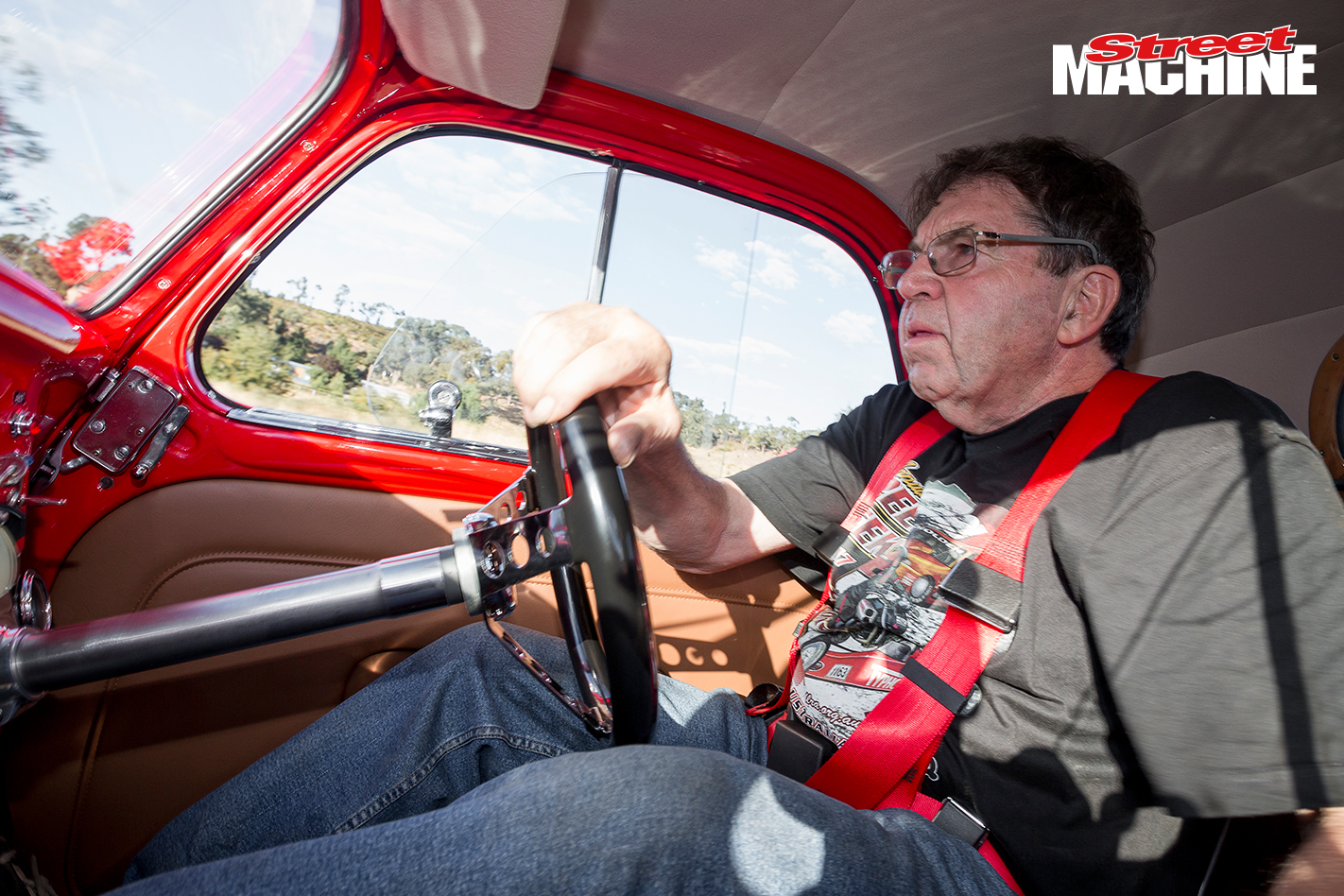 Wherever possible the fire truck theme was used inside as well, most notable is the aluminium framed, LaFrance fire truck-inspired seats and LaFrance fire extinguisher. Other interesting details include rare Stewart Warner truck instruments (the tacho only reads to 3500rpm), vintage wooden Telecom box concealing the fuses, darkened window glass, fabricated sill protectors and a floor-mounted fuel gauge. And no fire truck would be complete without a 12-volt vintage Klaxon horn!

As for the colour? No prizes for guessing – Fire Engine Red. Rod says, “I asked House of Kolor to mix me the reddest red they could!” 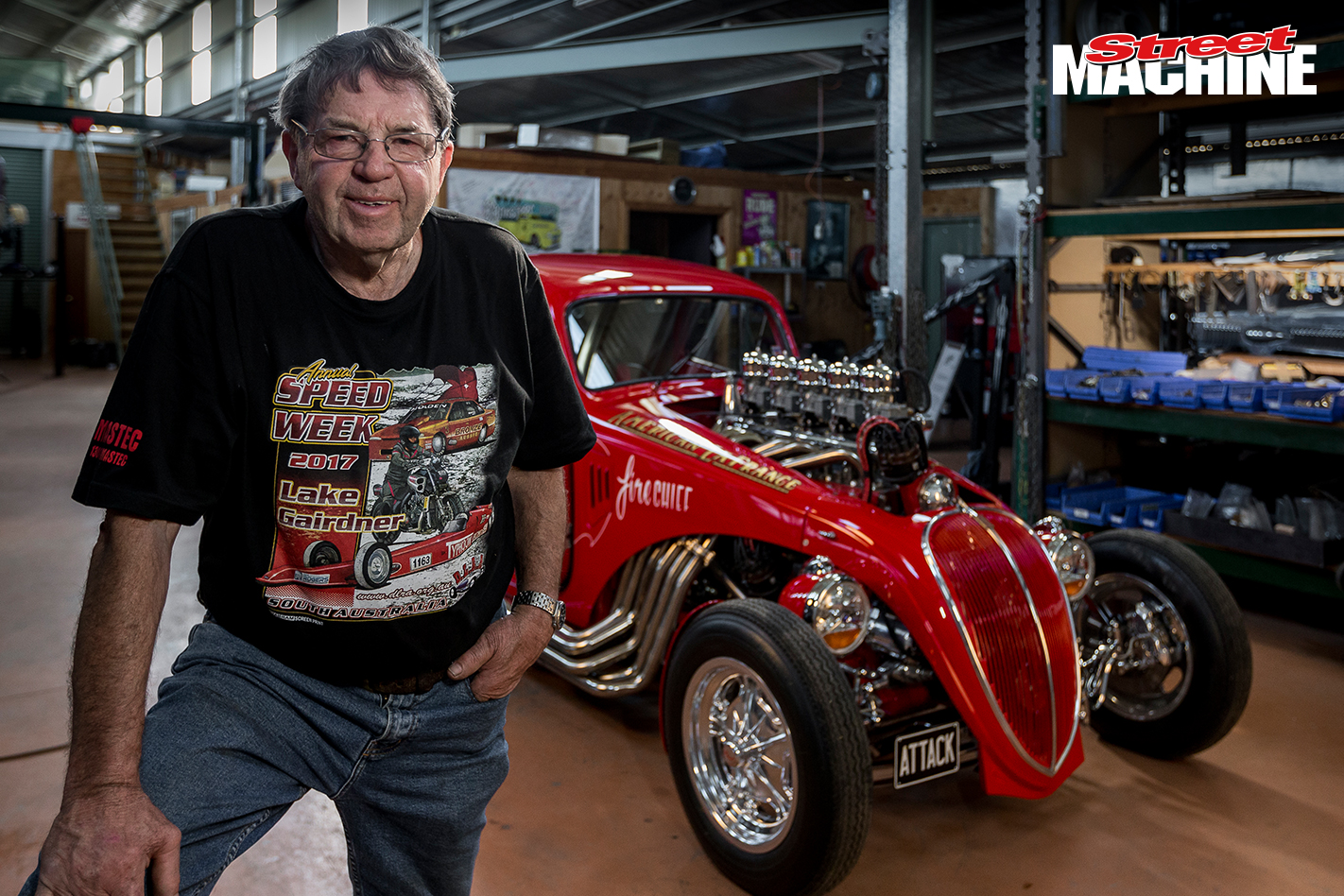 And for those wondering what Fire Chief is like to drive… “Like any LaFrance V12 powered Topolino, of course” says Rod. Naturally…