Looking back on Rod Hadfield's Warman Special, the ultimate tribute to the man who inspired his life's work

Rod Hadfield has built some amazing rides. The Warman Special started it all for him, when he was just a nipper

BACK in 1932, if you’d wanted to build a really fast car you’d have created something very much like the machine shown here. The idea was to get the biggest engine you could find — usually from a fighter plane or a tank — fit it to a chassis and build your own body around it. Then you’d take it out to a beach to test it out, running upwards of 300km/h with spindly wheels, mechancial brakes and almost no safety gear. 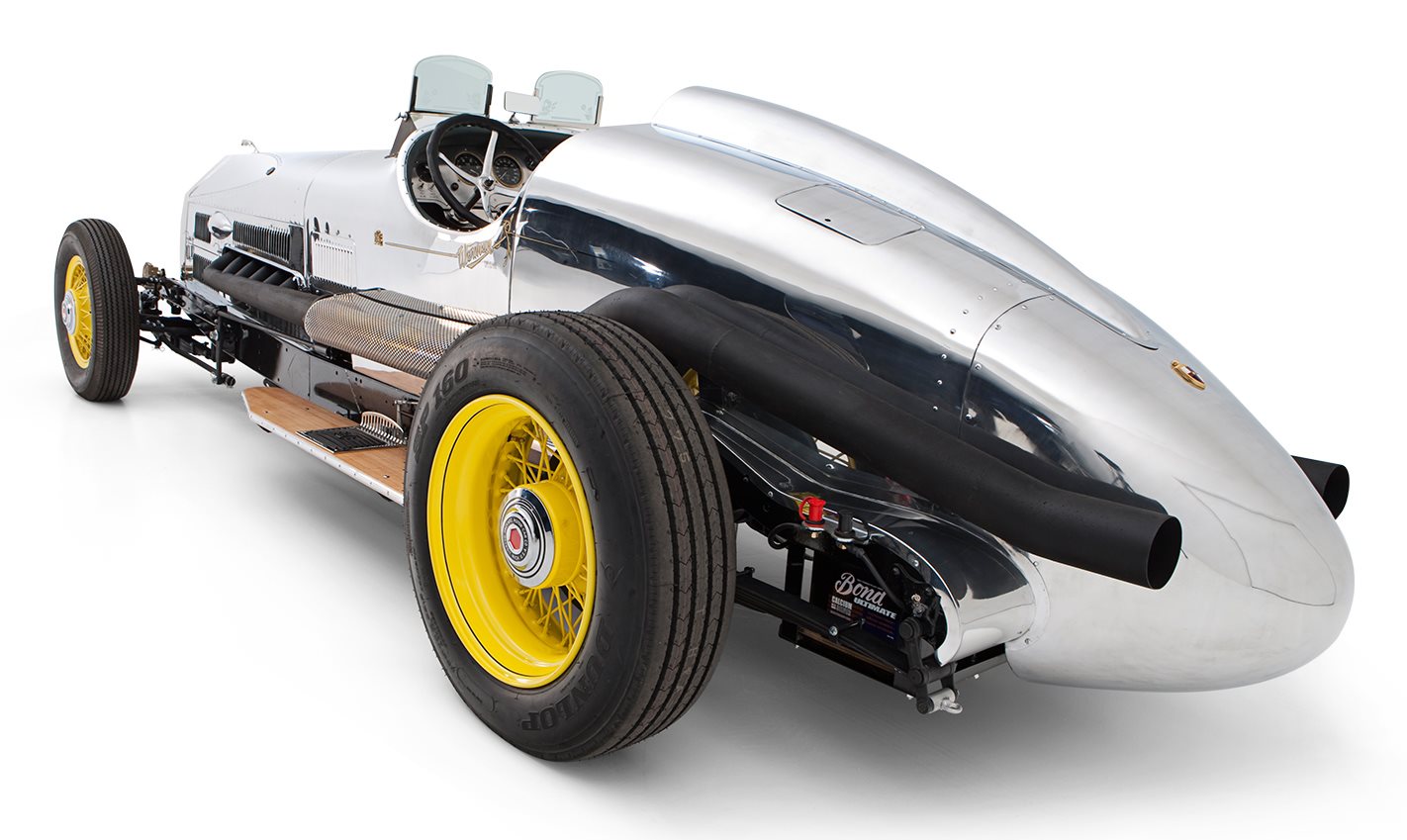 Such cars were raced by blokes like Sir Malcolm Campbell, Henry Seagrave and John Parry-Thomas — genuine heroes and innovators of the age, who often paid the ultimate price.

Most of this action was centred in Britain but news of their exploits reached all corners of the earth, including the Melbourne suburb of Camberwell, where a bloke named Ray Warman was inspired to build a stainless steel model of one of these beach racers at his kitchen table, with his daughter watching on. That young girl would one day grow up to be the mother of an innovator of the modern age; Rod Hadfield. 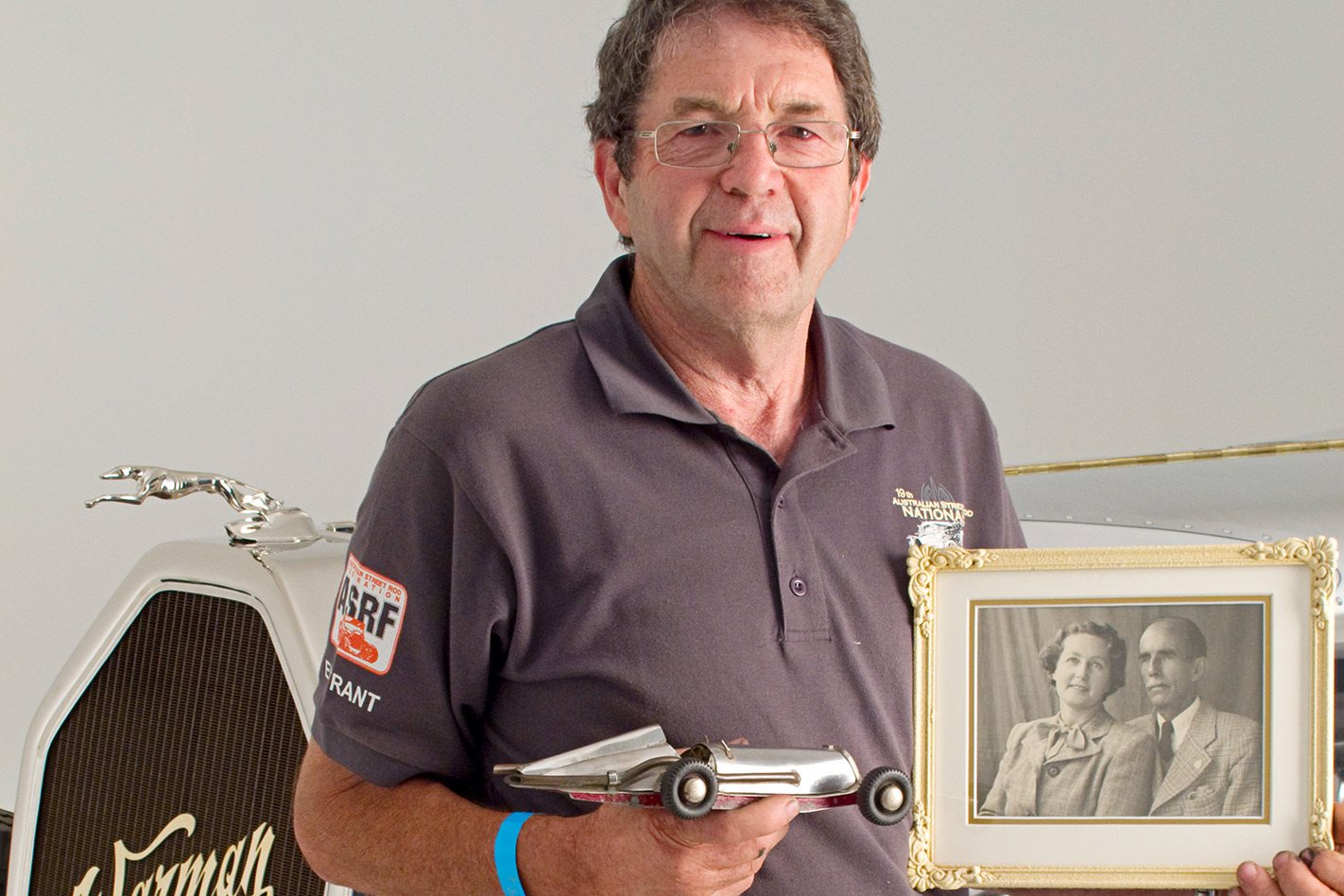 “I remember always wanting to go around to my grandfather’s house to look at the model but I was never allowed to touch it,” Rod laughs. “My grandfather was a real car guy but it wasn’t an easy hobby to get into when you were trying to raise a family during the Great Depression.”

“Later the family moved to the country and Ray was able to start playing with cars. He always had something different and he always tinkered with them, put on wide wheels and lowered them. I remember when he put a set of chrome wires on his Triumph. That really blew my mind as a young bloke.”

Rod hamming up with wife Carol. “I thought I was done with polishing cars years ago, then this comes along,” Carol says

When Rod built his first street rod as a teenager — a ’34 five-window coupe — Ray watched the young lad’s desire to express himself and encouraged him to chase his dreams.

“Because I was from a small town, no-one else was into cars. My grandfather was the only person who really understood. When I took the car to the Melbourne Hot Rod show in 1965 and won three trophies he was rapt.” 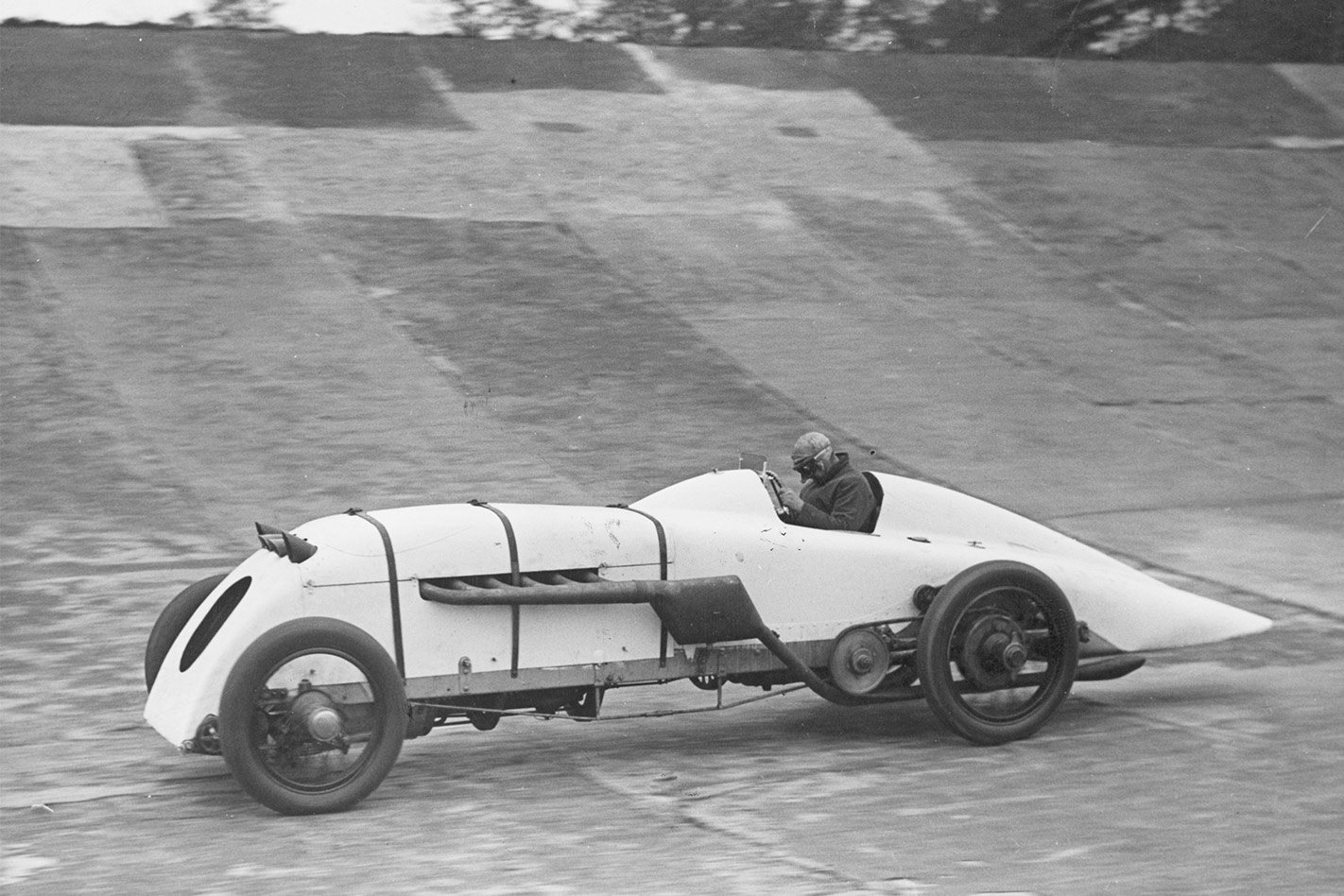 Rod went on to build a highly successful business, as well as numerous outstanding hot rods, street machines and race cars, but he never forgot about Ray’s model and as the new millennium approached, Rod felt he could do what he had long dreamed of — build a full-size version of the model as a tribute to his grandfather.

“It isn’t until you get to my age that you have the time to look back and appreciate what people may have done for you.”

Rod wanted to use parts from the 1930s, to give it a period feel. “Something like [Jay] Leno’s Blastolene looks similar but it has disc brakes and such. I wanted to build mine right.” 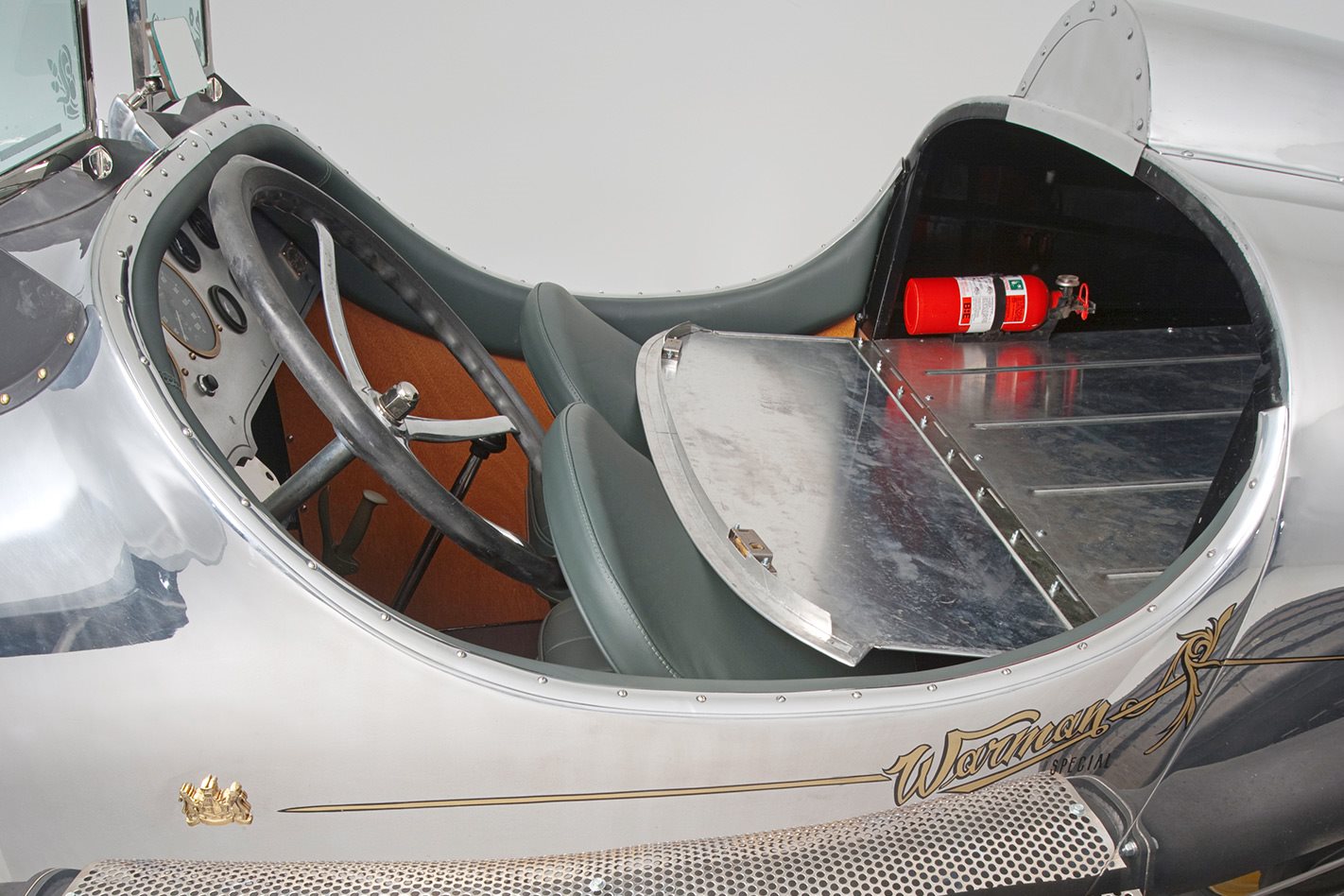 While it might seem overwhelming to create a car from scratch, Rod broke the project into parts. He found a chassis first and just kept going. “Do something every day, even if it’s only research, and you’ll get it done,” is his motto.

He started by looking at Cadillacs, Le Salles, Buicks, and others, until he decided that the Packard — one of the most expensive cars on earth in its day — had the right feel.

Finding the raw material wasn’t easy but in 2000 Rod located an Aussie who had brought in some parts from the US to restore a Packard Speedster. “To make the shipping easier, they bolted everthing to a ’32 Limo rolling chassis, so when he pulled off his bits, I bought the chassis.”

For an engine, Rod chose a 27-litre Rolls Royce Meteor V12, which was originally used to power Centurion tanks. 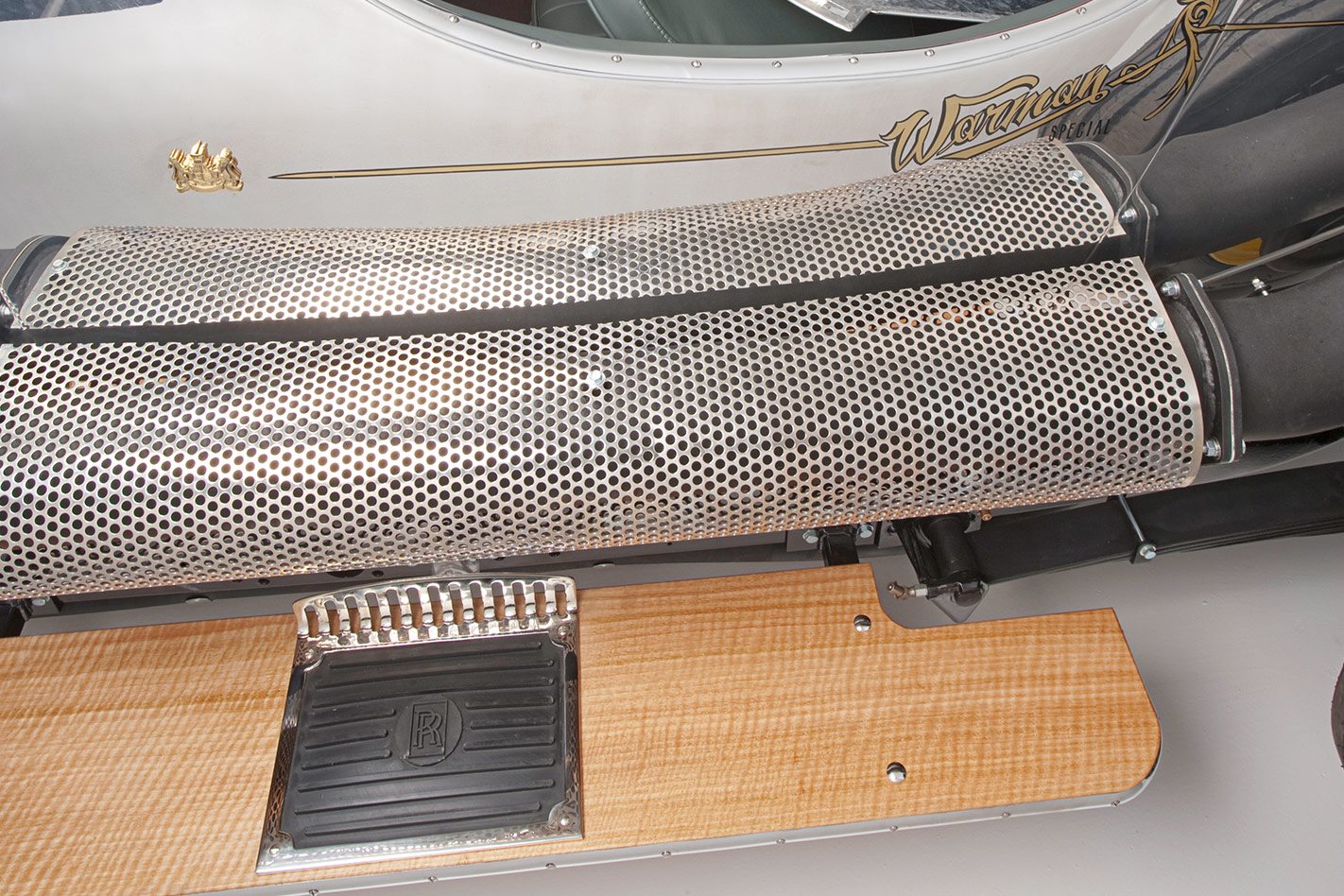 “I bought my first Meteor in the early 90s, from an ad in the Trading Post,” Rod says. “I had to hire a crane to lift it out over a block of flats!”

He gathered a few more over the years but the donk that’s in the car is a fully recoed unit from a government auction. It came with a receipt for £64,000 in ’63 from the Government Aircraft Corp! “Once we had it unpacked and hooked up, the engine started on the second go.”

“The Meteors were first built in 1932 and kept exactly the same specs for decades. They had a running life of 50 hours. That doesn’t sound like much but you’ve got to remember they had to pull a 50-ton tank!”

Using a dummy engine to start the process, Rod stretched the Packard chassis by 18in to keep the proportions nice. 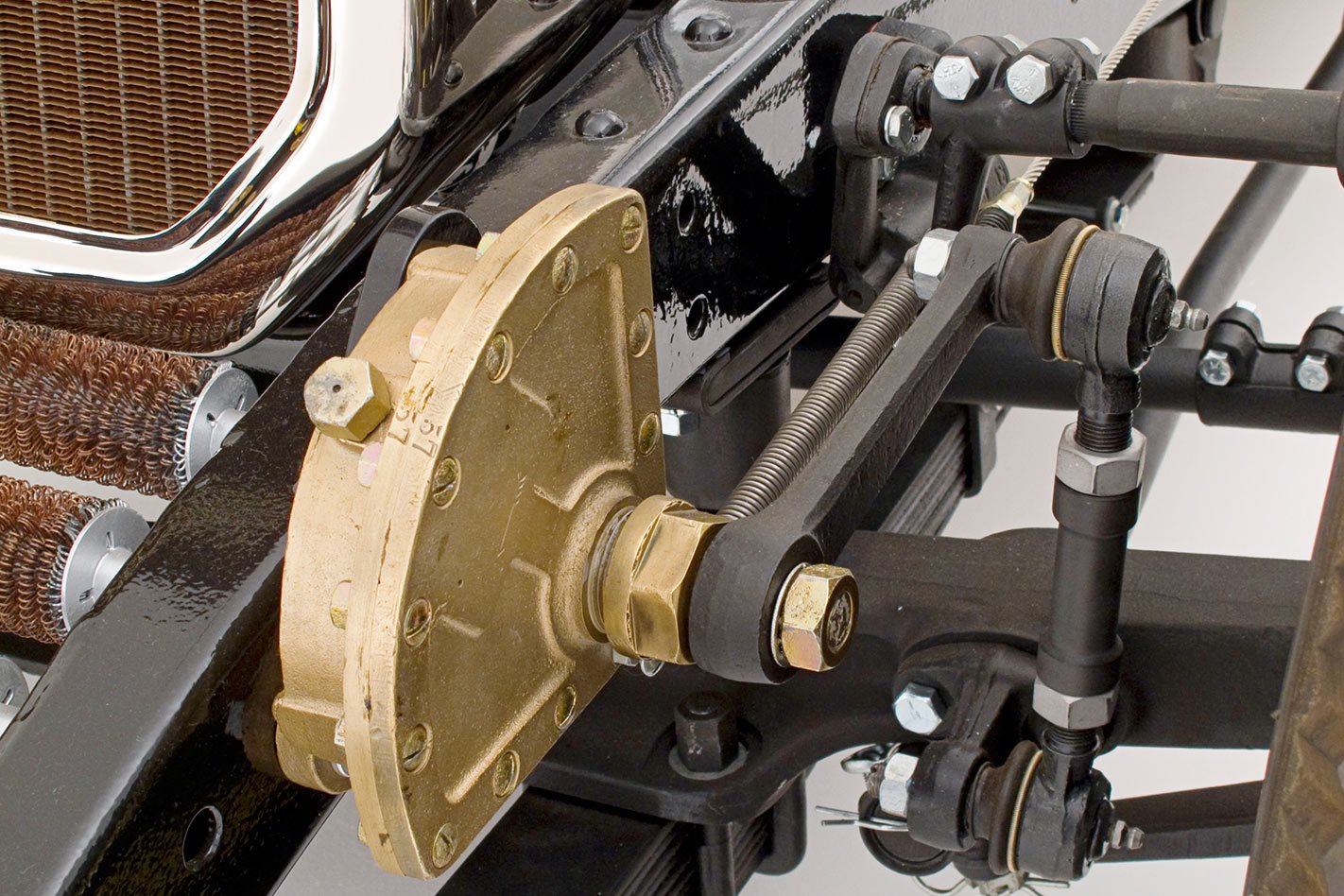 The wedge-shaped piece is one of the front shocks, which Rod says was a period aftermarket accessory

The next task was to come up with a grille shape similar to Ray’s original design. “I spotted a ’26 Stude grille and thought a larger version, proportional to the engine and the chassis would be a starting point,” Rod says. He then commissioned metal-man Tom Peach to roll up a surround to his specs, before it was nickle-plated.

As the Warman was always envisaged as fully driveable, Rod had to nut out how to put the power down to earth.

“The Meteor is a low-rpm engine. It makes 1550ft/lb at 1600rpm. That meant it would need an overdrive, so I adapted a Leyland bus five-speed ’box to it. I used an F250 transfer case in reverse, which gives us a theoretical top speed of 180mph. I wouldn’t like to try it on these tyres though!” The giant tank in the front of the engine bay is actually the oil filter!

He also had to incorporate some way of driving the generator and power steering, as the Meteor has no external drives — they were designed to run even submerged.

With the rolling chassis complete, Rod brought in master craftsman Mark Rye to build an aluminium body. Mark spent two years on it and has done a fantastic job, especially with the transition from the grille shape to the firewall. 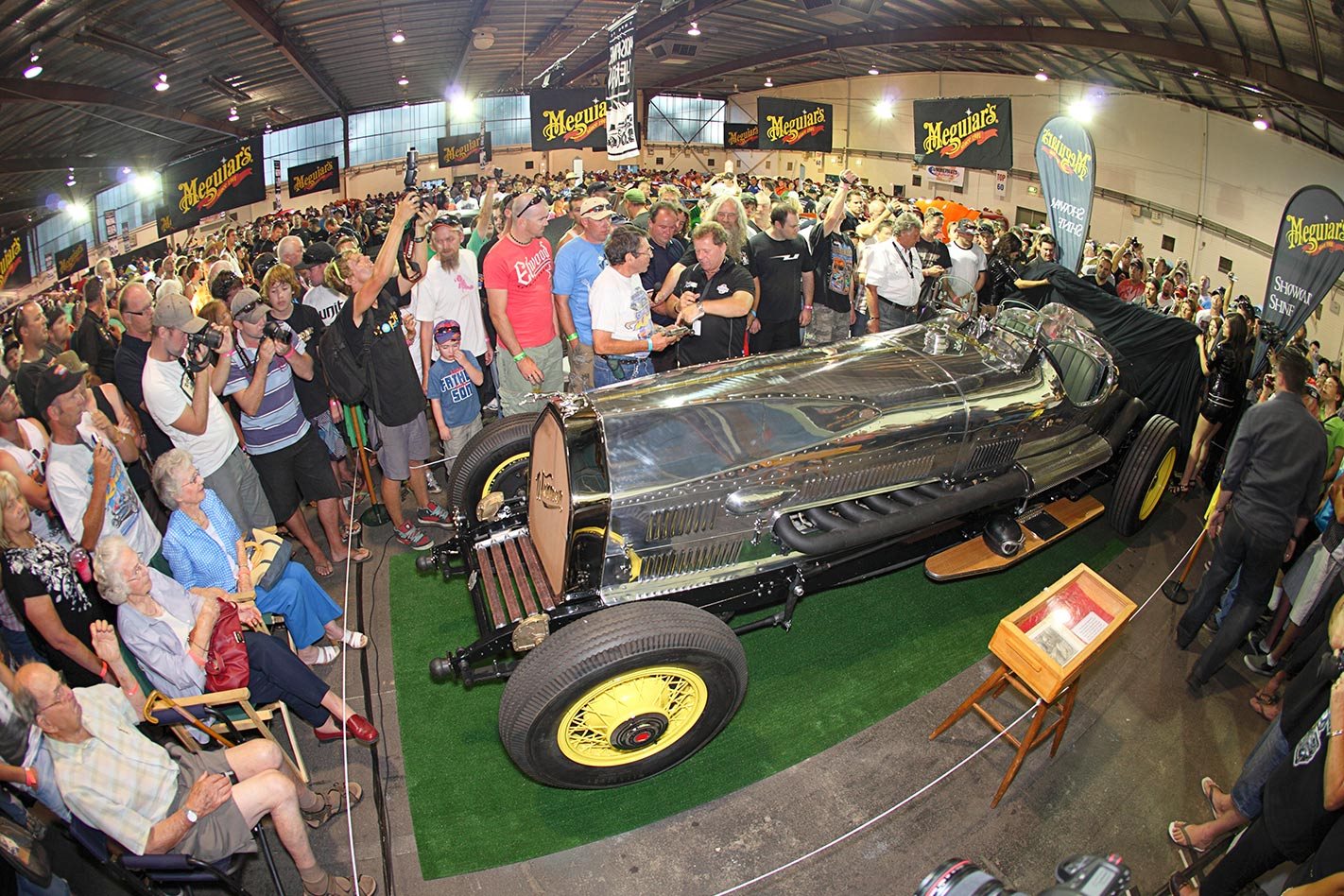 The Warman Special debuted at Summernats 23, with Rod’s parents and aunt in attendance. While the car is a long way from being a traditional street machine, it was very well received and Rod was awarded the Master Craftsman trophy

The Warman made a big splash at its debut at Summernats 23 and Rod was surprised at how well the car was received. “Everybody seemed to be able to relate to some aspect of it, be it the body, or the chassis or whatever they’re into.”

Not everyone got the concept, though: “A restorer came up and asked how many of these Warmans were made. I told him: ‘Just the one,’ and he went away to look it up.” 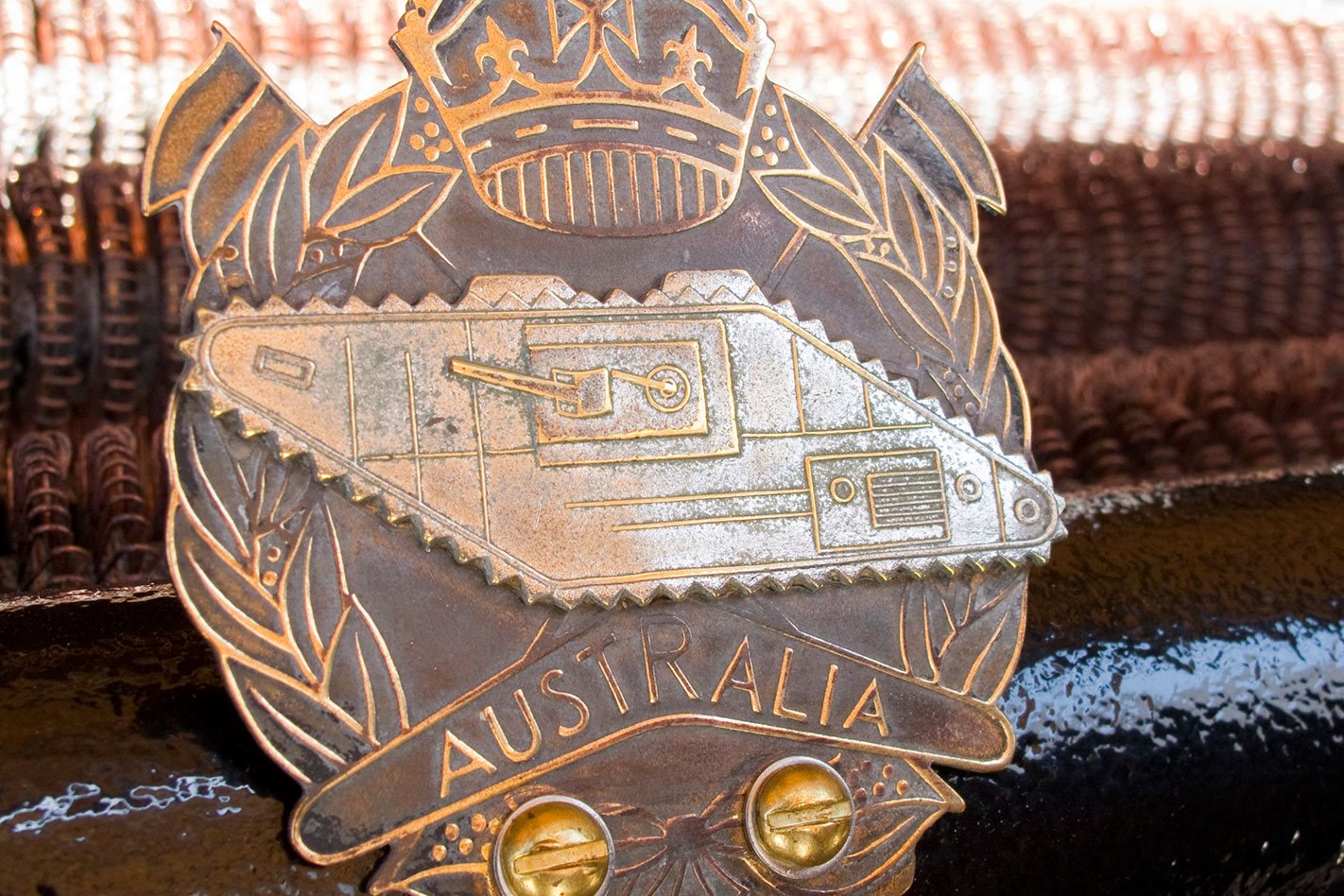 While our restorer friend wouldn’t have had much luck finding the Warman in the archives, the car looks like it’s from the early 1900s and would be at home on English beaches, Germany’s circuits or the board tracks of the US.

Best of all, the beast will be be used. “I want to take it to Phillip Island — it’ll look great out there. Then there’s the Maldon hillclimb and the Eddington Sprints, which is the longest-running sprint meeting in Oz. And those are just the events close to home — with a car like this, opportunities seem to just present themselves.” 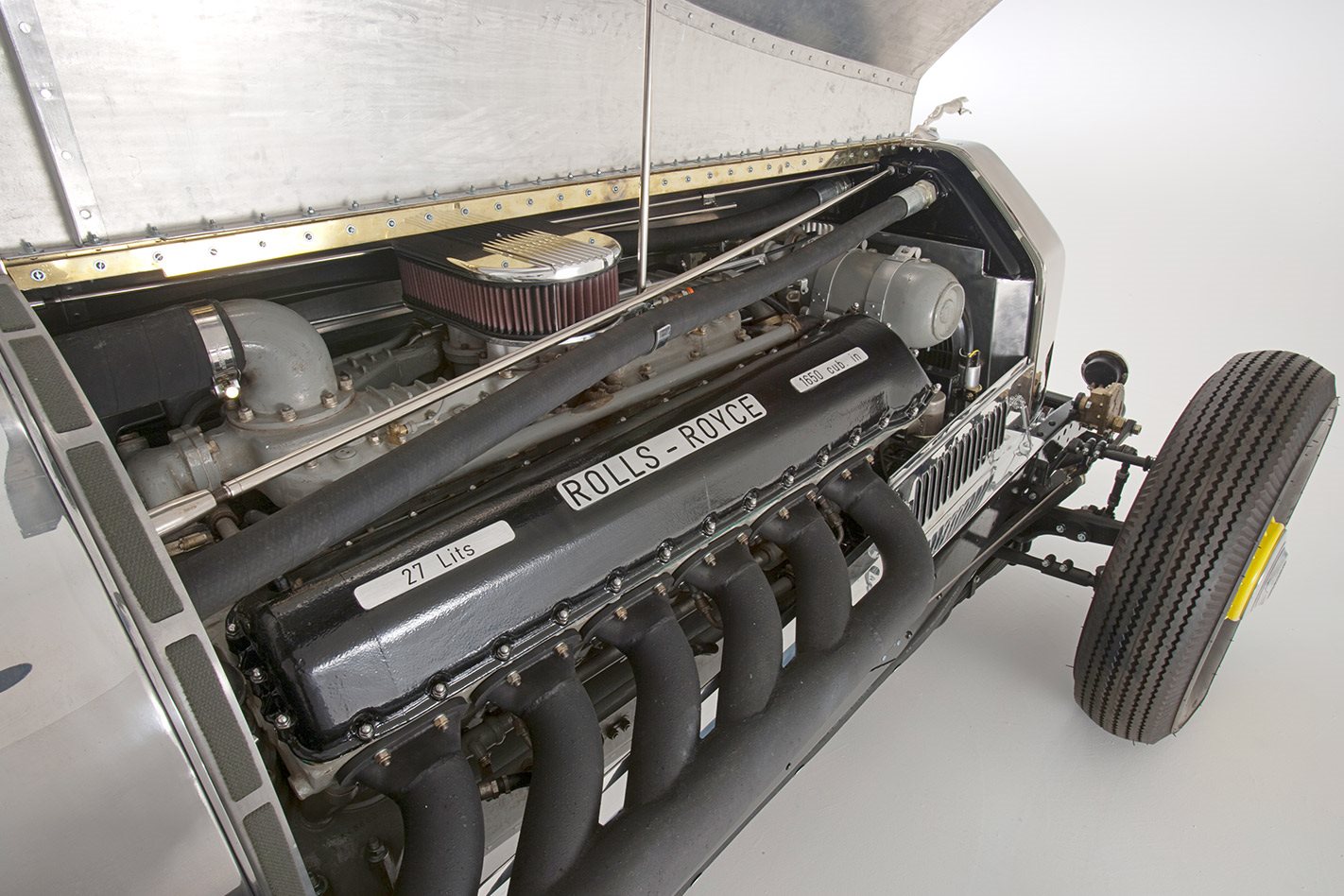 1. The motor is started on the 12 outer sparkplugs controlled by the right hand magneto — once running the left magneto is switched on, activating the 12 inside plugs and the beautiful sound of pure horsepower. A flooded mis-start requires a 22-hour ’plug change, not something to attempt on the side of the road! The manual also states all tools must be tied to the mechanic’s wrist, as it can be tricky to retrieve them from the bottom of the V where the twin 3in carbs live. 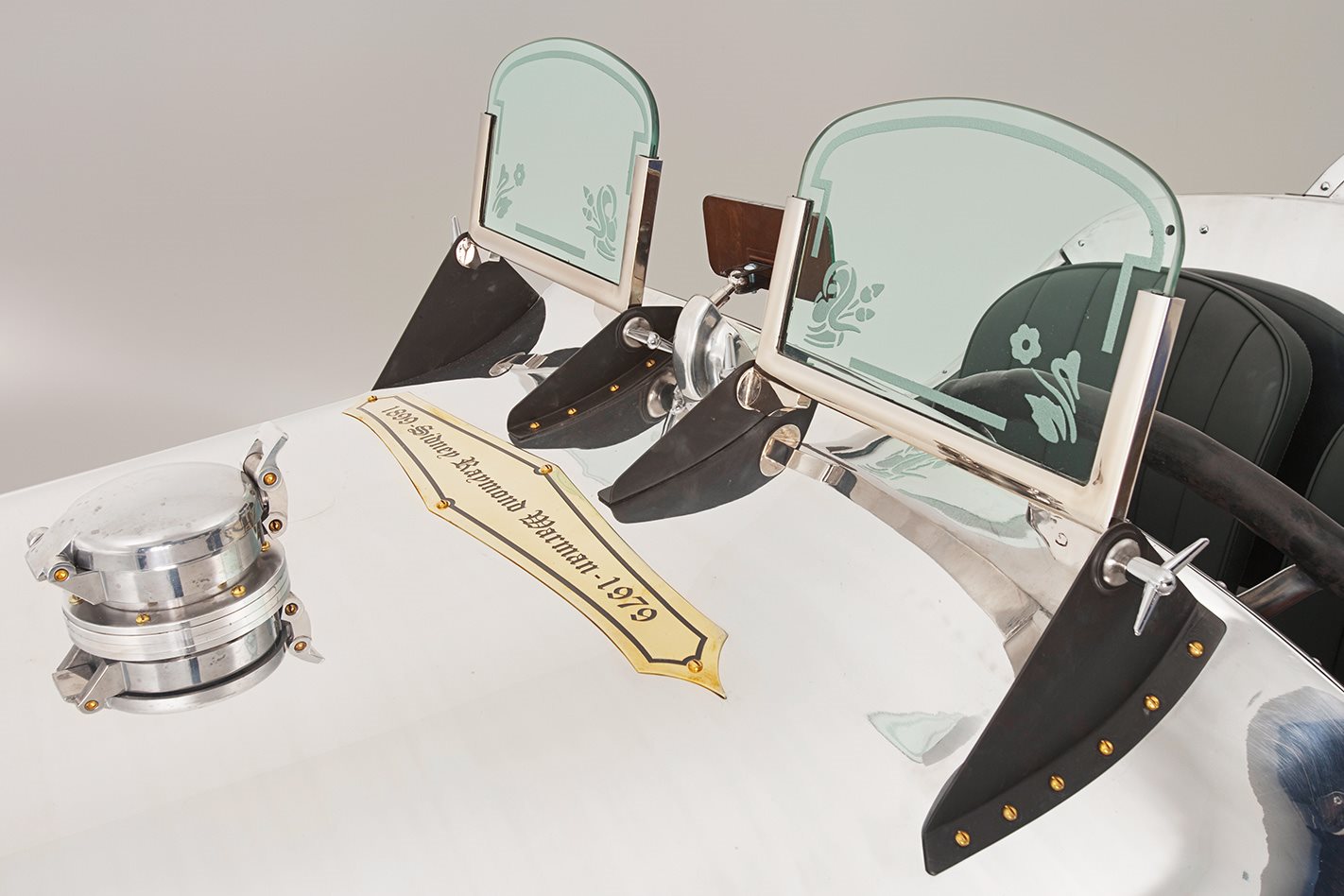 2. The whole cooling system is filled through the fake fuel filler just ahead of the tribute plaque on the cowl. Besides the Aussie Desert Cooler radiator, additional cooling is achieved by a large alloy rad mounted under the cowl, with two 16in thermos pulling cool air through the louvred side vents, then exhausting it through the floor. 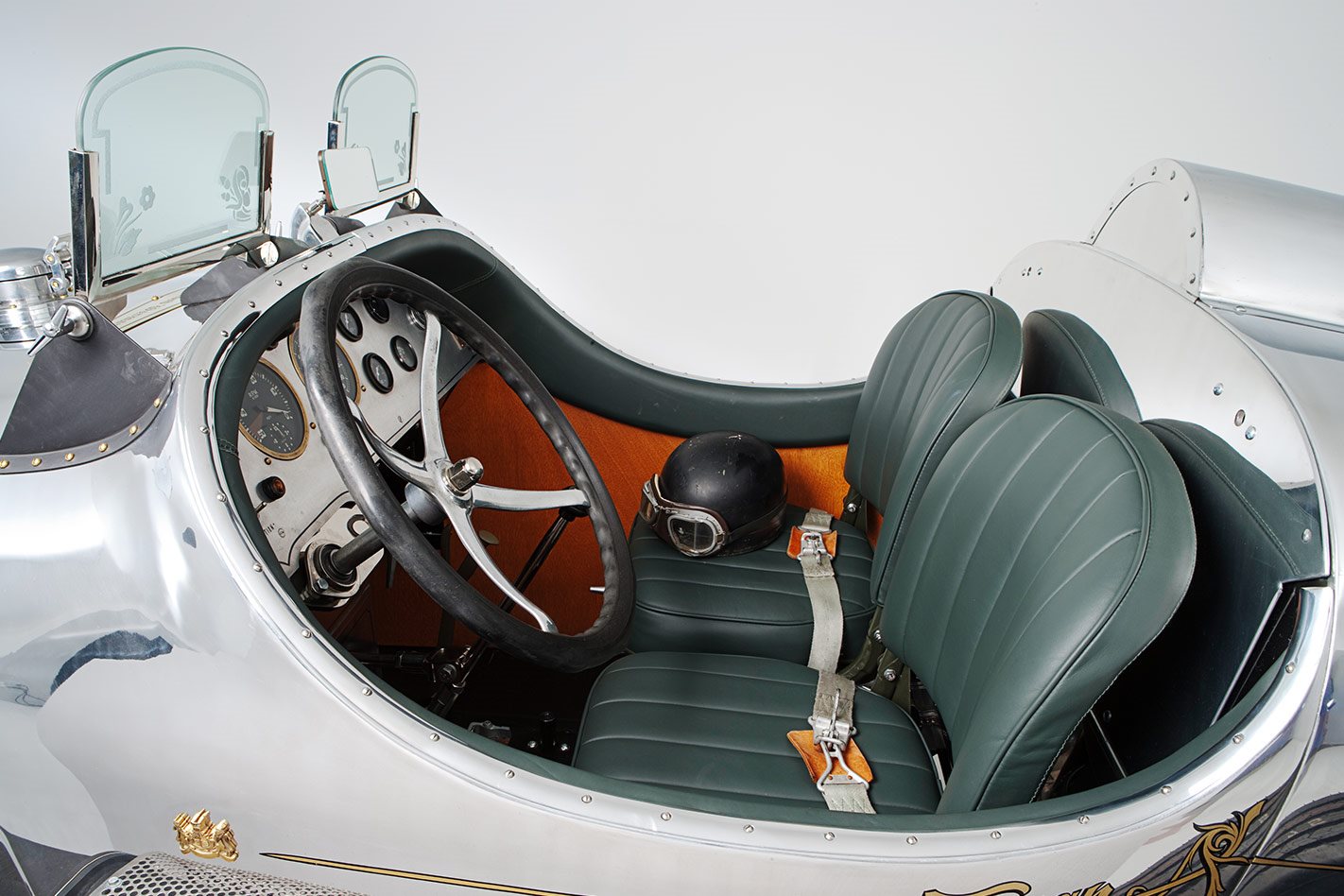 3. The Bentley Green leather-covered seats are from a Bren Gun Carrier; early Jag speedo and tacho blend with the older style switches, dash lights and other gauges. Wooden panelling again makes for a vintage effect, blending into the leather-covered padding surrounding the interior. The period tiller is a swap-meet mystery purchase. Rod made a ‘fold to the side’ mechanism to allow easy access from the running boards H: As the Meteor engine is dry sumped, Rod needed an external oil cooler, and found that this early unit fitted into the space in front of the grille. 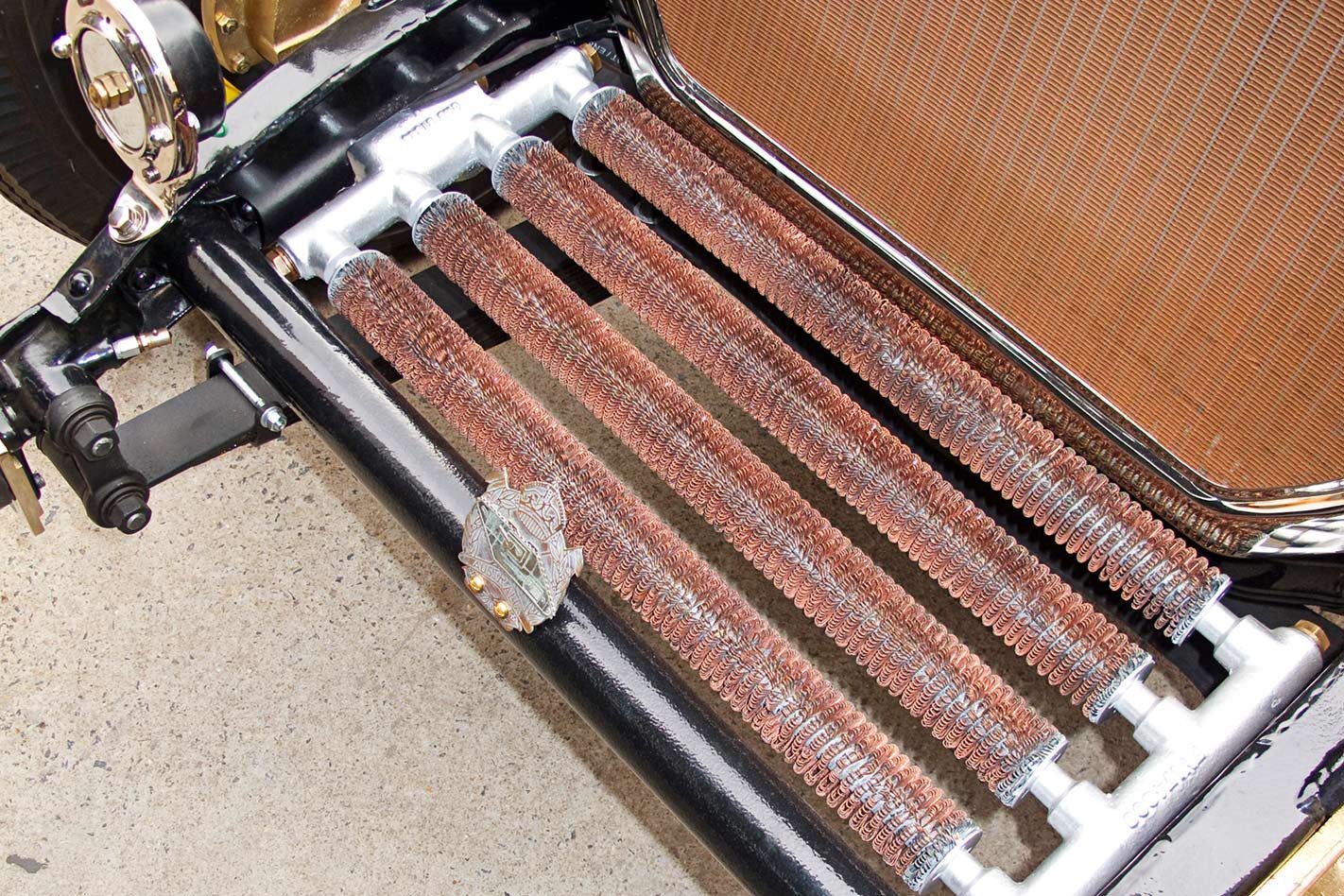 4. As the Meteor engine is dry sumped, Rod needed an external oil cooler, and found that this early unit fitted into the space in front of the grille. 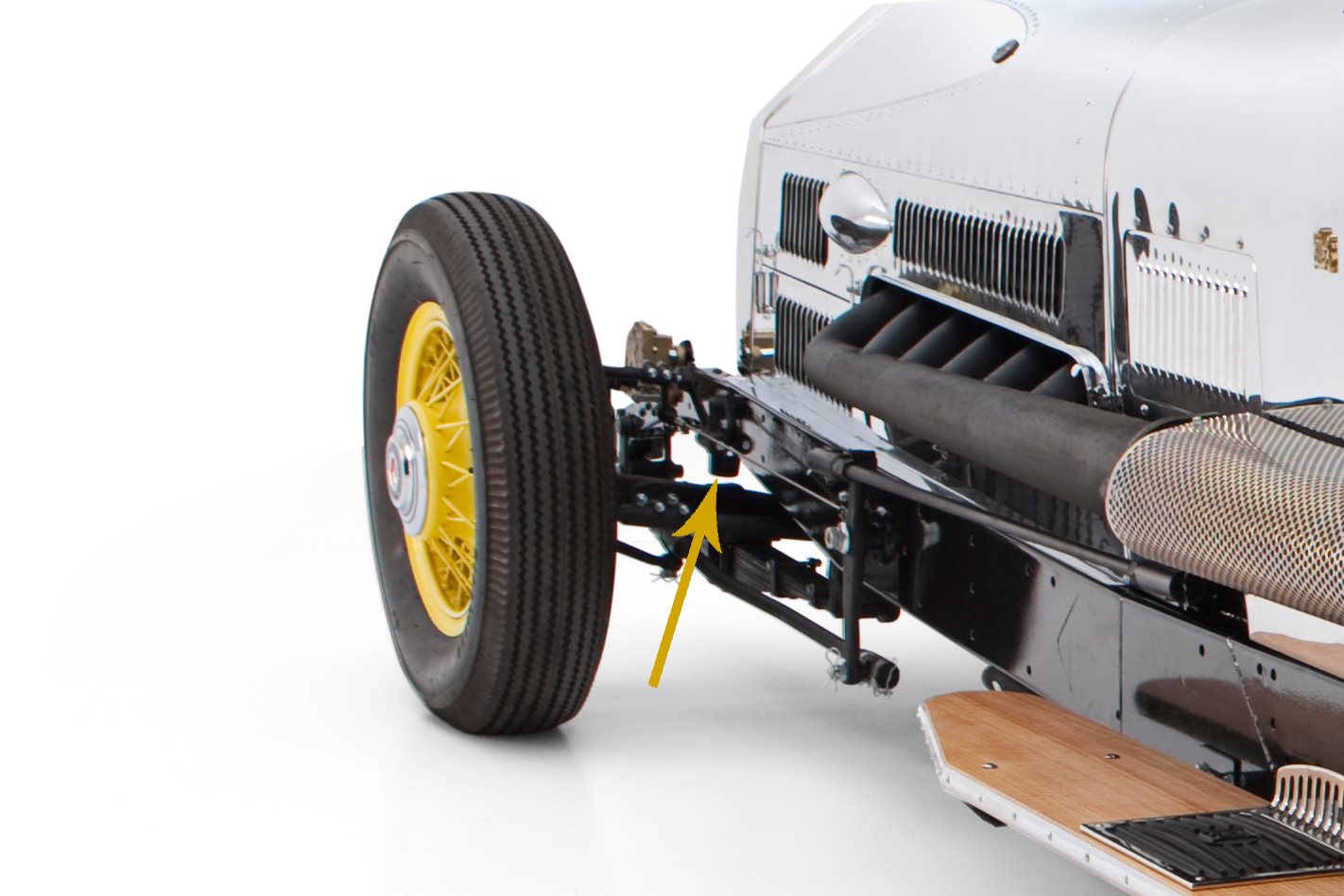 5. The braking system is a masterpiece of engineering. A J-series Bedford pedal assembly is used to activate a Dodge truck master cylinder, which feeds two HK Holden V8 slave cylinders, one at each end of a cross-shaft, which has levers that pull the cable-operated front brakes while the levers visible on the outside of the chassis go to rods operating the rear brakes. 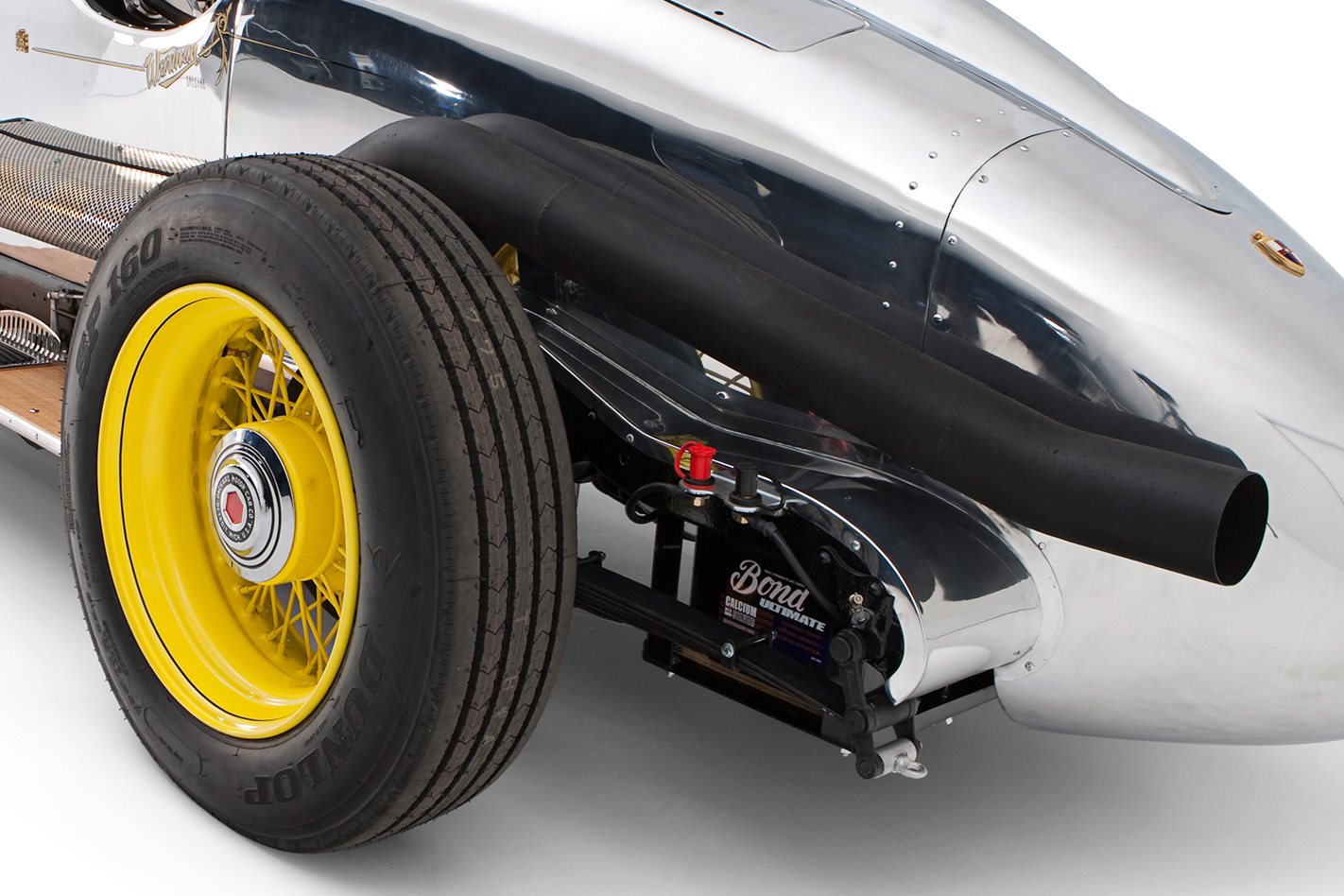 6. The 6mm-thick truck rims had to be heated with an oxy torch prior to the dimpling and drilling to accept the custom-made spokes — a massive job. Rod built the full exhaust, which ends up in five-inch straight-through pipes. 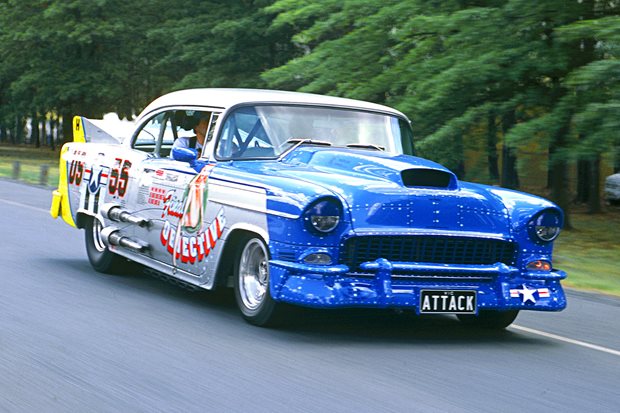