AS THE crow flies, it’s about 600km to the nearest beach, so you’ve got to wonder what a vehicle like this is doing out in the high desert of Utah. Dubbed Surf Seeker, this cartoony take on a ’65 VW Bus might not make too many trips to the Southern Californian surf breaks, but it sure is a hit on the car show circuit. The artist that created this rolling sculpture is Ron Berry, and while he spends his time these days in a much less crowded part of the world, he was born and raised in SoCal and spent a lot of his youth around Redondo Beach. “It got so hectic and it really wasn’t fun anymore,” he says of his decision to leave. “California just lost it with all the population, it’s just overrun. 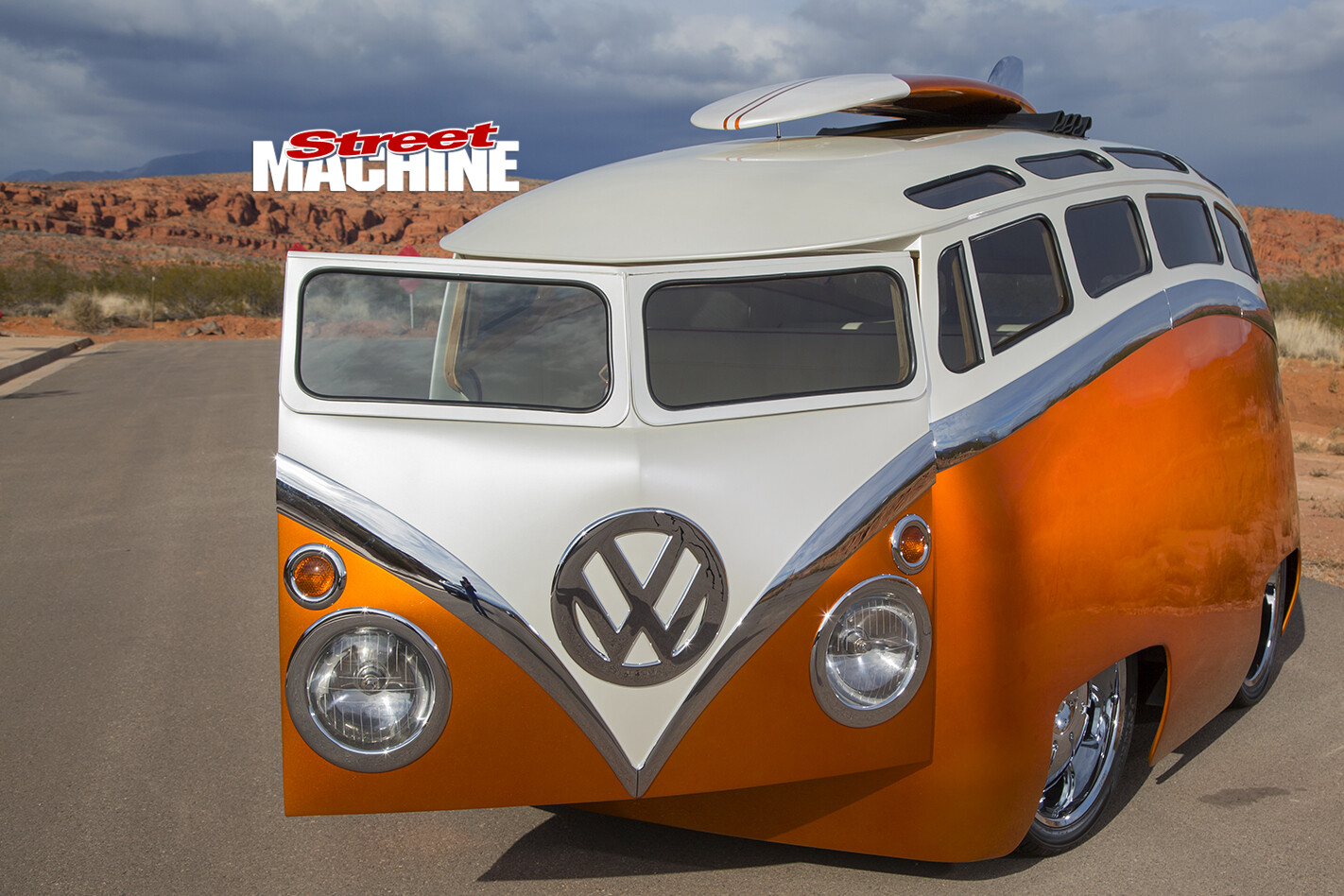 “It’s pretty much a retirement community where we are [in Utah], but it’s amazing how many Californians have moved to this area, and nine times out of 10 they’re a car enthusiast.”

The move away from the rat race has obviously worked wonders, with the VW being the second car Ron has built along these lines, the first being a ’39 Ford woody wagon. Another design, this time a Model A delivery truck, is well on the way to being finalised. 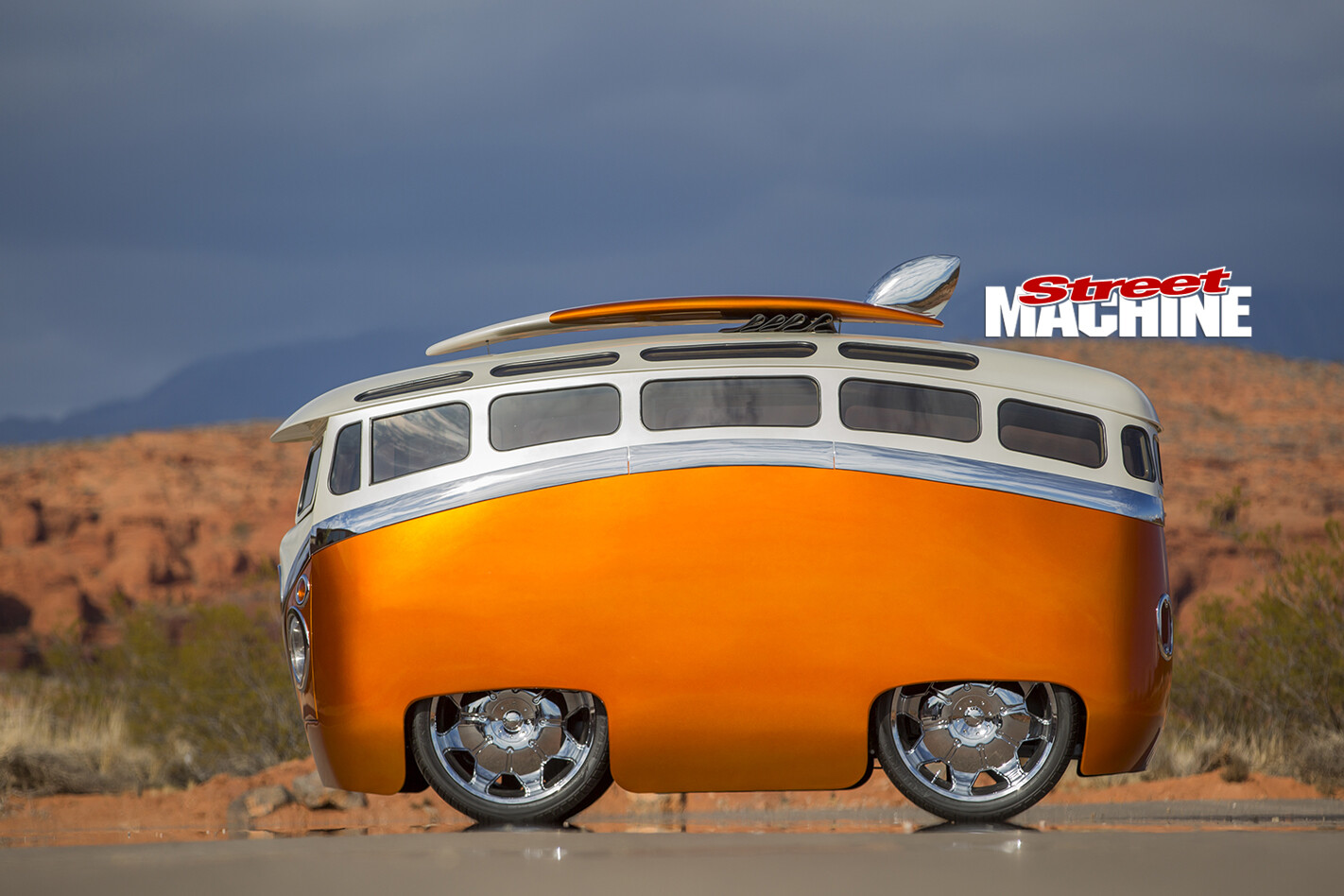 Somehow, Ron manages to completely change the design of the original vehicle, but keep the look and feel so that they are instantly recognisable. It’s as much a science as it is an art. “I just put my twist on it as far as the details go; it’s completely artwork, there’s no other way to explain it,” he says. “I like to emphasise the features on the car that people recognise. A lot of people don’t realise what they recognise, they just know what they see. They don’t realise that the drip rail is a big feature and the belt-line that comes down to a vee in the front – all those little things tell you it’s a Bus. I’ll emphasise those details and that is what animates it and puts a lot of style into it – and people really enjoy it.” 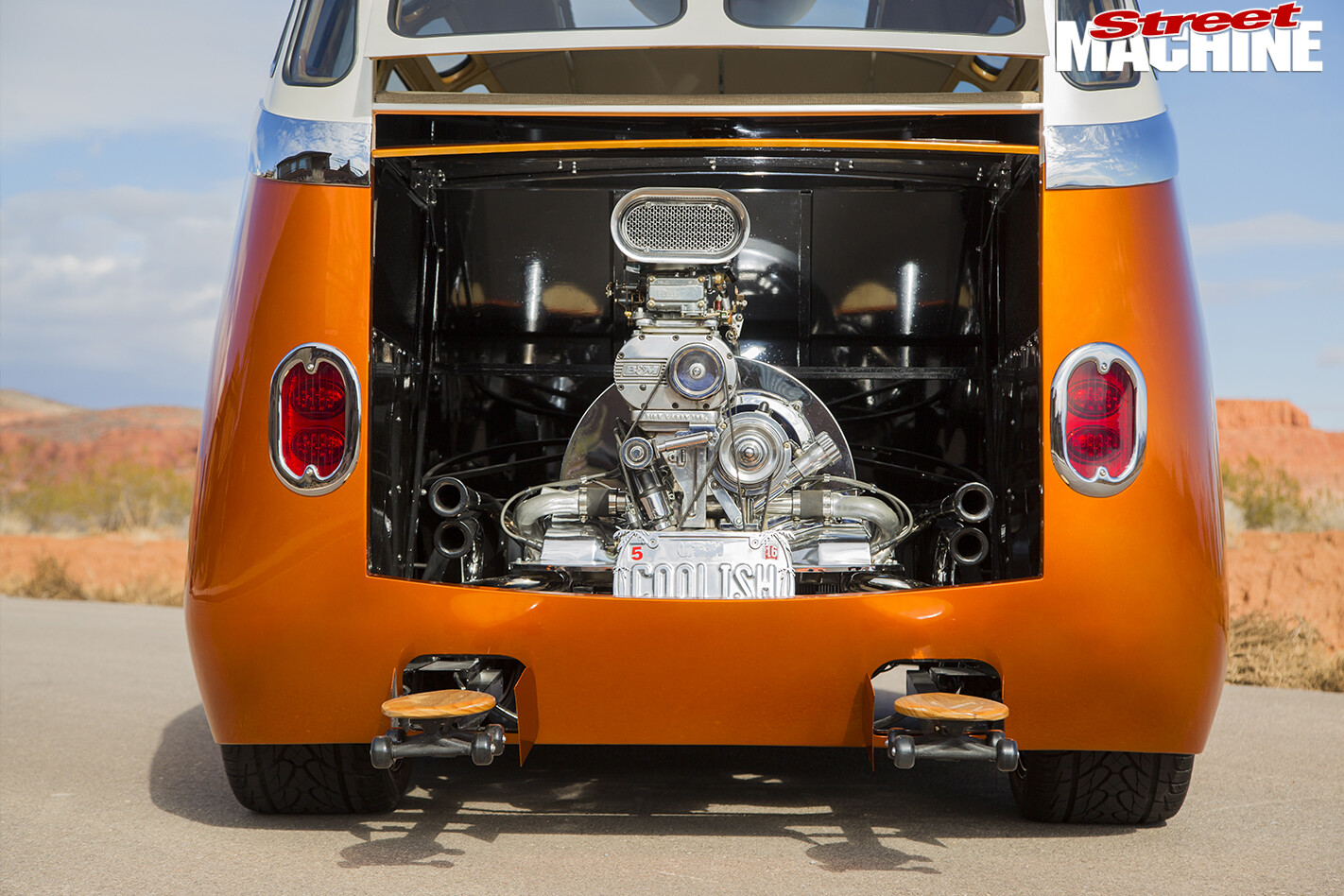 When it comes to building these one-off creations, getting the design right can take Ron longer than the actual build time. It’s hard to believe, but the Surf Seeker was completed in just 17 months, and that includes building the entire body and interior, not to mention the chassis modifications (more on that later). For Ron the design process is one of evolution, and we all know that takes time. “I’ll draw it first, just the concept, then I’ll hang it on the wall in the shop. Every time I walk by it I give it a look and make an adjustment,” he explains. “I’ll do that for a month, then when I finally get the concept, proportions, design and flow of it, I’ll redraw it in detail and scale it.” With the plan finalised, both on paper and in his head, Ron did what all good customisers do – he started cutting. “It was a ’65 – what you guys call a Kombi – and I removed the pan and replaced it with railing. I thought about building a whole new chassis, but it would have been too time-consuming. I wanted to keep the forward controls, so I’ve got everything that a Bus would have,” Ron says. 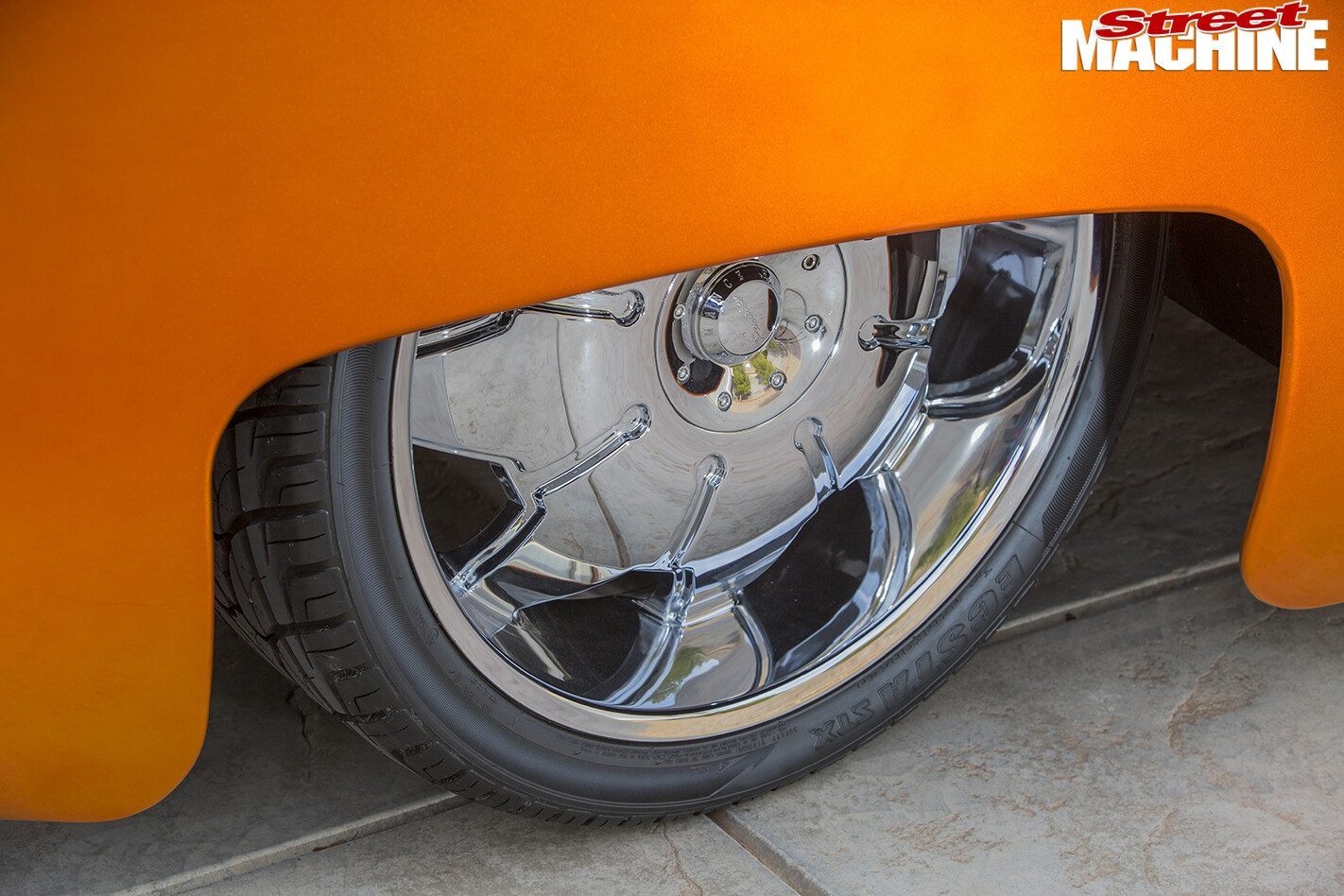 The front and rear suspension has been changed, and while it’s still torsion bar in the rear, the front has been converted to coil-over. “The front still has the torsion tubes but I modified disc brakes from a Camaro to fit on the VW spindles. I took the torsion bars out of the tubes and put a solid spring steel bar in so that it acts as a sway control, and I replaced the shocks with adjustable coil-overs. It worked really well,” Ron says. “Because of the height and weight of the Bus, I was concerned it was going to have terrible body roll going around a curve, but the changes to the suspension pretty much eliminated it.” 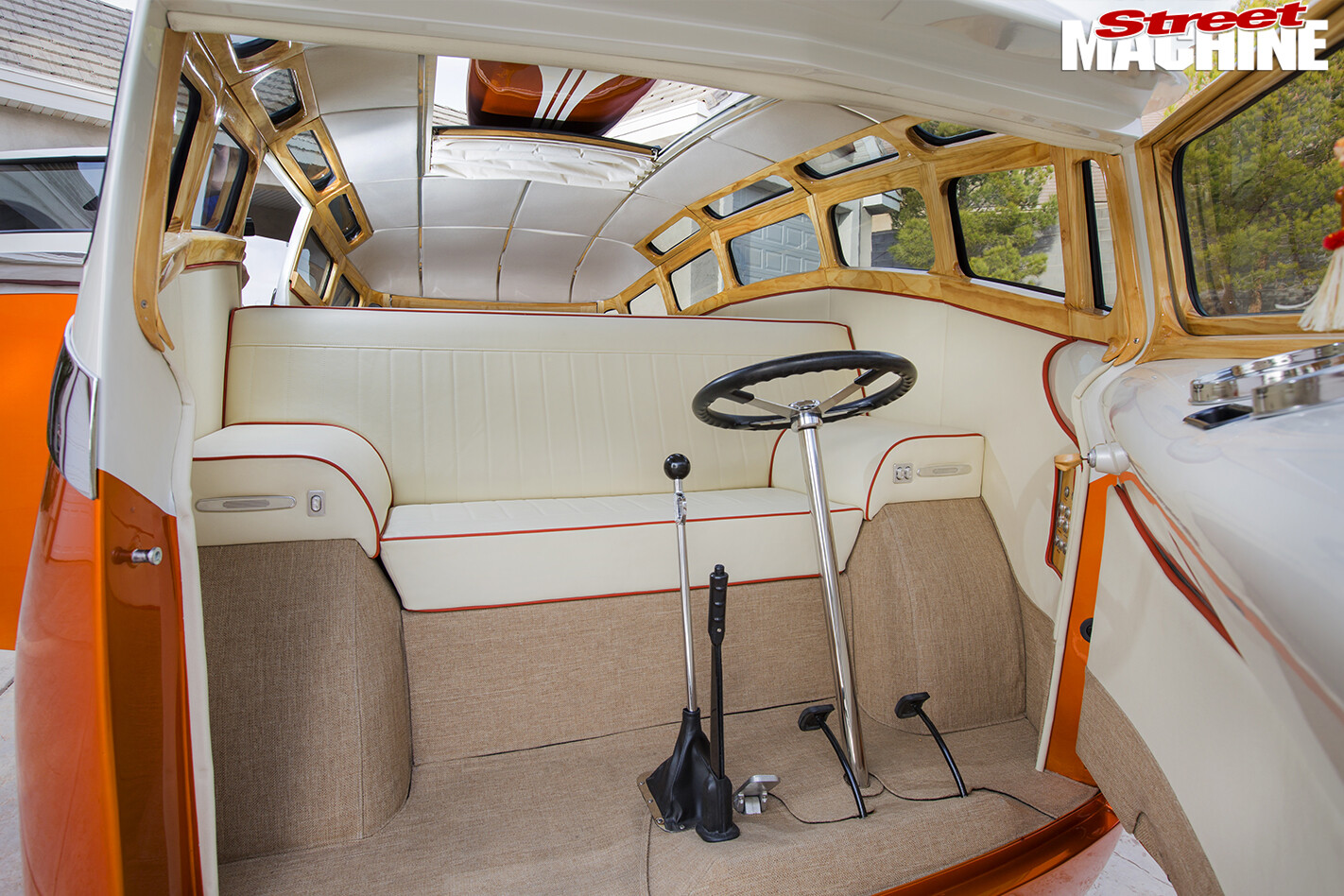 And that was the easy bit. Now all Ron had to do was make everything else – from scratch.

The framework of the body was first created using square tube, with all of the window openings laid out and the front and side doors hinged. The body was then fabricated using 1.2mm sheet metal, including the dashboard and inner structures. It was then finished off with a stunning a PPG Radiant Orange Glow and White Pearl paintjob by SKJ Customs. Ron also fabricated all of the interior panels and had the seats trimmed in a cream vinyl with orange piping.

Being a hot rodder at heart, Ron couldn’t just leave the asthmatic original engine in place; he needed something with a bit of giddy-up. He did entertain the idea of using a Subaru engine, and with that in mind had Strictly Foreign build one of its Super-Street Performance transmissions. You’ll all be happy to hear that in the end Ron decided to stick with a VW powerplant, but this time it would actually have some horsepower – 209 of them to be precise – and it’s a pretty special bit of gear. It’s the VW equivalent of a big-block, measuring in at 2275cc and built by Ron Jones, and sports Mofoco 050 heads, Wiseco pistons, Scat Pro crank and Pauter rods – all forged of course, because shit was about to get serious. Crowning this wild motor is a B&M blower with a 600 Holley that sits on a Dick Landy intake. Tell me how many other times you’ve seen one of them? Probably never, as Ron believes this is the only one ever made. The exhaust is a pair of beach buggy headers that Ron stuffed some baffles into, but they don’t really do a hell of a lot. 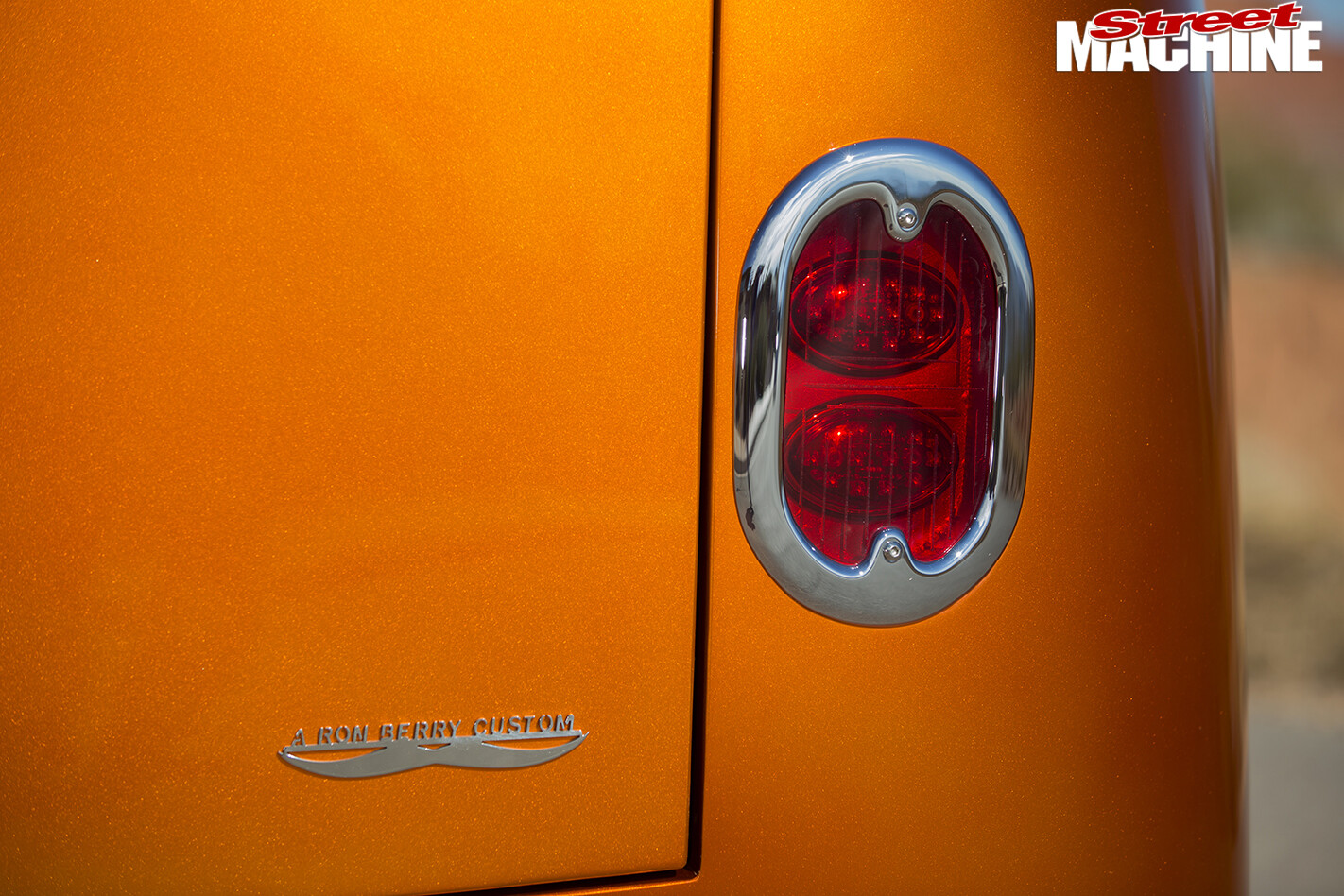 Though a lot of people say: “I built the whole car myself,” there’s not too many that go as far as Ron has, but as he admits, he doesn’t know any other way. “Back in the 60s I was really into drag racing and doing hot rods and we had to create all of our own stuff. You couldn’t buy it, you had to make it, so I learnt my craft through necessity. If you wanted a particular feature, you sat down and figured out how to make it. That’s still with me and I have a hard time using manufactured parts.” 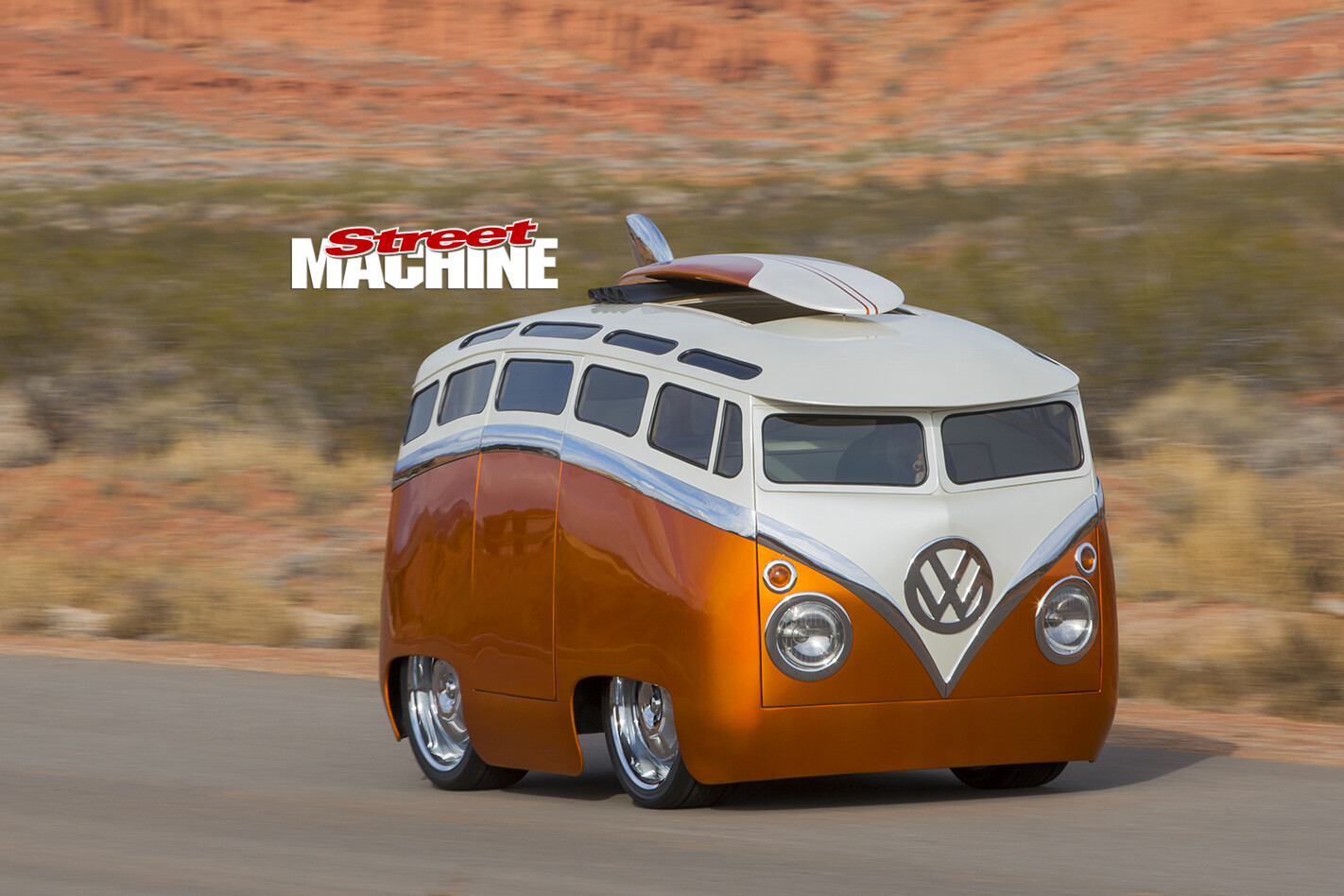 Just keep doing what you’re doing, Ron. We love it!