We chat to Benny Hewlett about the Running On Empty festival, set to rock Cobar, NSW this October!

CRACK out your rad 80s threads, tease your hair, hang a garter belt from your rearview and polish your tramp rods, because the NSW outback town of Cobar is set to host the Running On Empty Festival 2018 on 26-28 October, a weekend-long tribute to one of the most iconic Australian car movies ever. We had a chat with event co-organiser and car freak Ben Hewlett to learn more about the inspiration for the weekend and what they have in store.

Hewlett? What type of name’s that?

It’s a Polish name [laughs]. Oh man, it’s started already! It’s amazing how many one-liners from this film are just ingrained into Aussie car lovers’ vocabulary. Those that know just ‘know’, and you can guarantee it’ll start a back-and-forward banter with people, regardless of whether you know them or not.

I’m sorry Ben, I promise to behave myself. So how did this Running On Empty Festival come about?

Well, I’ve been coming to Cobar since I was a kid, and it was only in recent years that I learnt just how much of the film was actually shot here and in the surrounding areas. My mate and fundraising partner John De Bruin and I have been doing a heap of work for the local RSL and other charities, and I casually and selfishly suggested to him a few years ago that we should stage a Running On Empty movie festival. Twelve months later, John revived the idea, so we decided to give it a shot. I’m the president of the local RSL sub-branch and we’re trying to build a monument for the local Cobar diggers who lost their lives during World War I, and also assist building a miner’s memorial for the people of Cobar, so all monies raised are definitely going towards two worthy causes.

Wow! At 38 years old you must be one of the youngest-ever RSL branch presidents, wouldn’t you?

One of the youngest for sure, especially as I’ve been in the role now for a few years. But my background was in the army before we moved here six years ago, and I served overseas too, so I think I’m at a good age to segue both the younger and older generations of membership we support, while having a genuine understanding of what serving with the Defence Force entails.

You’re obviously a car nut; I know you were involved with the Australian Army’s Land Rover and LTD burnout cars, so this festival sounds like it’s in good hands.

I joined the Armygeddon Land Rover team and ran that for a couple of years before we tackled the chopped, green Project Digger LTD, which I built the engine for. My mate Brian handled the wheel work at Summernats and various burnout comps. They were great times – getting to live and breathe cars while getting paid to promote army trade apprenticeships was a great combo; it was job satisfaction plus! The LTD is still around the scene too, and came up so well. I’ll be happy not to deal with sorting custom glass for a roof chop again though [laughs]; it was a nightmare.

ROE Festival organiser Ben Hewlett pictured out the front of the ‘Welcome to Cobar’ sign with Kade Bishop’s HQ Monaro. Ben reckons there are a few toughies in town, but the joint will be overrun with them come October!

Will Sheryl be there getting her gear off?

I can’t guarantee that – but we have a great line-up of original actors keen to attend, all of whom are really excited by the event, which is great. Gerard Sont who played Victor just gave me the nod, and Kristoffer Greaves who was Starter with the leg irons is on board too. Jeff Rhoe – aka Rammer – will be there as well to shake some windows [laughs]. Aussie legend Max Cullen, who starred as Reb, is a definite, which will be a highlight. I was like a total fanboy calling him; as the phone was ringing I was saying over and over to myself: “Don’t sound like a dickhead, don’t sound like a dickhead,” but of course I did.

The original movie EK was smashed up badly in the film, but this top-notch replica built by Val Domotor will be in Cobar for the festival

Oh, that’s a classic! Max Cullen was such a huge part of our childhoods though on the big and small screen, so I totally get that. His career includes everything from Secret Valley to Midnite Spares and Wolverine, so he will no doubt be a huge drawcard.

Exactly; my grandad and I used to watch him in Sunday Too Far Away when I was a young tacker, so there’ll be all generations who are starstruck with Max. We’re building a façade of Reb’s Garage with stuff like a fuel bowser at the spot where the movie garage sat, which will be a fantastic photo opportunity for visitors with the star cars, or their own cars too. Max even signed off his confirmation email with ‘Reb’, and I just laughed; he is keen!

The real BLOWN-57 survives, but is currently undergoing restoration and won’t make it to this year’s festival. Nevertheless, there will be a few black ’57 Chevs in attendance, including Jenni Cleave’s stunning ’57 210 (SM, Apr ’17), which was directly inspired by the movie and packs a blown 454 rat motor! “I reckon every person I’ve ever met that has a black ’57 owns their car because of this movie,” Ben says

How about the all-important star cars? Have you had much luck there?

Definitely, yes; the FOX-1 Challenger is in pristine condition and coming all the way from Perth, which will be awesome, and we have a Gazzard Brothers EK and a number of red XY GTs lined up too. The original blown, black ’57 is mid-rebuild at the moment, but there’ll be at least three other blown, black ’57s attending for you to spotto, including a really amazing Rebel replica. The chopped Rammer Chev is also being rebuilt, but we have another early Chev coming that looks the part, which along with a swag of visitor cars will make for an awesome sight over the weekend. I hear the Carnage boys from Street Machine may have something in the works too?

One of the star attractions at the ROE Festival will be the original FOX-1, the film’s bad-arse 1970 Dodge 440-powered R/T Challenger. While it appeared that the car was destroyed at the end of the flick, it survived! We featured FOX-1 in SM, October 2001, then owned by Rodney Ogbourne. These days, the car lives in Western Australia, owned by Jason Turner and Dominic Dagostino (who had the car at Motorvation)

Yes, it’s in the planning stages, so fingers crossed! So what’s the festival itinerary? How can people get involved or find out extra info?

Friday will be a meet ’n’ greet at the local rugby ground and an informal night cruise, with the main action slated for Saturday. We’ll take a run out to Canbelego to the site of Rebel’s Garage before heading back to Cobar for a lunchtime show ’n’ shine and afternoon sightseeing tour. For Saturday night there’s a function at the Cobar Golf & Bowling Club, which will include a Q&A session with actors and mechanics from the film. We’re sharing the weekend with the Festival Of The Miners Ghost, which celebrates Cobar’s mining heritage, so there’ll be something for everyone. Plenty of the local shops will open especially for Sunday trading too, so people can stock up before heading home. More information is available at our website – runningonemptyfestival.com – or our Running On Empty Festival 2018 Facebook page.

So are you going to be cooking personally at the event?

No mate, definitely not, I’ll be too busy, but there will be plenty of food options available for attendees. Why do you ask?

No valid reason. I was just going to say: Don’t burn the snatch, Ben…

I walked straight into that one, didn’t I? 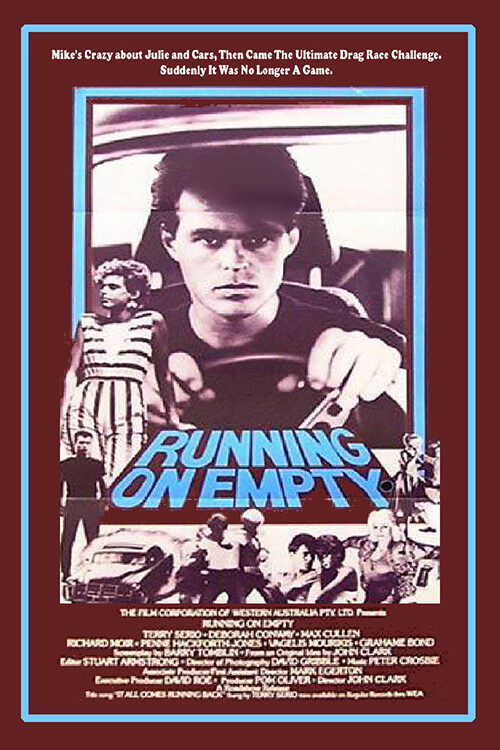 1. The surely V8-powered, yellow HG-grilled HT Monaro that races Fox at the start of the film gets replaced by a stunt-double HK for its fiery departure – a six-cylinder donk is also clearly visible when the bonnet rips open.

2. The chopped 1953 ‘Rammer’ Chev sedan began its movie career as a surfboard-clad, two-tone custom that featured in the 1977 Aussie flick Summer City featuring Mel Gibson, Steve Bisley, Phillip Avalon and John Jarratt. The flat-finish paint and bullbar were added for Running On Empty.

3. Kevin Monk’s legendary orange 1969 Dodge Daytona (SM, Jun ’86) can be spotted in the film, and now resides back in the US restored to its factory-correct blue hue – but sadly missing its huge rake, monstrous rear slot mags and flex-flares. However, it is still in RHD configuration.

4. Rebel’s blown, black ’57 Chev used in the film started life as a four-door and has been in the hands of its current owner for 30 years. Rebuilt for the movie by mechanics Steve Courtney and Mal Ward, it was driven by Steve in the film – he performed the famous doughnut scene at the last race.

5. Victor does get his blue XB panel van “hopping”, and it returns with a silver makeover and sporting a bodykit made famous by the Arcadipane-designed ‘Concorde’ Ford show van that debuted at the 1977 Melbourne Motor Show. It is the same front used on Mad Max’s black Interceptor hardtop.

6. The Fox Challenger was of course never destroyed at the end of the film; it was a sacrificial VH Valiant four-door sedan with the upper B-pillars cut out, painted to resemble the proper star car.

7. Actor Richard Carter, who played one of the Gazzard crew and spoke the famous line: “Don’t burn the snatch, Kev”, is responsible for the voiceover work on many of the Victoria Bitter beer commercials since the passing of Aussie acting legend John Meillon in 1989.

8. Keli Roberts, who played the infamous Sheryl, followed her passion for fitness to become a world-renowned fitness educator and instructor, and an LA-based personal trainer to many Hollywood stars.

9. Mike’s best mate and mechanic, Tony, was played by Vangelis Mourikis, who returned to Greece to pursue his acting work and has forged a multi-award-winning career as an actor, writer and producer.

10. Running On Empty was the first production for the Film Corporation of Western Australia, yet ironically was filmed in New South Wales.