WHEN a young George Anthony spent his late teens and early 20s building up a once-beige XB Fairmont sedan into a lemon-yellow showstopper, little did he know the legacy he would create and how much of an impact this build would have on more than three decades of hot-car fans.

Its look was unmistakable – the Paul Bennett-applied bright yellow paint and graphics were highlighted by eight chrome injection stacks slicing through the bonnet and 14-inch-wide Center Lines stuffed under the McDonald Brothers tubbed and clipped rear. We featured the XB as Hot Property back in SM, June ’88, but within a few years it was sold and heading north to Queensland under the stewardship of local gearhead Mark Crane.

Mark bought the car as a roller, building a fresh Cleveland – albeit with the original Algon injection – before refining and detailing the rest of the car to the nth degree. Craney used the Fairmont as a rolling advertisement for his Clontarf-based mechanical workshop, polishing the Center Lines and adding magenta-coloured highlights to balance the yellow paint and bring the build firmly into the 1990s.

The XB eventually returned south to new owners, losing the graphics for a solid yellow hue and living life at the drag strip where the tubs and ladder bars were put to best use. Sparse race concessions aren’t always the best outcome for a street/show car, and much of the glory box interior had been either removed for good or replaced with aluminium, including the seats and complete dash.

Fast-forward to 2016, and Victorian street machiner Sam Gauci was keen for a new Blue Oval-based project, the only prerequisites being that it be tubbed and able to be engineered for street use. 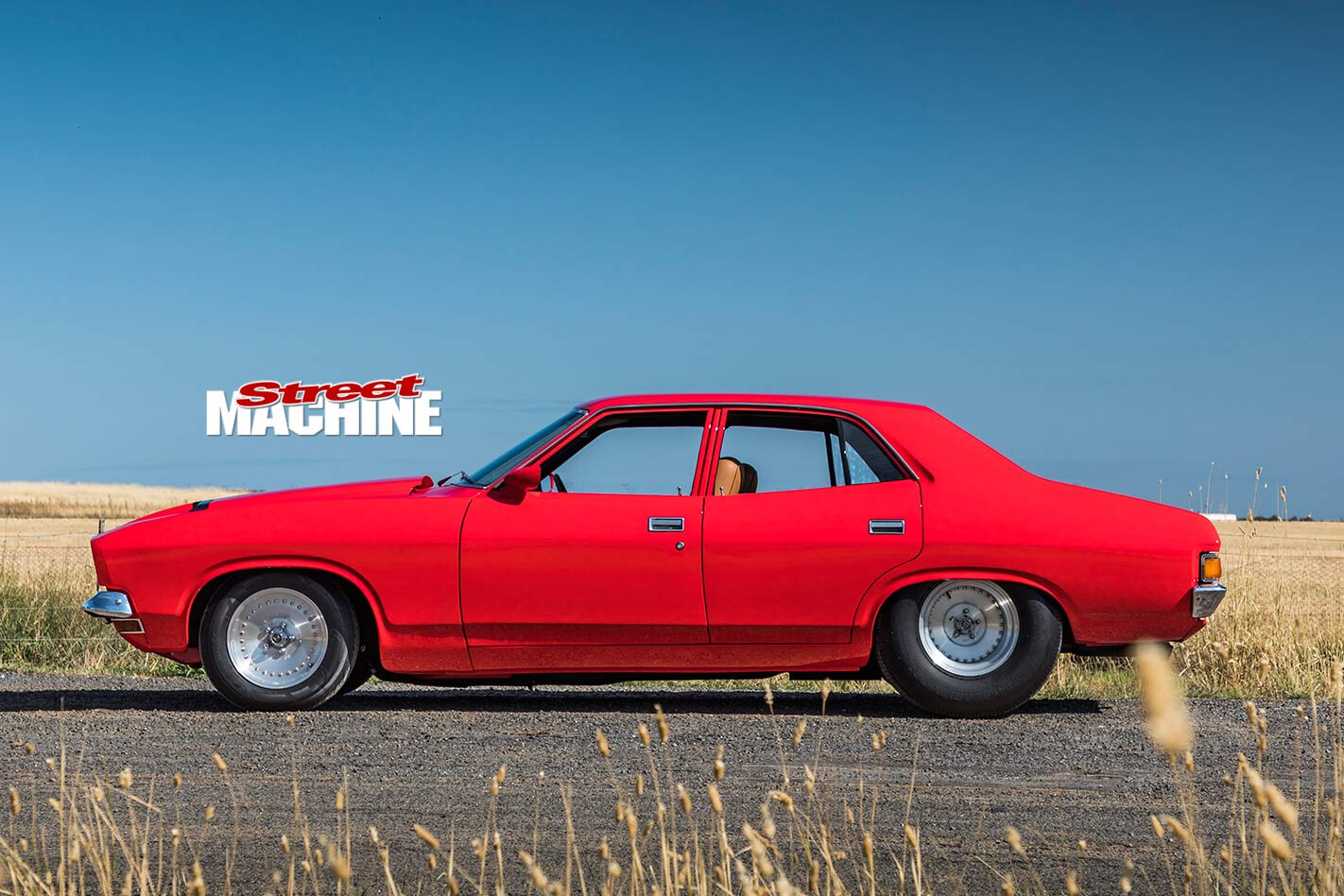 The XB cuts a wicked profile thanks to the perfect ride height, timeless wheel and tyre combo and striking colour choice, mixed with the inherent factory toughness that only a driving-light grille and nostril bonnet can offer. The latter was pumped for added air cleaner room, which not only looks cool but retains the original lines

Now, Sam has priors for tough ’n’ tubbed Fords – his silver Falcon ute dubbed ‘Top XY’ ran a Predator-equipped 429ci big-block and meaty Weld Superlites when it graced the pages of SM back in our April/May 1992 issue. Sam sold the XY a number of years ago and was keen to try his hand at a fresh build.

“A friend told me about a yellow, tubbed XB in Melbourne that was an ex-Summernats car,” Sam says. “I just had to go for a look and as soon as I saw it, I recognised it as George Anthony’s old build. Its life as a drag car had taken a toll, but it was still a good basis for a new build, so I brought it home.”

Sam nestled the XB into the back of his shed and started mapping out the project and buying parts. He already had many of the engine goodies in stock, so began by focusing on a fresh Clevo build. Although a chippy by trade, metal doesn’t scare Sam in the slightest, and he is more than handy when it comes to all aspects of a car build. He undertook the Cleveland engine assembly in-house and began by stretching a factory cast-iron block to 408 cubes using a Scat stroker crank and conrod combination.

The short assembly was rounded out with a Howards Cams camshaft and Comp lifters before being topped with 225cc CHI 3V heads and a matching CHI high-rise intake. An 850 Holley carb and MSD ignition morph to light the fire, while waste gases are spent via Pacemaker headers and a twin three-inch system.

A C10 automatic transmission was another piece of shelf stock that Sam had rebuilt with a full-manual valvebody and transbrake, while a 5000rpm stall converter provides a vital drivetrain link. A full-floating, 4.11-geared nine-inch features a Truetrac centre and 31-spline axles, with Wilwood disc-brake assemblies sorting the stopping duties front and rear.

Satin-finish Center Line Auto Drags in five- and 12-inch widths hark back to the XB’s 80s youth, and are clad in Nankang 175/70 and whopping 31x18 Mickey Thompson rubber respectively. The tubbed rear end and Center Line Auto Drags hark back to the XB’s 1980s build, but this time ’round regular street use was a must. “The engineer needed the rear end revised, so we strengthened the chassis and fitted both a new four-link assembly and full-floater diff set-up,” Sam explains. The tailpipes were a tight fit but a necessary inclusion to improve the Falcon’s street manners

The front suspension remains as per the original Ford design, with Pedders springs and a full overhaul deemed satisfactory. However, the four-link rear from its Summernats days and drag career required some attention.

“Engineering the Falcon for legal registration was paramount, so with help from James at Lara Panels we established what it needed before strengthening the chassis and setting the rear up with a new four-link assembly and new nine-inch housing,” Sam says. 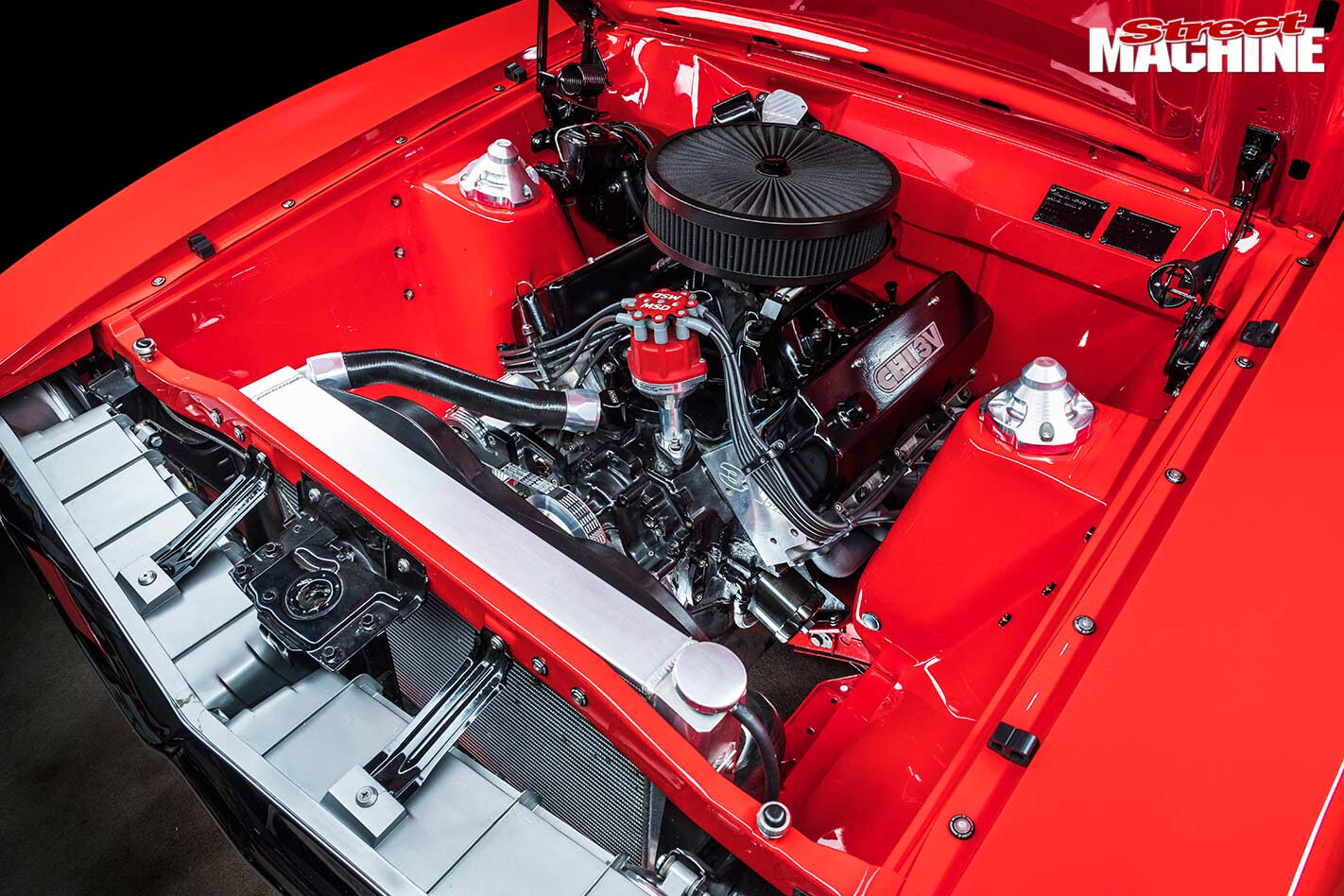 The 80s mechanical injection is long gone, but the modern Cleveland build packs a heavier punch, with 408 cubes and a brace of CHI aluminium top-end components. Sam handled all of the engine assembly before backing the Clevo with a C10 trans that features a full-manual valvebody and transbrake and is fronted with a 5000rpm stall converter. The engine bay detailing is understated perfection, and that luscious PPG Bright Red hue extends to the smoothed undercarriage

With the driveline sorted and the XB’s underpinnings sporting an initial tick of approval by the engineer, attentions were turned to the body and paint as the deadline for Summernats 33 loomed.

“It was just going to be a quick respray in the same yellow before reassembly, but blisters under the existing paint and some sections of filler meant it was bare-metal time,” Sam says. “Starting fresh at least meant we could properly repair a few rust spots, fill any superfluous engine bay holes and bathe the lot for a clean finish inside and out. And hey, if the XB had to be completely bare-metalled, it was the perfect time to paint it a colour I truly wanted.”

Sam and James sorted the subtle yet very cool Mr Damage-style pumping of the bonnet in steel to form a carb-clearing scoop, before James poured his heart and soul into the paint and panel of the Falcon. Ten months’ worth of very late nights saw the XB emerge looking pristine in that glorious PPG Bright Red.

Back at Sam’s, reassembly was quickly underway, with the driveline being slotted home in unison with the car’s rewire. With Summernats only days away, the XB’s interior makeover in cinnamon leather was finalised by Adrian Morgan at Kooltrim. The alloy parts and 10-point rollcage of its race days are long gone, with Sam refitting an original steel dash frame, GT gauges and factory bucket seats to meet his vision. 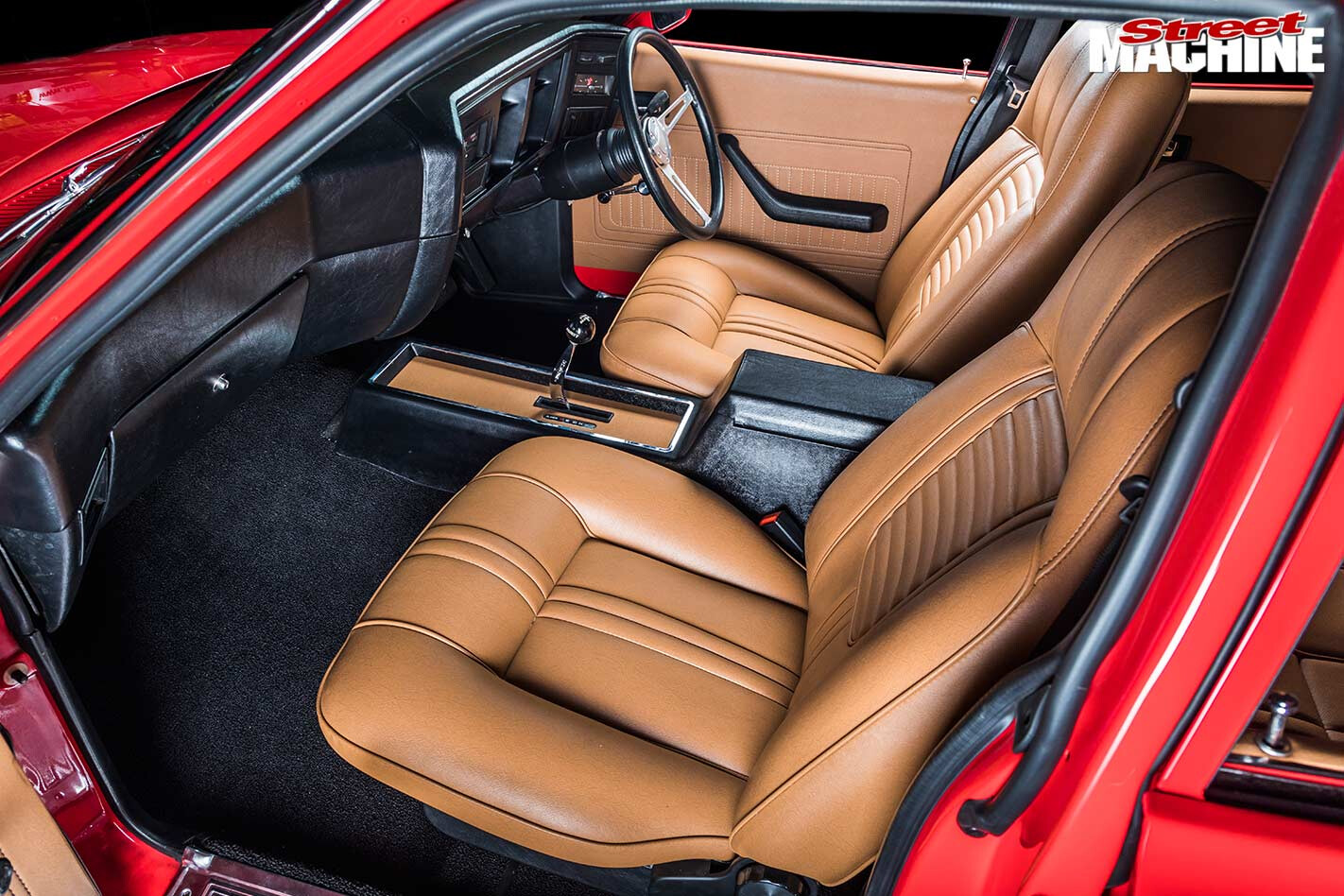 Adrian at Kooltrim refined the factory layout with cinnamon leather trim balanced with fresh black carpet and black highlights. The original dash had been cut away during the XB’s drag racing heyday, so Sam refitted any missing bracketry and sourced a replacement steel frame. A GT-style tacho dash is period perfect, while the Hurst shifter is housed in an original-style console

“It had a final cut and polish and then it was off to rego with only two days left until the ’Nats – things really got tight,” Sam laughs. “We loaded it on the trailer and hit the road for Canberra. It was such a relief to make that deadline.”

The XB received a very positive response, both in the flesh at Summernats and via social media, with a number of eagle-eyed aficionados recognising it as the car George Anthony built all those years ago. No matter your style-poison, it’s fantastic that an icon of our scene has not only survived but can still cut it so many years later, its modern-day refinements balanced with a number of old-school styling cues that pay homage to its lineage.

GEORGE Anthony’s tubbed ’n’ trumpeted XB made a huge splash when it debuted at the first ever Summernats, held over the New Year’s period bridging 1987 and 1988.

Although he arrived too late for official ’Nats judging, George and the XB made an impression on the Street Machine team; we named it as one of our Top 10 Summernats picks as featured in SM, March ’88. George shared this mantle with the likes of Rex Webster’s FJ, the Calais’ of Rob Beauchamp and Greg Carlson, and Owen Webb and his ‘Wild Thing’ XY sedan. We soon made George’s knockout XB our primary feature car for the June ’88 issue.

There were no surprises really as to the impact and quality of this build; the Cooma, NSW-based George was one of the young Anthony siblings leaving an indelible mark on the street machine scene at the time – we featured brother Tony’s tunnel-rammed and flared red XY on the cover of our Feb/Mar ’85 issue.

THANKS
My wife Cindy; James and Christine from Lara Panels; Adrian at Kooltrim