These days, Stuart Henry digs on nitrous big block grunt, but a few years ago he was carving up the Modified Street Blown list in with turbo small block Ford power

These days, Stuart Henry digs on nitrous big block grunt, but  a few years ago he was carving up the Modified Street Blown list in with turbo small block Ford power

CAST your mind back 20 years or so, and remember what the quickest street cars were running back then. A genuine 10-second streeter meant you were king. Nine-second cars were like unicorns — a beautiful idea but rather rare in the real world. 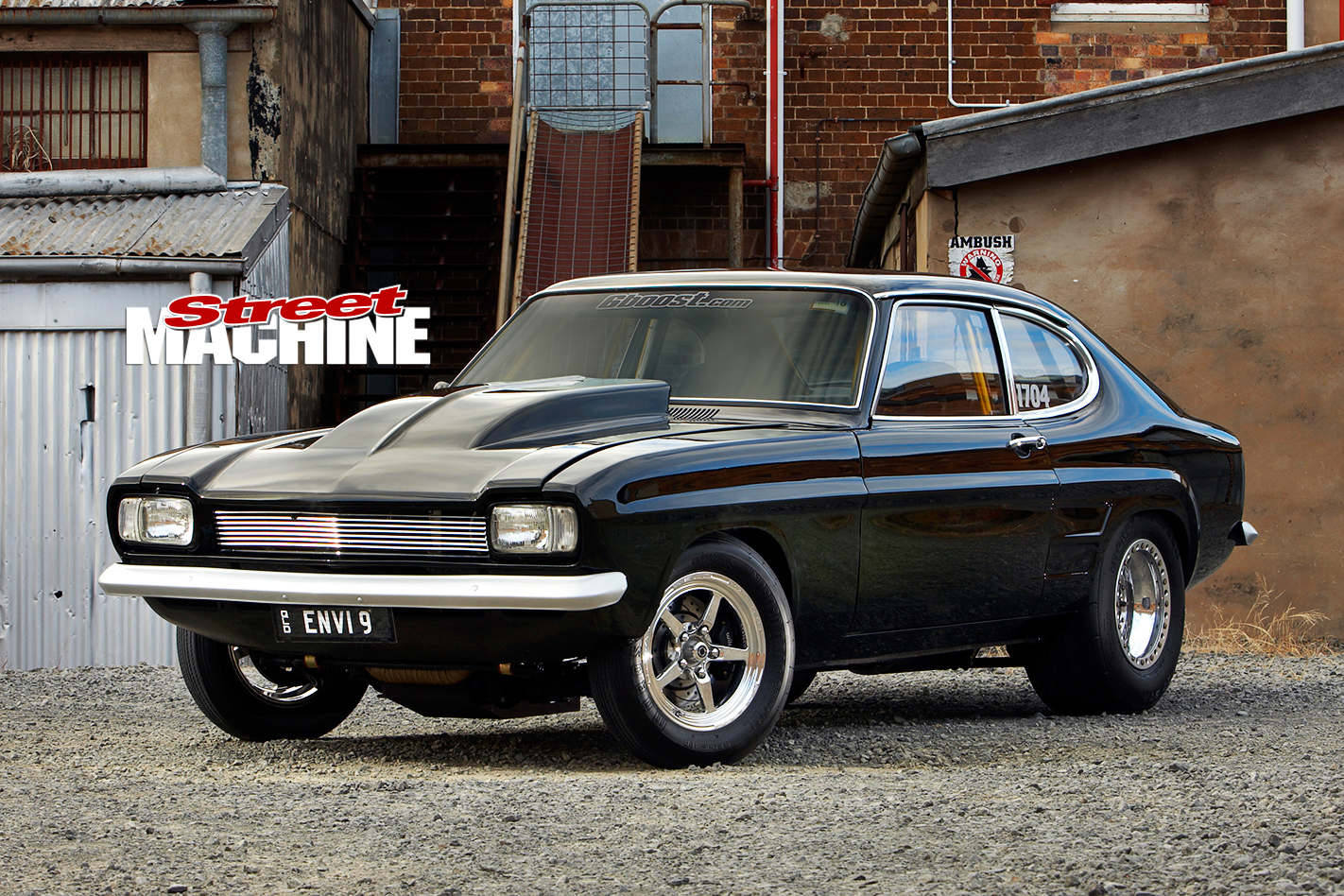 Now feast your eyes on Stuart Henry’s small block-powered Ford Capri. With its cowl induction scoop and chunky street radials, the svelte black beauty certainly looks the goods but nothing can quite prepare you for its elapsed time. Stuart’s Capri runs sevens over the quarter-mile while running pump fuel. And it still has leaf springs up the back!

No blue bottles or chemical cocktails (although he does admit to mixing in some Toluene at the track), no 15in-wide slicks or four-link rear end, and no polished metal mountain pushing north of the roofline. Not that we dislike that stuff, but there’s something especially cool about a car that can idle down the local high street without giving old ladies a heart attack, and still rip off a few seven-second timeslips without needing fresh nitrous bottles every pass. But Stuart has a surprising admission. 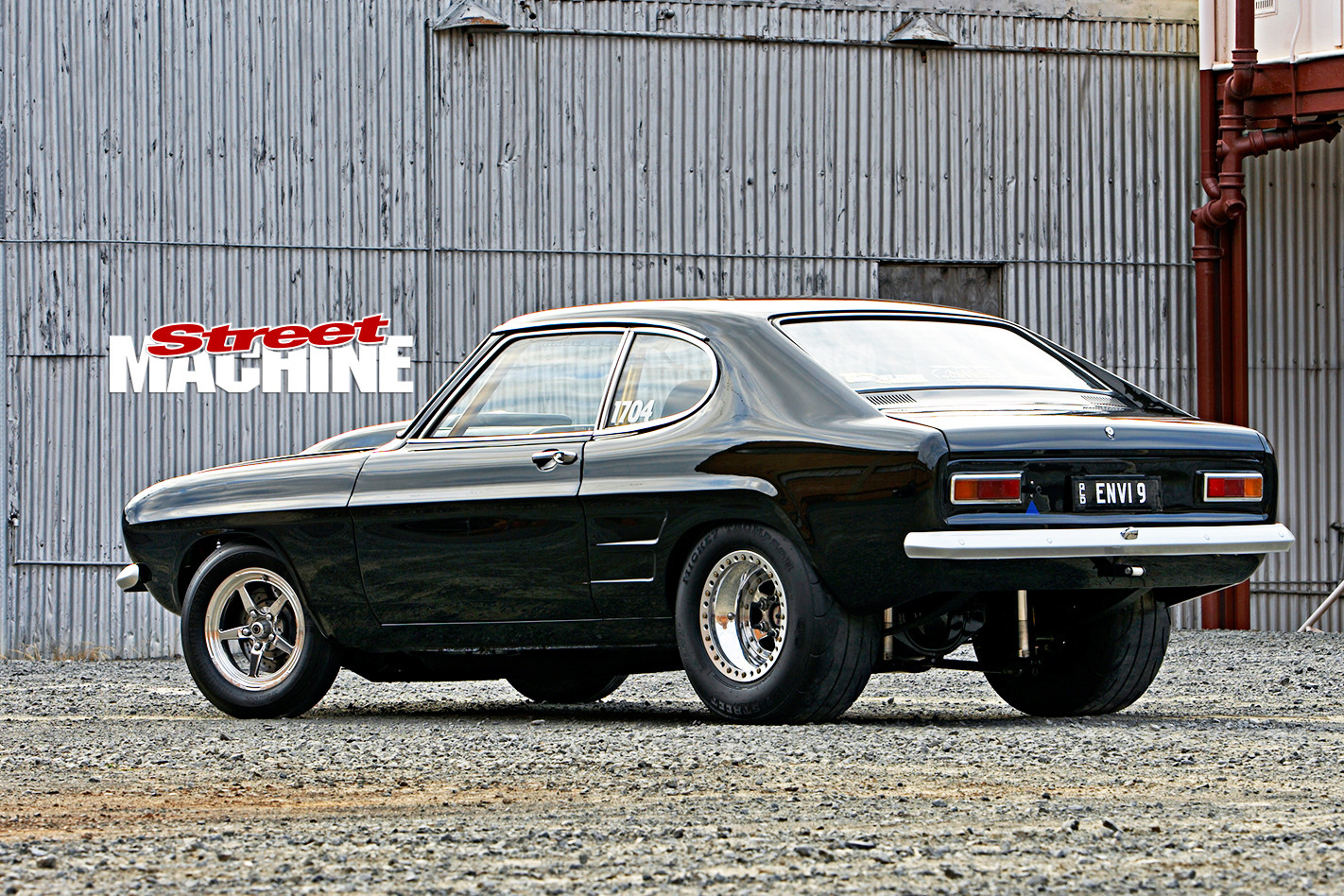 “I’ll be totally honest, the car was never supposed to get this fast,” he says, as if it was all an accident. “All I wanted the car to do was run high eights, like 8.80s, and do it easily. Then everything just got carried away. I never thought it would ever go as far as it has.”

In fact, this Capri wasn’t meant to be here at all. You see, Stu was building another Capri and bought this one for parts.

“I bought it just to get the interior,” he says. “It had a nice brown factory basket-weave interior in it. I got it home and decided it was too good to use for that, so I put it together as a street car with a 393 Clevo, C4 and nine-inch diff. Just a basic little street combo. And that’s how it stayed for a while.” 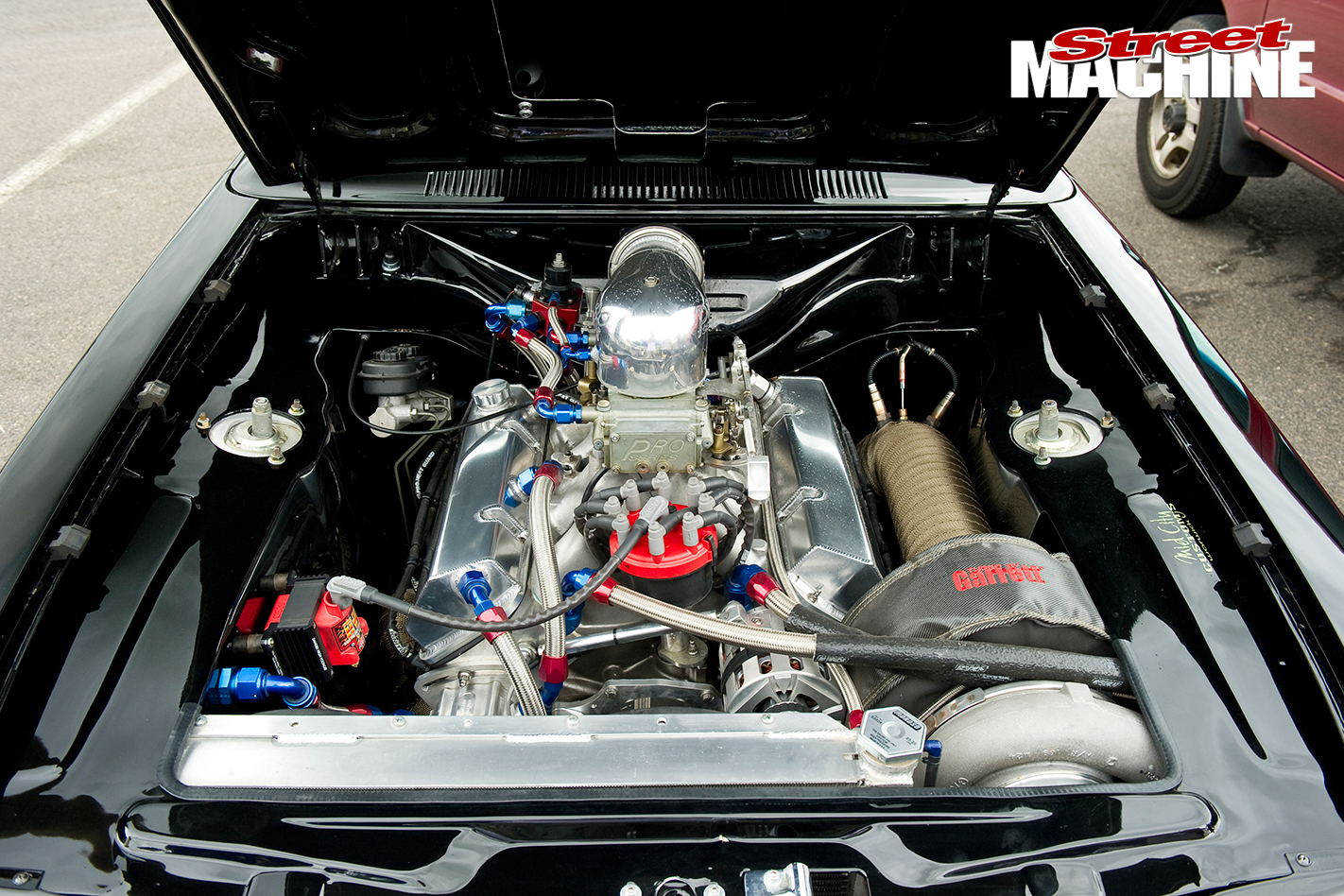 Then the other car was sold off and Stuart started racing the Capri, first with the naturally aspirated 393 Clevo and later with a healthy dose of giggle gas. At the start it was pulling 10.50s, totally natural. A set of CHI heads helped it progress to high nines, and then low nines arrived thanks to the chemical assistance.

At the same time it went from ratty factory gold to mid-green thanks to the guys at Mid-City Customs in Warwick, Qld. The only real body mods were the mini-tubs Stu had added back at the start, when he also relocated the leaf springs inboard for tyre clearance.

Then one day he decided to go through the whole thing again and do it properly. 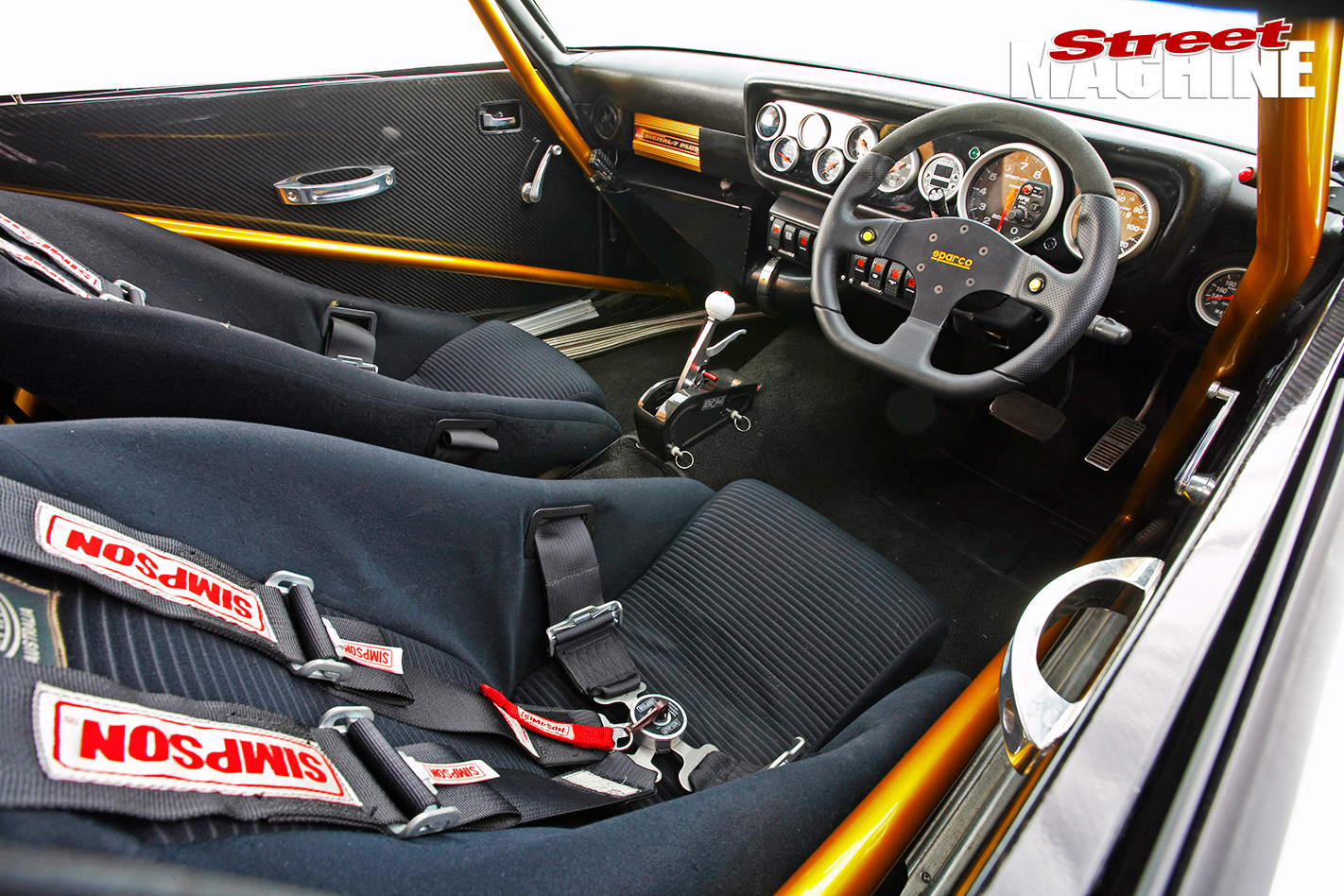 “I took the car off the road and stripped everything out of it,” Stuart says. “Sold everything — engine, gearbox, diff — took the ’cage and interior out of it and sent the car back to Jamie at Mid-City. He stretched the rear quarters, retubbed it and then painted it. We redid everything. There’s not one thing in the car that’s the same.”

Kyle from 6boost.com welded the new ’cage in the car but that’s not all. He was also instrumental in putting together the new turbo package that pushes the car down the quarter so rapidly. “It all came down to Kyle,” Stuart says. “I was two days away from ordering a killer naturally aspirated top end — I was just going to build a tough tunnel-rammed eight-second car — and he said he’d help me do anything I needed. He supplied all the pipe-work, the 88mm Garrett turbo, wastegate, blow-off valve, and that was his deal. He said: ‘Mate if you’re prepared to go turbo, I’ll help you put it all together.’”

Being the owner of Arrow Automotive in Toowoomba, Qld, Stuart was capable of putting together a killer bottom end. He started with a Dart block, Scat crank and Eagle H-beam rods, adding a set of CP pistons for good measure. The heads are CHI 3V with a four-barrel intake to match, and a CSU-prepped blow-through carb from the US tops it all off. 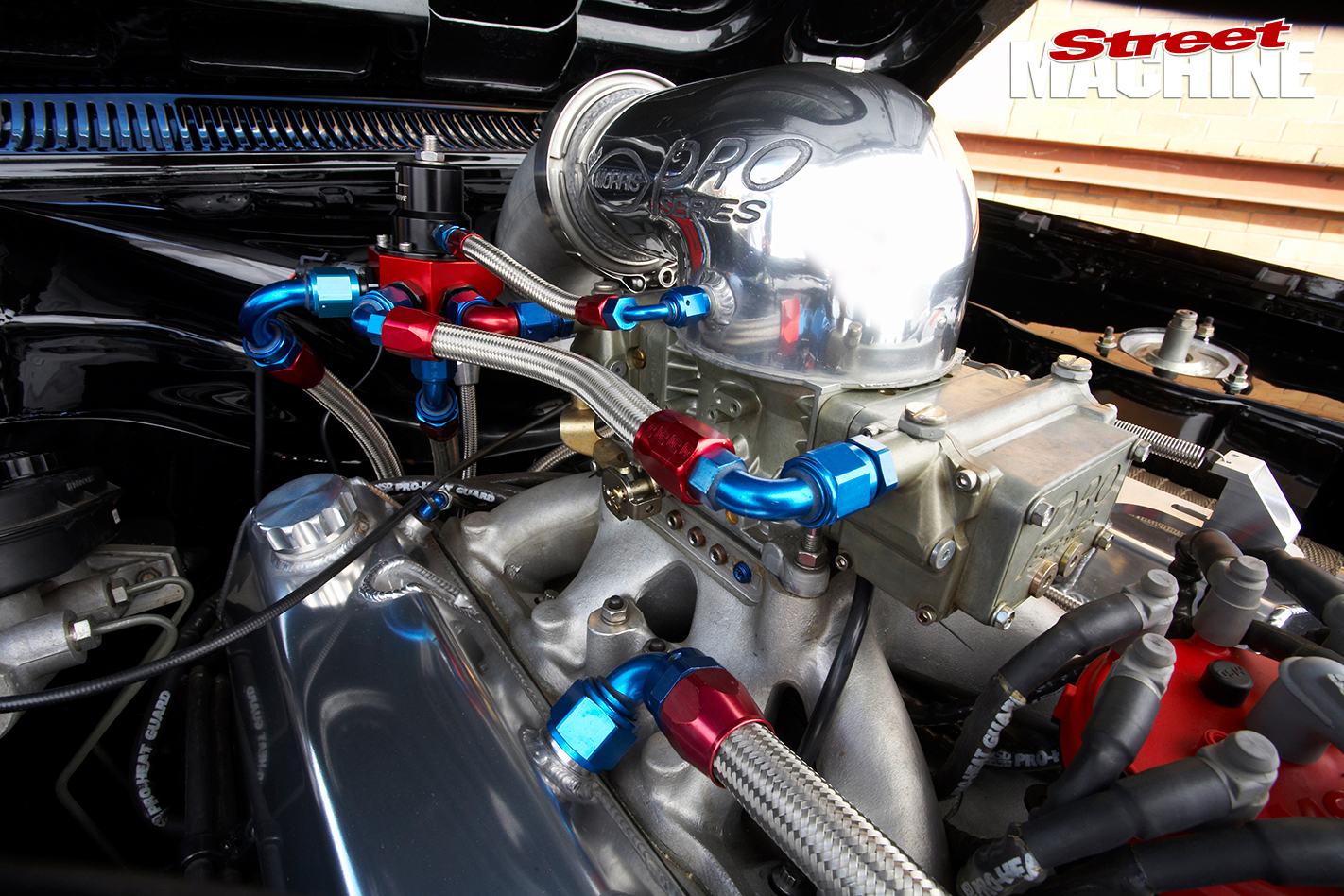 All up, he’s got 420 cubes to play with so the turbo was never going to be small but look at the size of this whopper — we’ve seen smaller hairdryers on semi-trailers!

You may also have noticed that it takes up a fair amount of engine bay real estate. So much, in fact, that Stuart moved the engine over slightly to give the dump pipe more clearance. There’s also a water-to-air intercooler, with an ARE core, mounted in the passenger-side footwell to keep intake temperatures to a manageable level.

“Yeah, it works well. It sounds easy but a lot of effort went into it, a lot of research, because not many people have done it here. I had plenty of guys tell me it would never work.” 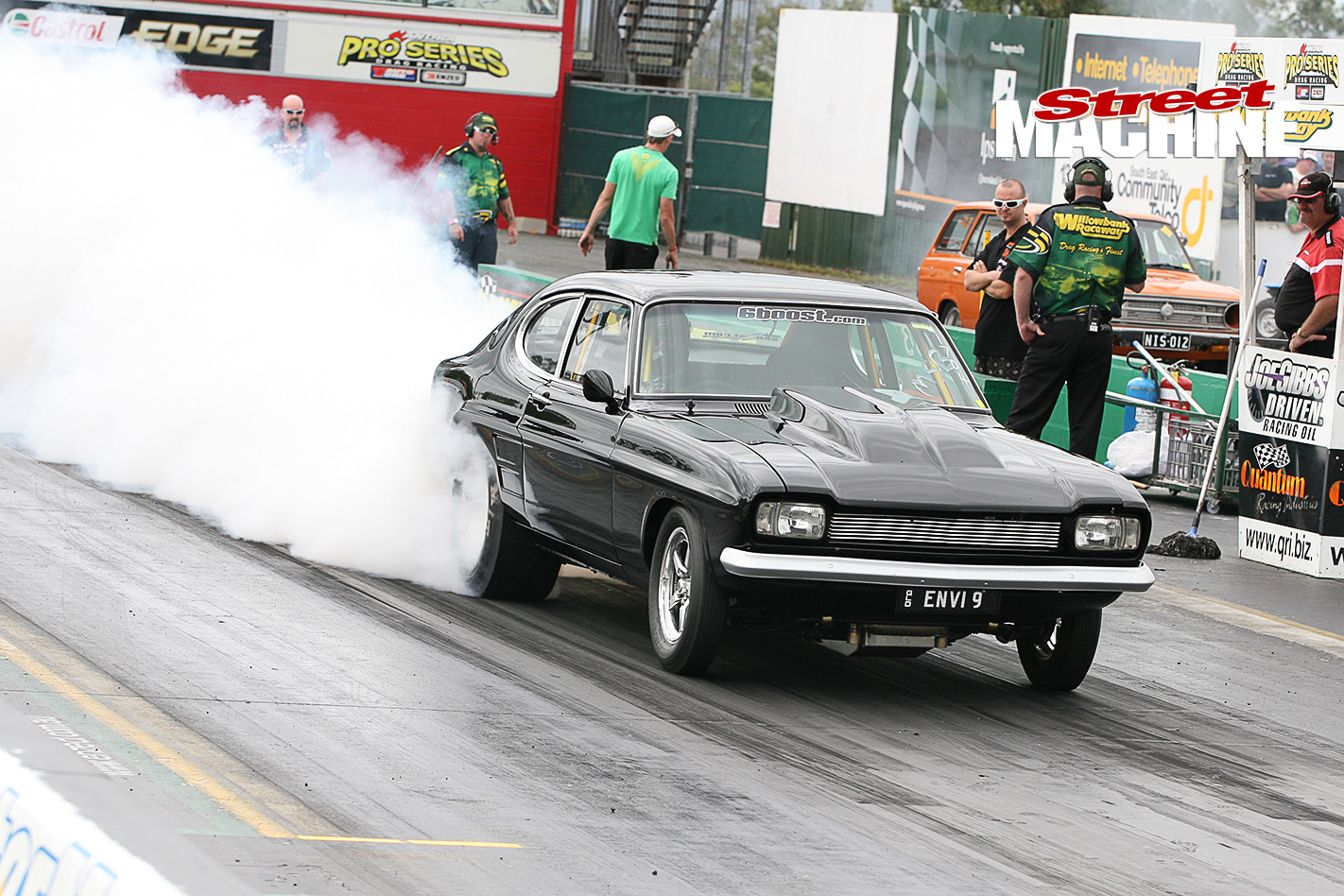 That’s a very large order of humble pie then, because the fastest time to date has been a blistering 7.85 seconds at an insane 180.6mph. Which takes some doing.

Now, with around 25psi being forced into the small-block, it’s anyone’s guess how much the engine is making. And they are guessing. “Johnny Wilson reckons it’s making 1450hp but I think it’s closer to 1400hp,” Stuart says. “I don’t want to put any more power in the car — the motor is probably going to be due for a new crankshaft and rods if we put too much more power into it. I think we’re on the limit — I really don’t want to push the friendship.” 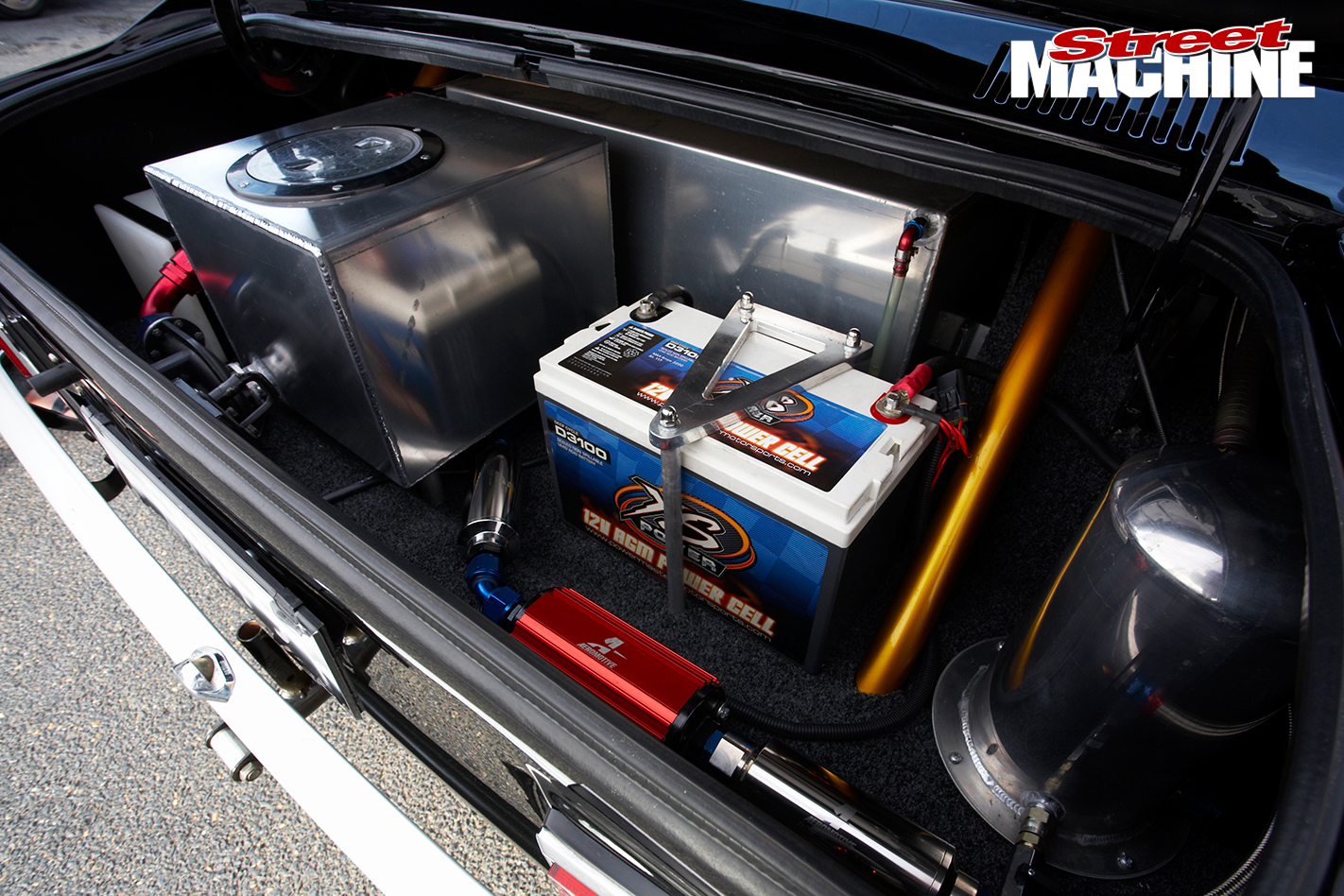 If you think running 180mph on leaf springs sounds a little insane, we’re with you, although there is some method in Stuart’s madness. He’s running a Calvert monoleaf system under the Capri’s rear and in the US there are cars running low sevens with the same suspension.

“They made me a custom set of leaf springs. They call it a split-mono because it’s two pieces. They overlap in the middle, with clamps either side. The front part of the spring acts like a bar in a four-link, so it’s the stiff part, and from the diff to the rear that’s your spring rate, depending on the thickness of your rear section.”

There’s a set of Caltracs too but Stuart admits that the system isn’t perfect yet. 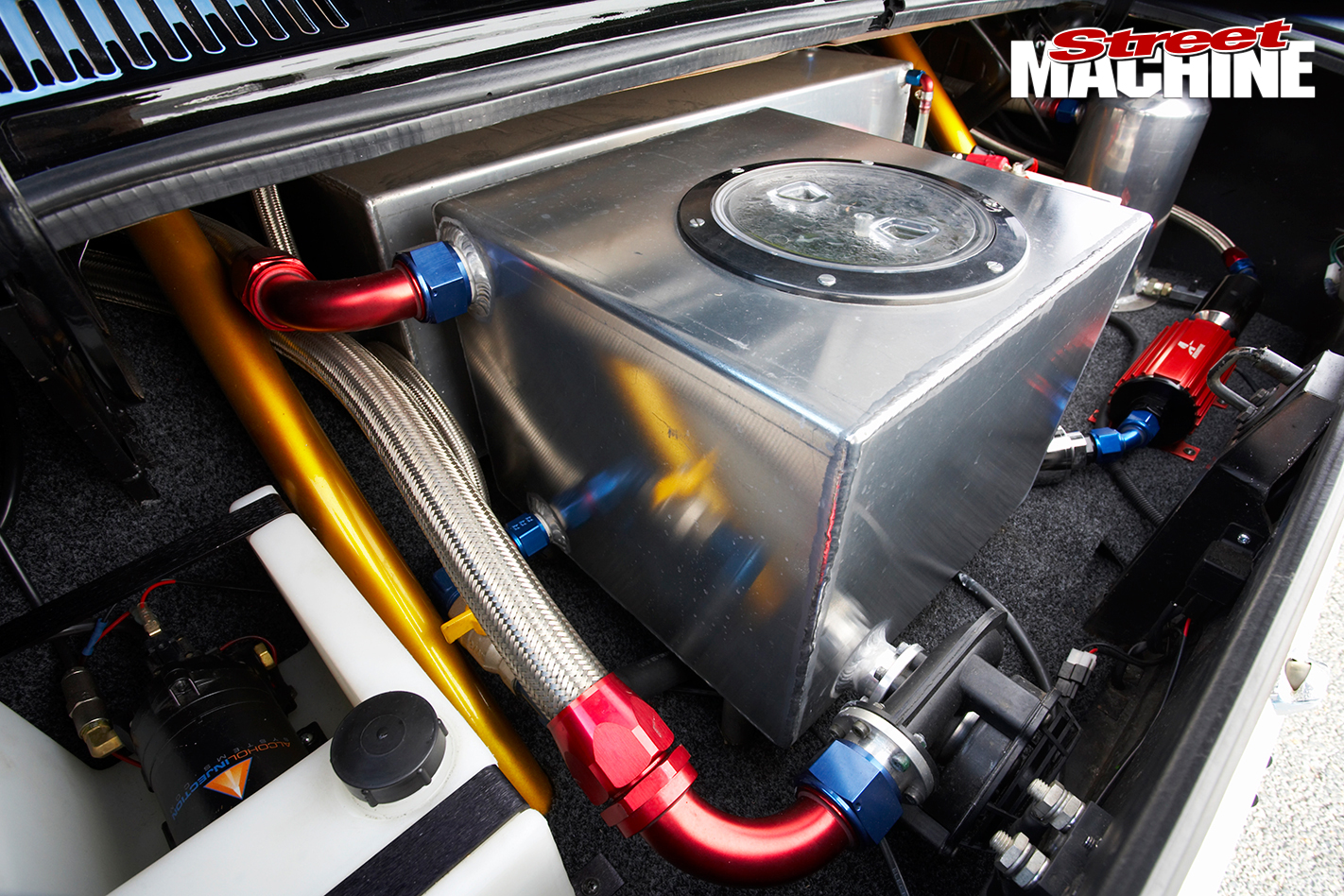 “I’ve been having trouble getting it dialled in; I’ve just gone to an expensive set of shocks for it.” Expensive? He’s sprung (ha ha) for a set of Santhuff’s shocks. “All the Pro Mod and Doorslammer guys run them — they’re pretty much the best you can get. I never imagined that the shocks would be such an important part of the car. I knew they had some impact but I didn’t know it’d be so big.

“When it’s going good, you can sit with one hand on the wheel. It’s like a Sunday drive and feels like you’re only going 140mph. But when it’s playing up, it’s not fun; it’s horrible.” 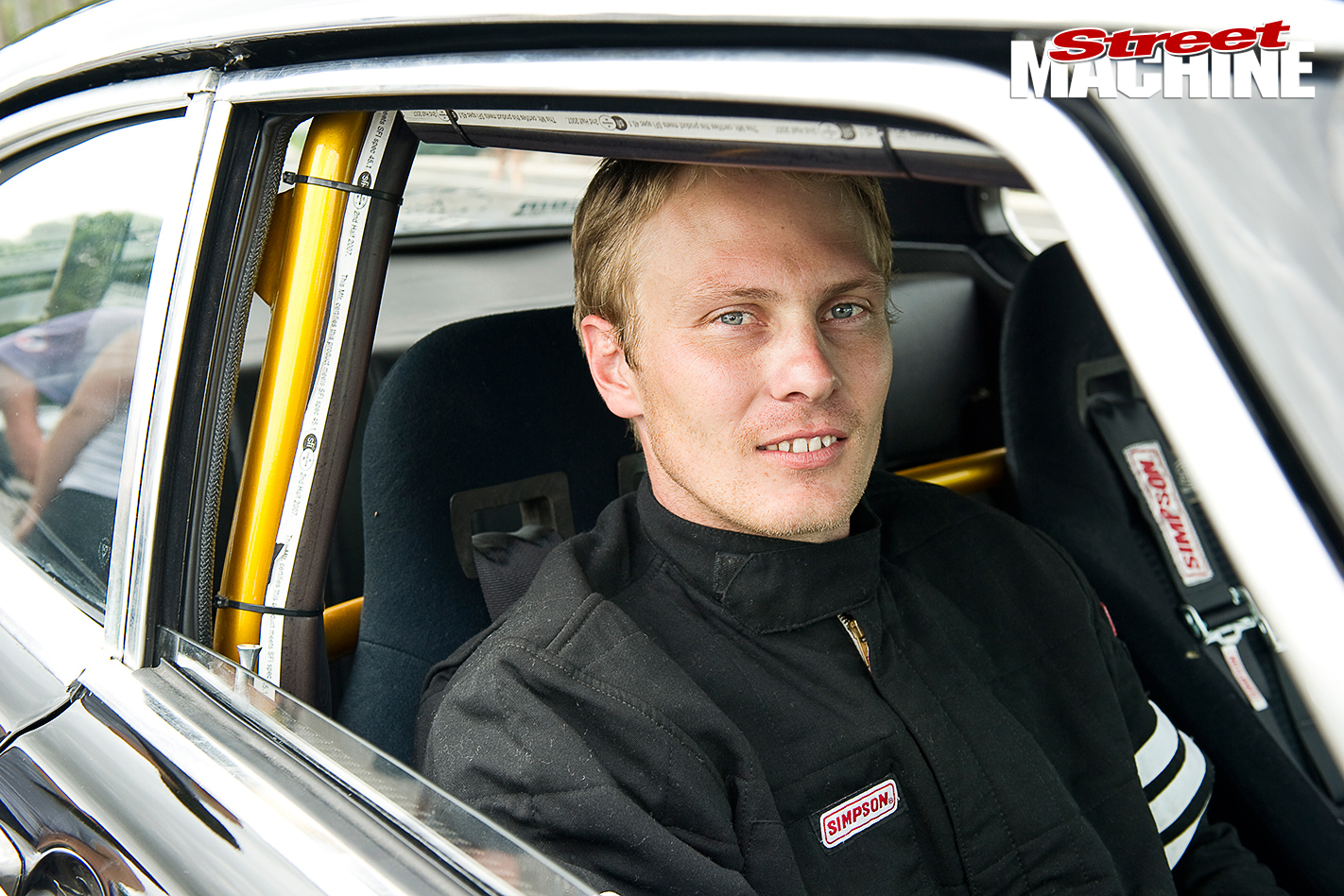 As for the Capri’s streetability, Stu’s happy just cruising. “It’s beautiful mate, awesome. It’s just doughy, you know? You can idle anywhere you want, and with tall gears and 28in-tall tyres, it just idles around. So it’s really tame.”

Tame on the street, scorching on the track. Is this Australia’s best true street car?