Peter Deguara’s ’23 altered is the quickest V8 Holden-based drag car on the planet, running a best of 7.1 at 187mph down the quarter-mile

PETER Deguara’s ’23 altered is the quickest V8 Holden-based drag car on the planet, running a best of 7.1@187mph down the quarter-mile. “It’s pretty brutal off the line, with sub-1sec 60-foot times,” Peter says. “That was the old HQ-headed 332-cube combo, too. I’ve stepped it up to 355 cubes and –9 heads with the latest combo.”

Yes, you read that right: 7.1 seconds over the quarter with early cast-iron heads, 28psi of boost, redlining at 8500rpm and only 332ci!

So how did an altered end up with a Holden in it instead of a run-of-the-mill Chevy?

“I started out with tough streeters and Super Sedan-class drag cars back in the 80s,” Peter says. “Mostly LH Toranas, as you didn’t need an engineer’s report for rego with a 308; I’ve just stuck with the motors ever since.

“Back then it was all about getting as much as possible out of stock engines, so that’s what we did. We raced in street trim, full exhausts and all, running 11s. It just progressed from there and got to the point where the street cars were becoming a bit of a problem, so we went to the altered.”

Over the years there have been four different Holden combos in the altered. 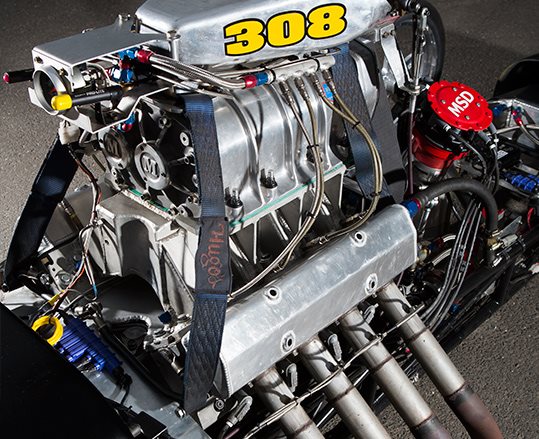 Next came a 332ci bottom end using the same HQ heads with a new blower. ”It ran the 7.1 times,” Peter says. “We were leaning on it pretty hard; eventually it bent the crank and cracked the mains.”

The third combo was 353ci, running ported VN heads with big valves. “We couldn’t make the power we wanted and blew a few head gaskets.”

The latest combo is 355ci, producing upwards of 1500hp. There’s not much Holden left, only the block and a few bolts. Rod Rainford from AED does all the machine work, and the engines are built in-house at Williamstown Dyno Tune, which also makes all its own parts like the front-mount magneto drive, intake manifold, crank support, timing cover and a host of other trick little bits to put it all together.

The EFI-series 5.0L block is o-ringed, but interestingly the heads are not. “I don’t believe in receiver grooves,” Peter says. “We run an extra two head studs per cylinder to help hold down copper head gaskets. The –9s have had a fair bit of porting work done to them and been fitted out with 2.1-inch intake and 1.65-inch exhaust valves to get them flowing how we wanted.” 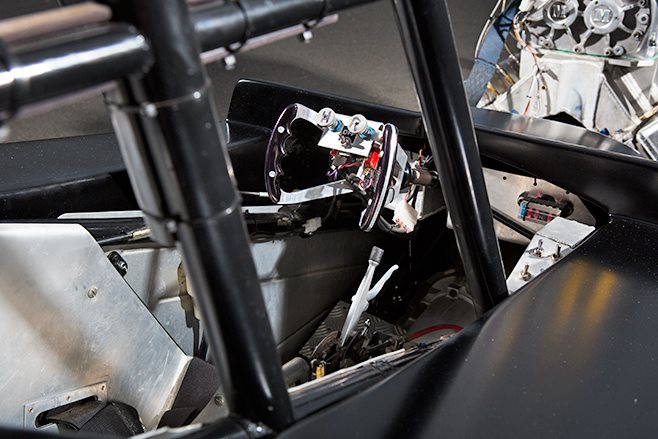 The COME billet crankshaft is secured in place with stepped four-bolt spayed billet caps, with 10:1-comp CP pistons swinging off Bill Milner alloy rods. Sleeved lifter bores to suit LS1-style lifters and dry sump are the only real mods to the oiling system, with the three-stage Weaver pump set at 50psi at idle, going up to 100psi at redline (8500rpm). The Bob Fisher-built 6/71 blower is set at 28psi, with a 20A Pro Mag supplying the sparks.

“We’ve got to the point where the factory block is having issues,” Peter says. “We really want to stay Holden, but we may have to go to a Chev, though we’ll be looking at the Torque Power blocks first.”

For now though, getting the 355 going quicker is the priority. “We added about 250hp of fuel to the tune-up to get it running right. We’re aiming for sixes at over 190mph once it’s fully sorted.”

Tony Webb’s poo-brown LJ Torana is a brilliant little sleeper. It’s full nana-spec, featuring factory stainless trim, 2850cc badges and mesh sunvisor. Only the wheels and rollcage give any hint that the street ’n’ strip missile might not be what it seems. 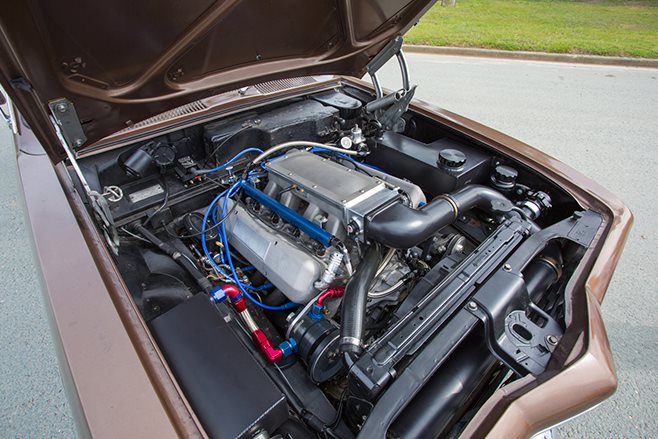 Stick your head under the bonnet and you’ll find a Dandy Engines-built 355ci Holden V8 with cast-iron heads, off-the-shelf headers and a COME EFI intake, controlled by a Haltech ECU. Nothing too crazy, and definitely not what you expect in a car that runs 8.45@163mph!

The secret is up the back sitting where the factory fuel tank used to be: an 80mm BorgWarner turbo.

Running 20psi boost and pump 98-octane fuel, the beast doesn’t even need an intercooler. By the time the boosted air hits the engine it’s cool enough not to need one. 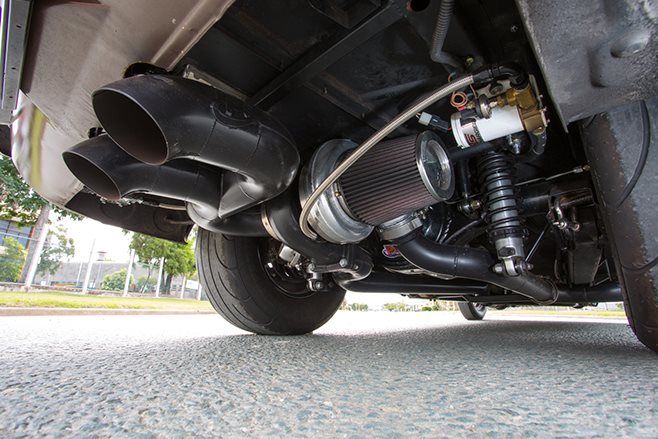 “It’s not bad for a little ol’ Holden,” Tony says. “We’ve done about 5000km on the street with it now. I even drove it with the family to Victor Bray’s 57th birthday party.”

We featured Todd Foley’s VH Commodore back in SM, June ’14, when it had 540hp and was knocking on the door of the nine-second zone.

Running a torquey 383ci Holden stroker built by James at MCE, the genuinely driven streeter was running hand-ported heads and a smaller cam and with lower compression. But now they’ve slid a bigger stick into it and added CNC-ported, cast-iron VN heads with 13:1 comp, the slick-looking machine has run as quick as 9.87@141mph at Heathcote. All on pump E85 fuel! 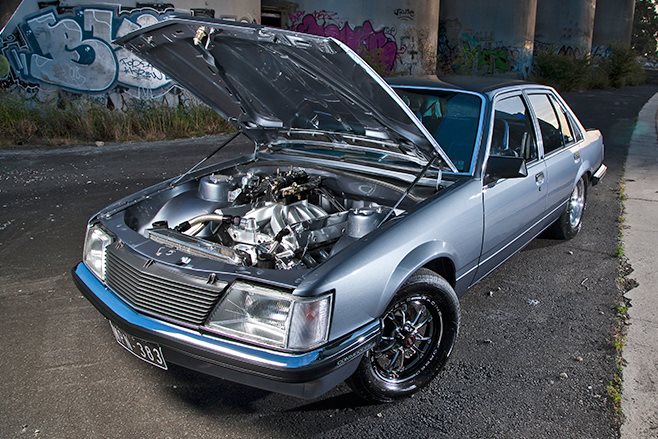 High nines is stout for any car, but more so with Todd’s beast because it runs those numbers in street trim. He doesn’t even uncork the pipes!

He’s even driven it from his home in Geelong up to Calder Park, run 9.92@138mph and then drove it back home again. That’s a trip of about 190km; impressive stuff. 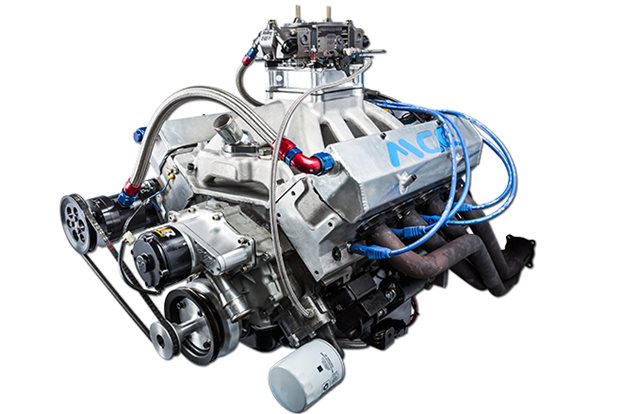 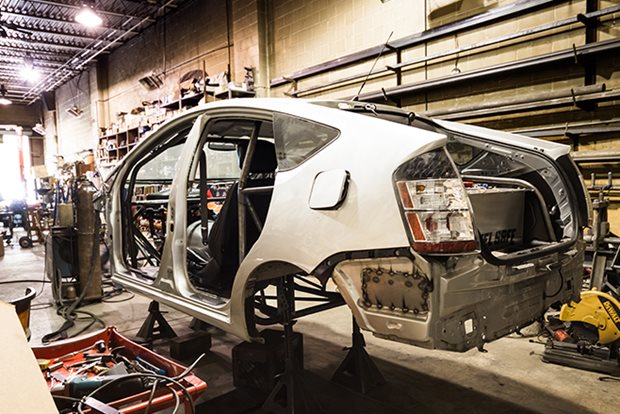 American Racing Headers is jamming a 1000hp+ blown Hellcat motor into a Prius for the ultimate sleeper! 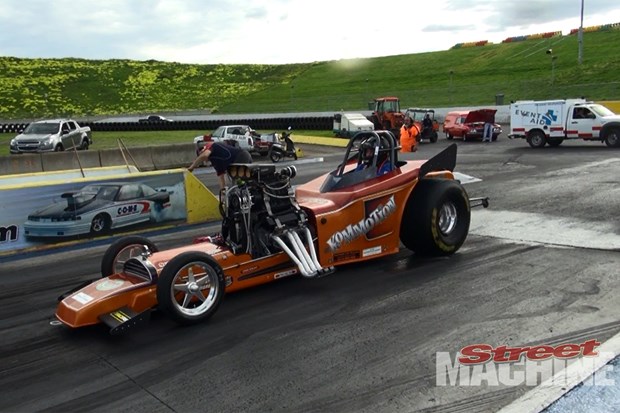