Chris Deegan was aiming for a neat Summernats cruiser with his LC Torana, but this stunner was the result

Chris Deegan originally planned to build a tough little cruiser to enjoy at Summernats and Powercruise. Eight years later this stunning seven-second beast was the result

LIVING in Goulburn isn’t easy, what with it being the police capital of NSW. Chris Deegan soon grew sick of hanging out on the side of the road every time he took his pride and joy for a spin so he decided it was time to build a car purely for off-street enjoyment. However, the final form of this 1971 LC Torana isn’t quite what he had in mind eight or so years ago. 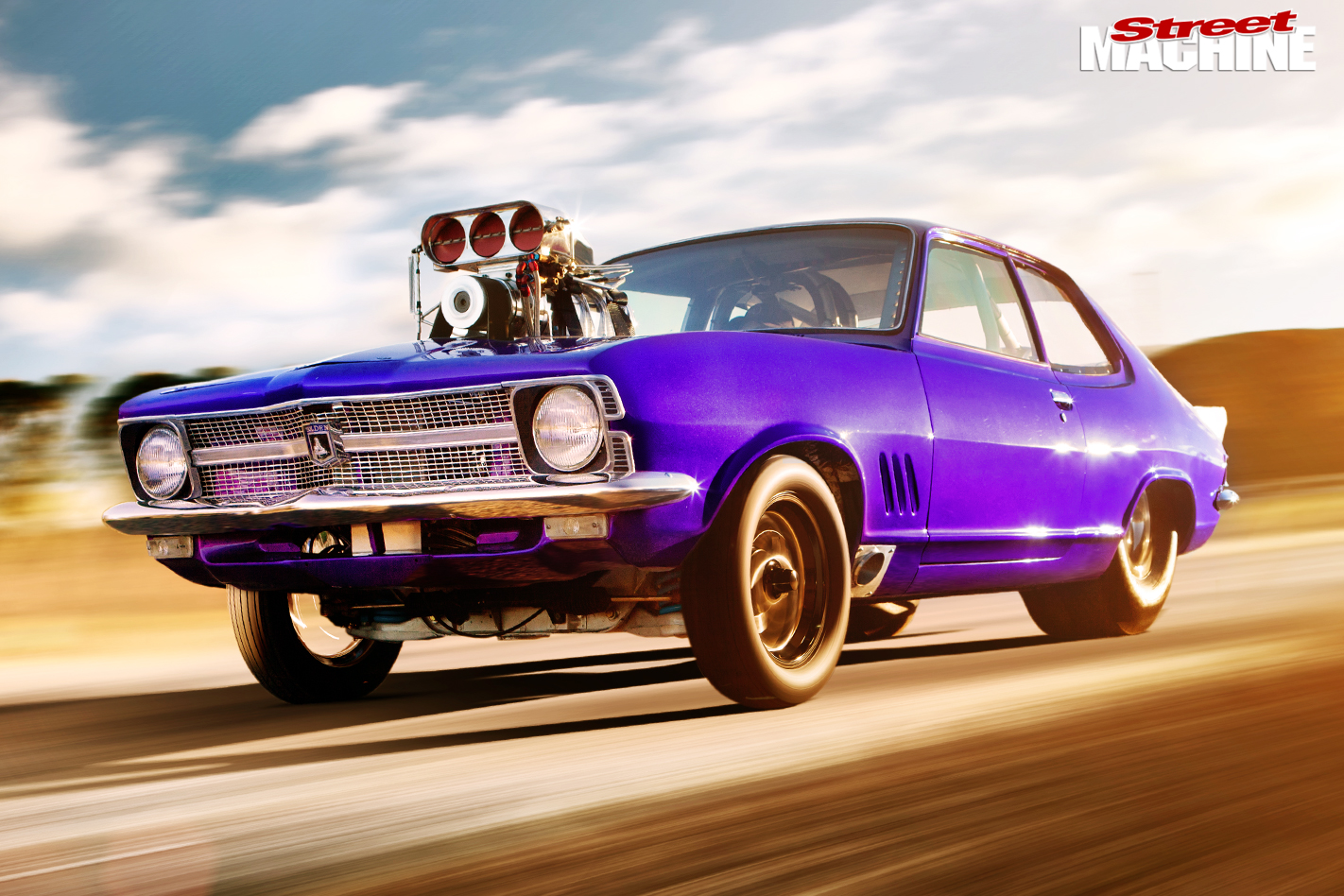 Chris teamed up with Adam at Raceline Fabrications in Wollongong, intending to simply drop in the tough small-block from his previous HJ and add a set of mini-tubs and a six-point ’cage so he could enjoy the car at Summernats and Powercruise. Maybe the occasional sneaky squirt around the streets when the constabulary were looking the other way.

“I just wanted a tough car that I could take to events and have a bit of fun in. Needless to say things got out of hand,” Chris laughs.

And eight years later this is the result — after Adam asked his revhead customer if he wanted to supersize the build. A three-quarter chassis with full tubs and a Funny Car ’cage form the basis of a beast capable of seven-second passes. 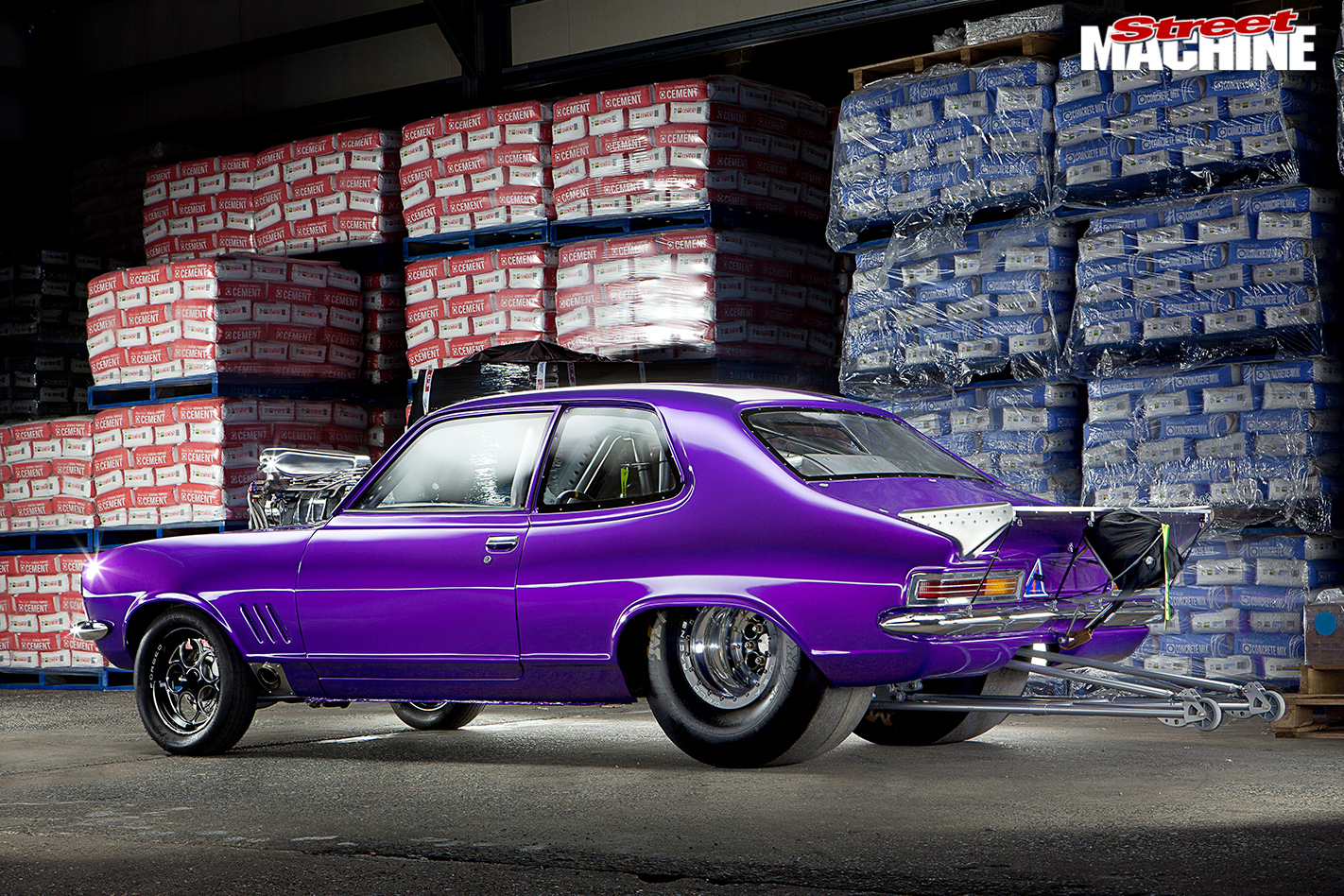 Now, most people who build a car like this do so knowing what lies ahead — 400 metres of nice, smooth track, then the braking area and sandpit, followed by one hell of a solid wall. But having never, ever been down a dragstrip before, Chris has an eye-opening first ride ahead.

The lads at Raceline spent their days cutting, bending and welding to get the rear end of the car set up — and having to redo things on occasion as the plans evolved.

Along with building the chassis and extensive rollcage, Raceline also set up the four-link rear to get the 33x10½ slicks biting hard and firing the Torana down the straight and narrow with minimal fuss. 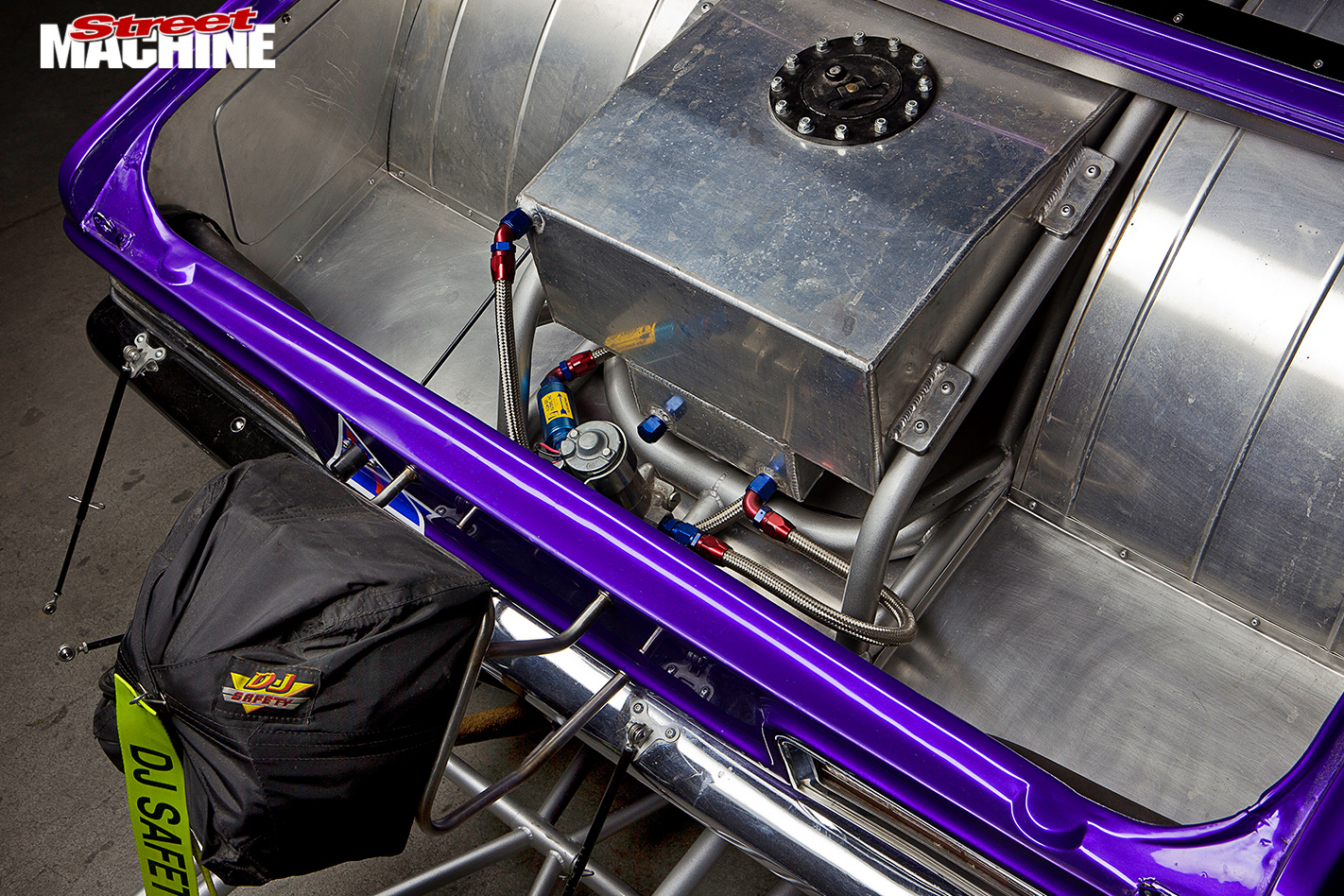 With a lot of the fabrication out of the way, the boys at Rylees Paint & Panel received the bare shell. After fixing a small amount of bodywork, they applied the custom-mixed purple paint from end to end, and through an engine bay that Chris had spent countless hours smoothing and modifying at home.

A fibreglass bonnet and boot lid were painted at the same time, with Lexan windows dropped in, in place of the side and rear glass.

“I didn’t want a show car, just something neat,” Chris says. Even so, the quality of work in the build is dangerously close to being a judge-pleaser. 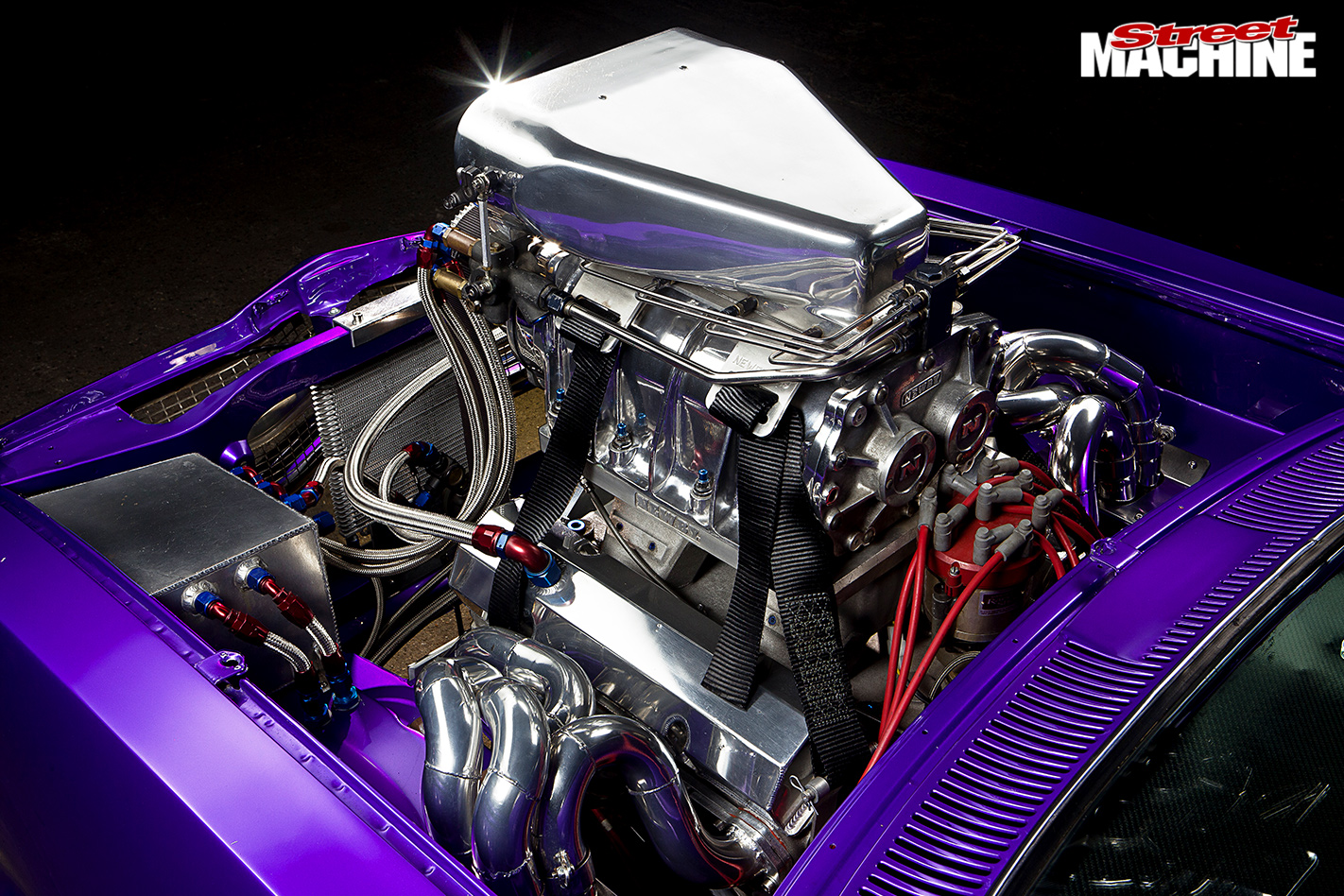 Somewhere towards the end of the build, Chris and Adam decided that the original small-block wasn’t going to do the car justice. Cue Aaron from APM being assigned the duty of bolting together a combination that Chris refers to as “the temporary engine”.

Aaron started with a GM 010 block. A Scat crank is responsible for shunting alloy Venolia rods and Diamond 10.5:1 pistons up and down the bores, while Brodix alloy heads cap the block, sitting either side of a Newby manifold. A Birdcatcher injector hat controls the air and methanol mix that the 6/71 blower blasts down the engine’s throat. 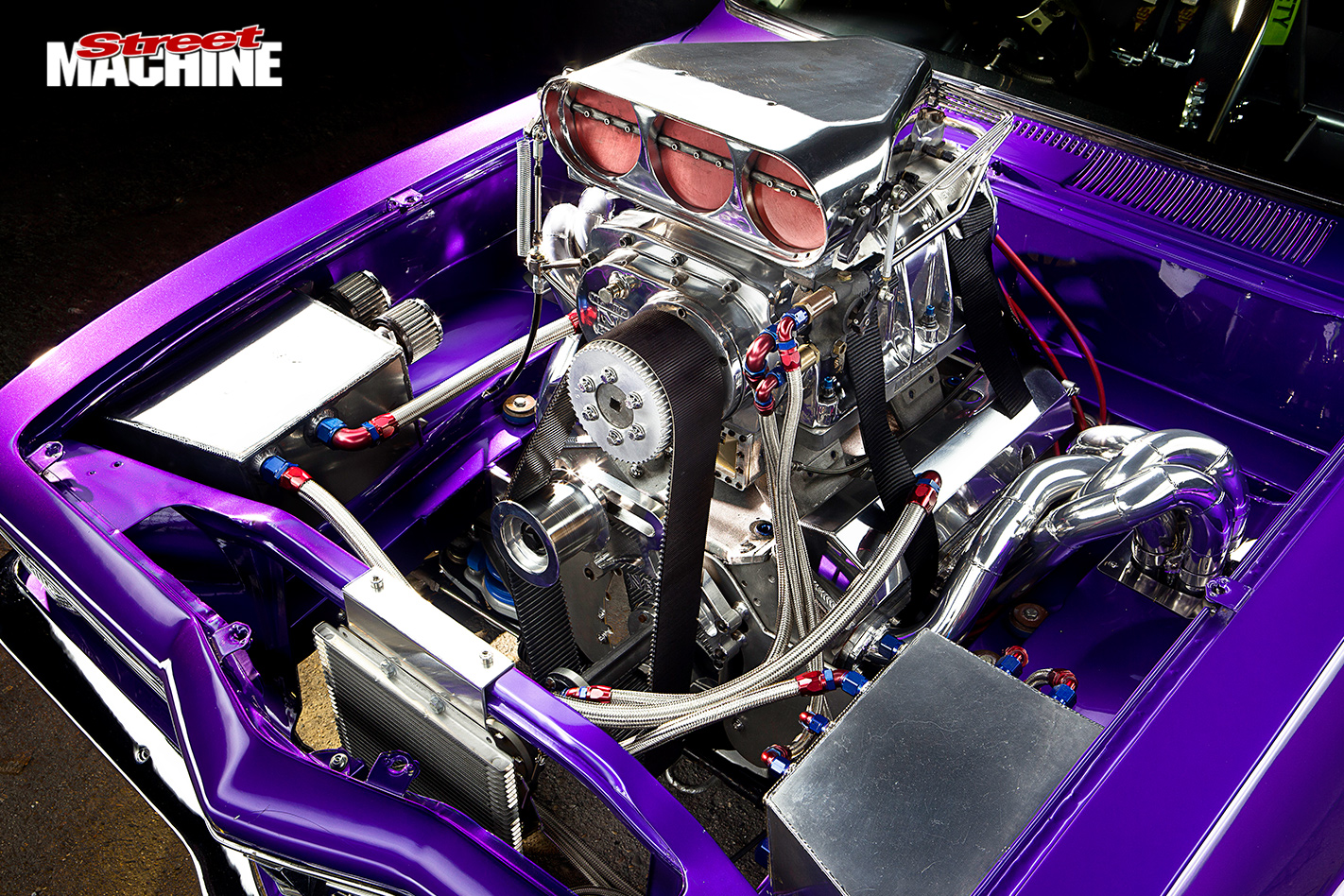 Filling some of the remaining engine bay space is a set of pipes that could be classed as a work of art. While visiting one day with a box full of bourbon and steampipe bends, Chris’s good mate Gypsy pieced together the pipes and then sent them off to be coated.

A small methanol tank resides on one side of the bay, feeding the Enderle cam-driven fuel pump. A Holley Black pump refreshes that tank from a boot-mounted fuel cell.

On the other end of the motor, a 6200rpm TCE converter mates the crank to the gearbox. Al’s Raceglides was in charge of supplying a two-speed Powerglide capable of handling the torque, and a very short nine-inch diff with fully floating 35-spline axles rounds out the driveline. 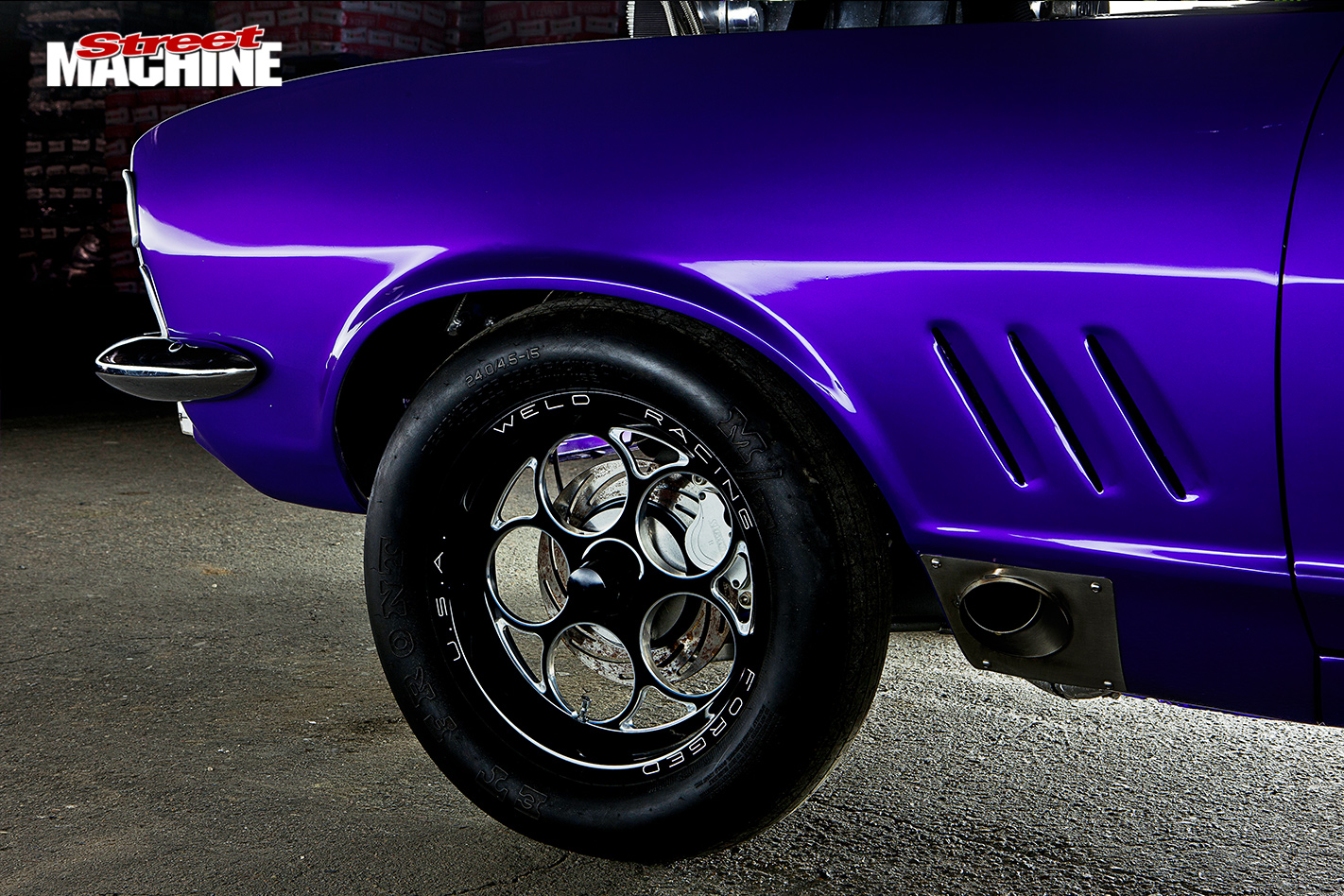 An uncommon but worthwhile mod - spindle-mount front wheels. Not many LCs run these as they're not available to fit off the shelf but smart thinking custom machining made it happen

Something you don’t often see is spindle-mount wheels on the front of a Torana.

“I wanted spindle-mount wheels but we couldn’t buy the parts so we made our own. It was one of the best additions to the car,” Chris says.

Black Weld Magnum wheels highlight the paint and while the fronts are skinny, the rears wear the increasingly popular 33x10½ rubber. 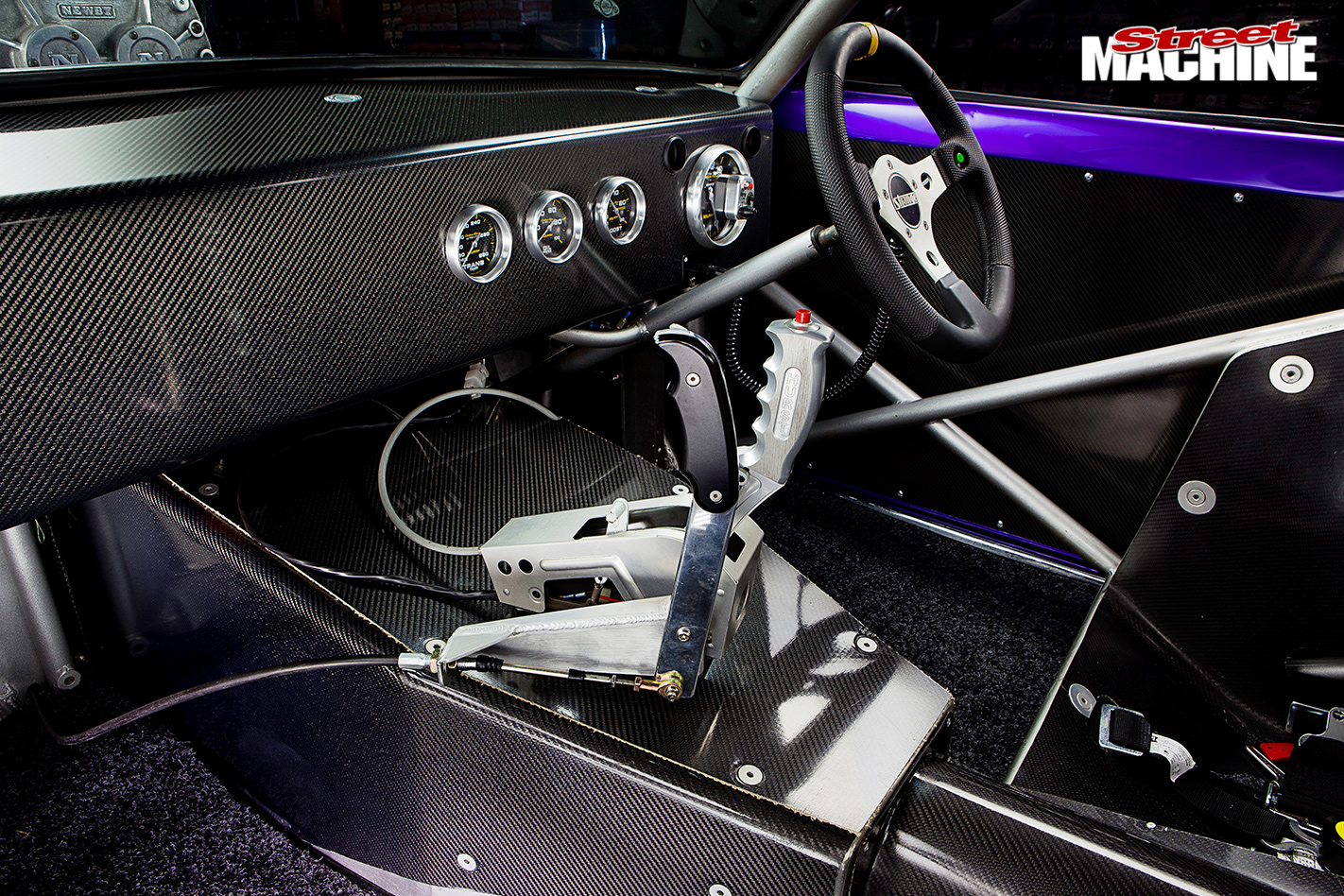 It's all race on the inside with carbon-fibre used for everything from the dash to the seat, though the tunnel copped Kevlar reinforcement too

“I figured since I had no passenger seat or cooling system it wasn’t legal for Pro Street so the only other option was Outlaw 10.5,” Chris grins.

Strange front brakes work with Wilwood rears but the majority of the stopping force will be supplied by the DJ Safety parachute mounted neatly under the alloy wing. 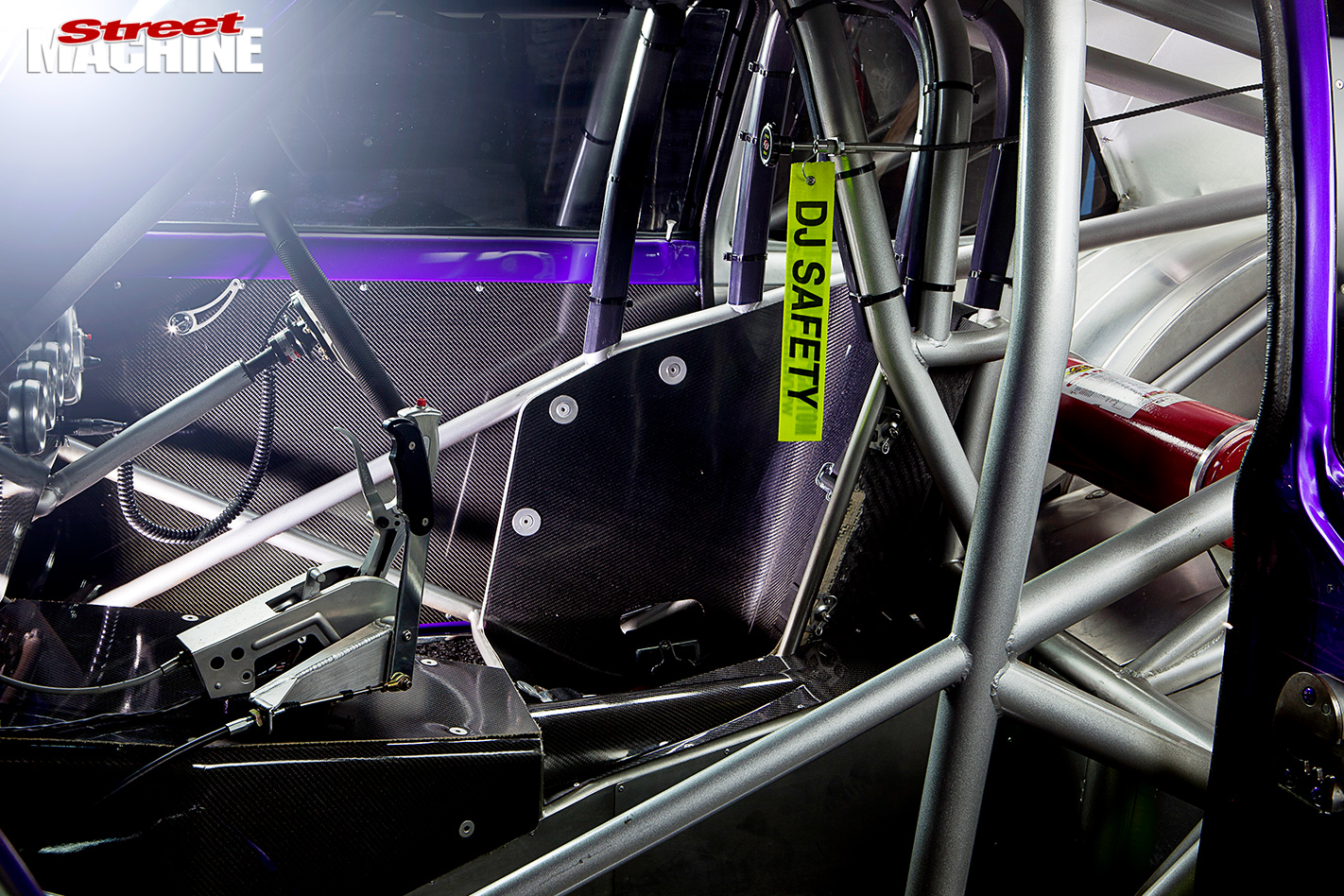 Heading indoors, saving weight and looking cool were the guiding principles, with a carbon-fibre dash, tunnel, door trims and seat. The Grant tiller is removable to help Chris squeeze past the Funny Car ’cage. Auto Meter Carbon gauges advertise what the engine is doing and a Hurst shifter stirs the ’box. The roof-mounted switch-block controls ignition, the fuel pump and the starter, while another lever beside the shifter shuts off the mechanical fuel pump. Behind the seat is a Cold Fire system to extinguish any unwanted flames at the touch of a button. 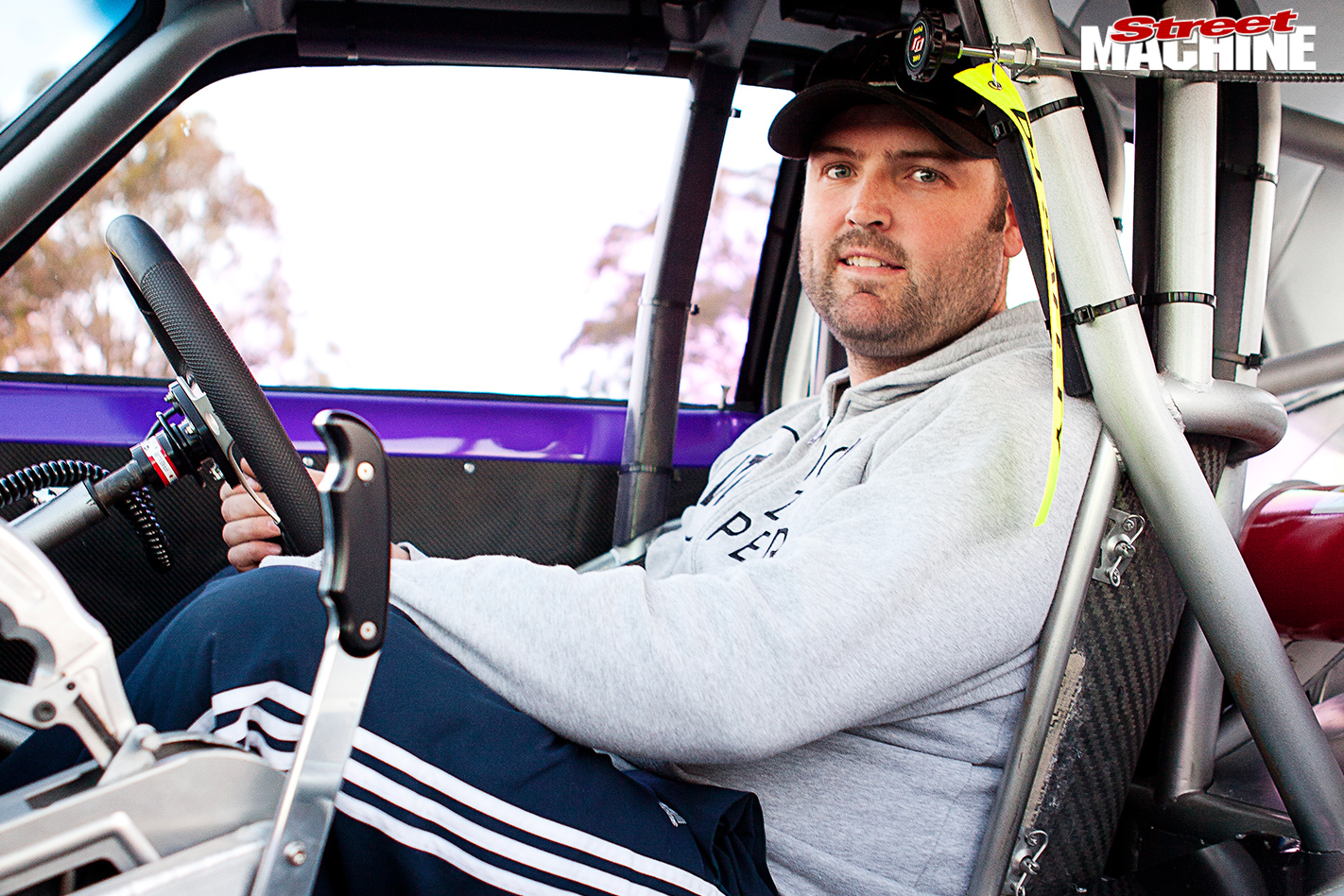 While the car is finished — for now — it is yet to see a track. Chris is looking out for a much bigger engine to properly test the car’s abilities though at the moment he’s happy to cut some steady passes. After all, you have to walk before you can run. Or in this case, fly.