LOOK, let’s just get this out of the way right up front. What Tom McGilton did to his brand-new ZL1 Camaro is crazy. When the local Kansas City Chevy dealer, Van Chevrolet, told Tom it was getting a 2013 ZL1, he bought it. “But when I told the salesman what my plan was for the car, he wanted me to give it back,” he says. 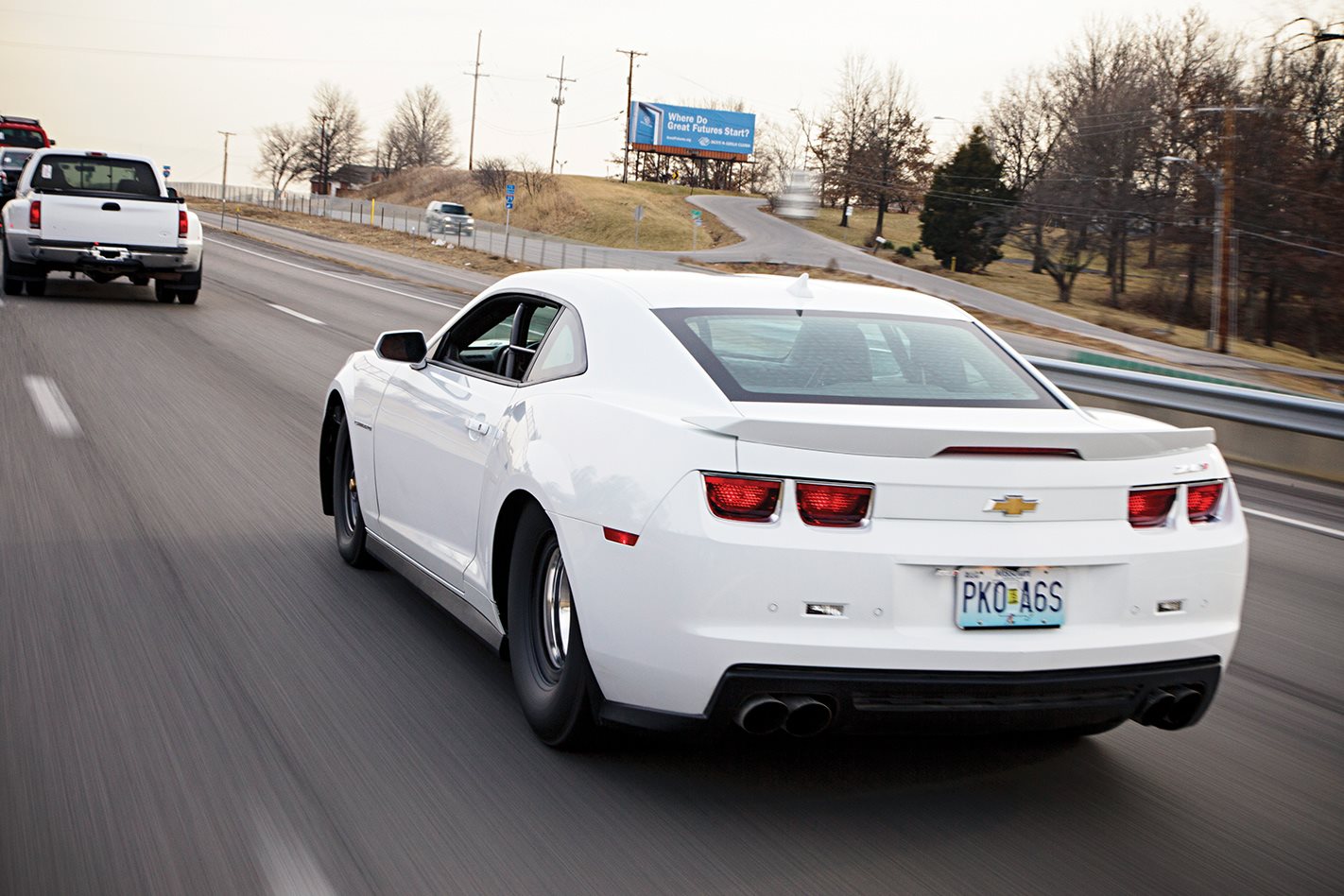 But he didn’t. Instead, he drove it to Larson Race Cars in Oak Grove, Missouri. Once there, he proceeded with his plan, which was to tear it completely apart. He took out the entire interior, windows, suspension – everything. Then he and Larry Larson schemed to build a twin-turbo, 2500hp cruiser to run at Hot Rod Drag Week. 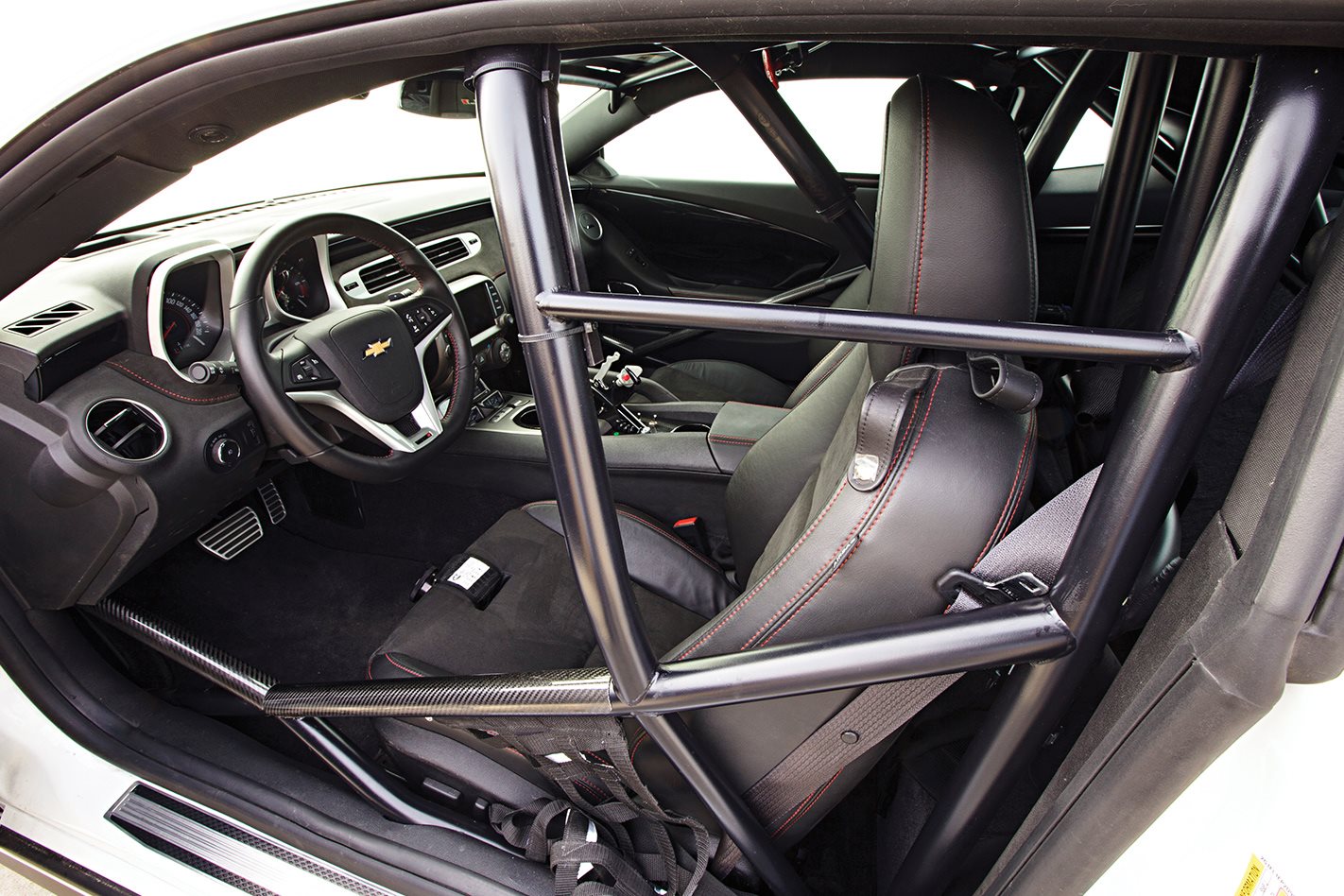 With the rollcage in your face, this is looking more like a proper race car. But the car has been built to help Tom withstand the rigours of Drag Week, where the road-driving legs are just as important as the actual racing

Why call it a cruiser? Because all of the interior, insulation, stock audio, air conditioning, head-up display, Bluetooth, and all of the factory niceties – like the electric seats and reversing camera – were retained. Perfect for making those 250-mile treks between Drag Week strips just like a cruise in the country. “I loved it when we took our air-conditioned ’34 coupe on Drag Week and passed all those guys sweating in their cars, while we were as comfortable as can be,” says Tom, explaining his rationale. 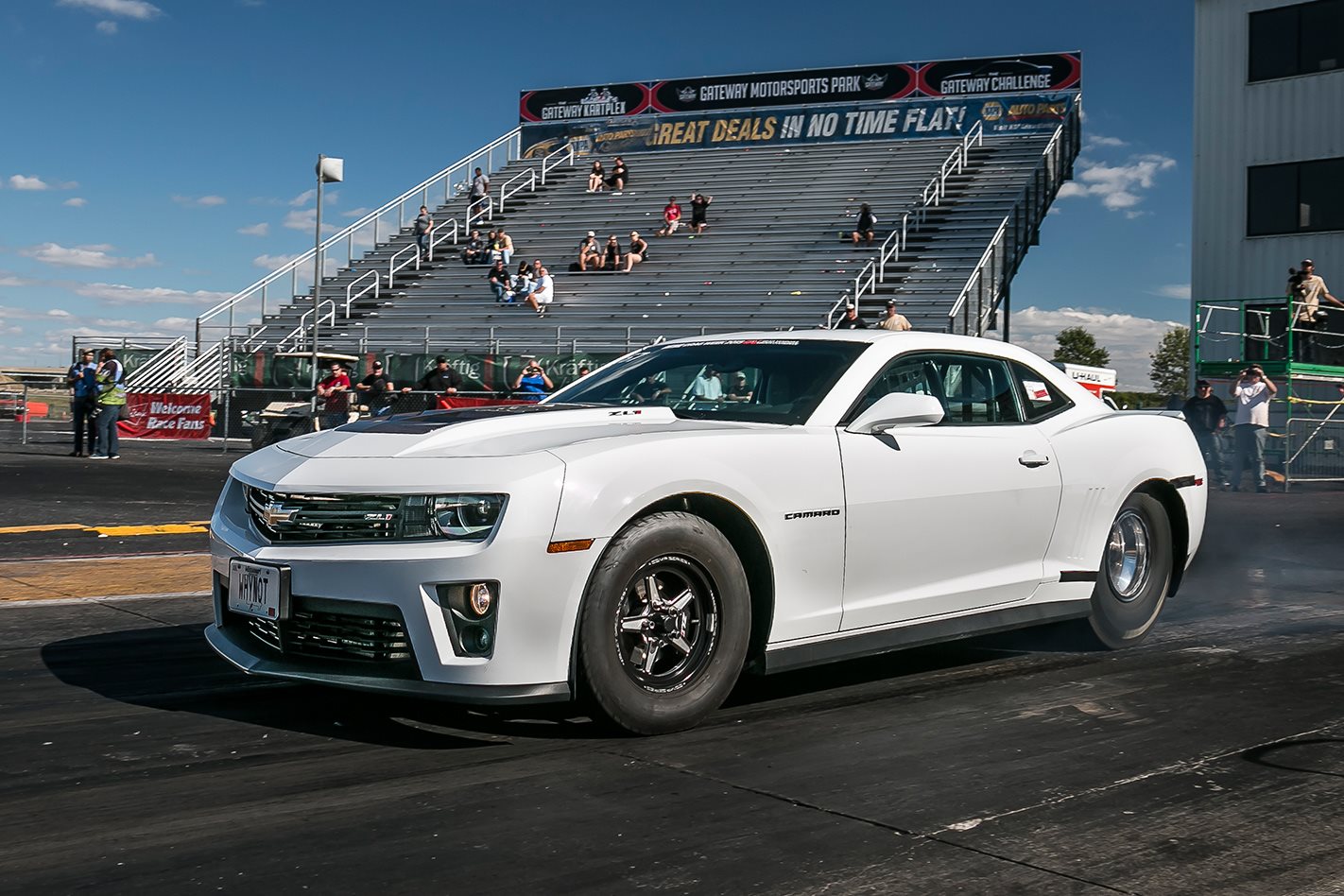 Wrenching and running your car in the Drag Week environment, in that Midwest summer heat, can be like running inside a sauna of trans fluid mixed with gear lube. The routine of not finding relief until late at night in your air-conditioned motel room – if you’re lucky – tears participants down. Tom wanted none of that. He figures you can’t control what you can’t control, so why not do what you can to make the insanity a little more comfortable? 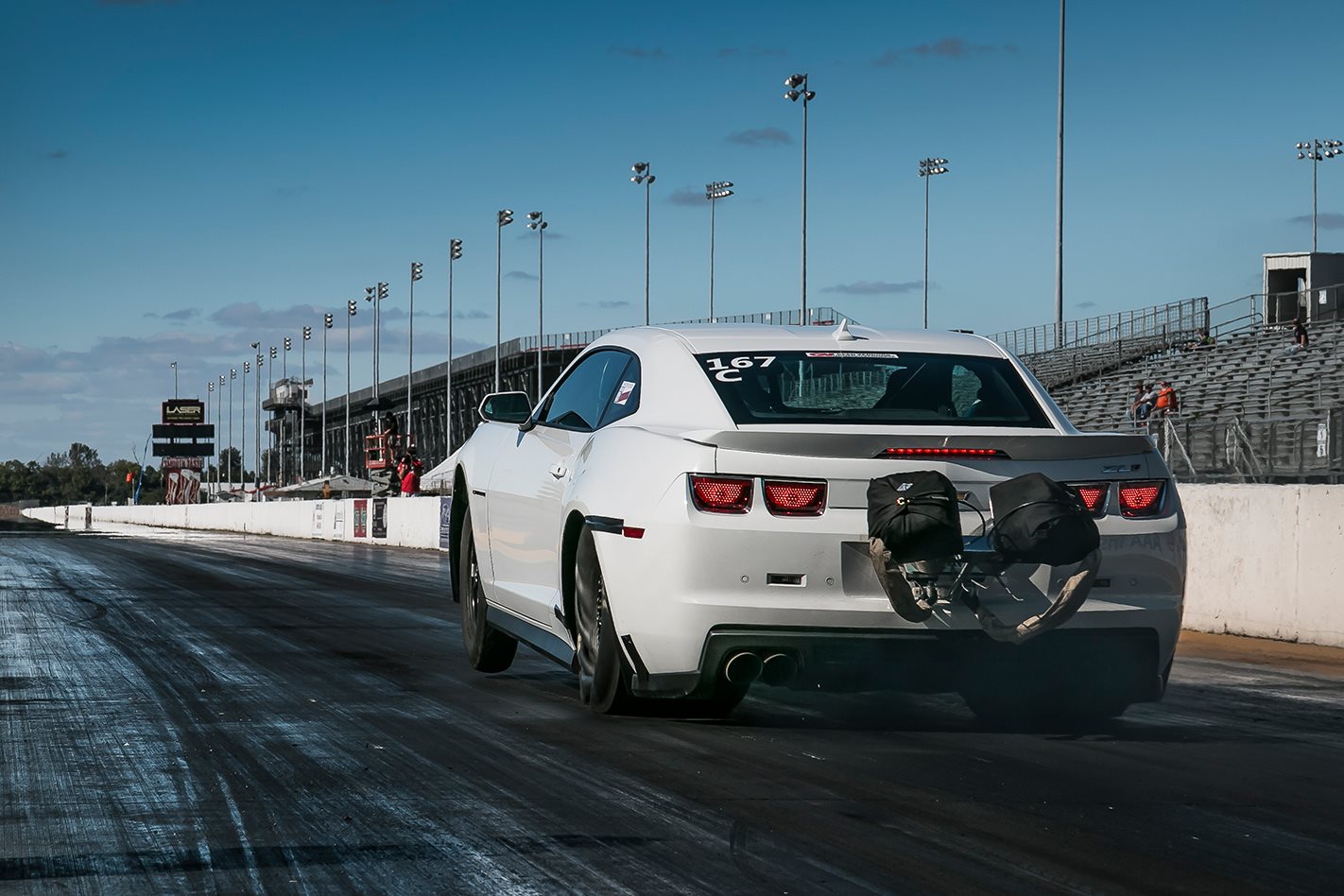 You’ve heard of Larry Larson. He’s won Drag Week five times in a row, and he’s the dude who got into the fives with his Drag Week S10 truck at the Street Car Super Nationals in 2014. He built Tom’s Camaro, combining what Tom thought he wanted with what Larry has learned through the years about being competitive at Drag Week. While the original 580hp supercharged LSA engine is finding a home in “an old truck”, Tom had Burlington Performance in Raytown, Missouri, build a monster twin-turbo big-block engine for the Camaro. 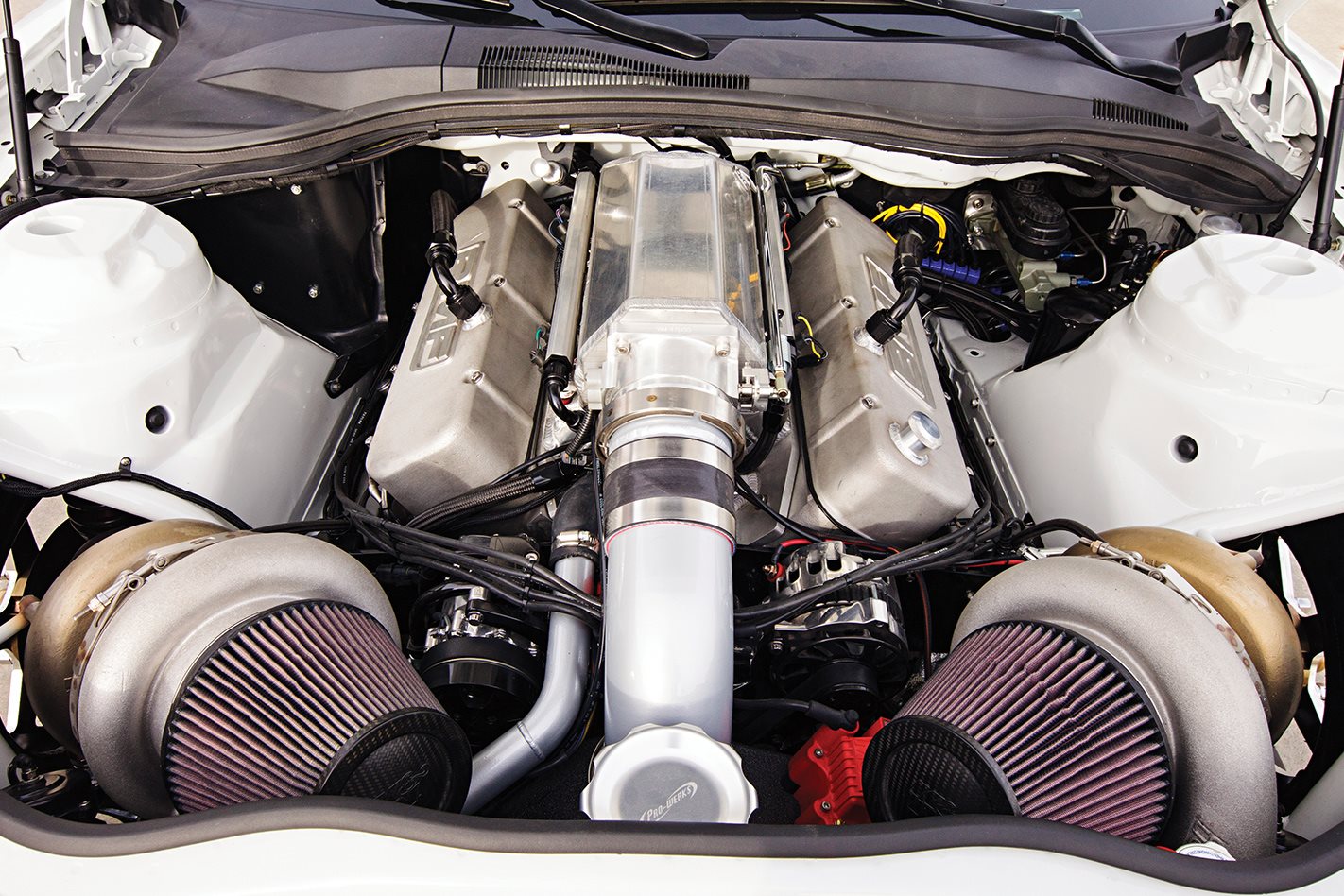 Starting with a CFE billet-aluminium big-block, Burlington combined a Callies Magnum crank with Oliver billet rods and Diamond 9:1 flat-top pistons. The heads are BMF 405cc items with 2.325in intake and 1.880in exhaust valves. A custom-ground solid-lifter camshaft was chosen by Proline Racing’s Steve Petty, with a fairly wide lobe separation of 118° and 272/276° duration at 50thou. The lifters and rocker arms are by Jesel. 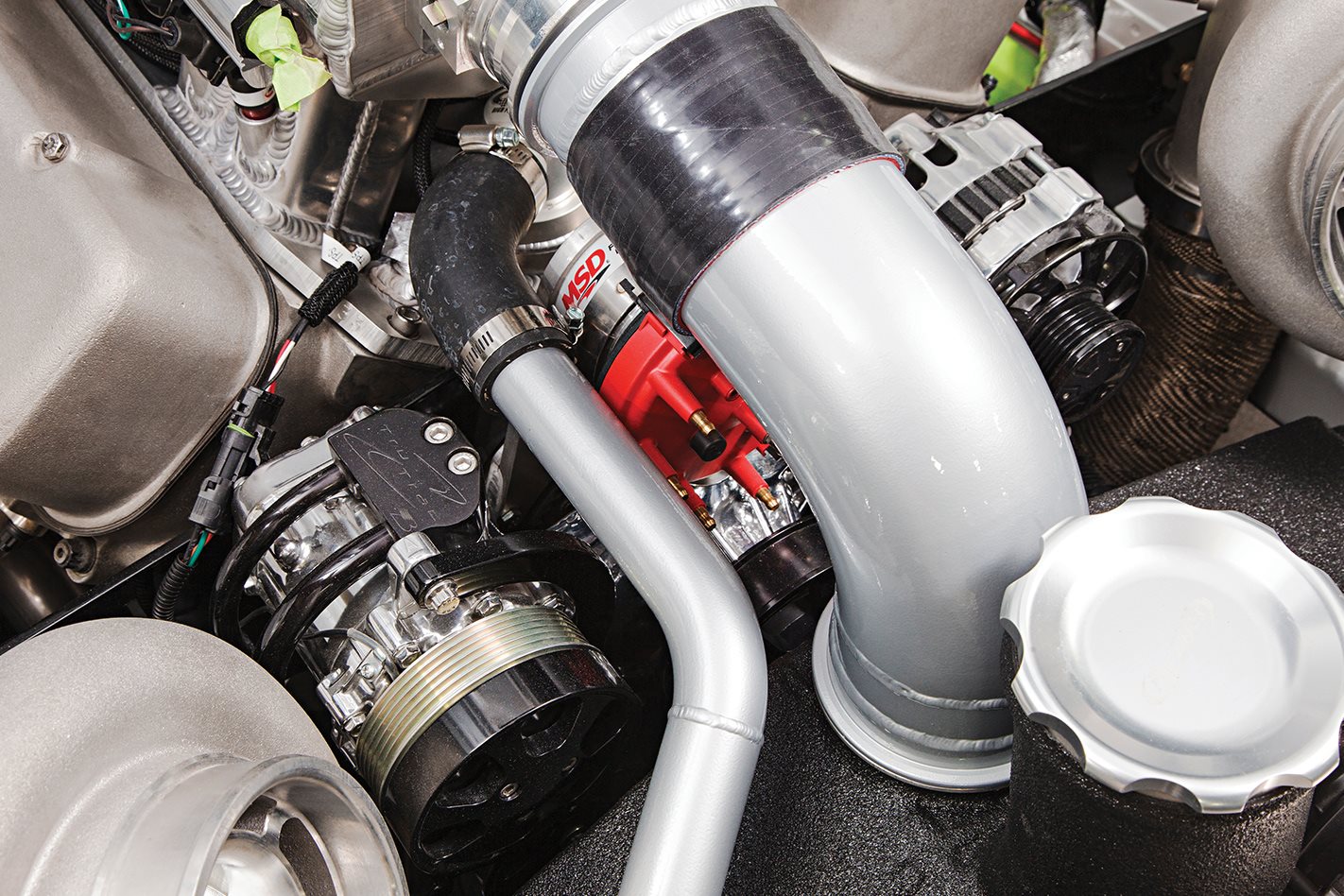 Nestled below the throttlebody snout is a cam-driven MSD distributor, which shares space with an air-conditioning compressor and Power Master alternator, both driven by a Billet Specialties Tru Trac serpentine system

On the top end are two Precision Gen 1 88mm turbos, breathing into a CFE Racing sheet-metal intake with a Larson Race Cars air-to-ice water intercooler. Wastegates are Precision 66mm units. The entire fuel system is by Aeromotive with Precision injectors, while a Big Stuff 3 ECU controls the engine. 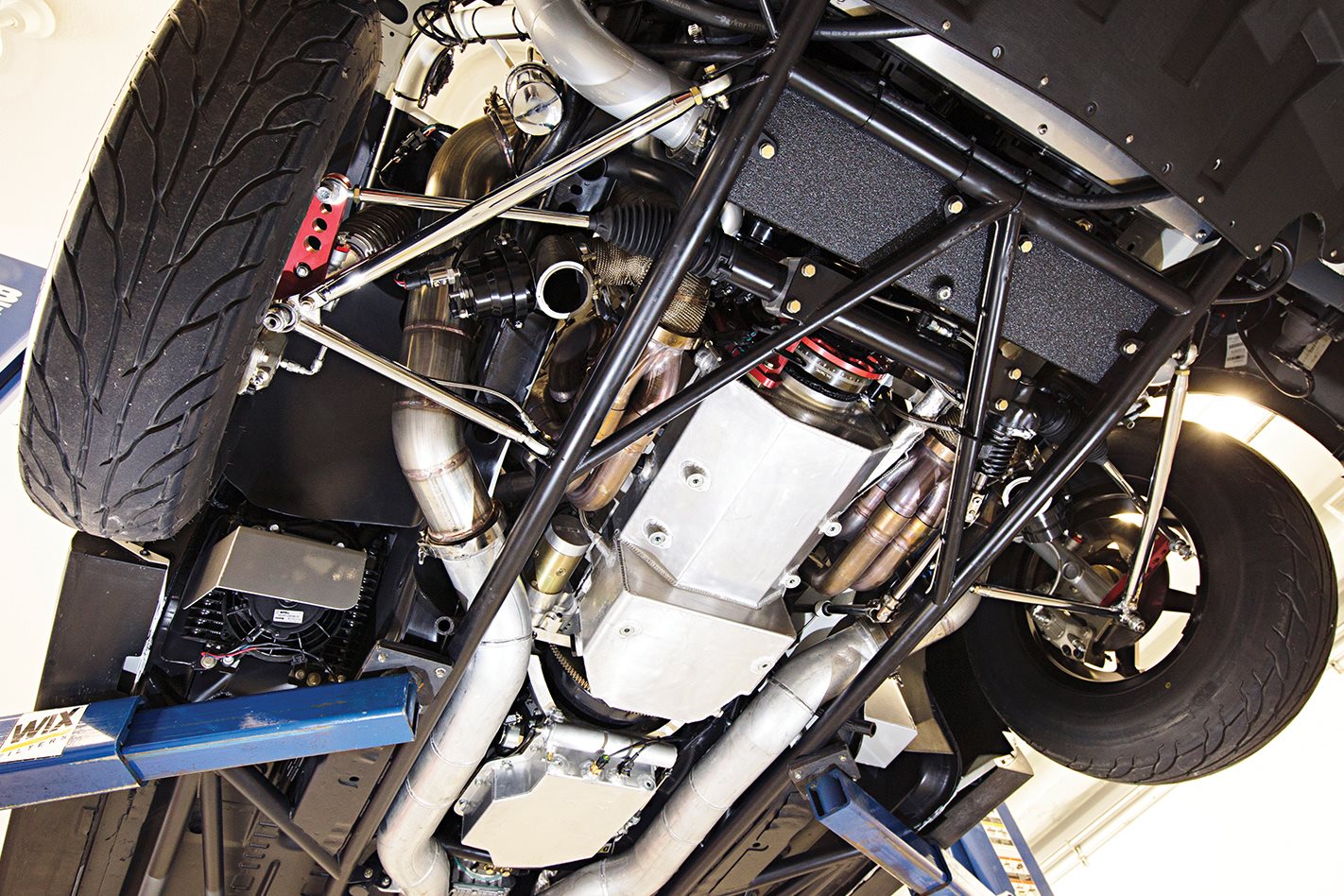 In the ignition department, an MSD cam-driven distributor triggers MSD coils with a Power Grid controller and MSD 8 ignition box. 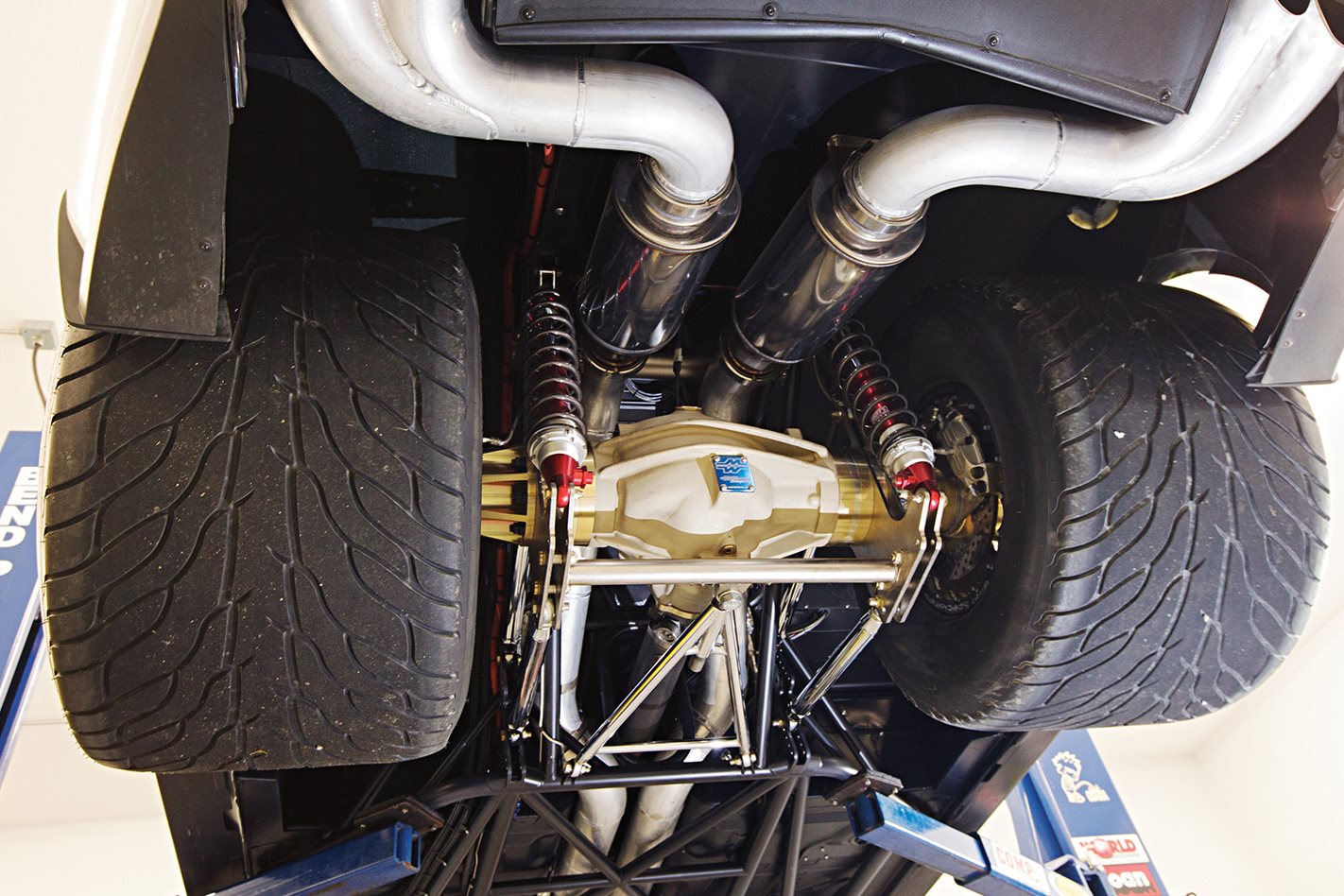 From this angle it becomes apparent this is not a stock or even mildly massaged Camaro. A Mark Williams Enterprises full-floater axle spins 33/22.50-15 Hoosier hoops on 15x15in M/T billet wheels. All of this is suspended by a Larson four-link and Santhuff coil-overs, and tied to the front suspension. The 4in dual exhaust ends with stock-looking ZL1 tips built by Larson 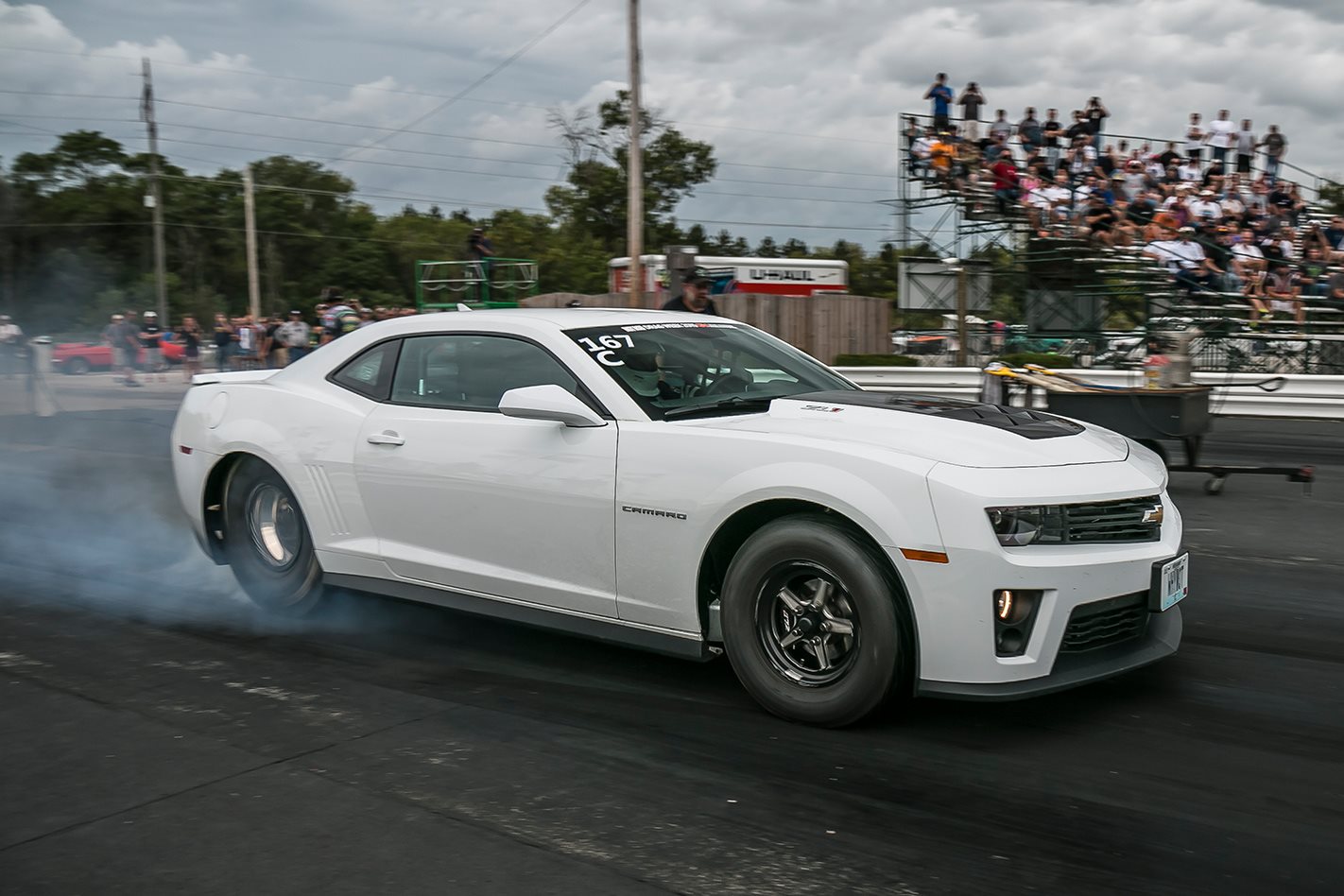 Larson Race Cars performed the chassis changes, including tying the custom four-link rear end to the front subframe with a full-length tube chassis, with Santhuff shocks front and rear. The stock front end was replaced with a Santhuff strut assembly. Mark Williams disc brakes are at the four corners, controlled by a Strange master cylinder. 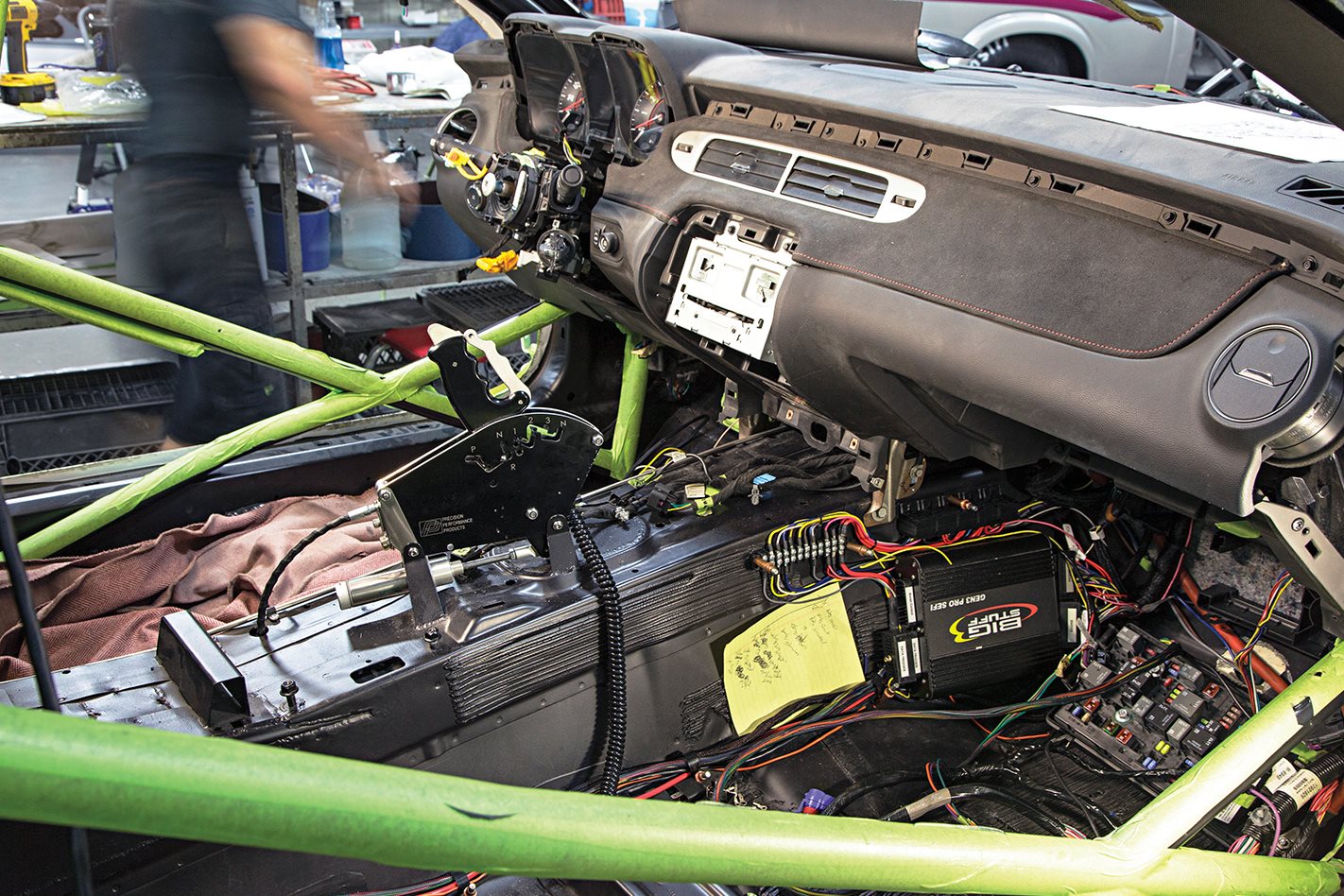 The Camaro took 14 months to complete, and this build photo reveals the horror show of putting back what you first took out. The Precision Performance shifter controls the Rossler Transmissions automatic nestled below the stock console

After a full rollcage was built, the entire car was reassembled, taking care not to scratch any of the factory Summit White paint or black leather interior. “Except for the factory traction control, cruise control, and remote start, everything from the factory was put back into the Camaro,” Tom says. So other than the rollcage, and the billet-aluminium 15-inch M/T wheels with Hoosier hoops down back, there’s no visual hints to the Camaro’s potential. 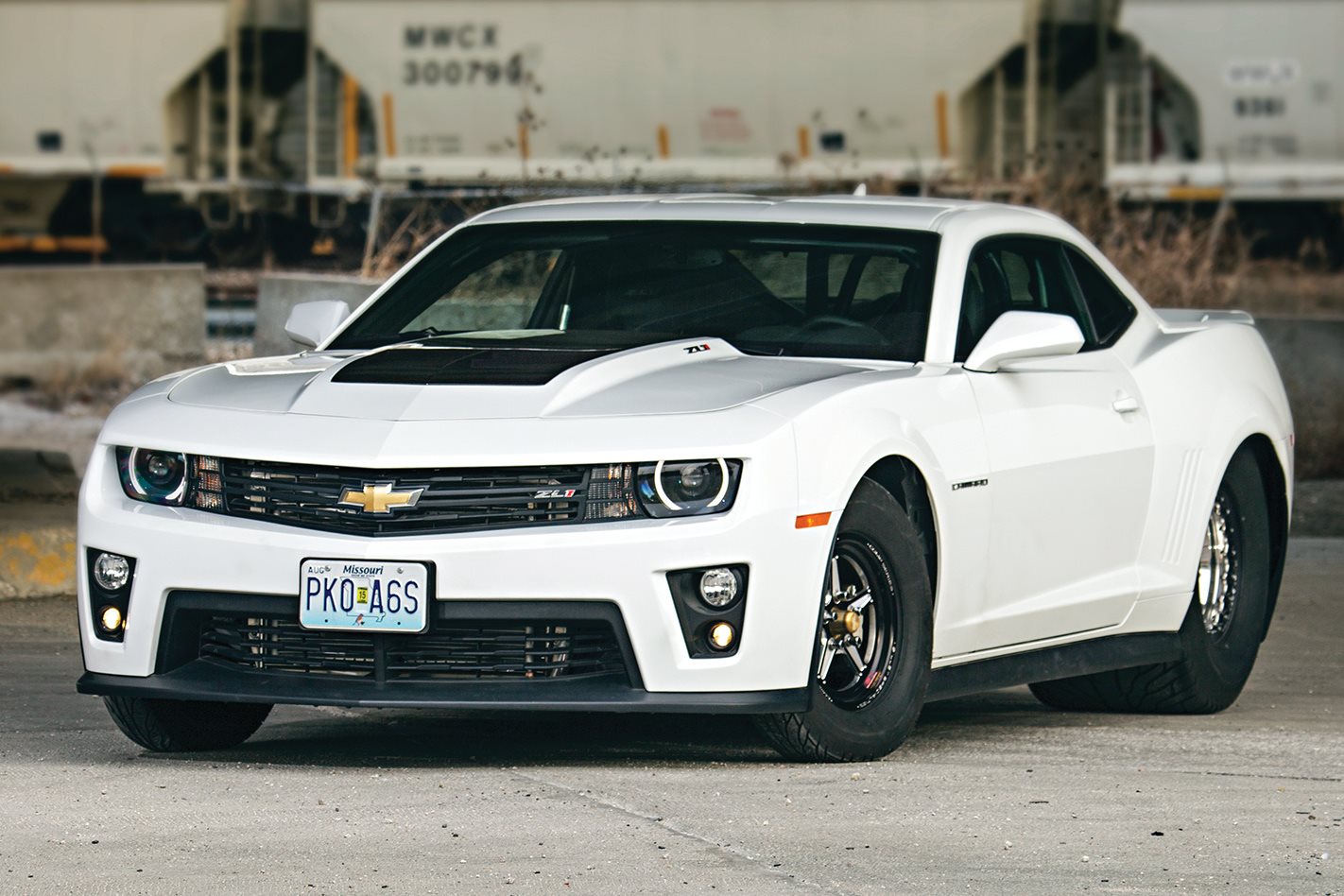 The overall appearance of Tom’s sedate-looking 2013 ZL1 Camaro belies what’s under the skin: a 2500hp twin-turbo monster capable of blitzing this Bowtie to speeds Chevrolet never intended, or imagined

Tom put more than 700 miles on the Camaro before Drag Week 2015, where they completed the five-day torture test with an average of 7.85@186mph to win the Pro Street Power Adder class. “It’s a lot of fun driving on the open highway,” Tom says. “People really notice it, especially because it doesn’t sound like a stock Camaro. Then when they see how wide the rear tyres are, they lose it.” 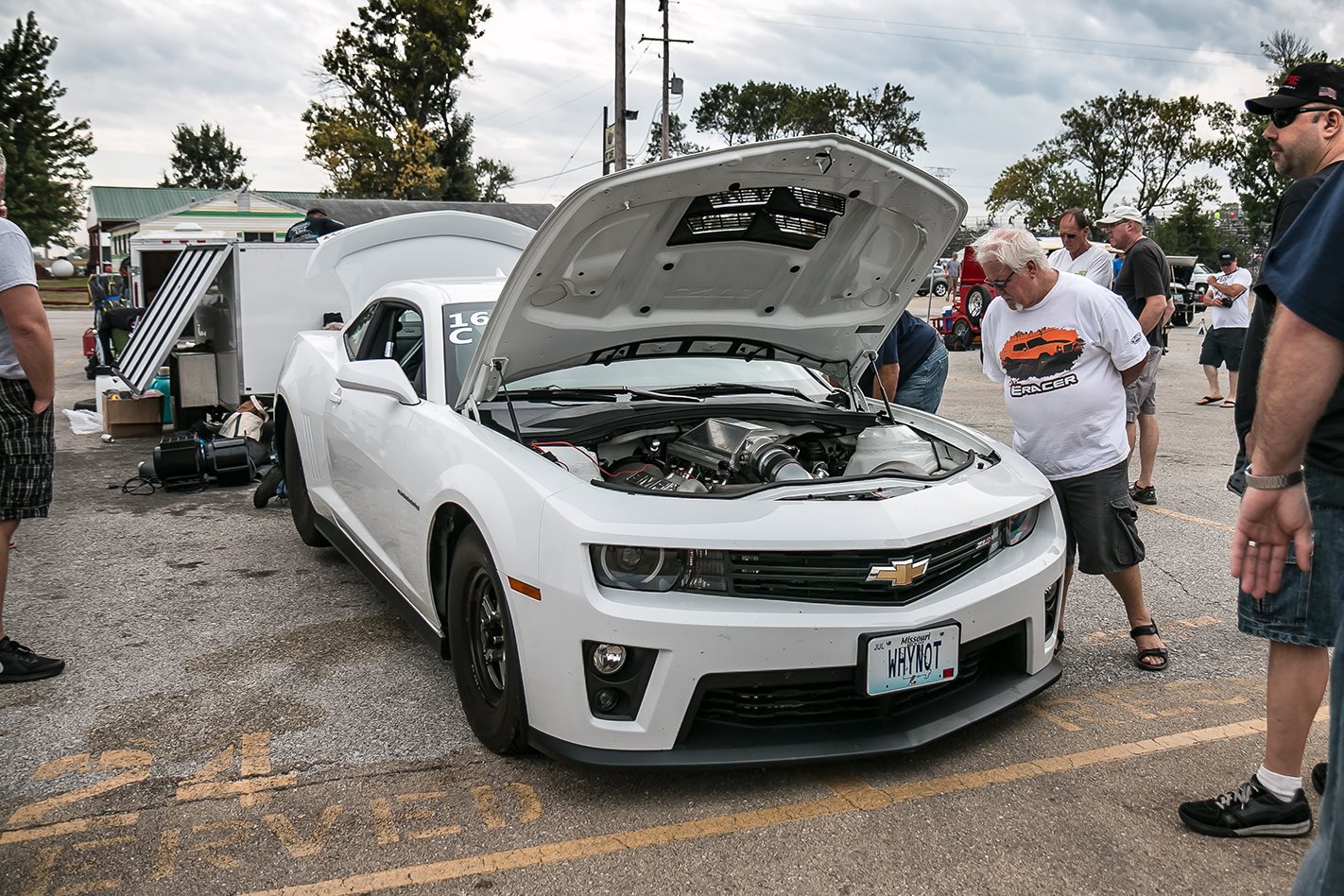 The idea behind factory race cars is to avoid what Tom has done – that is, changing a production car to better suit your racing requirements. So rather than make a race car out of a stocker, why didn’t he simply buy one of GM’s race-ready COPO Camaros? That question can be answered with his new number plate: WHYNOT? 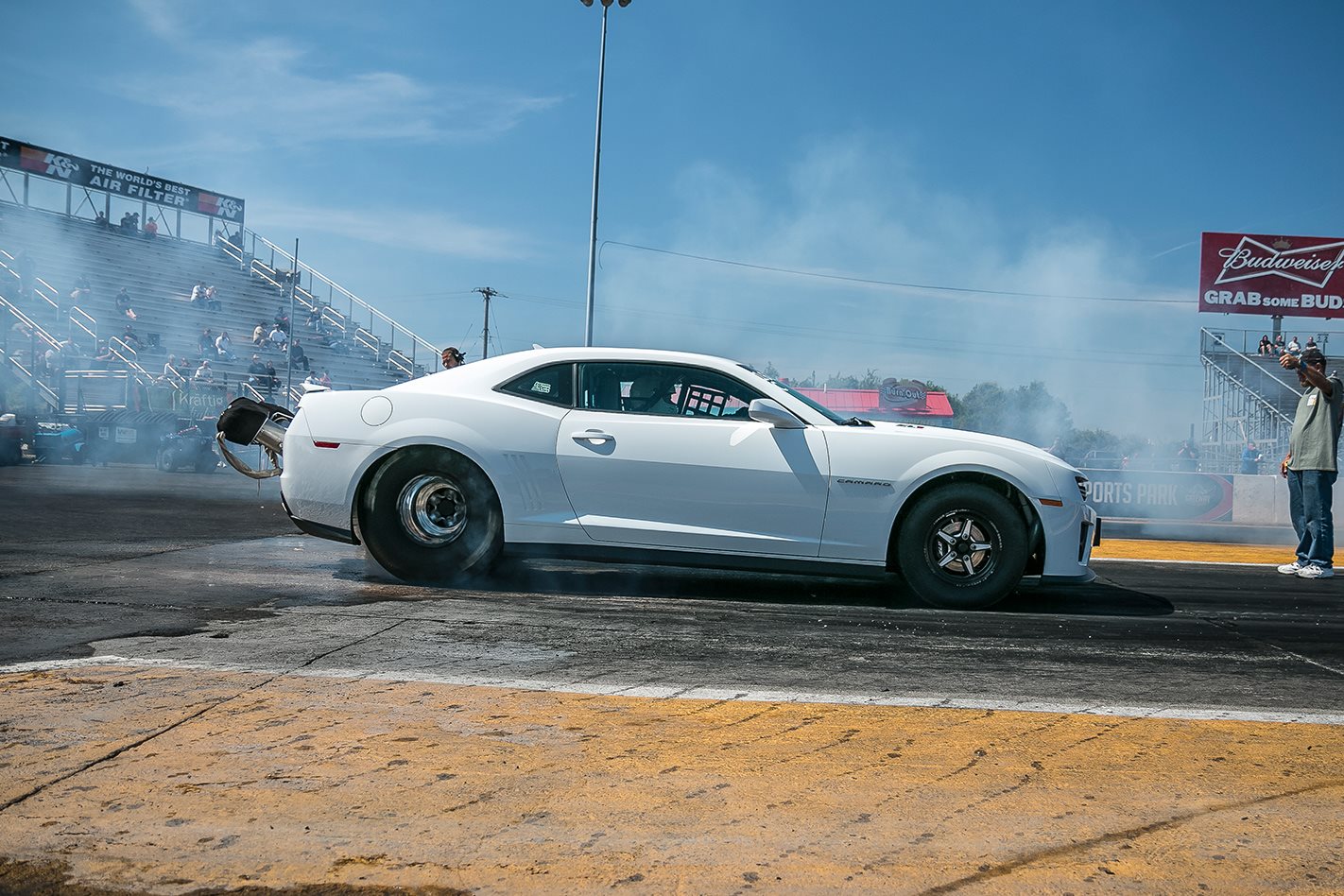 GM offers complete COPO Camaro cars as well as brand-new Camaro body shells, known as bodies-in-white. Yet we doubt whether the COPO option allows for the duality of a race car also being a comfortable cruiser – hence the insane process Tom and Larry have gone through to produce this particular stealthy ZL1 Camaro. There may be some method in the madness though; the Camaro won its class and finished Drag Week without a hitch.