TO STAND in the street and look at Shane Harkness’s sunny home on the NSW south coast, you’d never guess at the sprawling extent of the revhead Mecca lurking beneath its suburban façade.

Harko likes it that way. Even so, he can boast one of the coolest sheds going, quite literally overflowing with unique and innovative projects. When is an EK ute not an EK ute? When it’s riding on a Toyota chassis and packing big-block power! Louvred bonnet (and tailgate) were pressed by Harko’s old man. Under the cover is a factory big-block ’64 Bonneville convertible, with an oval-window Vee Dub on the far side

“I’ve tried to collect cars that I think I’ll appreciate for a long time,” he says. “I started out playing with early Holdens and moved on to American coupes, but I’ve always loved customising.”

A bloke with such a wild interest in modifying metal needs plenty of space to get creative and Harko’s House of Kool is expansive. Fronted by a full-length carport, you don’t even need to crack open the roller door to suss out a couple of his wicked works in progress. The first, a cool-as-a-cucumber custom, is a two-door pillarless EK Holden with a chopped top, baby Moons and whitewalls. 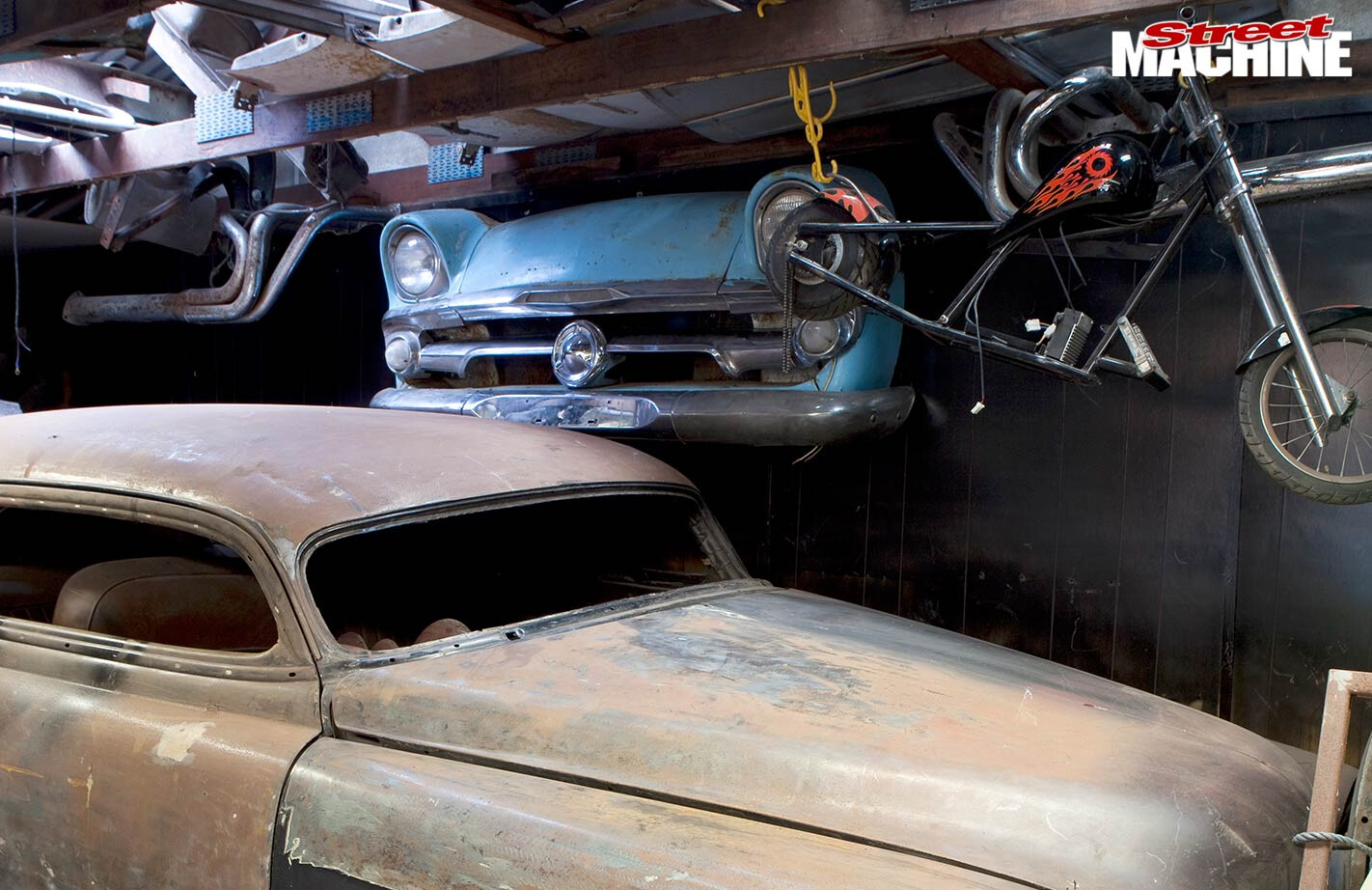 A little puzzled by the front cut on the wall? “It’s an EK with a Customline grille. My wife’s brother was my best mate. He once sketched a Cusso grille into my chopped ute, so I bought one and ran it in my ute for a few years. He’s since passed away, so having it up there really means something to me”

“I’ve done a lot of chops in the past. This one was mocked up in Photoshop first, to retain the rear glass and flow. I dropped the roof and moved the rear screen forward eight inches, whilst laying the screen over some. The headlight areas of the front guards were pushed out about an inch and the fins were spread by about the same, whilst the B-pillar was pulled in half an inch or so. The factory side profile is sort of plump in the middle but now it’s streamlined.

“I’ve lowered the front bumper and flowed the factory lip in the metalwork around the headlights. Any lines that were interrupted, I’ve flowed where possible. It’s pretty low and I’ve also enlarged and centred the wheel arches for clearance and appeal, so now it has a tidy yet fat stance,” he laughs. This wild custom bike was built on a slammed PeeWee 50 chassis from a jigsaw of surplus panels and pieces Harko had kicking around the shed. The bottom section is the top of an EK door inverted, while the rear is two EK fins that have been cut and shut. The ribs are splash pans from an HR, the peak running up to the headlight is a ’55 Chev guard, and the headlight is off an FC!

The matt-black chopped and flamed EK ute parked nearby is a project that was pushed to the side many years back but is now set to become the centre of attention once more. It’s built on a Toyota chassis, which means Harko can legally run a big-block and comply with power-to-weight regulations, while the body squats low over the chassis to get the desired ride height without compromising suspension travel.

“I try to think outside the square to achieve a better result,” he says.

Off to the side is a pair of cool Golden Fleece petrol bowsers that help set the scene. “It felt good to give them a lick of candy gold and pearl blue,” Harko says. “I jazzed them up the way I wanted; I like to be different and if I see that someone’s used an idea I had planned to use, then that plan gets canned.”

Harko’s pillarless EK coupe creation features a stack of unique custom mods, including a ’57 Chev boot lid and ’59 Chev dash. Under the bonnet is a Chevy V8 and five-speed stick-shift

Once indoors, you can’t help but notice the wild ’57 two-door Chev lying dormant in the centre. It was being built up as a drag car at some stage in its life and is channelled over the chassis, with aluminium tubs. Even though the doors and nosecone are ’glass, Harko assures us that it is destined for the street. The ’54 behind it is a factory two-door with a massive chop that originally came out of Tarrytown, New York. Harko picked it up from Melbourne on the weekend of the Kustom Picnic and dragged it home to add to his fleet.

Other highlights include the bar area, a great place to shoot the breeze. It began when Harko told a mate he was looking for a bar. Said mate lucked onto this one within hours and brought it ’round.

“I didn’t want to make it specifically a men’s room; I wanted it to be family-friendly so I kept the women off the walls and tracked down a skill tester and a gumball machine. But the kids couldn’t reach them on the bar, so I made a little candy bar out of an FC rear end and mounted it on the wall.

“The jukebox is an EK rear end chopped down, with fins either side of the screen, and I sourced a touchscreen DVD player that fitted the bumper perfectly. Even the tail-lights have LEDs that flash and spiral with the beat.”

Shane’s got a real knack for working with metal but we were surprised to hear that his nine-to-five sits well outside the automotive industry.

“I’ve never done anything automotive-related for a job but my old man is a seasoned hot rodder and the influence was planted young,” he says. “When I bought the EK ute, aged about 22, I couldn’t see the stocker sitting in front of me. All I could envision was ANIMAL — a wild chopped and tubbed EK ute on the scene at the time. The chop was priority number one, which meant I had to learn how to weld. From then on I started looking at cars creatively and thinking about where I could take them, rather than just accepting them for what they are. I like to muck around out here in the shed and try to streamline in all their factory blemishes, like a plastic surgeon on steel.”

Craig Lowndes samples the C8 Corvette at The Bend