LOOK closely at any square inch of Steve Bellia’s ultra-sanitary XB Falcon and you’ll quickly realise that nothing is what it seems. Everything is modified (even if only subtly), re-engineered or fabricated from scratch to be smoother, slicker and a whole lot neater. 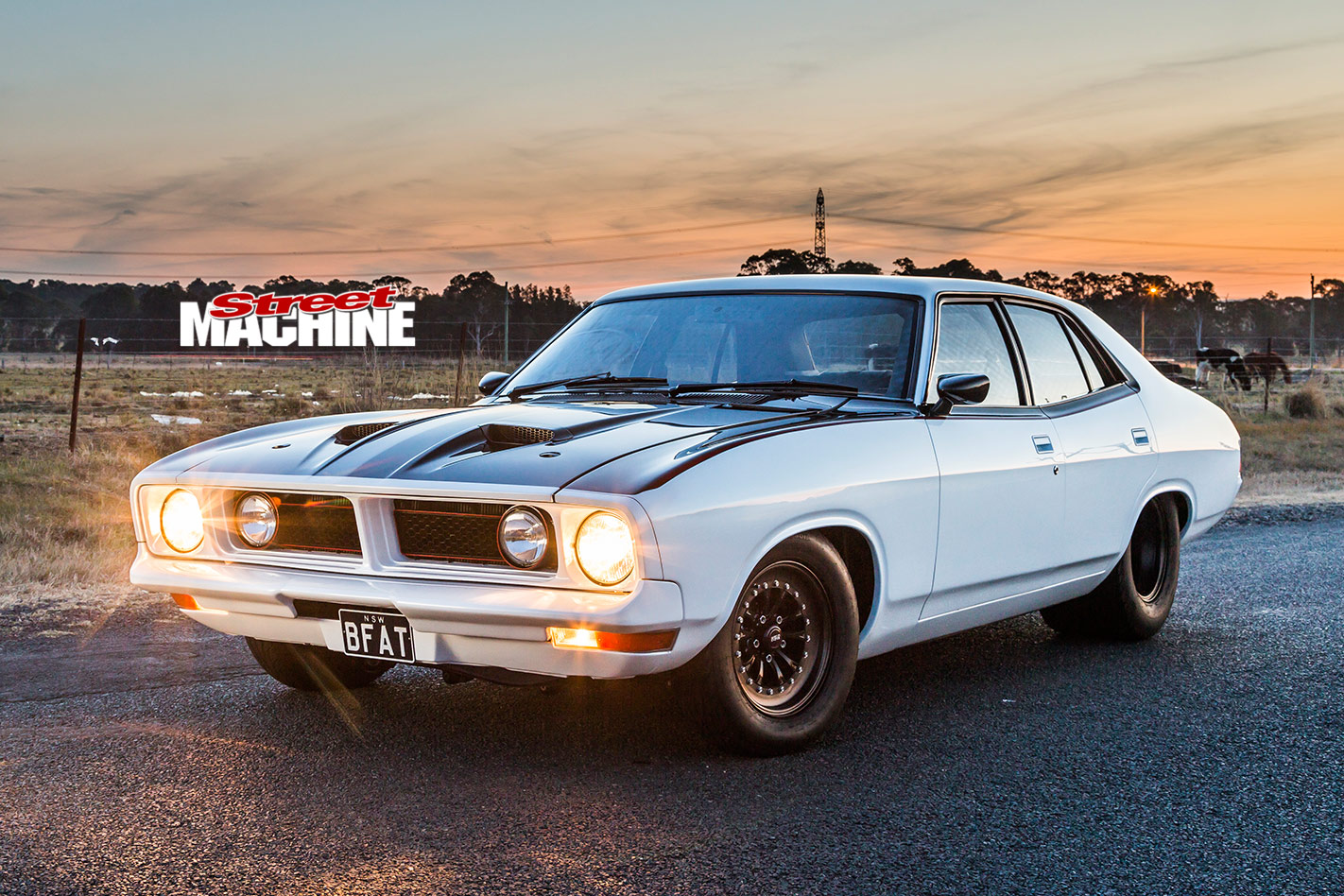 “Nothing’s off the shelf on this car,” says proud builder Steve. “Maybe the bonnet hinges. Even then, I machined up new pins to neaten them up.”

Steve inherited this GS sedan off his father (read more below), and promptly set about fulfilling his long-term dream of owning a mega-tough FoMoCo streeter. 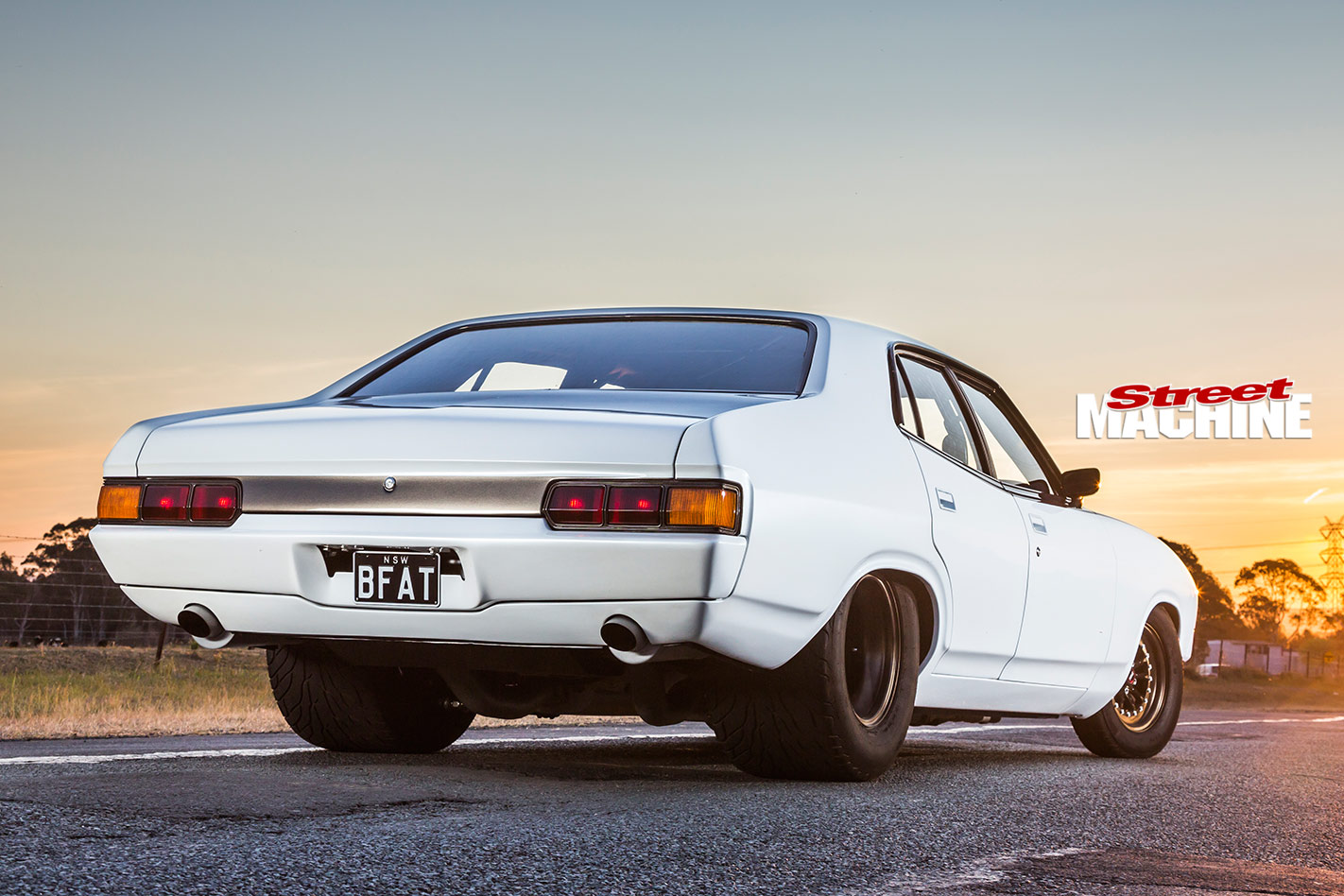 Compare this to a stock XB and you’ll note the factory finger-sized gap around the tail-lights has been eradicated. The bumper has been narrowed, shaved and sunken into the body, while the custom rear plenum snugly fits those meaty 3.5in dump pipes. And er, the rear wheelwells appear to be somewhat larger!

“It’s my brother Tony’s fault,” Steve says. “He’s got a tough XY Falcon that he’s owned for 20 years and I’ve always wanted one of my own – I just never intended to go this far.” 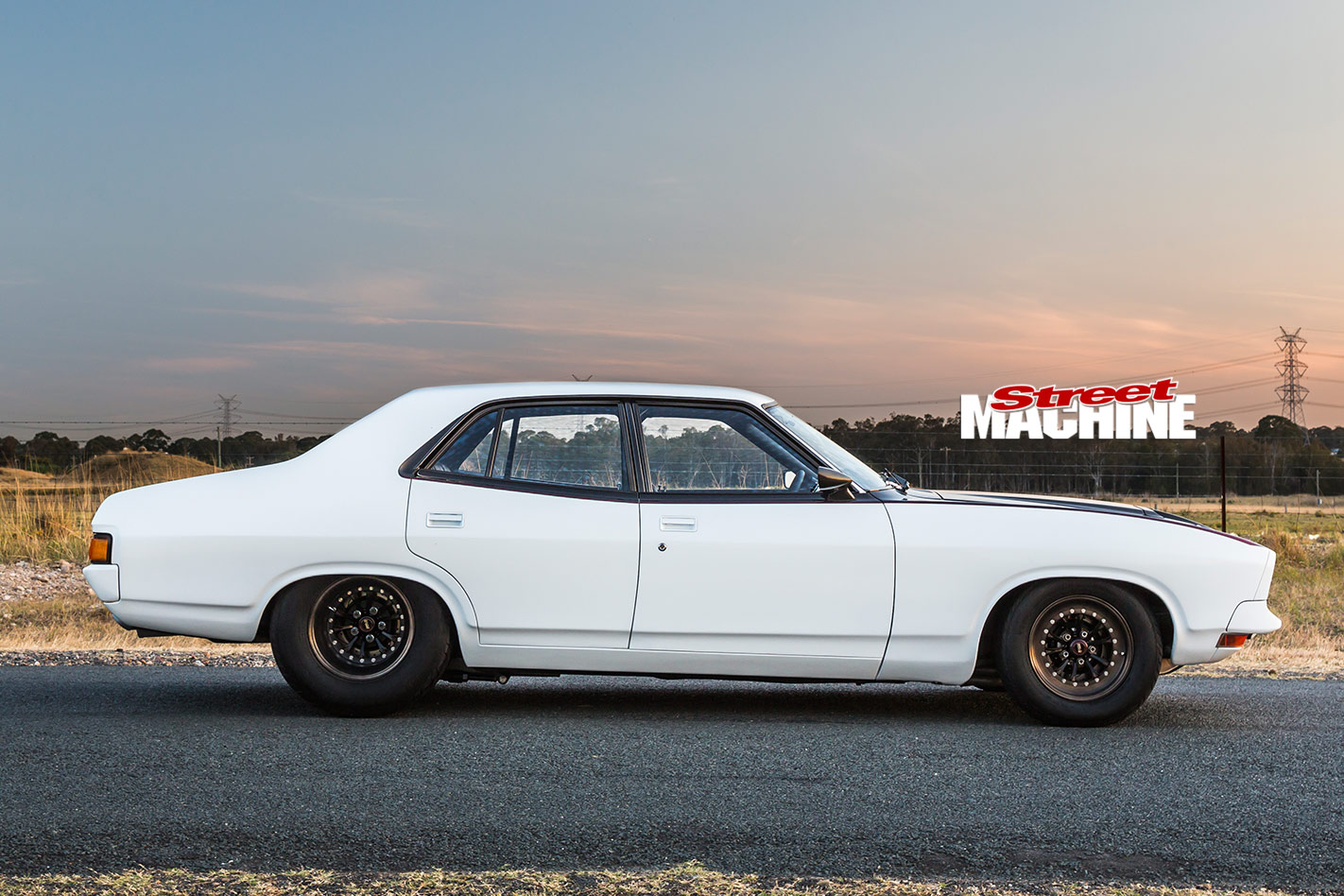 The body is now smoother, slicker and tighter than the factory ever dreamed of.“They were never built as a show car,” Steve says. “To make one into a show car, you have to spend a lot of time and money”

Steve began with the understanding that a tough car needs a tough engine. So with a near-new 351 Clevo block in tow, he headed off to chat with Chris from Gibson Race Engines. Chris’s advice? If you want bulk, reliable power, ditch the factory block. Go with a Dart and lots of cubes – 434 to be precise! 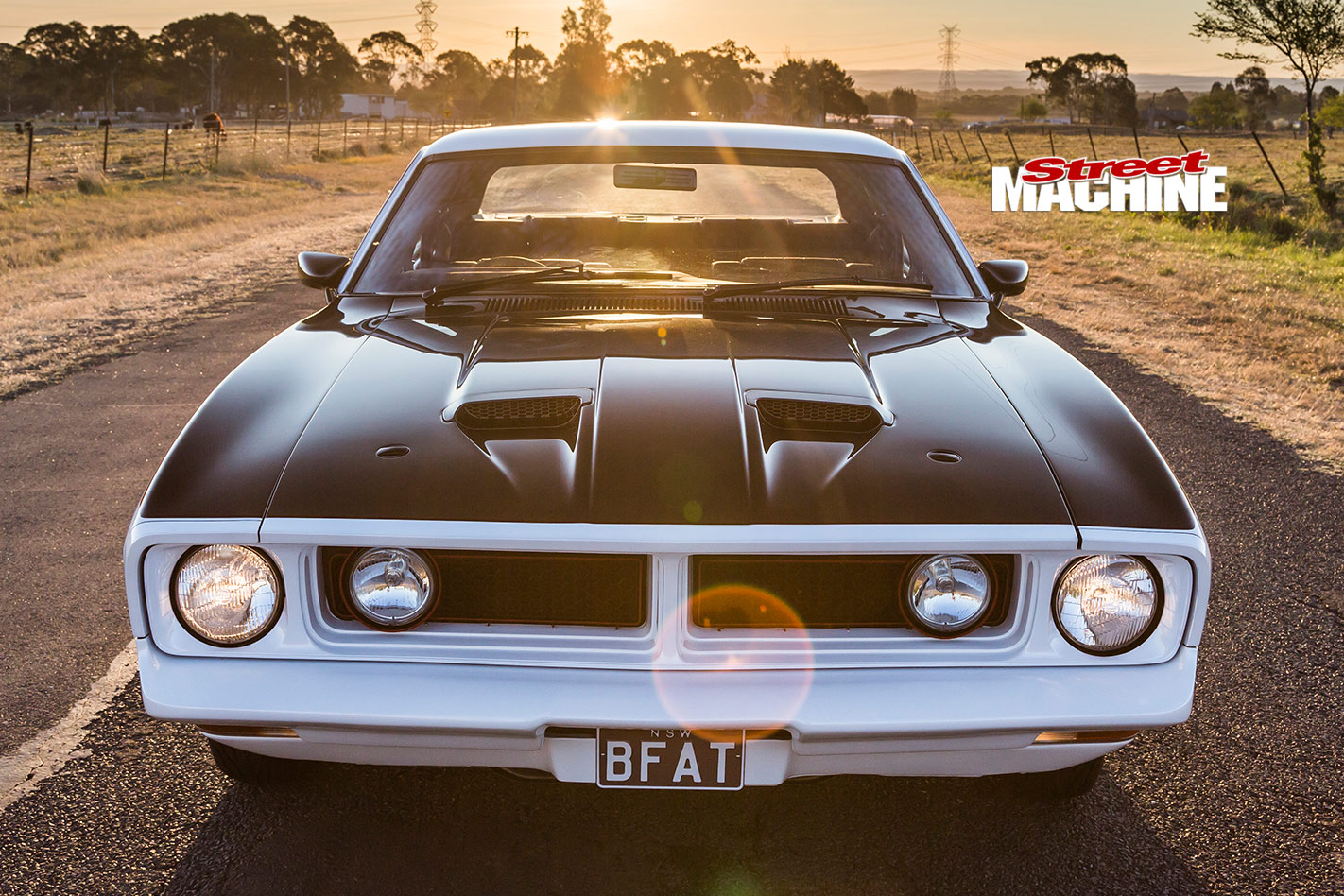 The very slick grille is a full custom fibreglass piece by IM Composite Technologies. And before all you XB owners think about putting your hand up for one – it won’t fit! This custom one-off was designed to fit into BFAT’s massaged front opening and uses different mounts to tie into the smoothed-off headlight buckets – which now mount in from underneath

“Chris had built a killer 355 stroker for a mate of mine, Russ,” Steve says. “I trusted him, so pretty much let him do whatever he wanted. He was awesome.” 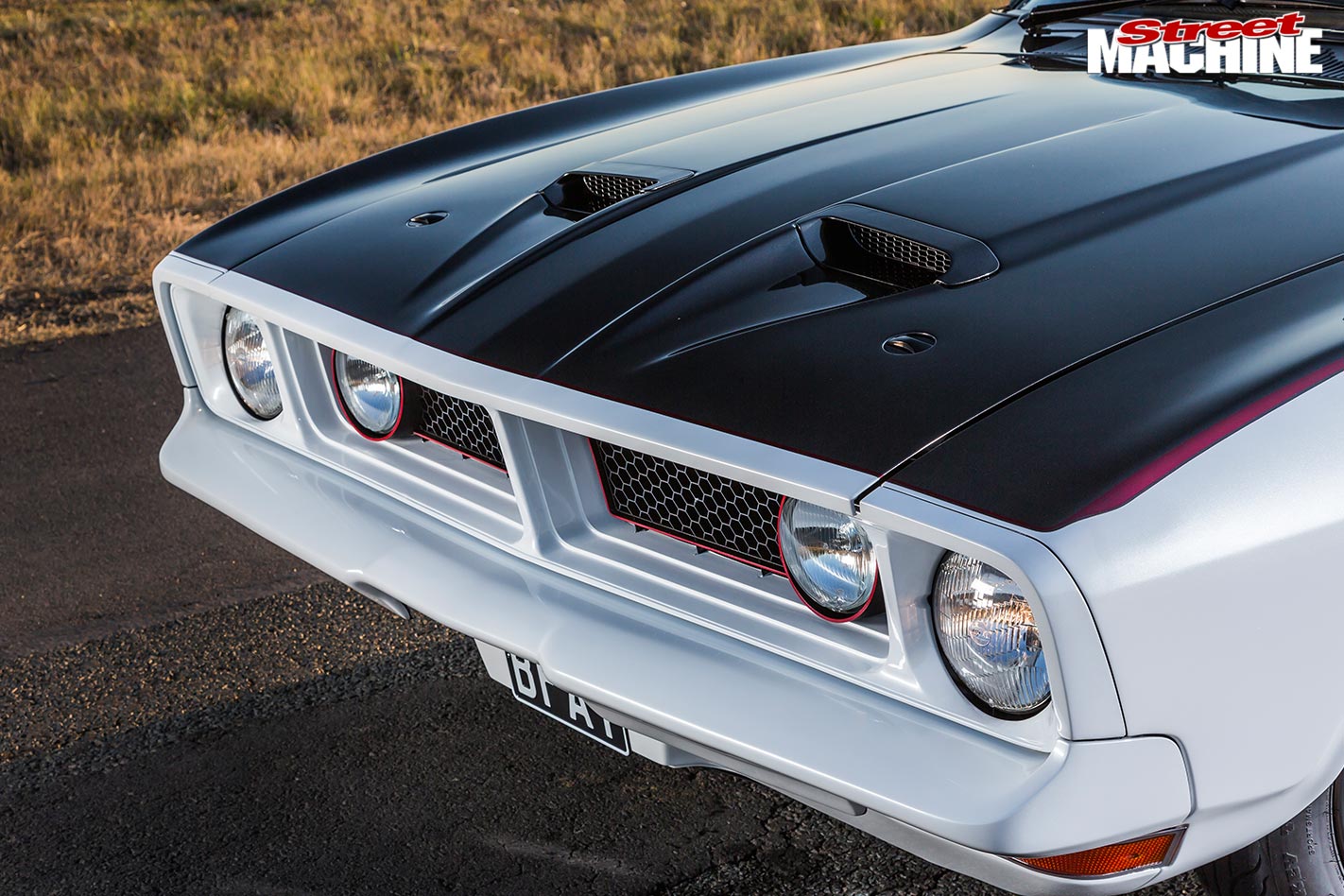 The parts list is all absolutely top-shelf, including deep-breathing CHI 3V heads, tall single-plane manifold and 1050 Holley Dominator. On the dyno, Steve’s faith in Chris was rewarded with a big-cube small-block good for a very stout 754 horses.

“The engine was the first thing I organised, but the last thing finished,” Steve says. “We didn’t want the assembled engine sitting around for years. Chris loaned me a dummy block, cylinder heads and inlet, and we literally build the car around the engine.” 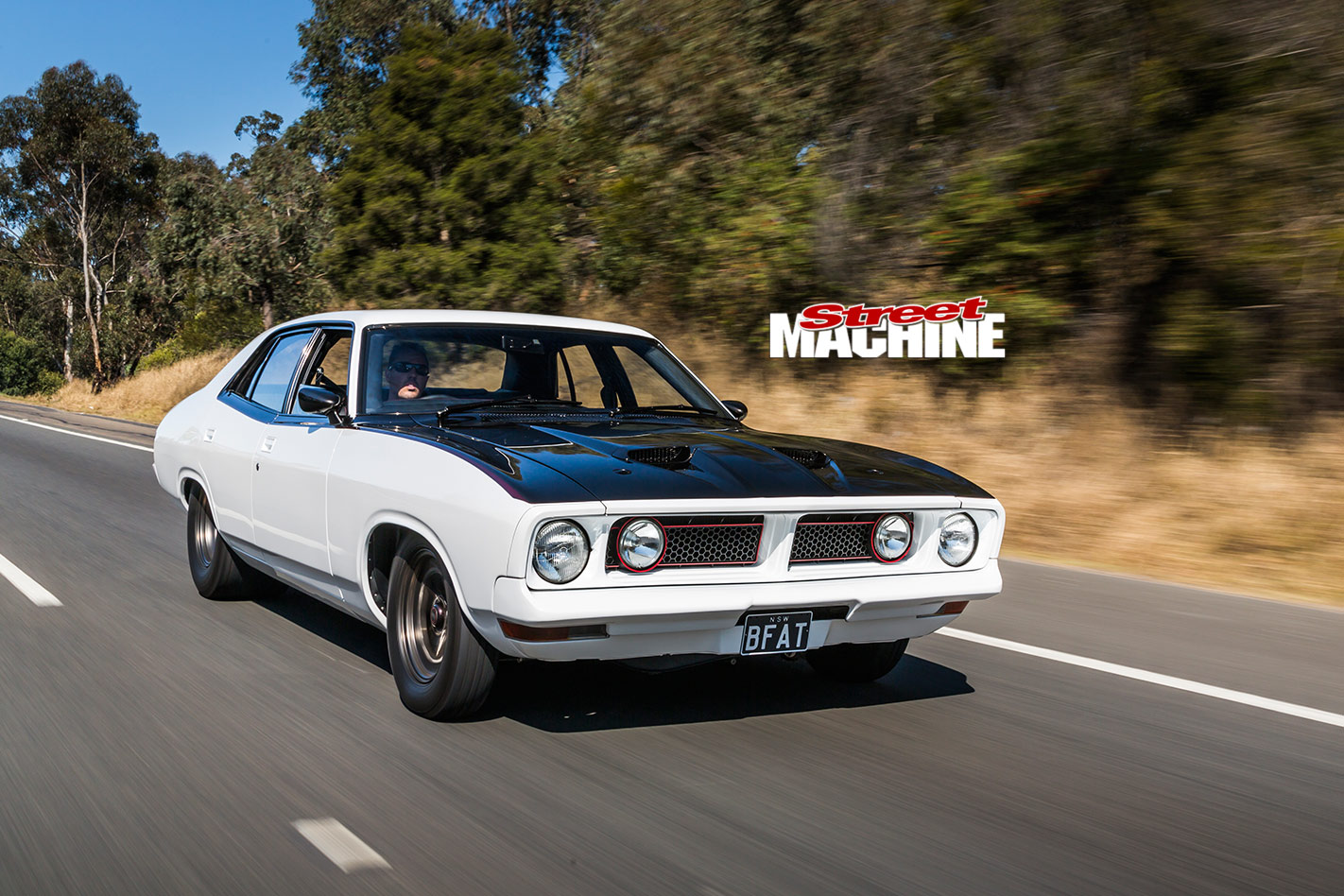 Being a fitter and turner by trade – and a dab hand at fabrication – Steve’s responsible for a host of BFAT’s unique pieces. So too was James from Groove Ryder Fabrications, and they spent countless hours between them re-engineering the all-Aussie Falcon to handle the prodigious power. The rear leaves were relocated inboard and outfitted with modified CalTracs, and the repositioned springs and mini-tubs (complete with factory-looking swage lines) dictated a custom fuel tank, which was baffled to eliminate fuel slosh. 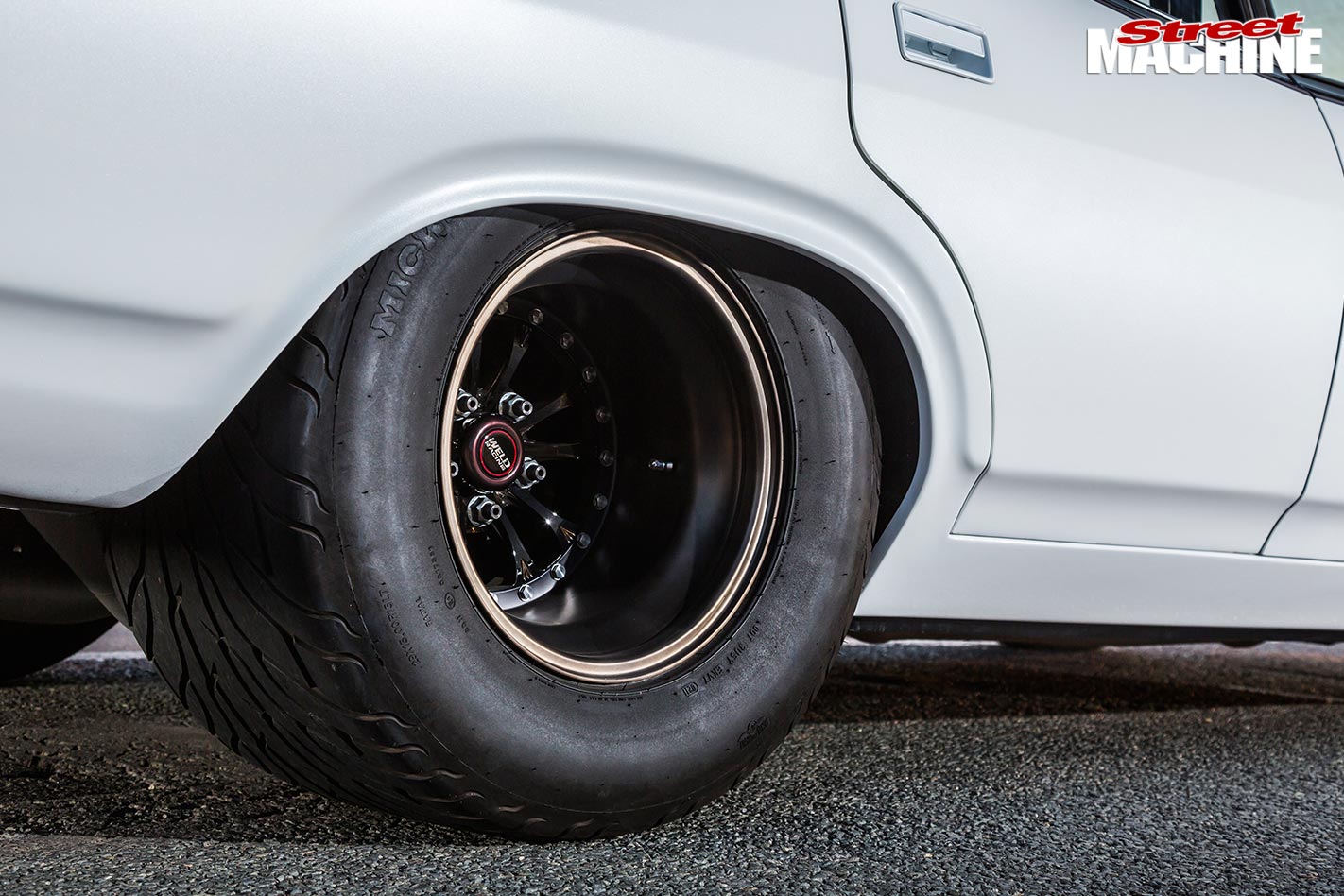 The rest of the driveline is every bit as tough as the donk. Al’s Race Glides came to the party with one of its bulletproof, full-manual reverse-pattern C4s. It’s followed by a massive chrome-moly tailshaft by Strange, which feeds into a 35-spline Strange centre with full spool and 3.9:1 gears – all riding in a fabricated housing.

Up front, there’s a new firewall (also with factory-looking swage lines) and a larger tunnel to accommodate the significantly set back engine. Every redundant hole was also welded over and smoothed. 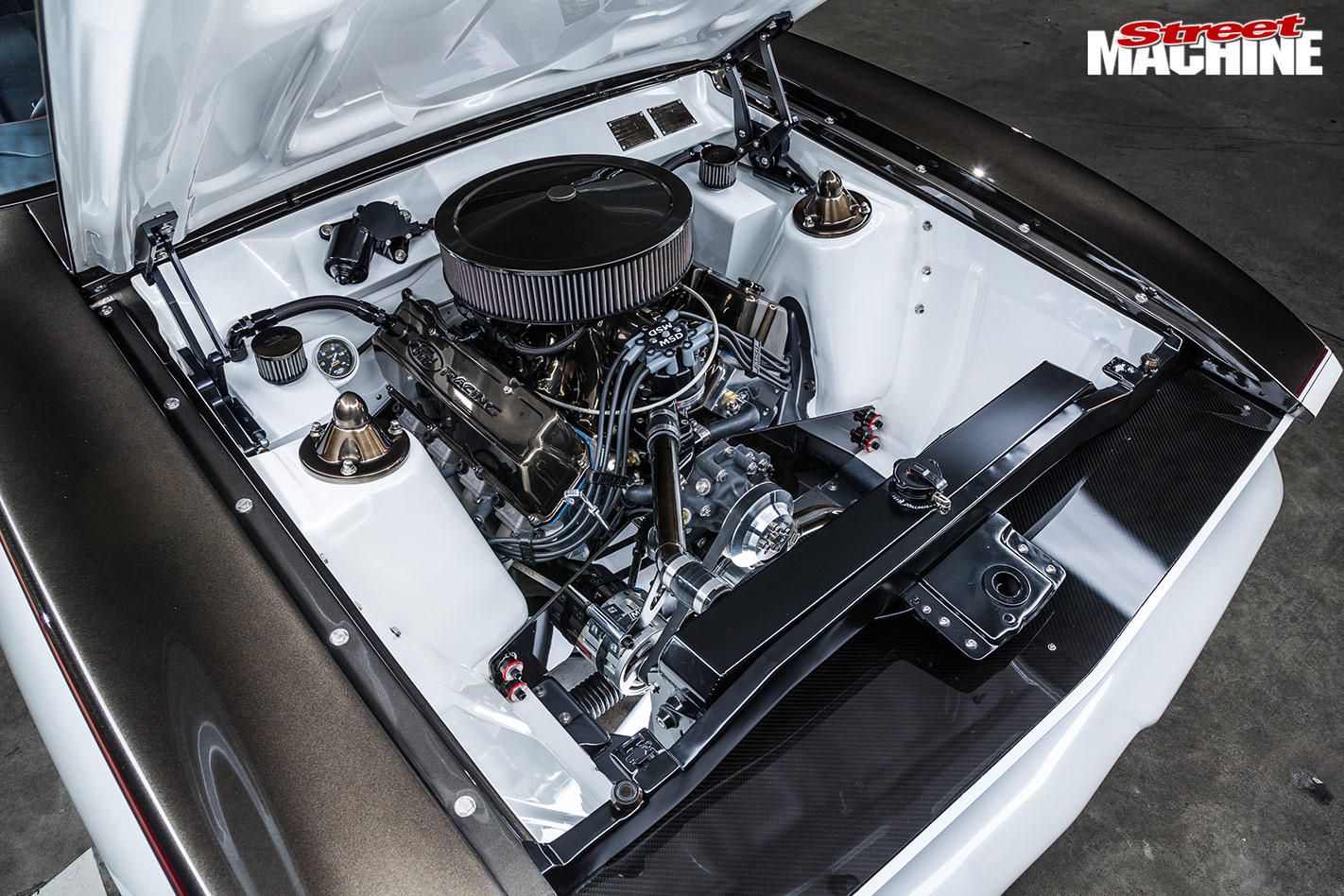 Even BFAT’s radiator overflow is super-sanitary. It runs up to what looks like a straight oil breather tank located at the driver’s side rear of the engine bay. It’s actually internally baffled to create two separate tanks – oil breather and radiator overflow. Also check out the smoothed and modified bonnet catch, slick carbonfibre cover panel, painted coolant pipes (to match the rocker covers) and machined water pump bolts 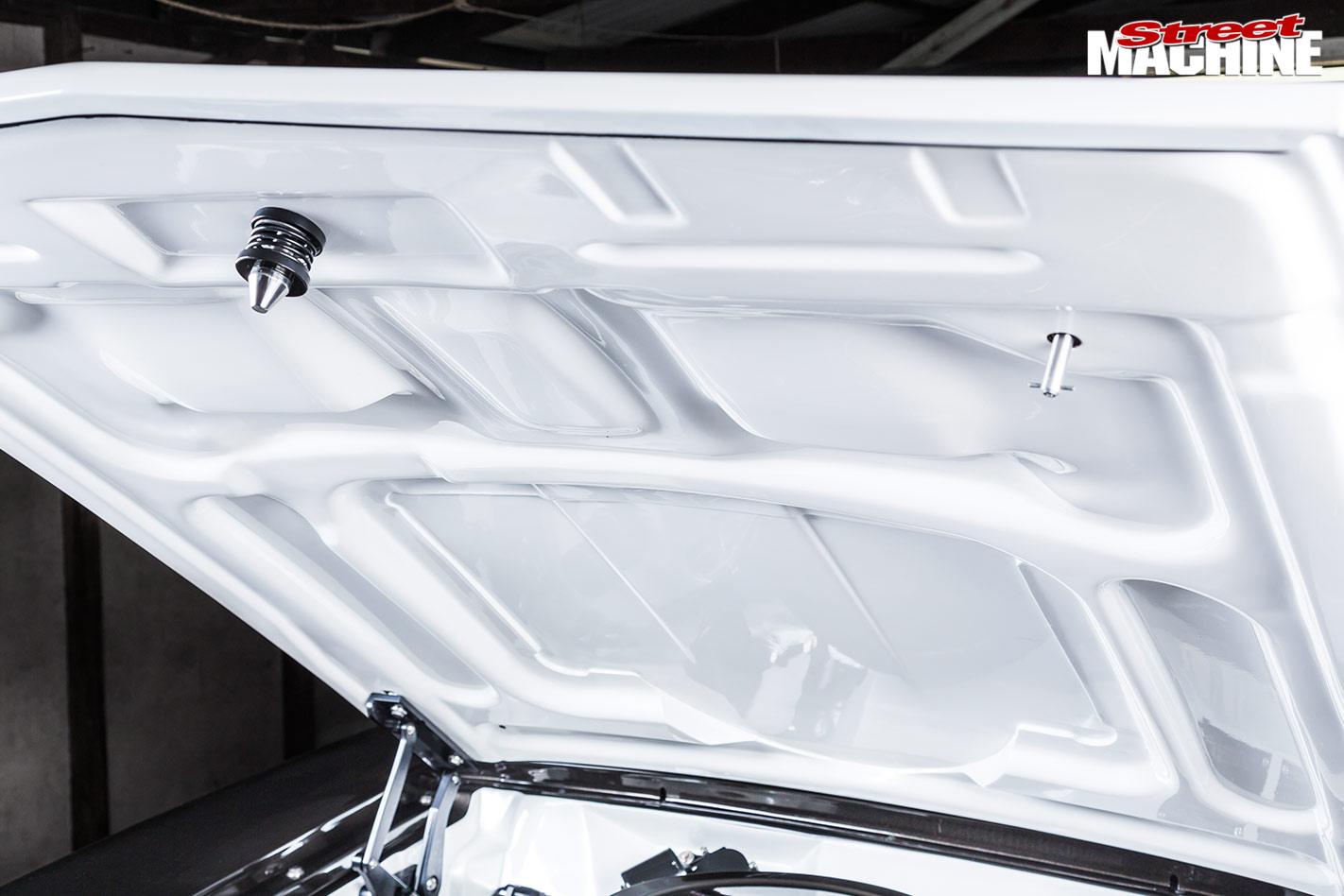 Steve and body/paint man Andy didn’t like the look of the underside of the bonnet, so they made insert panels and welded them in place, while also welding up all the unnecessary holes. It’s much smoother and cleaner now

A shortened, front-mounted LH steering rack is bolted to the new chrome-moly front crossmember, along with CRS two-inch-dropped spindles and same-brand tubular upper and lower control arms. The arms are a classic example of how much attention to detail has gone into BFAT. 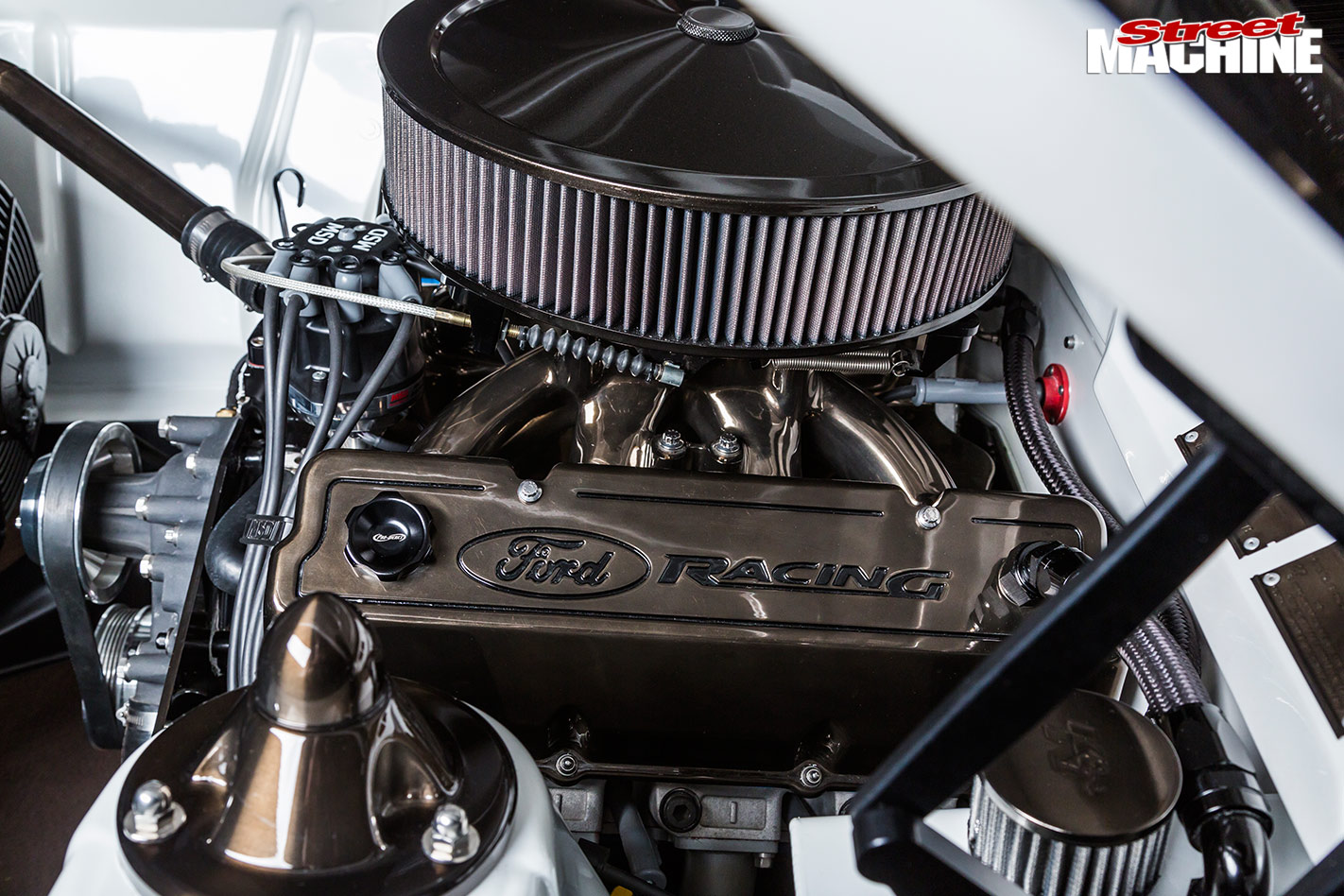 “To make them neater, I stripped the old powdercoating, dressed all the welds and had Peter Snell’s Protective Coatings re-powdercoat them in a harder-wearing satin black,” Steve says. “I sent a lot of parts to Peter for powdercoating – all the suspension parts, diff housing and loads of small parts. He even coated the headers in a special heat-resistant powdercoat, which hasn’t dulled off even after driving it several times.” 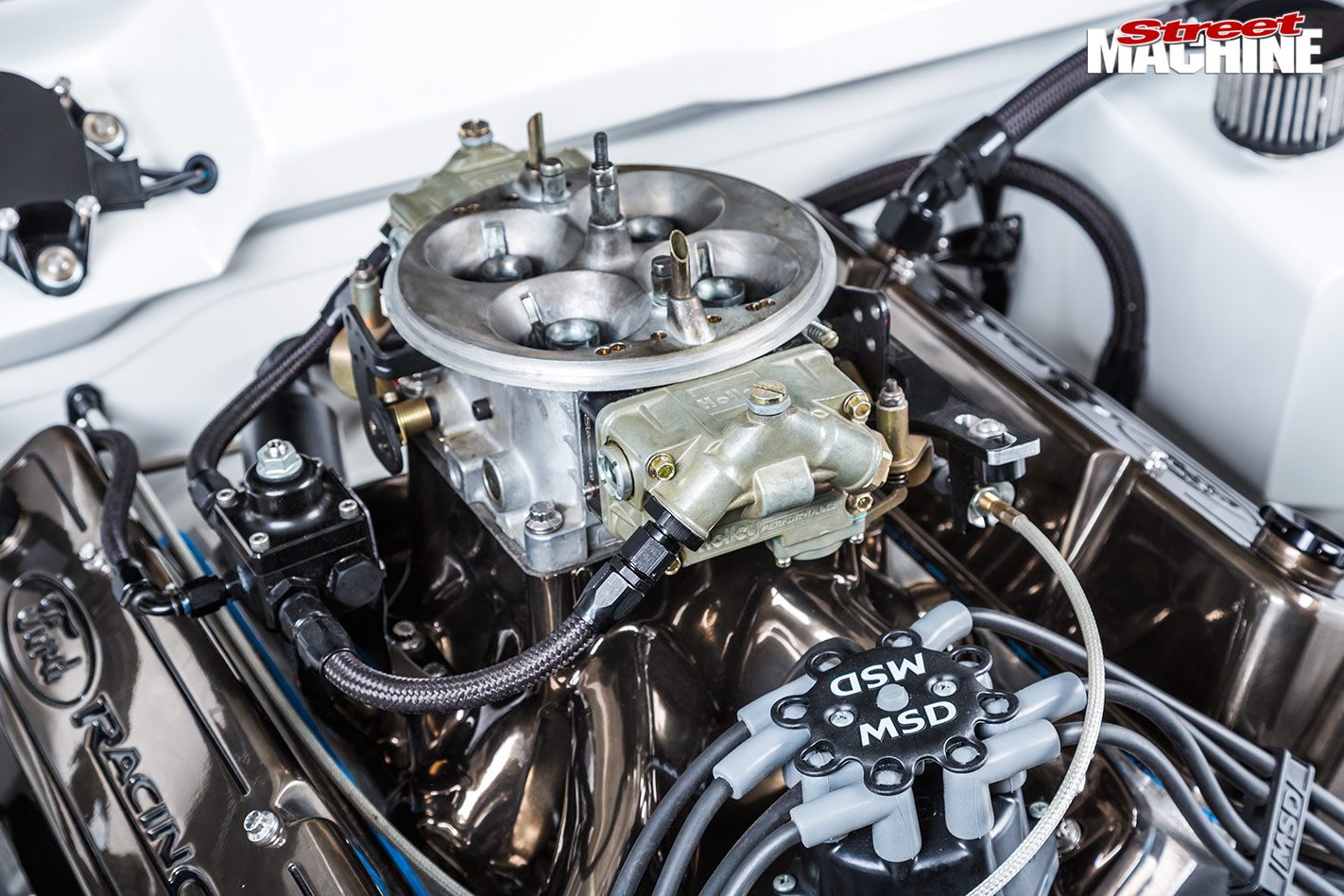 James went to town stiffening up the whole car. While on the rotisserie, beefy chassis connectors were added before the entire shell was fully seam-welded. The sills were cut open and chrome-moly tubing welded inside (which now houses the fuel and brake lines), while a full chrome-moly rollcage finishes it all off. The extensive ’cage runs behind the dash and ties into the rear engine plate as well as the chassis connectors – this GS is not only bloody fat, it’s also bloody stiff. The ’cage runs tight to the car so that it could be trimmed over to make it less conspicuous. 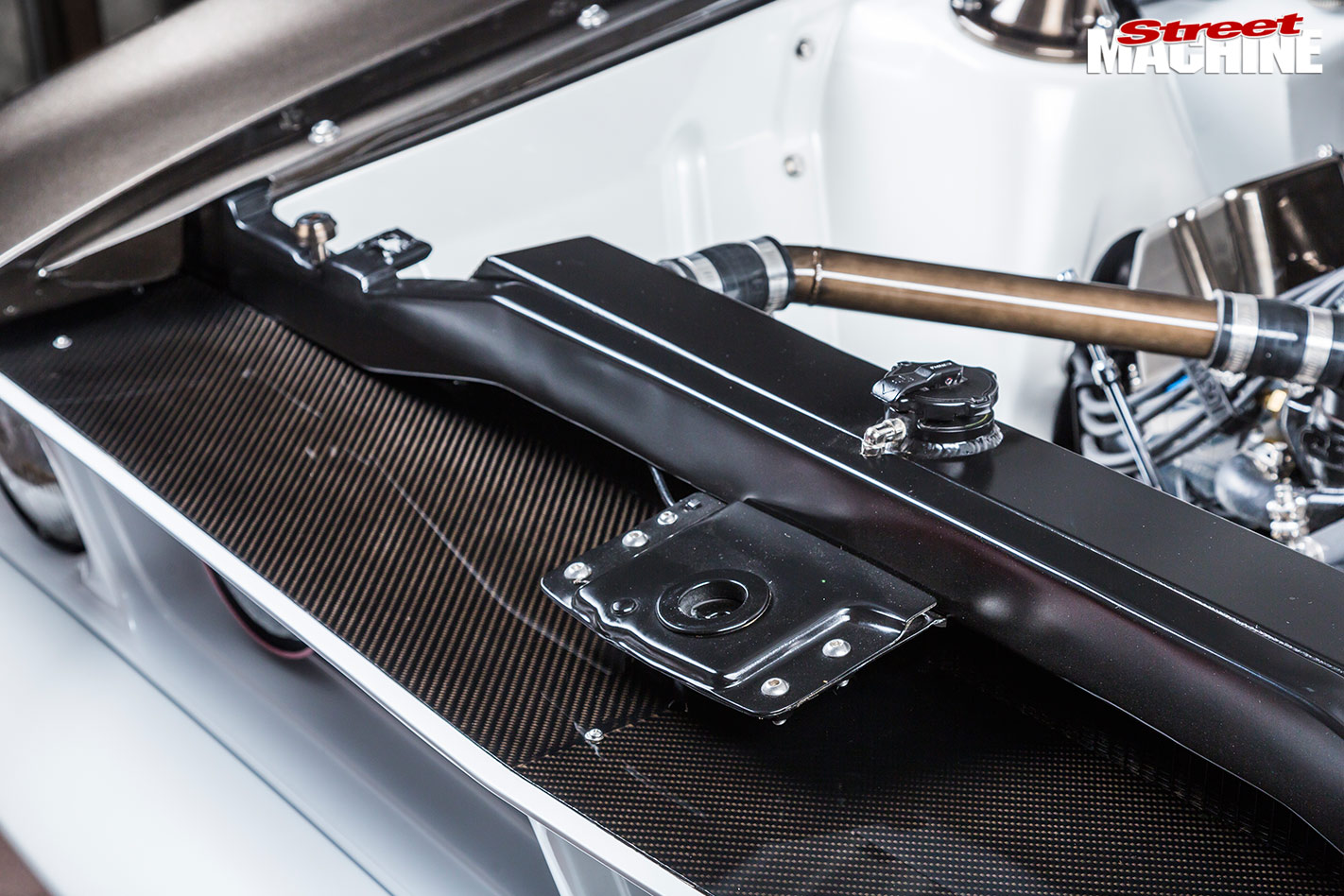 “James is a magician,” Steve enthuses. “He did so much fab work, including the headers, 3.5-inch exhaust, tailshaft loop, oil cooler mounts, radiator mounts, oil breather tanks and overflow reservoir. He also looked after all the front-end geometry, which included eliminating the factory bump steer. His work looked so good, I was determined to finish it off properly.”

The exterior was another joint project, this time in partnership with Andy and Marty from AA Panel Craft. 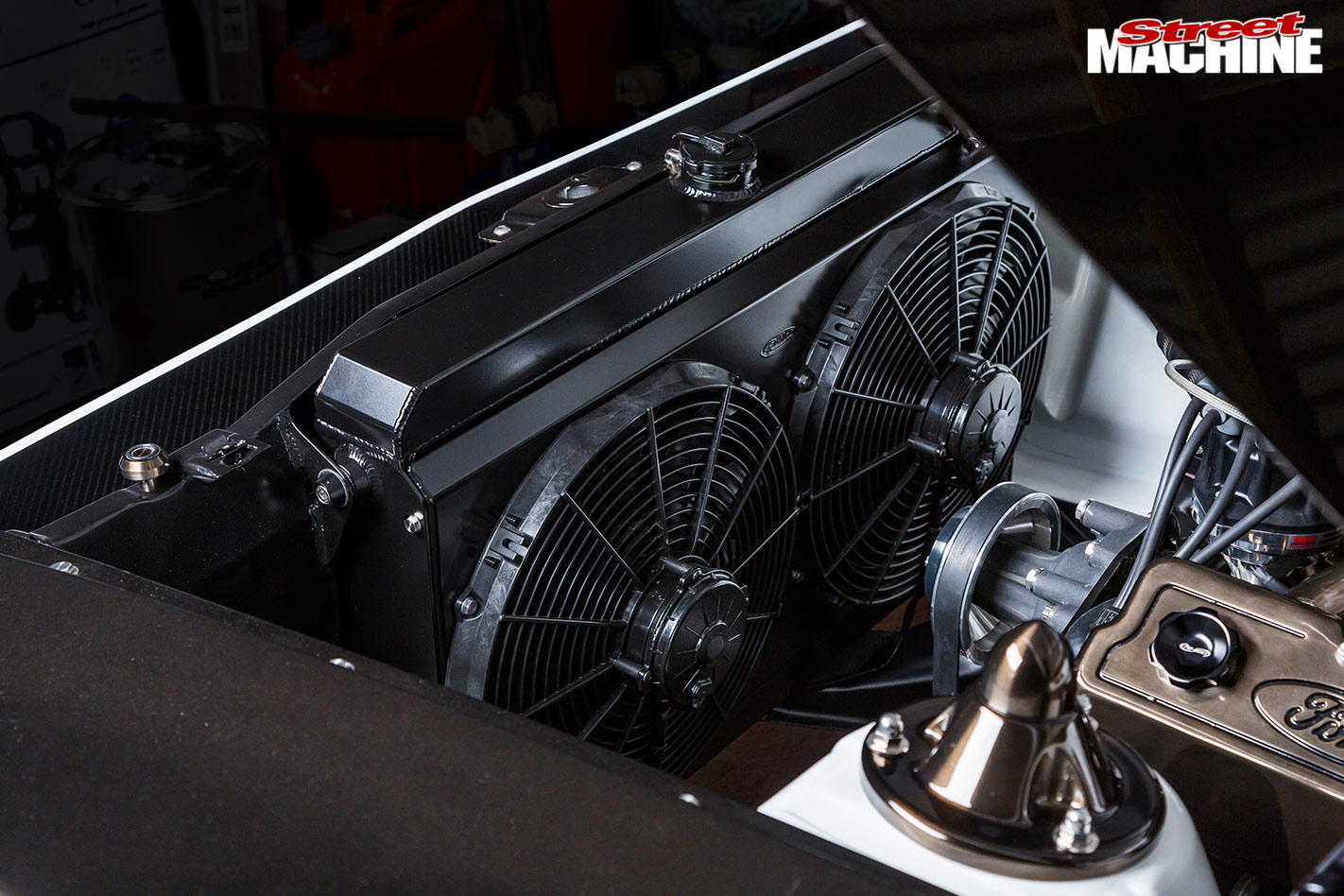 “A lot of peopled helped me with this car and it’s a credit to them,” Steve says. “However, it would never have been this good if it wasn’t for James at Groove Ryder and Andy. Andy was always there to help me, and knowing that I was trying to build the car in a double-car garage, he let me use his shop quite a bit. Both James and Andy really pushed me. Plenty of times they’d be like: ‘Come on, let’s do this!’ I can’t thank them enough.” 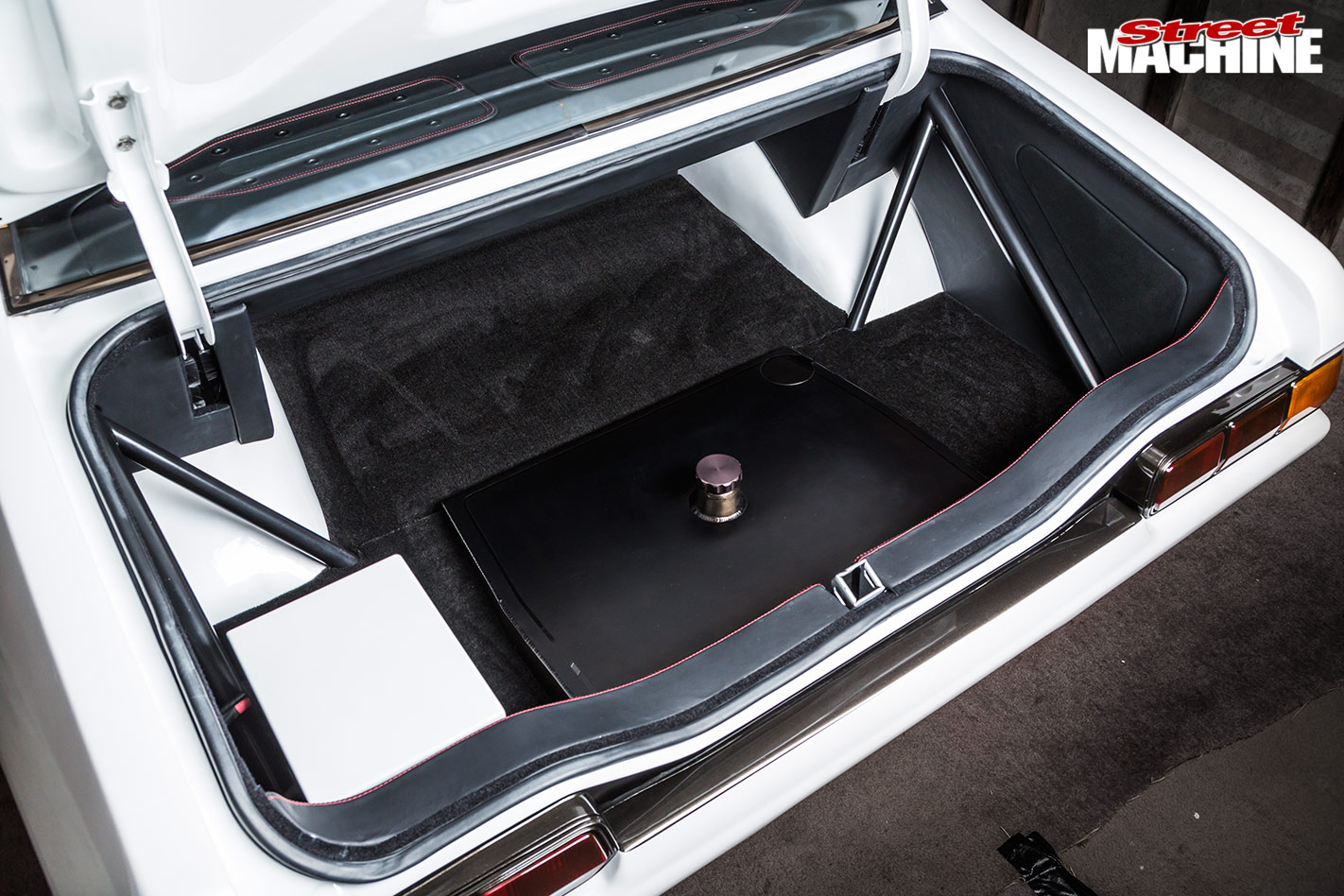 After repairing the rusted-out dog-legs, boot and sills, Steve and Andy turned their attention to the panel gaps. They were all over the shop; they’re now a snug 3mm. Many of the mounting threads for the door hinges, as well as a host of other threads, were stripped out. To repair them, Steve machined up myriad 5/16-inch bungs and TIG-welded them into place. 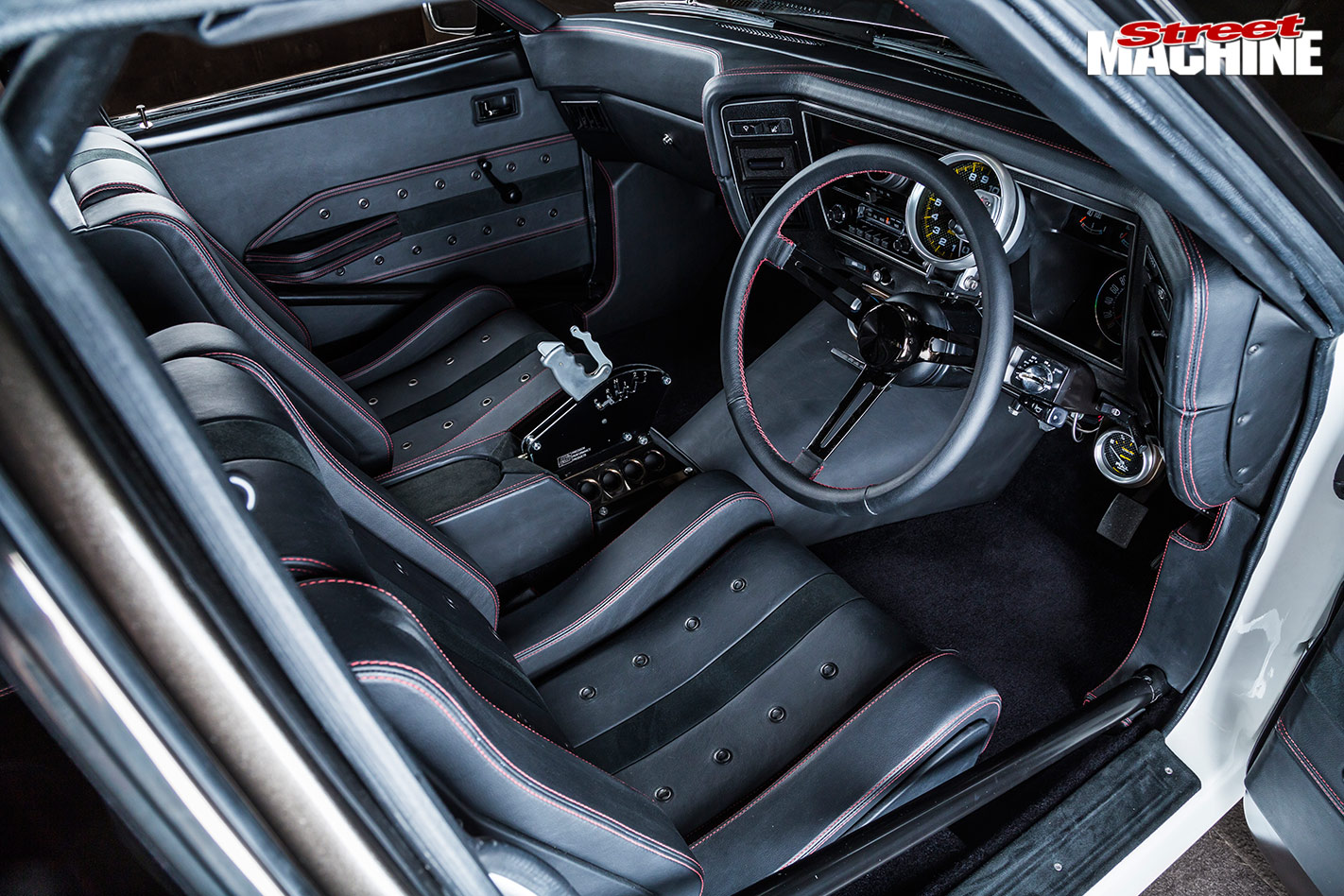 Like the rear seats, the front seats, console and door trims are all handmade one-offs. The factory XB dash was trimmed in hand-stitched leather, which also swathes the enlarged tunnel. Polaris RZR fittings in the side intrusion bars makes them removable

After cutting ’n’ shutting the rear bar and sucking it into the body, the factory gap between the tail-lights, quarter panels and boot lid was filled and smoothed. Having seen Andy rework the rear bar, Steve decided to tackle the front. 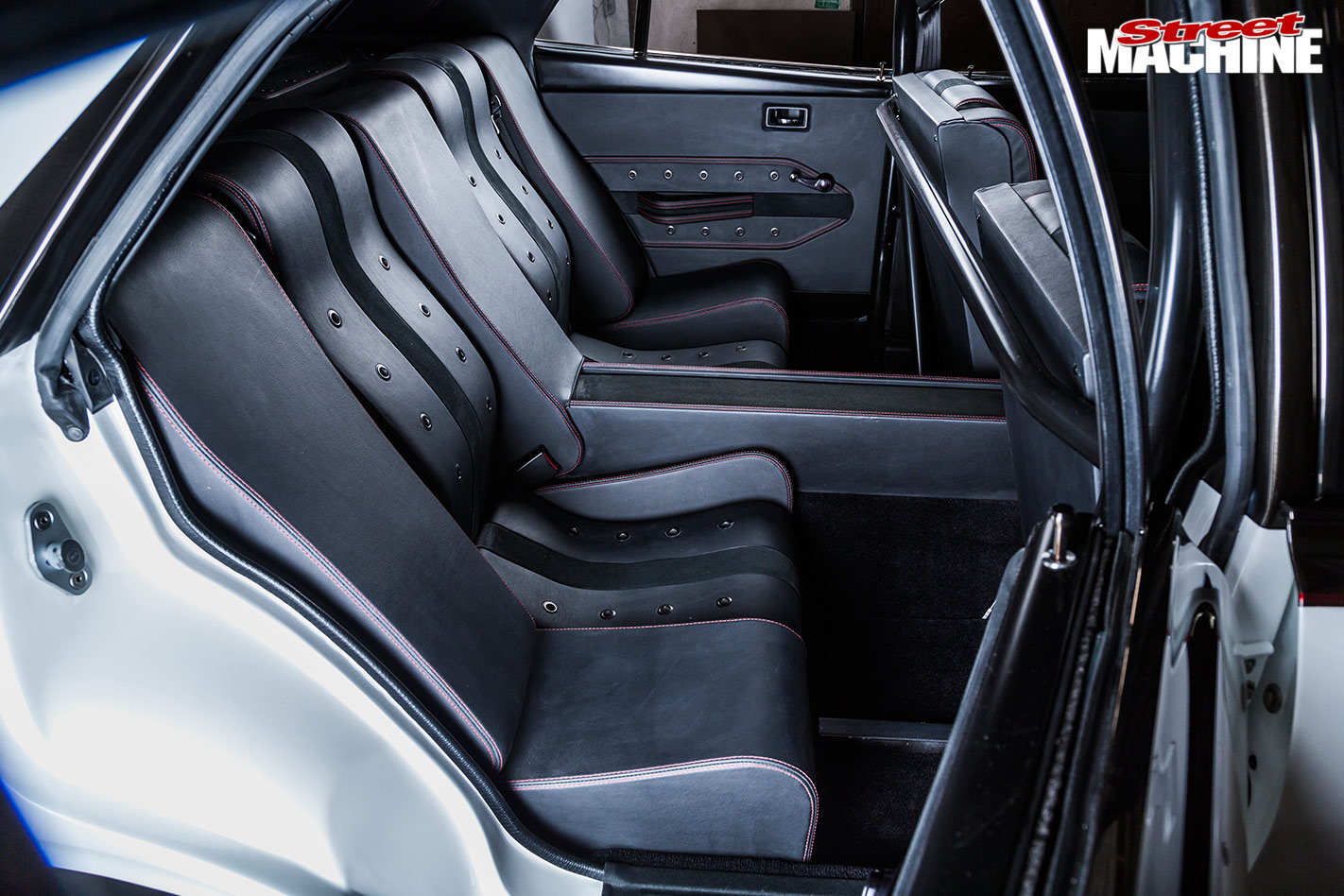 “Andy coached me through it,” he says. “I shaved all the bolt holes and I got rid of the ugly hole at the top by MIG-welding in a piece of flat bar. I put too much heat into the first one and warped it – I had to start over again with a fresh bar. All up it took me over a month to complete.”

The grille turned out to be an even bigger challenge. At considerable expense, Steve purchased two second-hand grilles and had one of them repaired. However, neither fitted right; they cracked and never followed the bonnet line. IM Composite Technologies fixed the problem by making a complete new grille out of fibreglass. 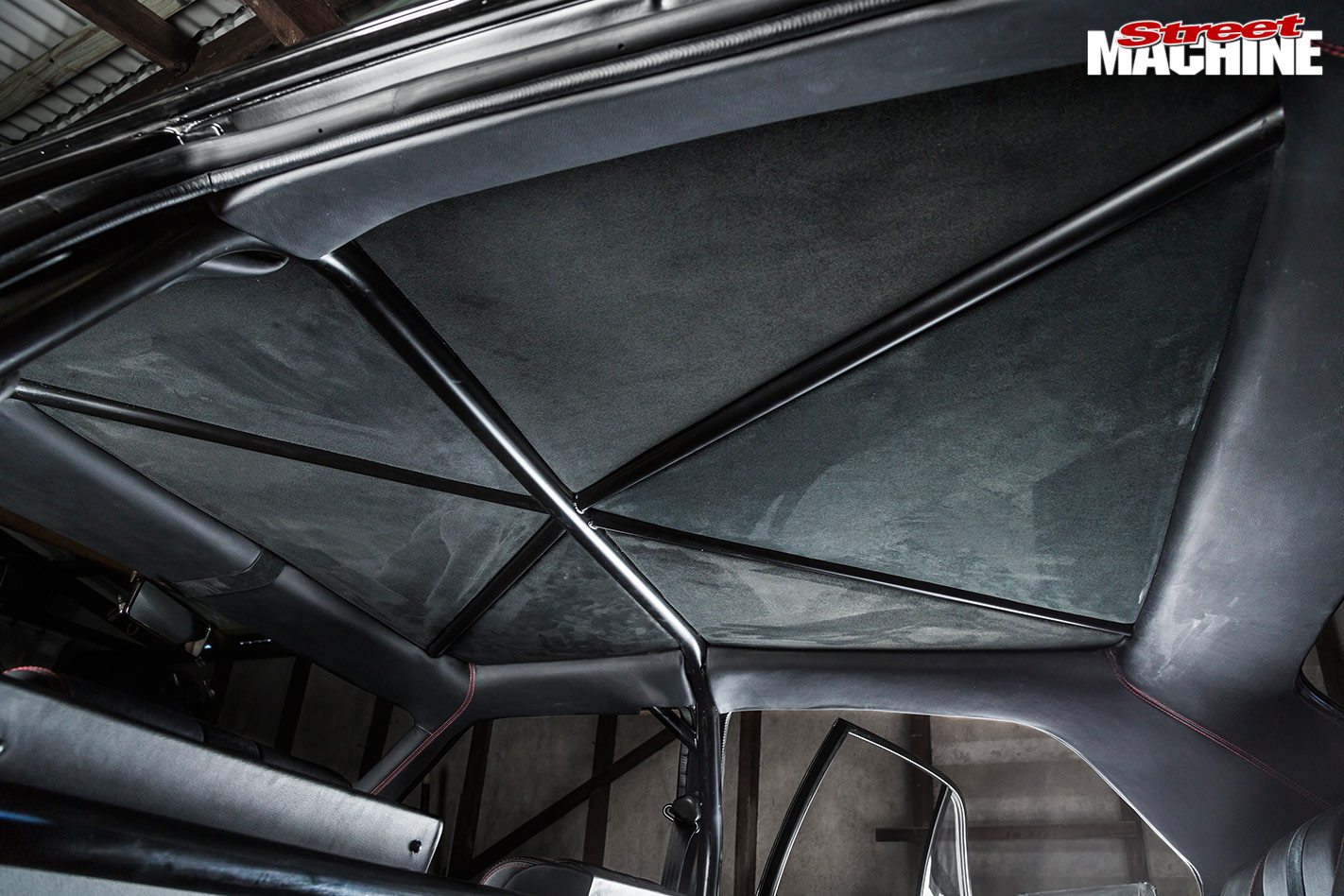 The original plan was to trim over the rollcage here in order to conceal it. Instead, trimmer Mick Carter made pie-shaped fibreglass insert panels, trimmed them in suede and press-fitted them into place. “It makes it look like a spider-web emerging through the hoodlining,” Steve reckons

After all the fab work was completed, Andy and Marty spent countless hours massaging the body before laying on the HOK pearl white with HOK Galaxy Grey accents, separated by a red pinstripe. BFAT’s body and paint is flawless! 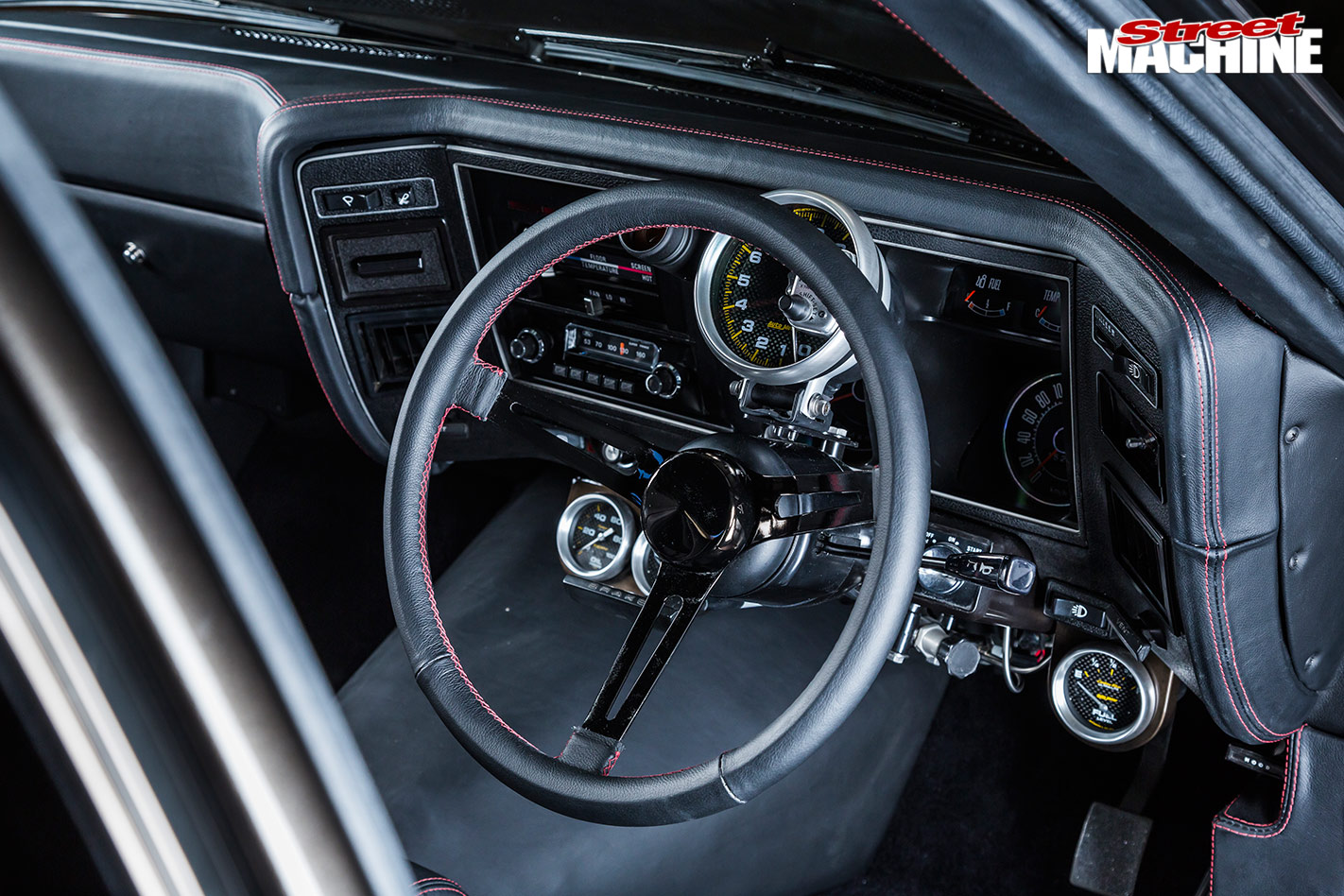 The interior continues the ‘insanely modified’ theme. Mick at Mick’s Custom Interiors really outdid himself. The front and rear seats, door trims and centre console were all made from scratch. Look down and you’ll note that BFAT has been flat-floored; look up and you’ll see what Steve calls the spider-web. Mick fashioned fibreglass panels for the surrounding section (all trimmed in leather) and filled the rest in with six individual panels. About the only Ford bit left in the interior is the XB dash – that’s because Steve loves their shape.

“The trim colour actually determined the exterior colour,” he says. “When it came time to settle on body colour, Andy and I looked at some of Mick’s completed work and we both agreed that white would be the perfect contrast.” 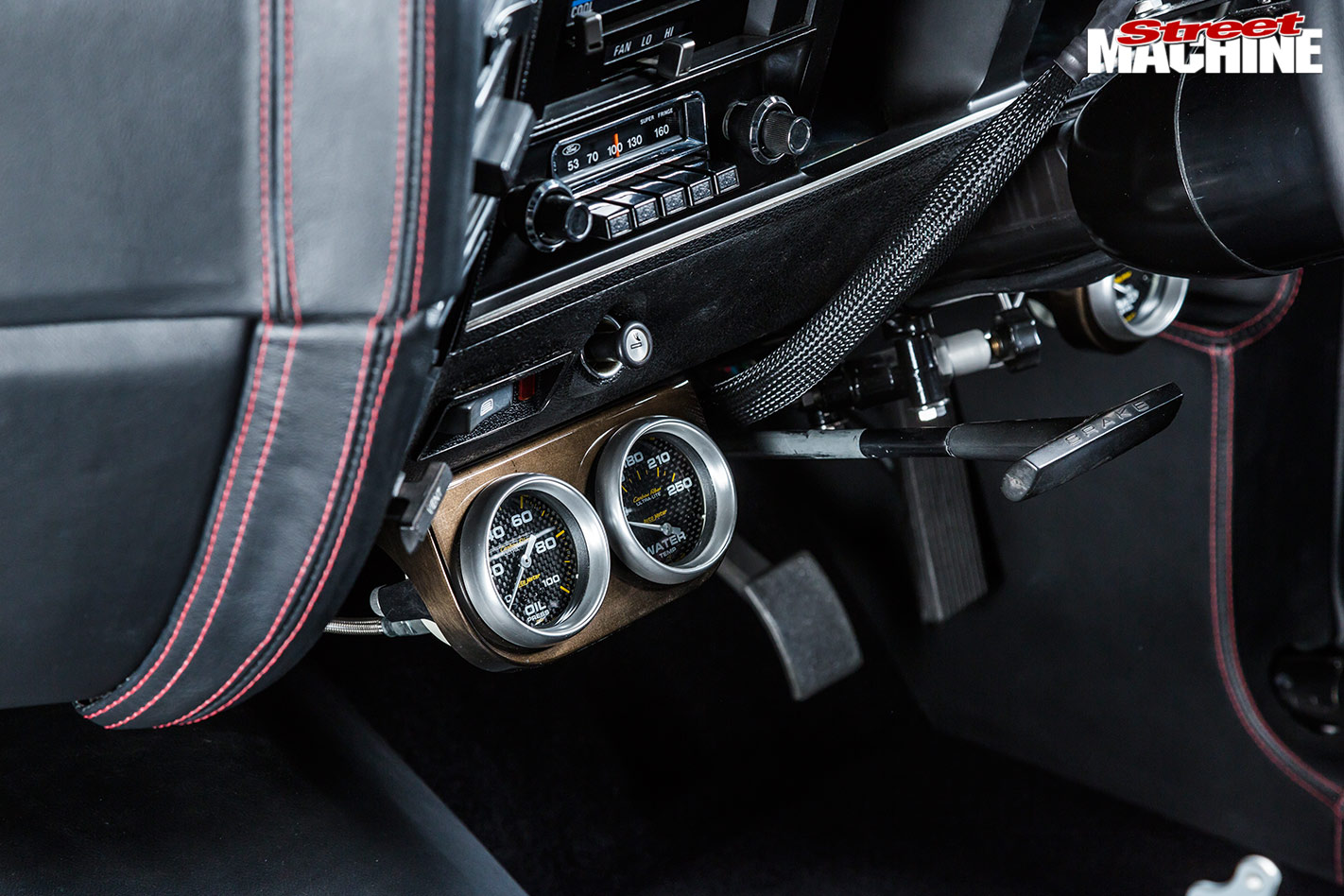 Although the car had been together at least seven times, it was never fired up until after it was painted, Daniel (Gizmo’s Auto Electrics) had finished the wiring and all the Earl’s fittings (thanks to Jack) were plumbed. “It was pretty nerve-wracking,” says Steve of the first turn of the key. “But as soon as the engine fired, it was smiles all ’round. Everything was all good, and it was immediately obvious the engine was plenty tough. 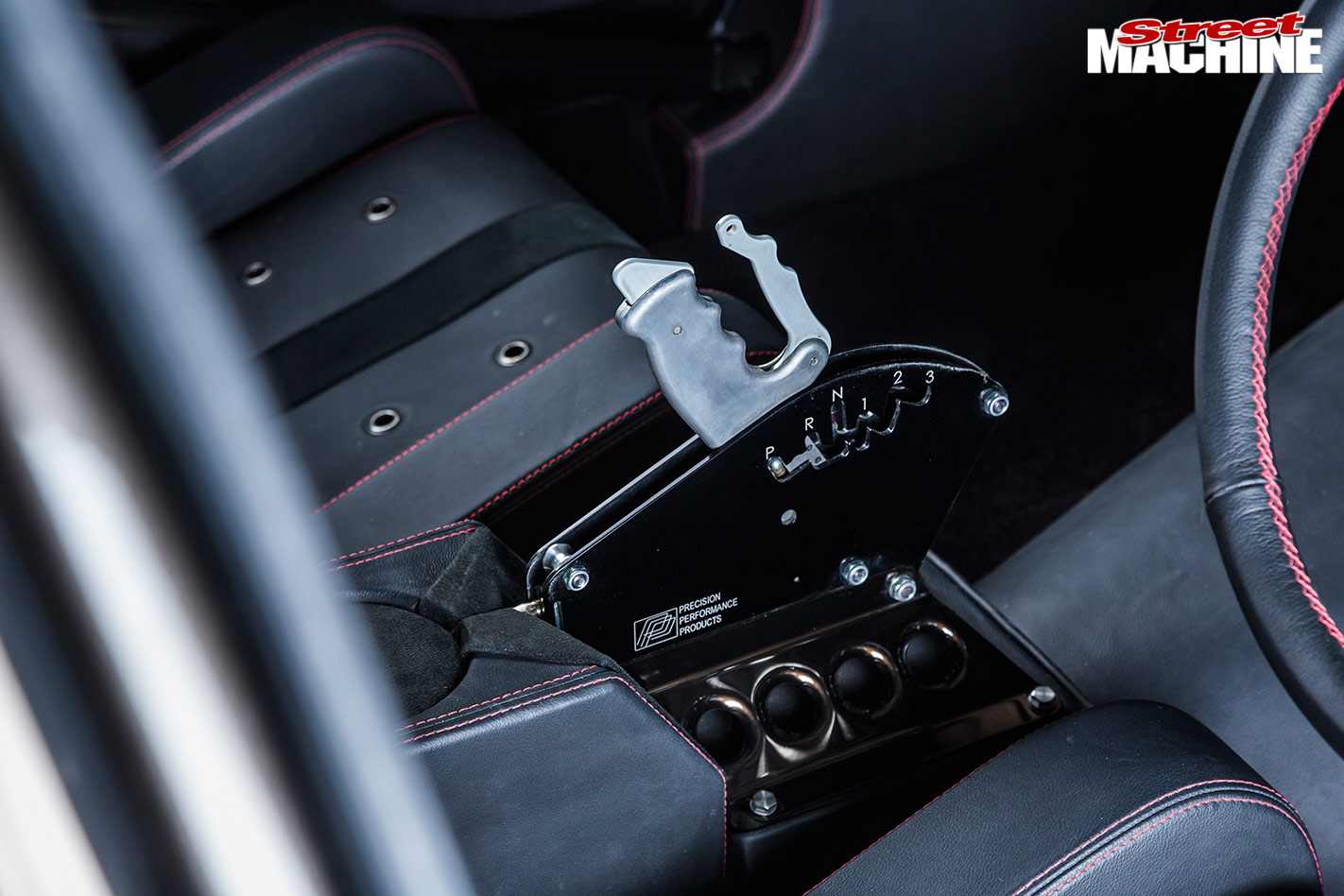 “Eventually I’ll race it,” he muses, “but the whole build was a constant challenge, so I’d like to keep it nice for a while and drive it a bit before heading to the track.”
Watch this space!

HEART OF THE MATTER

BFAT was built around its 434ci Dart-based small-block, which was lowered a couple of inches to get the tall CHI intake under the bonnet. 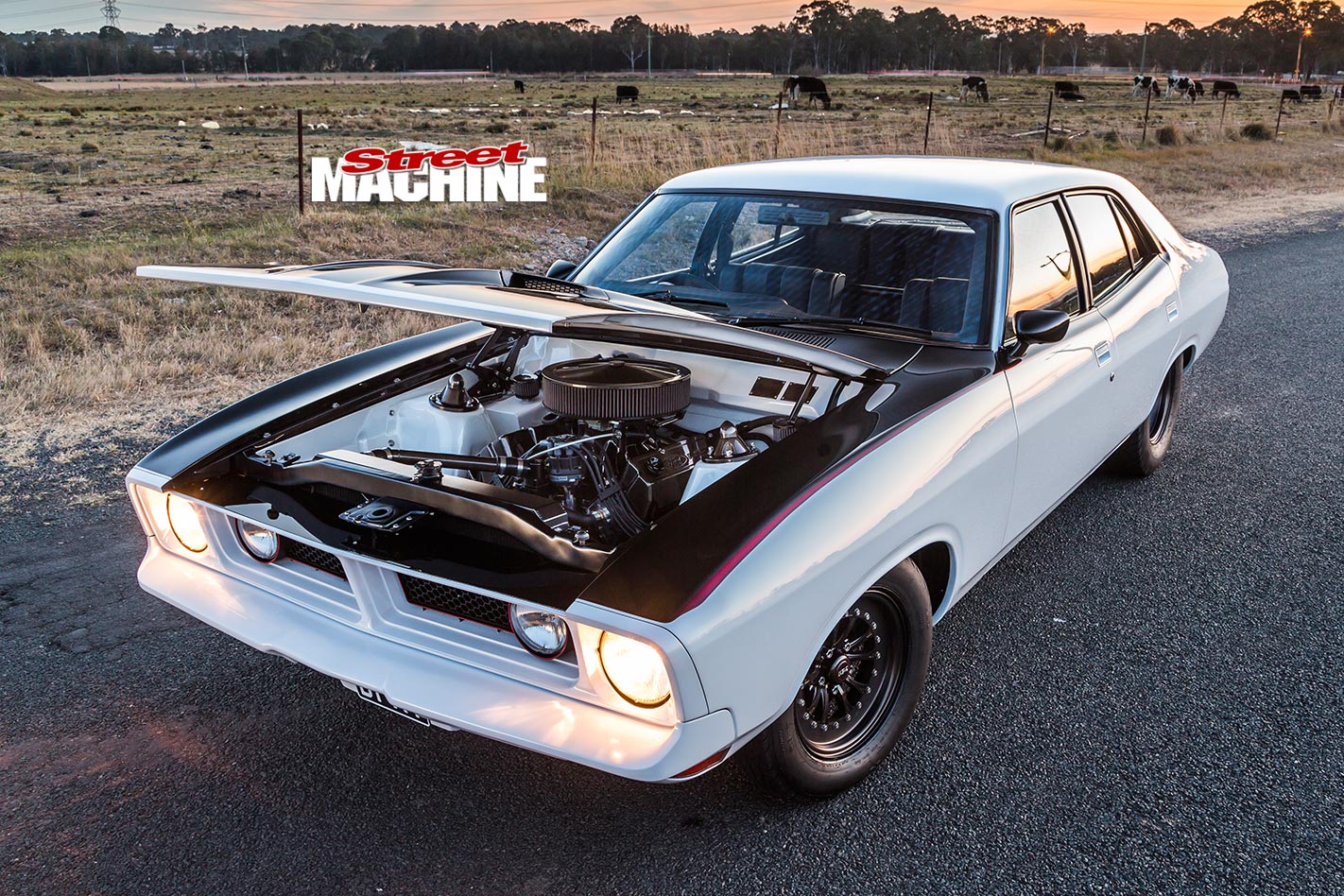 It was also shifted rearwards a total of eight inches to help weight distribution. Dowel-located engine plates front and rear ensure it stays put when those fat Mickey Ts hook up and begin making the most of its 754 horses. The original engine plates were solid-mounted, but engineer Mick Dudley directed Steve to modify them to accommodate nylon bushes, which gives the Falcon street-friendly manners.

Steve’s XB has been in the Bellia family since new. Originally a Tango Orange GS (below), Steve’s father bought it new off the lot in 1976 and used it as his daily driver until 2000 – it was the only car he owned during that entire period. 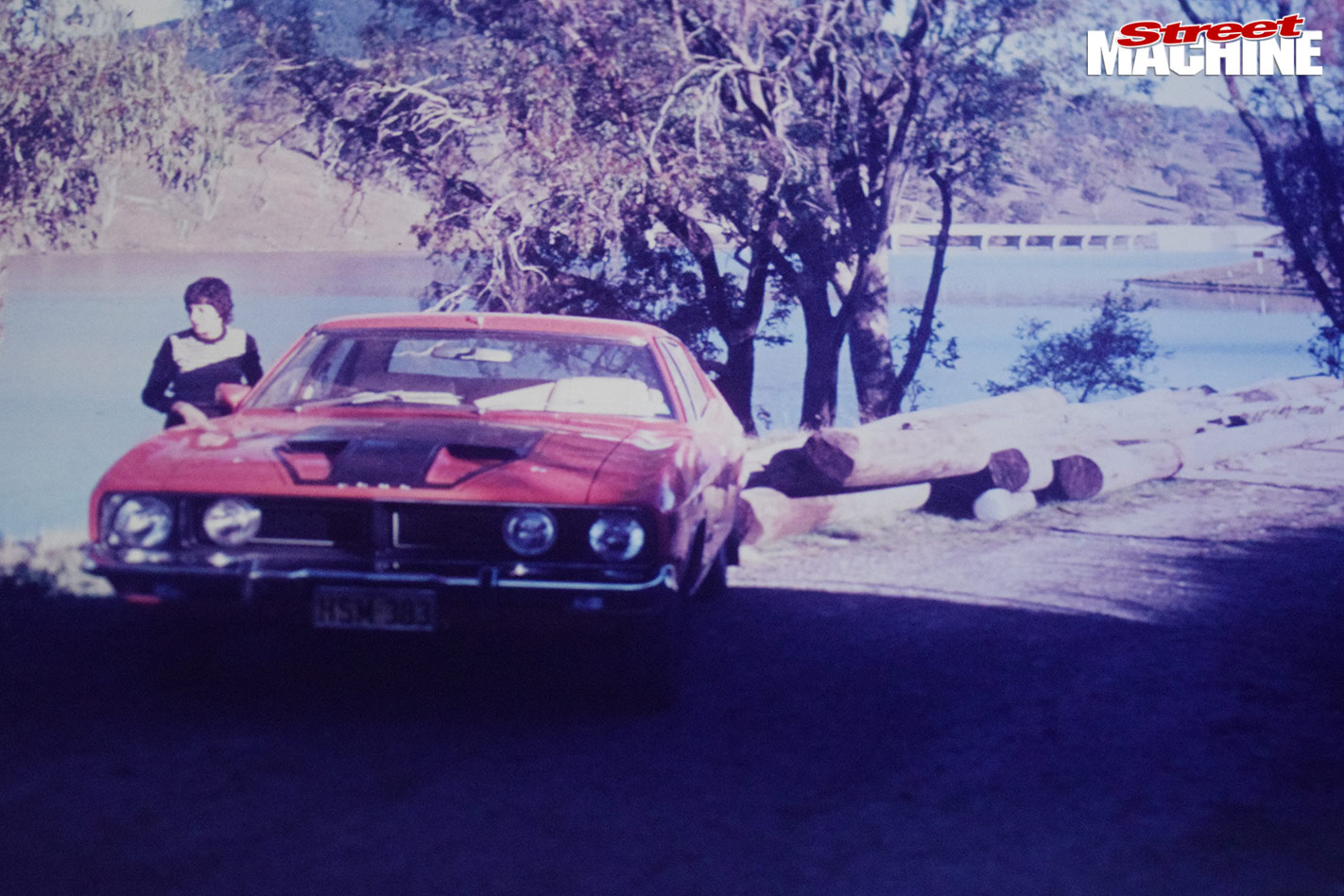 After sitting idle in the garage until 2010, Steve and his father decided to give it a full rebuild. “Once we pulled it down, Dad was like: ‘Wow, this is too much,’ and decided to just give me the car,” Steve says. “Which is about the point things got out of hand!” 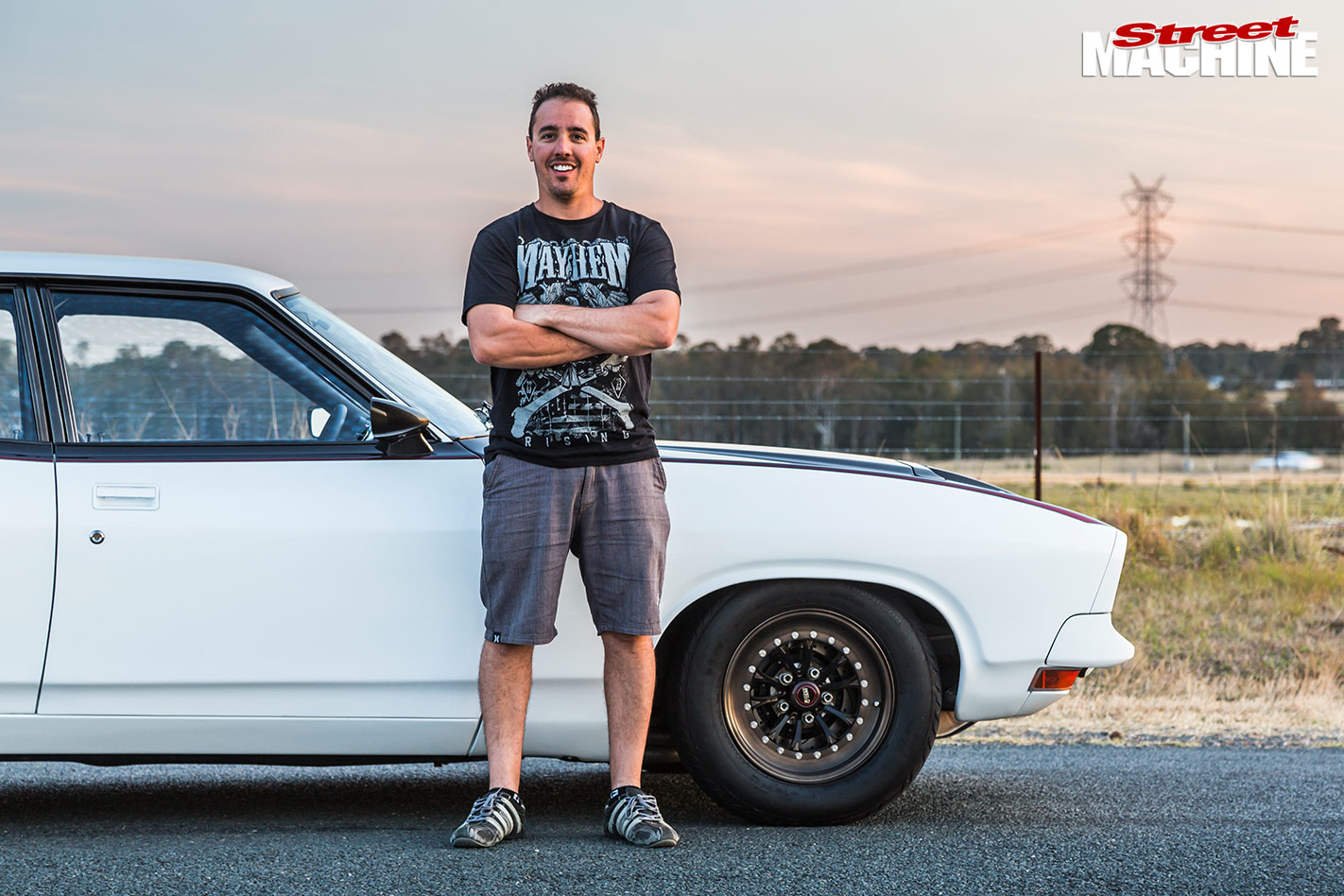