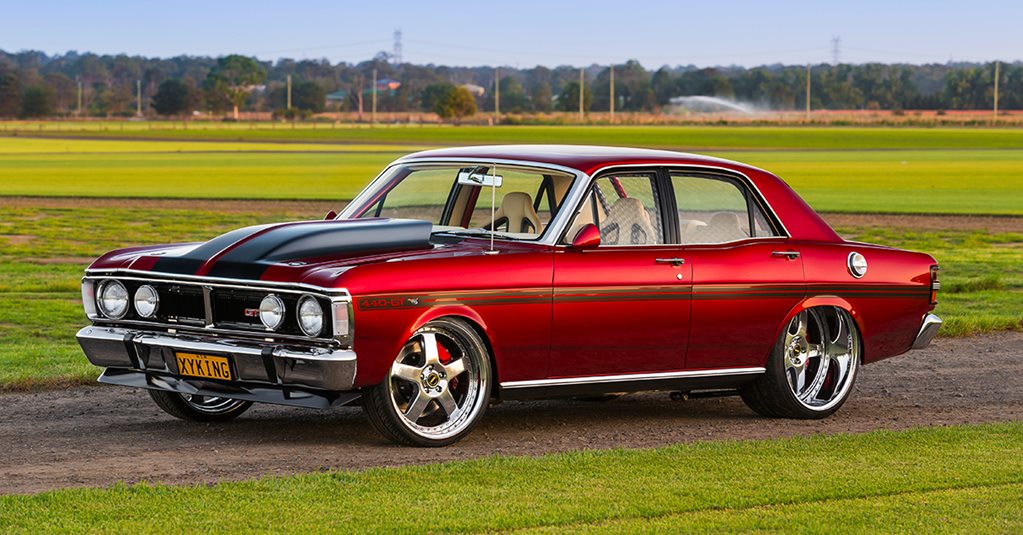 With 1600hp on tap and a show-quality finish, Simon Mokdassi’s 1970 Ford XY Falcon XYKING is the complete package 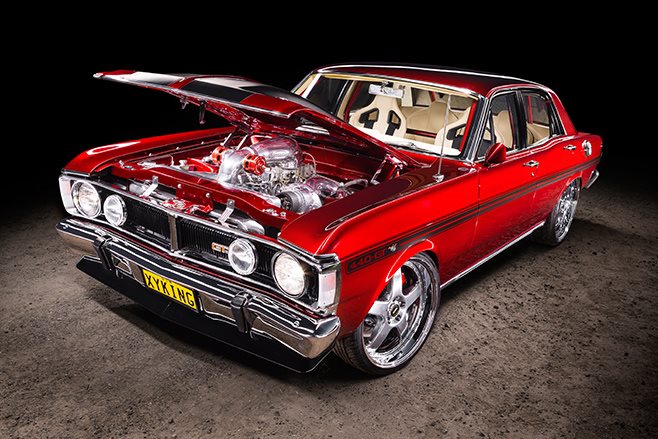 XY FALCONS are something of a tradition for the Mokdassi brothers. The family all share a profound appreciation for the Blue Oval, but although Simon Mokdassi now owns one of the finest examples in all the land in XYKING, he strayed from the pack with his first build. 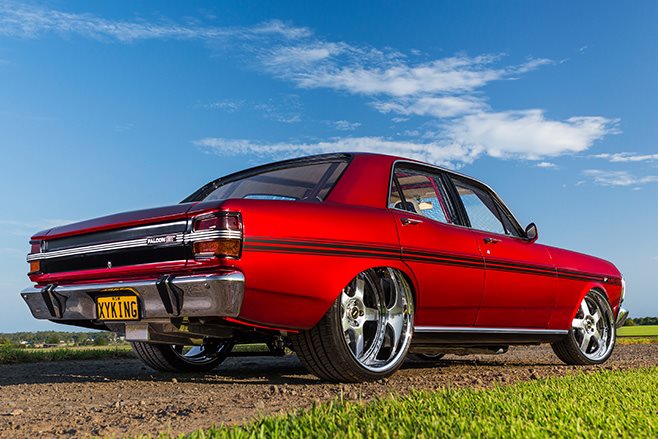 “Before I built the XY, I was into luxury cars,” he explains. “My first decent car was a BMW M3 known as CANDYMAN. I kept it for two years, then stripped it to a shell and sent the body to Queen Street Customs for candy red paint. I redid the interior in white leather, fitted 20-inch Lexani wheels, a cam package and an EMS ECU, and it won every car show in Adelaide between 2003 and 2004.” 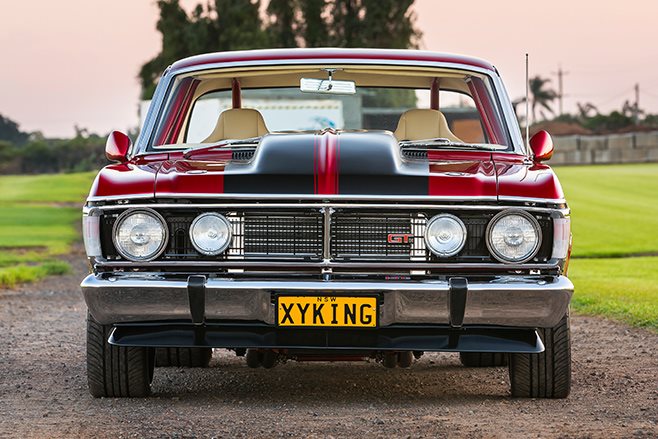 The build changed direction at the midway point and the car became far more show-oriented than what was originally planned, but beneath the shiny façade, this XY is very much built to get down

But a love for XY Falcons had always been with Simon, and when he relocated to Sydney around 10 years ago, he knew the time to build one was finally at hand. He bought the car from Murray Bridge in South Australia and dragged it home, where he and his brothers set upon it and stripped it, ready for soda-blasting. Simon and his father spent the next two years building what was a fine example of an XY GT replica. “A lot of late nights were spent with him. He was so fussy – everything had to be perfect,” Simon remembers. “We worked on it nearly every day, every night and on weekends. It looked beautiful in Track Red and I loved driving it, but I got sick of getting beaten by most cars I raced.” 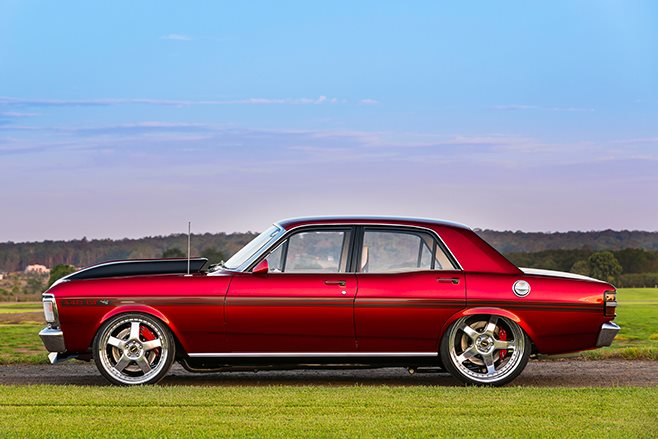 The wild ProCharger set-up prevented the use of a traditional GT shaker, so a reverse-cowl bonnet instead shrouds the charge pipe and blow-through hat from view

In went a 680hp, 408-cube Clevo stroker, and the tables turned in Simon’s favour. “Not only was I beating everybody, but I was powerskidding past them with thick clouds of smoke. It felt good for a few weeks until I blew the Top Loader, so I replaced it with a Protrans C4 and ran 10.4 down the quarter, but two weeks later it split the block at a street meet.” 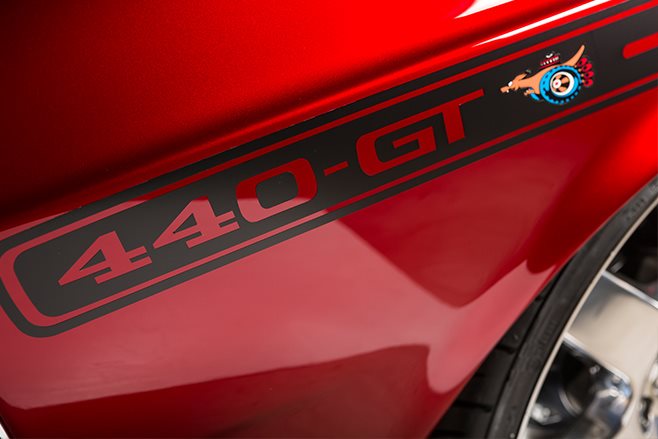 Although it’s been heavily contemporised, there’s no missing the car’s GT theme, with the stripes, blackouts and badging harking back to the GT Falcons of yesteryear

In five months Simon had replaced the motor in the XY twice, junked the gearbox and broken a bunch of other bits and pieces, and he’d grown a little frustrated as a result. He made the difficult call to yank the car off the road, with the objective of transforming it into what he originally hoped would be the toughest and quickest XY on leaf springs. 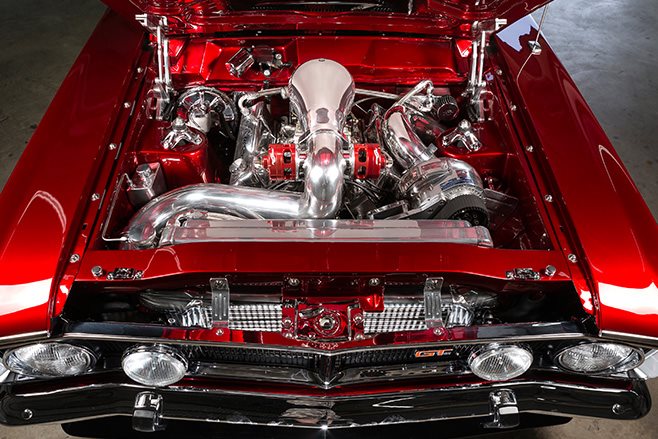 Simon stripped the car then unpicked the inner wheelarches and boot floor, swapping the left and right rear rails over to free up some real estate for bigger tyres. He then shipped it off to Con from Pro Street Metalcraft in Blacktown with a list of the fab work that needed to be done, including mini-tubs, a sheet-metal radiator support and boot floor, stretched rear quarters, a raised tunnel, front and rear engine plates, rollcage and a tailshaft loop. In the meantime, Sash from AN Racing put together a 406ci Windsor with an F1R ProCharger set to 26psi, which stomped out a convincing 1106hp on C16. 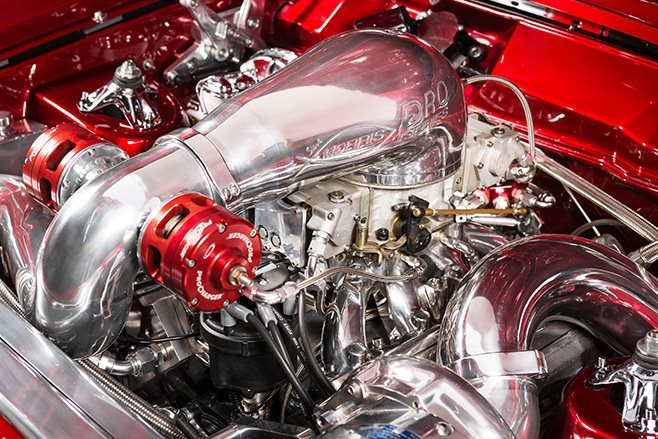 Considering that the engine it replaced made over 1100hp, this one had to be something special. The AN Racing-built 440ci Windsor has a thumping F2 ProCharger swinging off the side that’s currently configured to deliver 30psi of boost

Simon then took the car past Queen Street Customs to talk about a few paint touch-ups. “We got talking and ended up deciding to respray the whole car in Ferrari red,” he says. “We bought the paint and the car was sitting in the booth about to be painted when I changed my mind and decided I didn’t like the colour. I thought about it for 15 minutes and Mohammed suggested that we paint it Candy Apple Red – the same colour the BMW was.” 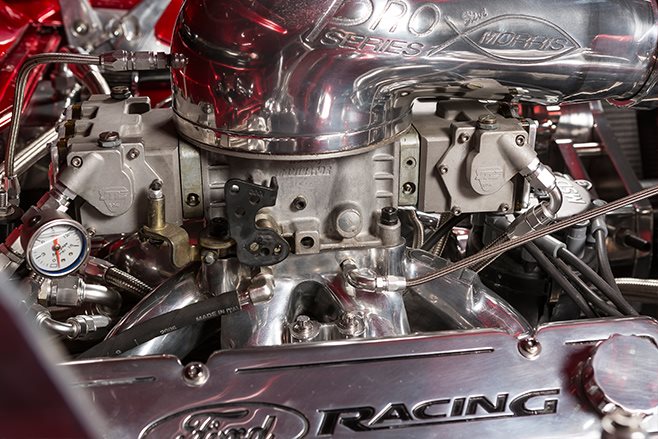 That moment represented a big turning point in the build. Simon had initially set out to build a drag car, and as such never intended to have a show-quality paintjob splashed across it, but when the paint came up so nicely there was no turning back. He stripped everything else back and sent various components off to be painted, polished and anodised. He sold off the 406ci engine and F1 ProCharger and told Sash at AN Racing that he wanted the biggest and baddest Windsor he could build, and enlisted the help of Elite Custom Interiors to kit out the cabin to an elite standard. 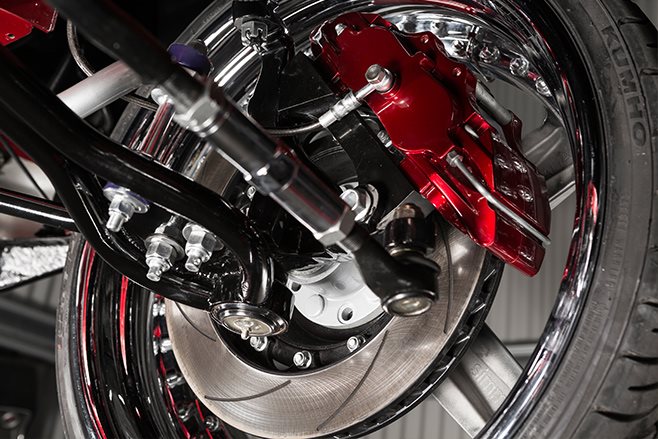 “At first it was only ever meant to be a street car, which is why I didn’t go to the trouble of a flat firewall or anything like that,” says Simon. “The build didn’t really go according to plan! I would decide on something, then do it, then change my mind and redo it again until I was happy with every part. This happened for three years.” 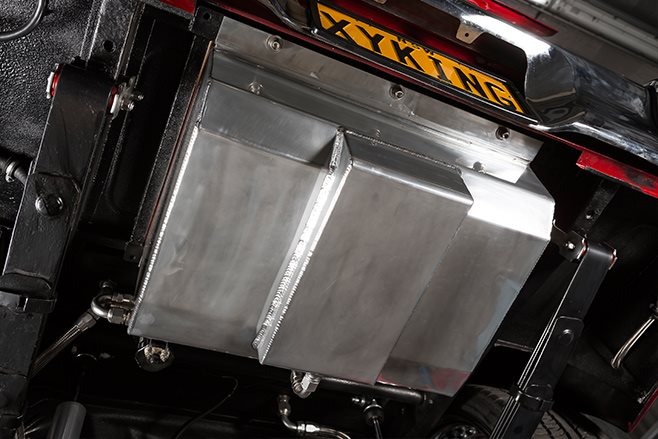 The new engine is a fearsome bit of kit. It’s still a Dart-blocked, ProCharged Windsor, but the cubes are now out to 440ci, the blower is a bigger F2 unit, the heads are a better-flowing set of CHI 3V Pro Series, and it’s running more boost compared to the old combo. It runs a Callies billet crank and rods, custom Arias pistons, a custom camshaft of .700in lift and 275° duration at .050in, and a filthy big 1200cfm Dominator blow-through carb on a CHI inlet manifold, so it’s built to make big power and hang together in the process. Simon’s hoping for 1600hp at the crank on C16. 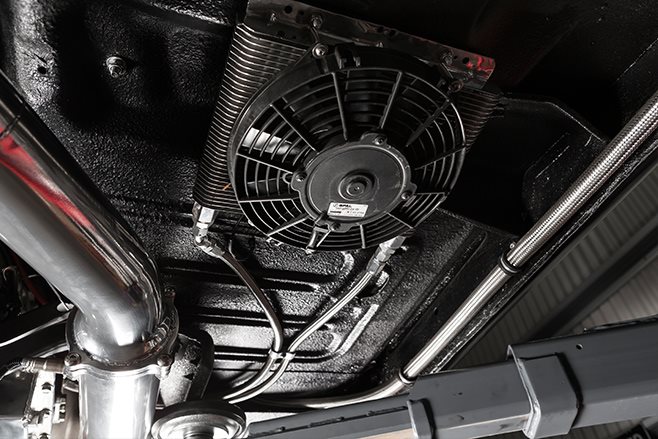 The ’box is a top-of-the-line Reid Racing ’Glide from Fred at Protrans, featuring a transbrake, billet internals, and a 5000rpm Coan Racing converter. A polished four-inch tailshaft heads rearwards to a braced nine-inch with a Mark Williams centre, 40-spline axles, and a 3.5:1 final drive ratio. 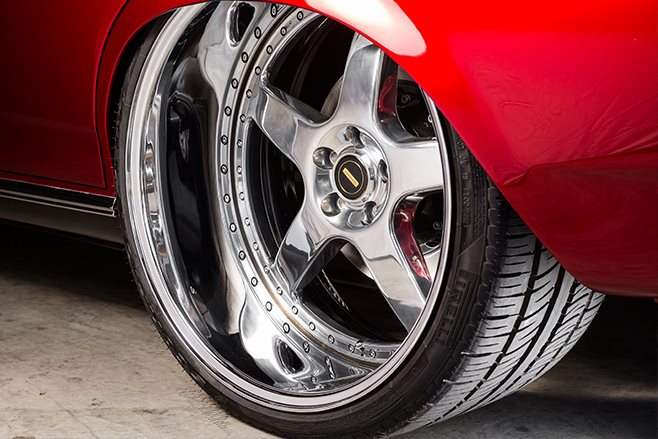 CalTracs-equipped leaf springs are teamed with Strange shocks, with tubular front wishbones and XYZ coil-overs at the pointy end. The car is not short on brakes, with dinner plate-sized 360mm rotors front and rear, and eight- and six-piston calipers respectively. Big brakes require big wheels, and Simon opted for Simmons FRs in 20x7 on the front and a massive 22x13in on the rear, wearing monstrous 335/25/22 Pirelli hoops. 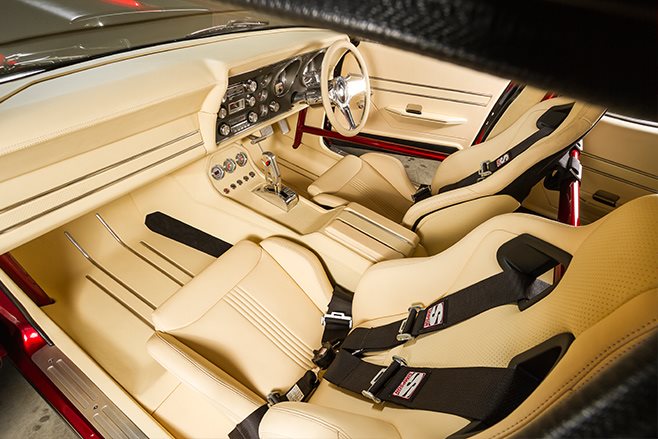 Everything from the flat floors to the roof was wrapped in leather and the place abounds with literally dozens of completely bespoke billet pieces. There’s also a six-point ’moly cage for safety

Stepping inside, you’re greeted by one of the most lavish interiors we’ve ever seen in a car with this much poke. Dreamed up by the owner himself and put together by Simon Judd at Elite Custom Interiors, it’s an exercise in extravagance. Front seats are Recaro CS, with the factory rear bench seat restyled in the same shape. The flat floors, custom door trims, front and rear console and the boot area all copped the same cream leather treatment. 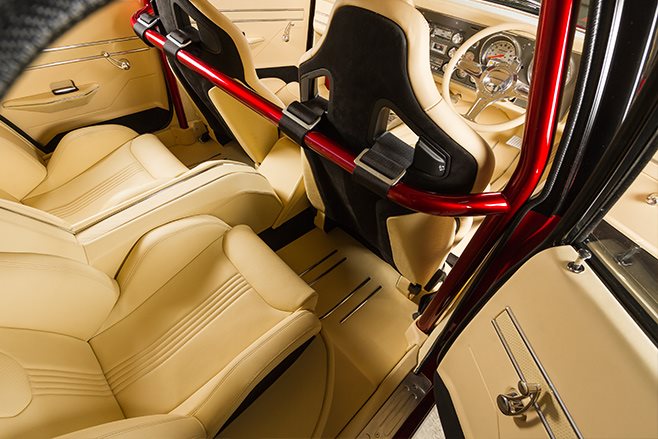 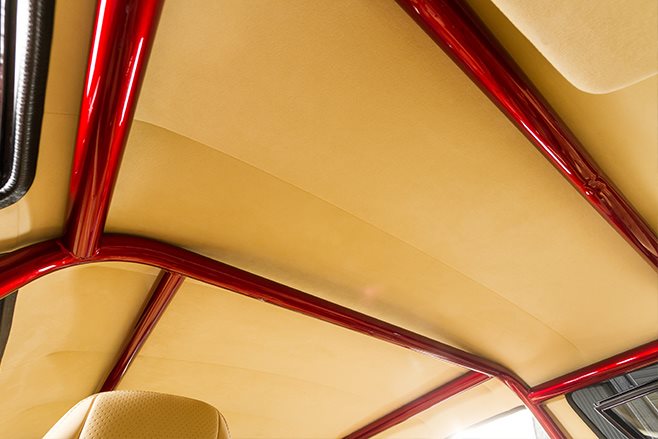 “Simon from Elite Custom Interiors is such a talented guy, and he’s the only trimmer who understood what I wanted. He spent 800 hours on the interior from fabrication to trimming, and the end result is perfect,” Simon says. “I designed each individual billet piece and used four different machinists to do all the billet parts. Lowe Fabrications did all the dash knobs in the interior.” 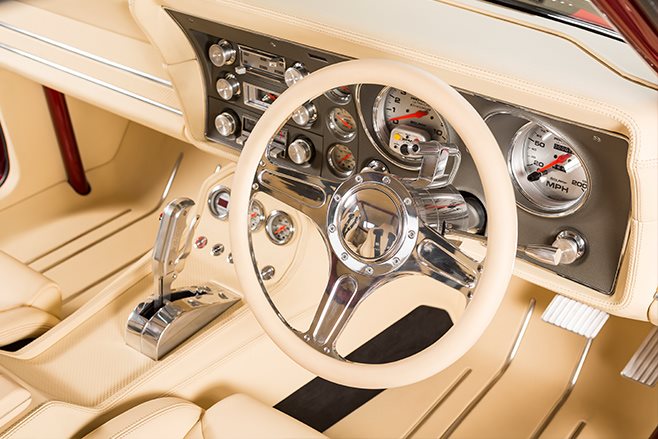 An automotive technician by trade, Simon tackled the whole assembly process himself at his own mechanical workshop. It was an exhaustive process that took many months of intensive after-hours work, and while his kids almost forgot what he looked like during that time, it all made sense to them when the sheets came off the car at the Meguiar’s Great Uncover at Street Machine Summernats 30. 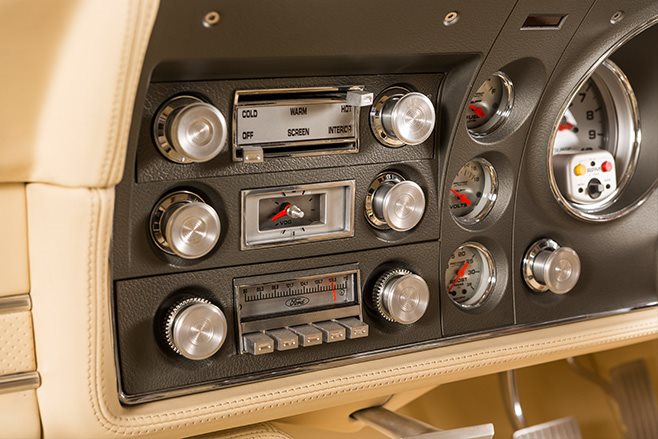 But Simon’s kids weren’t the only ones impressed with the XY down at the ’Nats. Judges and punters alike were pretty taken with the old girl, and it netted trophies for Top Interior, 2nd Top Sedan and 3rd Special Effects Paint in the street class, as well as People’s Choice in the hall. 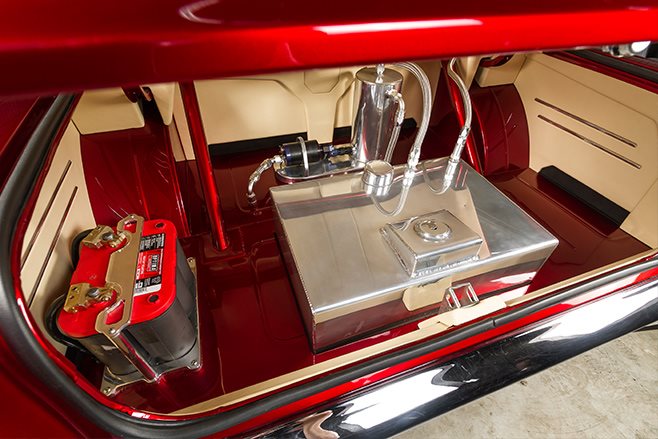 The luggage compartment houses a fuel cell, surge tank, Magnafuel pump and the battery, but everything’s detailed to such an extent that it all looks show-worthy anyway. The colour from the exterior and leather trim and billet highlights from the interior are neatly tied into the boot

Simon’s follow-up project is already underway – a VK Brock replica with mini-tubs, a parachute, chassis connectors, four-link rear end and a smoothed engine bay. “I’m heading for a pro street look, and of course it will be blown,” he says. “I’m building this one as a 100 per cent reliable cruiser that I can drive when I want. At the same time it’ll be built tough to handle big power and get punished at car events. Hopefully I’ll give Drag Challenge a try, too.”

Whether or not he gets carried away with this one remains to be seen! 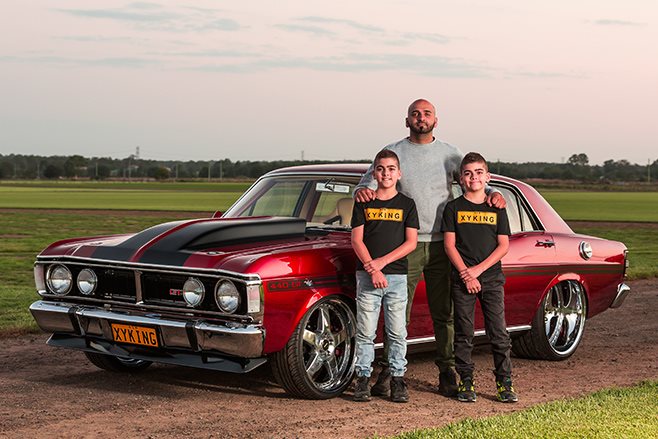