IT’S GREAT to see the recent resurgence in popularity of HK-HG Kingswood wagons. While the Monaros have always been hot property, the family-favourite longroofs spent many decades in the shadows. And let’s face it, any car that’s detailed to the nines and can also obliterate tyres with ease is cool, and the fact that people are using a model that was uncool for so long is even cooler.

This article was originally published in the April 2014 issue of Street Machine magazine. But one bloke who always saw the appeal of the five-door model is Nathan Magri. The plumber from Londonderry in north-west Sydney has turned what was once a dowdy grocery-getter into this smoothed, immaculately presented showpiece that houses a tough, tunnel-rammed LS-based engine and smashes the 20-inch Pirelli rubber out back with ease. Yep, this super-detailed Top 60 Summernats machine is a burnout car.

“I’ve always loved wagons,” says Nathan. “After I sold my last car I started looking for a project car, and this one popped up in Brisbane so I bought it sight unseen.” While that is normally the intro to a tale of heartache via rust, bog and missing parts, Nathan knew that buying any old car meant that plenty of hard work was required on the body. “There were no major problems, though being a wagon and how old it is meant it was hard to find good parts and good moulds.”

One of the downsides to 60s-era Holdens skyrocketing in popularity is that even the most seemingly trivial parts now attract serious price tags, thanks to a dwindling supply of original pieces in good nick. And HK-HG Kingswoods had a dizzying amount of optional brightwork, making the job of building one to the level Nathan has an expensive exercise. QUPNCY rocks the basic HG-spec chrome-work around the windows, nose and tail, with the bumpers coated in silver two-pack paint to match the plastic grille to a tee, while contrasting with the custom purple pearl. But don’t think for a second that the body has been left stock.

“The rolling shell needed a lot of work but Phil’s Body Repairs was a massive help getting it done. He did the flat firewall, smoothed engine bay, shaved the fuel filler and windscreen wipers, capped all holes along with welding and smoothing the bonnet.” The wagon came with tubs and a six-point rollcage when it made the trip down from Queensland, but Nathan cut the rear end out and fitted a whole new rear clip. Nathan needed bigger tubs to house the super-negative-offset 20x12-inch billets sitting on a Ford nine-inch that has been fitted with a full spool centre, Moser 31-spline axles and a 3.9:1 final drive.

The Blue Oval diff swings off a four-link rear end that uses King springs and Strange shocks, while the front features Koni shocks and another pair of Kings. A pair of 20x8-inch wheels hide 330mm disc brakes and twin-pot UPC calipers, while Nathan also replaced the old steering box and linkage system for a more space-conscious rack-and-pinion set-up from an LX Torana. This move is needed when fitting an LS1 into a first-generation Kingswood (along with an off-the-shelf Moroso rear-hump sump), though QUPNCY actually rocks the six-litre L98 Gen IV variant of the ever-popular LS mill. As used in VZ-on non-HSV manual V8 Holdens, the L98 is a good bit of gear, with higher-flowing square-port heads in place of the earlier LS1 ‘cathedral-port’ jobbies. 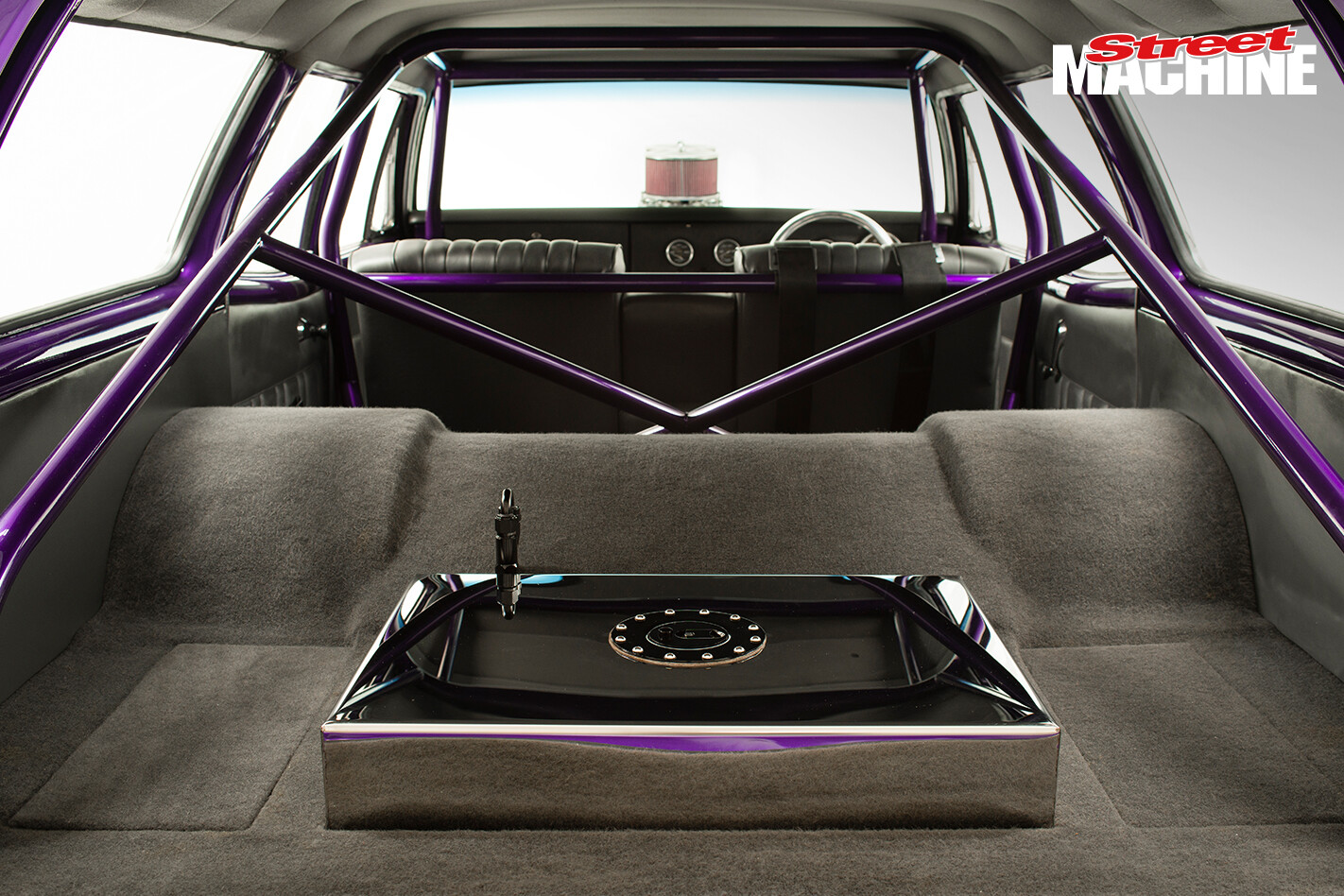 While the bottom end of the donk in the HG only copped fresh bearings, the top end scored a more thorough tidy-up by HiTech Modifications, in preparation for some serious tyre abuse. There are Yella Terra 1.7 rockers, a Comp Cams camshaft, valve springs and lifters, Trend pushrods and Ferrera valves. You can’t really miss the high-rise Holley tunnel ram and twin 650 Quick Fuel carbs jutting out of the bonnet, but they’re required for the deep-breathing Chev, especially with its voracious appetite for methanol. 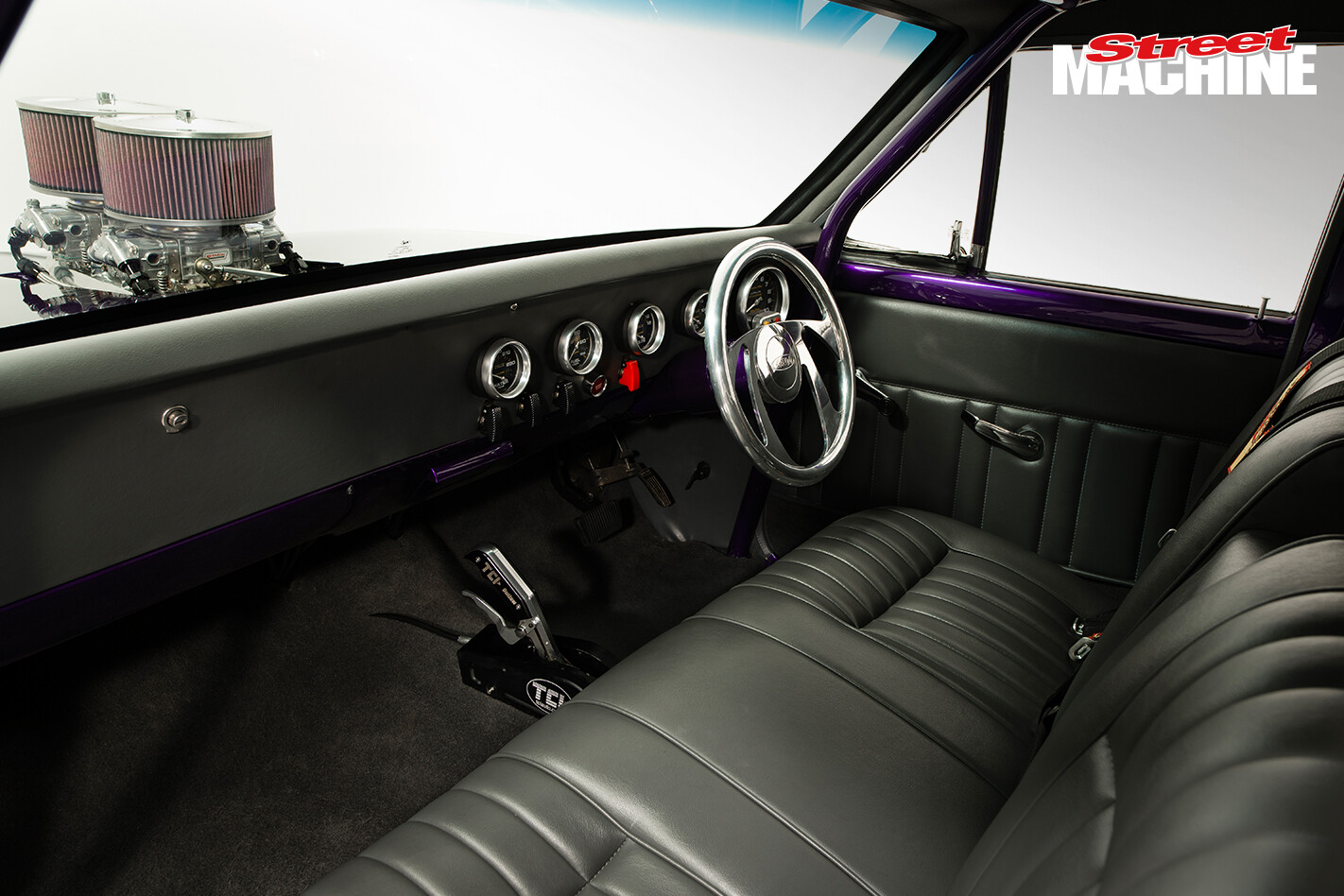 The Powerglide behind the rowdy bow-tie has copped a few choice upgrades to deal with the abuse Nathan is going to dish out. The Turbo 400 input shaft and deep oil pan will hopefully help it hold together when QUPNCY joins the rest of the H8TREAD Racing burnout crew in smashing tyres at all the big street machining events around Oz. As immaculately finished as the body and engine bay is, the interior is a work of art, blending stock parts with custom creations to make a functional but stylish cabin. Swathed in charcoal and grey, the original HG bench and door trims have been re-trimmed in vinyl, with a TCI shifter and billet steering wheel standing out as new additions, along with the Auto Meter instruments in the sheeted-off dash panel. There’s no backseat, so the carpet runs from the firewall all the way down to the tailgate without interruption.

Nathan counts the car’s debut at Summernats 27 and the encouragement trophy it took home as the high point of the build. “Bringing it to Summernats for its first show was great, and for it to be in the Top 60 Elite Hall was awesome.” “I have to say thanks to every single person that has had any part in helping me with the car, big or small. The car wouldn’t have ended up the way it has without great family and friends.”