THIS article on Joe Yezzi’s ’74 Chevy C10 was originally published in the April 2016 issue of Street Machine magazine.

IT’S a funny thing, but when you’re at a huge show in the US where there are thousands of stunning cars, it’s tough to find one that stops you in your tracks. There are so many cool machines to see that it takes something extra special to make you take a break and have a proper look. But Joe Yezzi’s ’74 Chevy C10 is one of those pieces of machinery that everyone loves. 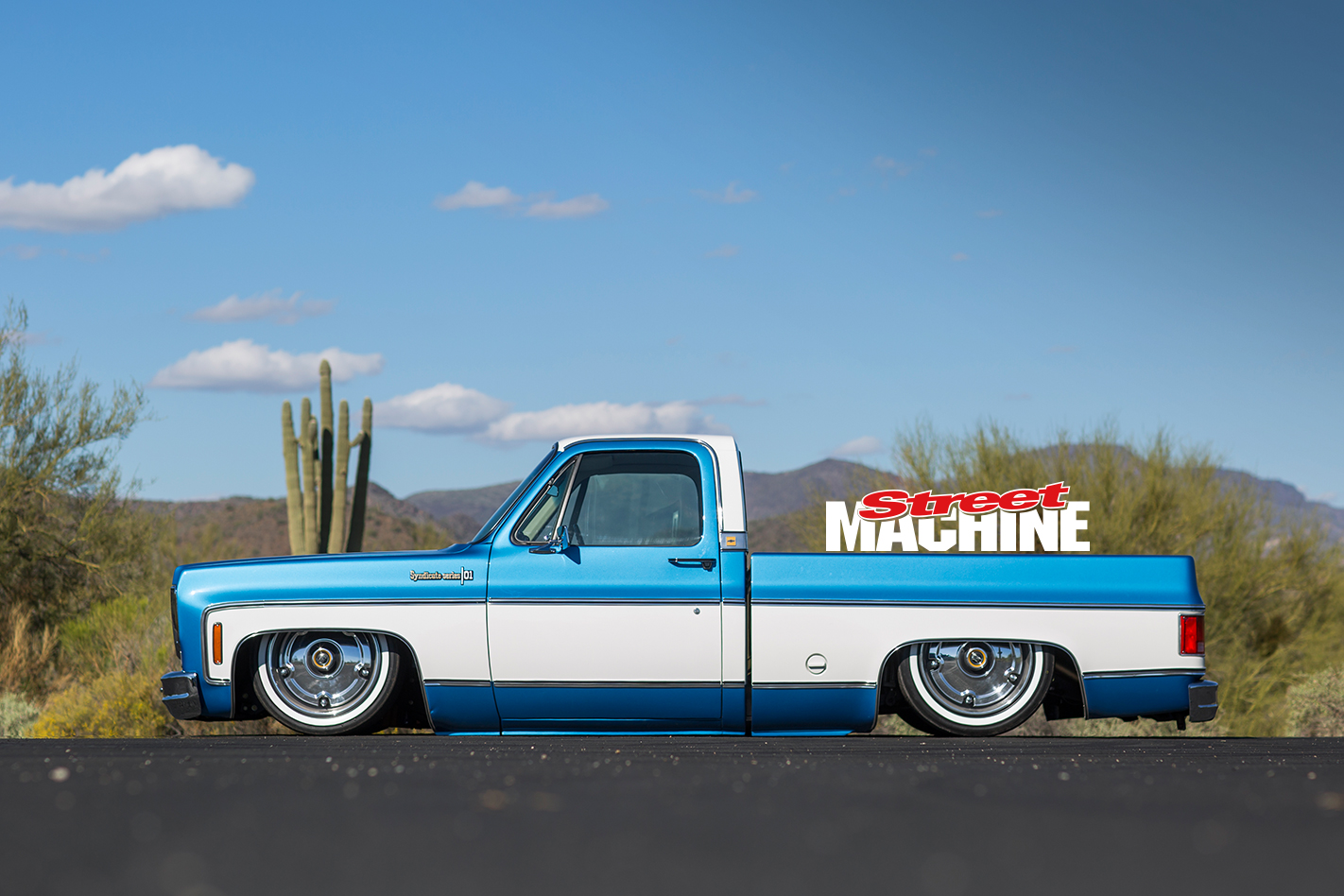 It has a universal appeal that attracts people of all types, from your regular Joe Public who just sees it as a nice old truck, to more discerning viewers – people like you and me – who know that even though it looks like a neat old rig with a nice paintjob, there’s a lot more going on. 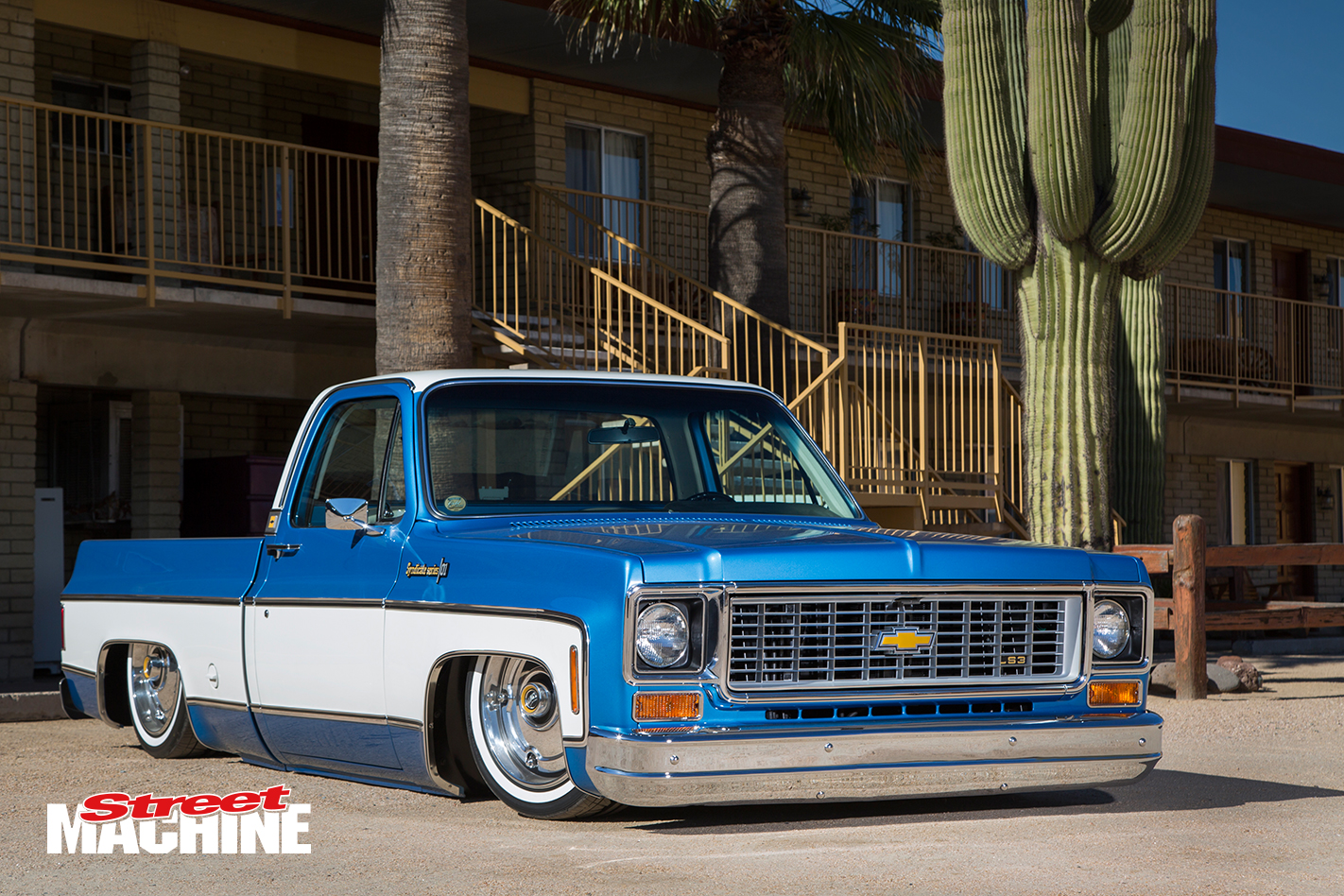 It’s no surprise that Joe chose this particular model for his stock-locking but slammed creation; he’s a long-time aficionado of Chevy C10s and came up with the Squarebody Syndicate brand to celebrate them. “I started the brand out of public demand from my Instagram page,” he explains. “I would just post pictures of my trucks, which is a hobby, and people liked the name so much they suggested I make a logo. So I had Brian Stupski [of Problem Child Kustoms], who does renderings for Chrysler and Ringbrothers and stuff like that, make the logo. I wanted it to look like the badge on the side of the fender, so I used the same font that GM used back in ’73. 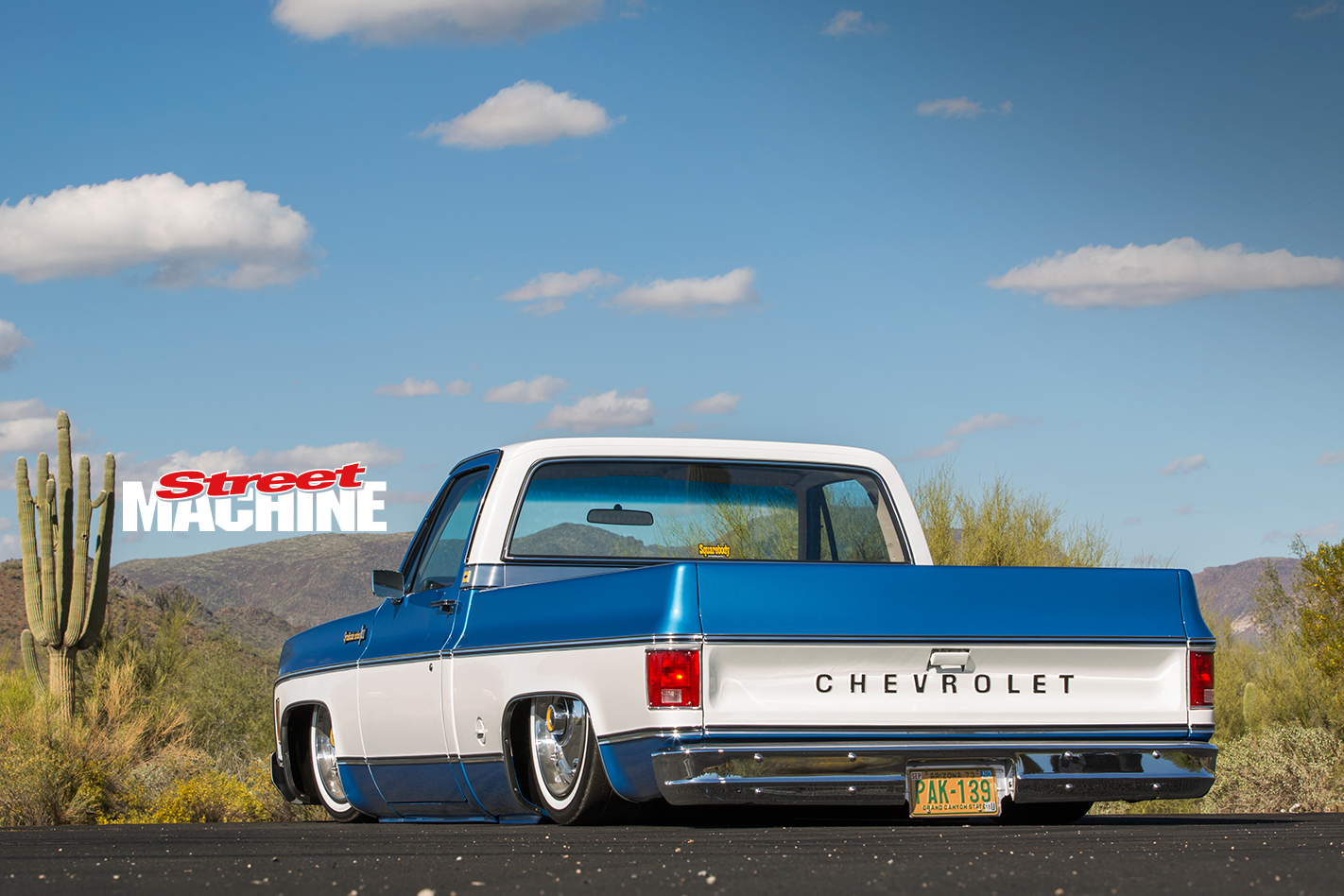 “We made the logo and people liked it so much they wanted shirts and decals,” he continues. “We made a few of them and sold out before we even put them on the website, so we made more and before we knew it, the guys from Fast N’ Loud were wearing it and we just couldn’t handle the sales. We went from 1000 followers to 60,000 in a year. I just can’t believe how many people love the squarebodies as much as I do – I thought I was the only guy out there that loved them.” 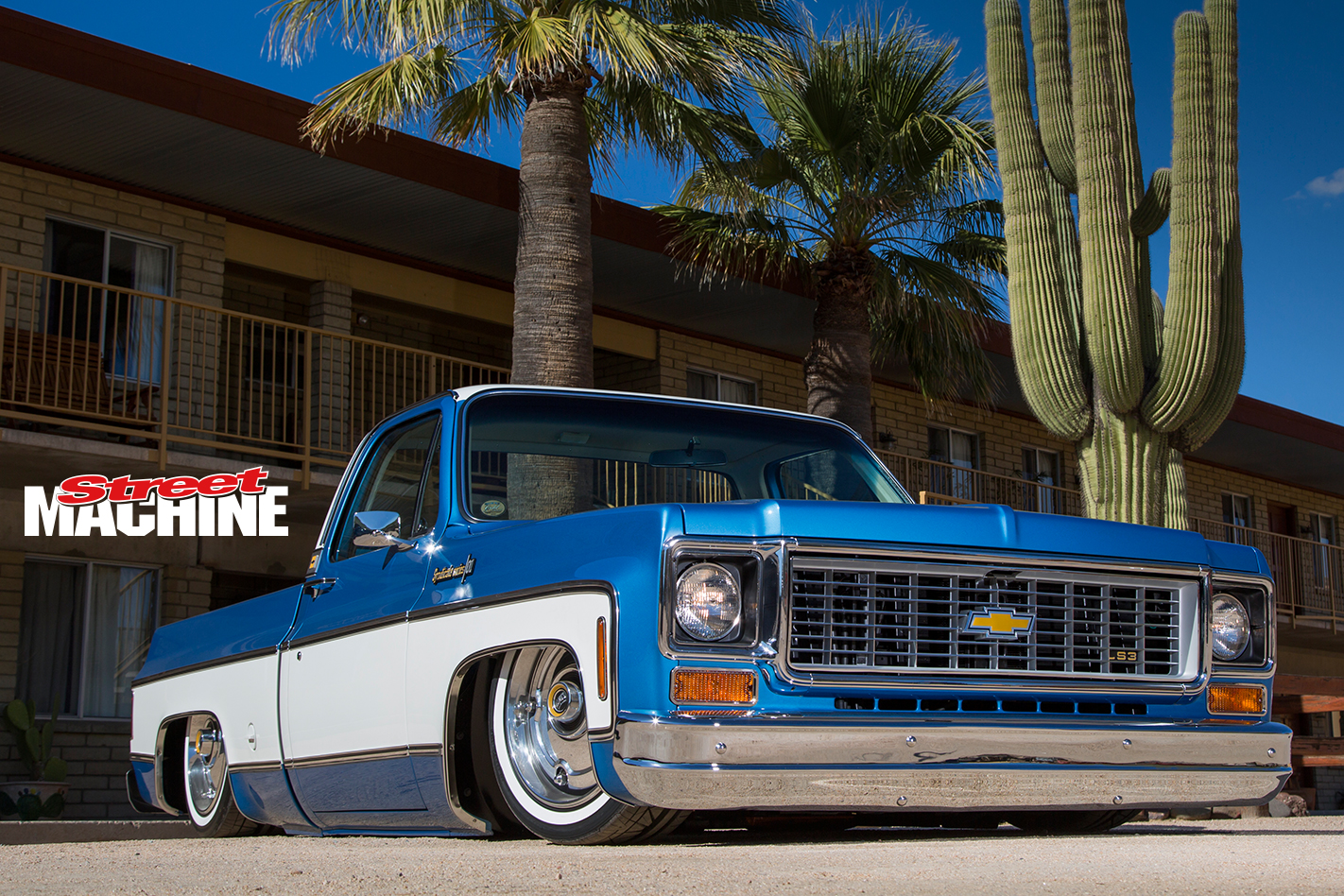 Joe’s passion for all things C10 is deep-rooted, going back to when he was a young kid growing up in New Jersey. “My old man bought one new in ’73 and I grew up in it, that’s why I love ’em,” he says. “But I started working on them about eight years ago. I found one, fell in love with it and have been wrenching on them [ever since] and having a lot of fun doing it.” 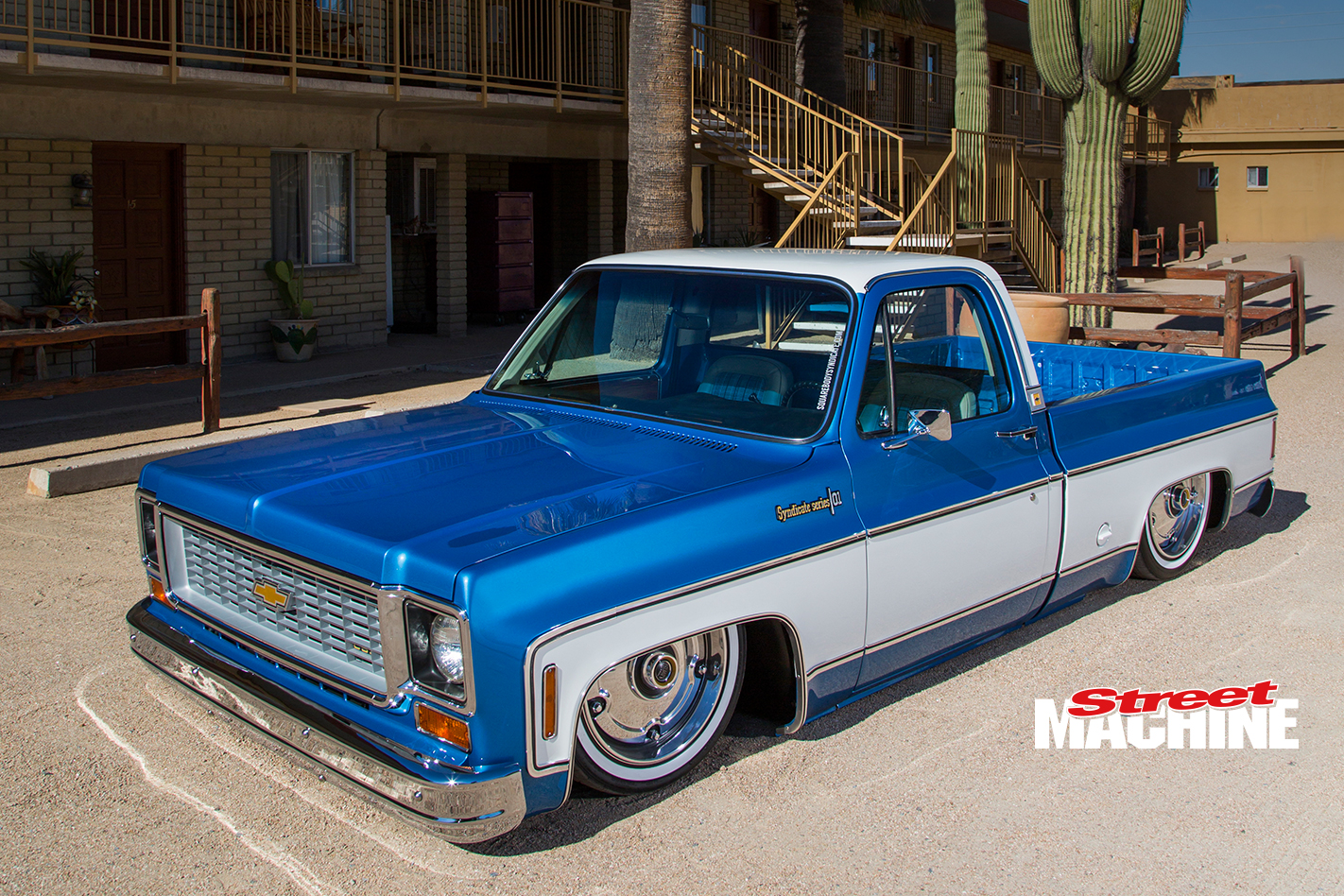 The way that Joe builds these trucks has such a following there’s even a hashtag that describes it – #yezziclean. You could consider his build style a 100-point restoration with a major adjustment in altitude and attitude. His love for original paint schemes and interior trim is obvious in the C10 featured here; it’s just a hell of a lot cleaner than how the factory built them. “There are a lot of little things on the truck that are upgraded but look stock,” Joe says. “The whole concept is to embrace the GM heritage, so what we do is take the things we love on the truck and just enhance them. “All of the knobs, the window cranks, blinker knob, shifter knob, even the cup holder on the armrest is billet aluminium, but because it’s anodised black, you wouldn’t look twice at it.” 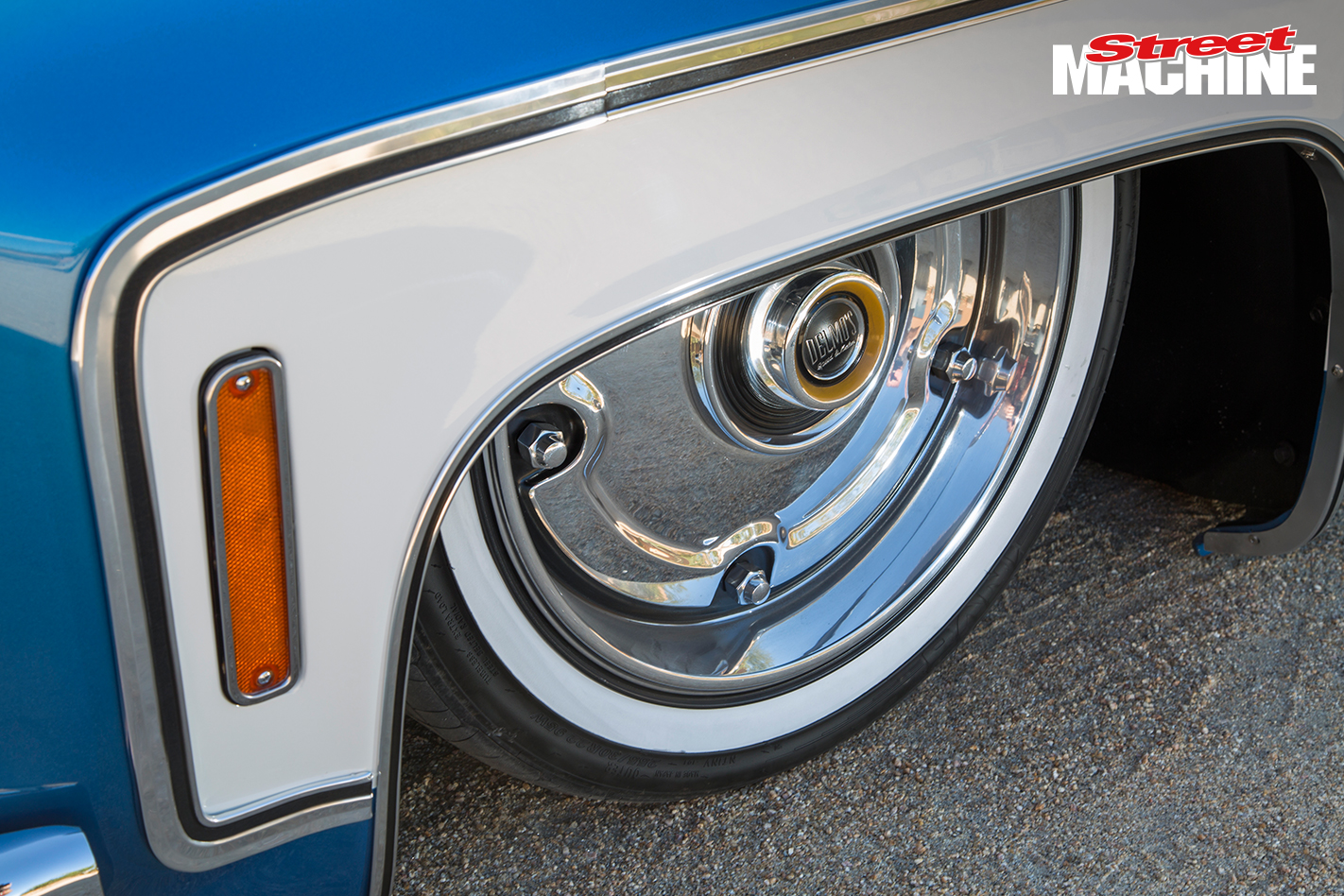 Even the wheels, which are obviously quite a bit bigger than stock, are based on a factory-style 15-inch hubcap. The whitewall is also part of the rim, so while they’re 22 inches in diameter, they’re quite nicely disguised. “It’s a one-off wheel that Mike Curtis [ex-Boyd Coddington] did for Delmo’s Speed & Kustom that duplicates the CST hubcap that was an option in 1973.” 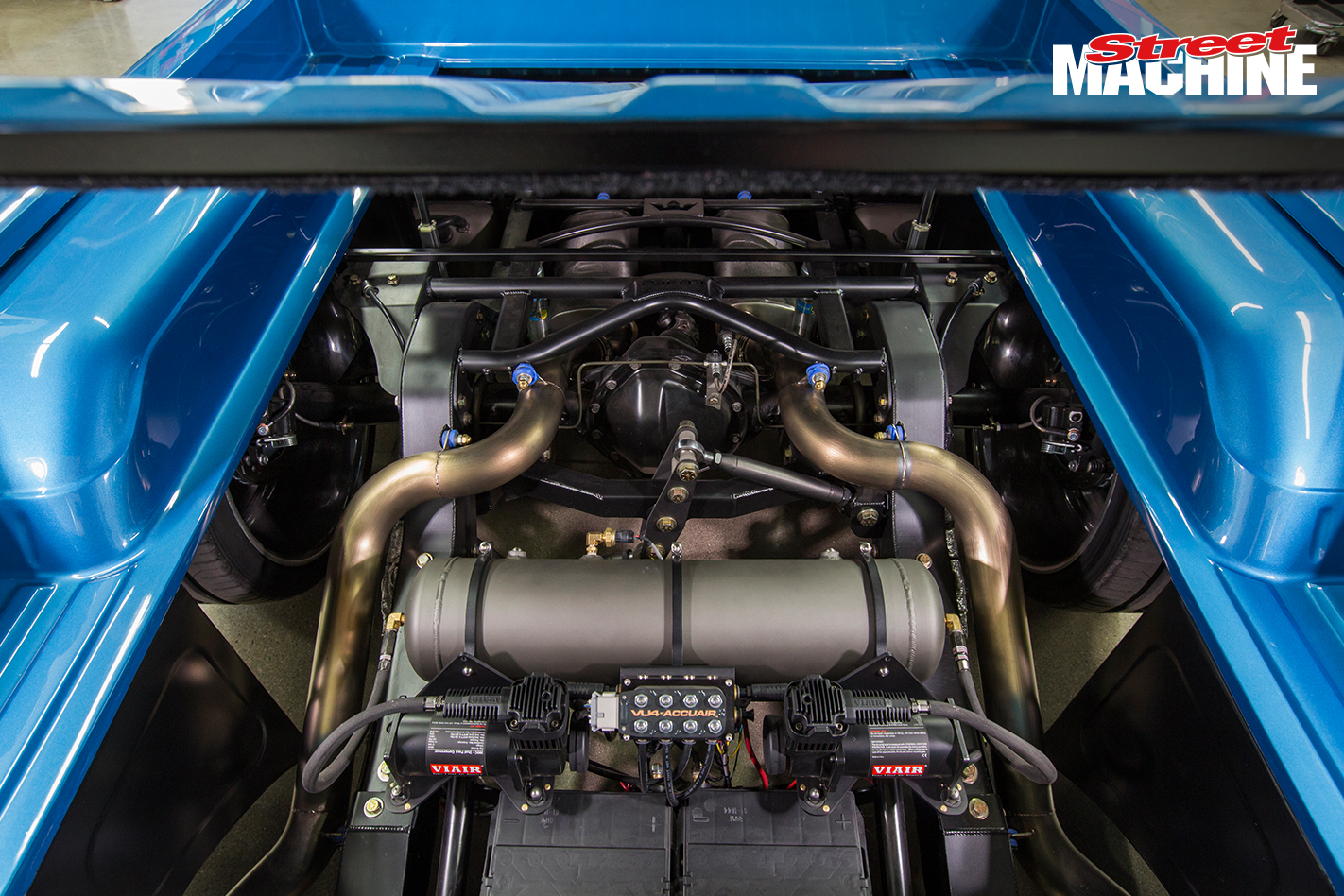 The paint is the original Catalina Blue and Frost White but done with the new technology of a water-based paint, so the metallic really sticks out on it. It’s Joe’s favourite colour combo and he paints all of his personal trucks the same. 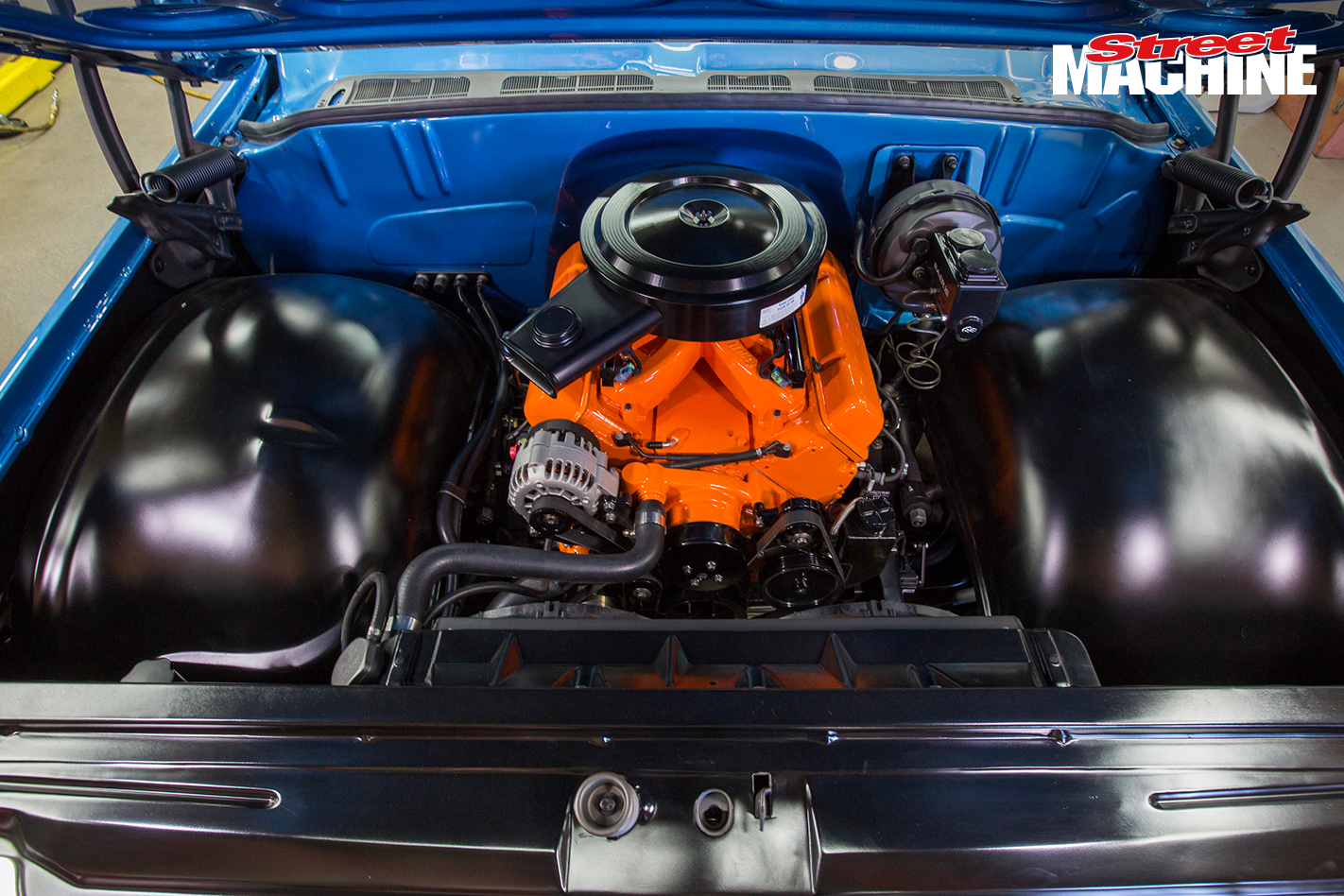 The stock-but-tweaked theme carries through to the engine bay, where an LS3 has been cleverly disguised to look very much like an early small-block. It fooled me the first time I walked past the truck and it wasn’t until I came back around for a closer look that I noticed the Holley EFI fuel rails. Apart from the old-school Chevy orange paint, there are a few other touches that go a long way to hiding the LS origins of the motor, and they’re also the brainchild of Delmo’s. In fact, the motor is dubbed the DELS3. 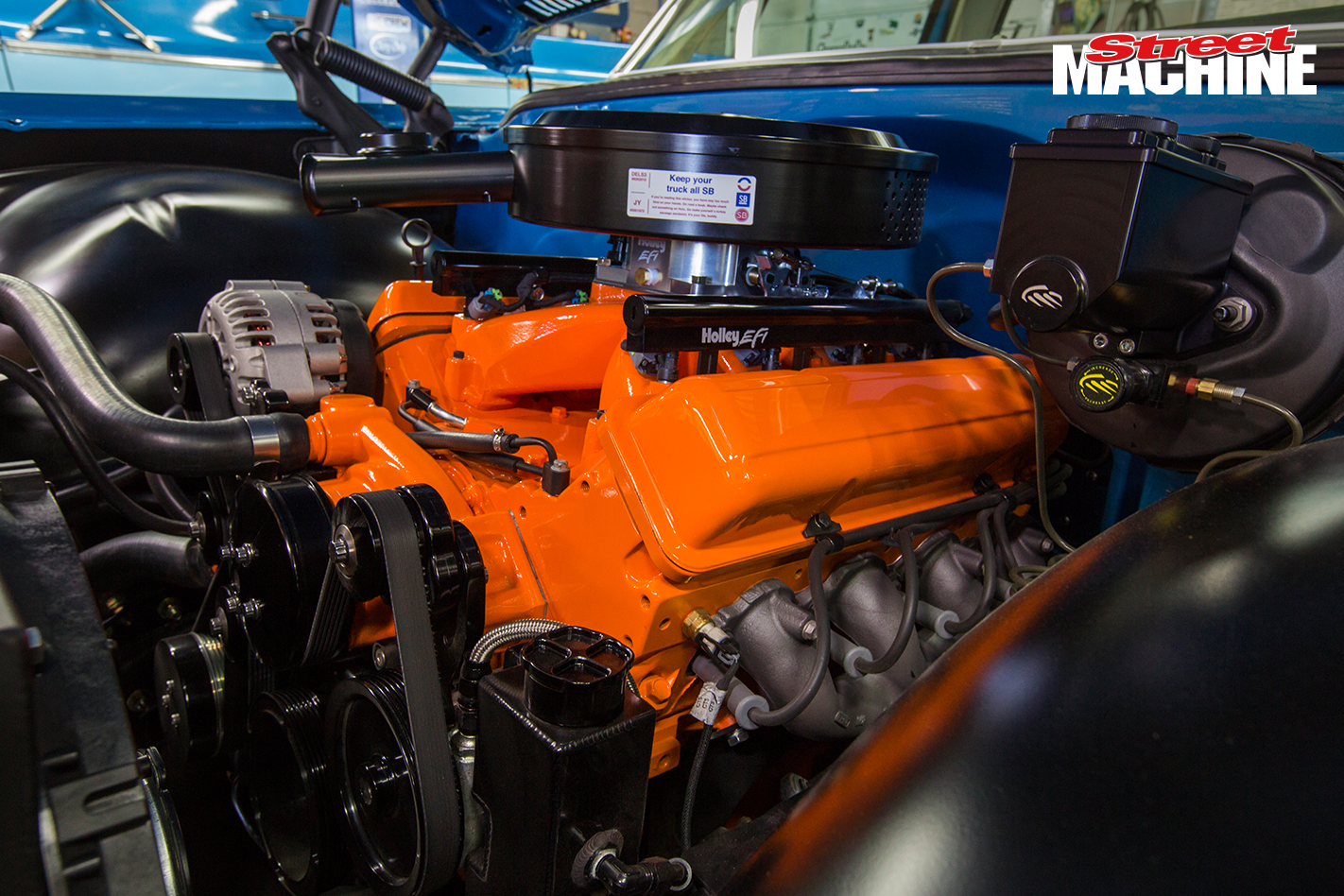 “It’s a brand new LS3 Corvette crate motor,” Joe says, “but we relocated the coil packs and then put some valve cover spacers on there so we could run the small-block covers. We welded up the holes and straightened them out. It’s got a Holley EFI intake with a throttlebody and we had the pulleys custom-made by Drive Junky so that they were solid, to look like steel ones.” 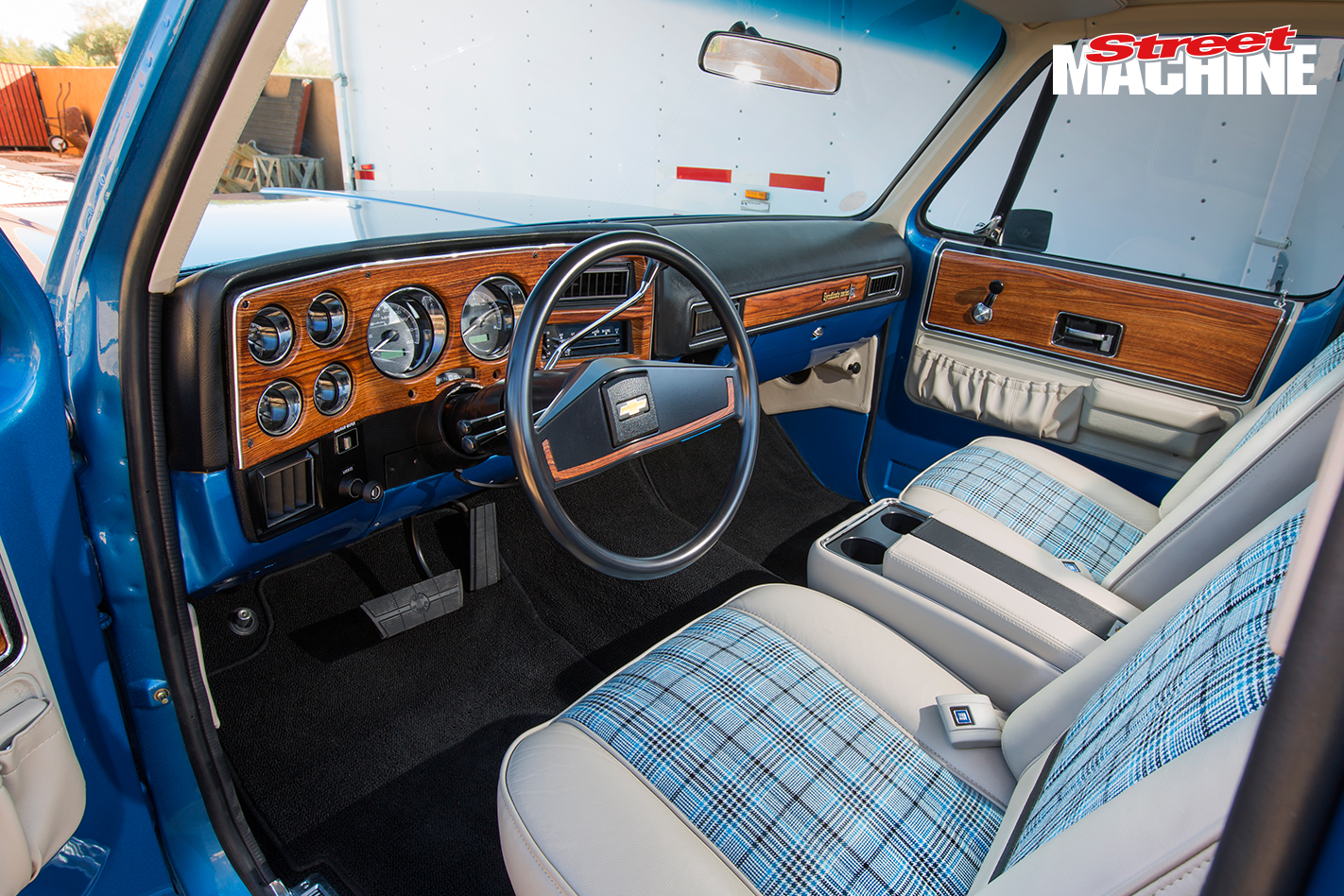 Hiding the Holley EFI system is what appears to be a standard tin air cleaner, but that’s not the case at all. GSI Machine & Fabrication created a bunch of stock-looking pieces from billet. “The steering wheel is billet aluminium, the air cleaner is billet aluminium – it’s a $4000 air cleaner – and instead of polishing them, we just anodised them black.” Joe explains. In the case of the air cleaner this didn’t change the functionality at all, but the steering wheel was reduced in diameter from 16 to 14.5 inches and the grip was thickened a little, with the stock horn button and woodgrain insert kept to complete the charade. 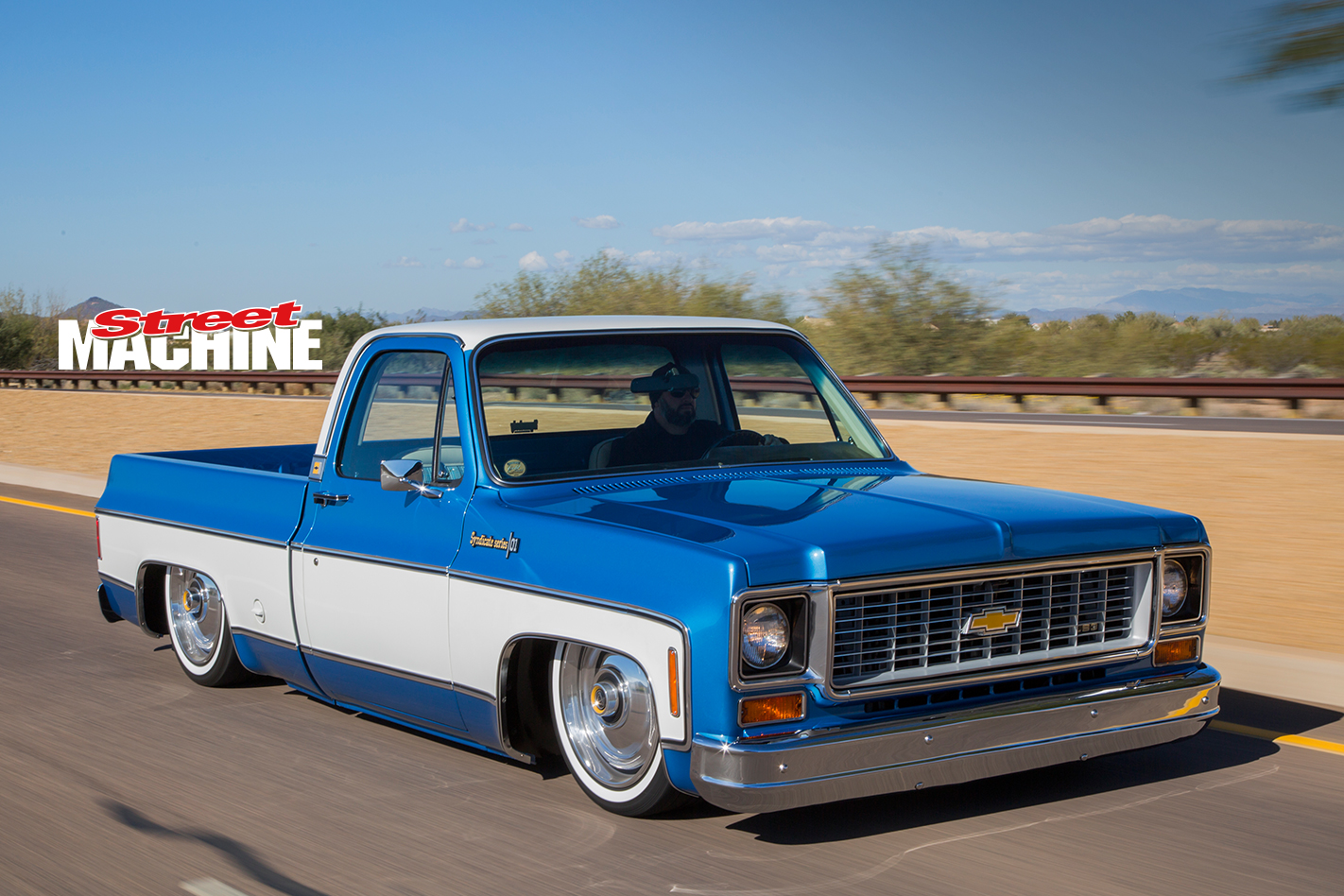 One thing that’s definitely not stock is the ride height, and to get the truck ‘laying pinch’ – as they say in the game – it required a fully customised chassis from Porterbuilt Fabrication. “Everything on it is one-off because we wanted the truck to lay completely flat on the ground, so we designed the chassis and body drop to do that,” Joe says. 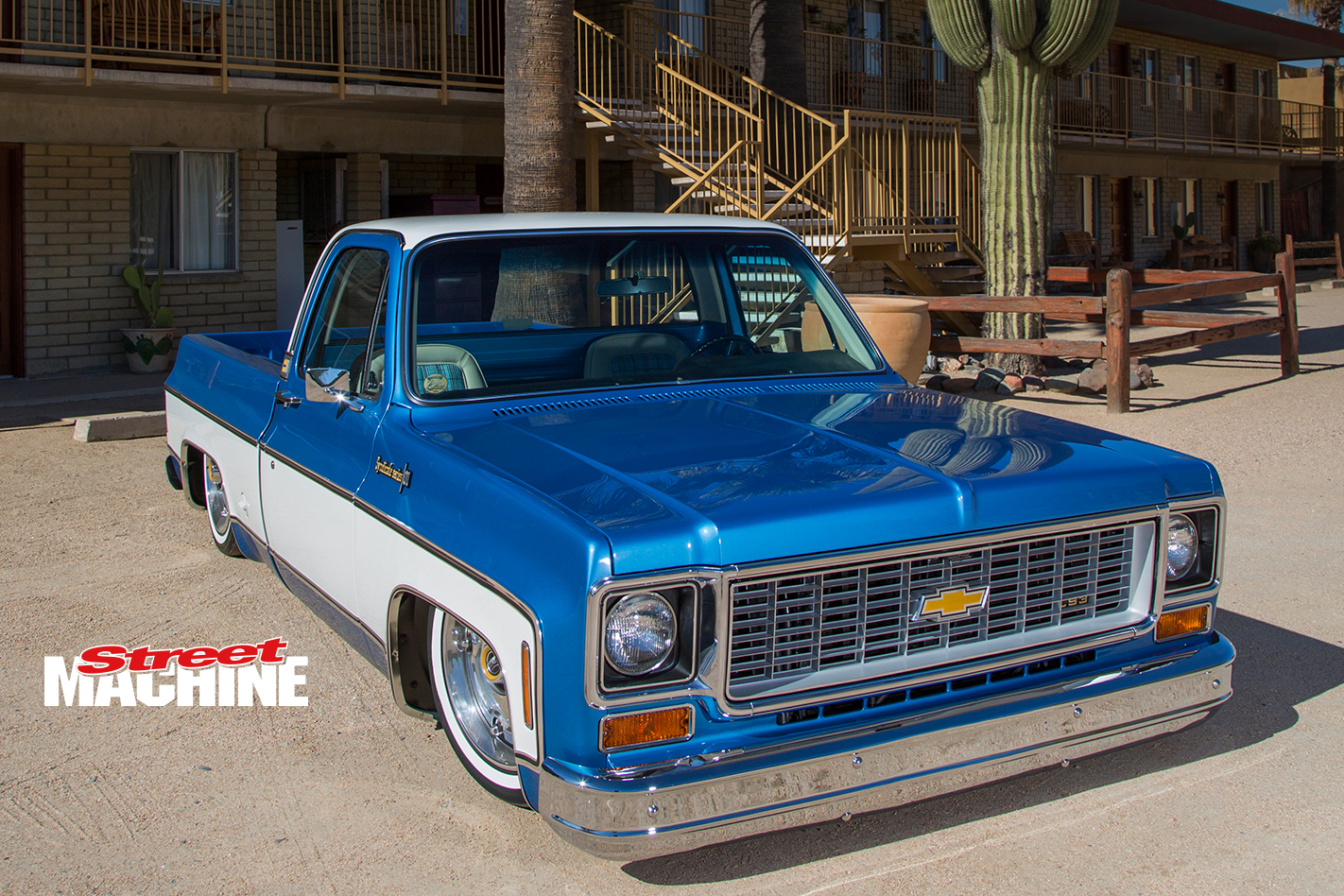 The final touches to complete the truck included filling all of the extra holes and cleaning up the factory spot welds, trying to keep it simple and clean. The bumpers were brought in two inches, and the front, where there’s usually a flattened section for the licence plate, was smoothed out for a much cleaner look. It just goes to show that when the factory got it right, all it takes is a few tweaks and attention to detail and you can end up with something that appeals to everyone. 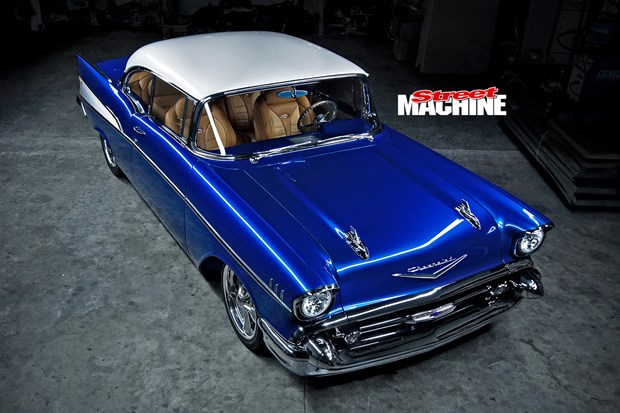 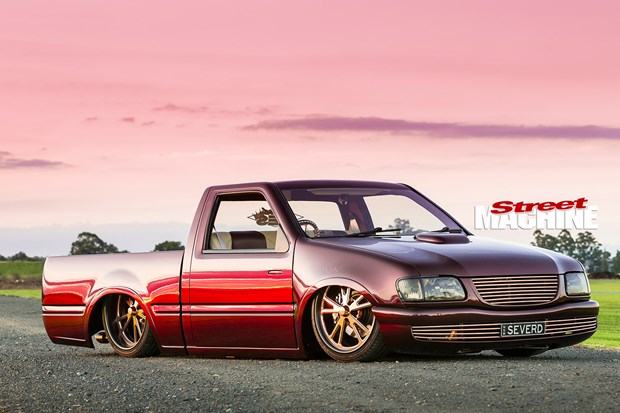 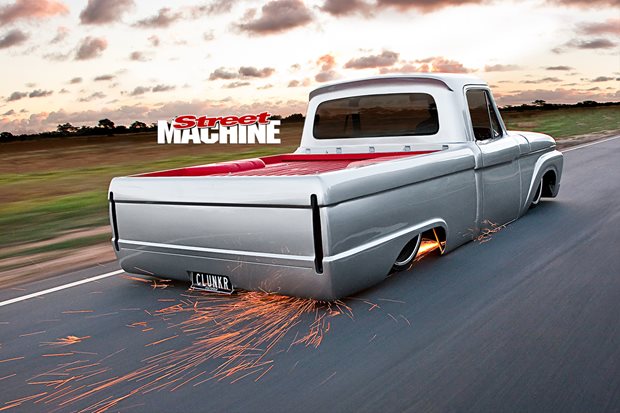