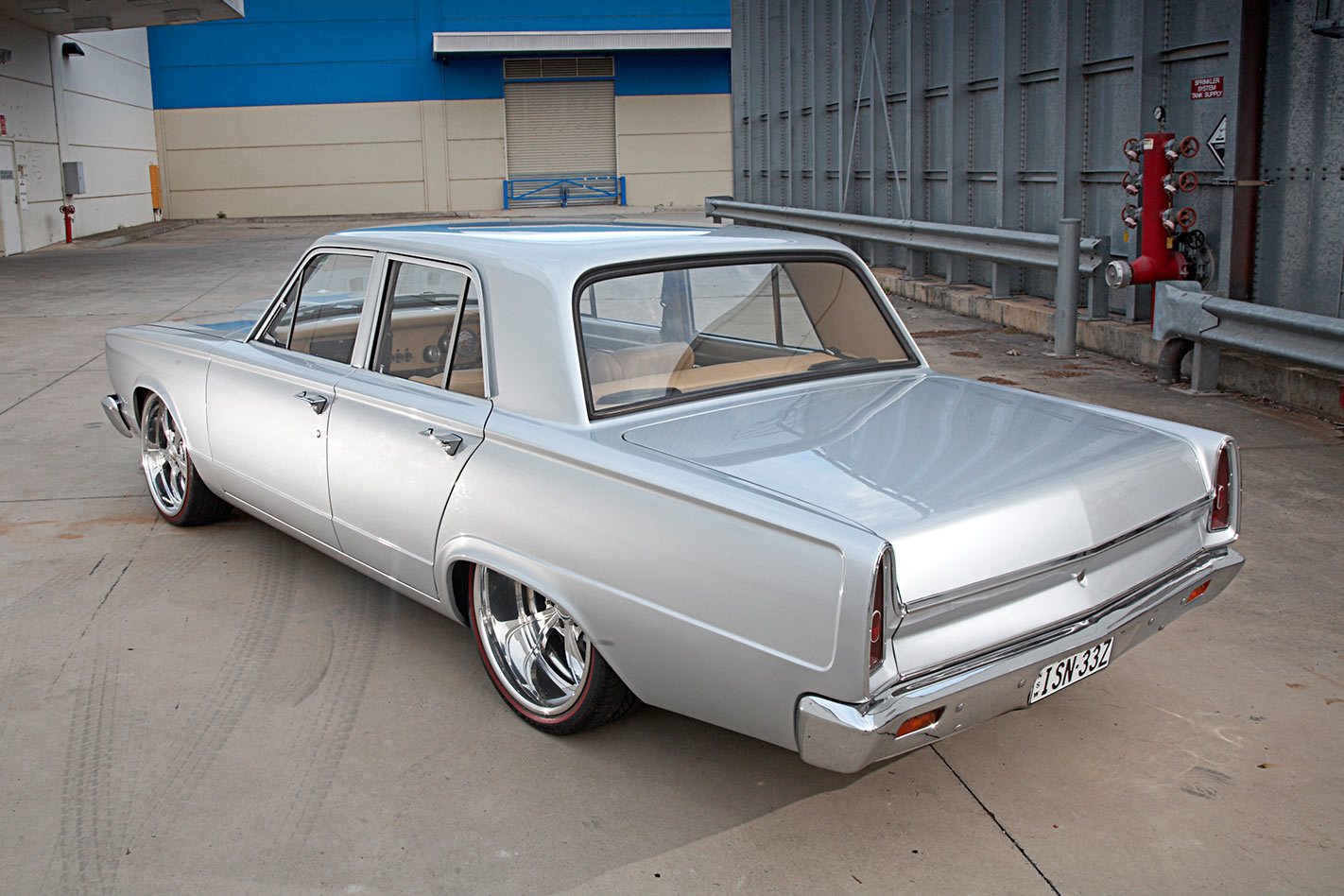 Mick Dukic worked that out for himself. In fact he did a lot of things for himself when it came to screwing together this tough and slammed VC Valiant. But what he started building isn’t what he ended up with.

“The plan was to do an Indy-headed 408 stroker,” he says. “But I wanted to drive it and not be too obnoxious or cause trouble.” 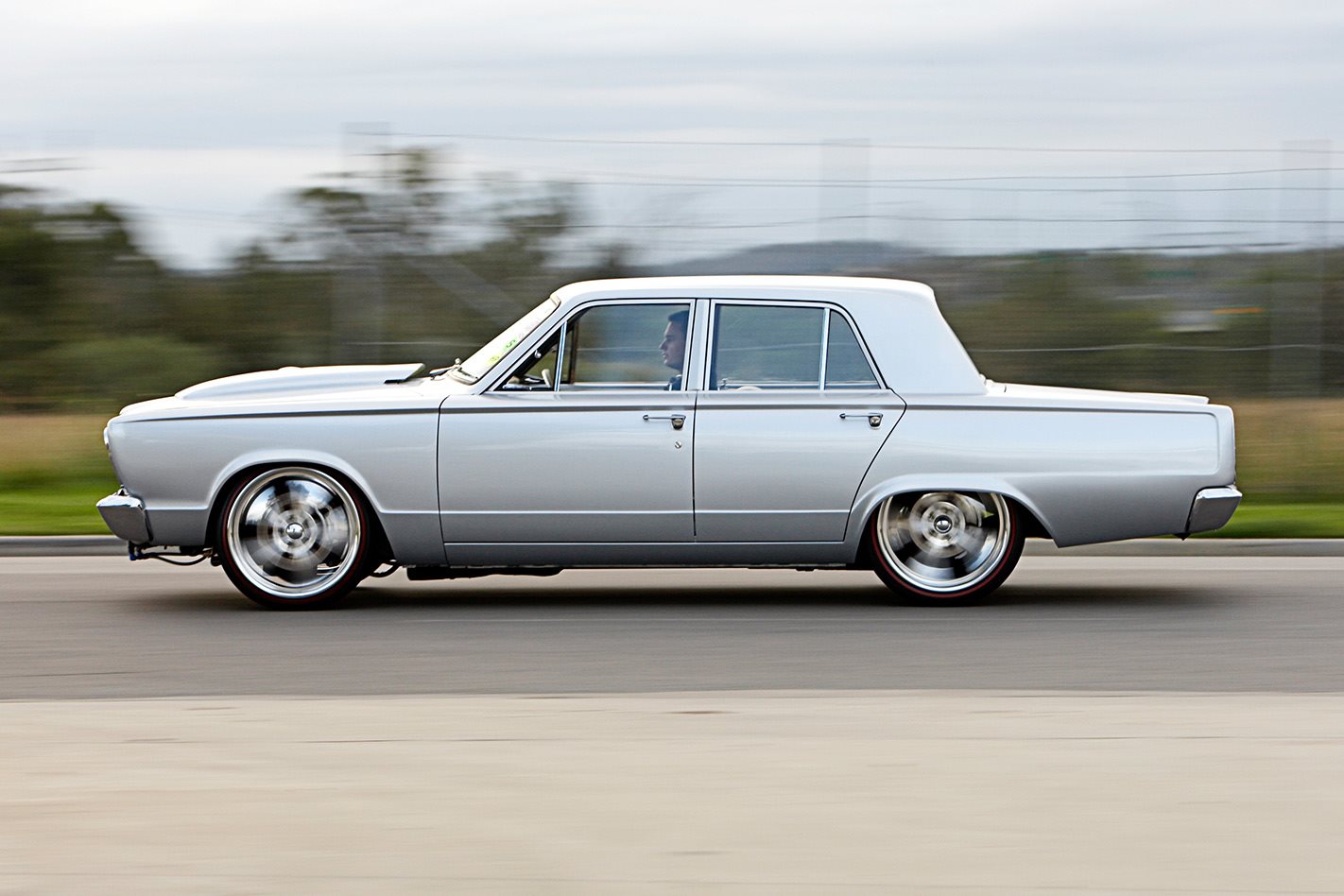 Avoiding problems with the authorities was high on Mick’s wish list and cruising around with a loud and lumpy engine running a high-stall converter didn’t seem like the way to go. The car still had to have some poke, though, and be able to cruise without suffering a heart attack if it had to stop at a traffic light or two.

So the 408-cuber was sold off and he built this 390ci single-turbo donk instead. So now he’s got the holy trifecta: is . But it wasn’t easy, nor did it happen overnight. 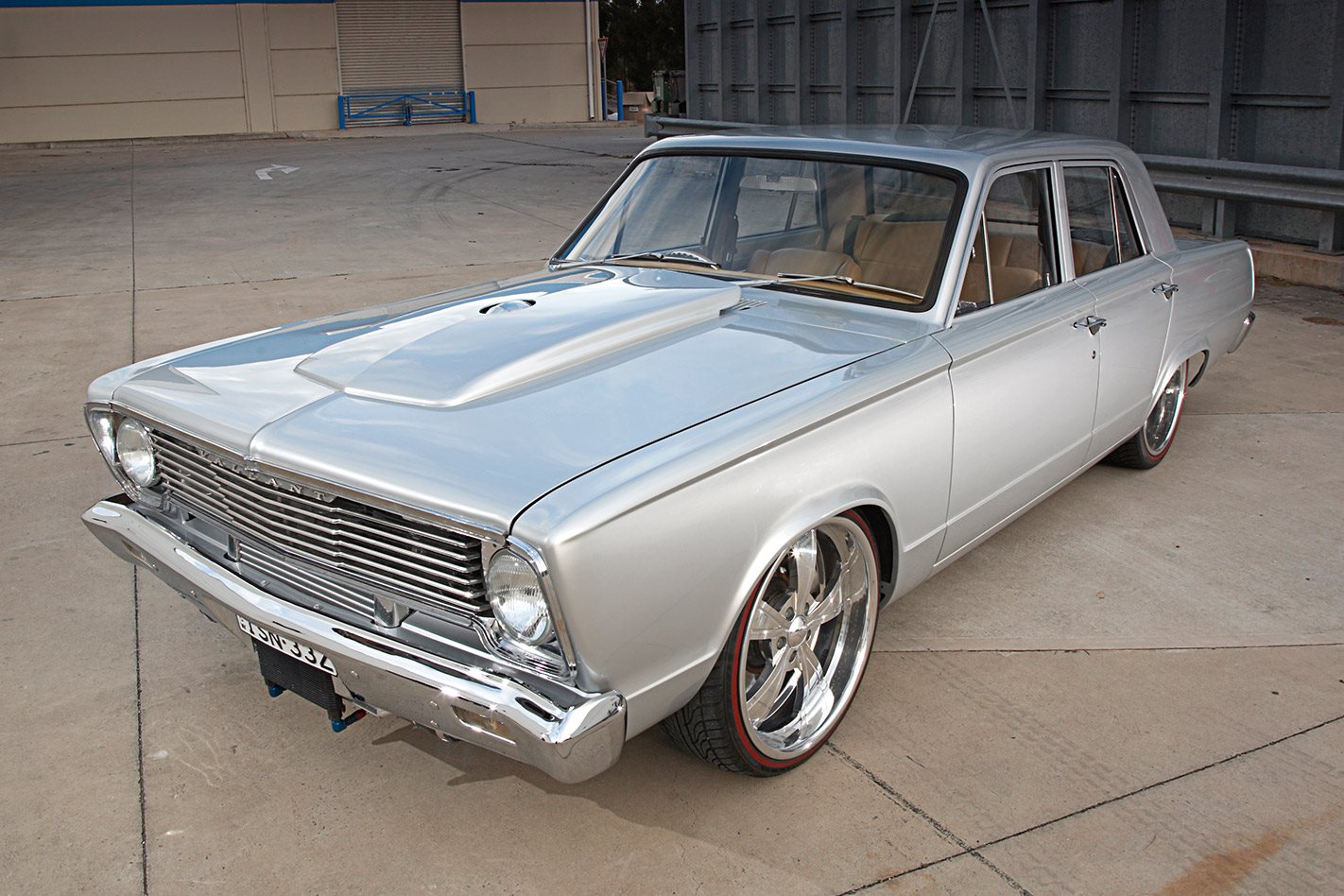 Besides the debadging exercise and removing the stainless moulds, the only major departure from stock is the VK SS cowl induction scoop that’s been grafted to the bonnet

For Mick you could say it all started with his first car, another slammed VC Valiant. That one sported a mild slant six under the bonnet and two sets of lowering blocks under the rear to drop it into the weeds. It wasn’t particularly fast but it was enough to give him the hunger for some more Mopar action. 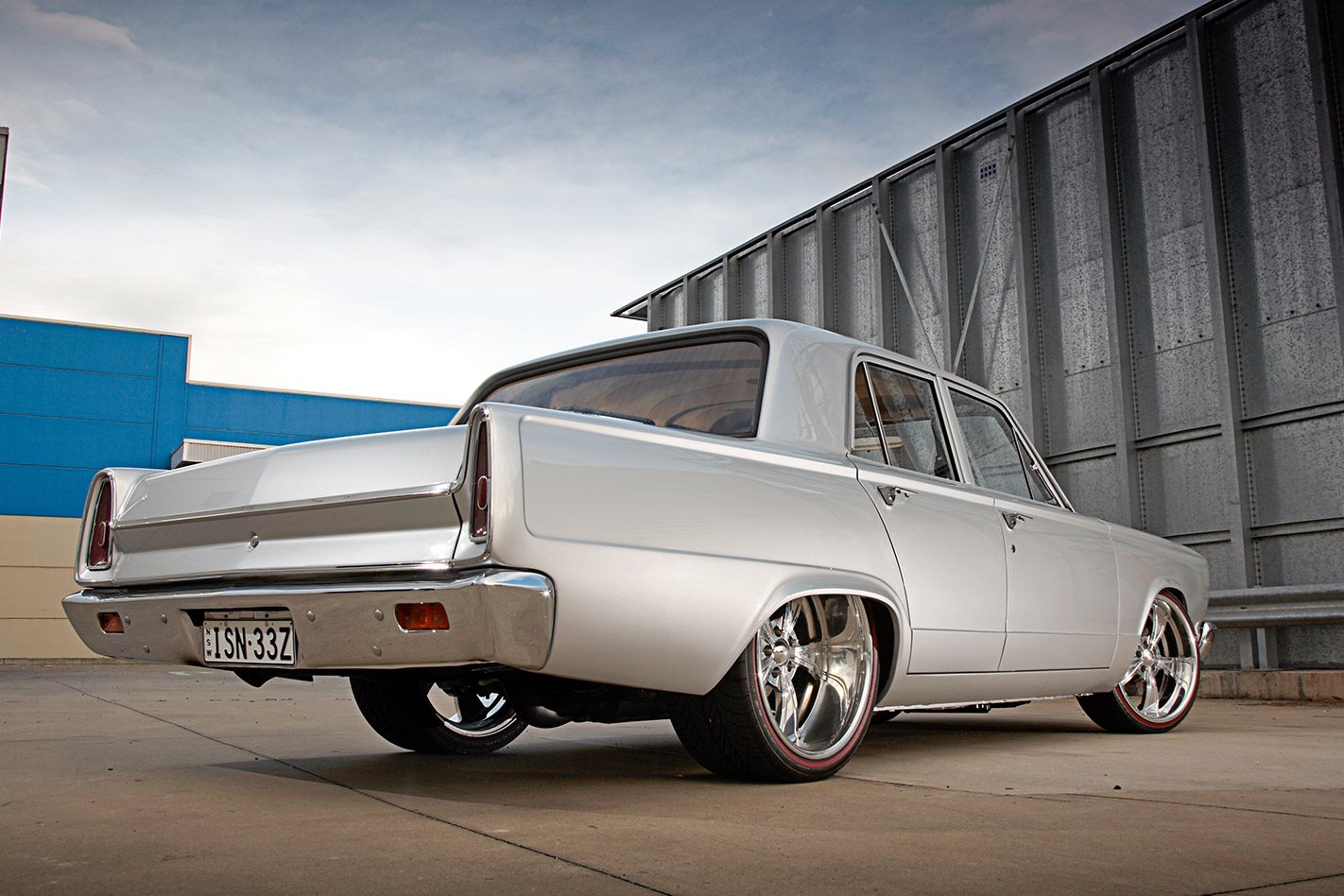 Not straight away, though; he took a diversion into the four-cylinder and turbo scene, before returning to the fold when he bought this VC sedan for $500.

“It was a basket case but it was an original VC V8. I’ve probably had it for 11 or 12 years but it sat in the corner of the garage until about four years ago.”

Bahama Blue outside, with a black interior, the early Val was missing its original 273ci V8 and Torqueflite auto and had some rust in the rear quarters. It needed a full resto if it was ever going to see the road again but had to wait those eight years until Mick found time for it. 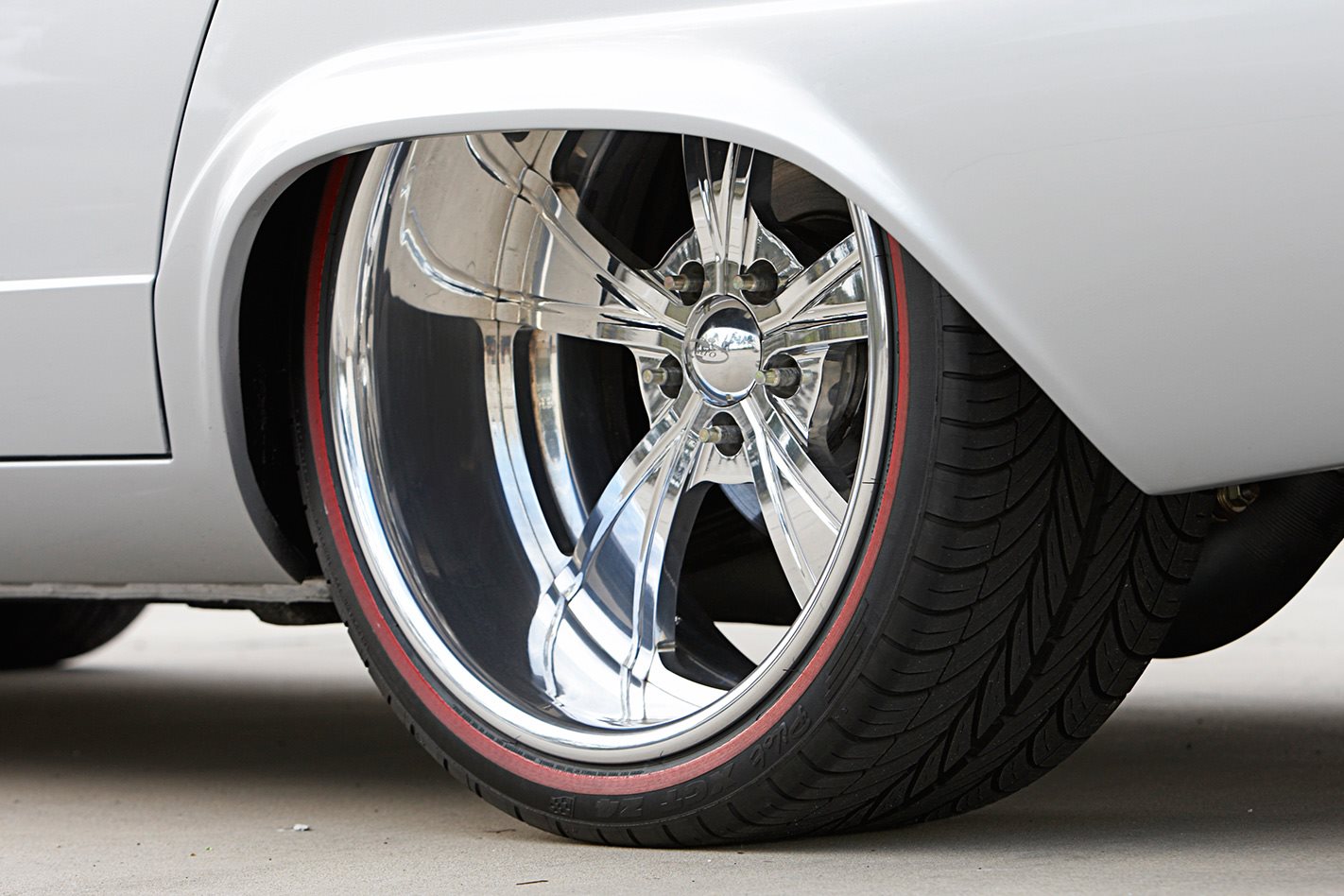 Fitting the 20in Intro wheels was easier than expected. With mini-tubs and relocated springs in the rear, the 10in-wide rims fill the quarters nicely. The 81/2in front rollers only needed the guard lips rolled for clearance

“I was helping everyone else build their cars and had no time to do my own,” he says. “When I turned 30 I realised that if I didn’t do it now, it’d never get done.”

An aircraft mechanic, Mick’s pretty handy with the tools and didn’t need to farm out much of the build, but he did get a hand from good mate Anton Polkamp to do the rusty rear quarters. 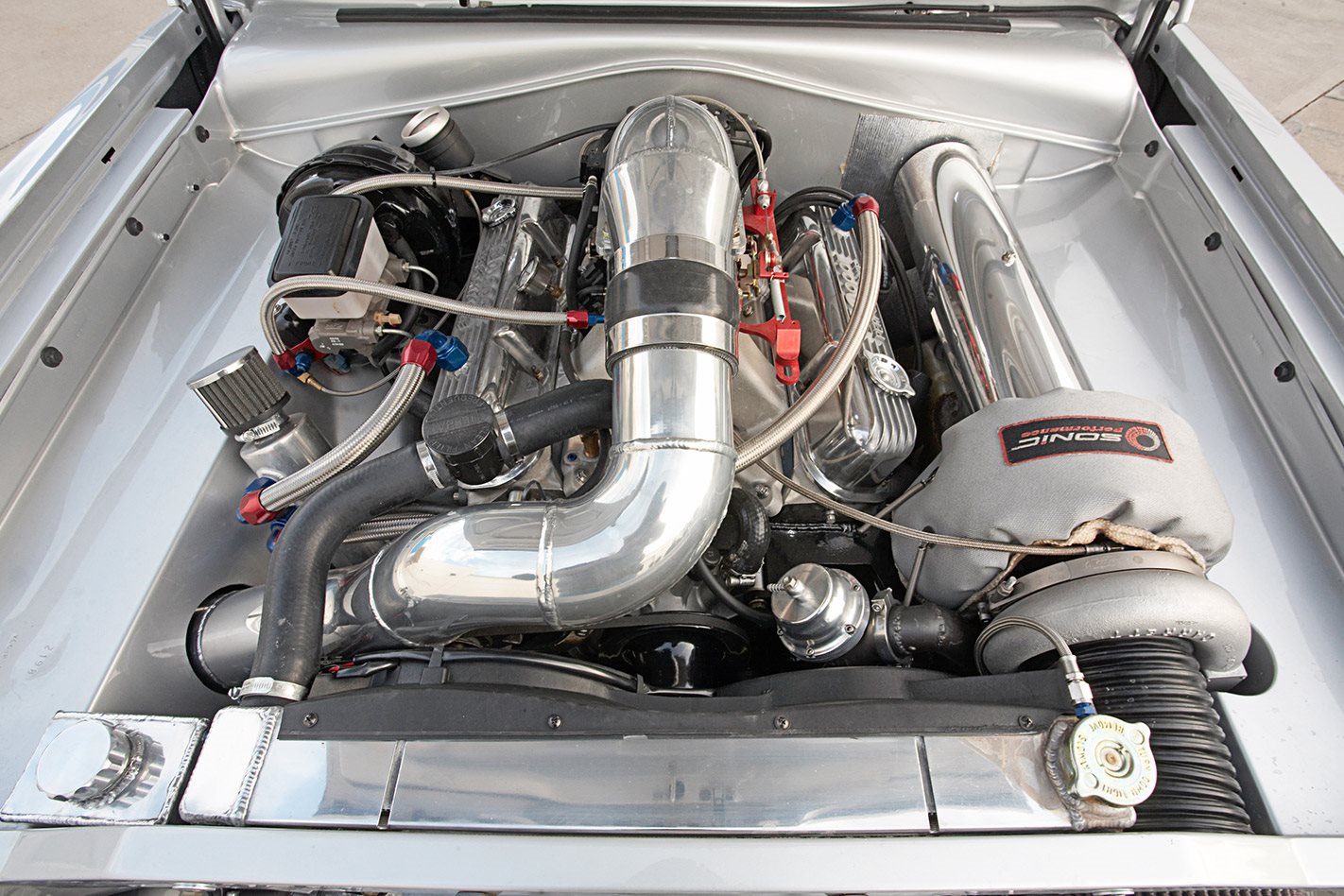 Mick raised and centred the small-block stroker in the engine bay, which gave a little extra room for the Garrett turbo but the inner guard still needed notching. With 390 cubes and 16psi boost there’s 555rwhp on tap, and more to come

While the tools were out, he decided to get creative by mini-tubbing the rear, deleting the fuel filler and body moulds, and then welding in some chassis connectors, a custom radiator support and a flat firewall. Other mods included a new trans and driveshaft tunnel, and some gas struts to eliminate the awful bonnet springs that are the bane of early Valiants.

Once the body was sorted, it was off to a mate’s shop — Twins Panel & Paint in Wetherill Park, Sydney — for a coat of Mercury Silver that Mick applied in the shop’s booth. Is there anything this guy can’t do? 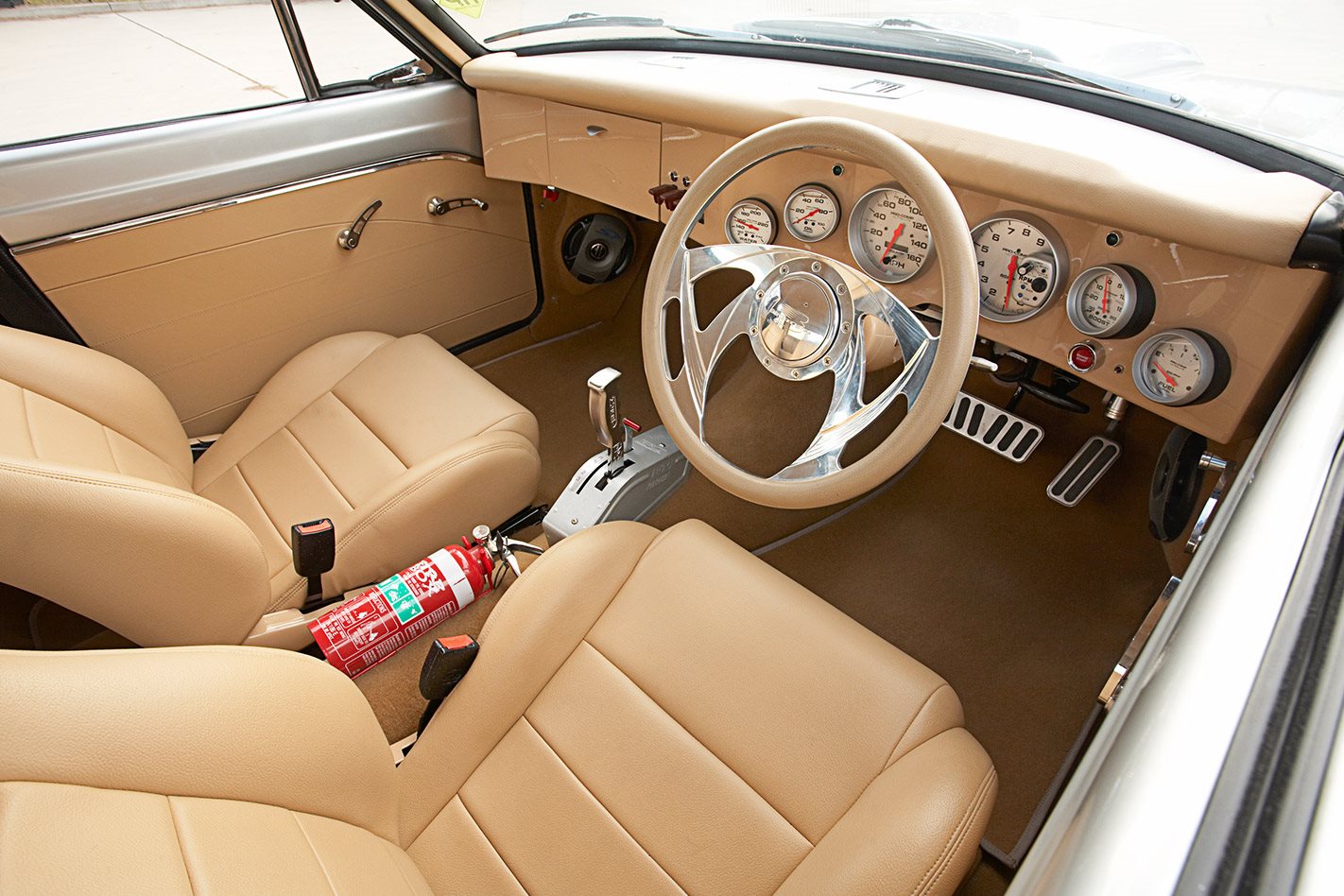 After testing a swag of seats, Mick found Toyota Corolla pews fitted best. The rear bench was reshaped for comfort and the whole lot was trimmed in tan leather

As mentioned, the original plan was for a Chrysler 360 stroked out to 408 cubes but he wanted a fully engineered car and says 390 cubes was as far as he could go with the turbo and remain 100 per cent legal. Using a four-inch Eagle crank and H-beam rods to stretch the little 318 out to something approaching big-block capacity, he topped the small-block off with Edelbrock heads and a Mopar M1 intake.

Up top he initially went with a blow-through carb from a local supplier who was supposed to be good with such things but the carby just couldn’t deliver. Frustrated, Mick turned to the internet to see what the Americans were using. That’s where he discovered a guy by the name of Brent Davis who seemed to be doing good work. 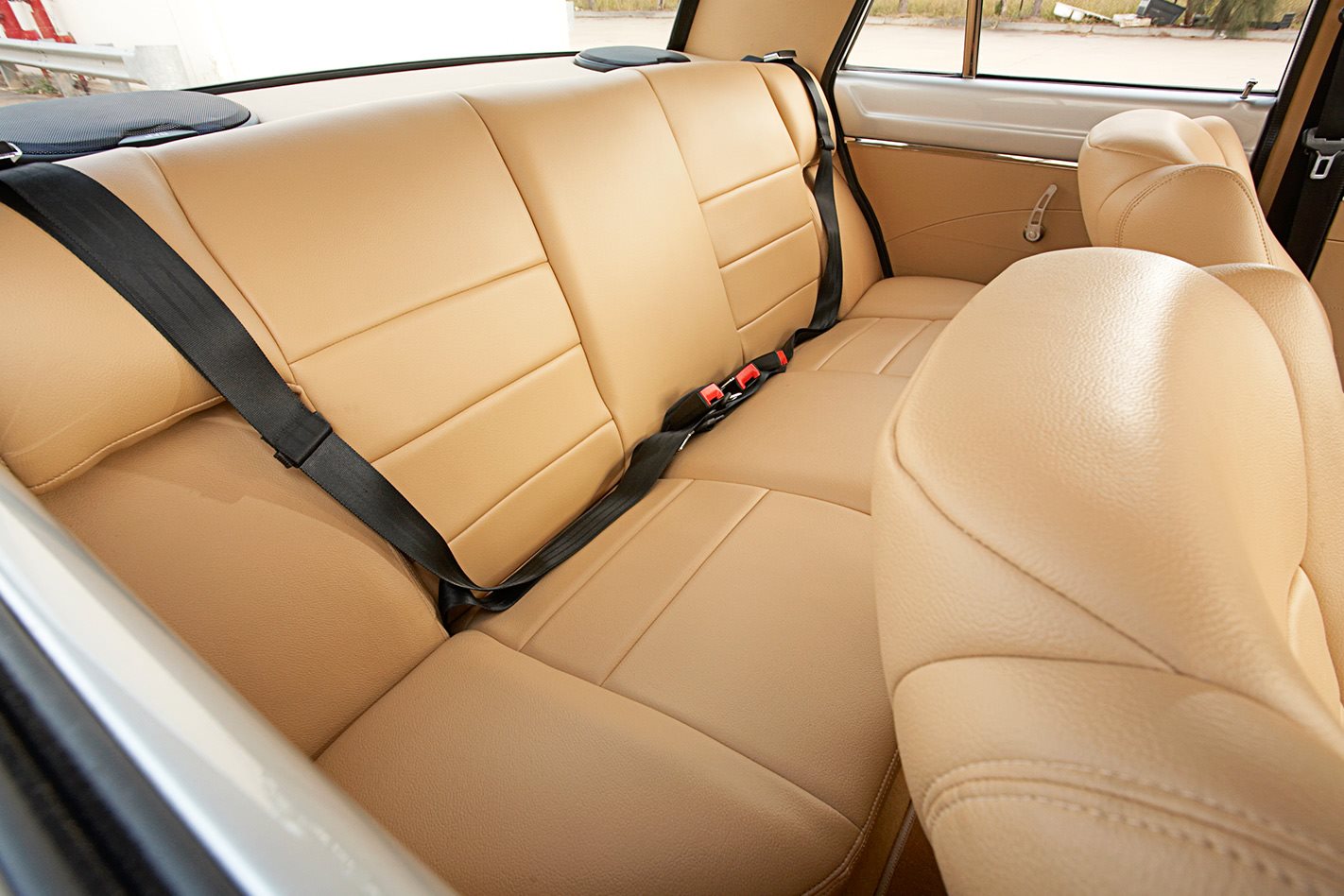 “He’s just a backyarder,” he says, “but we bolted the carb on and it was awesome right from the get-go.”

Mick made the turbo headers himself and used a Garrett turbo he had sitting on the shelf from a Piper Chieftain — as you do when you’re an aircraft mechanic. He says it’s GT45 sized but the relatively small compressor and large turbine combination doesn’t really lend itself to a street car — “It’s a bit laggy” — so he’s prepping a more suitable GT42 to replace it.

Even so, the aircraft turbo makes plenty of power. With the GReddy boost controller set to 16psi, the Val punched out 555rwhp with almost no tuning. There’s lot more to be had once they start leaning off the rich air/fuel ratios and throw some more timing at it but Mick’s pretty happy with how it goes now. 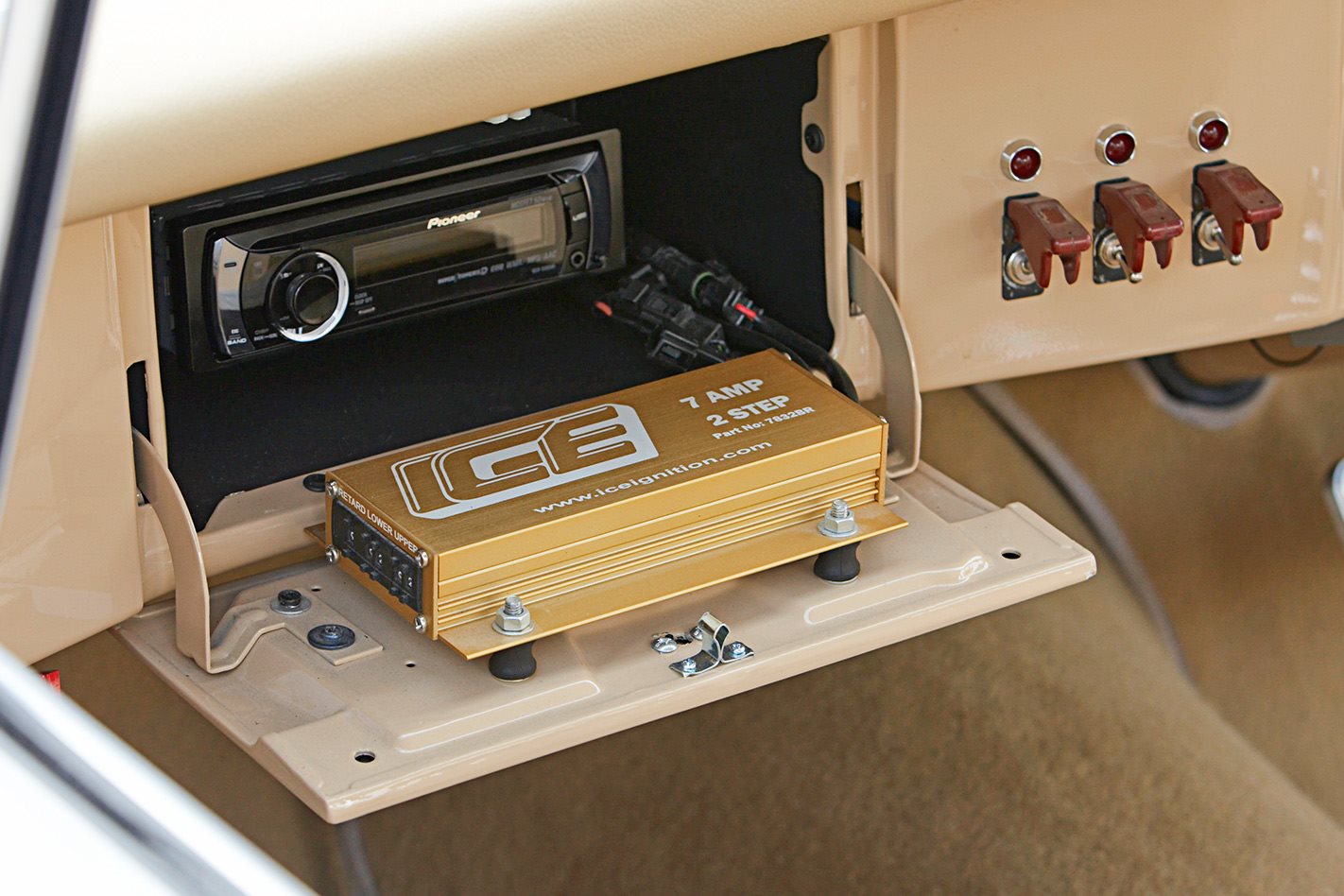 “It’s ridiculous,” he laughs. “Even on 12psi at Powercruise it smoked the tyres at 120km/h with four people in the car.”

While he does intend to run the old girl down the quarter-mile in the future, he reckons he’ll probably get kicked out for not having a ’cage and has no plans to fit one — he enjoys cruising with his mates too much.

“As it sits now, it’s not overboard — it’s still practical and it’s all engineered,” he says. 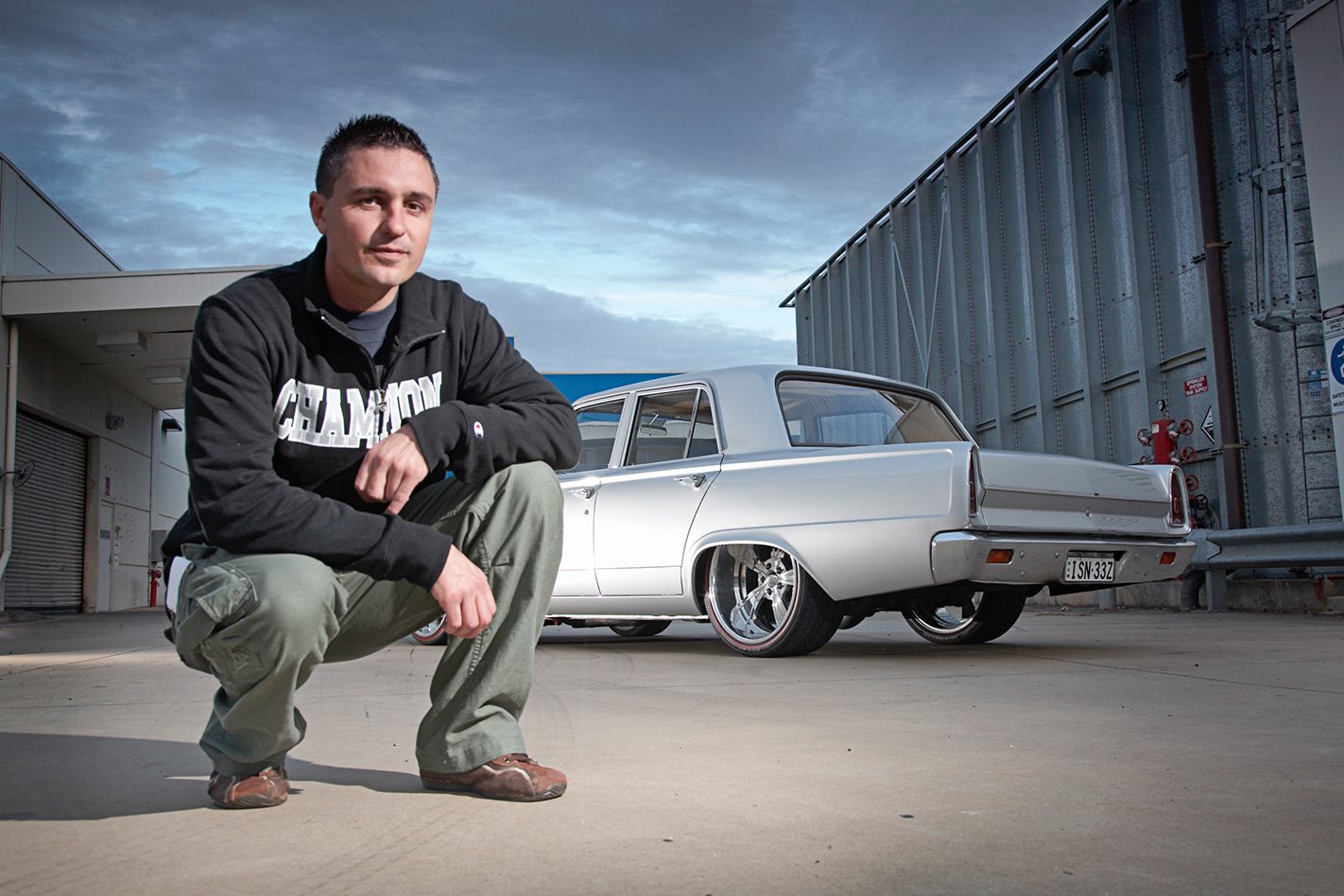 But he’d still like to run just one decent pass.

“In an ideal situation the Moroso calculator says 9.80, but realistically it’ll probably run a 10.40 or something.

“I built 85 to 90 per cent of the car myself. I like driving it once or twice a week and sometimes to work. It’s just different to what other people have done. I like that.”