WELCOME to David Bennett’s incredible travelling circus. Be amazed, ladies and gentlemen, as this brave Melburnian climbs the high wire – without a safety net – and strikes a balance between far-out and factory. Give him an enthusiastic round of applause as his sleight of hand actually makes you believe something quite radical is actually near-standard. Gasp in shock as he taunts, teases and tames a wild 454 big-block. 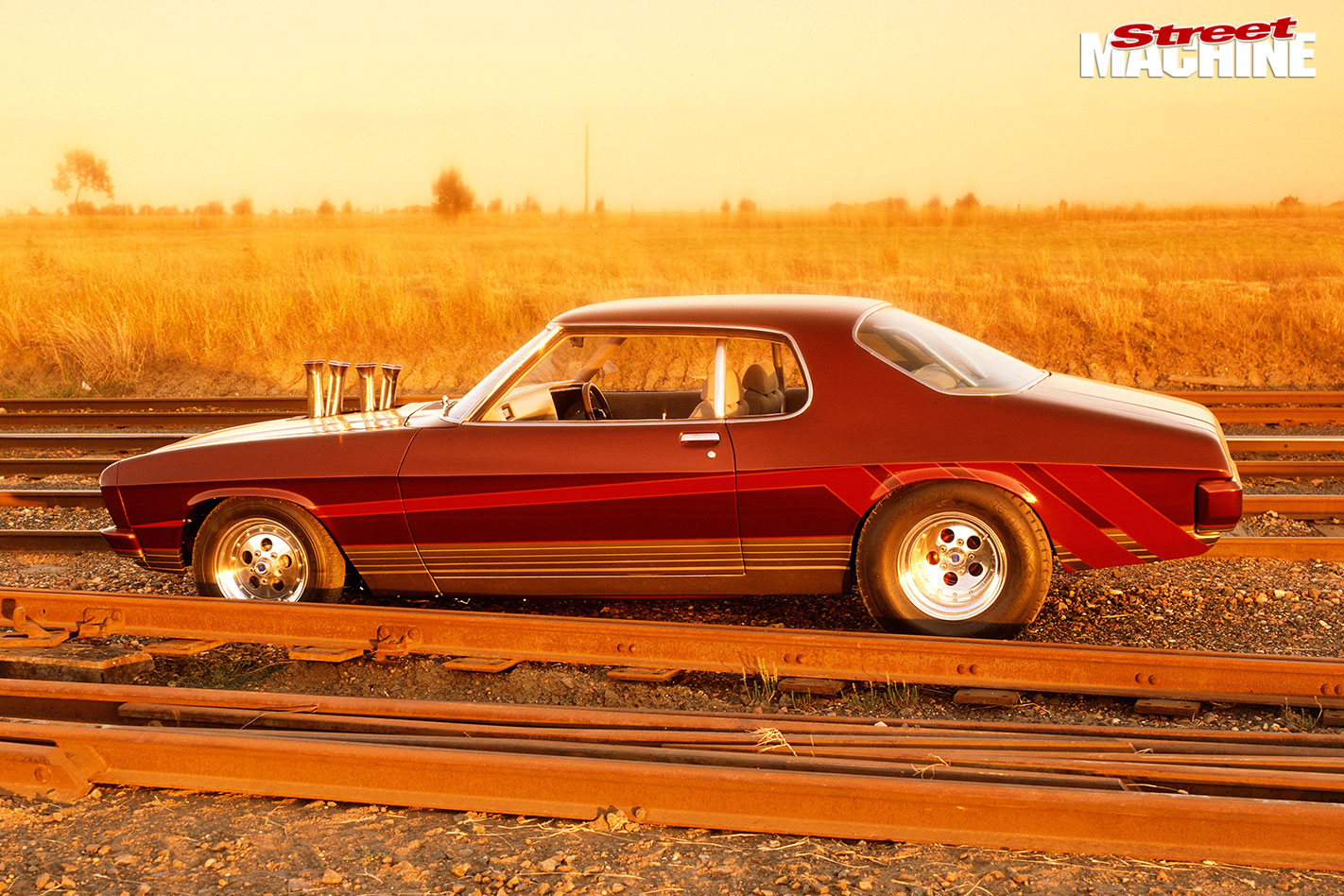 Ringmaster David certainly has one of the most innovative acts in town. A collection of individual sideshows that, in the one place at the one time, forms a breathtaking departure from the hi-tech, electronically controlled mobile video machines of today. His tubbed, big-blocked and pretty-painted tudor is both outrageous and subtle; over the top but within the confines of good taste.

It isn’t the first time panelbeater-by-trade Dave’s cracked the whip over a new recruit. In fact, this very car is now making its second star-billing appearance. Some 10 years ago it was plucked from the scrapheap and taken on a rags-to-riches ride. A front-end write-off, the big Q underwent an extensive nose job. One rammed 396 block, four guard flares and two new door skins later, Dave had the best act in town.

In the ensuing period, this hunky Holden saw day-to-day duty ferrying owner and guests in and around Melbourne. After a ’55 Chev attraction fell out of favour, Dave returned to his former love. The roar of the crowd and the smell of the crowd was a powerful memory indeed. The car was plonked in the corner of Dave’s panel shop and stripped. Then acid dipped – chassis, panels, the lot. All impurities in the metal surface disappeared. 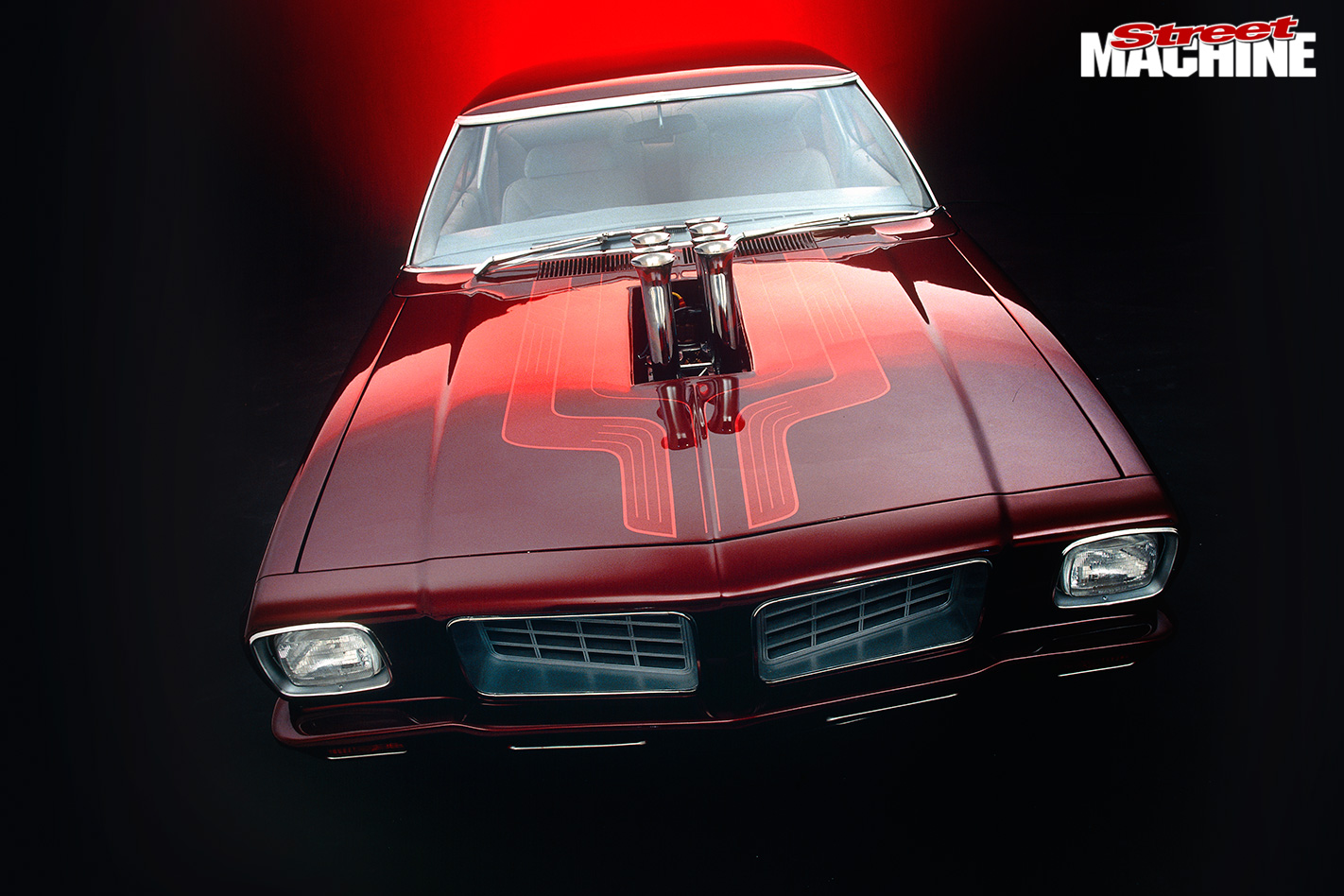 Square LH Torrie headlights shoulder a Statesman grille while underneath the beast, the chassis bracing and suspension has all been chromed

The dipping company recoated the bare metal to prevent rust. Dave made a cradle to secure the car in a horizontal position, exposing the underside. Those body chassis seams beneath ankle level (those spots nobody bar show judges ever sees) were welded and tidied up. Wheel tubs were part of the coupe’s new costume, a real one-off uniform. The rear end was the point at which Dave’s individual touch really started to show.

Wheel tubs, yes. Full or half chassis, no. If you take a peek underneath you’d see that Dave simply narrowed the existing factory-produced chassis four inches on either side to make room. “I wanted it to be different to everyone else’s,” he says. “It was twice as hard doing it this way; heaps harder. But the others all look square and very plain, while mine looks almost original.” 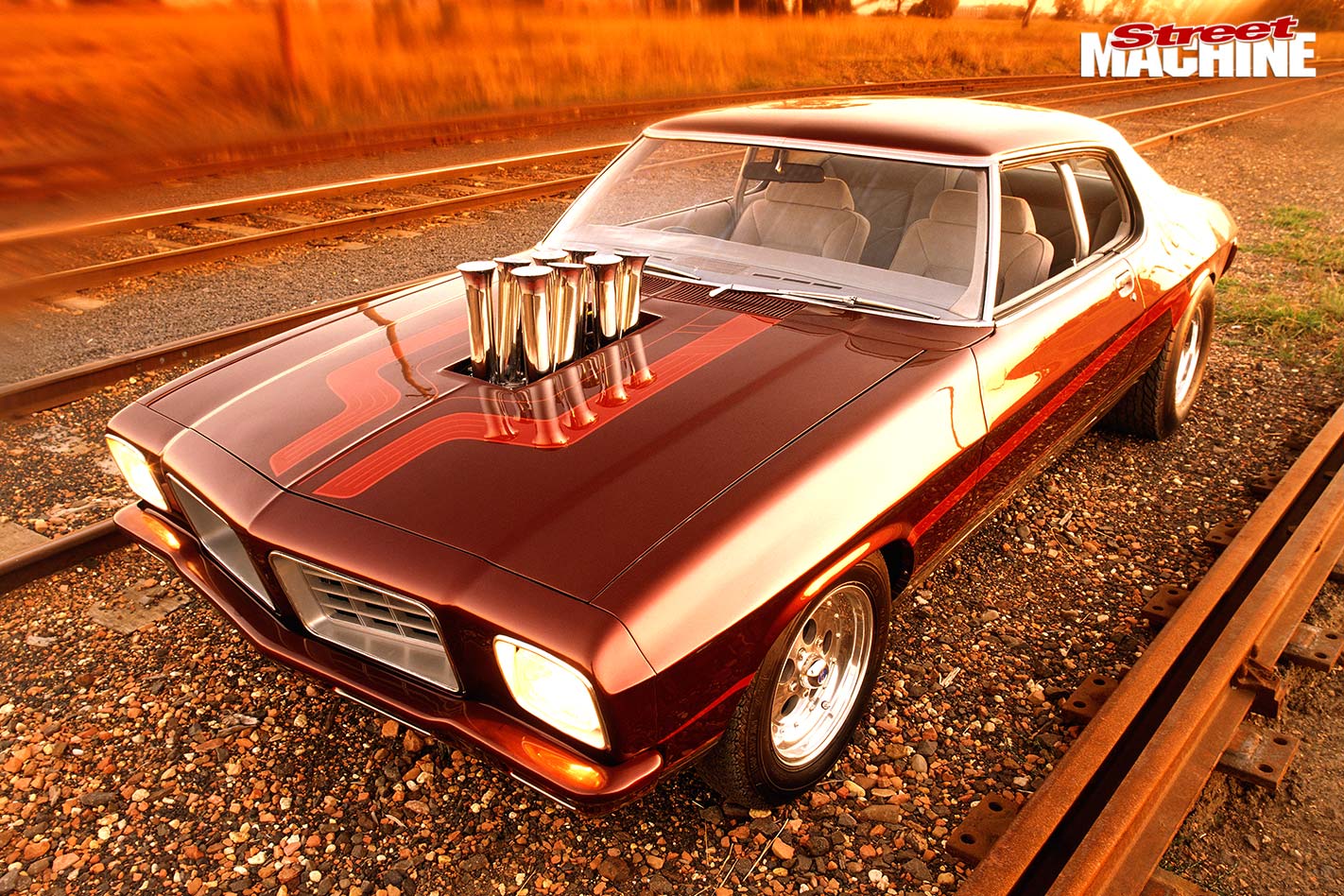 The floorpan came in for treatment, too. The original fuel tank was removed and replaced with a steel plate, contoured around the chassis rails. It makes the tail-end a treat to inspect. Detail work abounds. The diff is painted. The suspension’s chromed, as are the tailshaft, exhaust and steering systems, sump and front wishbones. Anything small and unbolted went to the platers – the rest was painted. And don’t forget the braided lines.

John Taverna shortened the nine-inch (4.88 ratio) diff housing and axles. At either end are Ford drums, supported in their stopping effort by HQ discs and a PBR power booster from a Gemini! Believe it or not, Dave reckons the combination works beautifully. Lloyd Moss Spring Works ran up a special set of coils, the rears being only 2.5 inches in diameter to fit the confined space. 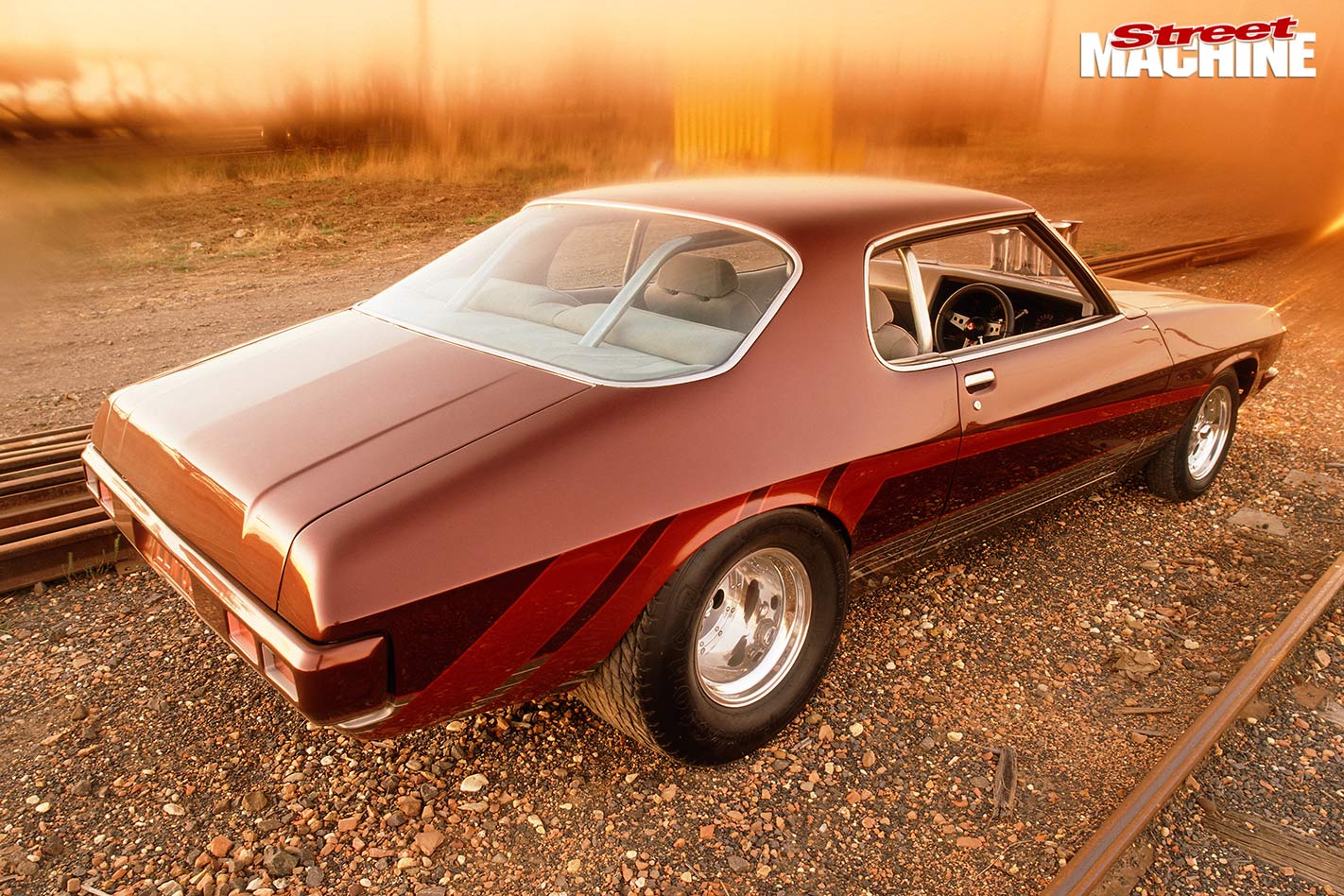 Dave made the links for the rear end himself, fabricating ladder bars in the process. Holden HQ shocks help keep Dave’s chiropractic bills to a minimum. Even the toughest of the tough wear comfortable shoes and that’s why 15x14 rear and 15x5 front Dragways are nestled inside Michelin/Firestone work boots.

The process of individualisation continued up front, where the firewall was welded up to look clean. Square-shaped LH Torana headlights were on the menu too: Dave reckons the cutting, shutting and grinding was worth it. A Statesman grille was inserted, while the bumper bars were narrowed to bring them closer, “so they look as though they’re part of the car”.

An assortment of parts and pieces was still lying around after the first build. Like the couple of new doors and front guards sitting in the lolly jar that bolted up nice’n’easy. Covering the body is a mixture of graphics, deep Dulon acrylic Monza Red and two-pack Red Pearl. Undercoat was a Dulux factory load of Hi-Fill primer, with the total number of clear finishes (adding base coat and graphic protective coats together) a whopping 29 coats! 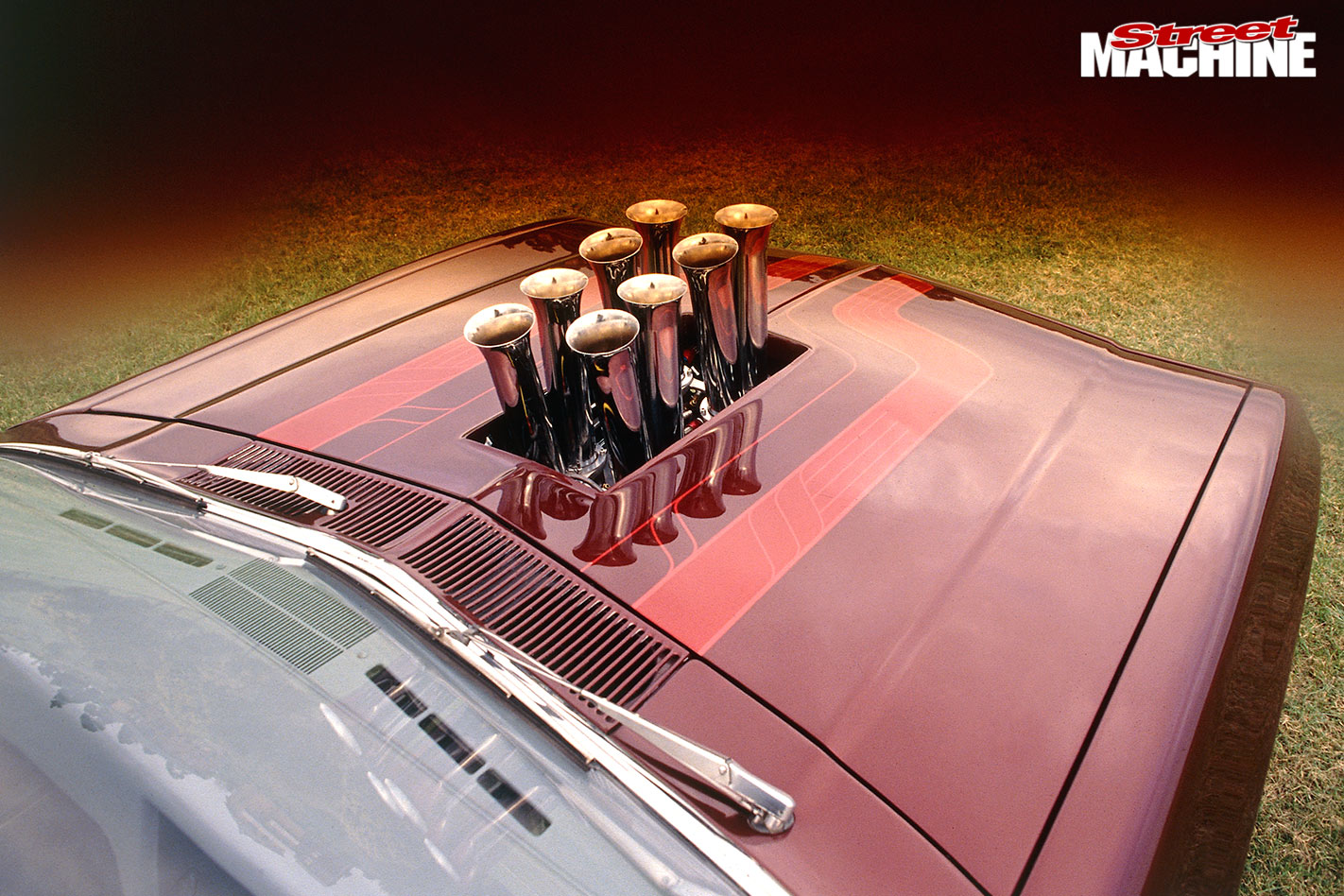 Those graphics are striking, but not loud. Clever use of the colour chart has created a scheme that should stand the test of time. Dave accepts that he’s one of the few to grit his teeth and run with a multi-shaded exterior. “People aren’t very adventurous,” he reasons. His little venture into the world of modern art took two weeks, from primer to polish.

It was time to break out the chair and whip. Dave sold the Chev minus the engine he’d built a few years back. It’s a 454 big-block, all right, with fuel injection. No bones about it, Dave likes power. He’s had plenty of time to get injection working just right and now, with it firing clean and strong, the difference in throttle response is enormous. 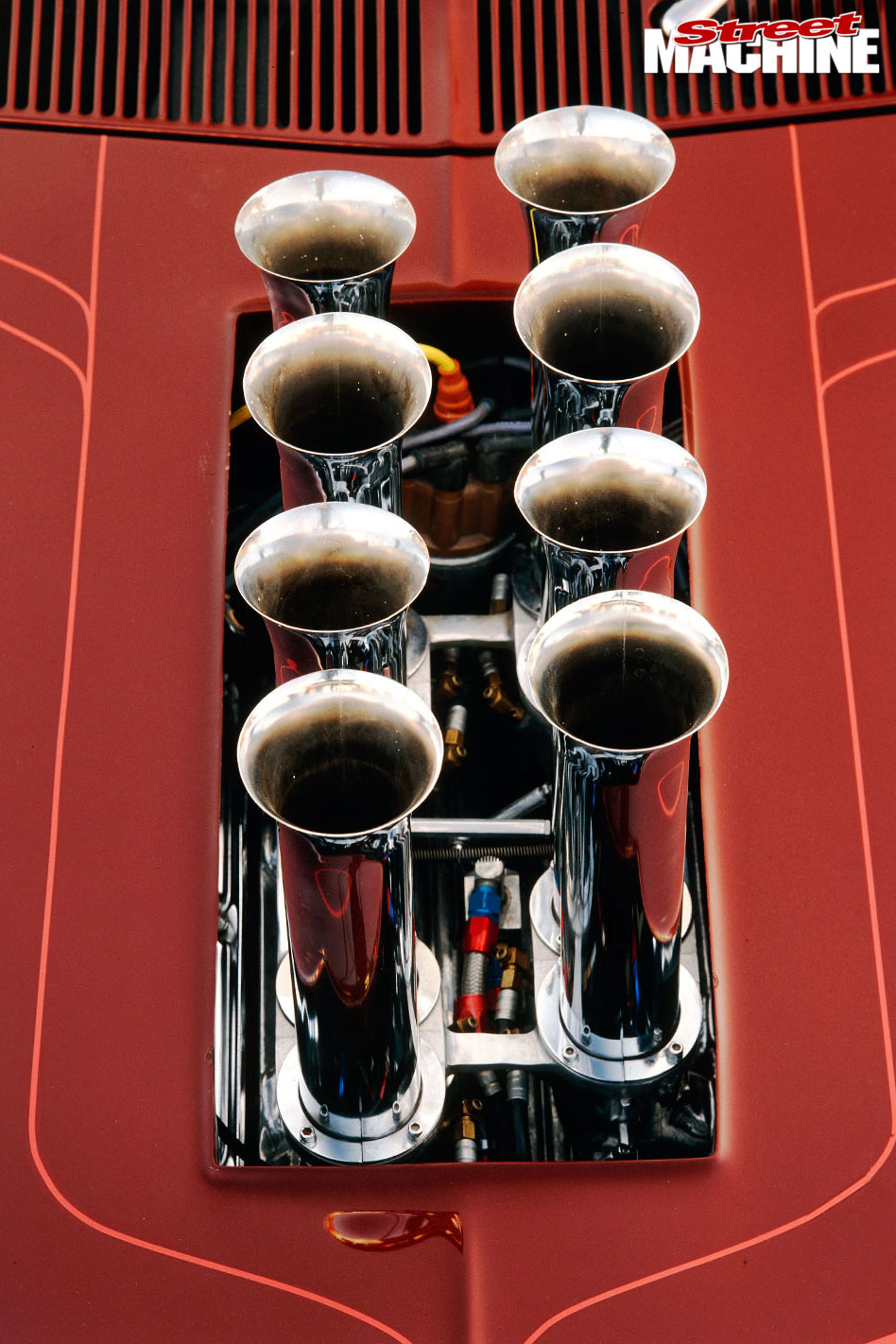 But to make reliable power, you’ve got to use quality hardware.

The steel crank has been cross-drilled for improved oil flow and bolted to Chev LS7 rods. TRW rings and 12.5:1 pistons put the squeeze on the combustion mixture. It enters the picture through heavily reworked heads. They started life as small-porters but were so comprehensively reamed out and bench tested that they now flow better than large-port heads.

Intake and exhaust valve sizes are 2.3 and 1.88 inches respectively. The spring in their movement is courtesy of Crane, while Harland Sharp rollers are real rockers … if you know what we mean. Manley pushrods get the message from Crane roller lifters which, in turn, dance to the beat set by a Crane roller cam. A B&M gear drive ensures the band doesn’t get out of time.

The injection system we mentioned is a Hillborn unit. “Injection is basically simple,” says Dave, “but you’ve got to be prepared to put up with a lot of time and hassle to get it right. You can set it up to go flat out or have it to just drive around and it won’t fuel up on you.” Speaking of fuel, this baby sucks a gallon of super grade every two miles from the Datsun 180B tank mounted behind the rear seat. 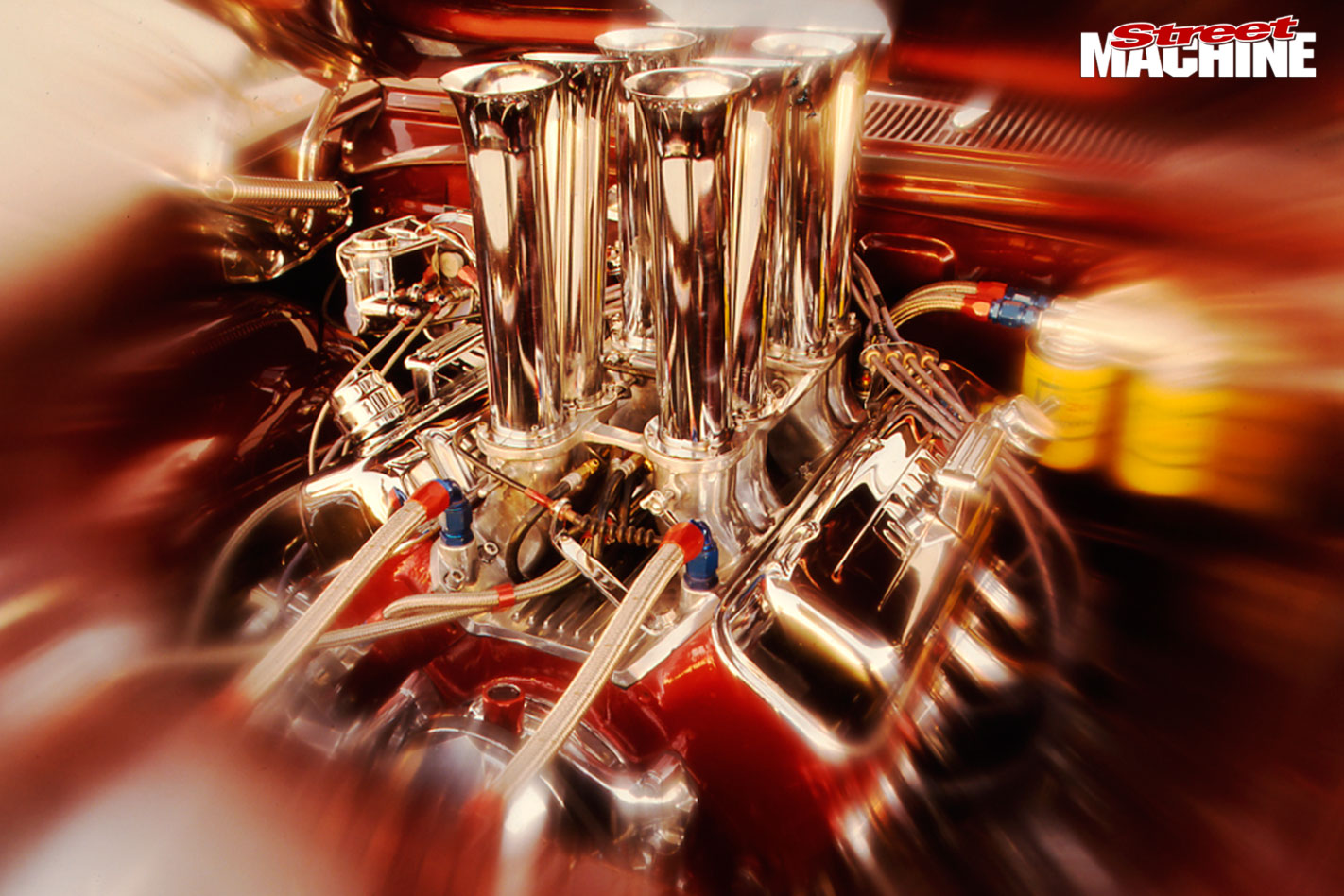 Burning that incoming charge is the responsibility of an Accel coil and distributor and extractors and Bennett-built pipes dispose of the sewage. Bumping’s fine but grinding isn’t. A Mellings high-volume oil pump wards off disaster. Steam’s a no-no too, which is why there’s a 350-spec heavy-duty radiator from an HQ Holden sitting in the air stream.

That’s the specs – the rebuild was even more straightforward. All it consisted of was rings, bearings and a darned good search for stressed components. None were found – Dave obviously did it right the first time. Transmitting engine power and torque is a shift-kitted, 3000rpm-stalled and Lightning Rod-shifted TH400 automatic. 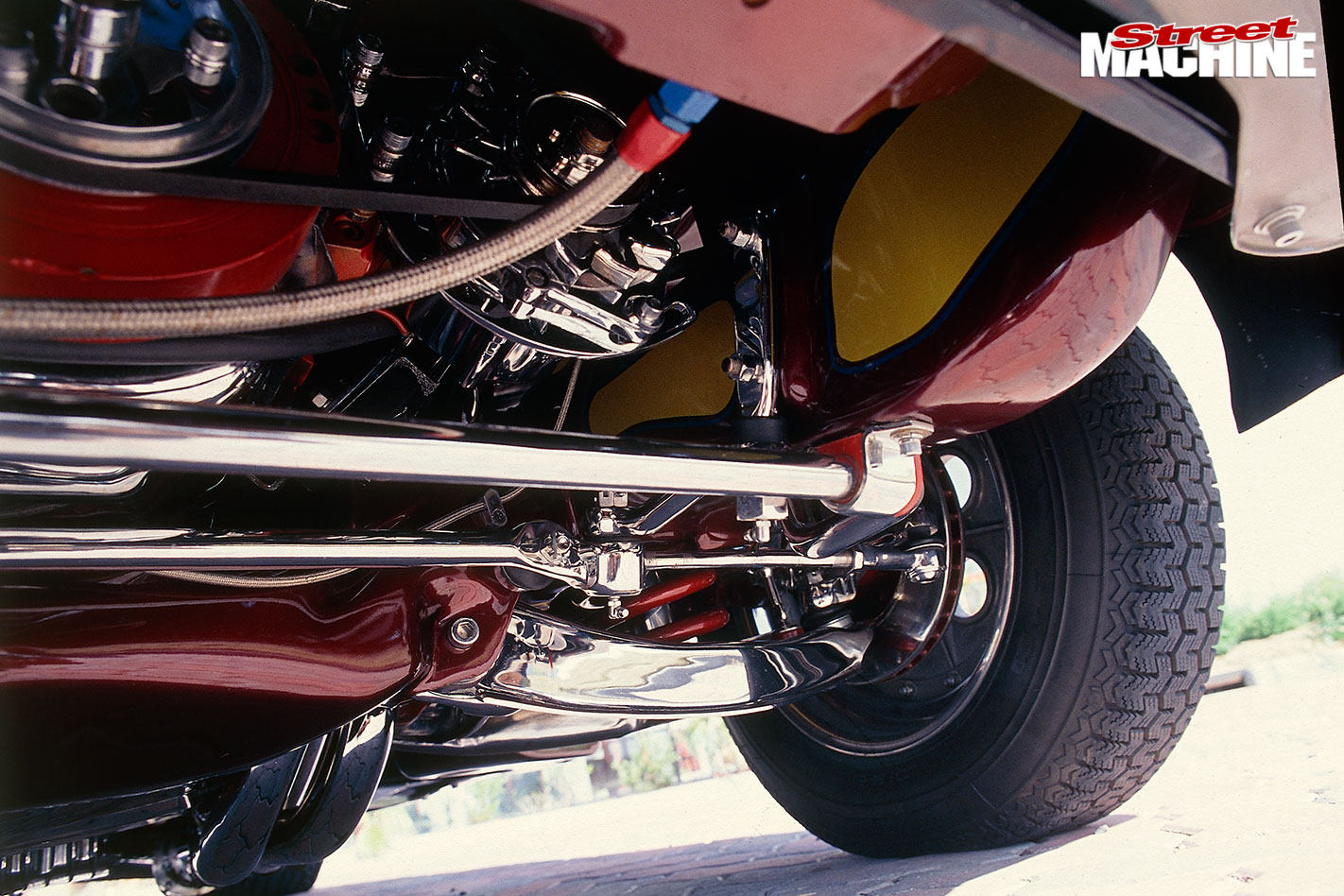 But that ain’t all. Dave took the rear seat and cut away the springs to fit the contours of the intrusive rear wheel hubs. The job’s so neat, so well executed that inside you’d have trouble telling the car was tubbed. Radical yet stock…

It’s a fine balancing act, this one, with a pedigree as long as the India Rubber Man’s arm. Not a sideshow freak – definitely not a cure for insomnia.

A circus, pure and simple… 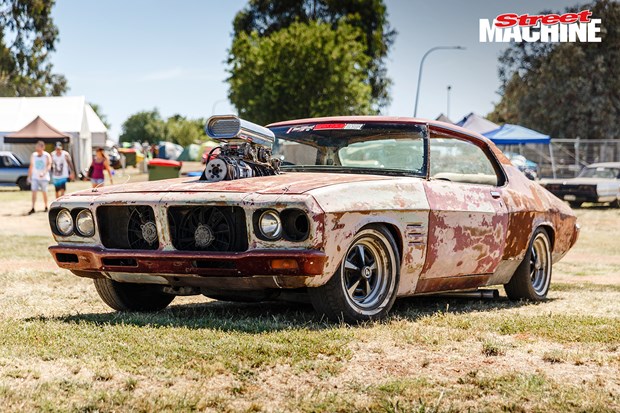 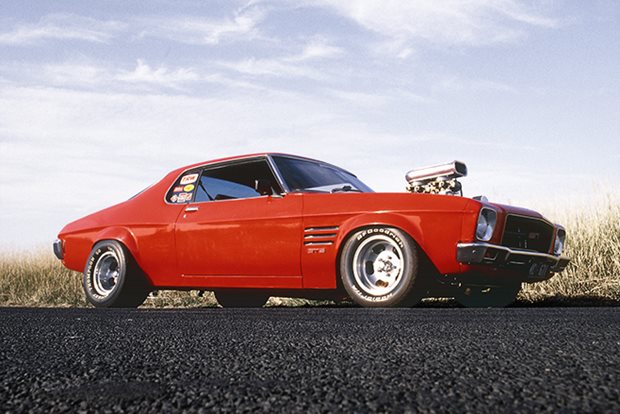 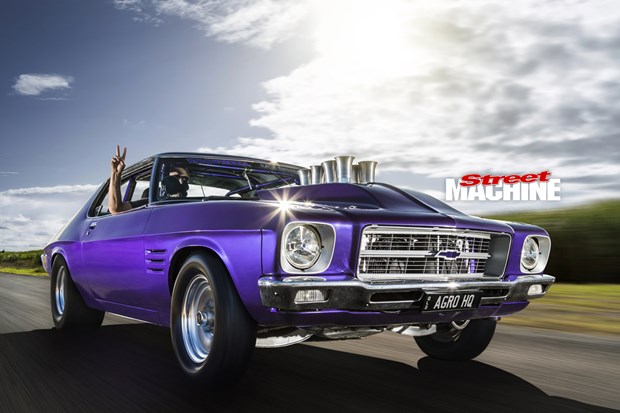