Mixing tasteful surgery with curves in all the right places and a modern Mopar heart, this 45-year-old VJ Valiant hardtop turns more heads than hotties half its age

SOUTH Australia’s George Poulson owns the beautiful VJ Valiant two-door you see here, which is somewhat ironic, as he reckons he was never a fan of Val hardtops. “I found them big, ugly and disproportionate, but now I’m a changed man!” he laughs. “I’ve owned Chargers through the years, including a 440-powered VK that ran 10s in the late 90s, and was actually on the hunt for another. But they were all overpriced and rusty, so I decided to broaden my horizons and found this.” 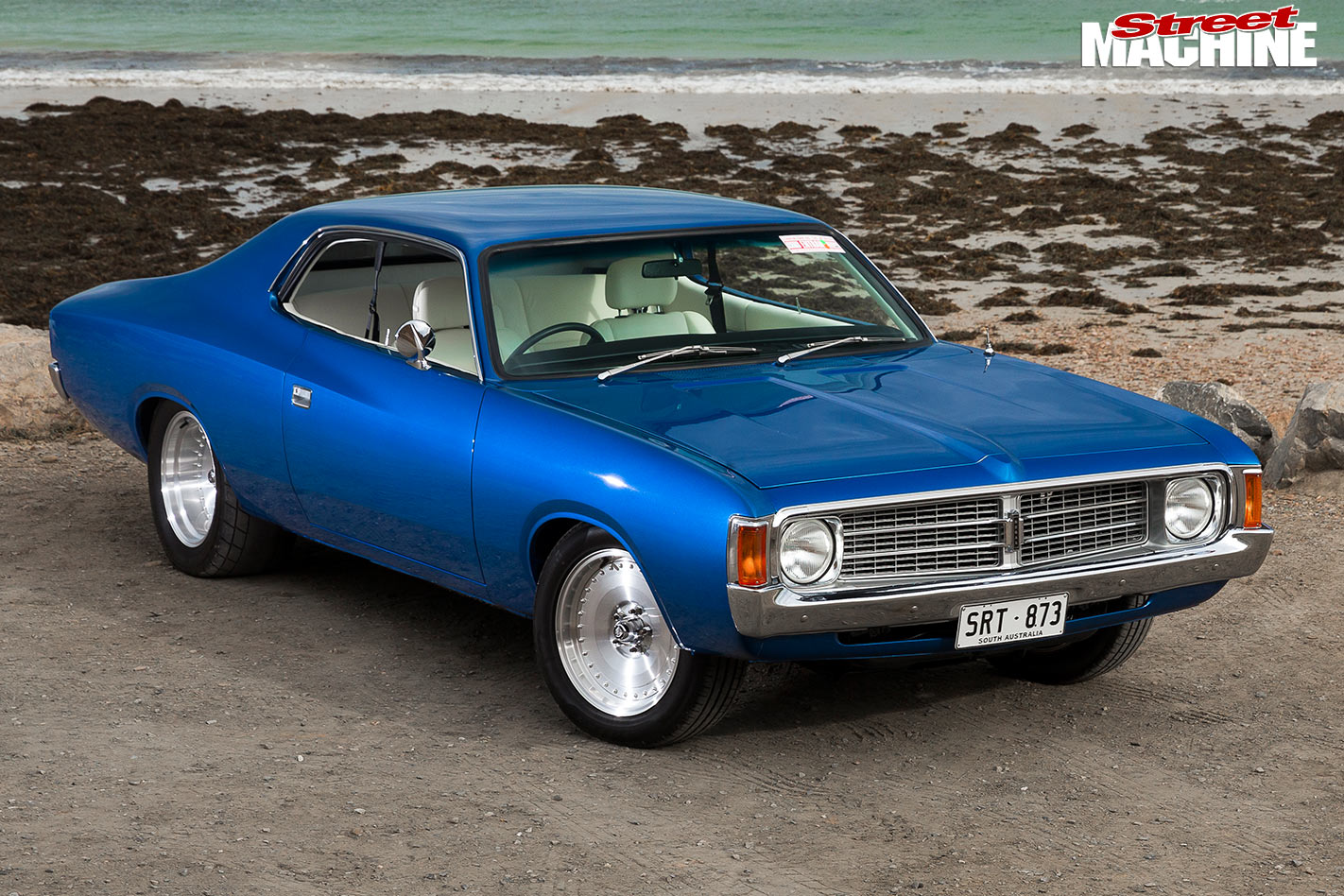 With only a handful produced, this style of Val hardtop is a rarity. George chose to refine the car’s identity by fitting a VK Regal grille, chrome front indicator surrounds and VK tail-lights, for a far cleaner look

That was back in 2007, and George could see the potential in Chrysler’s often-forgotten, overweight brother to the stumpy Charger. With very little rust and a low asking price, this particular example was a win-win for George, and it wasn’t long before he hatched a plan. 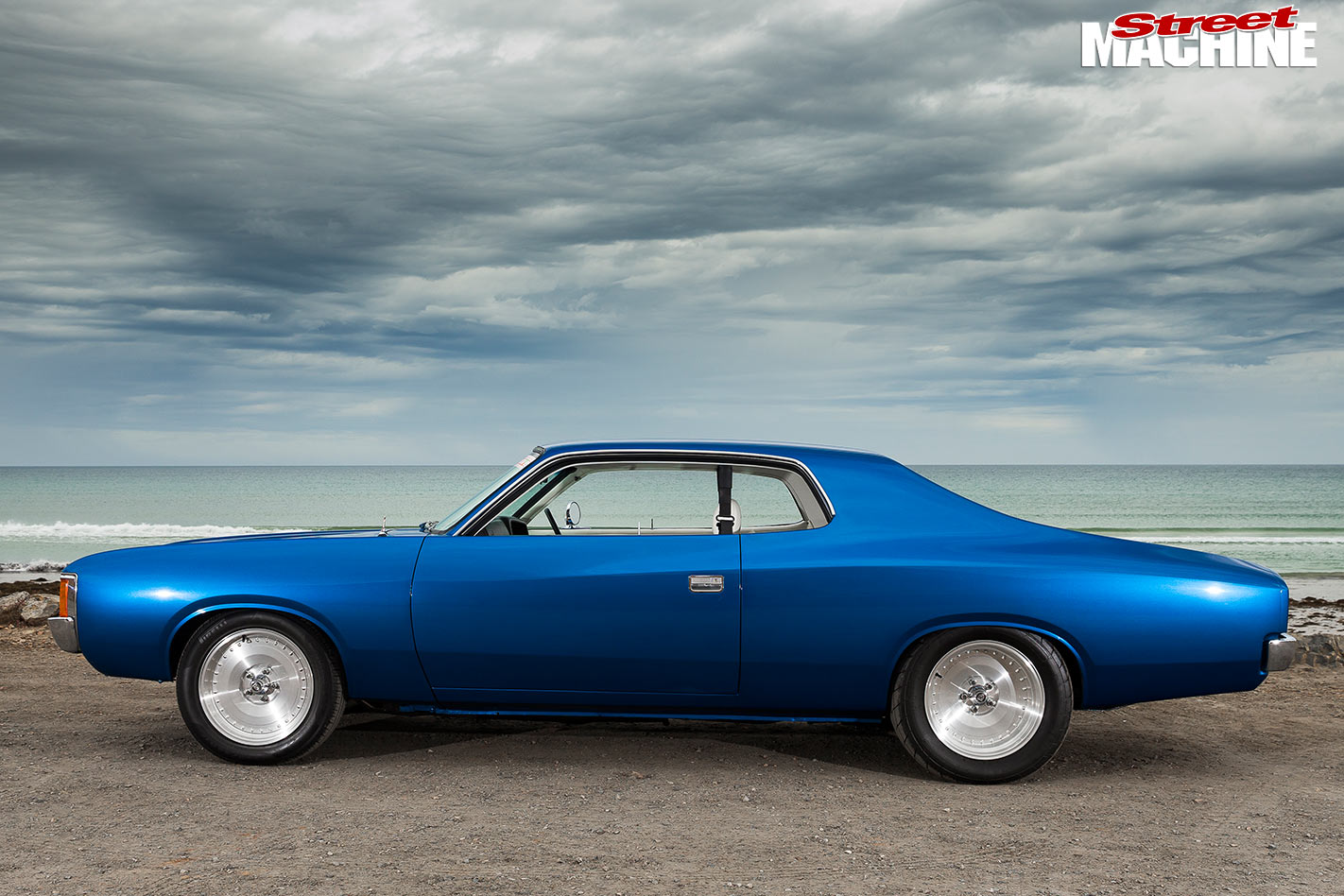 All panel repairs and the striking metallic blue paint is more of George’s handiwork, based around original Chrysler True Blue – he tweaked the final recipe by adding blue pearl but deleting the coarse metallic found in the original code

“I wanted a car that was both new- and old-school – classic in the looks department but refined in the running gear, trim, suspension and brakes. I’d become a fan of the Gen III Hemis and was impressed by their cylinder head design. Back in my drag racing days I’d learnt the importance of flow characteristics and port shape, so figured it’d be a great update over the traditional Chrysler choices. I wanted to keep loyalty to the brand as well.” 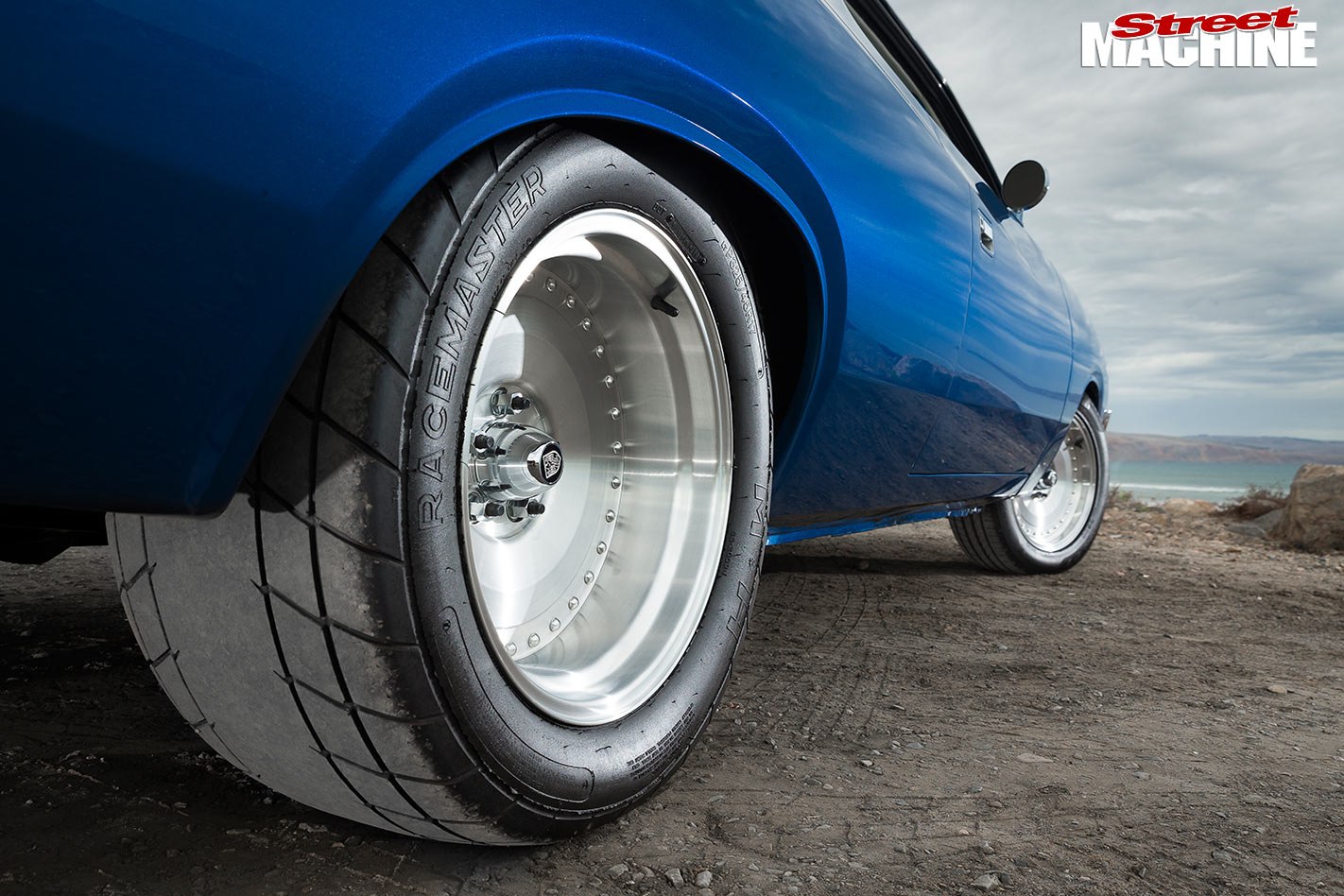 The generous rear quarter panels and long wheelbase of these late hardtops earned them the ‘hippo’ moniker back in the day, especially if running 360 power too. George has nicely re-proportioned his VJ with 17in Center Lines and plenty of rubber under the tubbed rear

That’s a refreshing statement in our LS-obsessed world, but you have to remember that George started this build nearly a decade ago, so was at the pioneering end of this style of conversion. 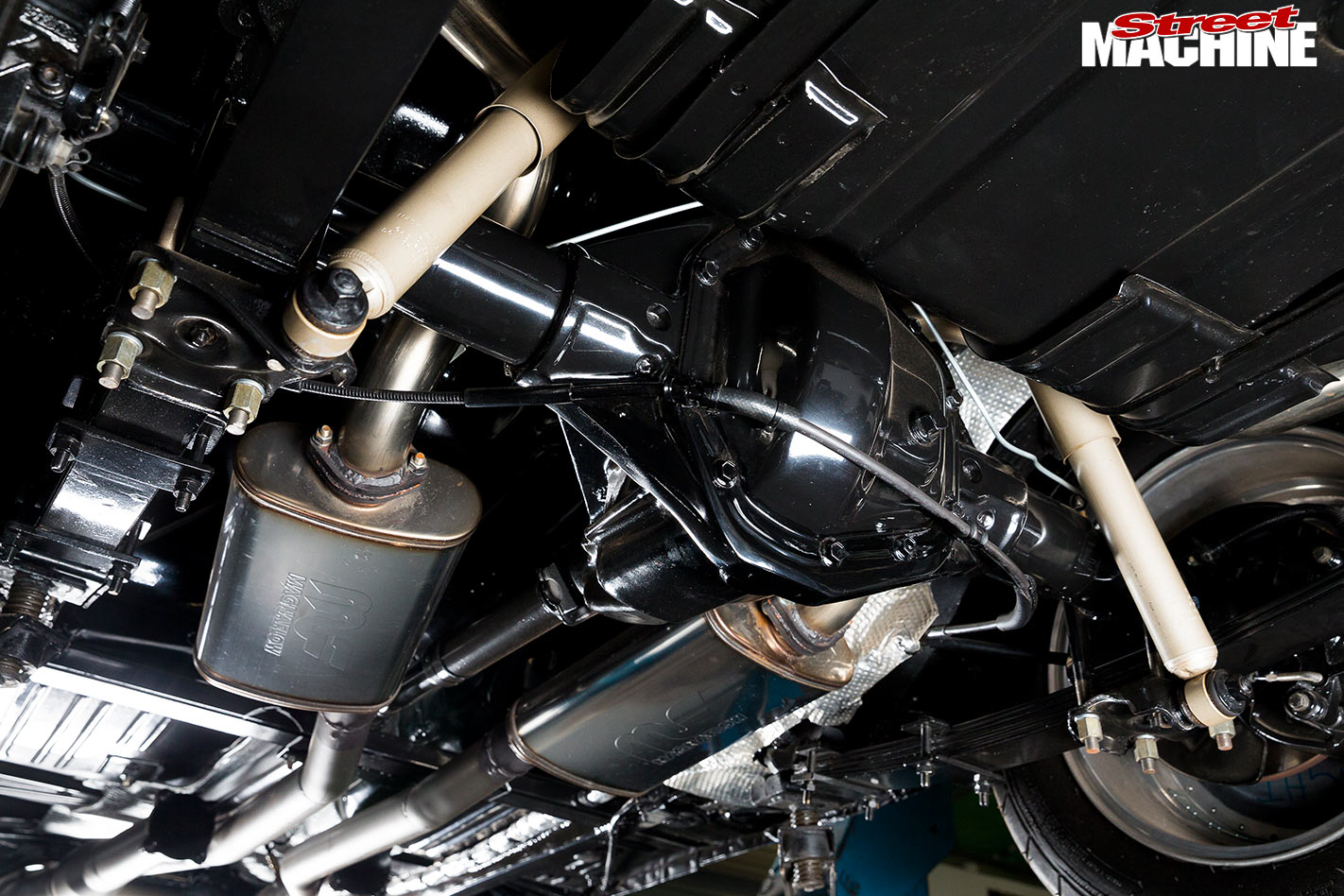 The whopping 10.5in Dana 70 diff originally saw service in a 70s Dodge D5N truck, and is filled with 4.1 gears, a Truetrac centre and 35-spline full-floating axles. The reset rear leaf springs have been moved inboard to the rails for added tyre clearance, while the factory VJ fuel tank was reworked for EFI duties

He sourced the 6.1-litre SRT donk and five-speed Mercedes-based automatic transmission out of the States; they’d started life fitted to a 2006 Dodge Charger. George and long-time mate Bruce Morphett got busy slotting the engine nicely within the standard Valiant bay, centralising it for good measure. The K-frame required only minor modifications in order to run George’s preferred Chrysler 300 wrap-style engine mounts (as opposed to the standard sandwich design). A Milodon A-body-conversion sump from the US slotted straight in but had no provision for a dipstick, so was altered to suit. 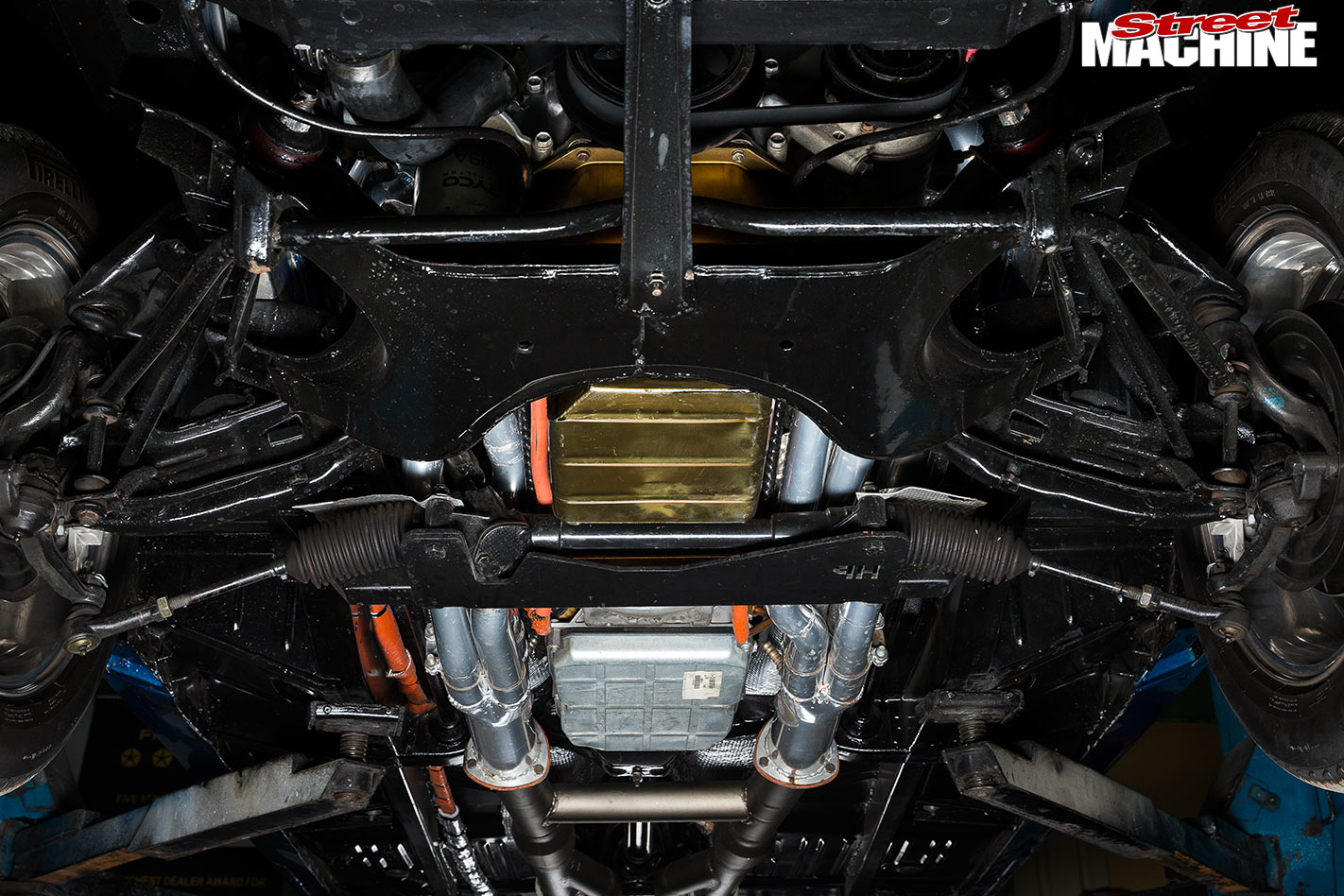 George and Bruce then tackled the four-into-one pipes, ducking and weaving the 17/8-inch primaries around the steering gear and managing to squeeze all lengths above the VC Commodore steering rack and K-frame. They converge at 3.5-inch collectors that taper back to a twin 2.5-inch stainless system running Magnaflow mufflers. 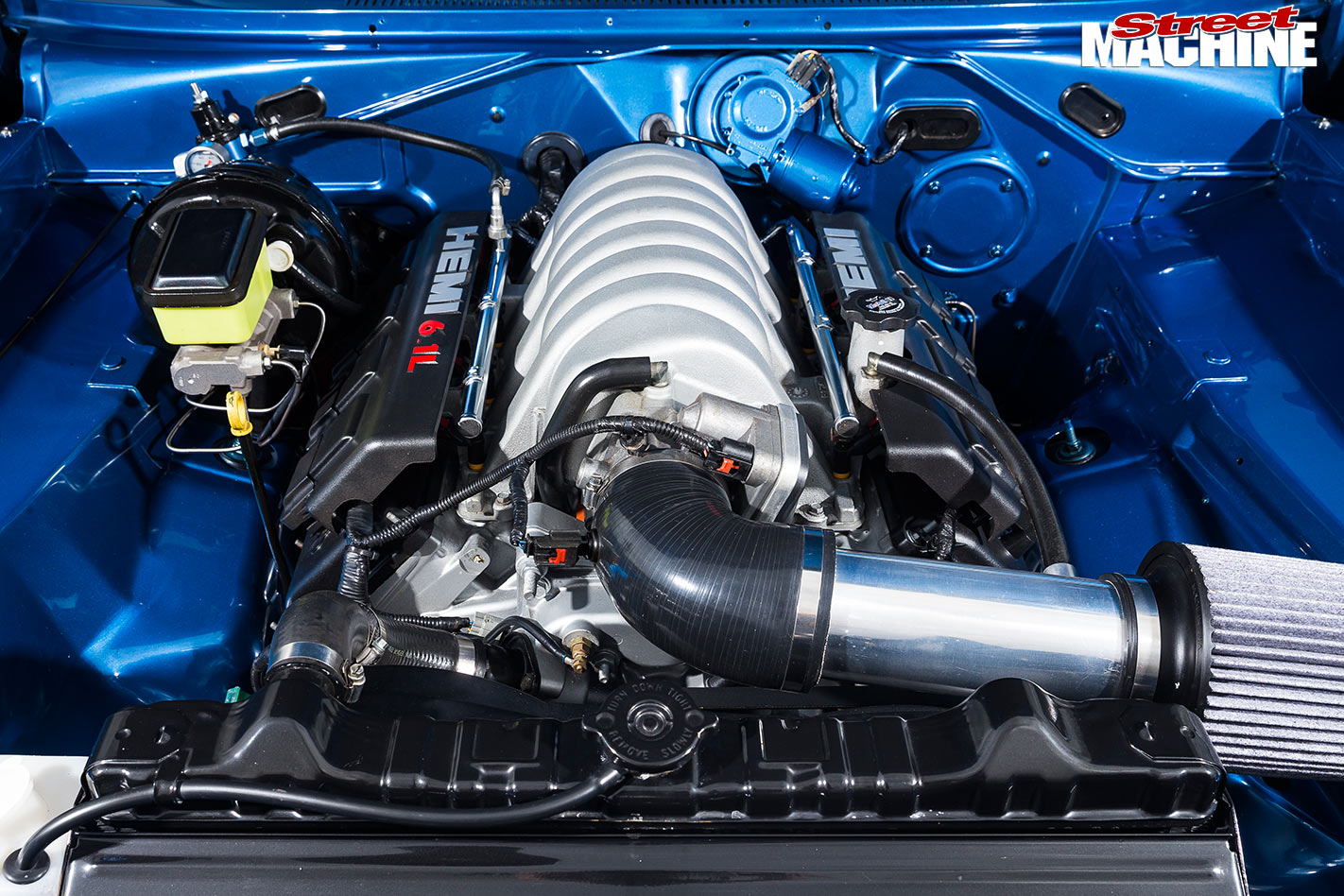 The 6.1L Chrysler Hemi looks like it always belonged in the Valiant engine bay, surrounded by cooling and brake ancillaries from the CM Valiant parts list. “The driveability is just insane,” George says. “It is like a brand-new car to drive. There are no cooling or heat-soak issues and it’s economical too; it’ll get 29mpg out cruising with my mates”

The transmission tunnel was opened up to house the extra gears (and therefore the larger case) of the NAG1 auto, the bellhousing of which was altered to re-mount the starter on the left side for necessary clearance. “We got the engine fired up no problem but the auto was a different story – it just wouldn’t shift gears,” George says. “Grant from Dynotronics was the saviour here, tricking the transmission into thinking it was using a wheel-speed sensor when in fact we mounted a sensor ring to the output shaft of the auto. It took a lot of head-scratching and an engineer to spec and fabricate the correct-size sensor ring, but it was worth the stress; the transmission works flawlessly.” 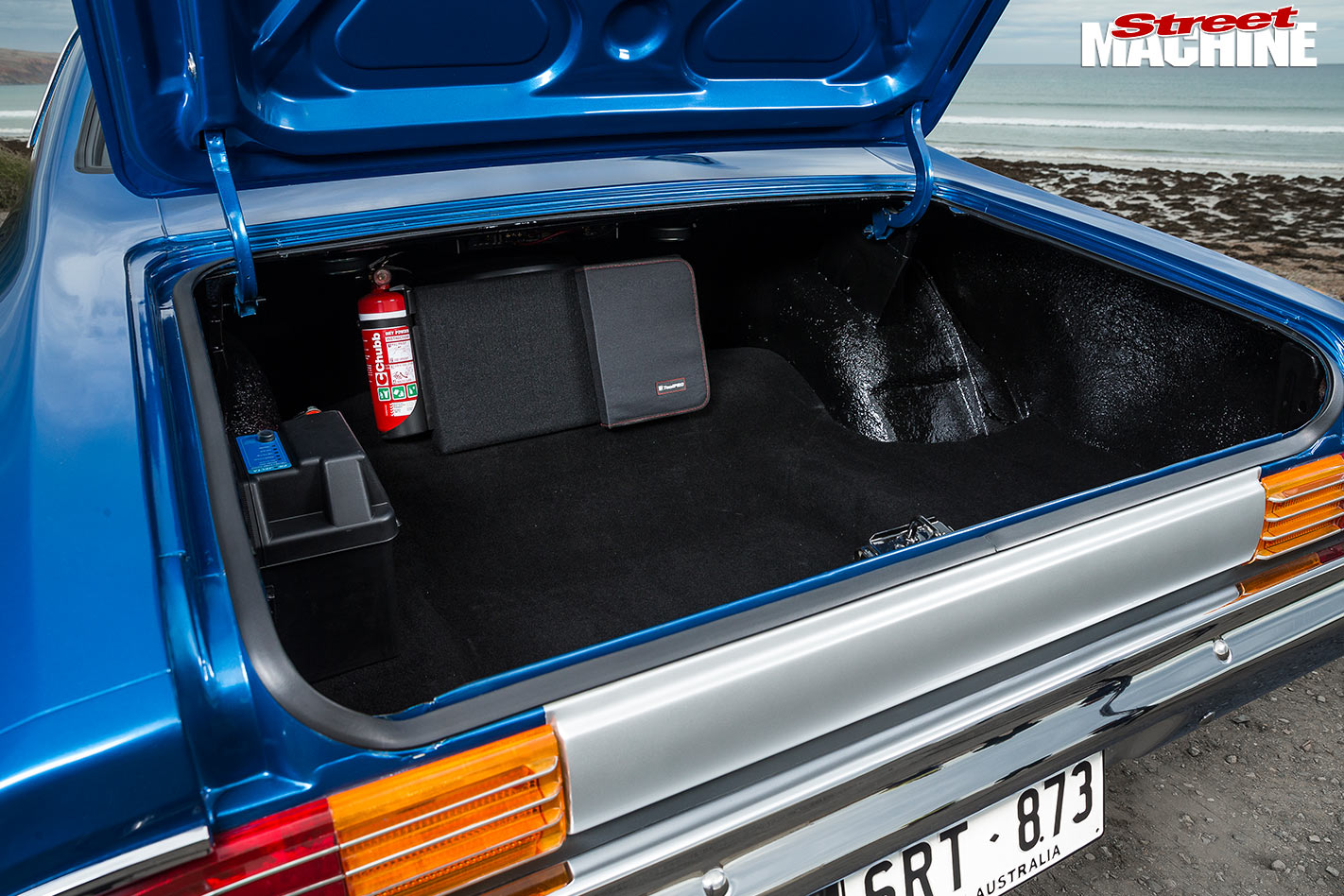 With 425hp on tap in stock form – the less restrictive pipes and exhaust are sure to have bumped up that figure – a 3000 stall and the 3.59:1 first gear, this SRT8 combo has plenty of punch to get the 1600kg hardtop off the line. Even so, George has plans to stroke an alloy-based 6.1 block to 440 cubes and tickle the heads for a little more go. “This engine was more of a test-bed to help fine-tune the conversion, but the drag racer in you always wants more,” he laughs. “The rest of the driveline was prepped with that in mind.” 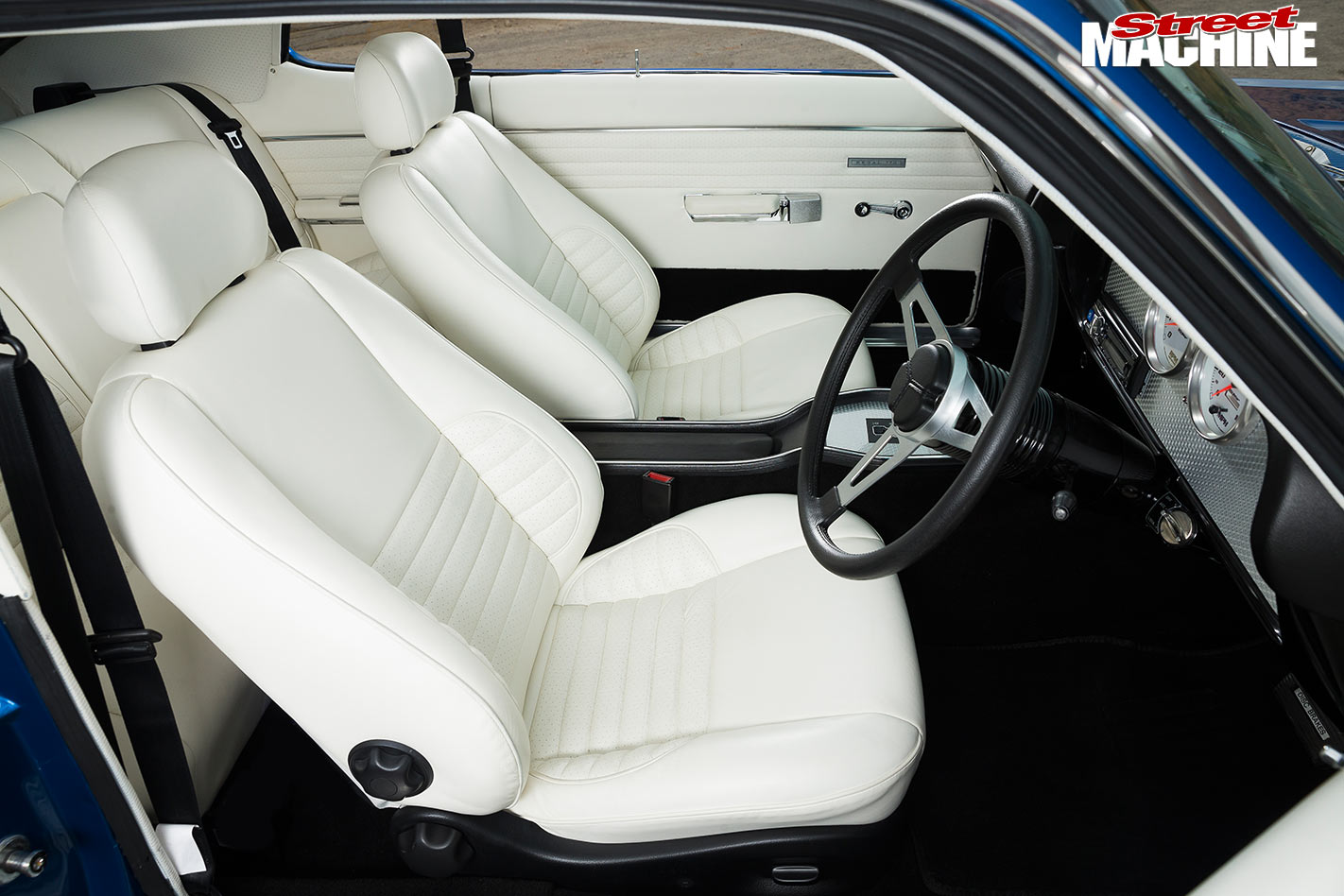 The blending of new and old extends to the interior, where George has fitted Monaro buckets re-foamed to match the specs of his Chrysler 300 SRT8 daily drive

A mega-sized 10.5-inch Dana 70 diff wasn’t part of the original plan, but George had already spent coin on shortening and custom axles before realising it wasn’t the Dana 60 he’d supposedly bought. A Truetrac centre and 4.1 gears round out this third member, which with the overdrive of the transmission sees the hefty Val pulling a casual 2350rpm at 100km/h. 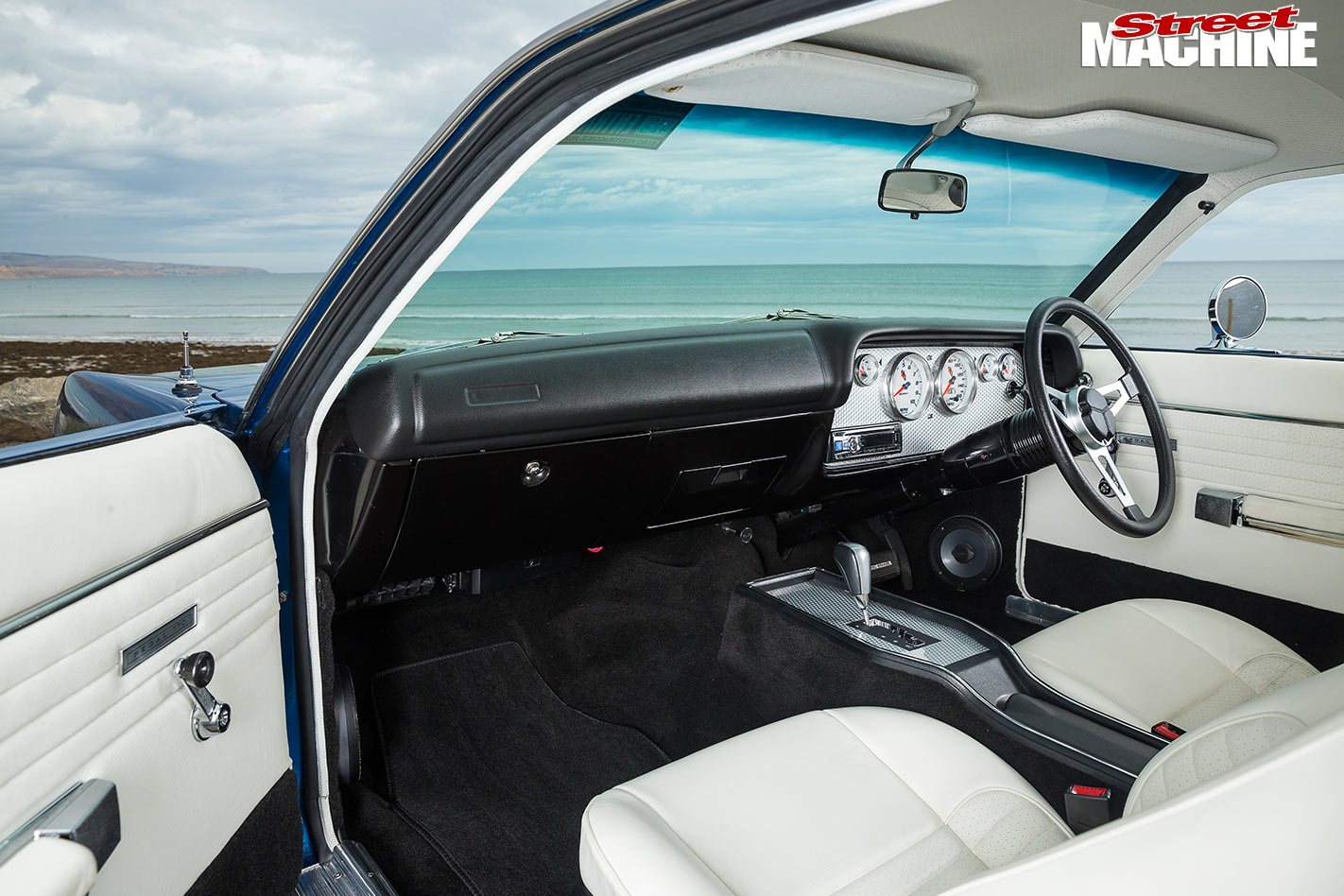 Chassis connectors and wheel tubs were added for good measure, the latter providing ample room for the one-off rolling stock. George chose the South Aussie mainstay of Auto Drags – dubbed ‘Adelaide wheels’ by those outside Croweater borders – but with a twist; he had the 17x7 and 17x10 rims built in satin finish and machined to run early centre caps, a request that Center Line probably isn’t keen to repeat due to the added work involved. Pirelli 225/55s and M&H Racemaster 325/45 hoops add just enough sidewall to satisfy George’s ‘refined old-school’ build strategy.

Serviceability won out over brand allegiance when it came to the braking system, with George treating the Val to Ford Territory discs and calipers up front and ED Falcon discs at the rear. 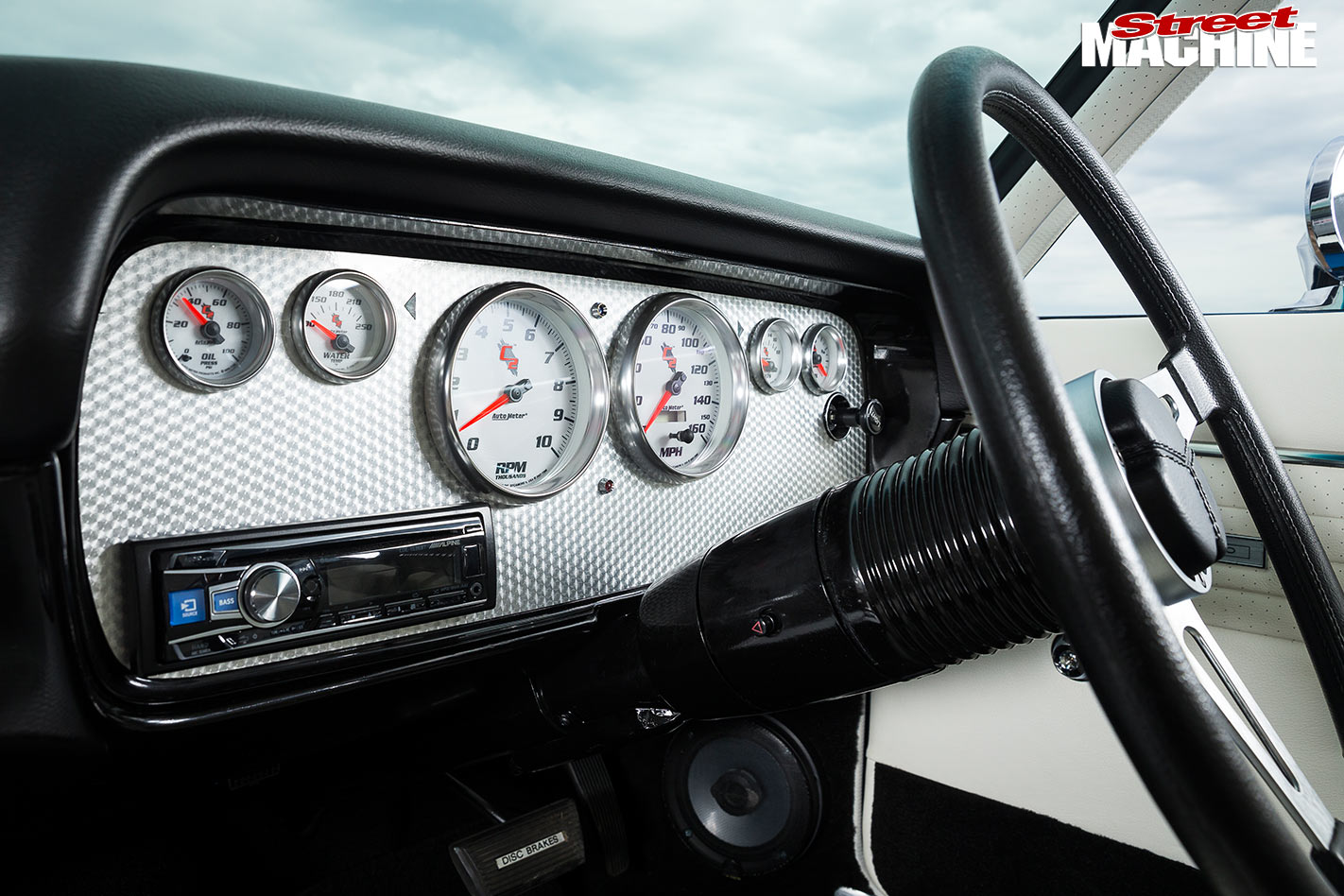 George’s dad Steve was a panel beater and spray painter back in the day, so George grew up in and around panel shops, picking up plenty of skills along the way. The hardtop’s body was in pretty good nick when George bought it, but it did sport one bad rear quarter, which he smartly knocked into shape. He tackled all of the remaining panel repairs before laying down his take on the factory Chrysler True Blue paint, tickled to add a modern edge to this 70s hue. A VK Valiant front end treatment and tail-lamps were added for an individual touch, with all remaining chrome restored to better than new. 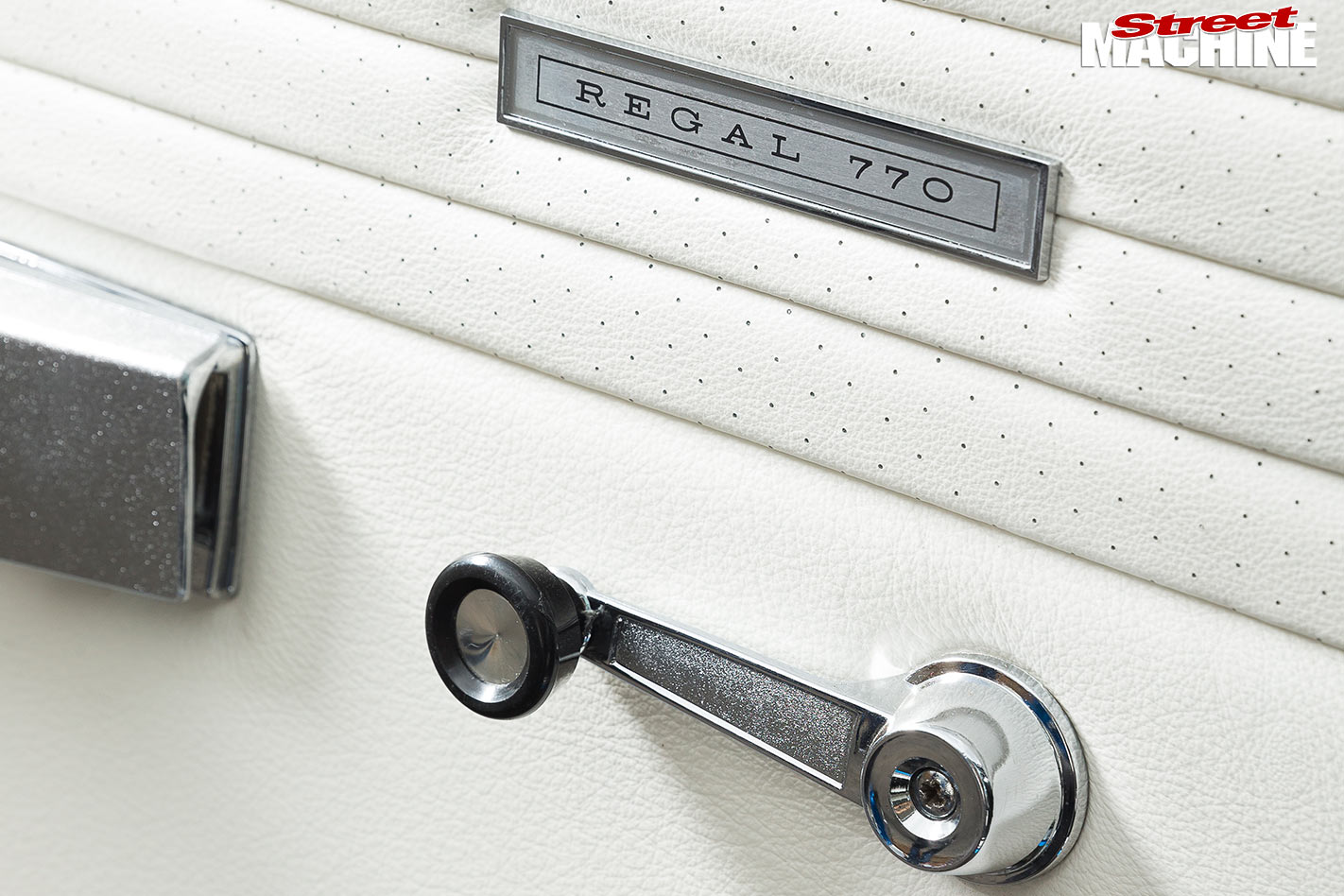 VY Monaro buckets were re-bolstered to match the comfort found at the wheel of George’s Chrysler 300, but the blending of old and new continues with the front and rear seats sporting the 770 pattern of the R/T Chargers. The seats and door trims were stitched in white garment leather by Allan Smith Vehicle Trimming, with contrasting black chosen for the carpet, dash, console and timeless Chrysler three-spoke sports steering wheel. An SRT shifter blends perfectly into its new surroundings, while an electronic SRT accelerator pedal assembly is a must-have to activate the fly-by-wire throttlebody assembly. 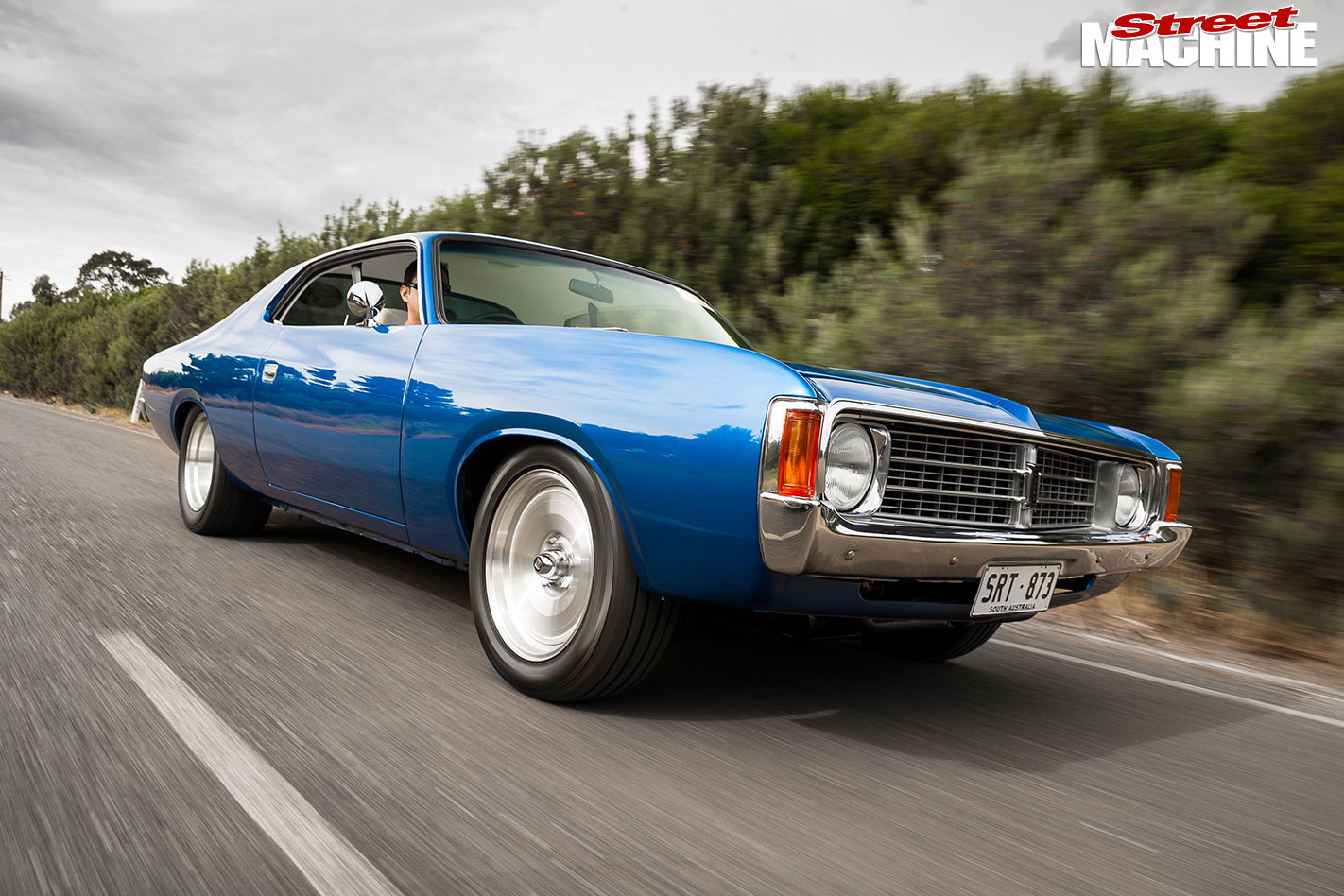 A Top Five Australian berth and runner-up for Best VH/VJ Hardtop at Chryslers On The Murray 2016 were the icing on the cake for George after the six-year build, but he’s not ready to hang up the tools just yet. “The 440 stroker is next on the cards, and I’d like to fit a set of 12-inch rims with 390 tyres to match,” he says. “I’ll be looking for low 11s in full street trim; then I’ll move onto something new, probably a Valiant ute or hot rod. 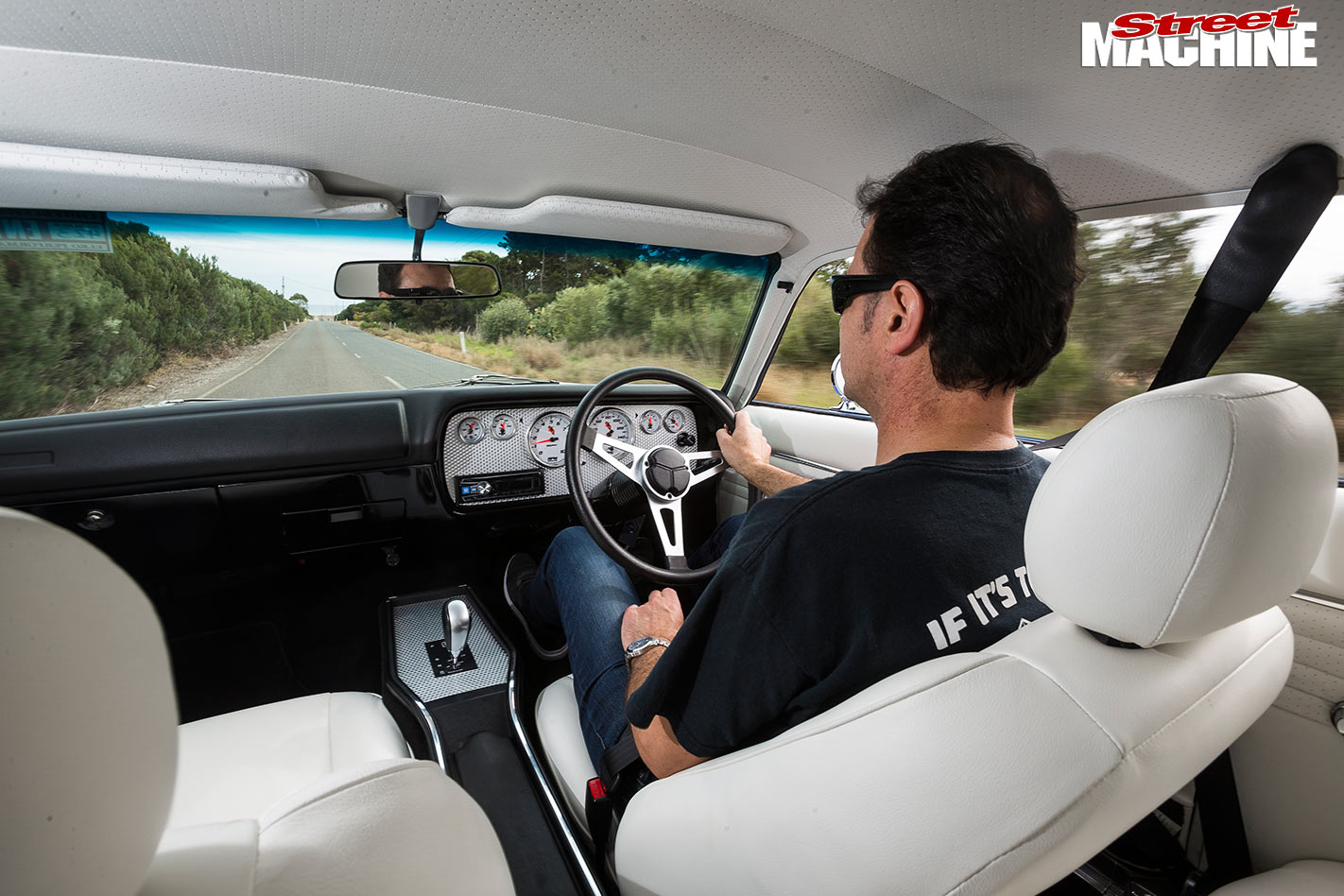 “In the meantime I’m just enjoying cruising it; it runs, drives and handles like a new car and the leather interior is just beautiful. Mixing classic looks with new-school technology is truly the best way to have your cake and eat it too.” 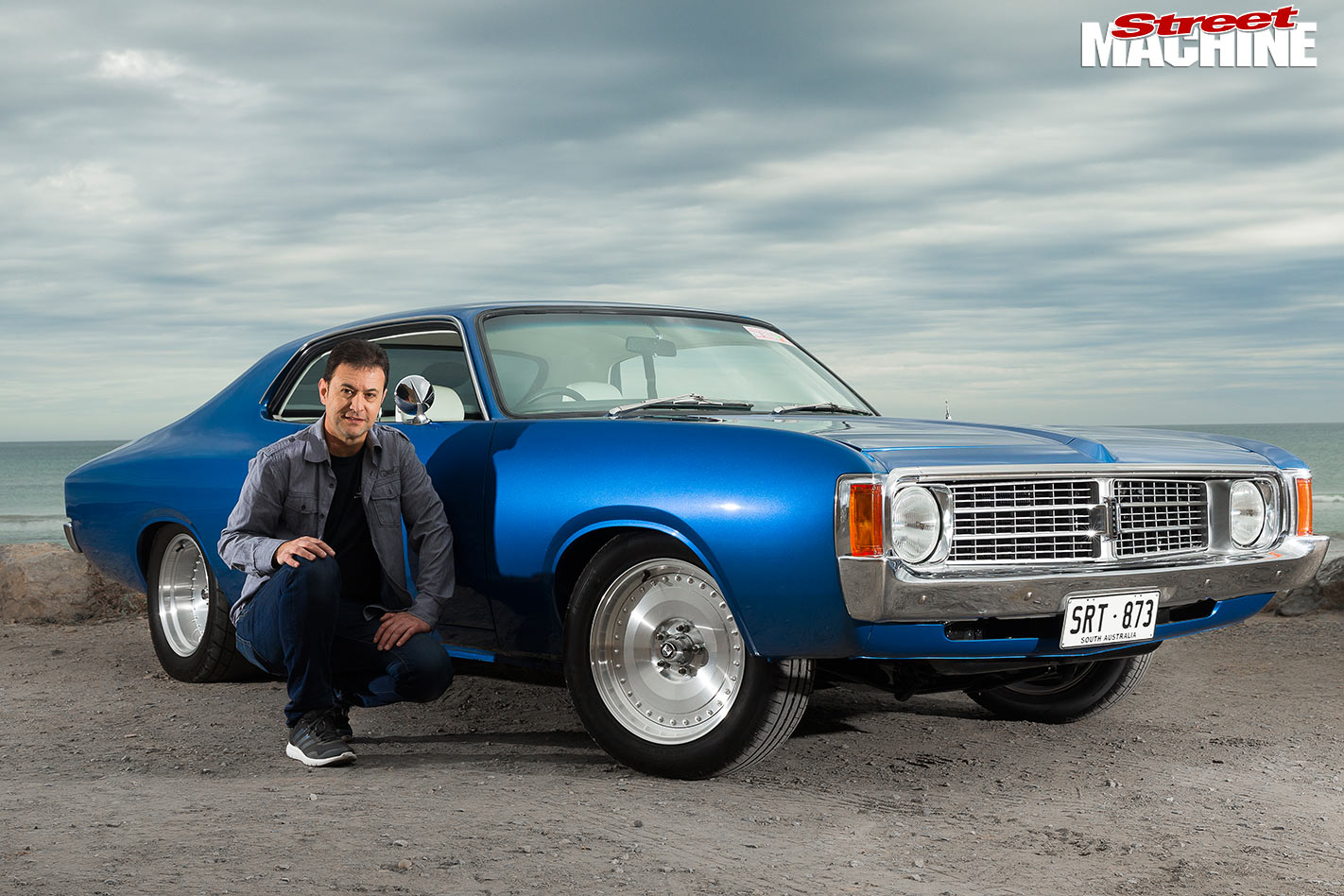