Aussie Top Fuel guru Stan Sainty passed away today. We are working on an in depth tribute, but in the meantime, this interview from 2002 gives some insight into his many achievements

LEGENDARY Australian innovator Stan Sainty passed away today, after a short battle with cancer. From boat racing to Top Alcohol and Top Fuel, Stan and his team cut their own path, building not only their own cars, but also their own unique three valve engines. The Sainty Top Fuel team will competing in Stan's honour at Sydney Dragway 3-4 November with a new setup that Stan was working on almost up to his final days.

We are working on a tribute to Stan and his achievements, but in the meantime, we reproduce this interview with Mark Arblaster from the July 2002 issue of Street Machine to give you some insight into a great Australian. 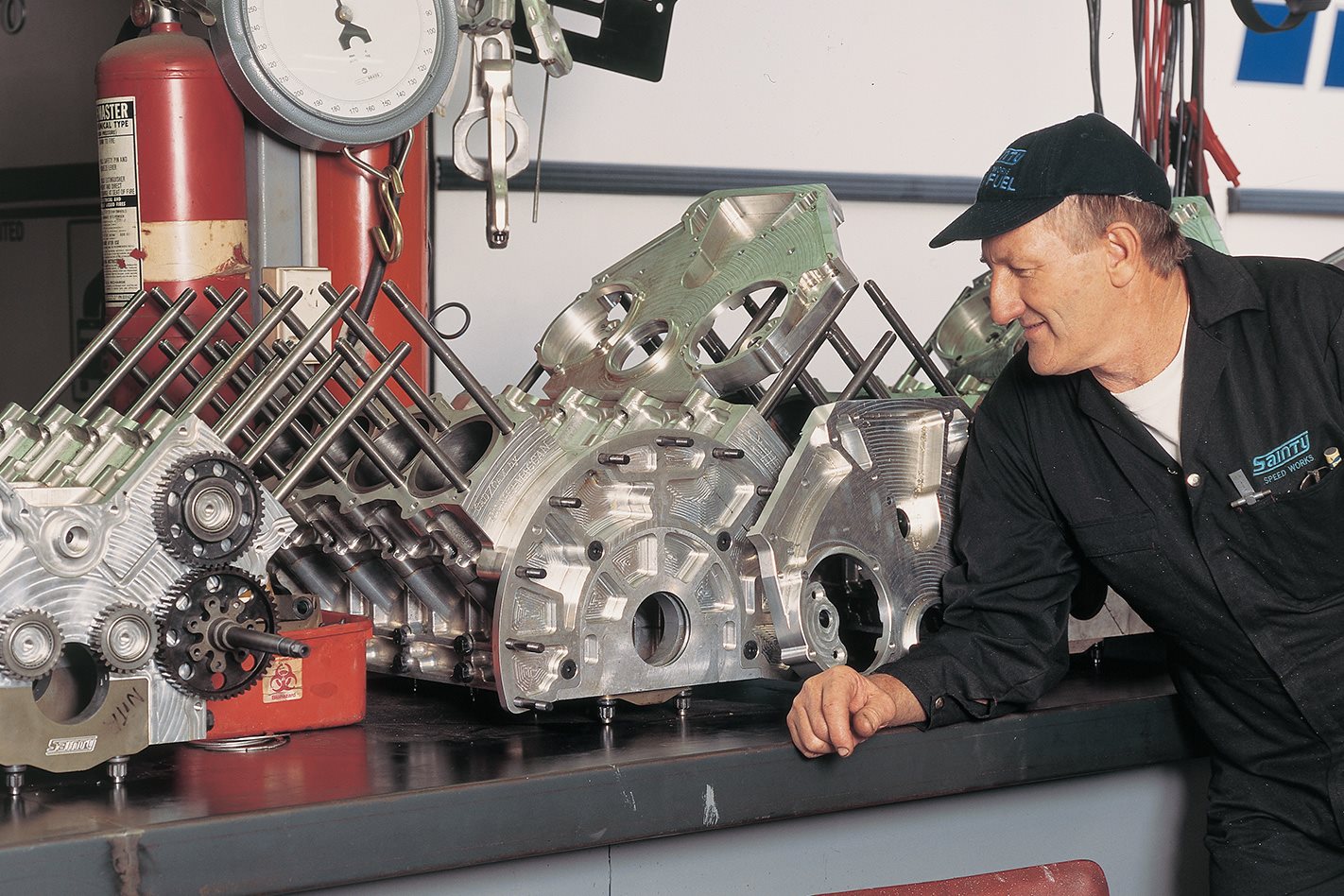 Sainty Speedworks is located at Wentworthville, in Sydney’s central-western suburbs, and the engines Stan Sainty builds there have been outlawed in the United States. After starting out pushing the boundaries in displacement boat racing, he and his family have been creating Top Fuel drag engines almost entirely out of billet alloy for the past 15 years. Such is the quality and design of these engines that many people in the US believe they present an incredible threat to existing technology. MARK ARBLASTER catches up for a chat. 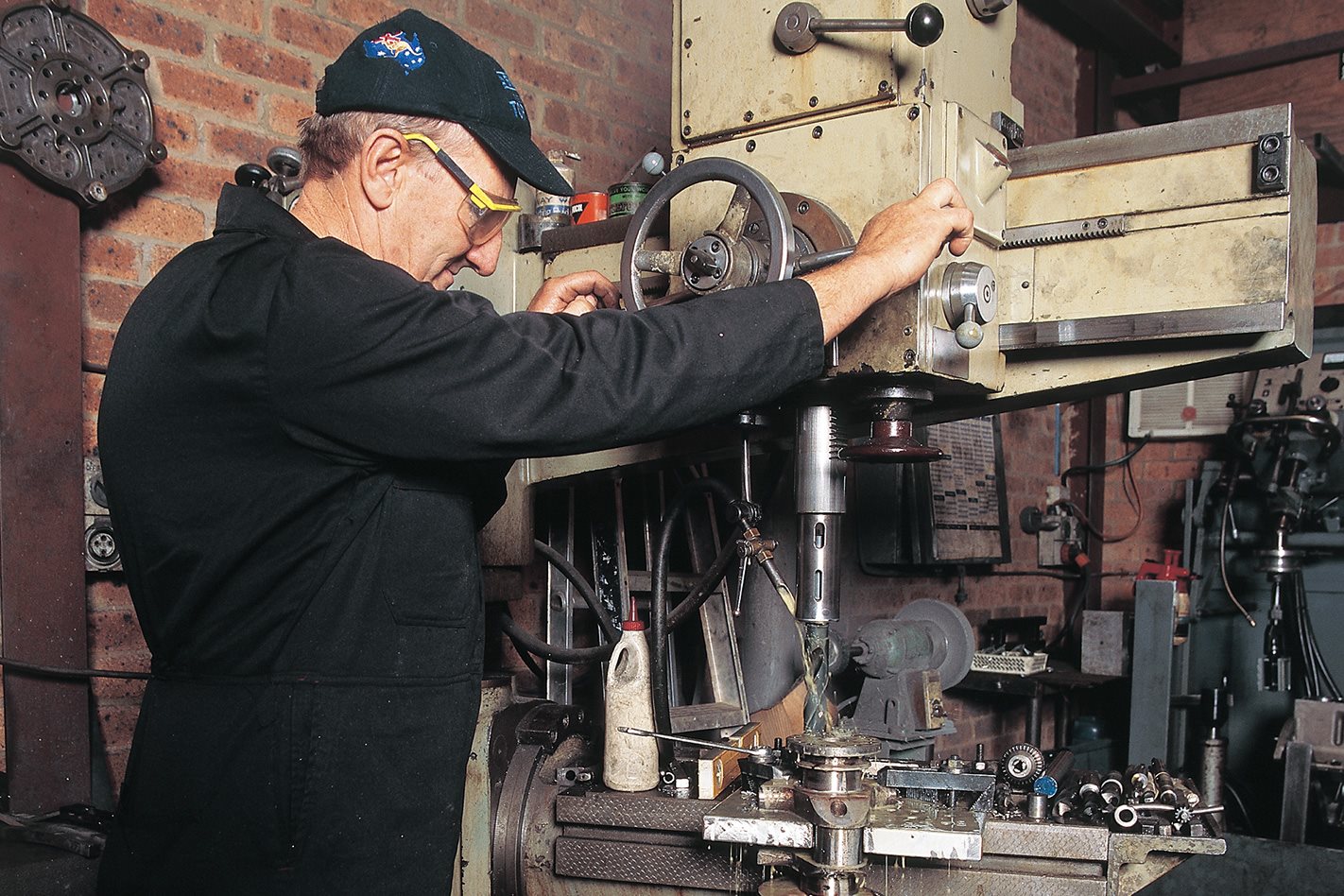 Where did it all start?

“We started out boat racing – we were into circuit-racing boats. I was about 20 years old.”

Did you want to build your own components back then?

“Not initially. We started out racing big-block Fords, unblown engines, and finished off with big-block Chevs in fibreglass Everingham-style boats – that’s where we came from.”

You were drag racing boats at the end?

“In displacement boats the fastest we ever ran was 143mph – which at that time was the fastest anyone had run in the country. That was 20 years ago.”

Did they make much grunt?

“The engines were 560, stroked, Rodeck-style Chevs with 8/71 superchargers. We were actually making our own blocks back then. After that we ran a four-cam four-valve billet engine that we raced very successfully in a drag hydroplane that ran 175mph.”

It was a modified Chev?

“No, we built our own engine from scratch.”

Why build your own?

“We were racing seriously and wanted people to do stuff for us that they couldn’t or wouldn’t do, so we decided to build our own.”

What was the first engine you built?

“It was basically a four-valve Rodeck copy. We bought a pattern and cast our own cylinder blocks. From the time we decided to build the engine it took us a year to the day and we built it under the house that we still live in. That included getting patterns made, casting parts and machining up three complete cylinder blocks. I can’t remember how many sets of heads we made for that quad-cam design but it was a few.”

Boat racing at that speed must be dangerous.

“The boats were pretty dangerous but that wasn’t the reason we got out. One of the main reasons was son Terry was taking an interest in car racing. He’d had a few drives of the boat and didn’t really like it and said he wanted to go car racing. So I said, let’s do it together. At the time Eastern Creek was about to get up and running and we were always interested in drag car racing but never got involved earlier because of the closure of Castlereagh.”

So you decided to start with Top Fuel?

“Not really. We decided to run the engine we’d been running in the boat for a while to see how it went. We found that it didn’t like the load the car could put on the engine, but the main problem was the engine was too slow to work on. Because it was a four-cam with cam buckets it could take as much as two days to set the tappets. But having said that, if you didn’t burn something in the engine you would never have to touch them again. They ran reasonable but the biggest problem was working on them.”

This was in a dragster?

“Yes. We bought Santo Rapisada’s old Fuel car and decided that to be competitive we had to step it up and run Top Fuel. We had to make a lot of changes. Ultimately the four-valve engine was not the way to go.”

Will the new engine be better?

“Yes. We knew we had to build the three-valve mainly for strength, integrity of the metal and to make it quick and easy to work on.”

You must have been nervous hitting the key for the first time on an engine you built and designed entirely yourself.

“Yes but it’s very rewarding. We are still to prove that the engine is competitive but we think it will be.”

Tell us about the new engines.

“There are two configurations available. They are six-bolt main cap assemblies with six bolts around each cylinder for head clamping. The version to be run on alcohol will be bigger bore with a shorter stroke, as they need to be revved higher to make power and blower boost. The nitro version will be 498 cubic inches – 4.5-inch stroke and 4.18-inch bore, with 7:1 compression. They will be comparable in price with a Chrysler.”

How hard do they go?

“We’ve been testing one in a boat with a Whipple supercharger that has made over 60lb of boost and revs to 9400rpm. The boat clocked 187mph (300km/h) and was still climbing when the hull disintegrated.”

“Dunno, but a lot. All the fuel cars that are running good are making in excess of 5000hp.”

So where do you start in designing an engine like this?

“We do a lot of repairs on Chryslers and other racing engines and we see the weakness that is in them. Subsequently we have tried to build our engine around those weaknesses to make ours better, stronger and easier to work on.”

Must make you proud to see your engines on the track.

“Yes, it does. I’m just proud to fly the Aussie flag.”

Have local people been supportive of your effort?

“Not really. People think that if it’s not made in the United States then it must be rubbish. There have been a few who have supported us though.”

Your plans were originally to sell these engines worldwide?

Too much of a threat?

“I didn’t say that [smirk and a big pause]… My view is that we must be doing something right.”

As the engines are prototypes, will you just build two of them?

“No, we will build 10 engines, seven nitro and three alcohol, and head to the track with an arsenal of spares. We’ve built 30 cylinder heads, each worth $700 just for the block of alloy before we start working on it.”

All your engines are machined in CNC mills. That must take some programming. 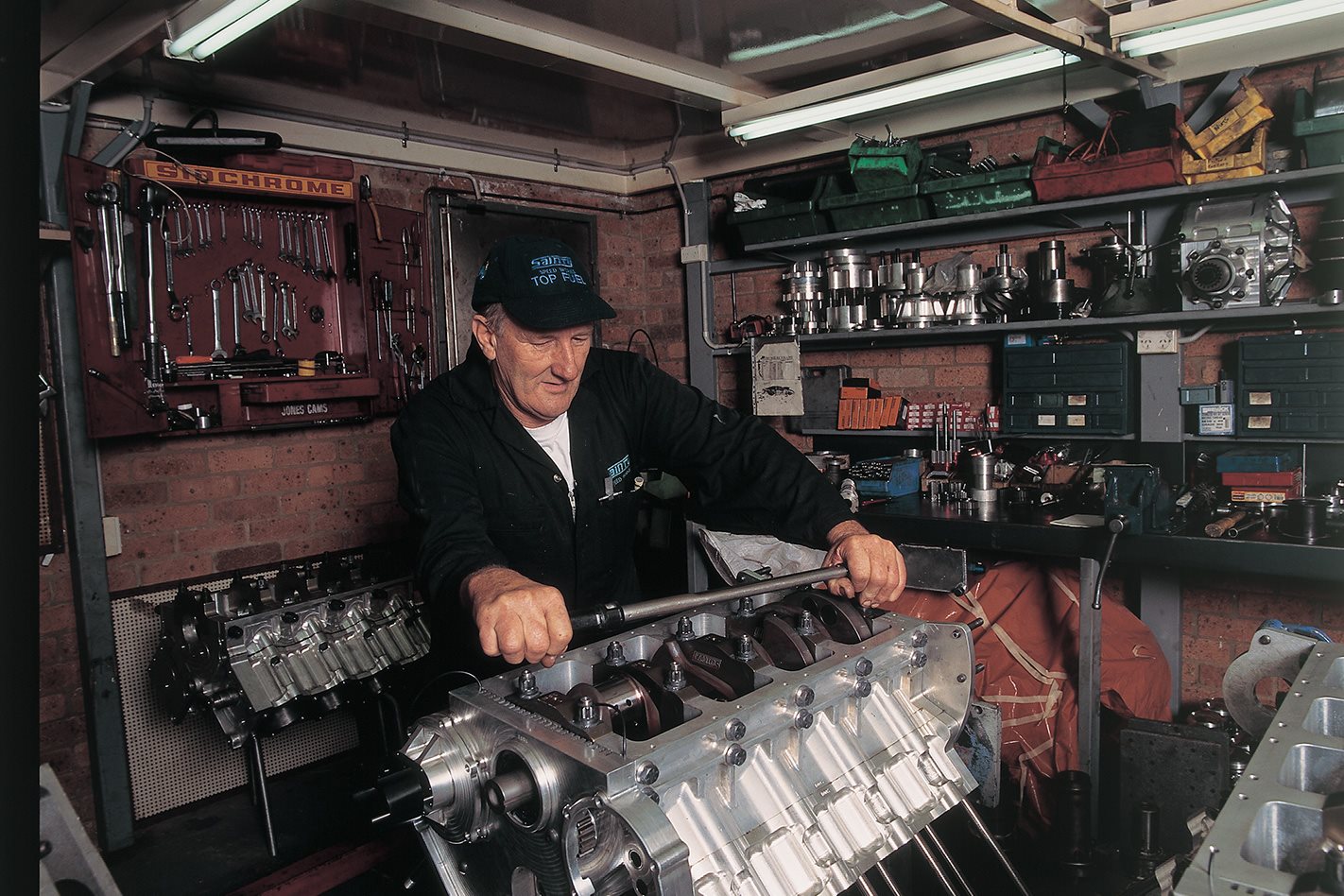 “To give you an idea, we just ordered 240 Ross pistons of varying compressions for nitro and 150 pistons for alcohol.”

“The more fuel you can burn the more power you can make but if it spins the tyres and revs up too much it will hydraulic and blow up. If it has too much load on it, it will be lean and blow up. At wide-open throttle the engine will use 65-80 gallons per minute. That’s two 44 gallon drums per minute.”

With the limited testing you have done, what’s the best time your engine has run in Top Fuel?

“If we build from billet (EN26) we can guarantee the soundness of the material as it is all aircraft-grade. The material is roughly seven times stronger than cast and we don’t need patterns and foundries. As such we can make minor changes easily at minimal expense.”

Even your cranks are tough.

“Most Fuel cranks last seven passes if nothing else goes bang but we’ve never hurt a main bearing or destroyed a crank and we still have every head and block that we have built and are still racing with them.”

Where will you be in 10 years?

But you love this, don’t pretend otherwise.

“I do, I love it very much. I love the people associated with it, the sportsmanship involved in it and I think it’s fantastic.”

Ever wanted to climb behind the wheel and have a lash?

“No desire, happy to watch. You can often do more as a spectator than as a driver.”

You must feel like Captain Invincible being able to build anything you set your mind to.

“We build our own cranks, blocks, heads, cams, conrods, valves, oil and fuel pumps, diffs and rocker gears. We buy the rings, pistons, valve springs and bearings – the rest we make. We want to build hard-core race parts and fly the Aussie flag.”

What advice would you give racers or aspiring racers?

“Buy the best quality components that are available. Not the best they can afford but the best available.”