One hundred per cent street driven with a reliable 1000hp. Gotta love that!

WHAT’S a street car? That has to be the most controversial question you can ask street machiners. Ask 10 guys and you’ll get 10 different answers. But whatever your definition, there are no arguments where Steve Santos’s Walky is concerned — it’s a true street weapon. Here’s a machine that can reel off 860rwhp on dyno runs yet it still gets driven to cruises in Sydney. 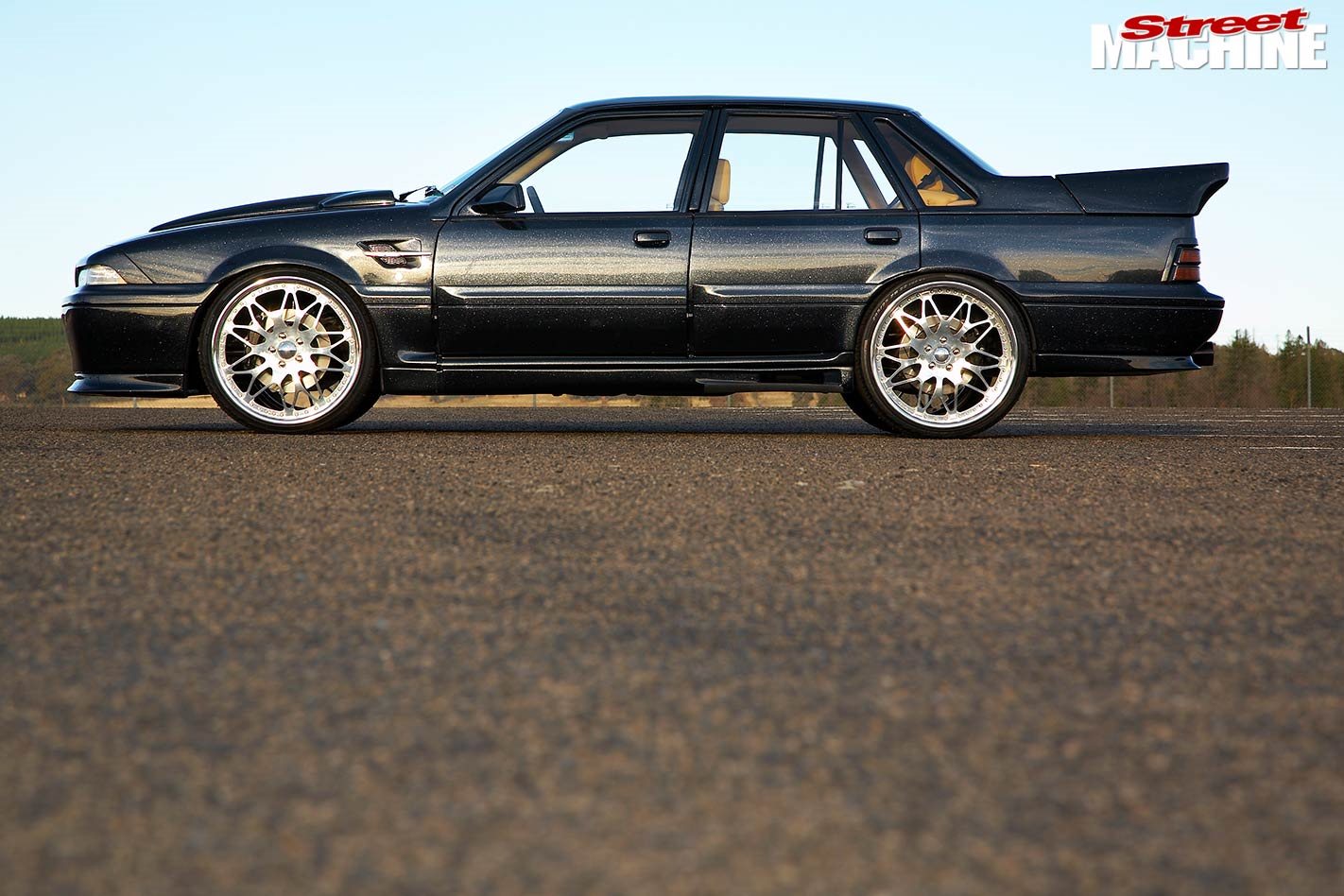 Big deal; hundreds of cars cruise in Sydney every weekend. The thing is, Steve doesn’t live in Sydney — he’s from Canberra. So how many people can say they’ve just jumped in a 1000hp car and cruised 300km each way? If you’re honest, very few of you have your hands up; genuine 1000hp cars are mighty thin on the ground and when they do show up they’re almost always on a trailer.

Most of these cars are “engines with wheels” as Steve calls them — the body only exists to get the engine to dyno comps. That’s not the case with Steve’s Walkinshaw. “I drive the arse off it,” he says. “It gets driven everywhere.” 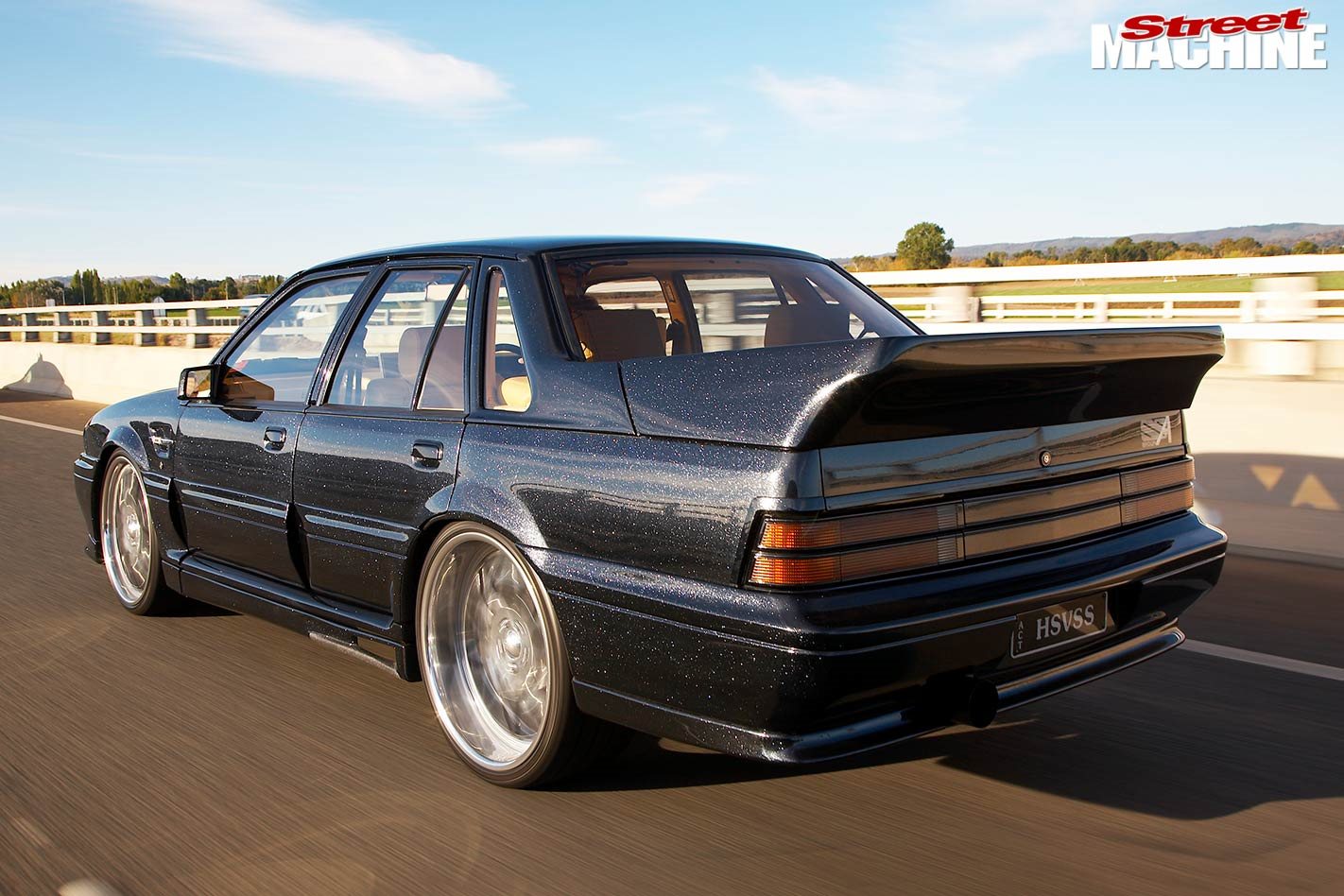 In fact the only time Steve’s had it on the trailer was when the VL had a mysterious starting problem and didn’t want to fire up for the drive home from Sydney Car Festival one year.

“I only trailered it 60km or so and then took it off because the trailer was swaying so much.” Off the trailer the Walky fired up again and Steve drove it home without a hitch.

While Steve’s car might not be the most powerful in the land it’s definitely the most streetable of Australia’s extreme horsepower cars. And it’s consistent too: Steve cranked out 868.5rwhp and then 868.2rwhp in subsequent runs at Summernats 19.

With those figures, Steve only needs to be losing a conservative 15.5 per cent of his engine power through the drivetrain and he’ll be making better than 1000hp at the flywheel. Realistically, 20 per cent is a more likely amount. That’s a whole lotta boogie.

“Pretty good. Could do with a bit more to be honest,” Steve says.

Anthony won the first ever Horsepower Heroes with 325hp — times sure have changed.

The car had changed hands before it got to Steve and when he went to check it out, the Walkinshaw wasn’t looking as flash as it used to.

“When I got it … Put it this way, it wasn’t what I expected,” Steve says. “It needed a complete bare metal respray, it was screwed.”

The intention was always to get Jake Edwards from Jake’s Performance to add twin-turbo boost. Jake’s another Canberra-based horsepower maniac, running an eight-second LH Torana.

“He’s just a genius at what he does,” Steve reckons.

Jake’s a big fan of single turbo set-ups but he’s also willing to give the customer what they want.

“Steve wanted twins for the show thing but that car is a rocketship,” Jake says. “I’d put it up against just about anything.” 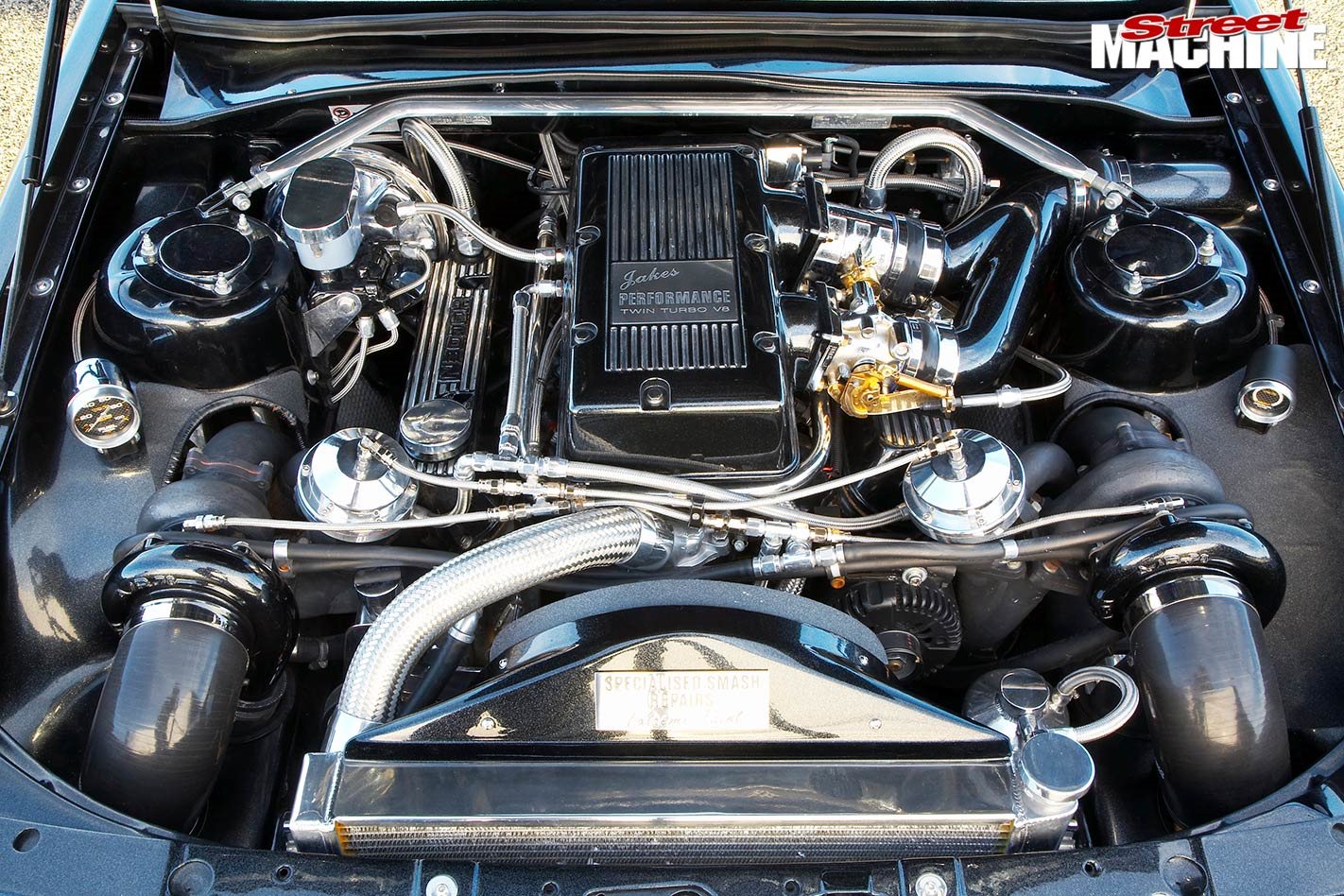 Under the bonnet is an assembly of great gear that starts with a four-bolt Group A block and a mega-desirable VL Group A intake. Ball-bearing GT35/40R turbos pump boost through a vertical intercooler and the intake pipe runs under the guard and into the engine bay behind the passenger-side strut tower. It’s a good way to stay clear of those hot turbine housings and keep the intake charge cool. External wastegates vary the boost from nine to 20lb of boost and that adds to its streetability. Say you’re out bush and low on fuel, you can wind the boost down and fill her up with whatever’s available. In fact, Steve’s Walky can probably make 700hp on basic unleaded. 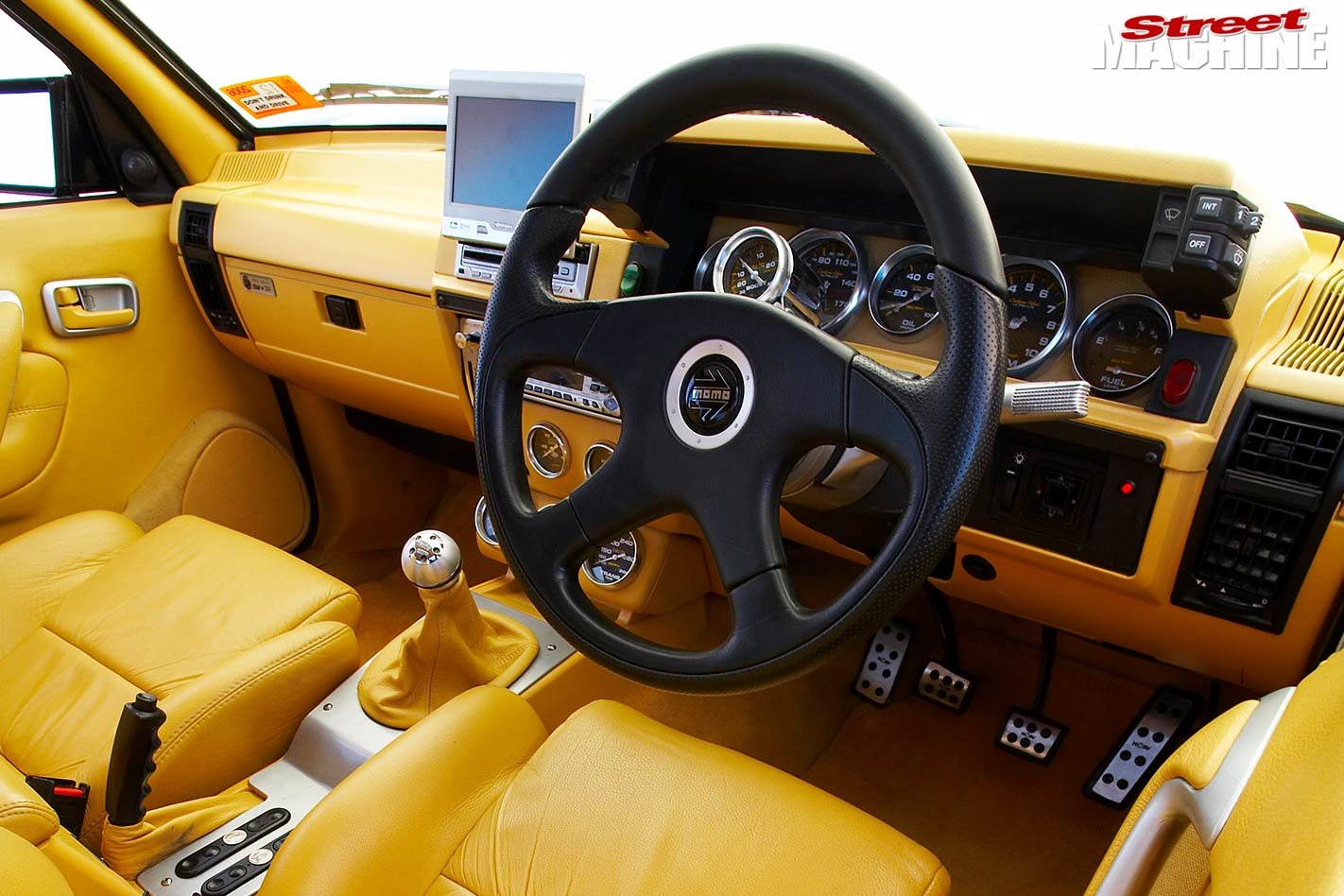 Staying with the street theme, Steve chose a T56 six-speed to sit behind the 344-cube Holden. While a built-up Powerglide could handle the power, Steve didn’t want to drive around with just two gears and they’re not the best thing out on the highway. With six gears to chose from, Steve can slot the ’box into fifth or sixth and cruise to the horizon.

Clutches do get a workout though, and the nine-inch diff up the back isn’t living a stress-free life either. Steve tore the centre out of a clutch plate at Summernats 18 and that put an end to any horsepower aspirations that year.

Eagle-eyed readers might have noted that the Walkinshaw doesn’t look the way it would have left the factory — and we aren’t just talking paint. 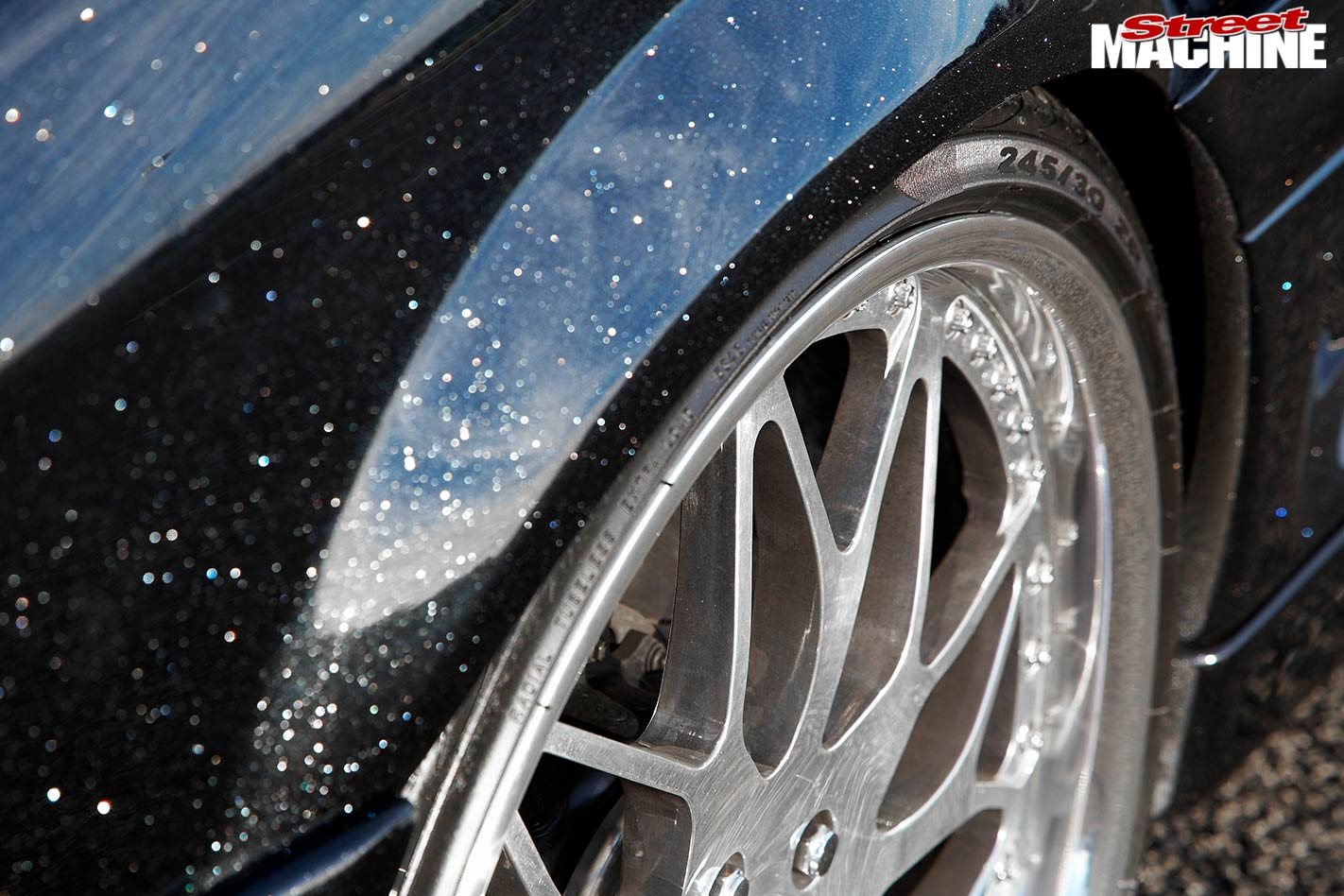 Sure, that House Of Kolor Ice Pearl overlay sparkles like stars on a clear night but what about the VL Calais front? It’s a nice touch on what started life as an original Walky. The front clip was on the car when Steve bought it but the pumped guards, VZ SS guard vents and filled jack points in the bodykit are new. The guys at Specialised Smash Repairs did all the work; they also pumped the guards 30mm so Steve could fit the 20-inch MOMO wheels he recently replaced with the massive 22-inch Intro rims you now see.

Looking over the trim you’ll notice the interior looks a tad different too. Acres of tan leather will do that. Although Steve’s Car and Boat Upholstery (that’s a different Steve) did a lot of the work, Steve (the owner) added a few custom touches. Check out the Toyota RAV4 door handles and armrests — a damn sight better then the original VL plastic armrests, while leather feels so much nicer than factory grey cloth. 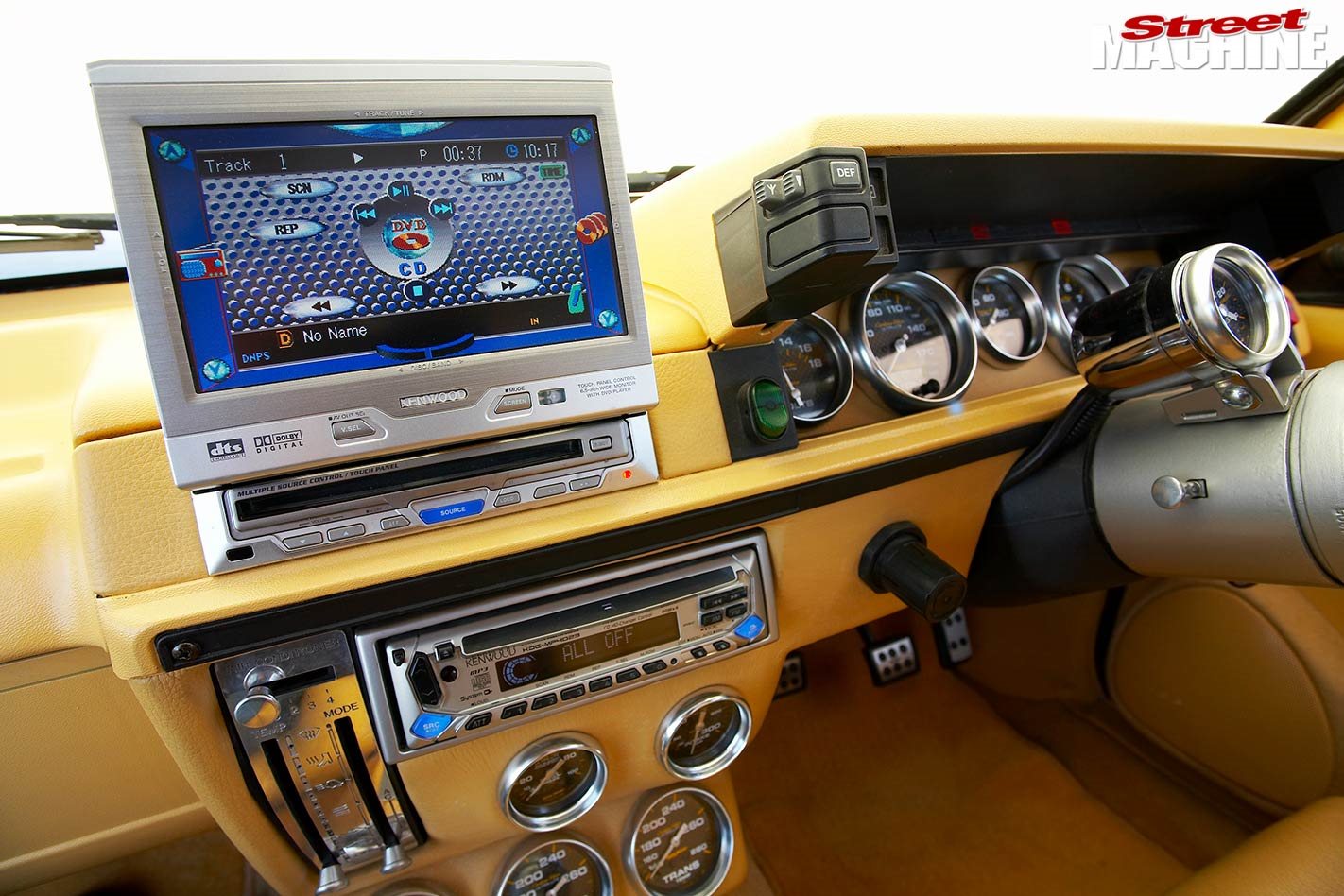 While Steve’s attention is fully occupied harnessing all those horses, his passengers can enjoy a full-house entertainment system. There’s a DVD/TV up front, with an MP3/CD below it, and a massive array of amps, speakers and subwoofers to deliver the tunes. If that isn’t enough, they can always help Steve keep an eye on the 11 Auto Meter gauges mounted around the cockpit. Well they do say information is power — and this car has the power.

“The best thing is to pull up next to a bike at speed and just blow him away, like he’s not even there.”

IT WAS the first vehicle out of Holden’s Special Vehicles division but the VL Group A SS is memorable for many reasons. Never had an Australian-produced car featured such an extensive bodykit, and it was a love or hate affair for most people when they laid eyes on it.

Popularly known as the Walkinshaw (in reference to Tom Walkinshaw from TWR who had significant input into the design) the VL Group A SS was the first injected V8 in an Australian produced car. Pumping out 180kW it was a ball-tearer — back then the carby-fed VL five-litre only produced 122kW so the Walkinshaw was just as big a shock as the Gen III proved to be 12 years later.

Initially only 500 were built but the decision was made to create another 250 after the first 500 were snapped up. It proved to be a bad call — those last 250 cars took years to sell after news of the upcoming VN Group A SS leaked out. Most with the dollars waited to see the VN Group A and then came the recession.

To buy one new cost $47,000 but after a few years secondhand examples were seen for less than $25,000. These days the future’s brighter for Walky owners, with better examples bringing $50,000 or more and a whole new legion of fans who never saw the VL Group A SS race but who love it just the same.