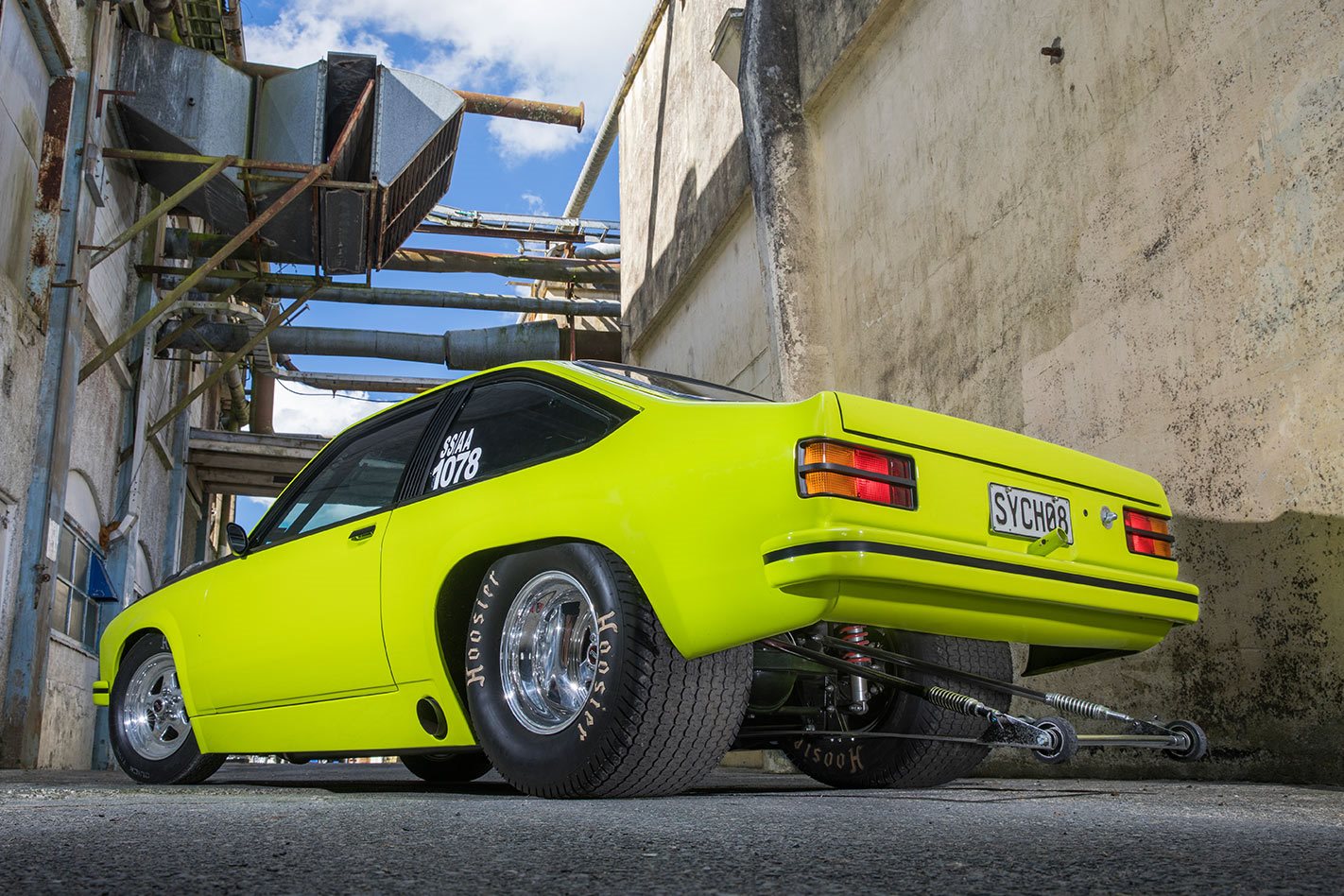 When Aaron purchased the car someone had chopped out the rear guards, so he reattached some stock ones, although they are raised and widened to fit the massive rubber. Up front the wheelarches were raised 60mm, as the car is effectively channelled over the chassis

Admittedly, some of the cars in Street Machine may not see the street too often at all. But before you get out your letter-writing set or pull your smartphone out of your pocket, that’s definitely not the case with this tough-as-nails Torana hatch. It’s a Kiwi car, and on the far side of the ditch the powers that be are a little more reasonable when you tell them you want to register a fully scratch-built car with a twin-turbo 540ci big-block Chev and 14-inch rims out back. 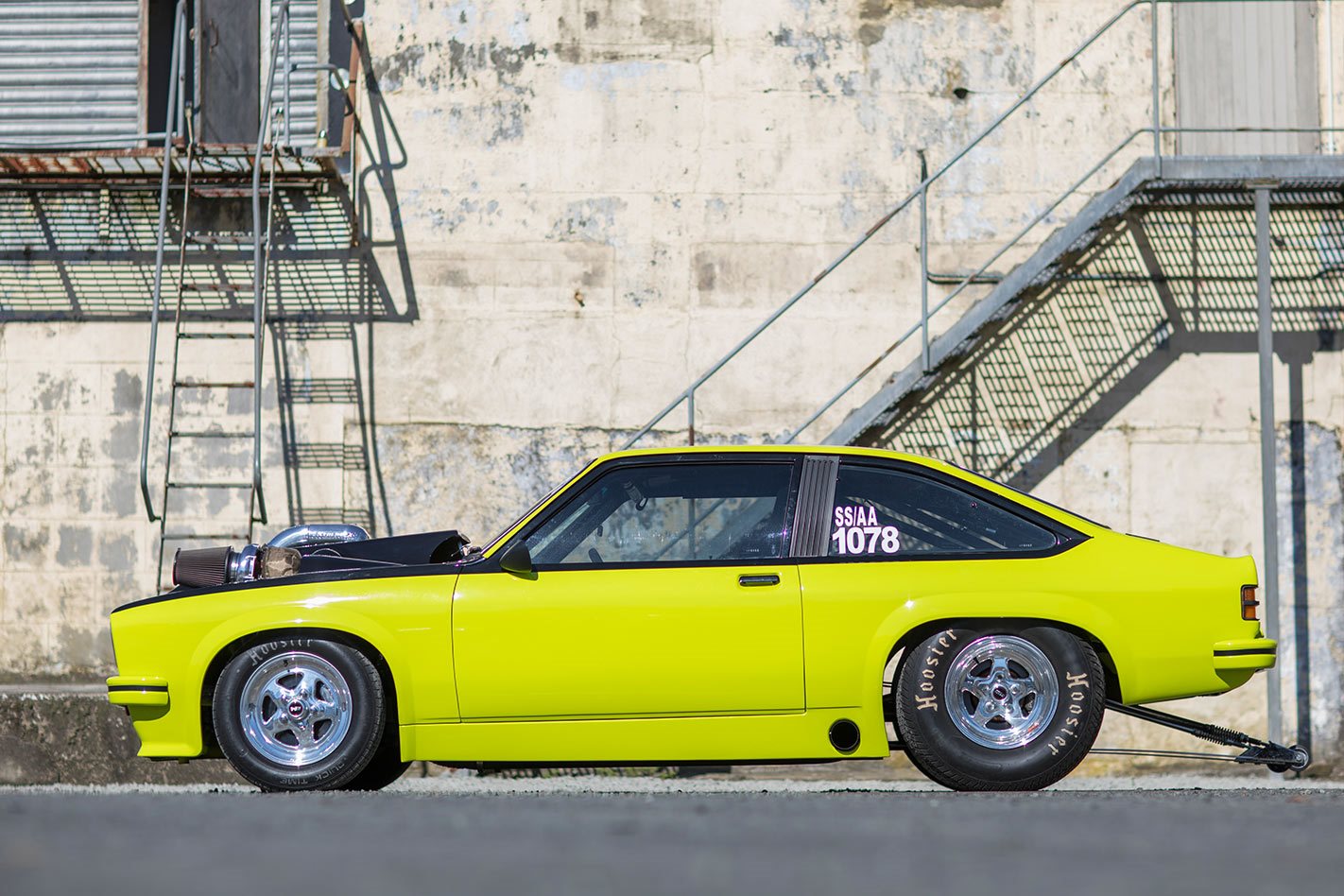 For a bloke that’s a house painter by trade, Aaron Jenkins has done a pretty amazing job of building the Torana from next to nothing. When he got the car it had already been cut up, tubbed and fitted with a rollcage, so it had the bones of what he needed to get started on the build. Well, sort of: “That’s all gone and been replaced,” he admits. “It was easier to make a new chassis and dump the body on it, but I didn’t want to chop one up. It had the important bits and I didn’t have to source too much.” 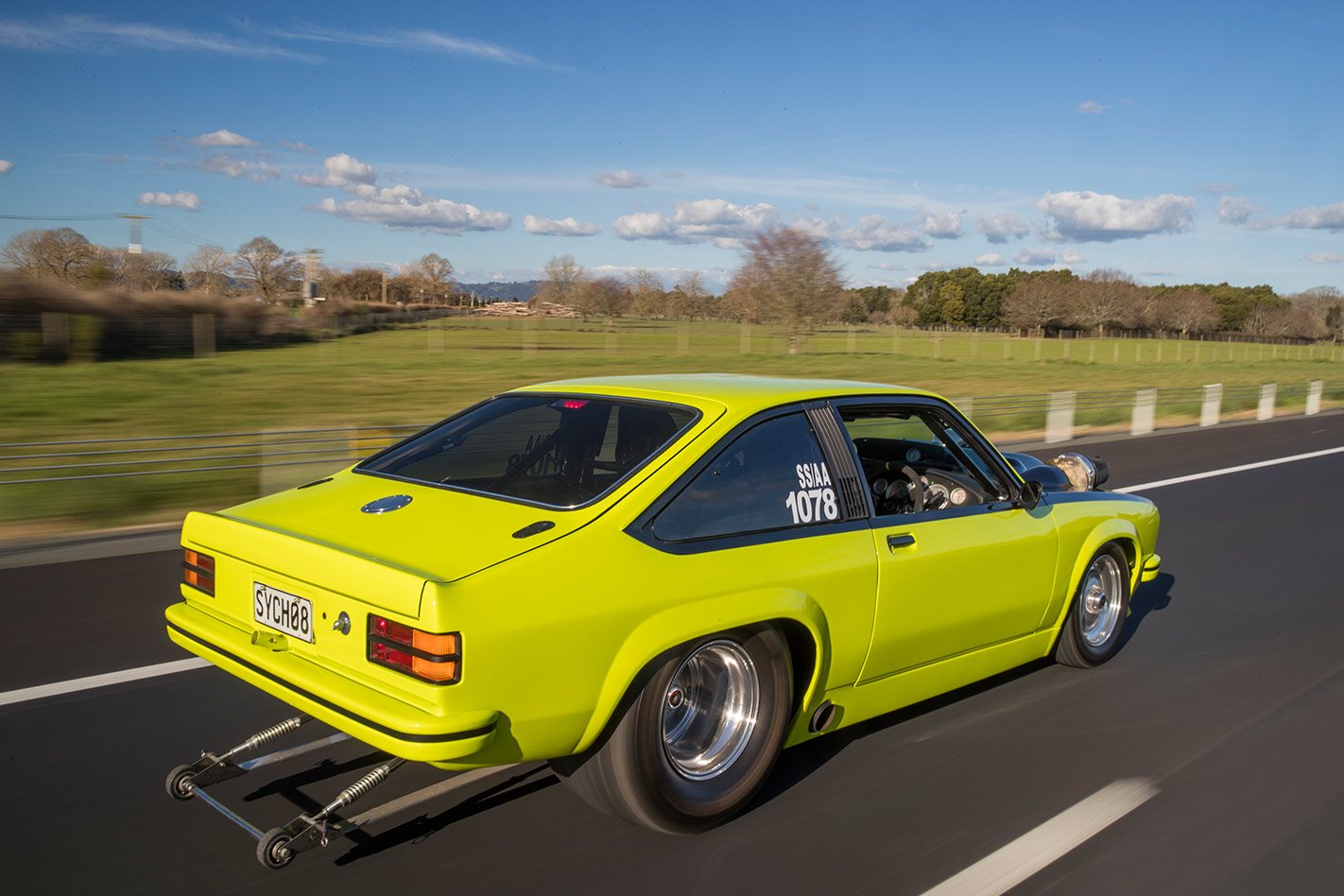 This car looks tough from any angle. Aaron fabbed up some wedge-shaped lower sills to hide the exhaust and eliminate the unsightly seam. Yes, those plates are legit, as are the low-9sec timeslips. Yes, that’s a 14in-wide rim with 18.5in rubber on it, and it’s perfectly legal in NZ!

Aaron did manage to offend some of the WAC (Wrecked a Classic) crowd, but let’s face it, the world doesn’t need another beige six-cylinder Torana SL, and to be honest, there’s not much of it left. “The doors and roof skin are the only original bits of Torana left,” he says. The remaining body panels include a fibreglass front clip, which Aaron has moulded together so the nosecone and guards are one piece, and a carbonfibre hatch. He was trying to keep the weight down as much as possible, but in the end it’s no real lightweight at around 1500kg. 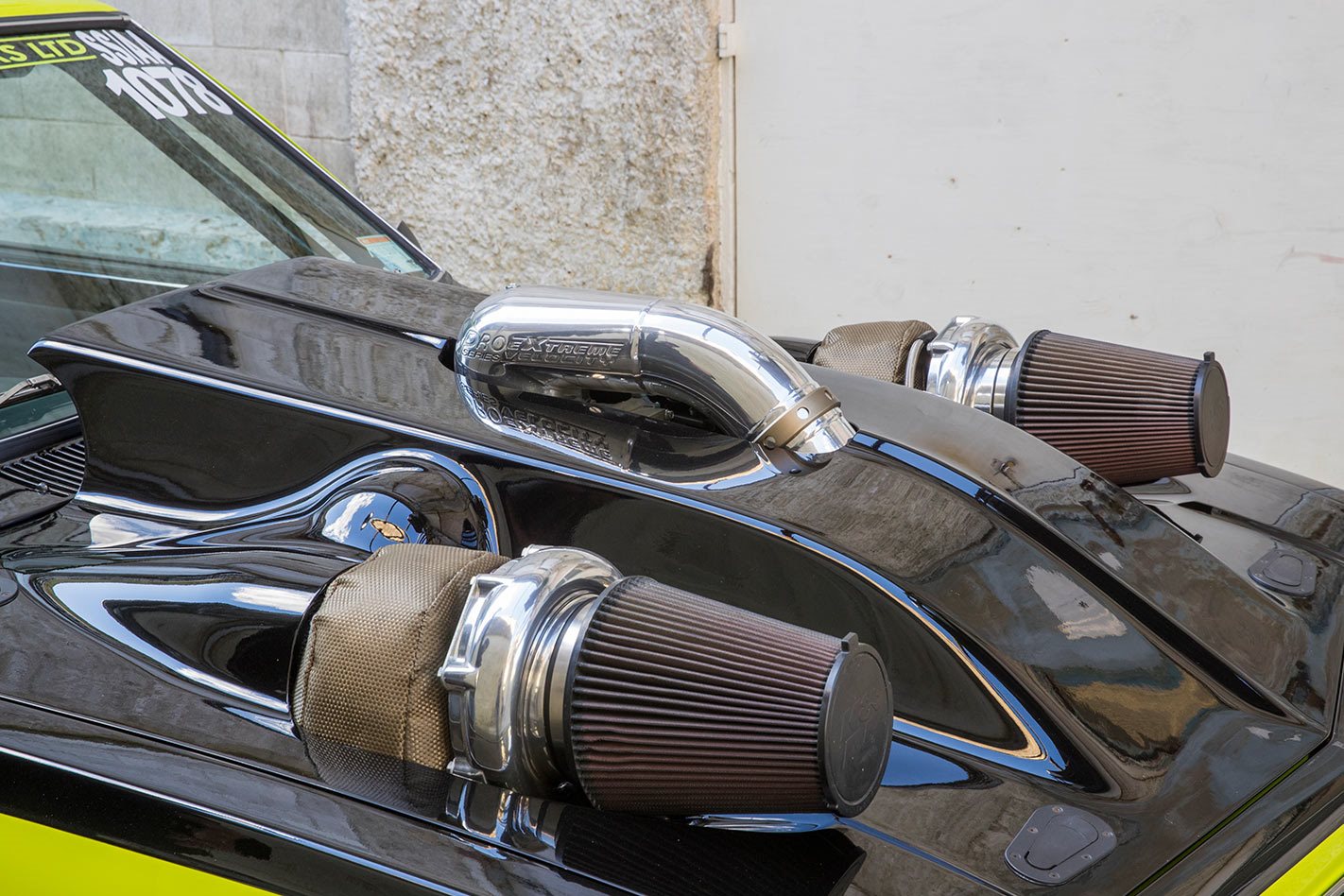 Aaron moulded up his own fibreglass bonnet to cover the bulk of the pipework and most of the engine. Those lumps between the turbos and the reverse-cowl are where the wastegates stick up past the fender line

A lot of that weight can be attributed to the turbos and associated plumbing. “The steam-pipe headers weigh 12kg a side and the turbos are another 15kg, but at the end of the day, it’s what hauls you down the track,” Aaron reasons. 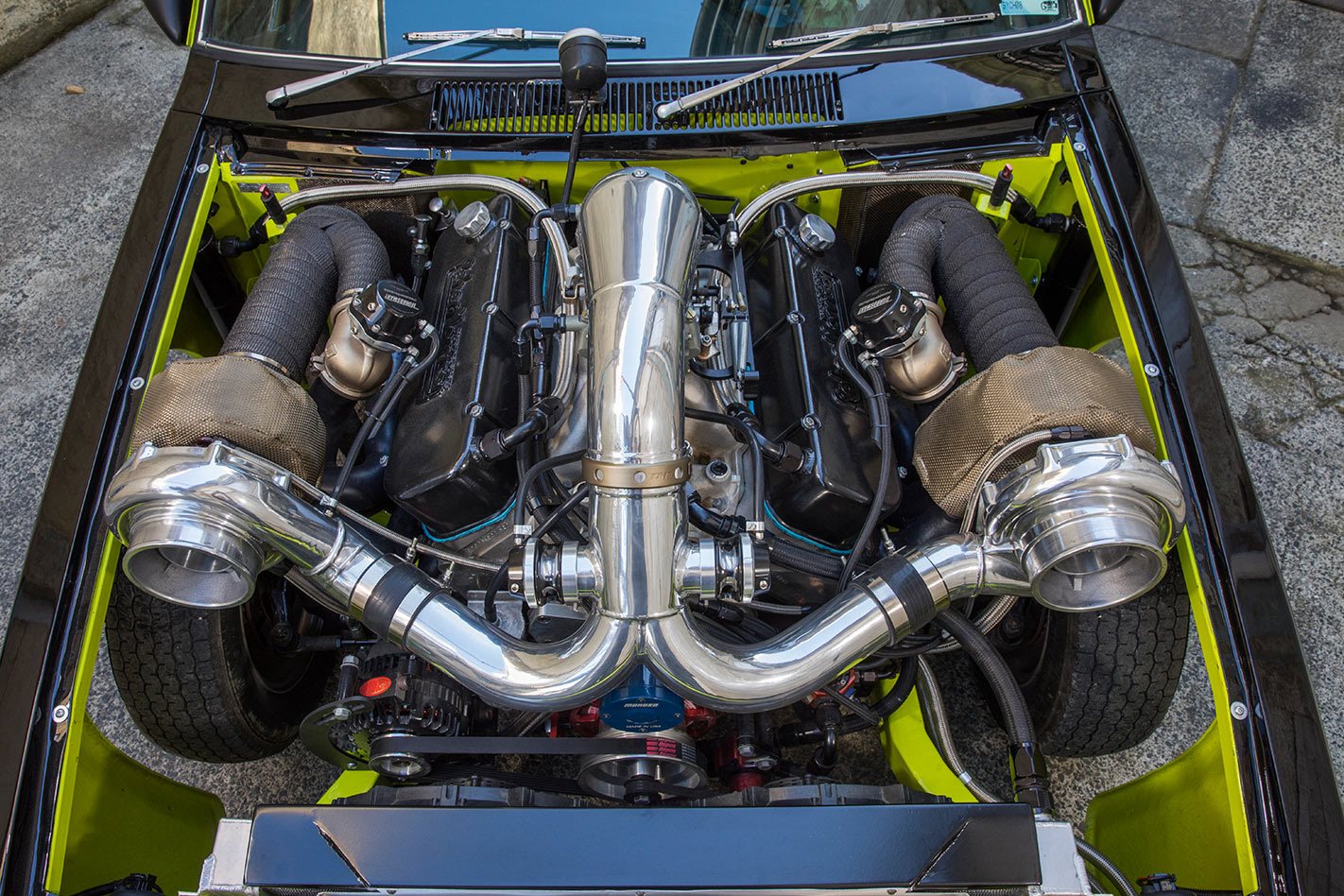 The blow-through carb has no problems supplying the copious amounts of E85 the 540-cube engine needs. Turbosmart got the nod for the 60mm wastegates and 50mm BOVs; currently the stock 8psi springs are installed, which is good enough for 799hp at the tyres

Turbos weren’t always on the cards, though. Aaron had a fair bit of success with his previous car, an HQ Monaro that ran 9.7@141mph and was a full street car; it even had a DVD player so you could watch movies when you were waiting in the staging lanes. “Just a road car,” says Aaron, “with a 496 big-block and a 250-shot of nitrous, no tubs and a full interior.” Yep, just a road car. 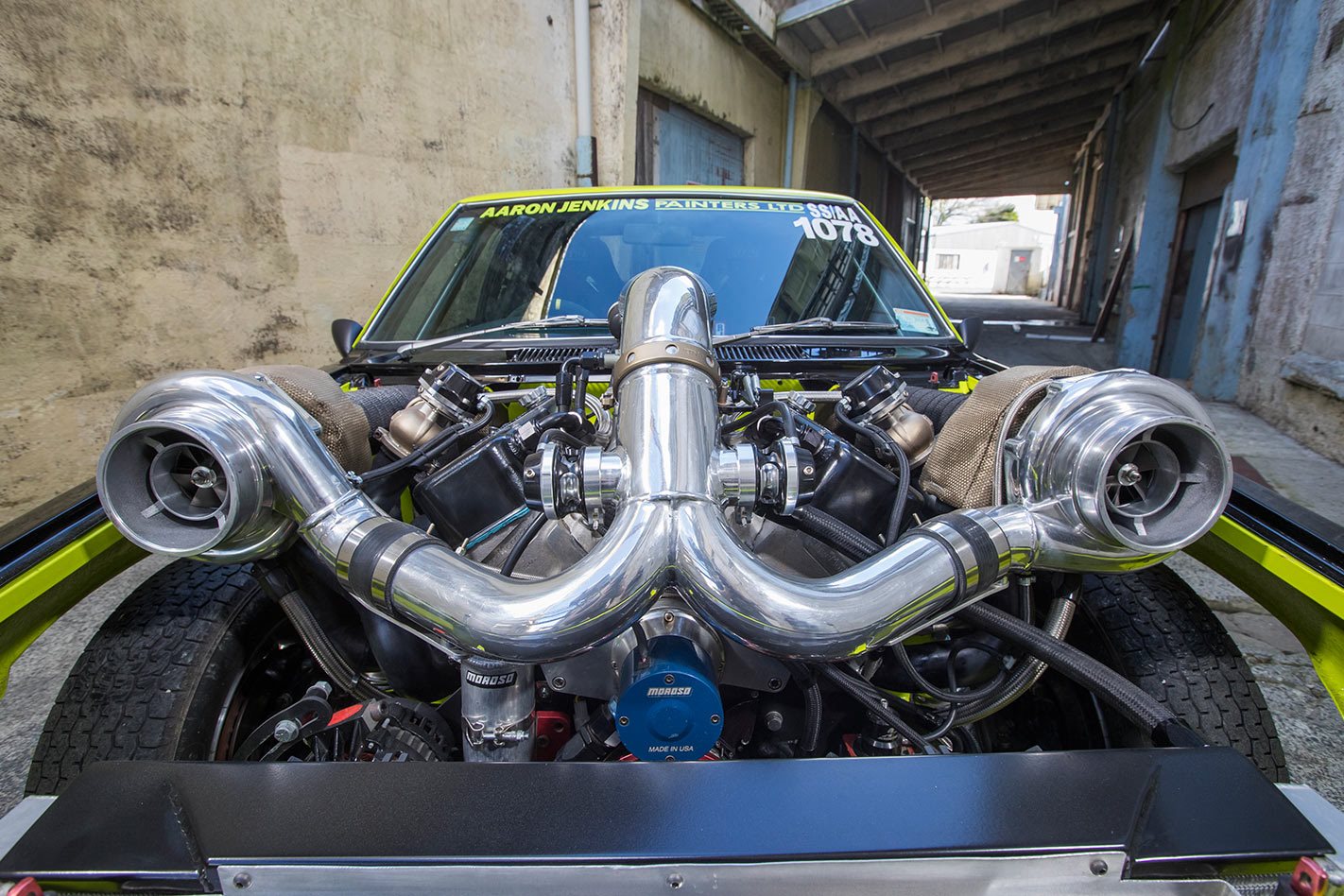 Once the wick gets turned up, there’ll be around 18psi getting rammed into the motor on the way to some 8sec quarter-miles. Lots of header wrap and the turbo blankets make sure the paint doesn’t melt when the snug-fitting bonnet goes on wheels 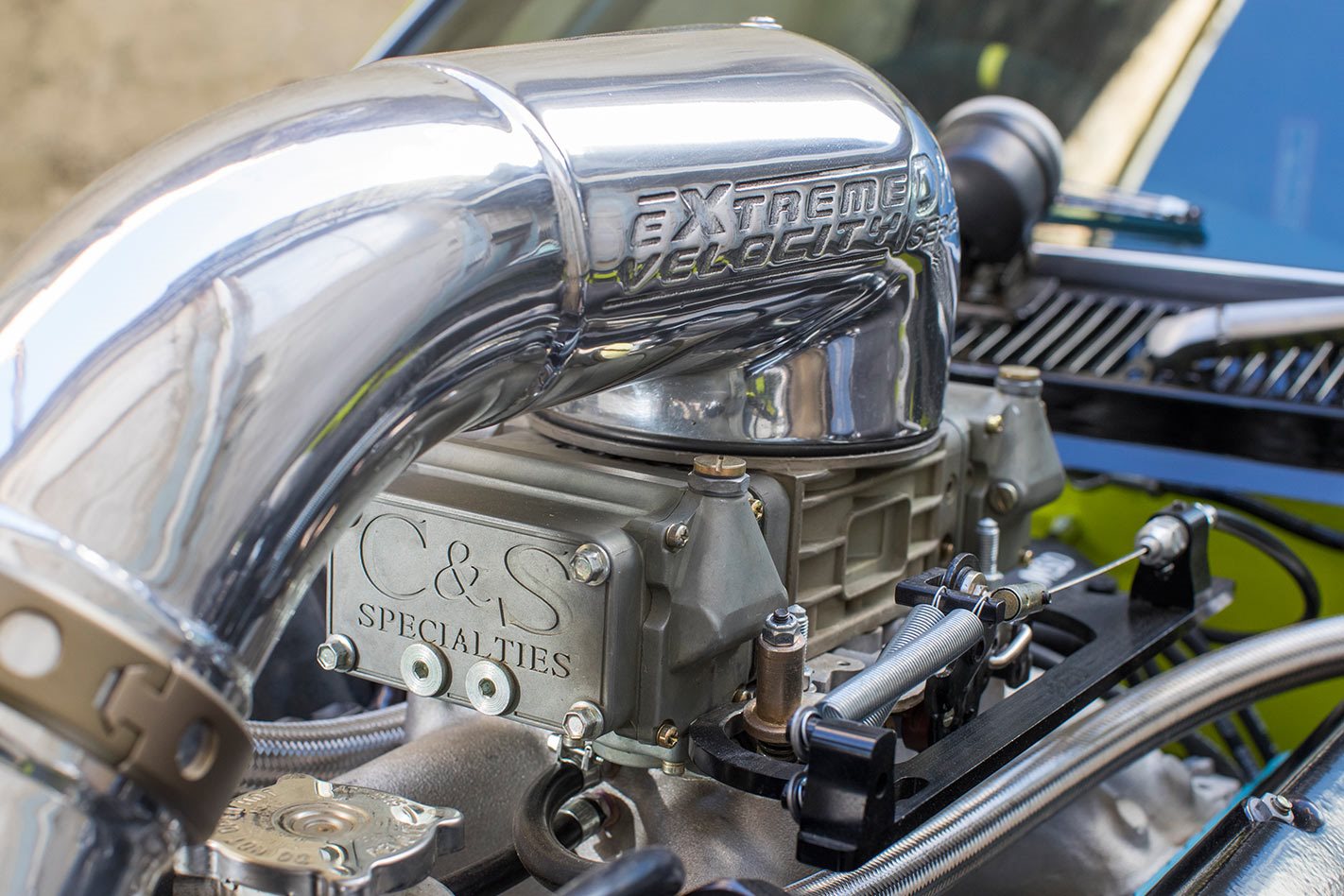 While Aaron took a pretty big leap by bolting on the turbos, he wasn’t ready for EFI yet. “That’ll come, but I understand the carburettor – I can whack it with a screwdriver and it’ll stop leaking,” he laughs. “Even going to turbos, I didn’t know what a turbo looked like before I bought one, it’s just modern Japanese stuff and you make fun of the kids that have ’em – but they’re certainly working!” 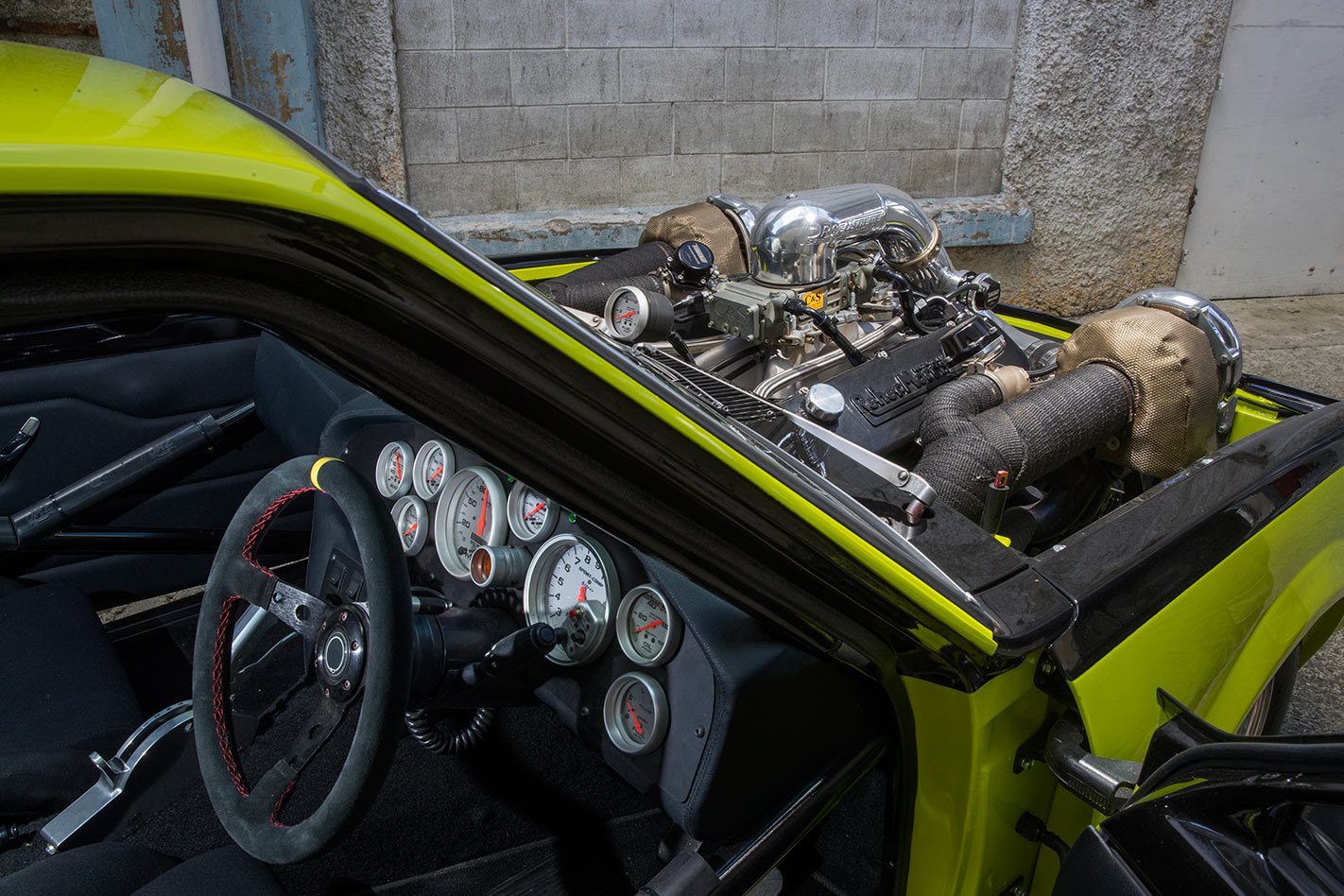 Aaron did think about going with a blower, but he wouldn’t have got it past rego due to visibility issues. Oh well, I guess twin turbos will have to do. There was quite a bit of thought and engineering that went into mounting the engine and intake plumbing, and a lot of it stems from the fact that the car is built on a completely fabricated chassis and Aaron has effectively channelled – or if you prefer, body-dropped – the Torana. He got the car sitting where he wanted it with the Heidts tubular IFS and four-link rear and then sat the body over it, welding it all together so it’s still effectively a monocoque body. “My welding has got a lot better as the car has come along; I’d quite like to start again,” Aaron jokes. “You start underneath and work your way to the top.” 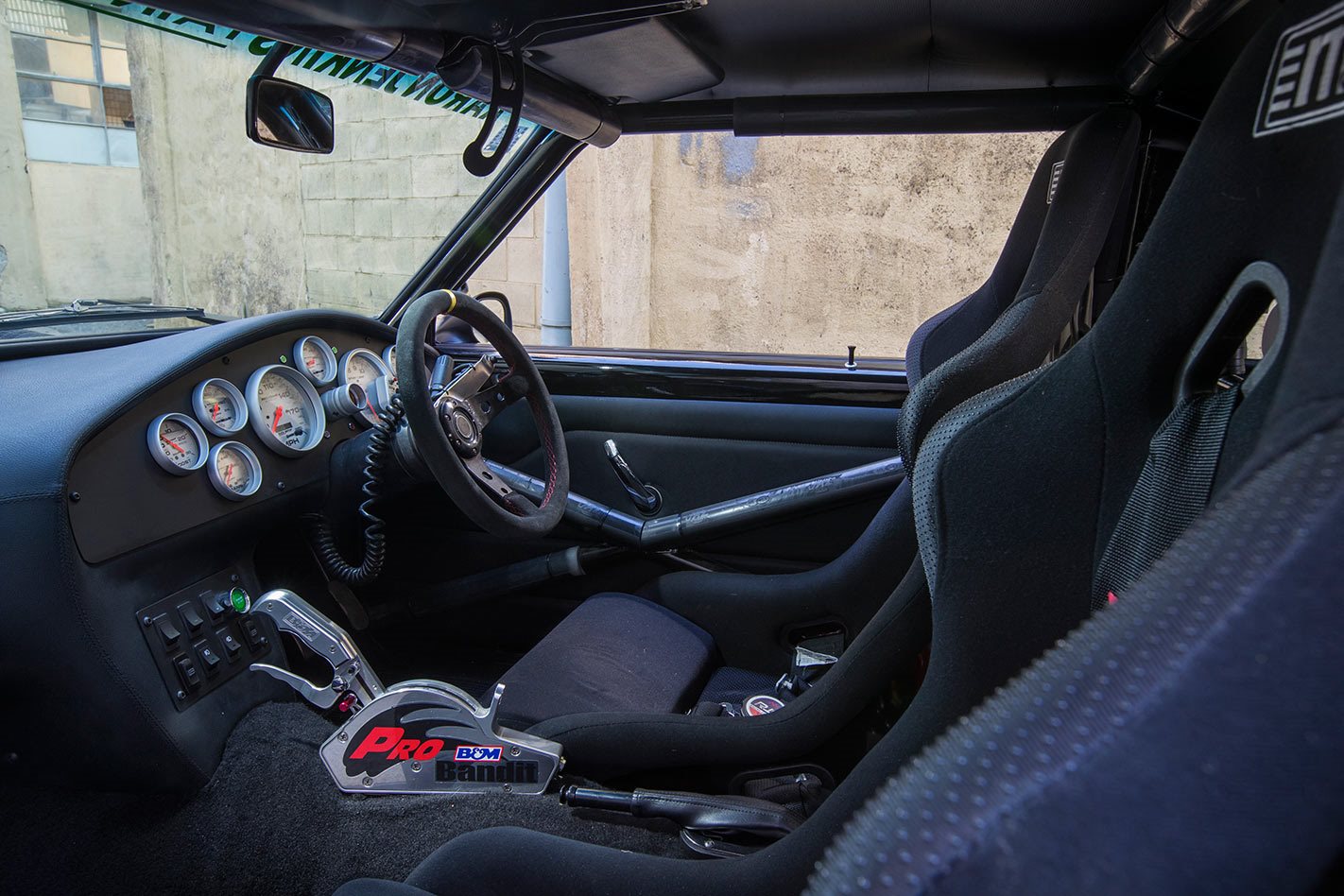 Inside it’s all business, with a hefty rollcage, a couple of race buckets and a fibreglass dash that Aaron cut up to fit. It’s filled with Auto Meter gauges, and a collapsible steering column has been fitted. Safety first!

With the Dart Big M block and Brodix heads, real estate is at a real premium in the engine bay. There’s a perfectly logical reason why Aaron mounted the turbos where he did: “I don’t run any intercoolers yet, but I thought if I saved that corner behind the headlights for later on, I could put a water-to-air one in each corner – and I like shit hanging out of the bonnet. It just looks angrier and upsets people that can’t have it. Like all the Aussies!” 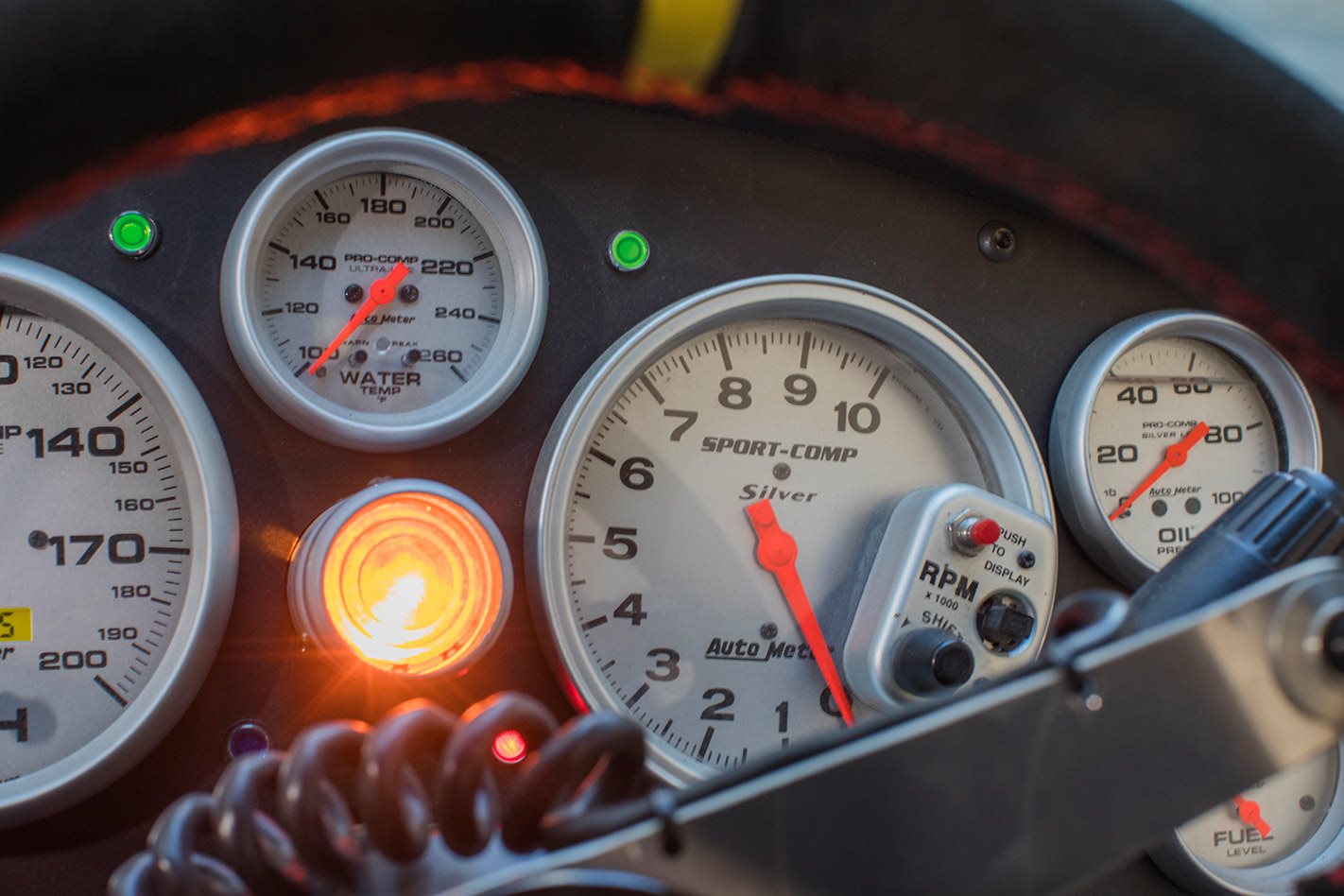 When it came to painting the car, Aaron tackled everything except the final paint. So the underside, door jambs, engine bay and blackouts were all done by Aaron in the shed: “It went off to the panel beaters for the beating and I was going to paint it, but my mate is a car painter and he wouldn’t let me. He just kept turning up with beers, so I couldn’t really say no.” 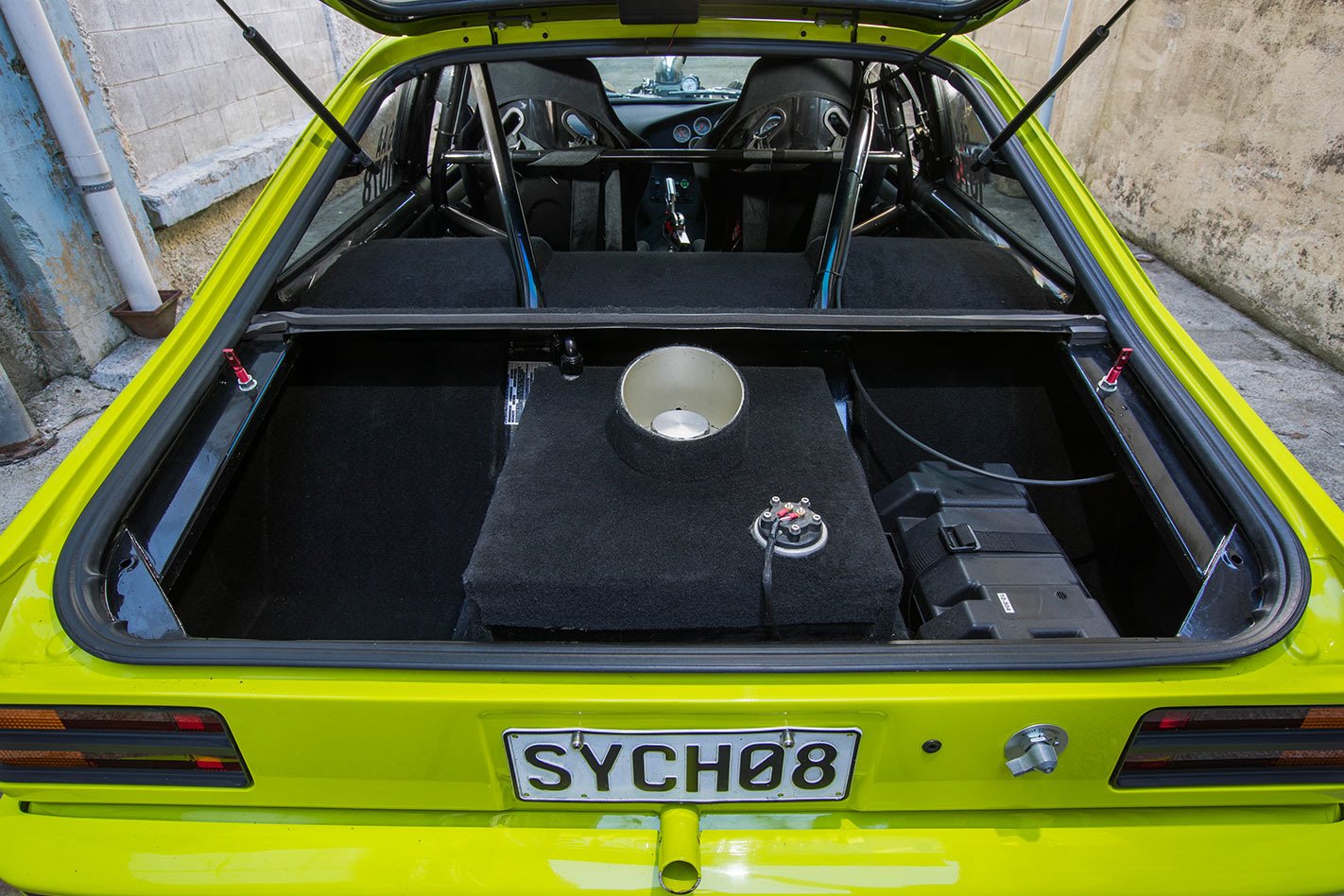 The choice of Barbados Green and gloss-black paint-outs might be an oldie, but it sure is a goodie. Sometimes the factory just got things spot-on.

The whole build is covered online on the ‘GMH-Torana’ forum – all 19 pages of it – and while it took around six years to finish off, that was actually quicker than Aaron had originally planned. “I had a budget; it was $10,000 a year and a 10-year plan. That was my initial goal when I started building the car, and I think I pretty much stayed on budget, but the time has been halved.” Aaron saved a ton of cash by doing everything himself, and with a few good deals landing in his lap along the way, he managed to save a bit of time too. 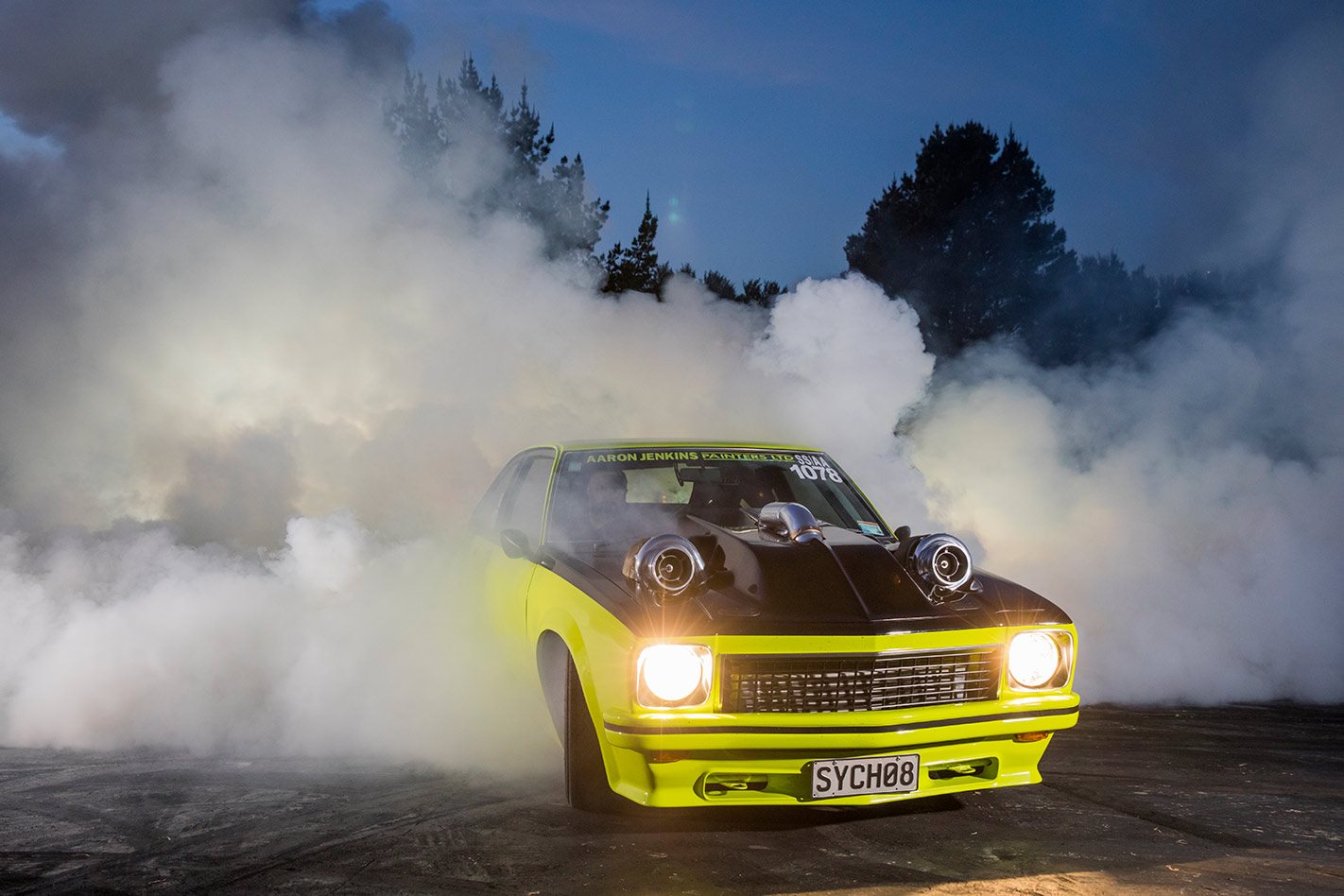 After getting rid of a perfectly good nine-second street car, you would want to hope that all the time, money and effort was worth it in the end. “The first full pass I did was a licensing pass and it was a 9.8, so I was pretty happy that I was in single digits, and was basically where I left off with the Monaro,” Aaron says. “At the end of the day I want to end up around a mid-eight; if it goes any quicker than an 8.40 I’ll be pretty happy.” 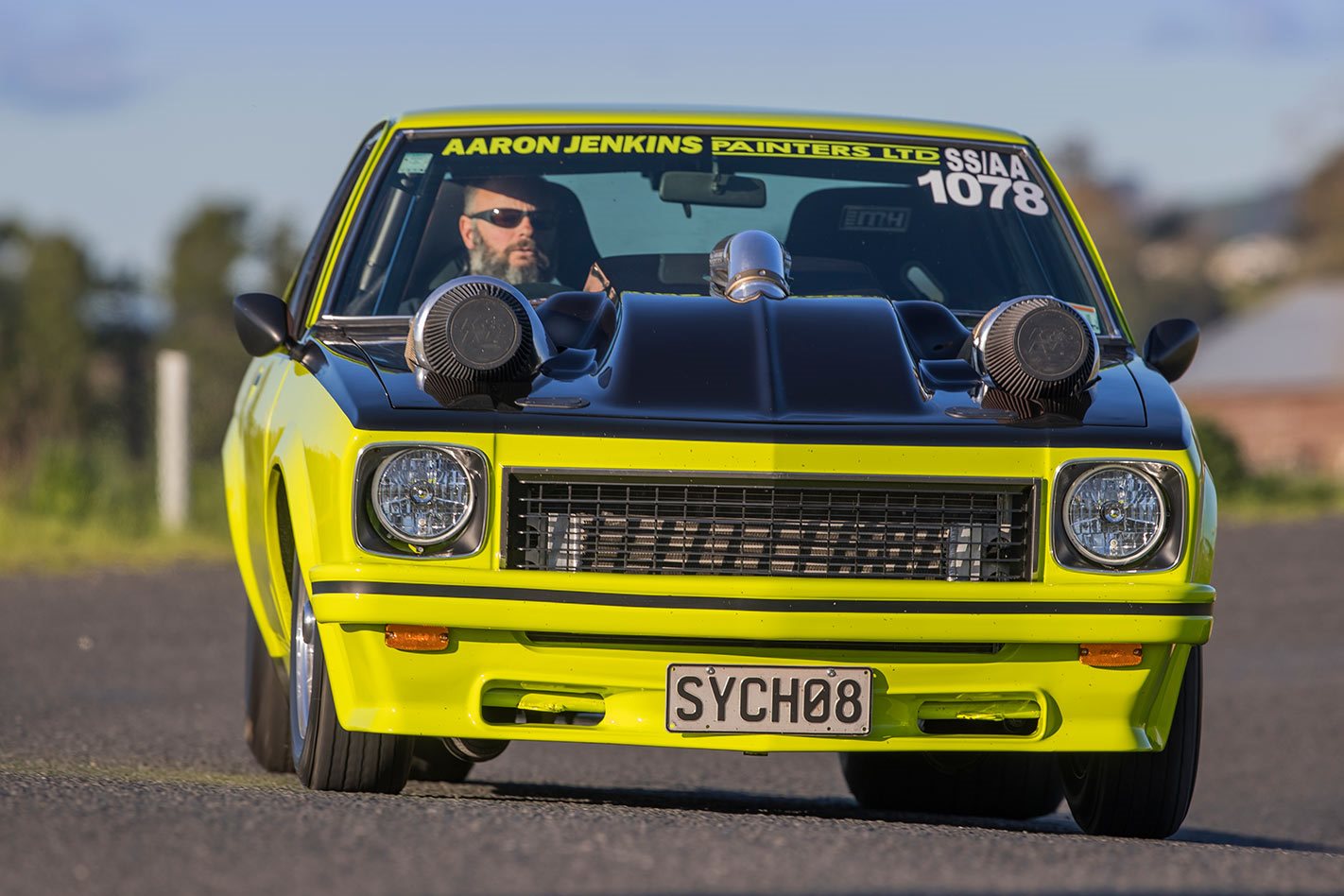 The quickest the car has gone to date is a 9.2@149mph, and that was with a ballooning converter. “I’ve never had a parachute, never had a transbrake, never had wheel tubs – it’s a whole new learning curve with the driving side of it. In the Monaro I was winning the Aussie Car Shootout at the Father’s Day Drags running a 10.0. In the five or six years I’ve been gone the cars are now in the mid-to-high eights!”

With just 8psi in the tune-up at the moment, there’s plenty more in the tank of SYCH08. Look out, he’s coming up fast! 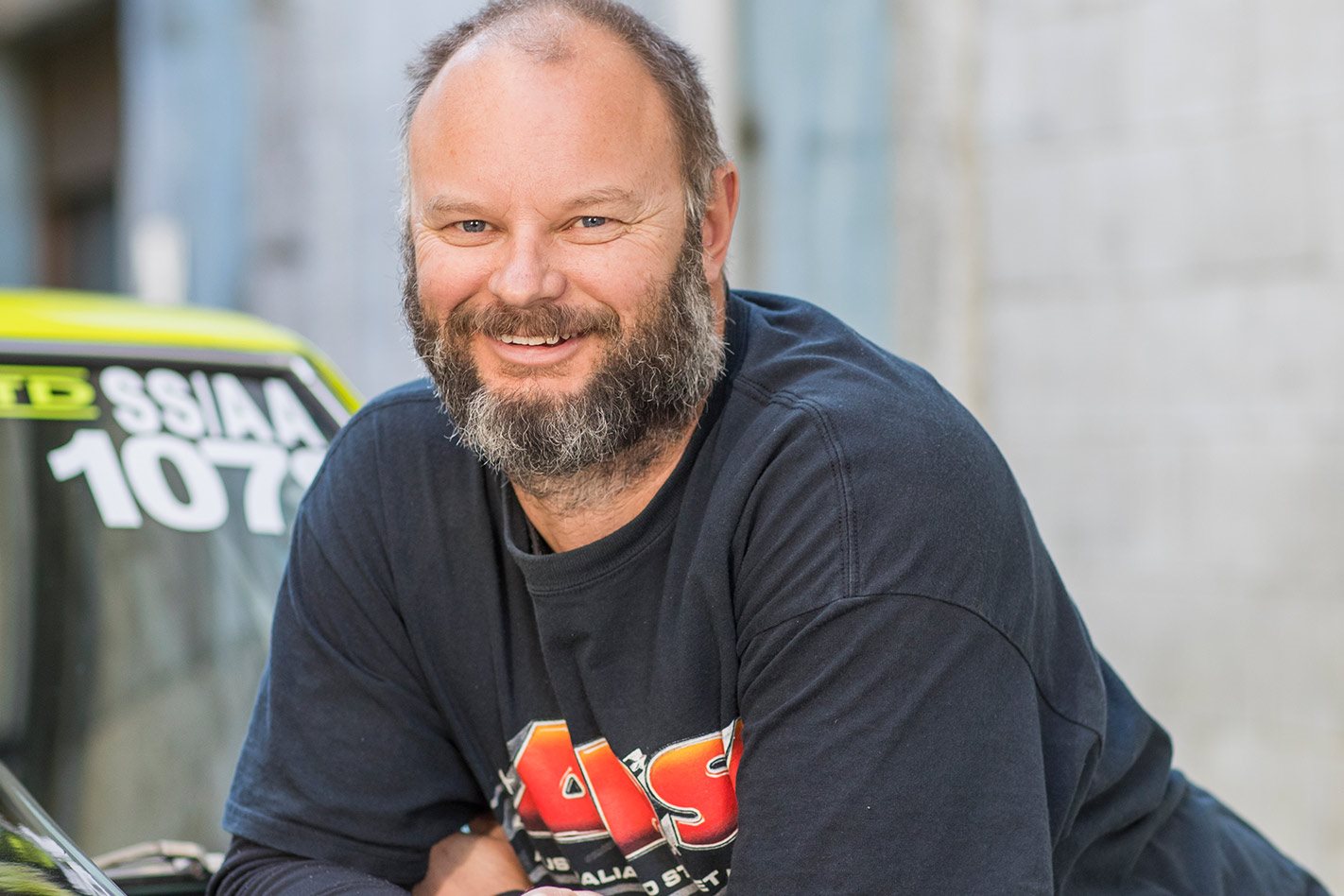