With a Hemi under the hood and a tough, classy exterior, Blake Fardell's XY is the best of both worlds

I WAS ready for all the haters,” says Sydney’s Blake Fardell, proud owner of this exquisite XY Falcon, BIGQBS. “I thought they’d all attack me for putting a Hemi in a Ford. But it didn’t happen – the car has been really well received, the feedback’s been phenomenal.” 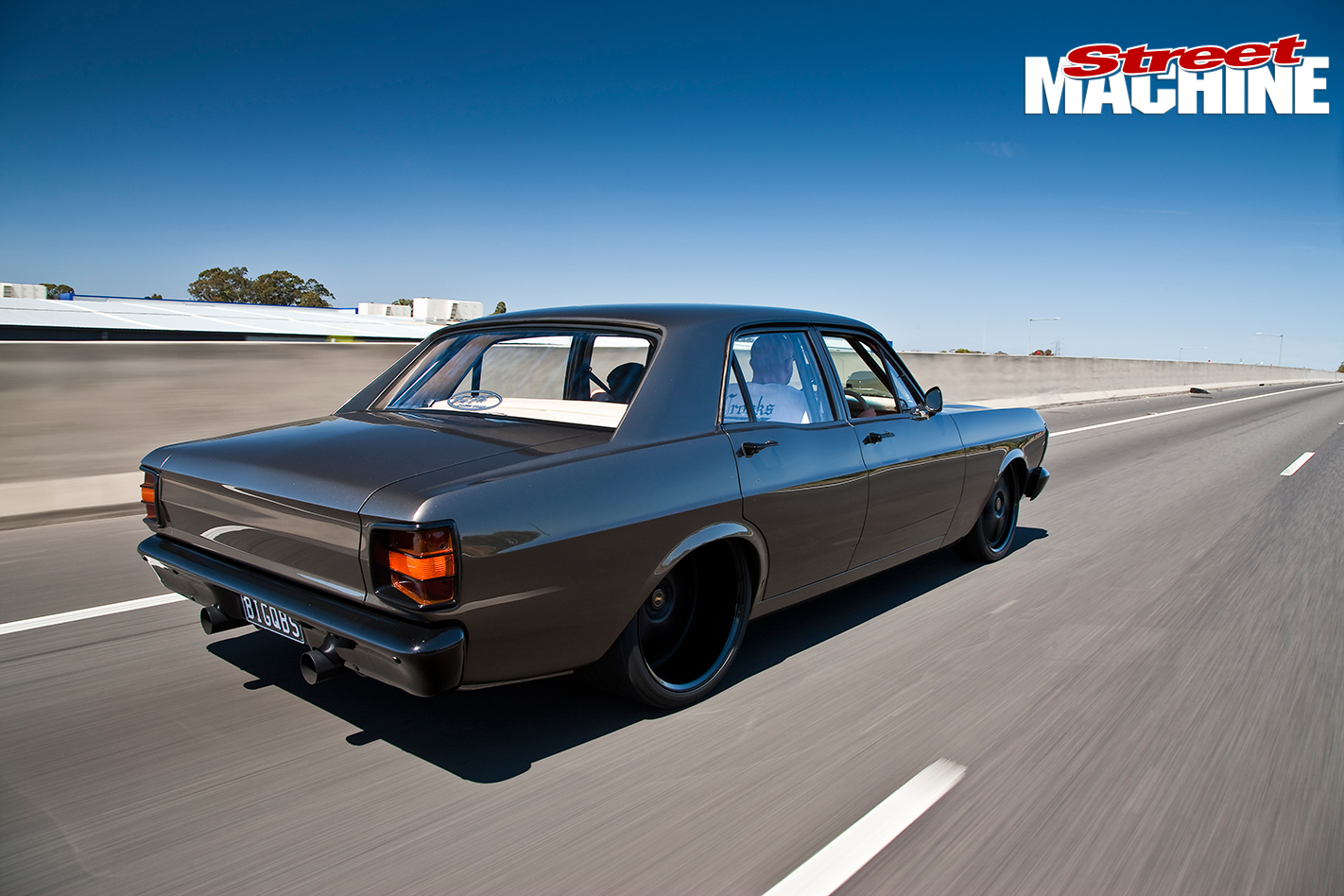 BIGQBS is a bonafied XY, but it's fitted with XW tail-lights which better suit the mould-less bootlid

As Paul Sant from ProFlo Performance says: “Everybody loves a Hemi. It’s universal; it’s not a Chrysler, it’s a Hemi.”

Those who know their FoMoCo iron will be aware that a Hemi will not fit between an XY’s shock towers. That’s not a problem with BIGQBS though, as it doesn’t have any. While you may think the fabrication shop at ProFlo ditched the towers to accommodate the wide-block, it’s not so. 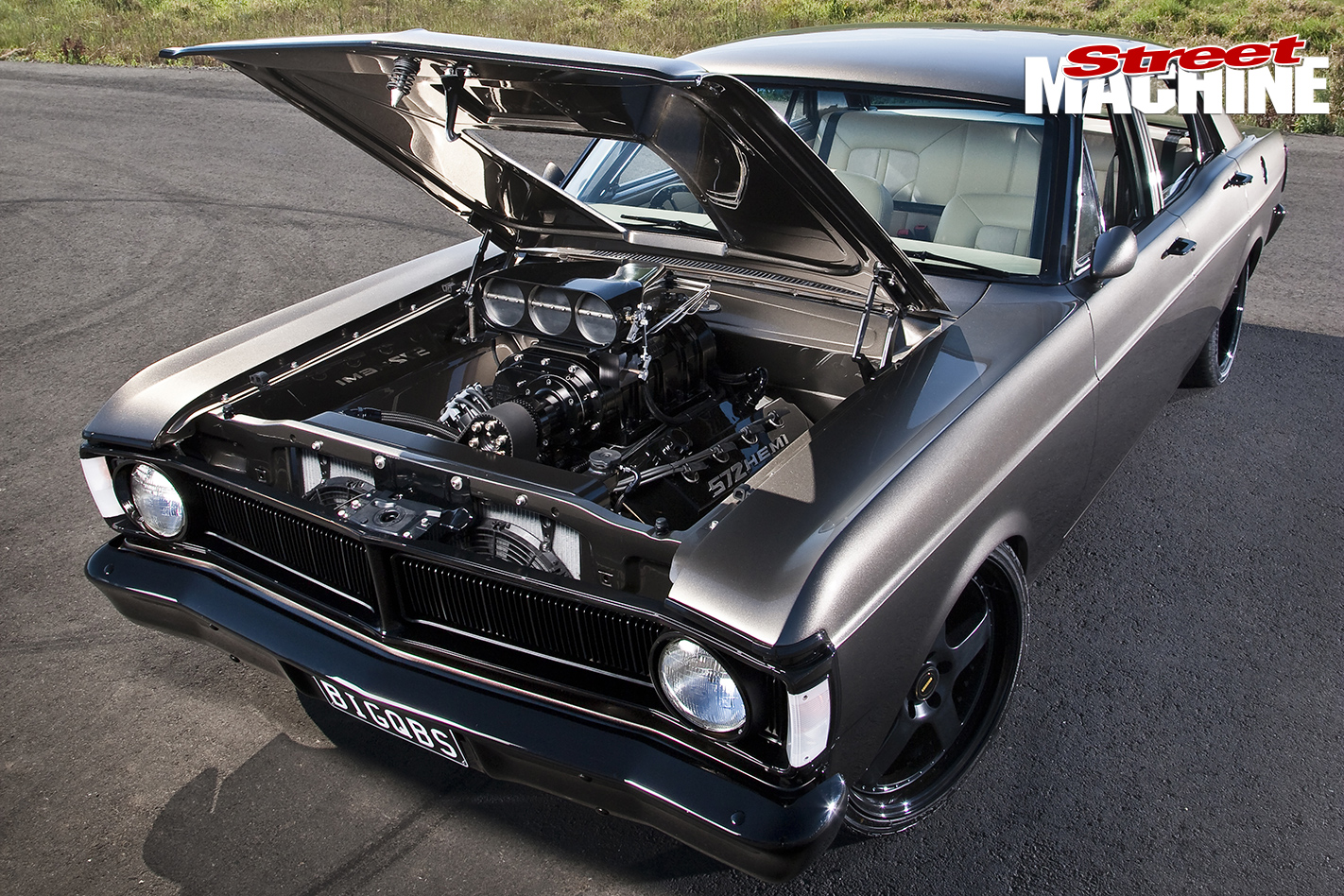 “I wanted it to drive really nicely,” Blake says, “so I bought a McDonald Brothers universal twin A-arm front end.” Their coil-over set-up retains the Falcon stub axles, but improves geometry via redesigned control arms and pick-up points, while using a VL Commodore rack. ProFlo has set up the front end to tuck the front tyres, allowing the Aussie Falcon to sit on the deck without fouling the guards. The beauty of retaining the XY stubs is that they’re the same architecture as a Mustang, allowing an off-the-shelf Wilwood Mustang big-brake kit to bolt straight up – anchors sorted! 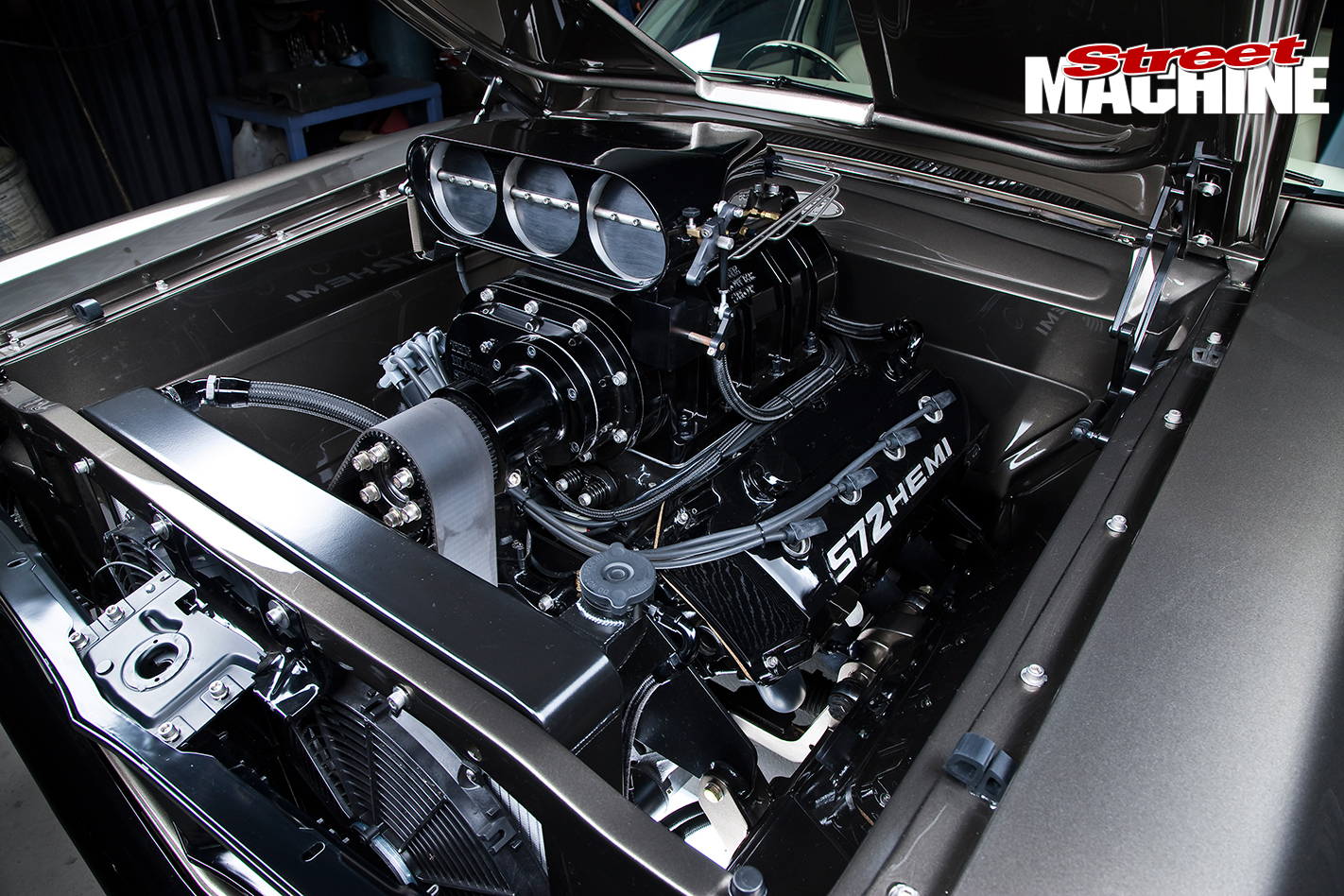 After grafting in the front end and sheeting out the engine bay, which included smoothing off the firewall, it became immediately obvious a small-block was going to look lost in there. Out came the tape measure, which indicated a Hemi would be a perfect fit.

“Blake took a lot of convincing to go the Hemi,” Paul says. “However now the car is finished he’s very happy.” Even so, a big-cube Ford mill was also costed out – and surprisingly the Hemi came in cheaper! 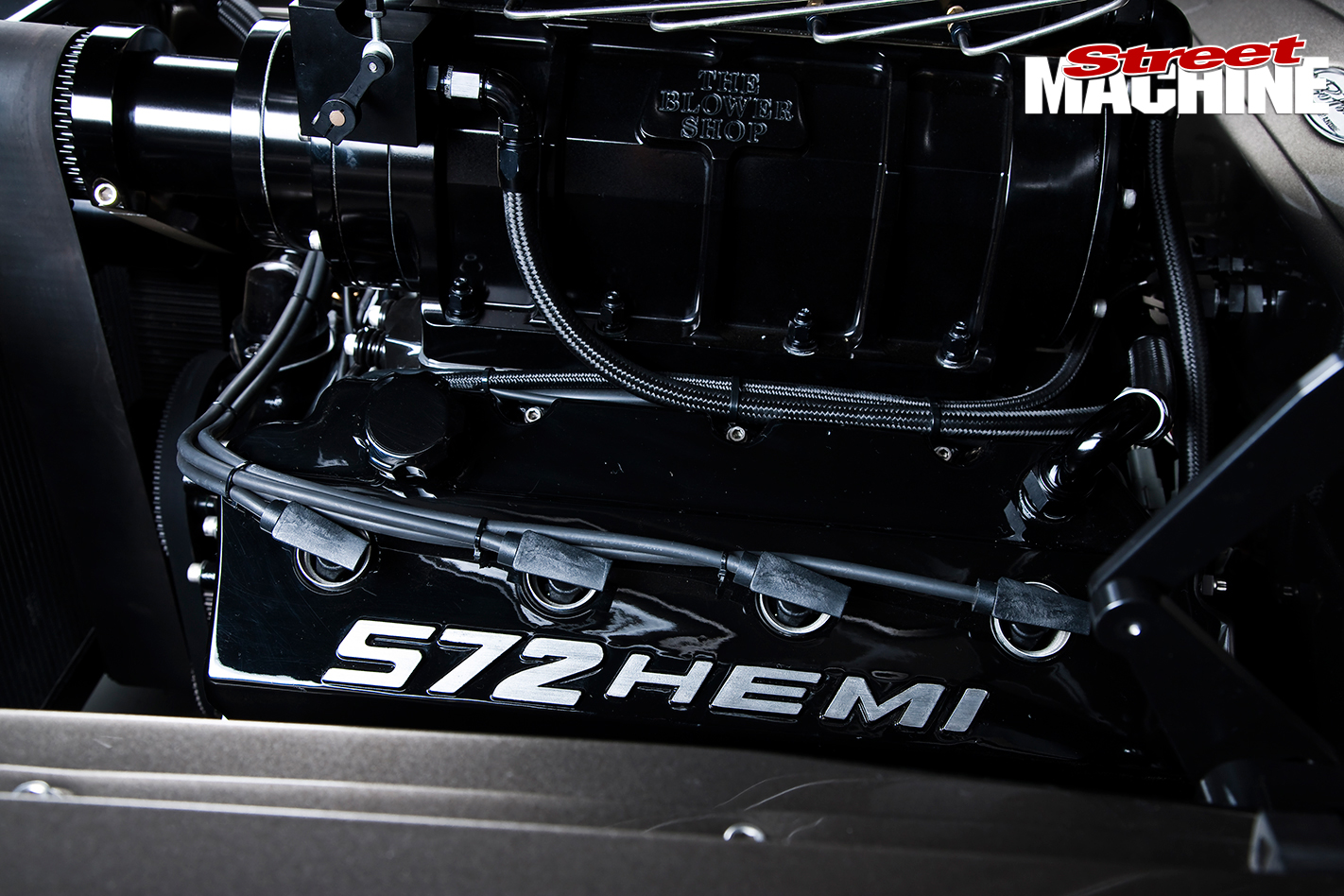 So what is this void-filling mill that ProFlo screwed together? Starting with a World Products block, they added an Eagle crank, H-beam rods and 9.0:1 Arias slugs. Bore and stroke is 4.50 by 4.50, which is a popular combo for big-cube Hemis. Getting air and fuel into the 572 are a Comp Cams hydraulic roller, ported Edelbrock alloy heads, BDS inlet manifold, 8/71 Blower Shop pump and Enderle Bird hat that has been converted to EFI. For headers, ProFlo started with a box of mandrel bends, which were cut and spliced into a set of four-into-ones featuring 2.25-inch primaries dumping into a dual 3.5-inch system. 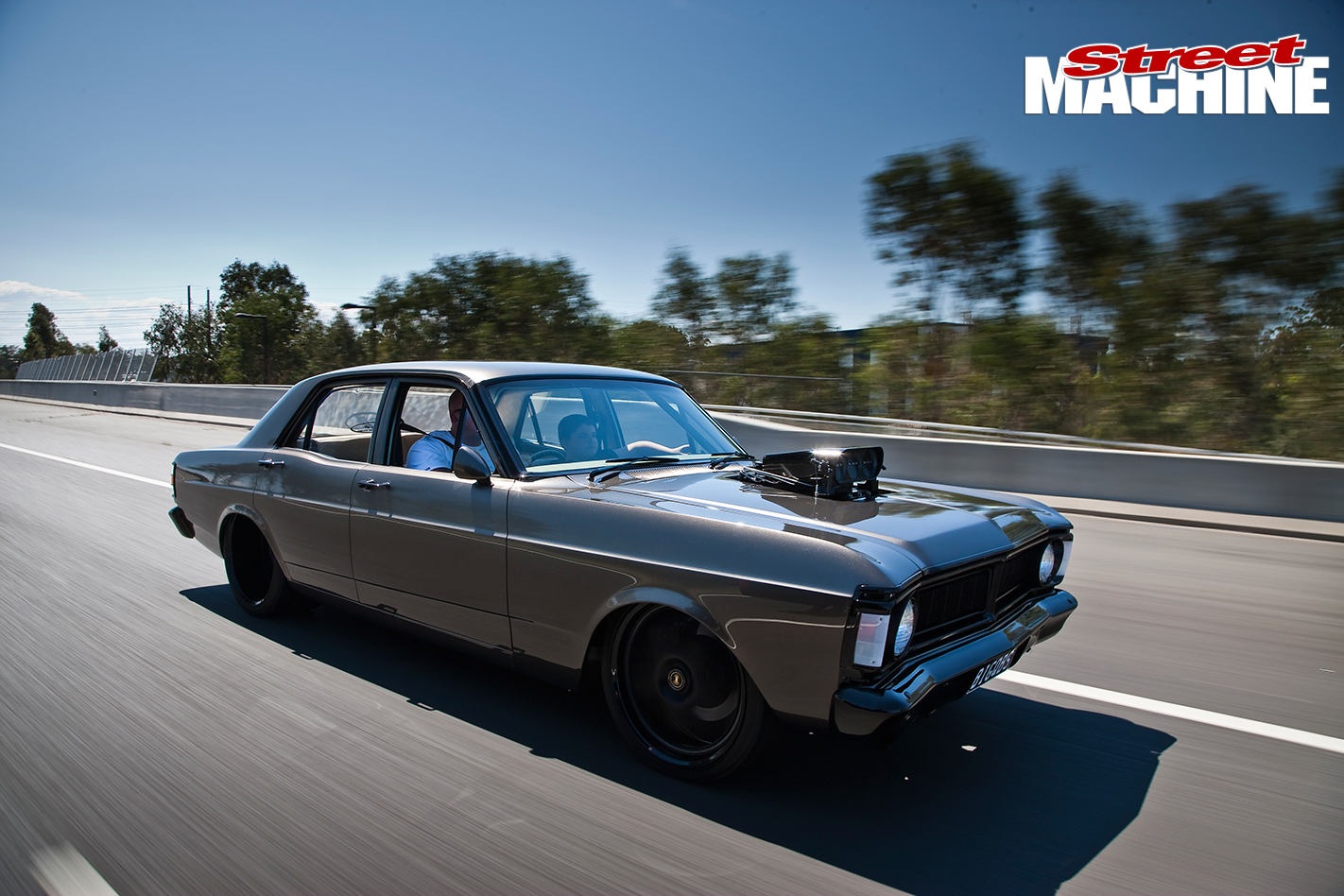 "It drives unreal," Blake says, "It's really nice, doesn't scrape and I don't have to go around dodging potholes"

The boosted 572 makes 765hp at the treads on just six pounds of boost. That’s a tad shy of 1000 horses at the flywheel, yet everybody comments on how sedately the car drives. The combo still has tonnes in reserve and could easily be turned into a weapon of mass destruction by winding the wick up to 18-20psi! 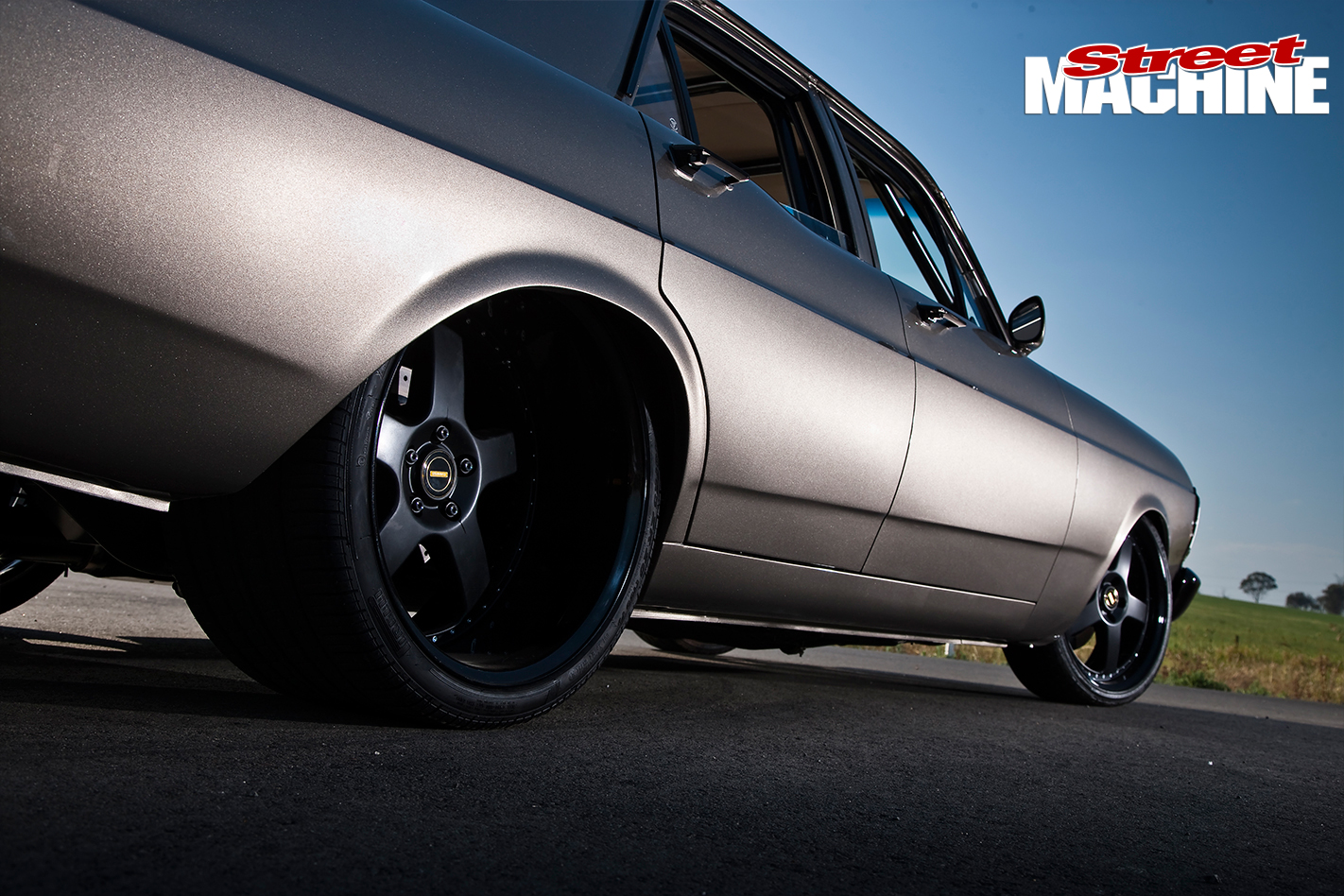 The next most obvious departure from stock is those ultra-deep, 20x12 FR Simmons wheels wrapped in even wider 345/25/20 rubber. To accommodate the rolling stock, ProFlo fashioned a narrow sheet-metal nine-inch and suspended it using a triangulated four-link and QA1 coil-overs. The four-link’s bottom bars slot into the original leaf-spring mounts, while the angled top arms anchor to the Falcon’s chassis rails. 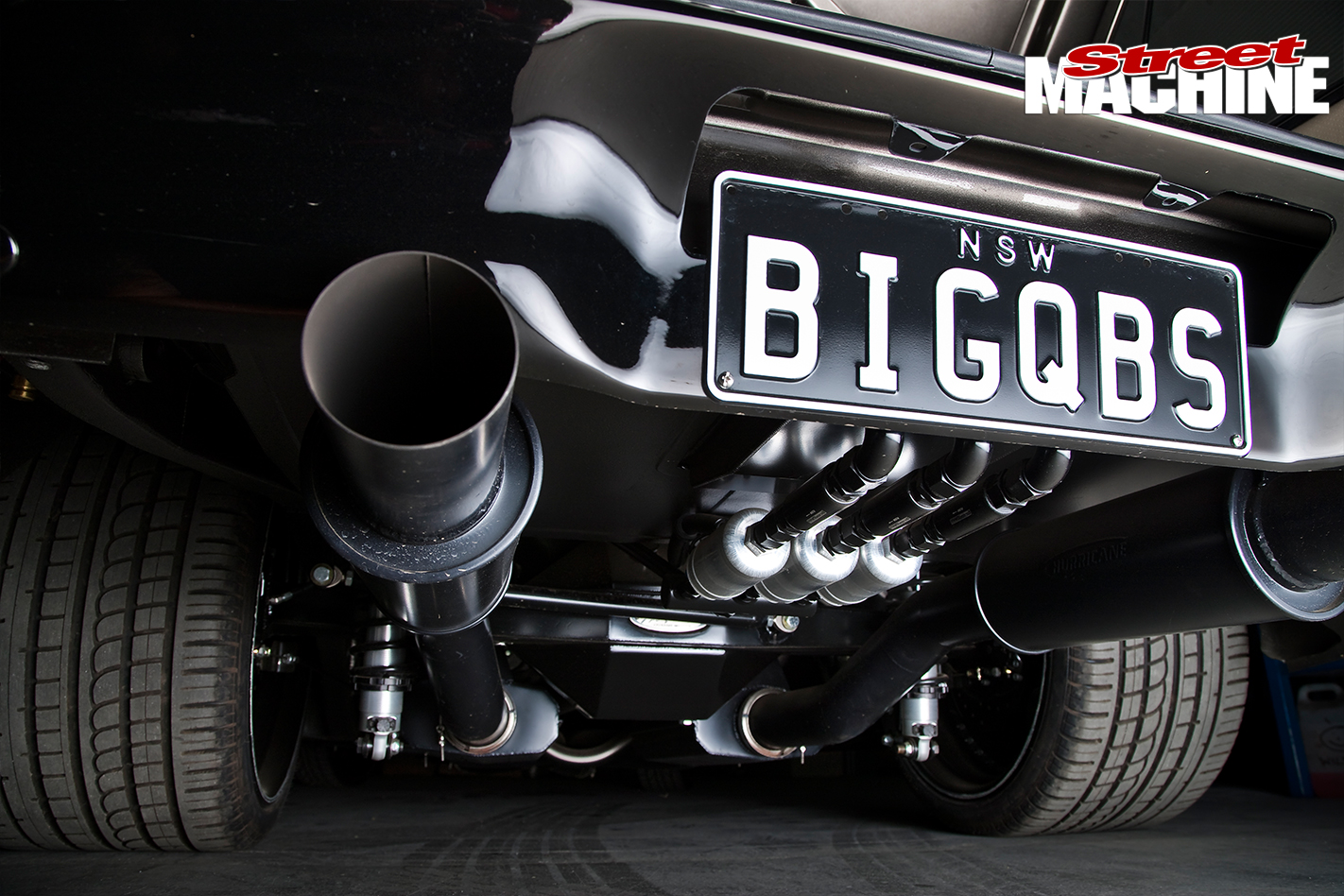 Incorporating this set-up required more metal surgery, which combined with the raised tunnel means there’s not much of the car’s undercarriage that hasn’t been massaged. All the added sheet-metal incorporates matching swage lines. These are not just for show; the swages add considerable strength to the panels.

There’s no arguing BIGQBS’s engine and chassis combo is as tough as they come. It was then time to address Blake’s other prerequisite – it had to ooze class. 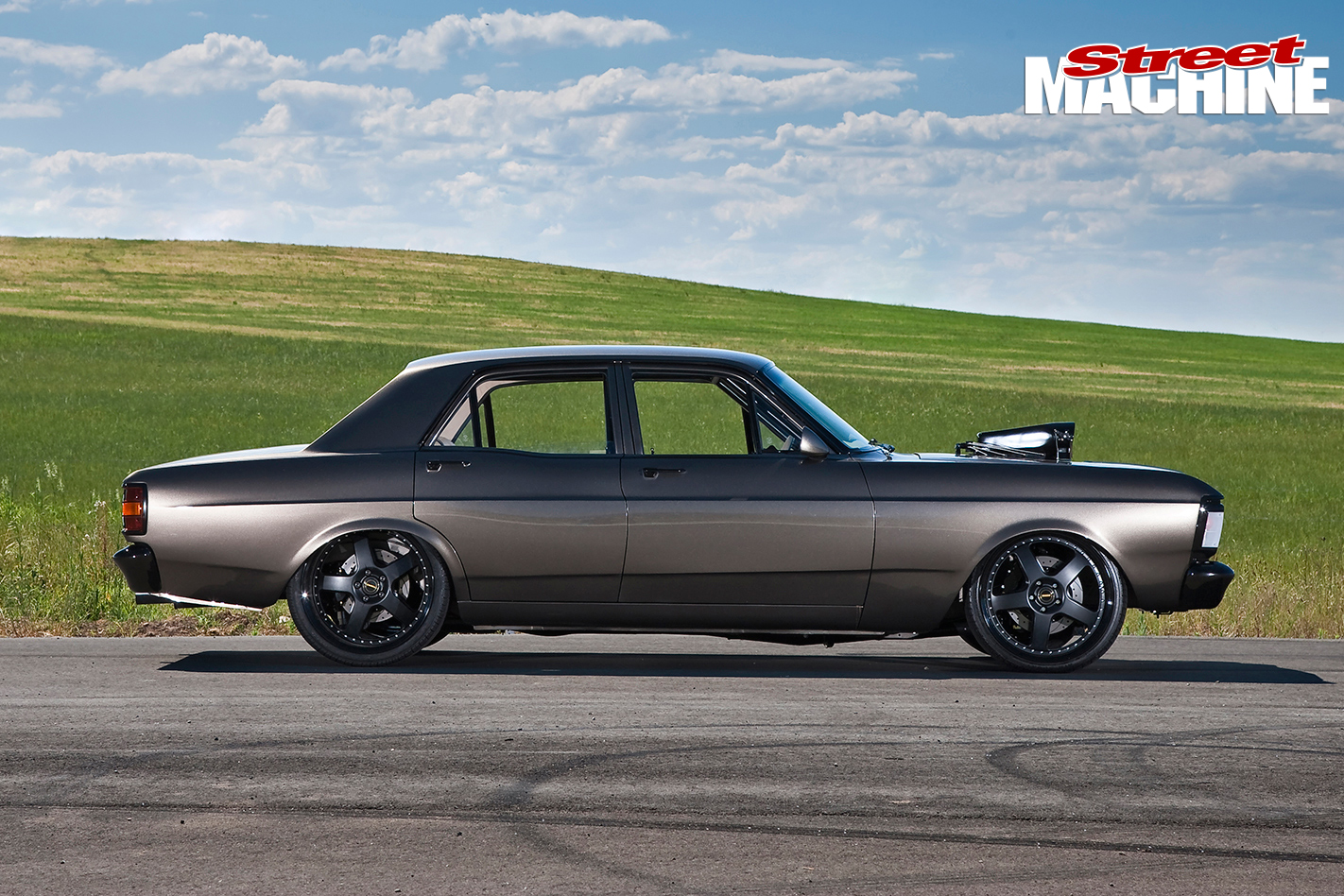 Kingpins Kustom Paint toiled for untold hours massaging the XY into shape, before laying on that spectacular House Of Kolor Galaxy Grey. An equally big task was painting everything else black, which was a world first.

Doing the all-black deal was a total pain – the blower is a great example. New out of the box, it had to be disassembled, various parts painted, others anodised, bolts plated and then all reassembled without scratching anything. Multiply that by hundreds and you have some idea of the effort involved. Blake was adamant he didn’t want BIGQBS to look like another GT replica. The tough, sexy Galaxy Grey hue, black trim work and a blown Hemi is about as far removed from replica as you can get. 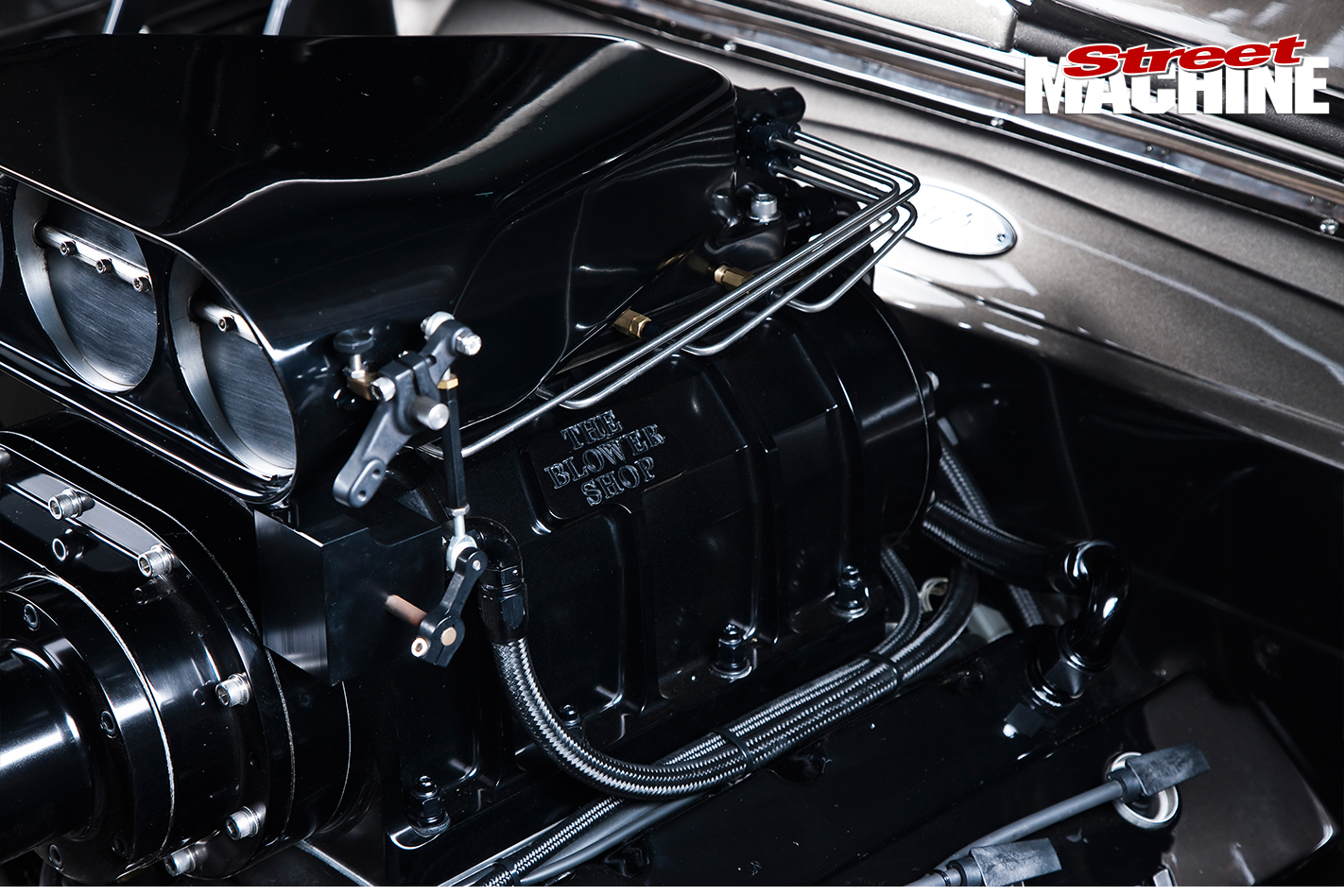 All the black on Blake's XY was achieved with a unique new product called Ultimate. BIGQBS was the first car in the world to use the innovative new finish

When it came to the inside, Blake became acutely aware of the downside to basing his blockbuster build around an XY Falcon – one of Australia’s most beloved muscle cars.

“I bought the car as a rolling shell with nothing and spent three years collecting parts,” says Blake. “Whatever they didn’t make repro I had to track down original, which is horrendously expensive. Dash-wise I had nothing: no fascia, gauges, switches, heater controls – absolutely nothing. It was thousands of dollars just to buy all the bits and they all needed a lot of work to make them presentable enough to be bolted into place.” 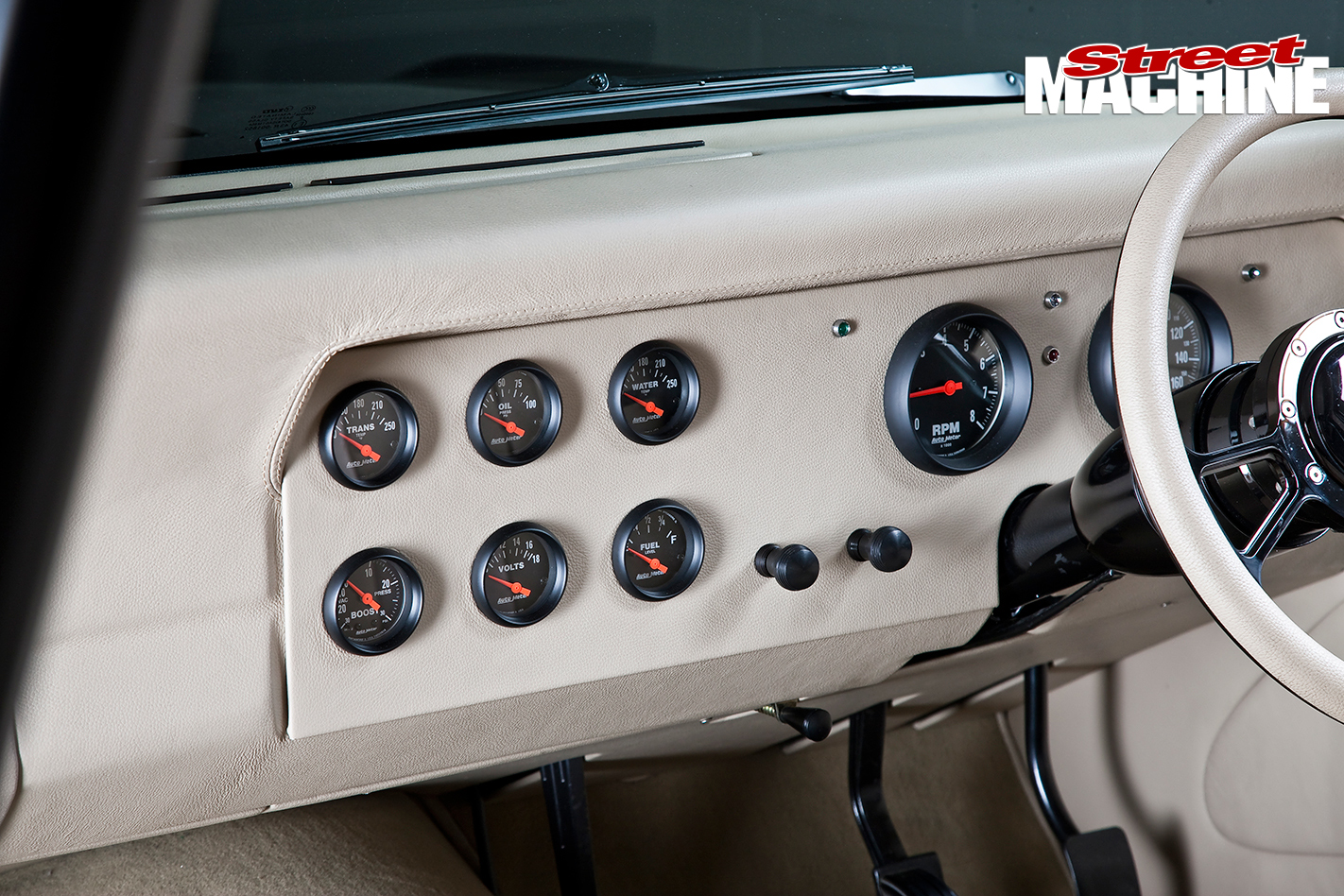 Given this, it made sense to start from scratch. A new fascia was formed and filled with modern gauges, along with aftermarket switches, controls and indicator lights.

Once X-Trim of Smeaton Grange had worked its magic with the sewing machine and high-grade leather, the custom dash became one of Blake’s favourite parts. 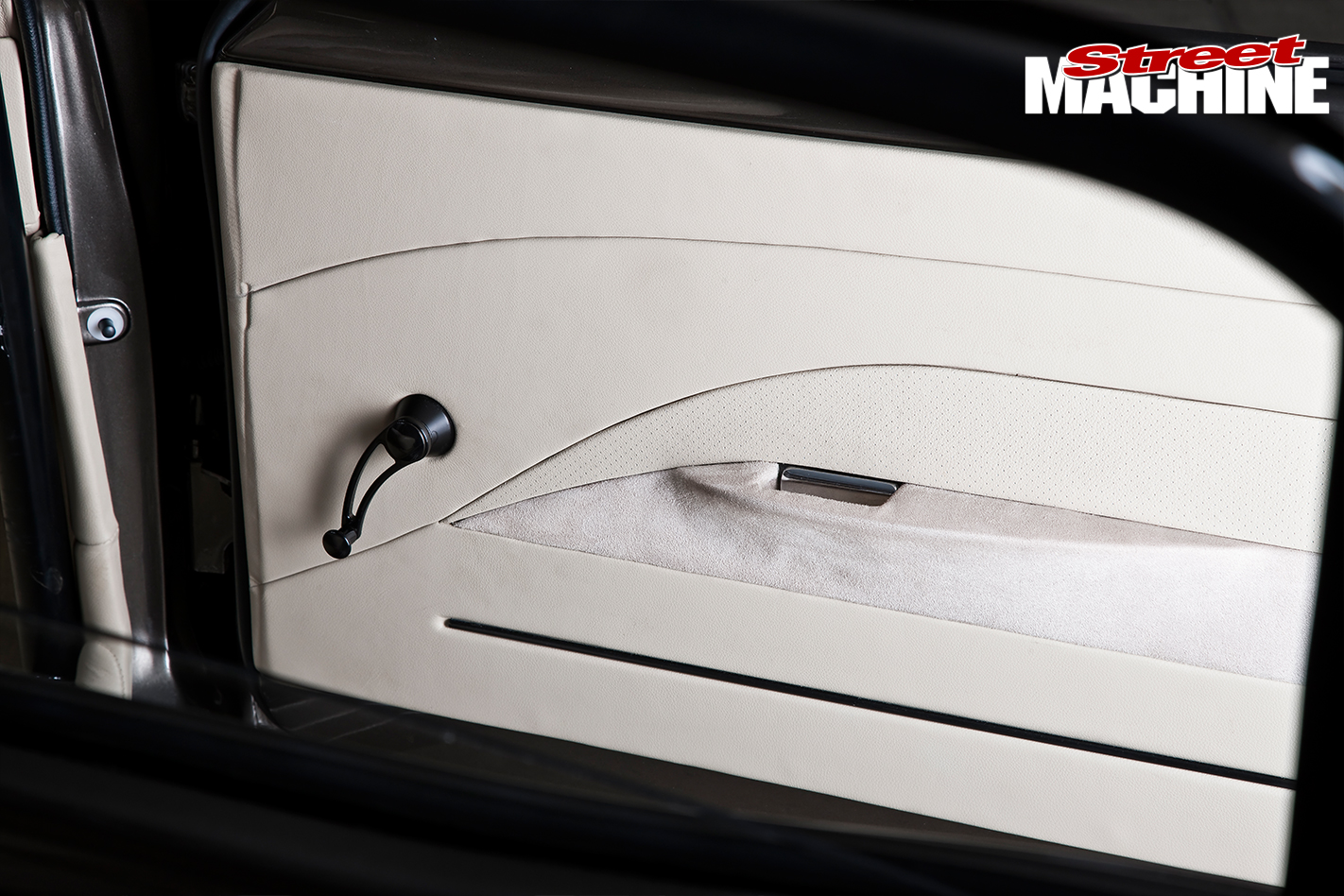 Luke and the X-Trim crew didn’t stop there; they used fibreglass panels to flatten the floor, and fashioned one-off door trims, whose design flows down into the kick panels.

A pair of low-back XY buckets were stripped, before receiving new foam (with additional bolstering for improved comfort and support) and being covered in leather that incorporated suede inserts to match the suede hoodlining. 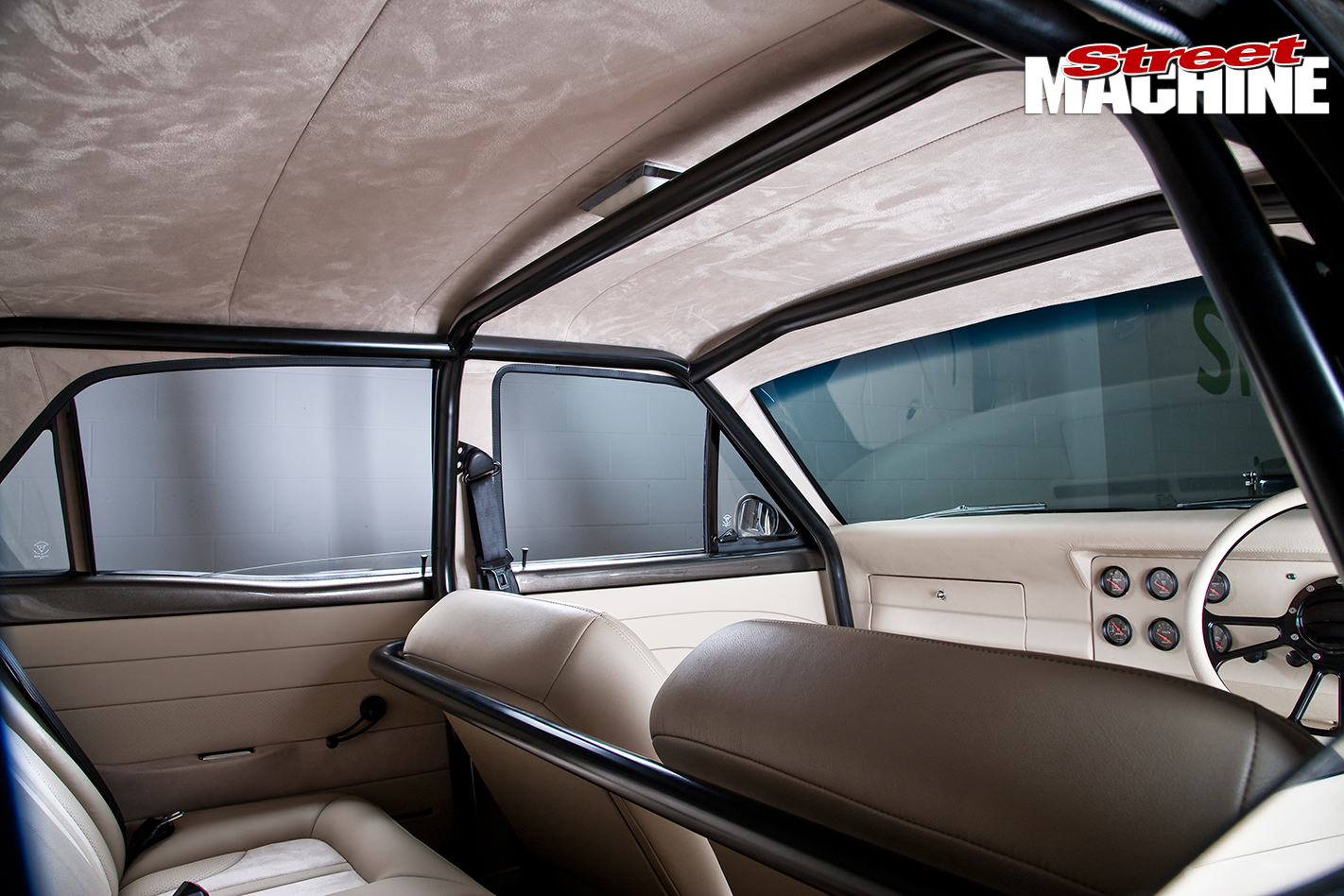 The back seat might look stock, but it’s actually a one-off piece built on top of a fibreglass base. Creating a useable back seat that cleared the tubs and re-shaped floor was no easy feat. Nor was getting the rest of the exquisite trim to go in and around the ANDRA-legal, six-point chrome-moly ’cage. 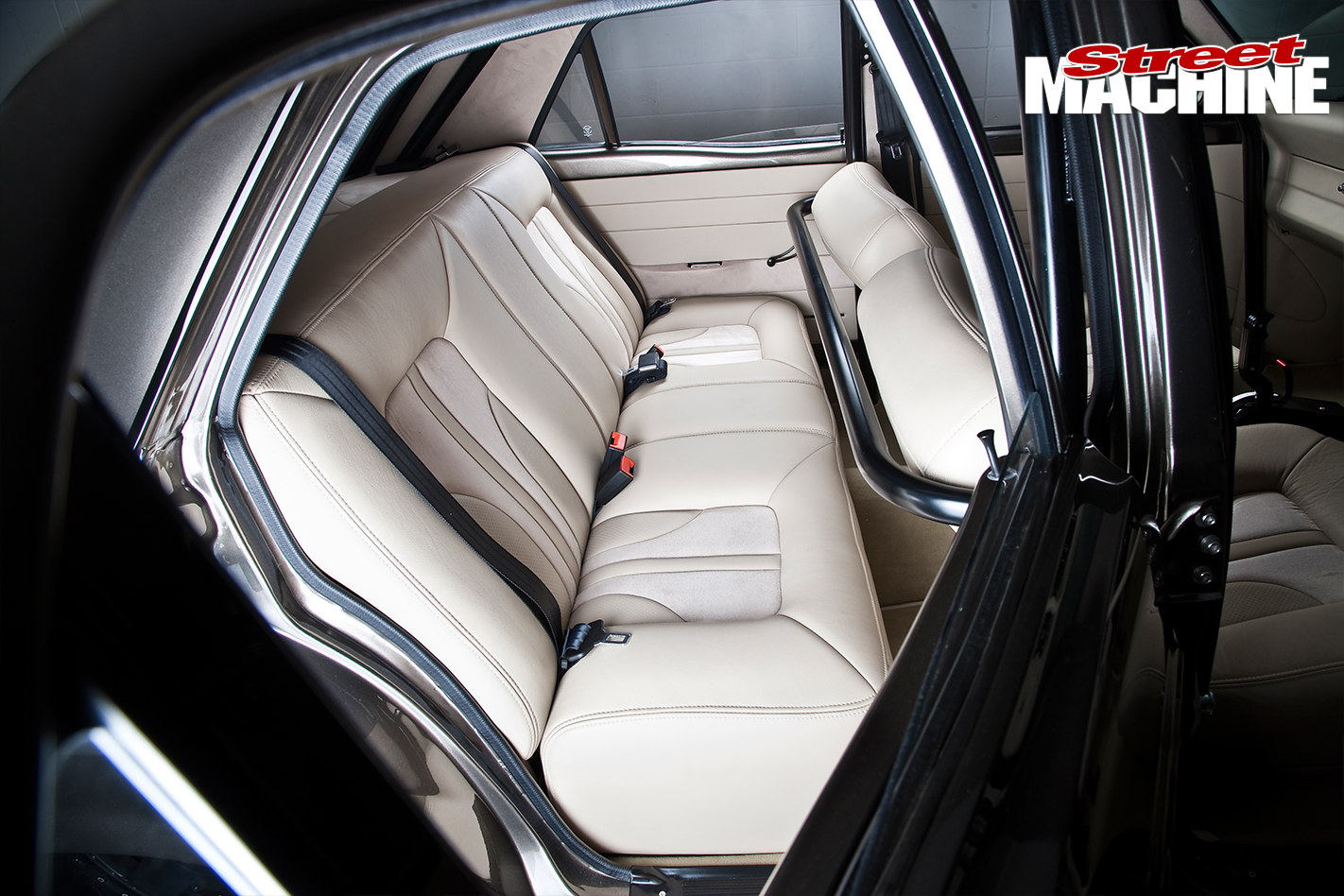 While all this was going on, Ontrak Auto Electrical added a completely new wiring system that is nigh on invisible – very slick.

Since the black silk covers were slid off at the Meguiar’s Great Unveil at Summernats 27, Blake has put plenty of miles on the Auto Meter odometer. “I’ve driven it to places like Harry’s, Bondi, as well as Supernats,” he says. 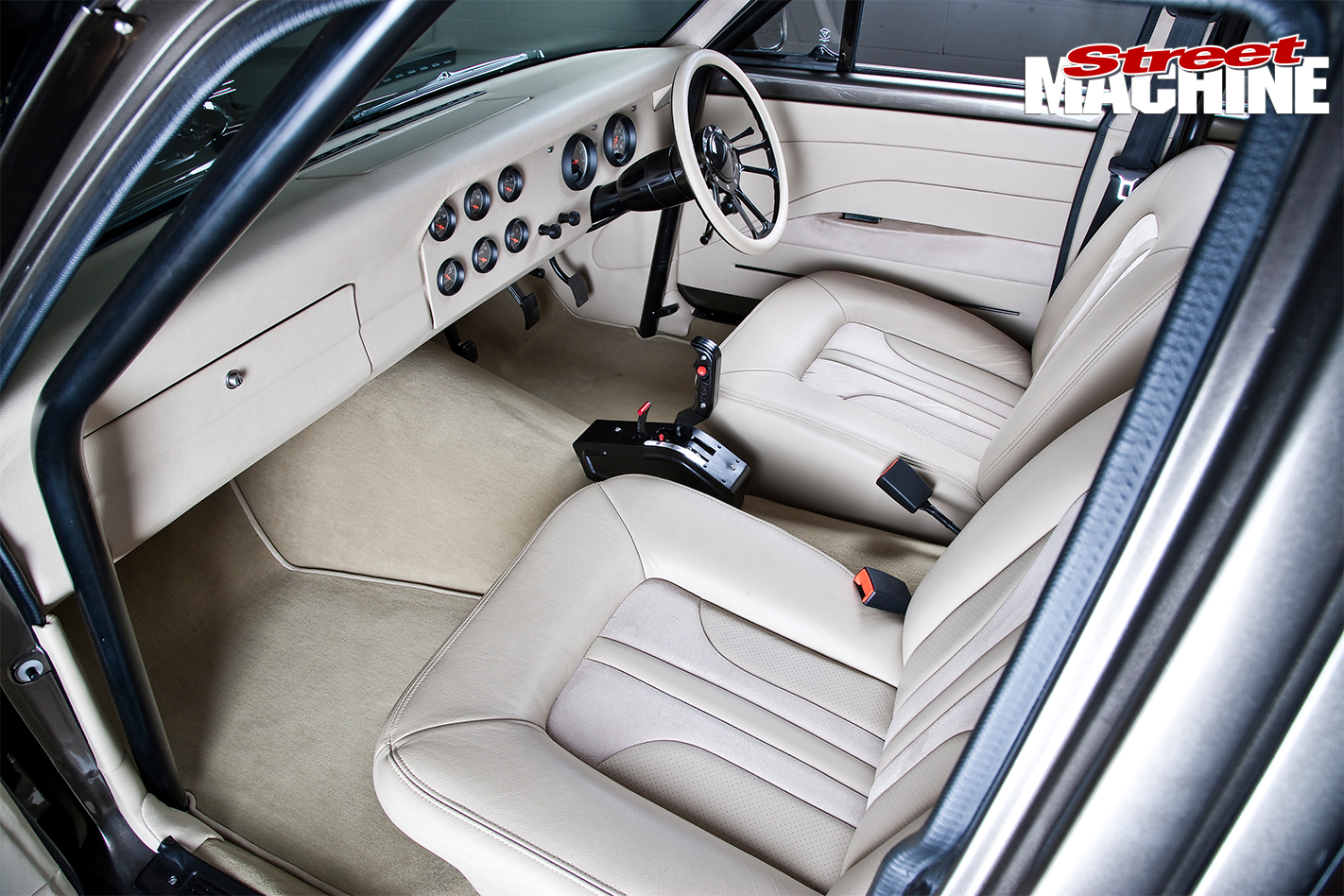 He’s even been pulled over by an RBT. Rather than give him a hard time, though, the fellas commented on how good it looked, giving it the nod of approval.

“Although it’s pretty wild, it looks so classy, it generates respect,” Blake says. “It’s exactly what I was chasing.”

Even Blake’s fiancée Reanne loves the car. The pair are trying to scratch together a deposit for a house and there’s not been one mention of selling BIGQBS to help raise the necessary finances. 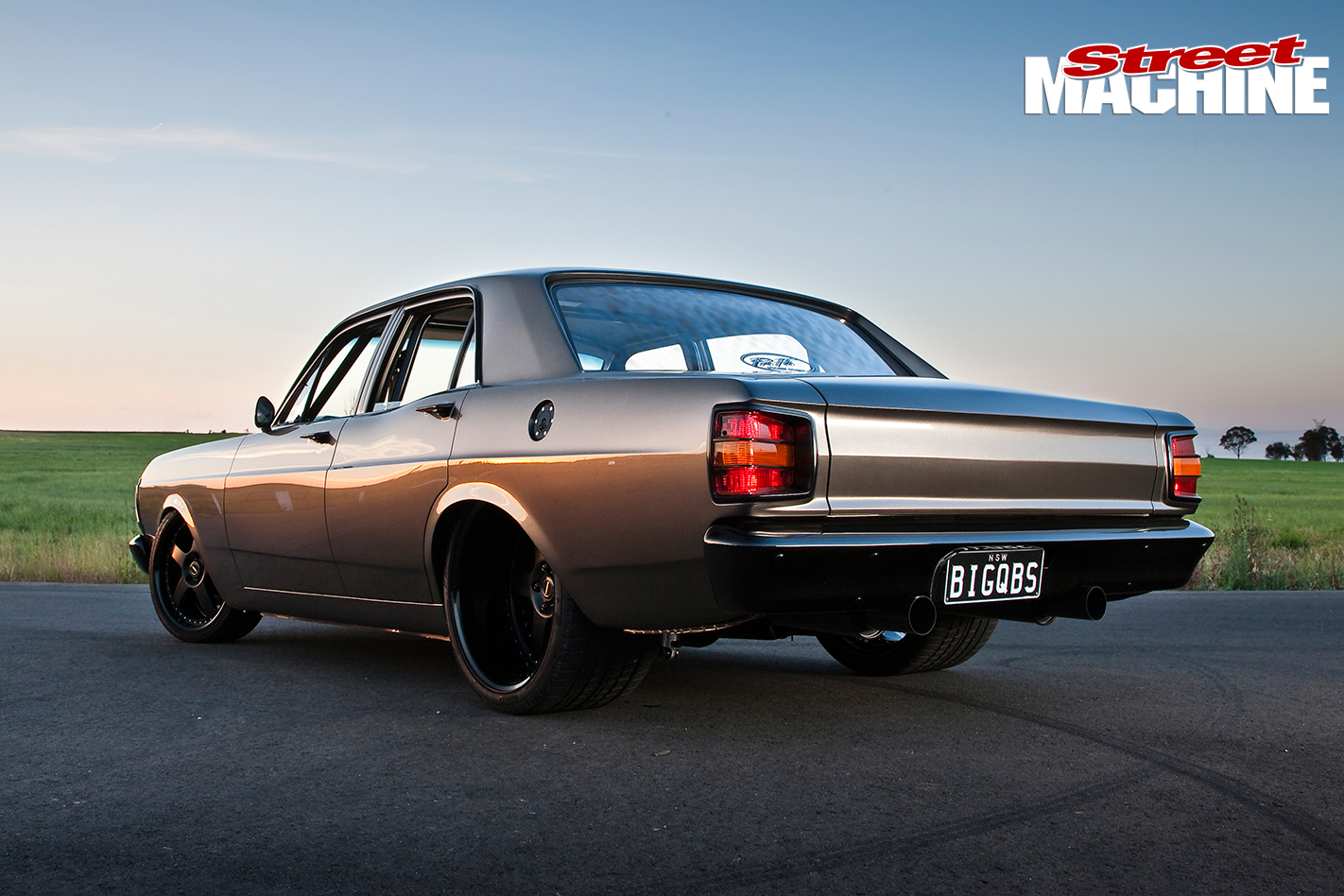 “If I had the money I’d build another one tomorrow,” Blake says.

What can we say, mate – better get those lottery numbers in, and good luck!

To see more of Blake's XY, click the video below to watch a short interview with Pro Flo’s Paul Sant: