Wanna brain the competition at your local mower pull? Jamming a tank engine in your mower is a good start!

Wanna brain the competition at your local mower pull? Jamming a tank engine in your mower is a good start!

IF YOUR weekend has been a busy one and there haven’t been enough hours in the day, you could get the Victa out around dusk and struggle through the undergrowth. Or you could call Glen Simpson and get him to hit it with a proper man-sized mower. With 1650 cubic inches on board, that grass would surely be green dust in seconds. 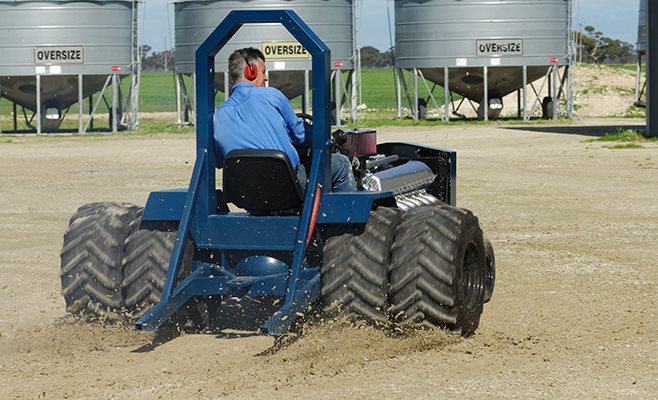 Power is put down by four BKT mud racing tyres fitted to custom 15 x 15in steel rims. Up front, direction is chosen by a combination of a reversed forklift steering system and sheer hope. A Ford Trader differential, cut-down Roadranger transmission, 80 litres of coolant and 100kg of unhinged farmer results in a lithe two-tonne kerb weight

Strictly speaking, Simmo’s mower, No Bull, isn’t a road-going machine. Nor will it actually cut your grass. Per the loose regulations of the 2013 Keith Show Lawnmower Tractor Pull, it’s got no blades. 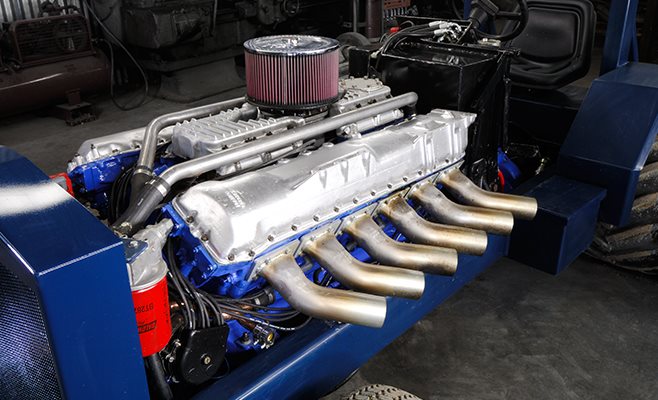 Carburation, internals and block are all pretty much stock; go-fast items are limited to only an air filter, a pair of Crow HI-6 ignitions and a pair of polished rocker covers

But No Bull has got 27 litres of ex-Centurion tank V12 wedged between a custom 80-litre cooling system up front and a 7.125:1 Ford Trader truck differential down back, and it’s destined to tow a one-tonne sled down a dusty track in SA’s south east further than anyone else’s mower, all for the glory of winning an engraved pewter cup. 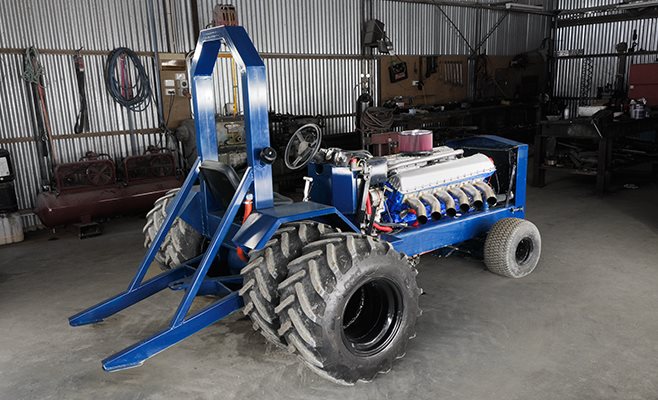 Originally he planned on fitting a Ford big-block, but then the V12 appeared for sale in a car parts magazine and the deal was done. Set up on a trailer for public displays and start-ups, the Meteor was in good running order and just needed a chassis. And wheels. And pretty much everything else.

Simmo had mate Mark Power helping him fabricate the frame, but soon found it might be a three-man job. He found that man in local boy Danno Groot, who was happy to take on the challenge. Grooty struggled to make the engine and driveline fit into the strict 2500mm slicing but he managed it. 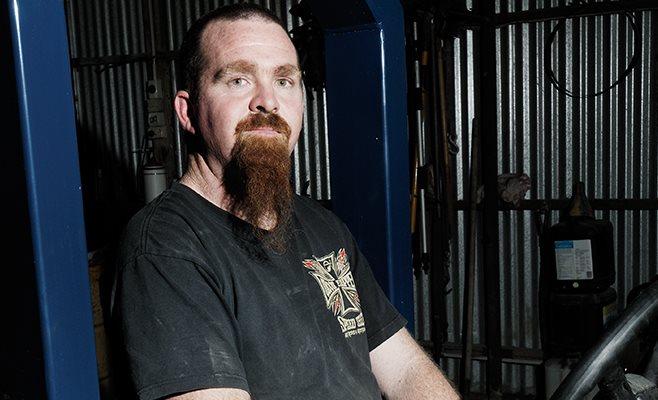 There aren’t many off-the-shelf go-fast bits available for a V12 tank motor, but Grooty has fitted an air cleaner, a pair of Crane HI-6 ignition systems and polished up the rocker covers for that bling factor. The big Meteor donk shoots foot-long flames out the 12 open exhausts, which makes for spectacular viewing at night. “Flame colour is supposedly the way you tune it,” Grooty says. The big donk breathes well; the boys have estimated around 800-horsepower at a giddy 3000rpm. 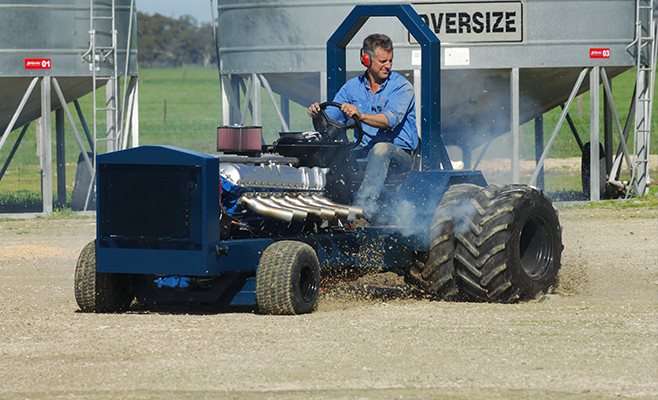 Aside from Mark, who helped with the frame, the boys want to thank Joe Cottam, owner of the similarly-powered Riverina Screamer tractor who provided invaluable advice and parts for No Bull, as well as Tatiara Trucks who were able to supply clutches, starters and other parts to suit. 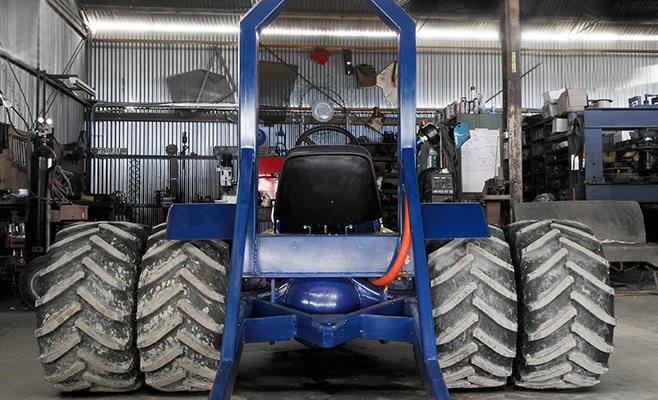 All up, it took Simmo and Grooty three and a half months for the mower to go from two pairs of tyres and an engine on a trailer to becoming the beast you see on these pages. No Bull owes the boys over 500 hours between them, with Grooty working on the lathe for up to 12 hours at a time. 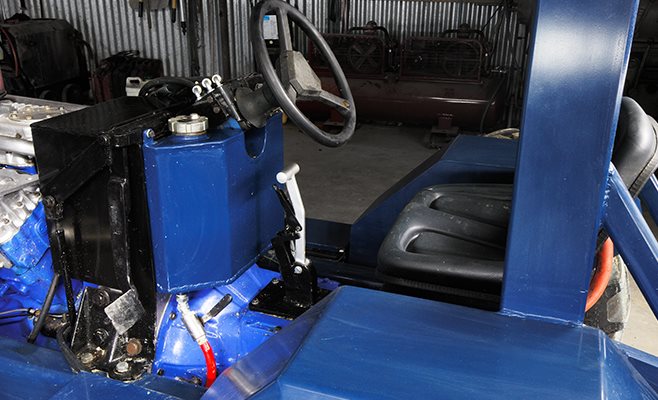 He’s loved every minute of it though and it has launched Grooty’s Race and Resto off the back of the project. As for Simmo, he’s looking forward to the people’s faces when it starts up. And of course, to necking golden ale from the pewter cup with his name on it. 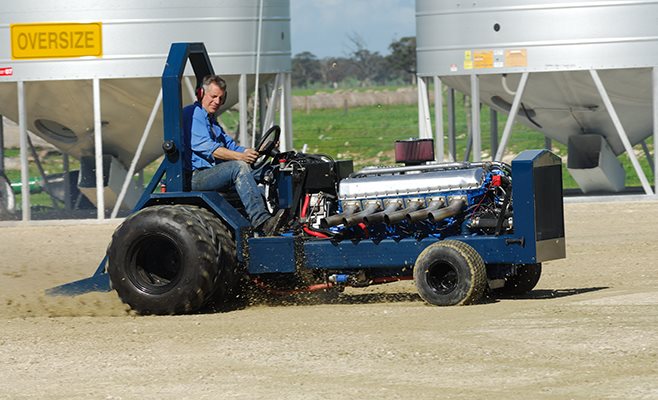 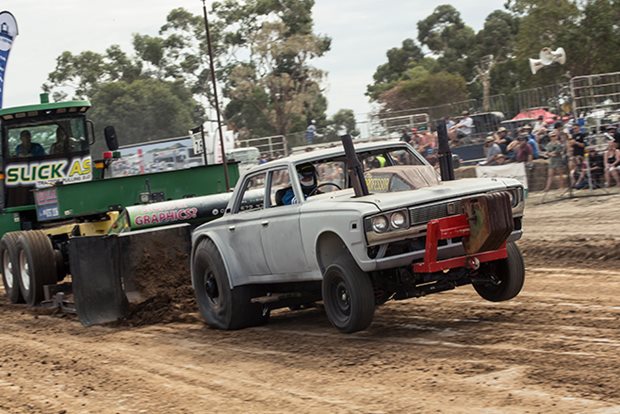 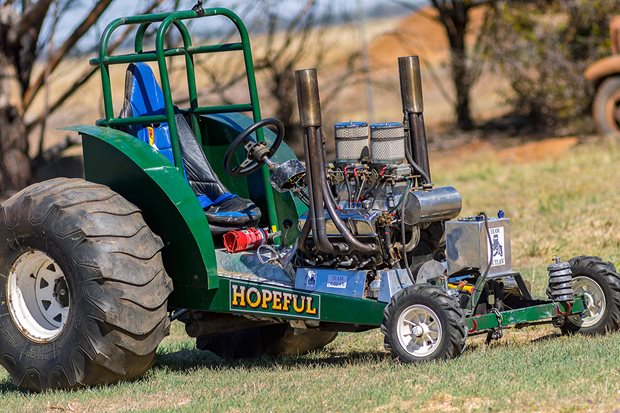 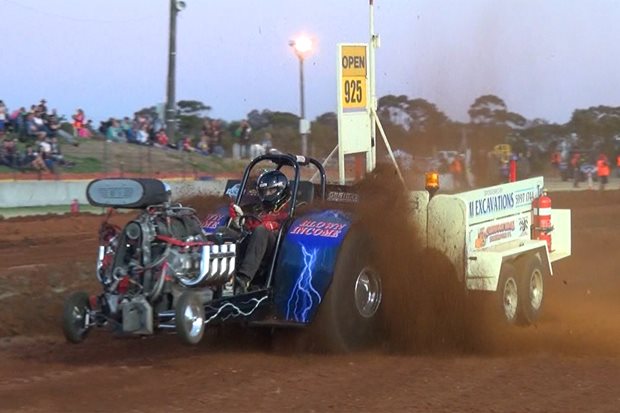