WE ARE really off and cracking now on Day Two of Hot Rod Drag Week! After yesterday’s harsh reminder of the madness we’ve signed up for, including carnage like Tom Bailey frying a piston in the Beast Mode Camaro and dropping out, today was a chance to really get into the swing of things.

Our Aussies had a mixed bag of results at the end of the innings at Summit Motorsports Park in Norwalk, Ohio. It was smiles all ’round for Harry Haig and the Aussie Chevelle crew, as well as their rapidly growing cult following in the pit area. A whopper 8.84@156mph pass in the afternoon made the competition sit up straight and take notice, and the boys were stoked that their mad thrash was finally starting to pay off. A scratch pass in the 10s in the morning gave Terry Seng and the crew a bit more data to work off, so they ramped up the boost to 14psi and made a few more tweaks before sending Harry back out. The crew was rapt with the 8.84, and with the Chevelle finally getting closer to the times the Aussies had been talking up all through the previous week, they were able to pack up and hit the road at a reasonable time. A stop for a feed and some frothy ones was well-deserved, but as they rolled into the first checkpoint at the Stroh Centre at Bowling Green State University, there were concerns that the hard face of the diff gears was wearing off. A quick inspection and oil change was performed in the back lot, and they were off again on the long road section over to Michigan. Brian and Dianne Jensen didn’t have such great luck with their Torana, however. They suspect they spun a bearing on their last pass, and the car was looking hurt after clocking around 10.5 – much slower than the Torry is capable of. They won’t know for sure until they pull it apart for a forensic inspection, but the damage has been enough to pull them out of the competition. It wasn’t all doom and gloom for the Queenslanders though, as they’re planning to pick up their tow rig and rejoin the party to fly the flag for the remaining Aussie teams. The Trapnells copped two broken rockers on the drive yesterday, but Greg was still smiling: “At least it’s not eating the cam this time,” he said. A mended Monaro and a few winks of sleep later, the boys were starting to creep up on getting results from their nitrous tune. They’re running the 598ci big-block rich and gradually leaning out the fuel through the ECU. It’s running a ‘dry’ nitrous kit, so the extra fuel is being fed through the electronic injectors and not the nitrous system. Greg upped yesterday’s results with a 9.46@146mph at Summit Motorsports Park today, so progress is being made. 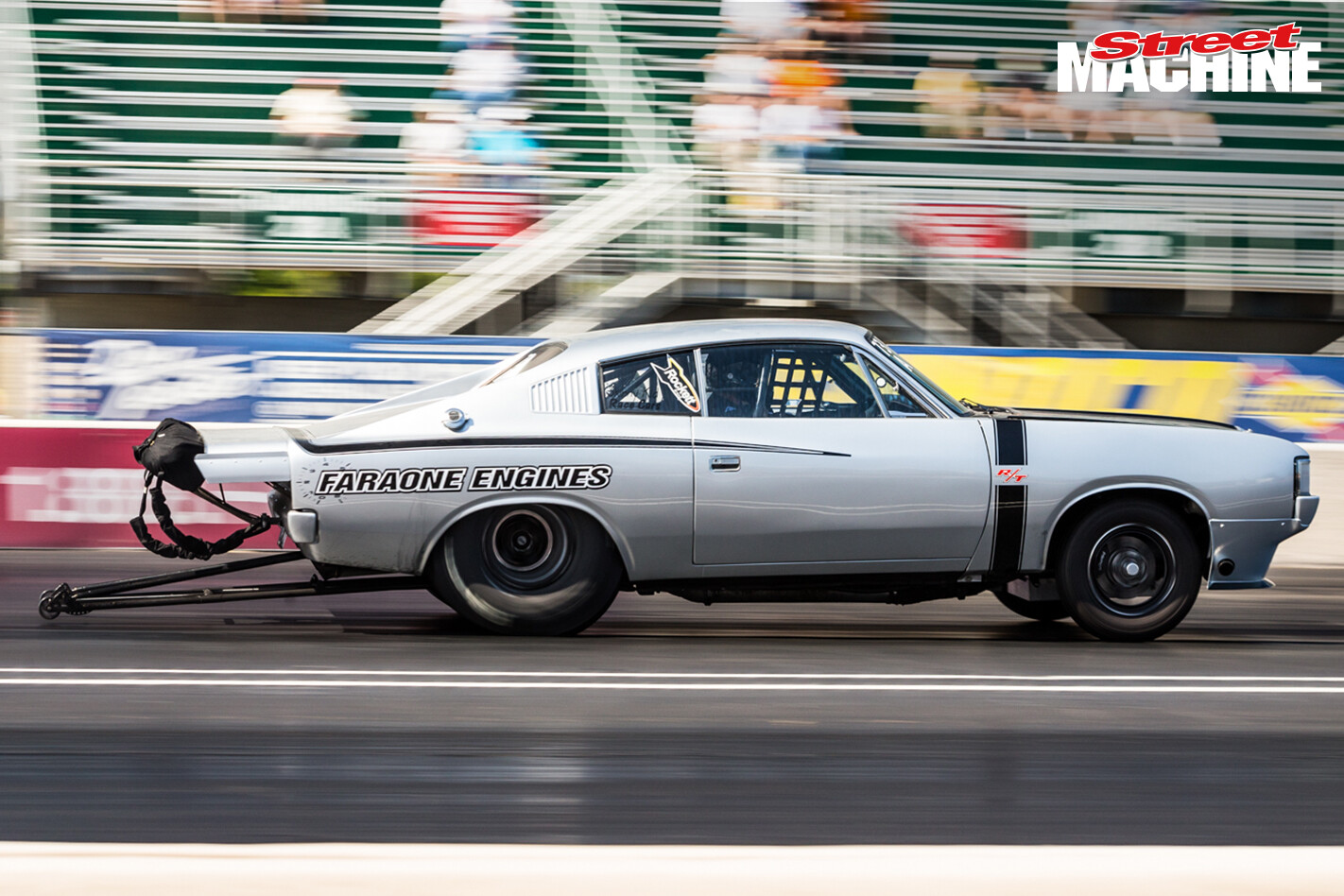 John Faraone and the VH Charger showed a lot of promise today, absolutely hammering the strip with some huge pace. Unfortunately the big-block Chrysler blew a head gasket and John backed off before heading to the pits for an inspection. He suspects there’s something up with the ECU and is planning to swap it out, along with the toasted head gasket. 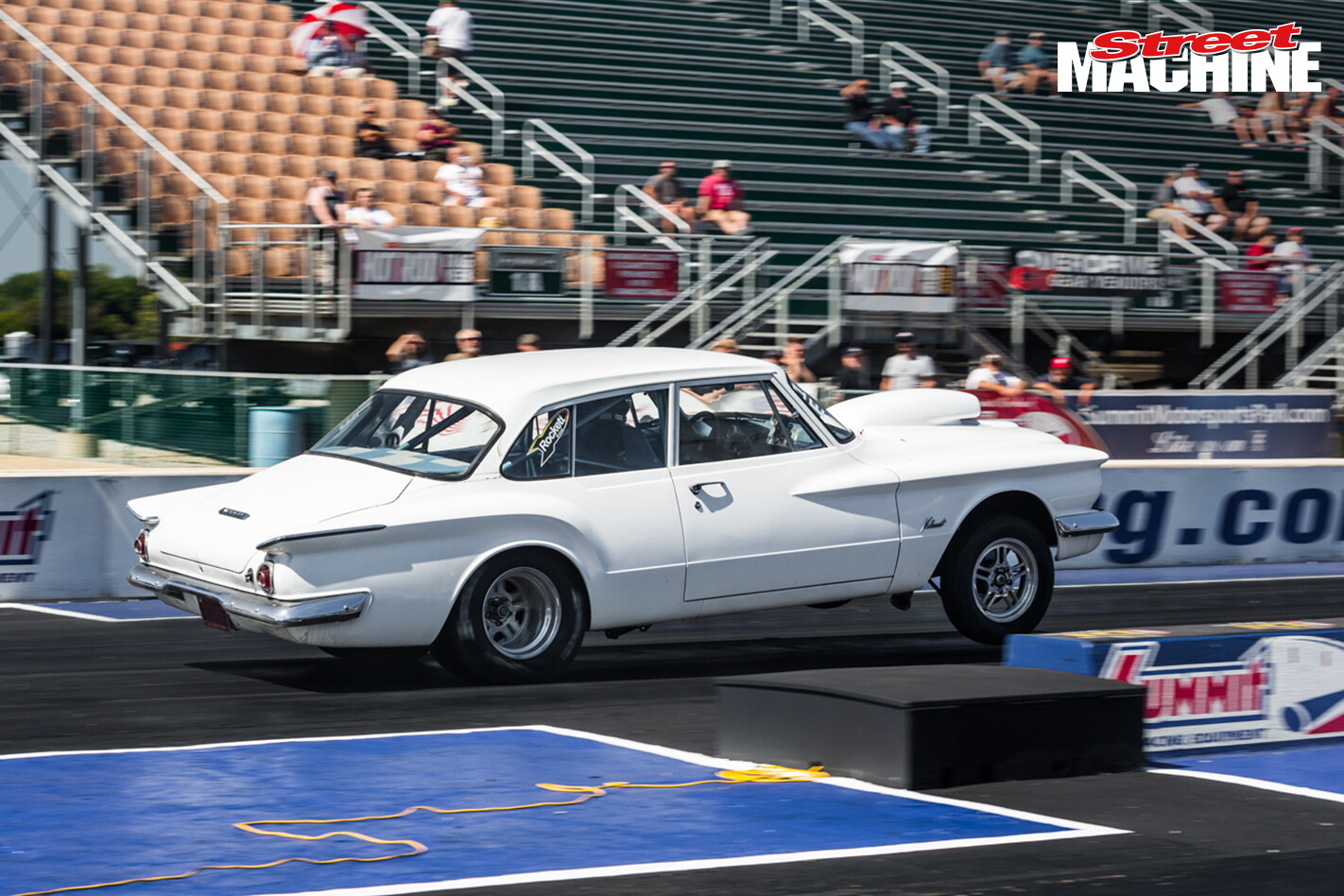 Brenton Gault and his Hugger Orange Camaro have again evaded our cameras, so here's a pic of a wheelstanding Valiant instead. Brenton is proving that the one-and-done theory works better than ever, especially early in the morning! We estimated that he’d be in the mid-nines, as the car is always super-consistent, and we weren’t wrong – Brenton ran a 9.75@139mph before packing the kit up and heading off. Jeff Lutz didn’t back off after the news of Tom Bailey’s early exit, hitting a huge 6.25@240mph to sit more than 1½ seconds in front of his closest competition in the Unlimited class. It’s now his to win – if he can survive the week – and it’ll be extra special to finally take home the Drag Week jacket in a new car, something he’s yet to do. 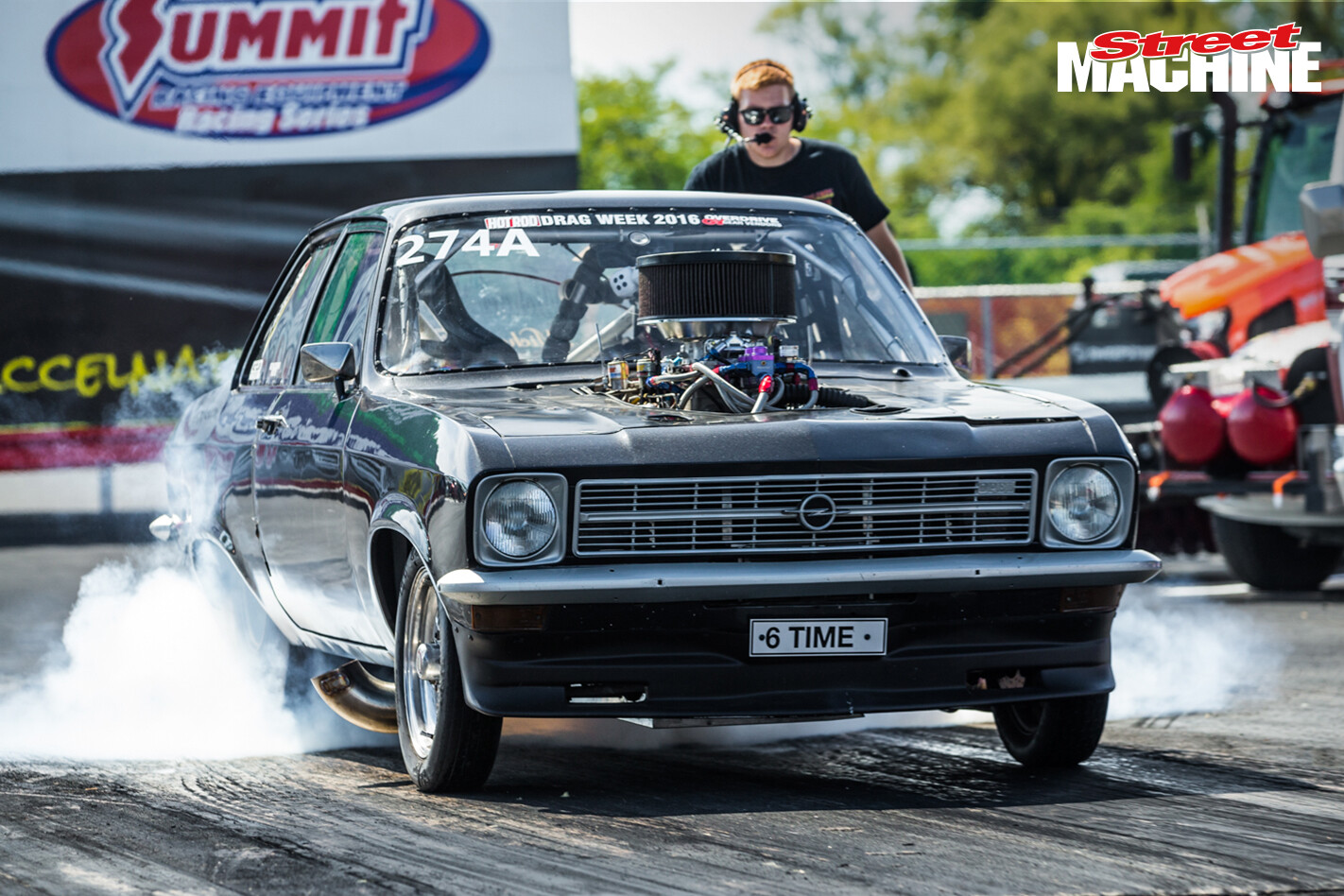 Other Unlimited stand-outs included Swede Magnus Frost inching ever-closer to a seven-second pass in his Opel Ascona, clocking a 8.09@169mph. Arizona dude Troy Clark absolutely rocketed off the line on two wheels in his twin-turbo Model A coupe and broke into the eights with an 8.80@158mph. 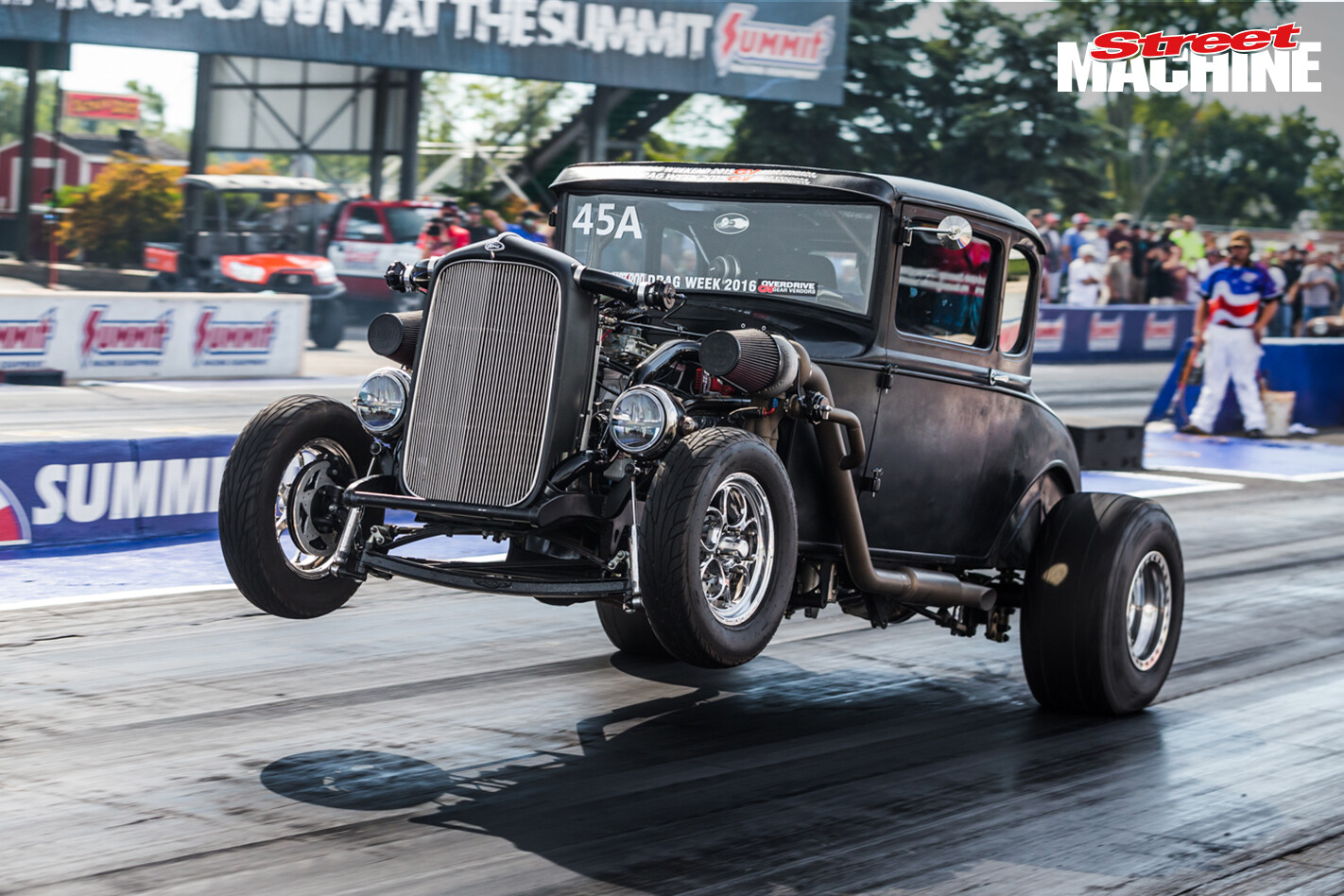 Frank Saponaro also kicked the nose sky-high today in his turquoise Chevy Nova wagon, but came back even quicker in the afternoon with an 7.63@188.33mph to solidify his top position in the Super Street Big-Block class. Unfortunately, the Nova threw an exhaust valve on the road section, throwing shrapnel every which way and fragging a turbo. Yikes!

Tomorrow’s action kicks off in the morning at US 131 Motorsports Park in Martin, Michigan, where the remaining Aussies will join the fray for Day Three. Stay tuned for daily videos, photo galleries and more.