LONG before he hit the big time in Hollywood with flicks like Dead Poets Society and The Truman Show, Australian director Peter Weir’s first feature film was this low-budget, pitch-black comedy/horror, and it’s a beaut. 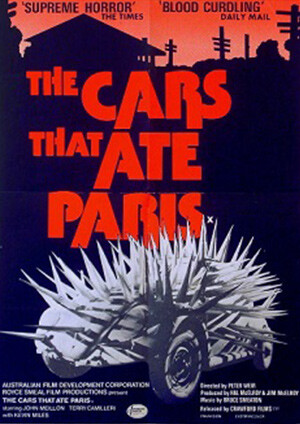 The Waldo brothers, Arthur (Camilleri) and George (Scully), are driving their EK Holden through rural Australia, hoping to find work. As night is falling, they spot a sign advising of employment in a town called Paris, so they follow the directions down a winding dirt road. But a sudden blast of bright light blinds driver George and the EK careens down a slope, killing him.

After waking up in Paris’s hospital, the shell-shocked Arthur is taken under the wing of the town’s mayor (Meillon), who lets him stay with him and his wife Beth (Jaffer) and two daughters.

However, unbeknownst to Arthur, his ‘accident’ was anything but – the inhabitants of Paris have been shining bright lights into drivers’ eyes to deliberately cause crashes in order to keep the town’s economy afloat. The cars are torched and looted, and any survivors have their clothes and valuables pinched before being subjected to the bizarre experiments of the town doctor (Miles), leaving them in a vegetative state. It seems that Arthur has been spared only because the mayor has taken a shine to him.

It’s not long before the meek Arthur gets the distinct feeling that things aren’t quite right in Paris, and is particularly unnerved by the gang of young men that hoon about menacingly in their hotted-up, spray-painted jalopies (made from bits of previous victims’ cars).

It appears the gang are pissed off at Paris’s older generation, who they see as hoarding all the best spoils from the accidents. When the hoons deliberately ram the mayor’s fence during the night, the stage is set for an extremely violent showdown between man and beastly machine.

MORE THE BEST CAR MOVIES OF ALL TIME

PART comedy, part western, part horror, The Cars That Ate Paris is a remarkably assured first feature for writer/director Weir. For most of the film he wisely offers only hints of the monstrous nature lurking within the town’s ill-gotten vehicles, before finally letting loose with a bloody climax full of automotive carnage – including a particularly memorable, echidna-like metal-spiked VW Beetle. Purists will no doubt cry matching-numbers tears into their lovingly restored hankies at the sight of all the Frankensteined, graffiti-adorned early Holdens and 50s American land-barges, but Street Machine readers keen for some macabre, slightly surreal 70s Australiana should find this a real hoot.

Action:
A veritable demolition derby of a climax full of junkyard-spec now-classics

Plot:
A traveller survives a car accident while passing through the small town of Paris, Australia, and gradually learns the townspeople’s dark secret