IF YOU’RE going to play a musical instrument as big and cumbersome as a double bass, you need a solid means of transportation. Scott Owen from Melbourne rock legends The Living End has had to cart his instrument all around the country, and indeed the world. So what’s the vehicle of choice for Australia’s most prominent rock double bass player? An FB Holden van, no less.

Scott and his mate Chris Cheney formed The Living End 20 years ago after cutting their teeth in the Melbourne rockabilly scene, playing covers as The Runaway Boys. So classic cars are par for the course.

How did you get into the car scene?

It was part of the whole rockabilly thing. emI just love the 50s and 60s rockabilly scene and look. For some reason I never gravitated towards the American cars. I just liked the old Aussie Sunbury-style tough cars.

The Living End in action at the 2013 Street Machine Summernats. The boys slayed ’em!

And the van was used to lug gear to gigs in the early days?

When we started, we hitched a trailer up to Chris’s old Kingswood V8 sedan. But when we weren’t touring, I still had to lug this big violin around to practices and local gigs. A sedan wasn’t going to cut it, so a clapped-out EJ panel van did the job for years. Then I upgraded to the 1960 FB. 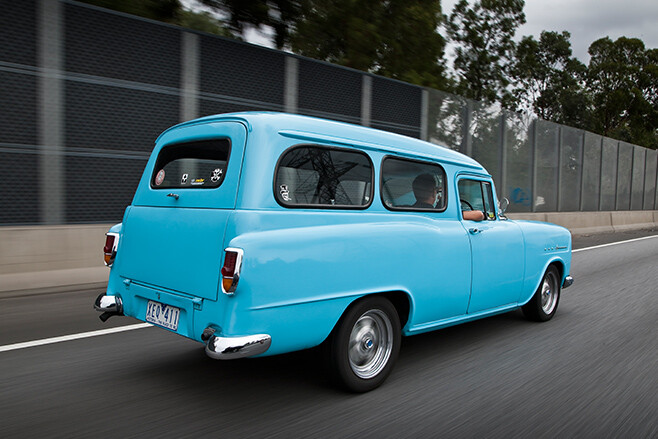 What was the FB like when you got your hands on it?

I got it from a panel beater who’d had a crack at hotting it up. It had a red motor with triple Strombergs and a tiny racing steering wheel. I put in a nine-inch diff that I’d pulled from the EJ and swapped in an Aussie four-speed. I swapped the Strommies for a two-barrel Holley and put on a more sensible tiller.

A chance encounter exposed Scott to rockabilly music: “My dad was walking our dog through the car park of VFL Park when I was 16 and he picked up a cassette off the ground. He brought it home for me thinking: ‘Scott likes music’. The cassette was the Stray Cats’ self-titled first album. The cover alone got me, but when I listened to it I was hooked. Then there was the revving motor at the start of another Stray Cats album, Rant N’ Rave. Double hooked!”

Do you know much of the car’s history?

I didn’t know much, but one day I was out looking for parts and as I pulled up in this bloke’s driveway he goes: “Well, f--k me, I used to own this car. This was mine from about 1970 ’til 1983.” He was freaking out. So he said: “Do you mind if I take her home and show the missus for old times’ sake?” I was like: “Just make sure the inside of the back is clean when you bring it back!” Y’know, don’t ‘reminisce’ too much.

It looks pretty good now. For a long time it got neglected, as we were always on tour and it was parked outside. The rust got into it, but I had no time to fix it. Then about six years ago – on my birthday – a water tank fell off its platform and crashed down on the A-pillar above the drivers door and caved in the front quarter. That was a good excuse to go over the whole car, get all the rust cut out, give it a new lick of paint and get it back up to scratch again. Nice birthday present though [laughs].

Does it still earn its keep as a gear-hauler?

No, but I’m never going to part with it. Rather than any monetary value, the value of this car for me is in the memories, driving around and actually enjoying the car. Even though I think these go for a fair bit these days [laughs].