Allison Hadfield has written the book on her famous dad, hot rodding visionary Rod. It's a cracker!

ROD Hadfield wasn’t the first guy to build a hot rod in Australia – not by a long shot – but he is undoubtedly one of the most prolific and consistently innovative builders in the country. Even a handful of his many builds would qualify Rod for legend status alone, but once you add in the groundbreaking work Rod and his wife Carol did in the modified car industry – and their efforts both on and off the track at Lake Gairdner – you’ve got a bloke who has spent his time on earth well. 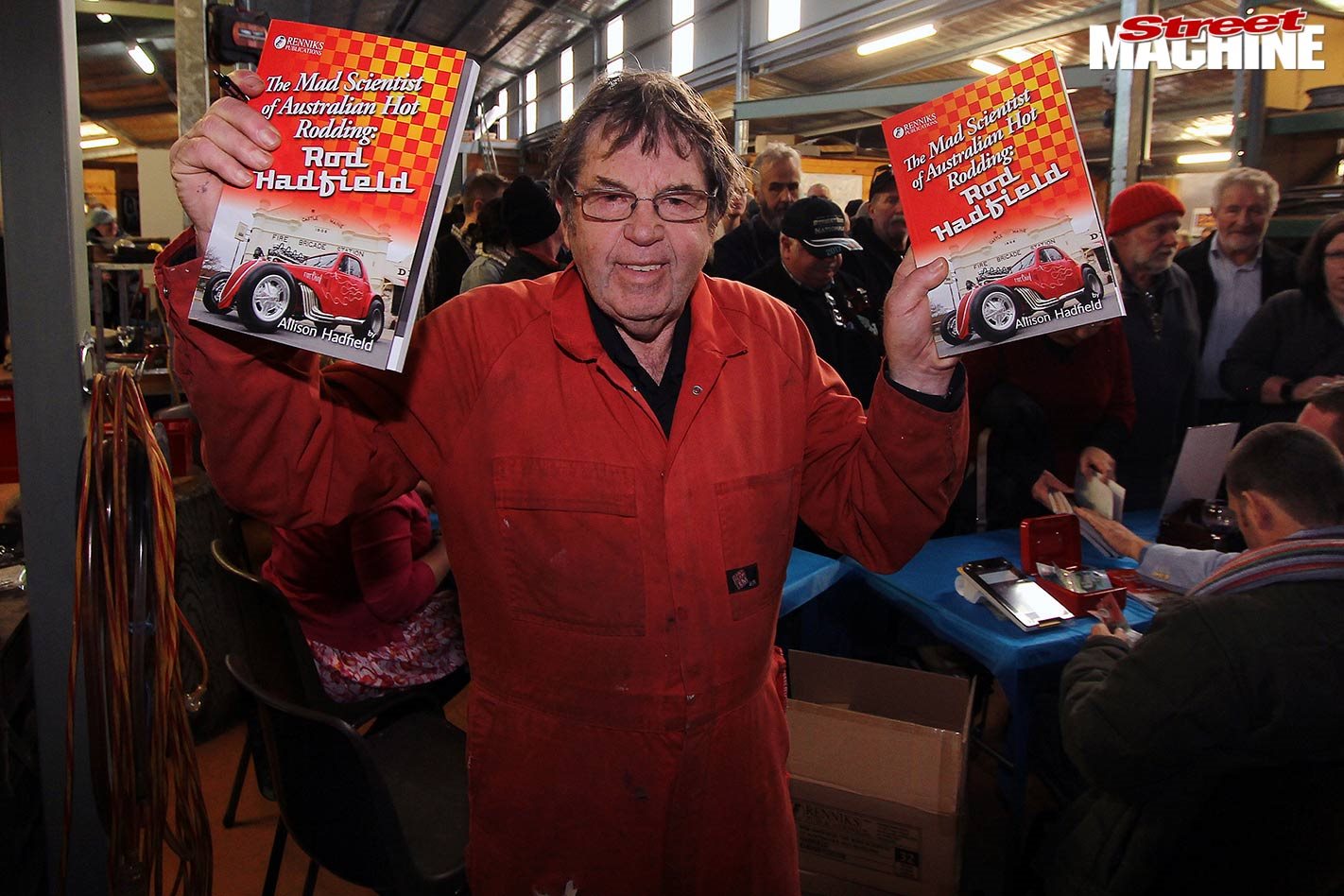 Rod’s daughter Allison grew up amongst all this and has long thought that someone should write a book about Rod’s life. Allison is a librarian by trade and has experience writing for journals and publishing her own ’zines, so when she figured out that the job of writing Rod’s biography should fall to her in 2016, she was well-equipped to tackle such a daunting project. 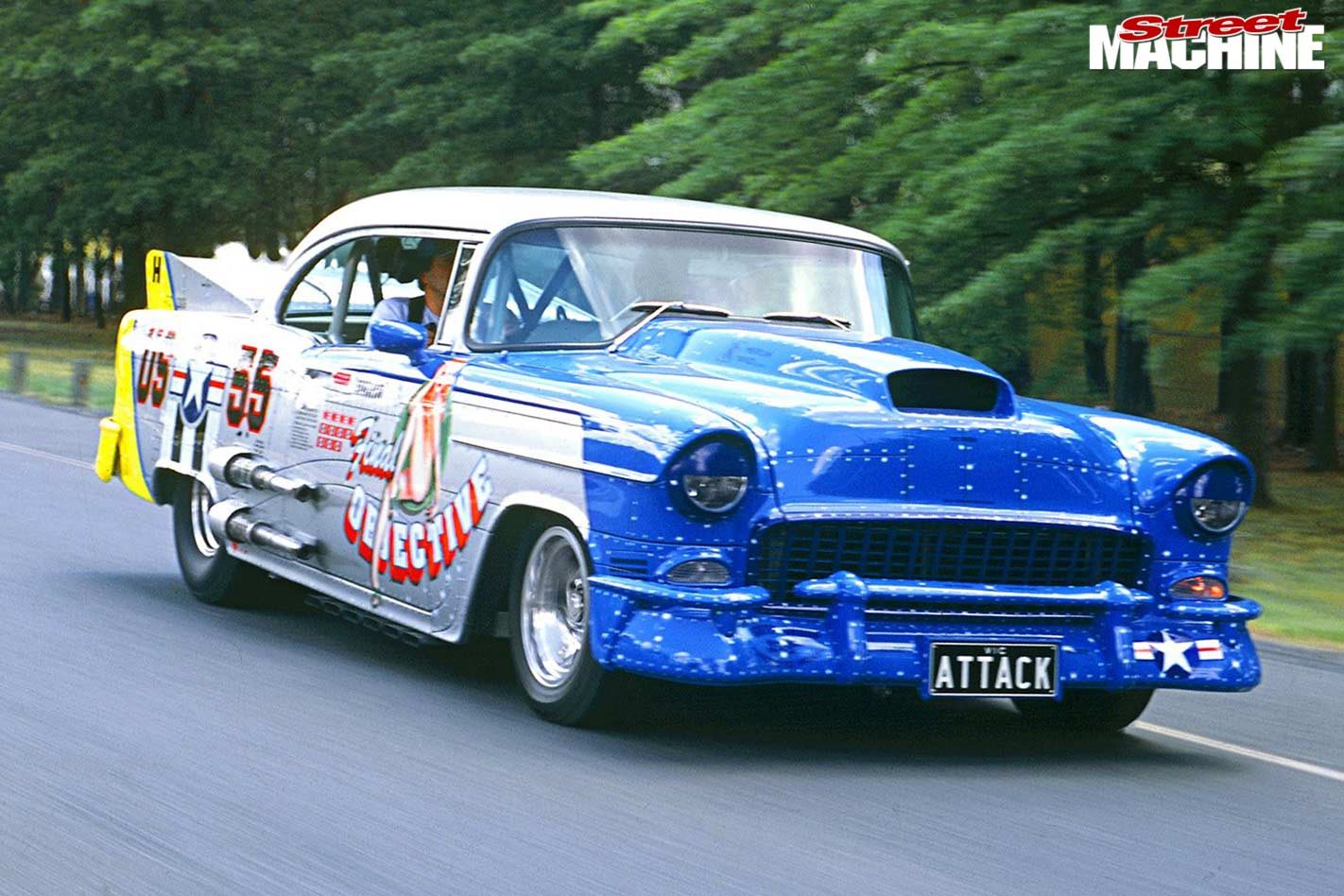 Final Objective takes a lap down Northbourne Avenue, outside of Street Machine Summernats 2003

The Mad Scientist of Australian Hot Rodding: Rod Hadfield is a cracker of a book that I devoured in one long sitting. The book devotes a chapter to each of Rod’s most famous creations – builds like his blown ’34 Ford coupe that became a trophy-winner on debut at the 1967 Melbourne Hot Rod Show; his record-setting 200mph Salt Shaker; the Merlin V12-powered Final Objective ’55 Chev; and many others. 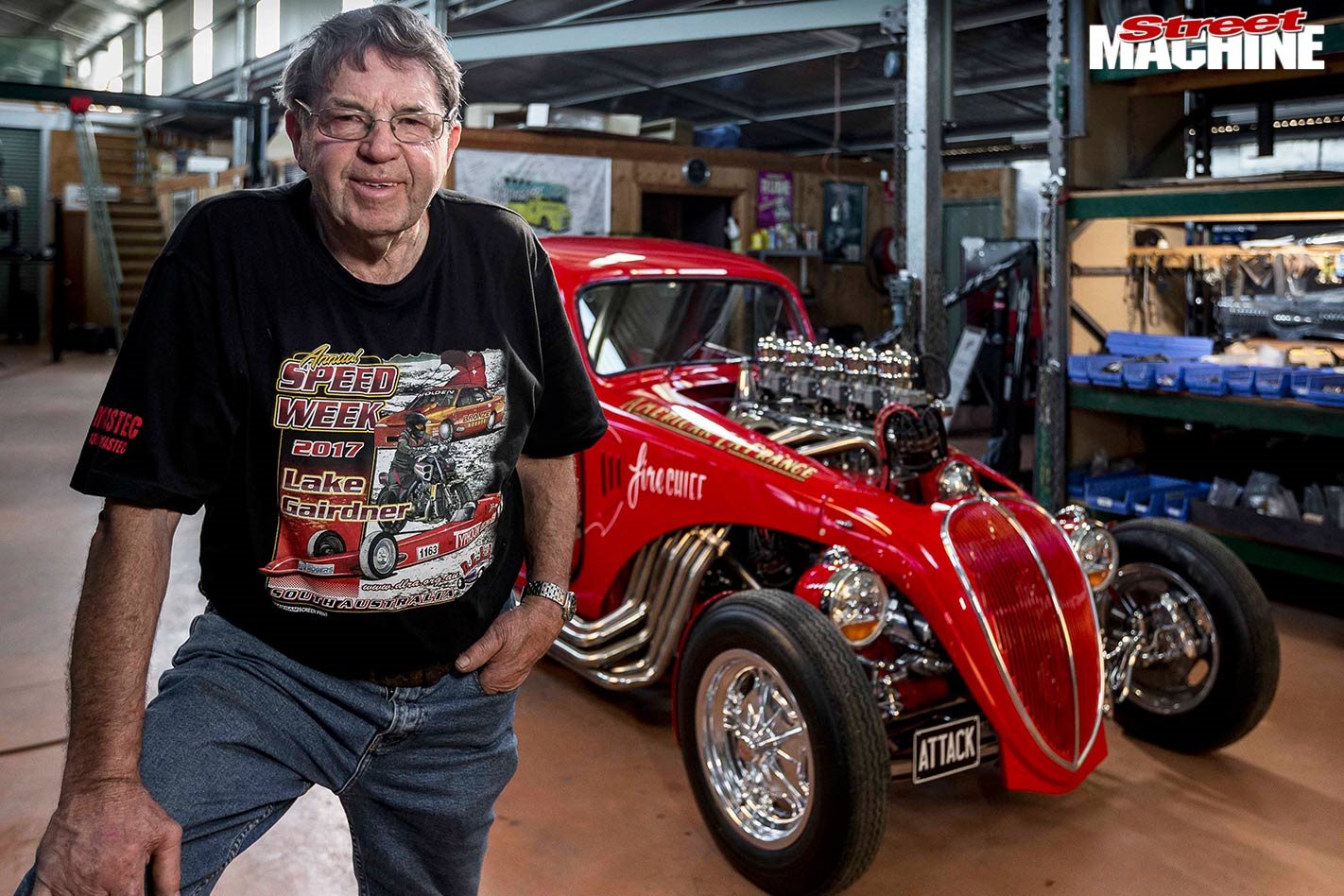 But there is a lot more to Rod’s story than simply his automotive creations. For starters, the book serves as a history of the Castlemaine area itself, at least as far as hot rodding goes. It is also a deeply personal account of a young man finding his way in the world in the 1960s and early 70s. Destined for the life of a dairy farmer, Rod was instead fascinated with cars and machinery. The story of how Rod battled with the expectations thrust upon him is by turns moving, amusing and inspiring. 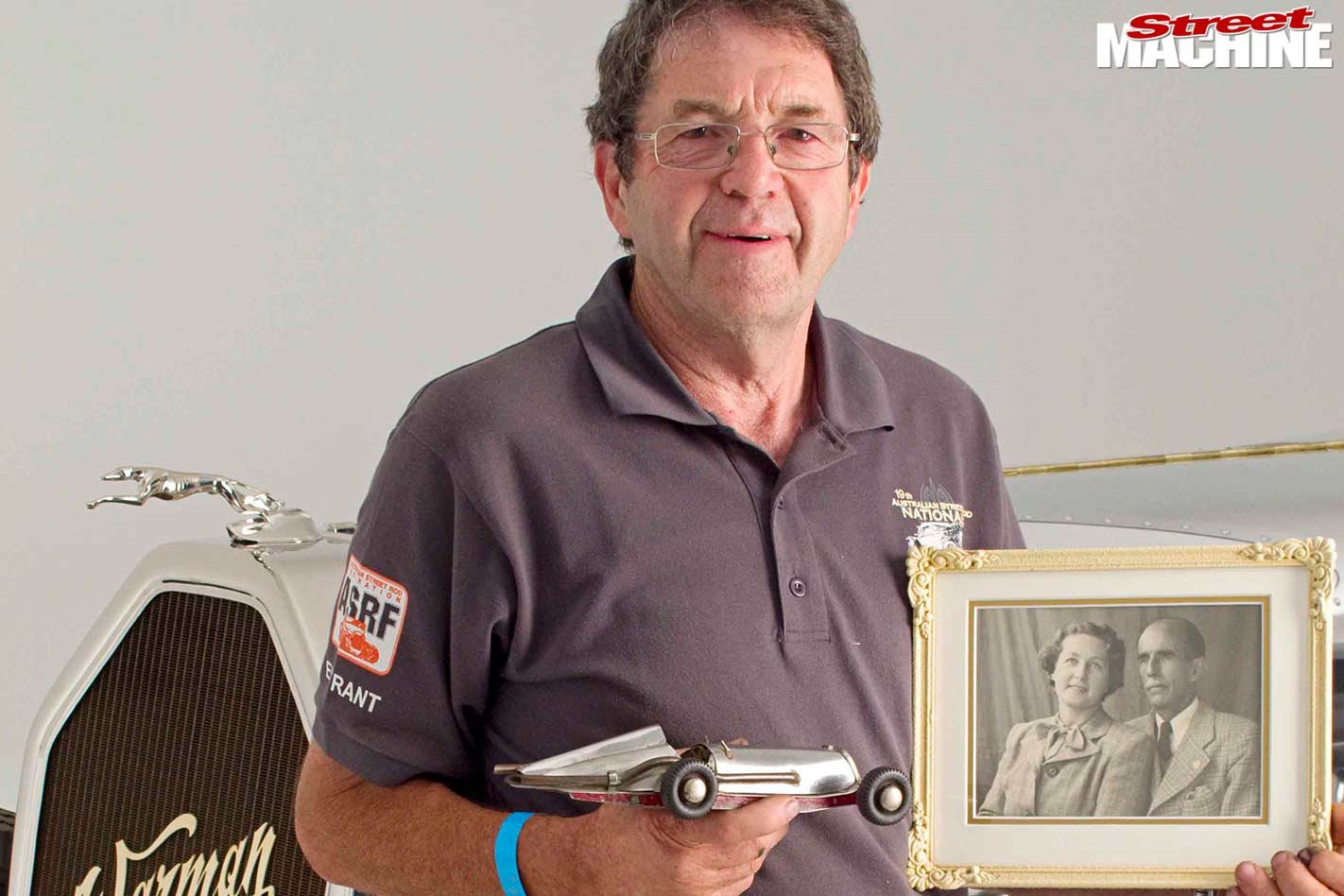 By the time Rod finally broke away with the farm, he’d already had a long association with the Castlemaine region thanks to hot rodding and it would become the perfect place to pursue his ambitions. Rod had already completed his first gearbox swap by this time and these became the foundation of the Castlemaine Rod Shop business that Rod and Carol would build with great energy for the next 30 years. 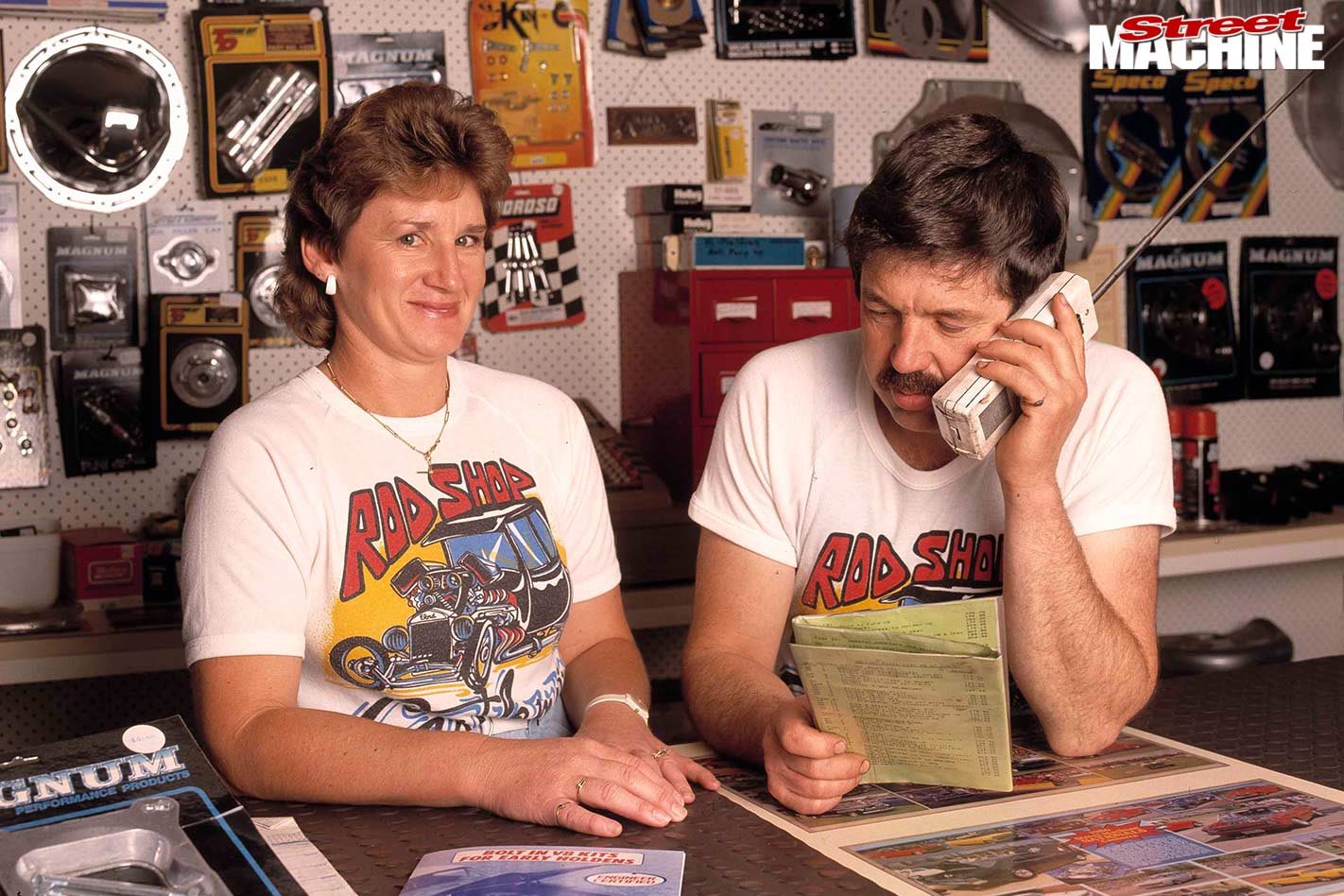 Rod and Carol at the Castlemaine Rod Shop, in 1988. Carol was a vital component of the success of the business and continues to work tirelessly for the DLRA

The stories from these early years of the business are fascinating. For example, when Rod first started advertising his gearbox adapters through Custom Rodder, the family had no phone to answer enquiries. The local police station would instead field the calls and give Rod a list of numbers to call back from the payphone!

The book carefully documents many of those folks who assisted Rod on his journey, including the pivotal figure of his grandfather Ray ‘Pa’ Warman; his early mentor Herb Brisbane, who taught Rod to weld; the Rod Shop’s first employee Ian Mapson; and the late, great Billy Musset, amongst many others. If you can read the telegram Pa Warman sent to Rod after he took out the 1970 Melbourne Hot Rod Show without getting a tear in your eye, then you are made of tougher stuff than me! 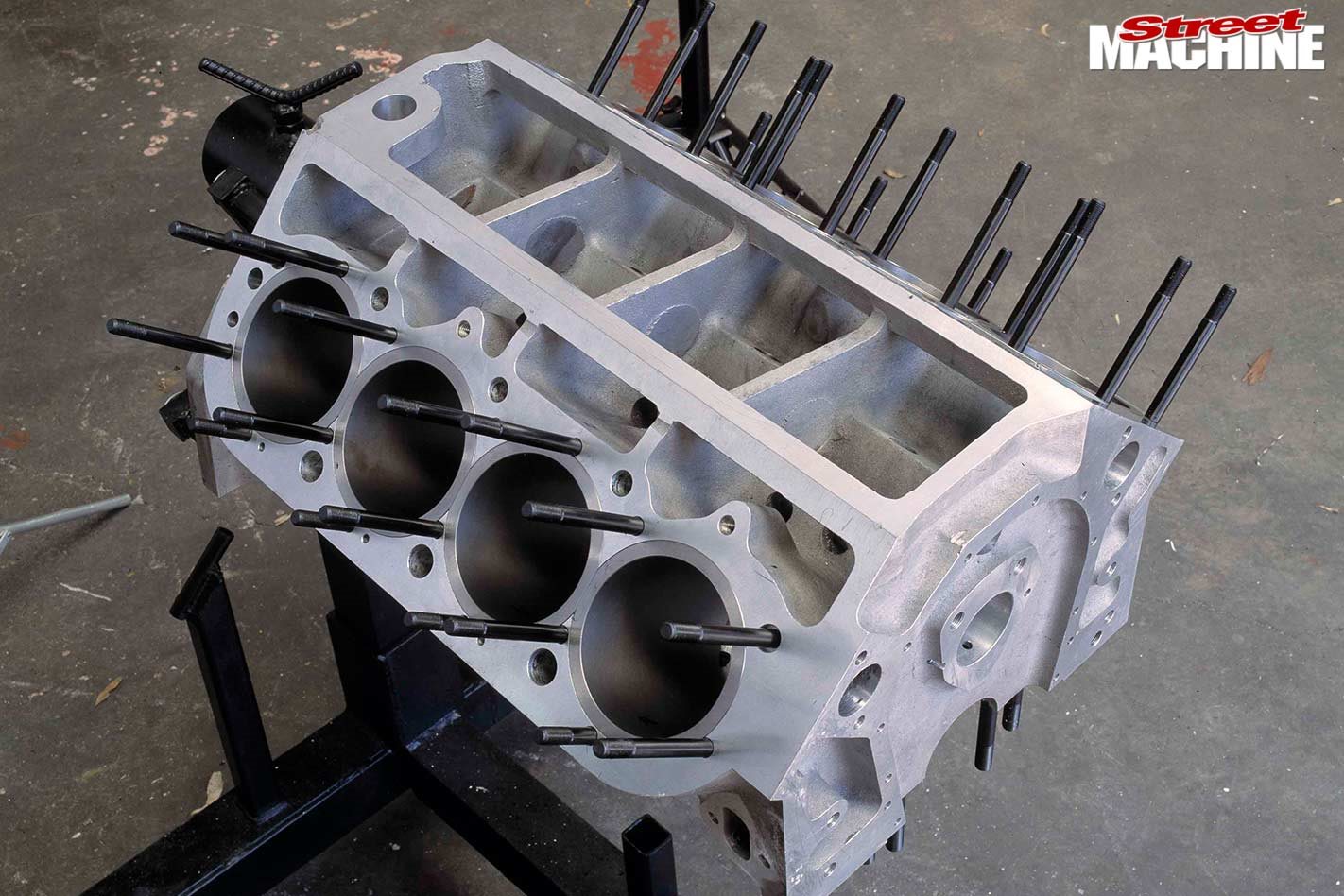 Rod and Carol have tackled many ambitious projects, including the CRS ‘Rodent’ big-block, which was to be produced in either aluminium or magnesium for use in the small aircraft industry, as well as racing. Red tape and funding woes killed an idea that was ahead of its time

Despite the author’s close relationship with her subject, she doesn’t shy away from the hard stuff or fail to document the lows that invariably accompany the highs when attempting to fulfil outsized ambitions on the Hadfield scale. There is plenty of humour, too, and some great archival images. As Molly used to say, do yourself a favour; grab a copy at graffittipub.com.au or cruzin.com.au. 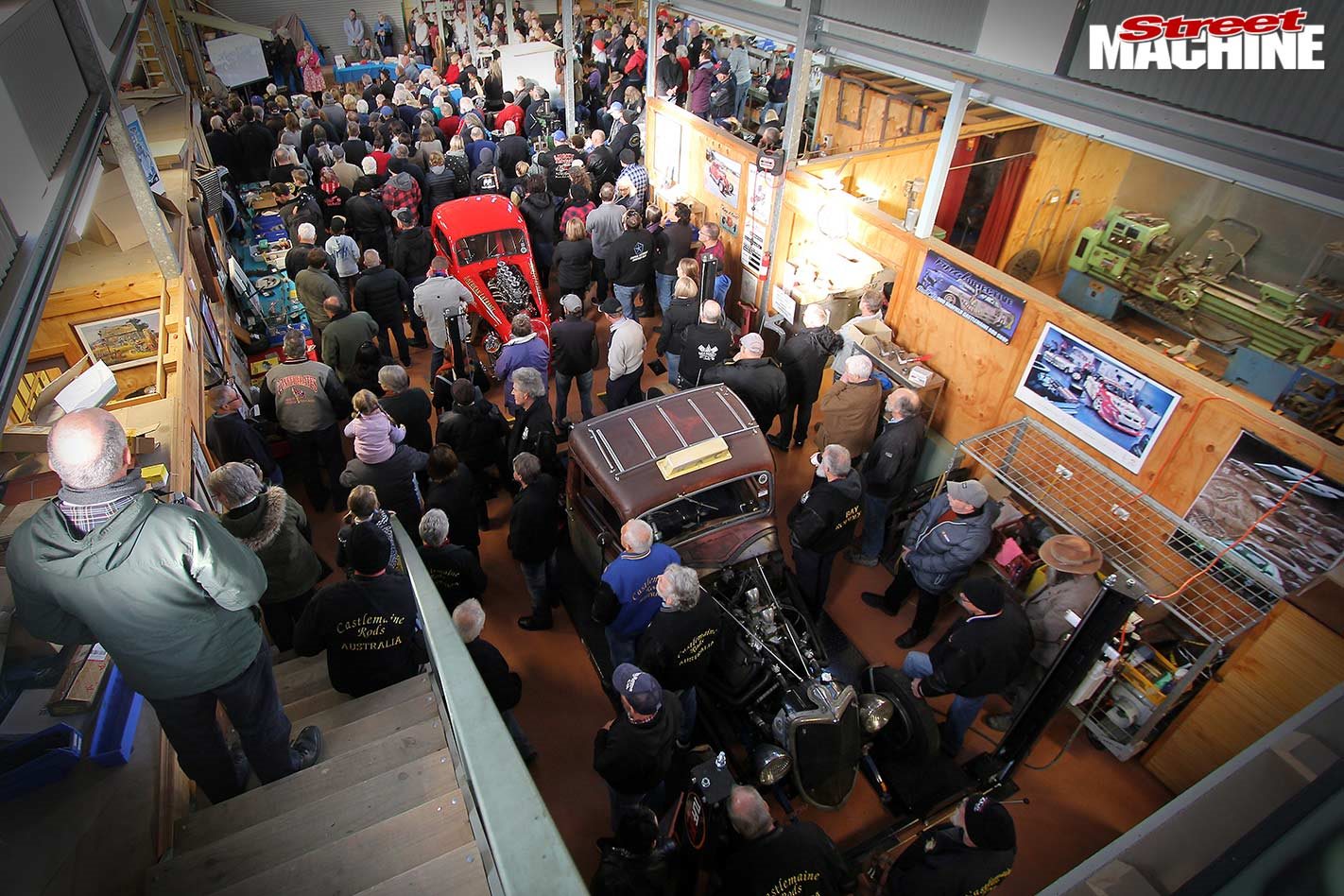 The Mad Scientist of Australian Hot Rodding: Rod Hadfield was launched in June at Hadfield Hot Rods in Chewton, Victoria, with a large crowd in attendance. The car park was chock-full of hot rods and street machines, and inside the museum it was standing room only, with many punters forced to stand outside. Eddie Ford – himself a legend of the Castlemaine hot rodding milieu – kicked off proceedings with some great anecdotes from Rod’s early days. Rod returned fire and spoke of how honoured and humbled he was by the turnout. 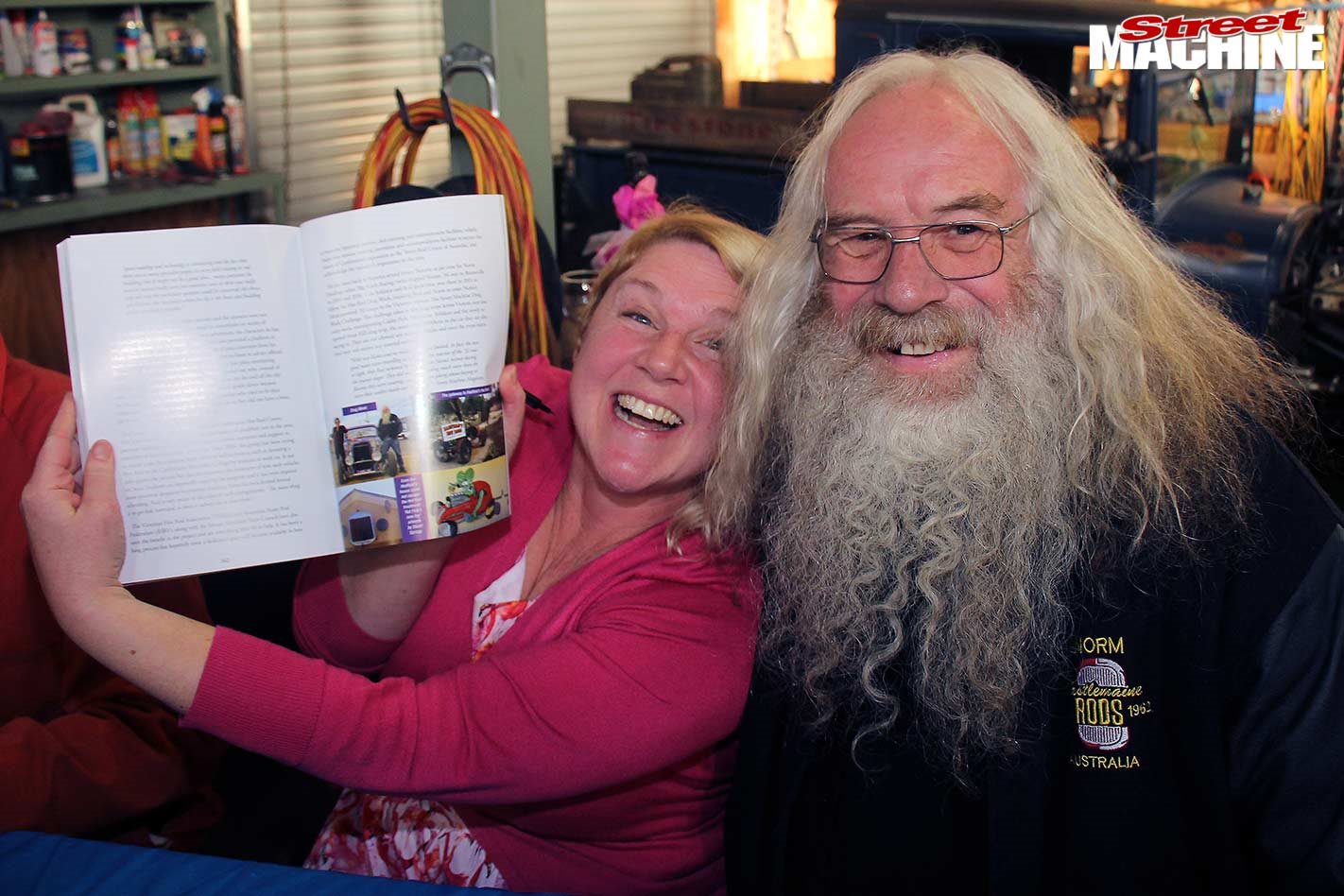 Yours truly presented a slide-show of Rod and Carol’s adventures through the years as documented in Street Machine, and Allison (that is her in the pink, above) gave the crowd an insight into the writing of the book. During all of this, Rod had disappeared from view. What was he up to? Rod is something of a stickler for respectful behaviour on formal occasions like this, so where would he go during his own do? 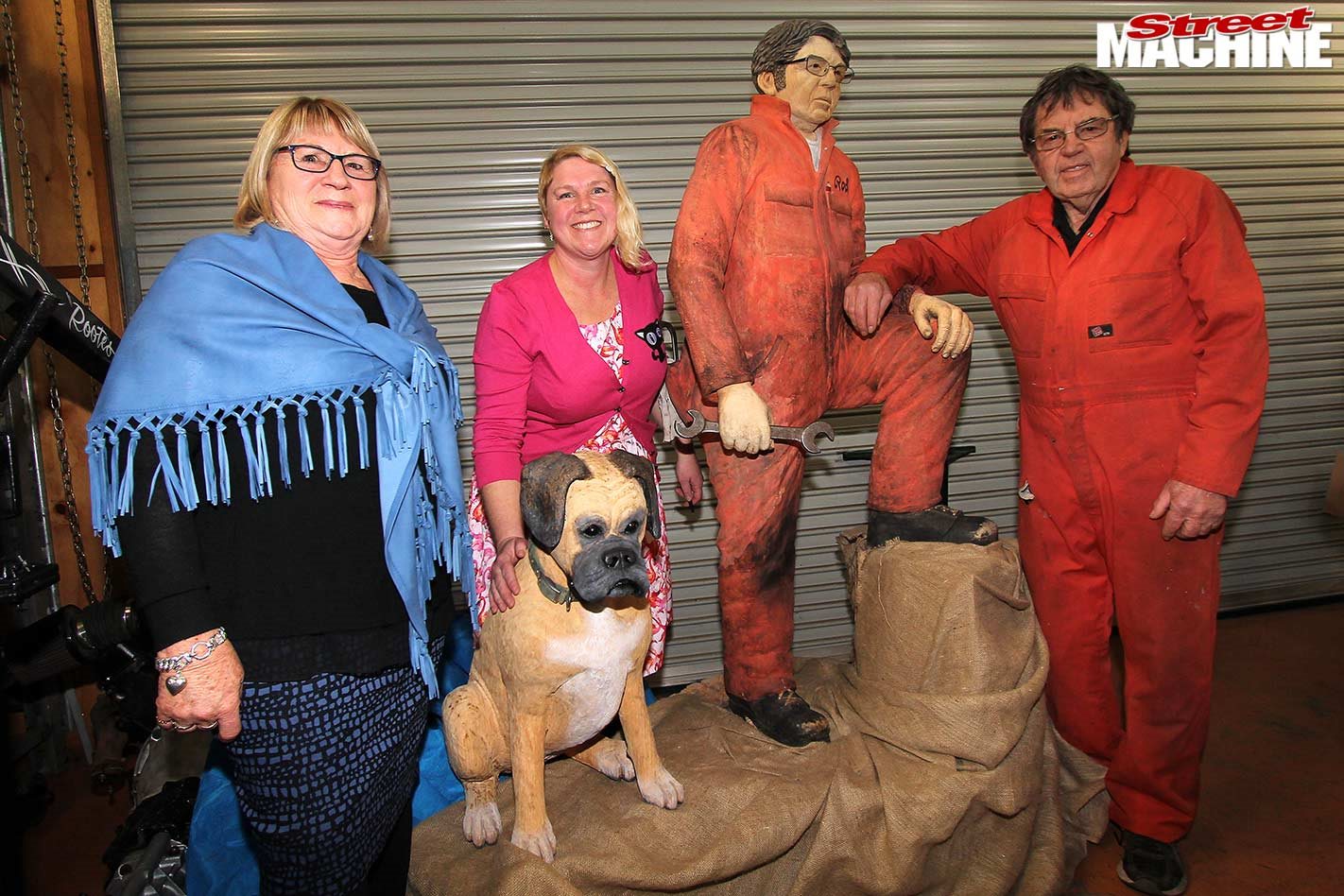 All was revealed when sculptor Richard Yates pulled the cover off a life-sized wooden sculpture of Rod and his shed mate Cody the boxer – with Rod standing beside it in his orange overalls.

It was quite an occasion. Hot rod history is my thing, and it was amazing to be talking about it with people who saw much of that history happen, surrounded by the majority of the cars that Rod has built over the past five decades. 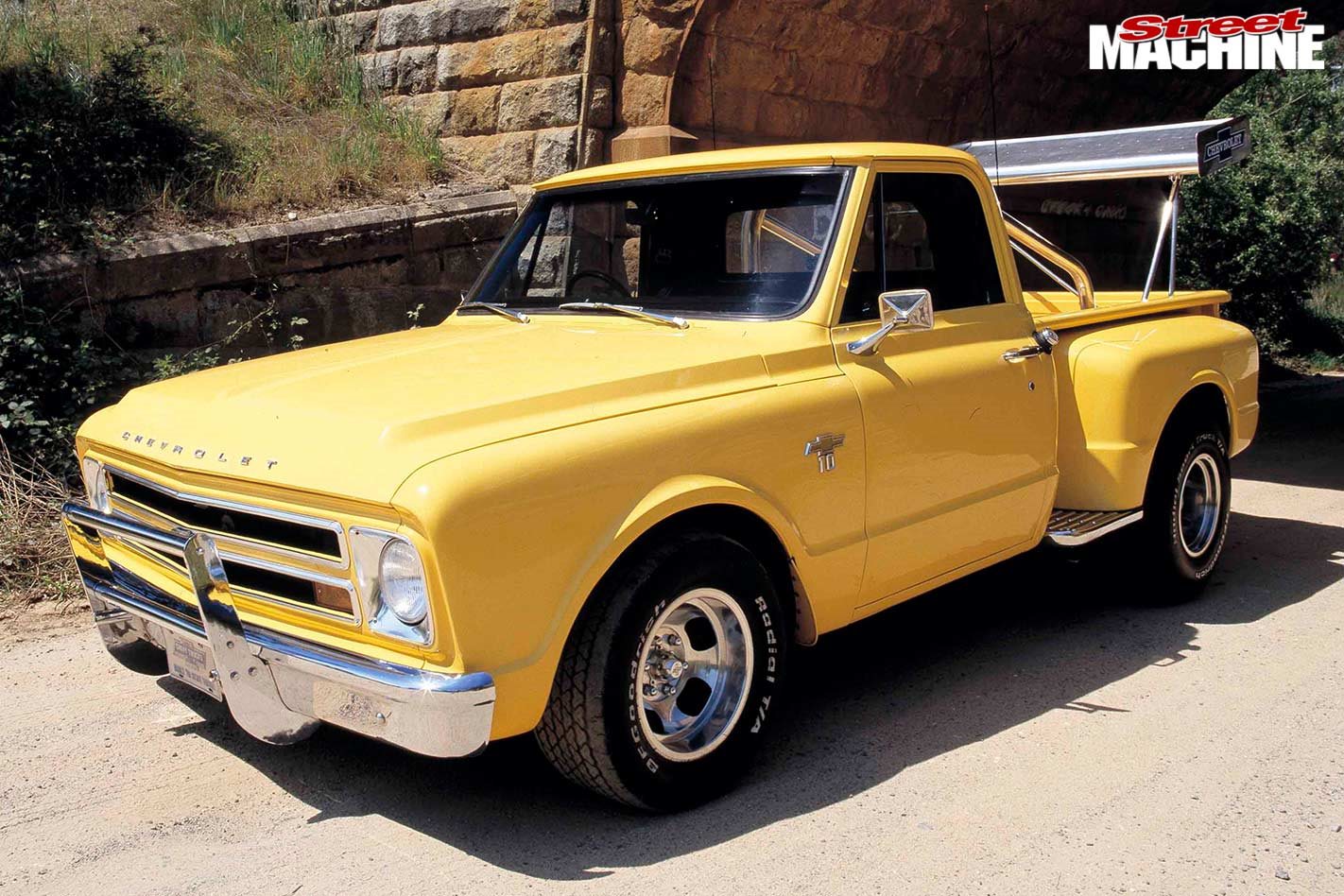 1. Rod‘s tough Chev C10 was the first Hadfield creation to be featured in Street Machine, circa April/May 1983. 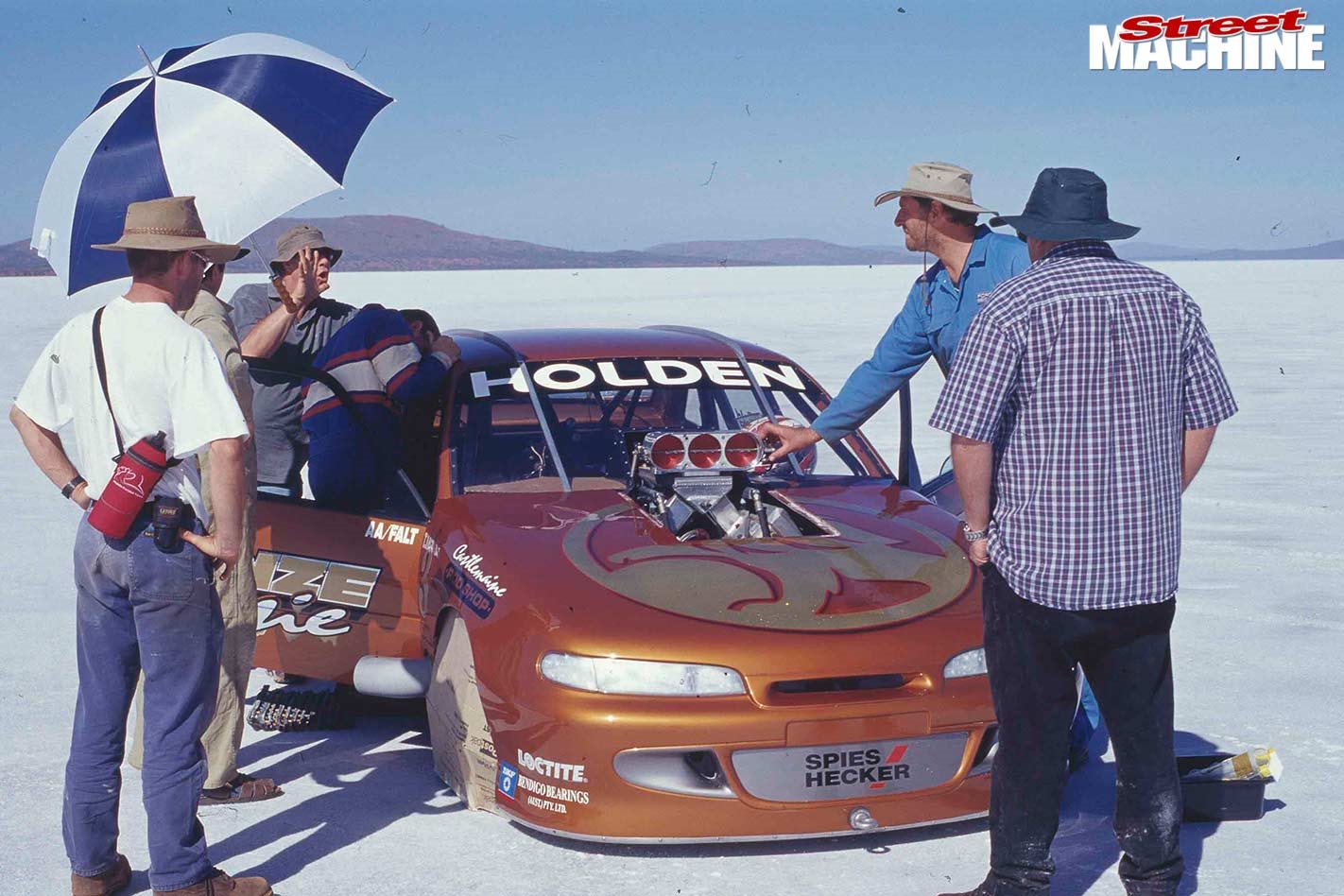 2. Rod has pursued land speed racing with vigour since the first DLRA meeting on Lake Gairdner in 1990. He was the first man to join the 200mph club in the Salt Shaker dragster, then went to race the Bronze Aussie Commodore in Australia and a Studebaker at Bonneville in the US. 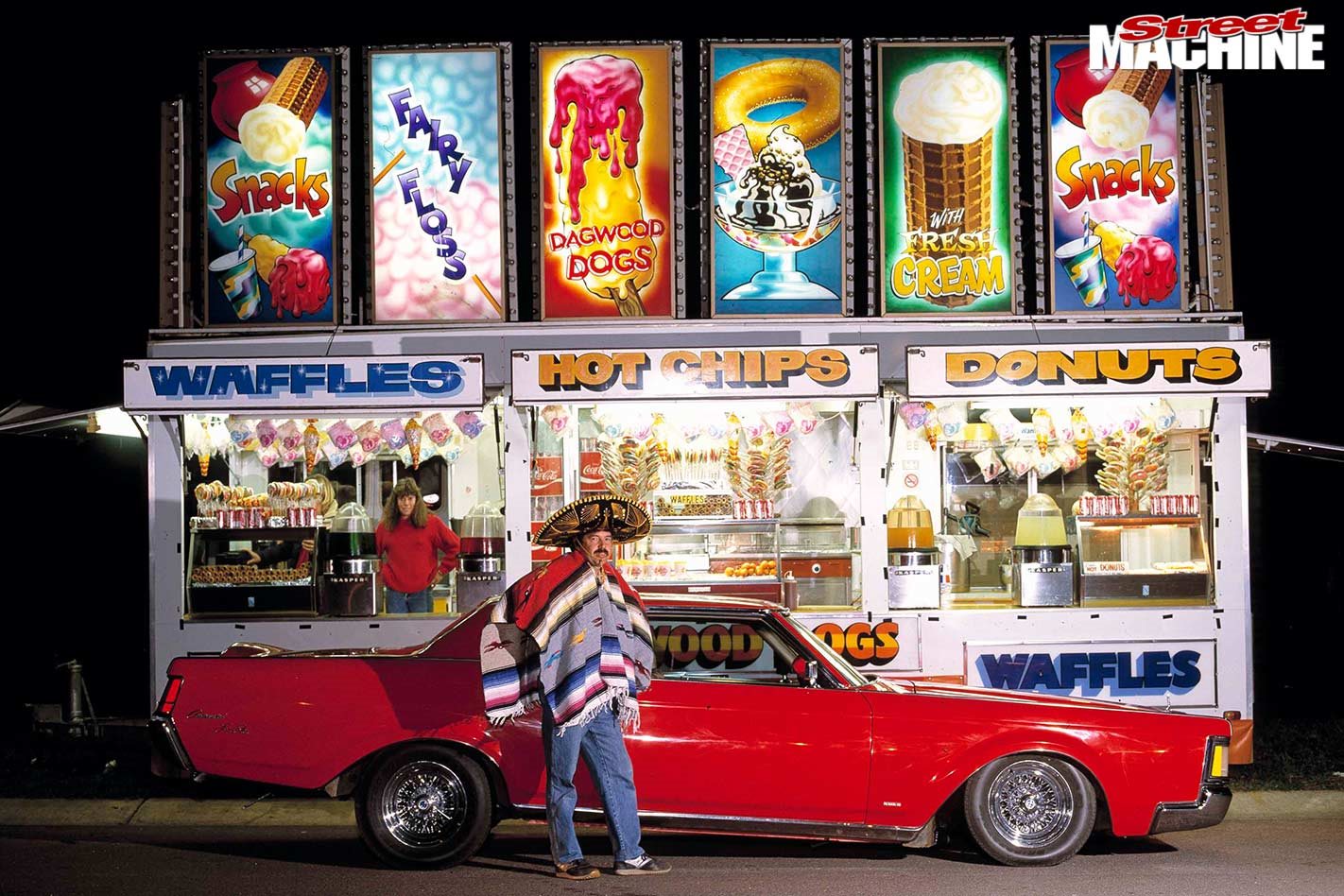 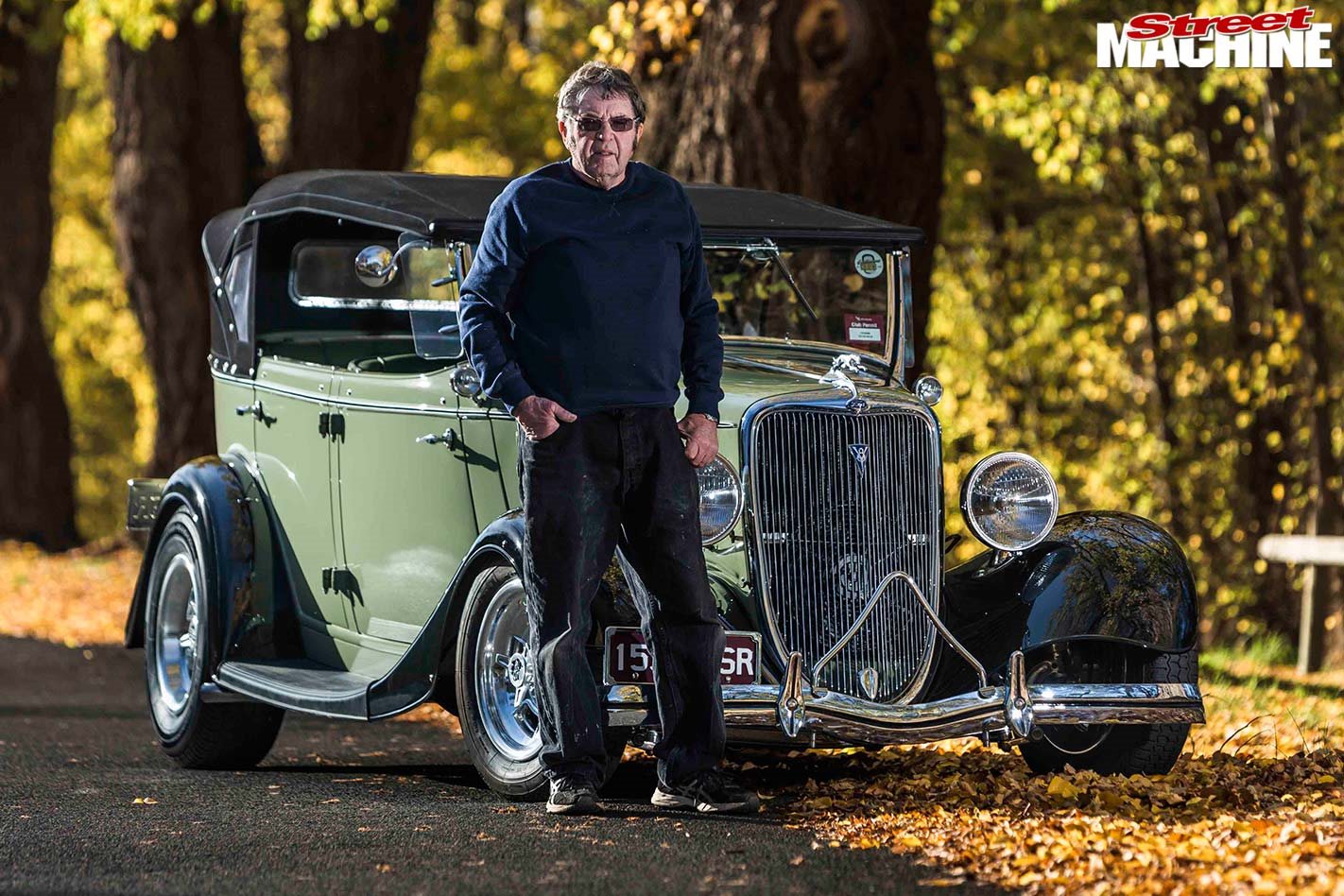 4. We feature Rod’s latest (and supposedly last) build, a stunning 1934 tourer, in the new issue of Street Machine Hot Rod, out now! 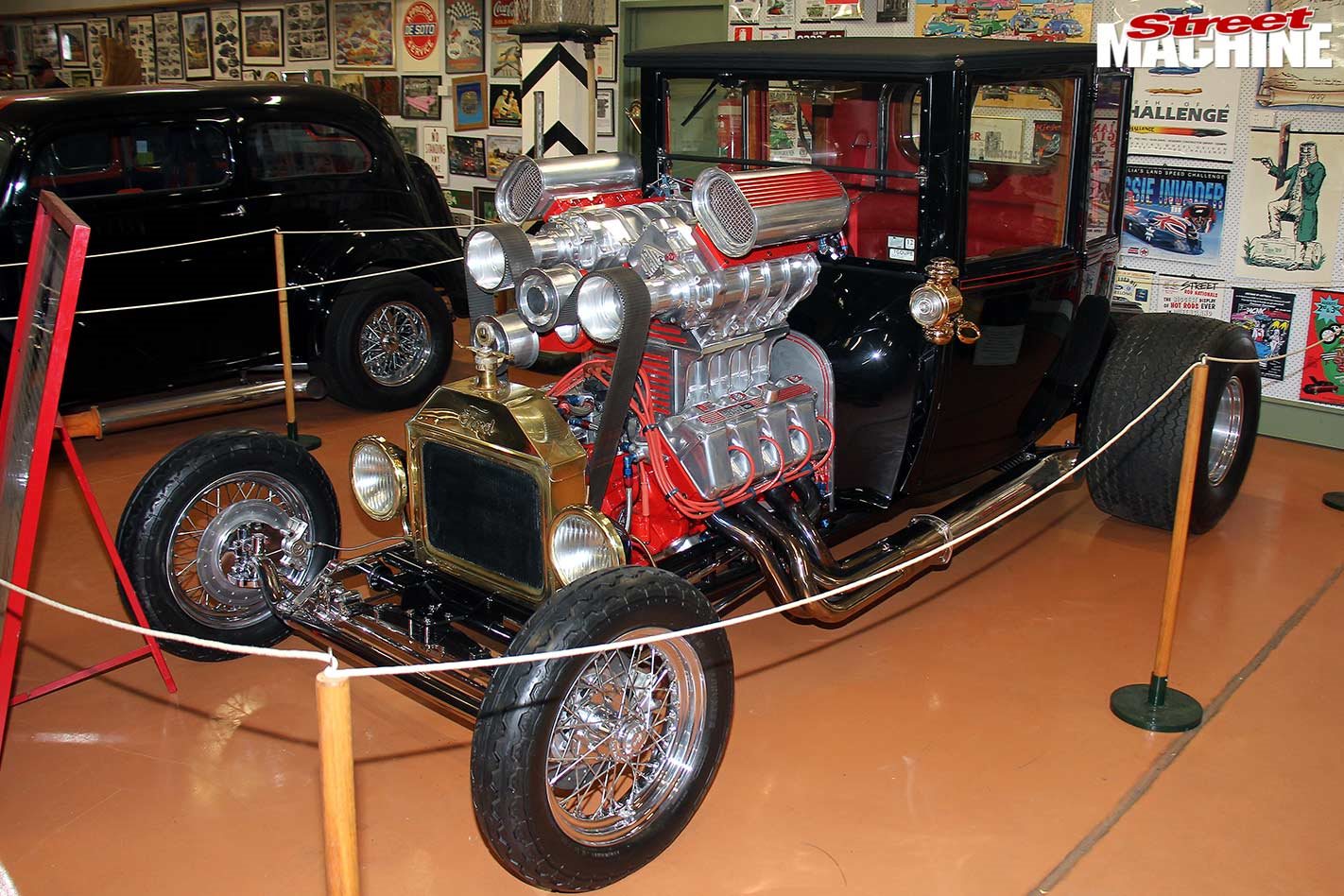 5. Rod’s twin-blown Boss 429-powered T-model coupe was a mind-blowing car in its day and remains a stand-out. You can check it out at Hadfield’s Hot Rods in Chewton. 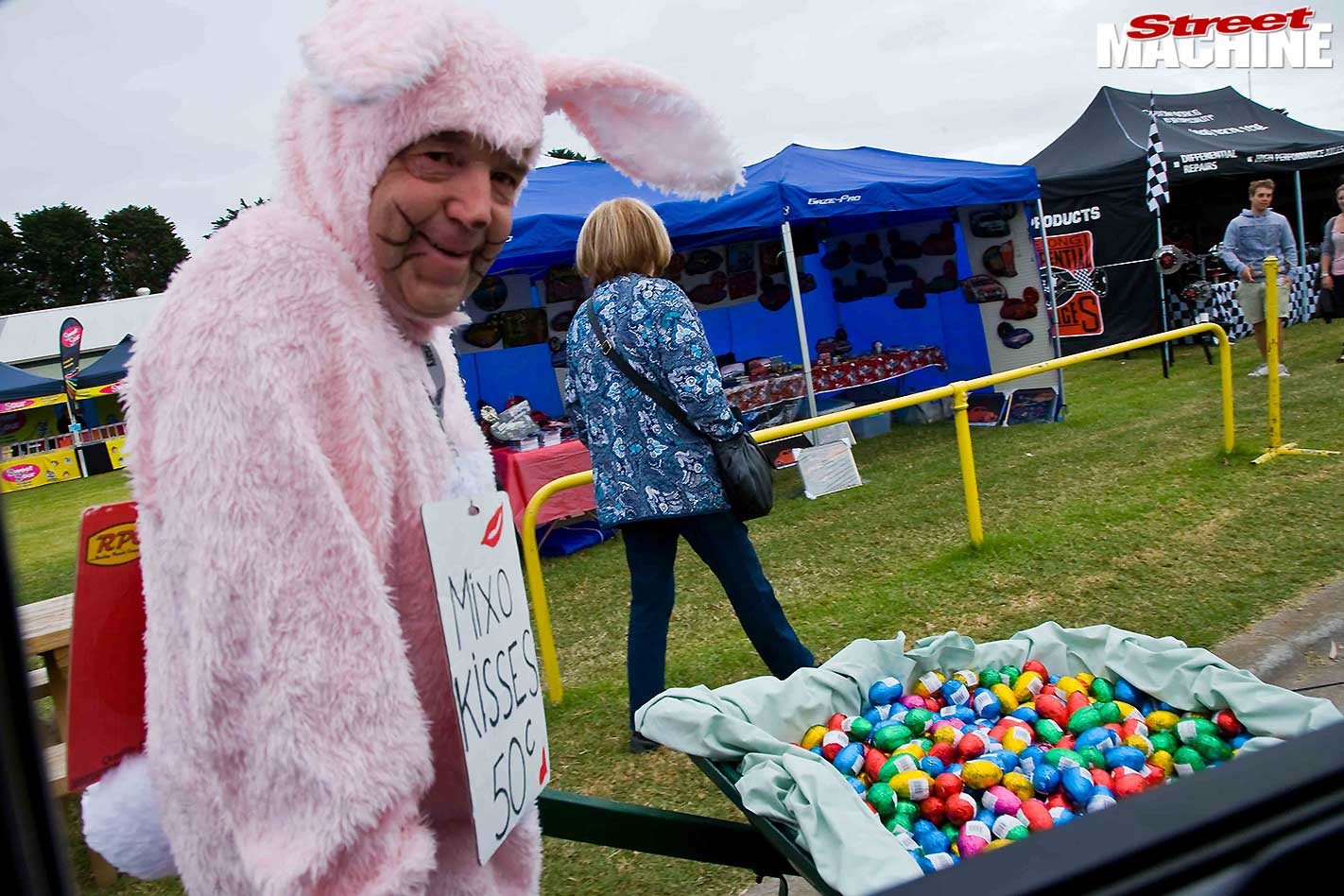 6. Anyone who thinks Rod doesn’t have a sense of humour doesn’t know him very well! Here he is distributing easter eggs and mixo kisses at the 2011 Street Rod Nationals in Geelong.