ONE LOOK at Holden’s Efijy show car and you just know there are some serious petrol heads buried deep within the company’s design bunker. Holden has long led the way when it comes to show-stopping concept cars in Australia with eye-poppers such as the Hurricane and GTR-X in the 60s and 70s, and the Monaro coupe that blew everyone away at the 1998 Sydney Motor Show. No doubt there’s more than blood coursing through the veins of the guys at Holden Styling Central.

In between these great show cars have been endless product launches for the grocery-getters. When the bosses weren’t looking they would sometimes open up about the cars they’d really like to build, so there was always a hint that under the pinstripes was a more primal beat going on. But no-one ever thought they’d build something like Efijy, the wild custom that stole this year’s Australian International (Sydney) Motor Show.

We drive the Holden Efijy! 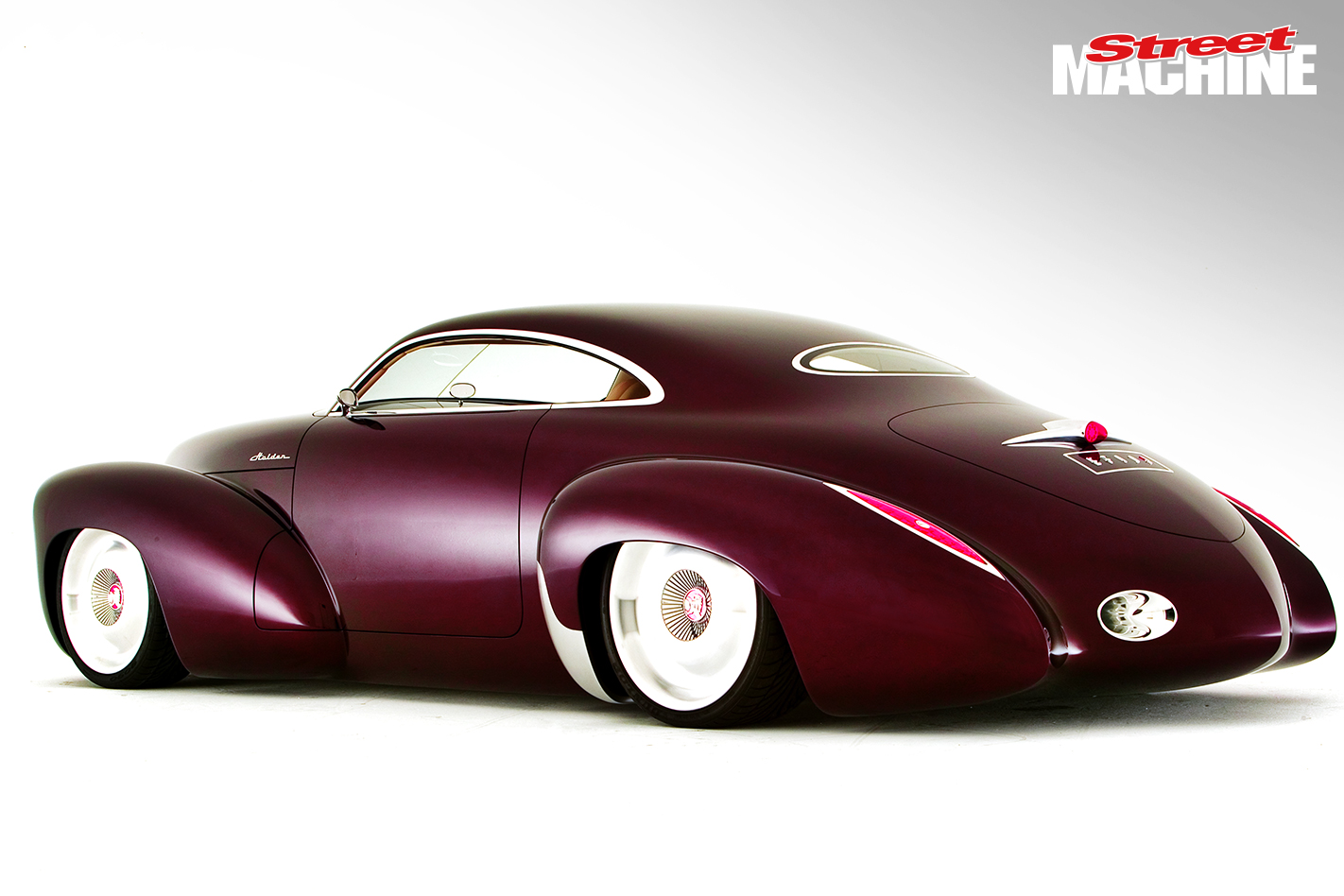 “It’s automotive entertainment and purely for promotion,” explains Efijy’s father figure, Richard Ferlazzo, who has harboured a dream to build a classic custom car for close on 20 years. “Efijy reaffirms our style focus, as well as our performance focus with the Corvette underpinnings, and it sells the message that the guys who bring you Commodore also have a passion for cars,” Ferlazzo says.

It took a while to come together. Other show cars like last year’s Torana TT36 had priority, so too the Elfin sports cars, but Ferlazzo’s persistence finally paid off when he got the green light to finish his pet project and take it to Sydney this year.

Efijy was a Ferlazzo brainchild from the start. Although he’d never built a hot rod or custom before, he has admired the work of American custom car greats like the Barris Brothers and Boyd Coddington. 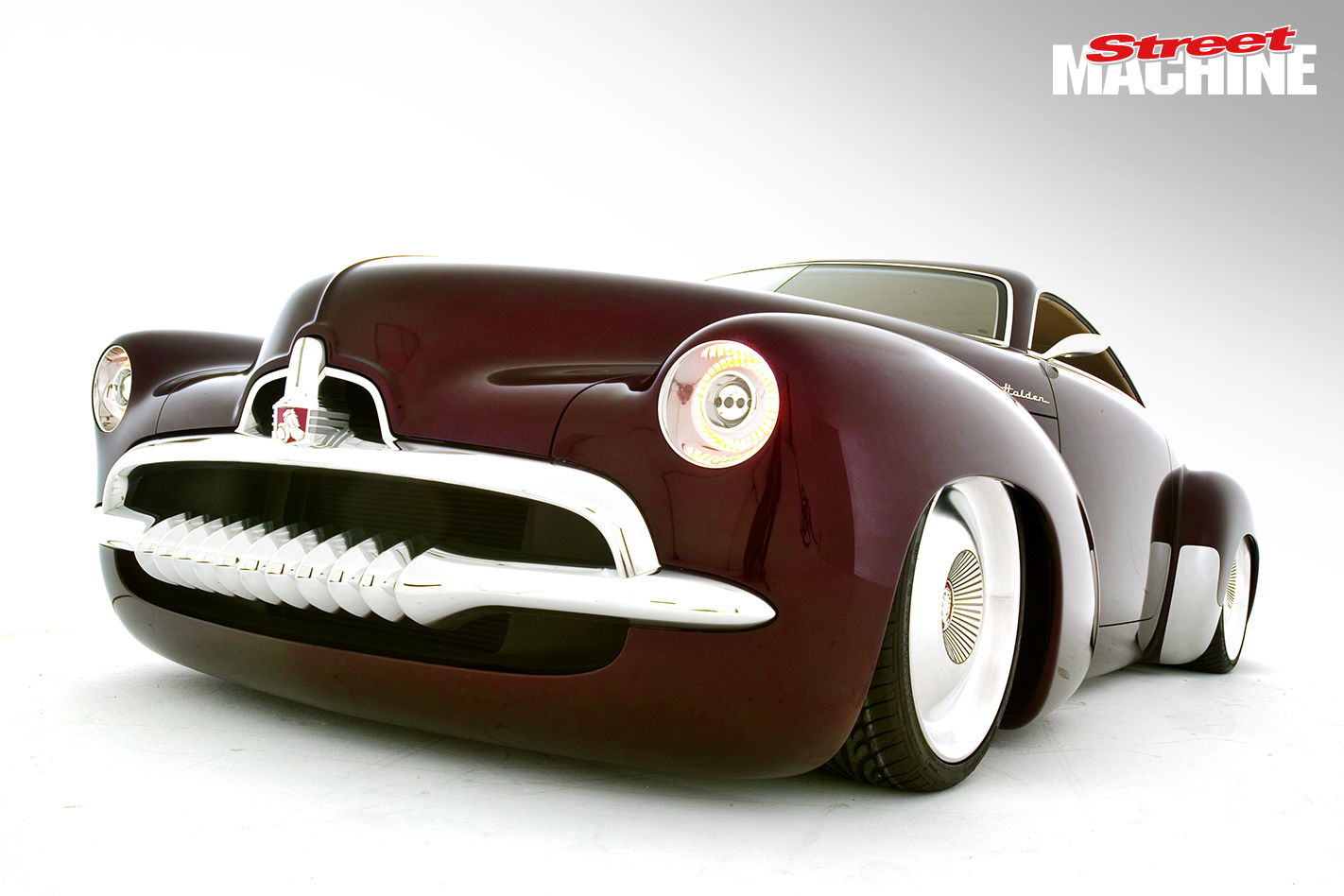 It was CadZZilla, a swoopy custom built by Coddington for ZZ Top’s Billy Gibbons, that grabbed him by the nuts. Based on a ’48 Cadillac two-door Sedanette, CadZZilla was designed in the late-80s by Larry Erickson, a young Californian who worked for GM in Detroit but had fun with hot rods in his spare time.

It was at the GM Design studios that Ferlazzo met Erickson and told him that one day he would build his own custom. “The idea sat in the back of my mind for a long time,” says Ferlazzo, “but around 2002 Holden was well and truly in the show-car scene and we were looking for something different. With the FJ’s 50th anniversary coming up, I reckoned it would be really cool to do a wild show car around that.”

Because he was designing a show car that would never have to roll down a Holden production-line, Ferlazzo’s custom FJ was free of the restraints that come from day-to-day car company reality.

Ferlazzo showed his sketches to Holden’s then design head, Mike Simcoe, who gave the go-ahead to make a one-third scale model. Final approval to build the car had to come from Holden’s board of directors,  and then only after Chairman and Managing Director Denny Mooney gave it his thumbs-up. 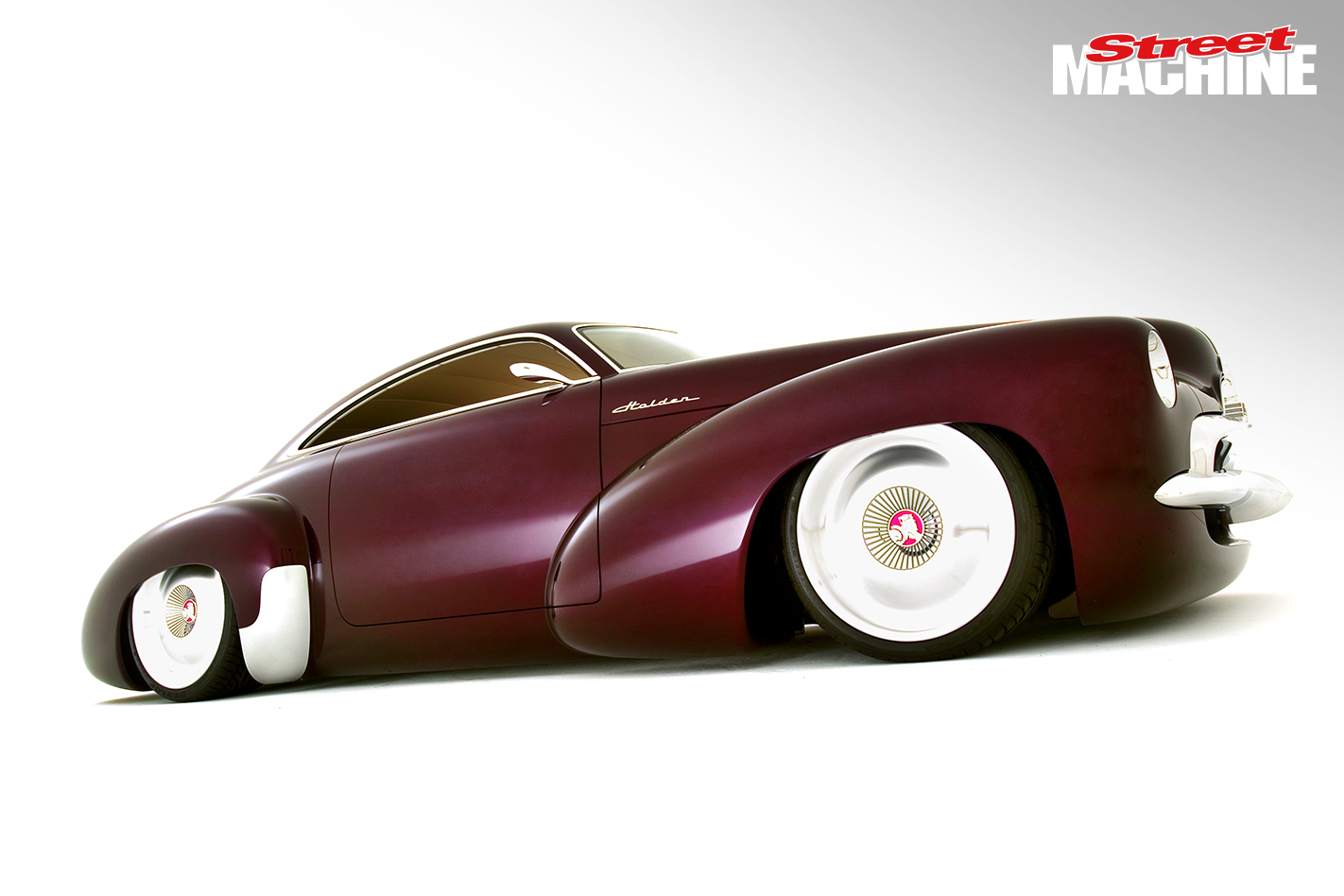 The only constraint the top brass put on Ferlazzo was cost; his dream machine could cost no more than around $200,000. That’s peanuts in the world of show cars. “American show-car builders wouldn’t get out of bed for less than about $1.5 million,” Ferlazzo says. “They’re up to $5 million and more these days.” The budget didn’t include labour, of course. That would have pushed the cost way out, and killed the beast stone dead.

With official approval to build Efijy, the first step was to produce a full-sized clay model. This was used to refine the final shape and then produce the fibreglass body that would ultimately sit on top of a modified C5 Corvette chassis.

The choice of the Corvette was pretty simple, really. One was sitting around Fishermans Bend, having been used for testing, and it was going to be scrapped. The ’Vette came at the right price and it had all the  mechanicals needed for the project. 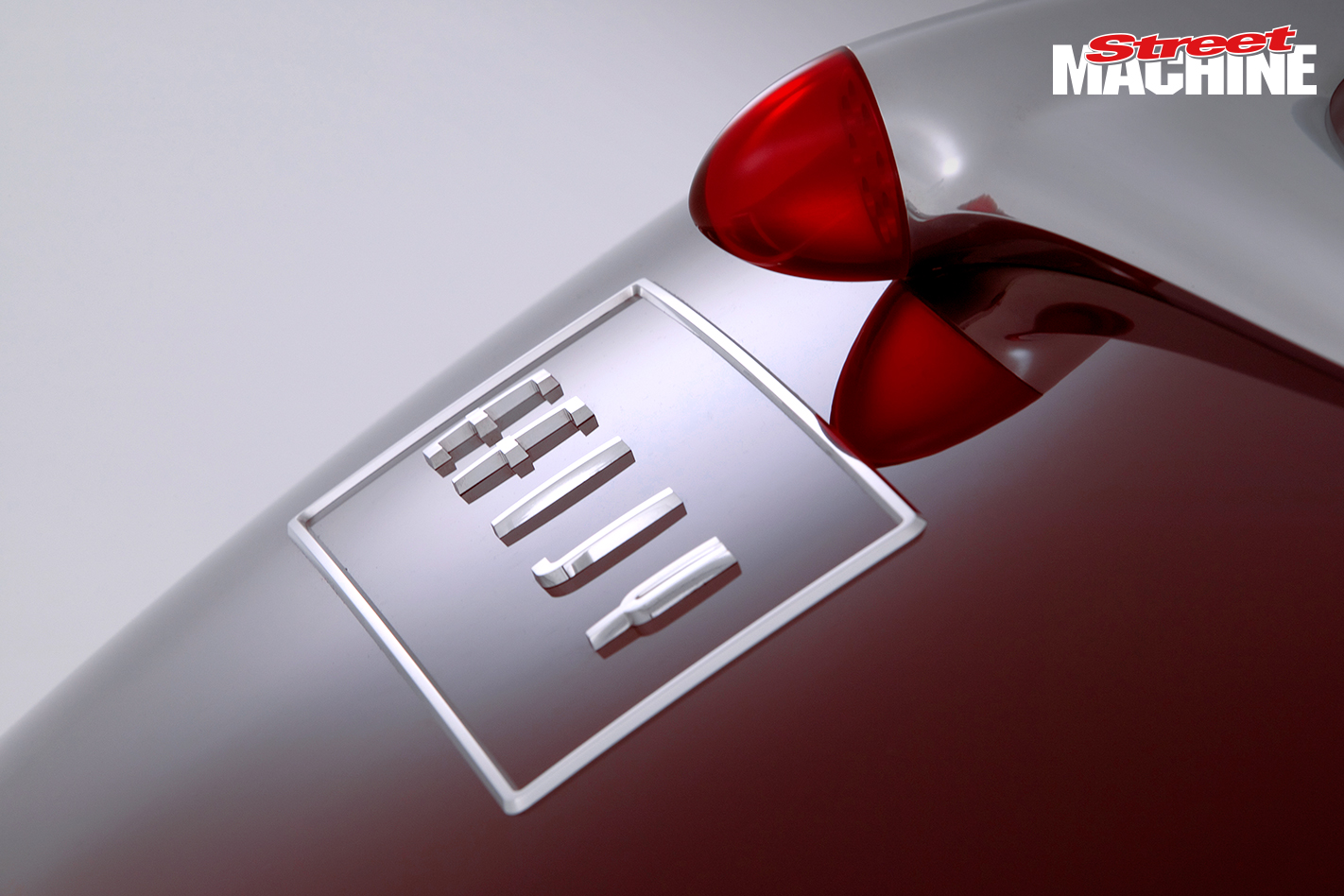 The chassis had to be extended to fit the body, but that was relatively simple, according to Ferlazzo. “The Corvette platform is made from square sections that were easily extended,” he said. The only concern was the torque tube connecting the engine to the rear-mounted transaxle. It had to be lengthened, but that was quickly solved because Corvette’s torque tubes are actually produced in Melbourne!

Ferlazzo’s motivations for selecting the FJ for his dream machine were numerous. Obviously there was the anniversary of the FJ, which is regarded as the company’s heritage model – the one that somehow defines what Holden is all about – but there was more to his madness than mere nostalgia.

Lurking in the back of his mind was CadZZilla, which became his primary influence. The Boyd-built custom adopted the Caddy’s lines, cleaned them, smoothed them, and stretched them. The result was classic in its roots, yet thoroughly modern in their interpretation. 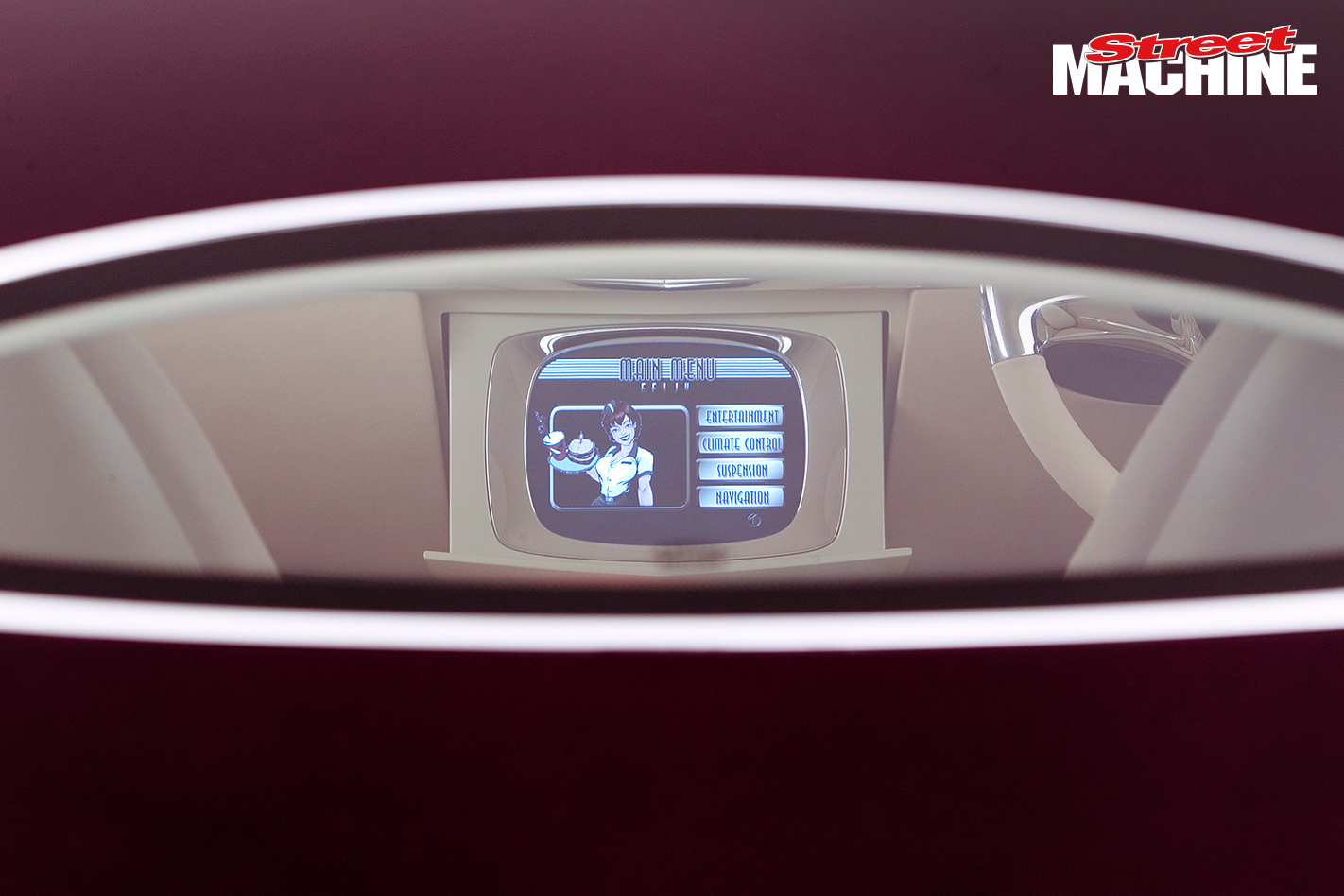 When Ferlazzo ran his thumb down Holden’s stable, there was only one car that had the form he could work with to produce his classic custom: the FJ. “The FJ was from the right era and had enough form to work with,” he says. “It would be great to work through all the old Holdens, but the FJ was the logical one to start with.”

The FJ isn’t an easy car to customise while retaining its essence, though. Many have tried over the years, but not all have succeeded. The biggest problem is that the original car’s dimensions just seem to make  it hard to get that real custom look.

Starting from a clean sheet of paper gave Ferlazzo the freedom to create Efijy in the right proportions. He wasn’t slicing and dicing an original steel body, but making a one-off fibreglass shell that paid homage to the original without being constrained by it. 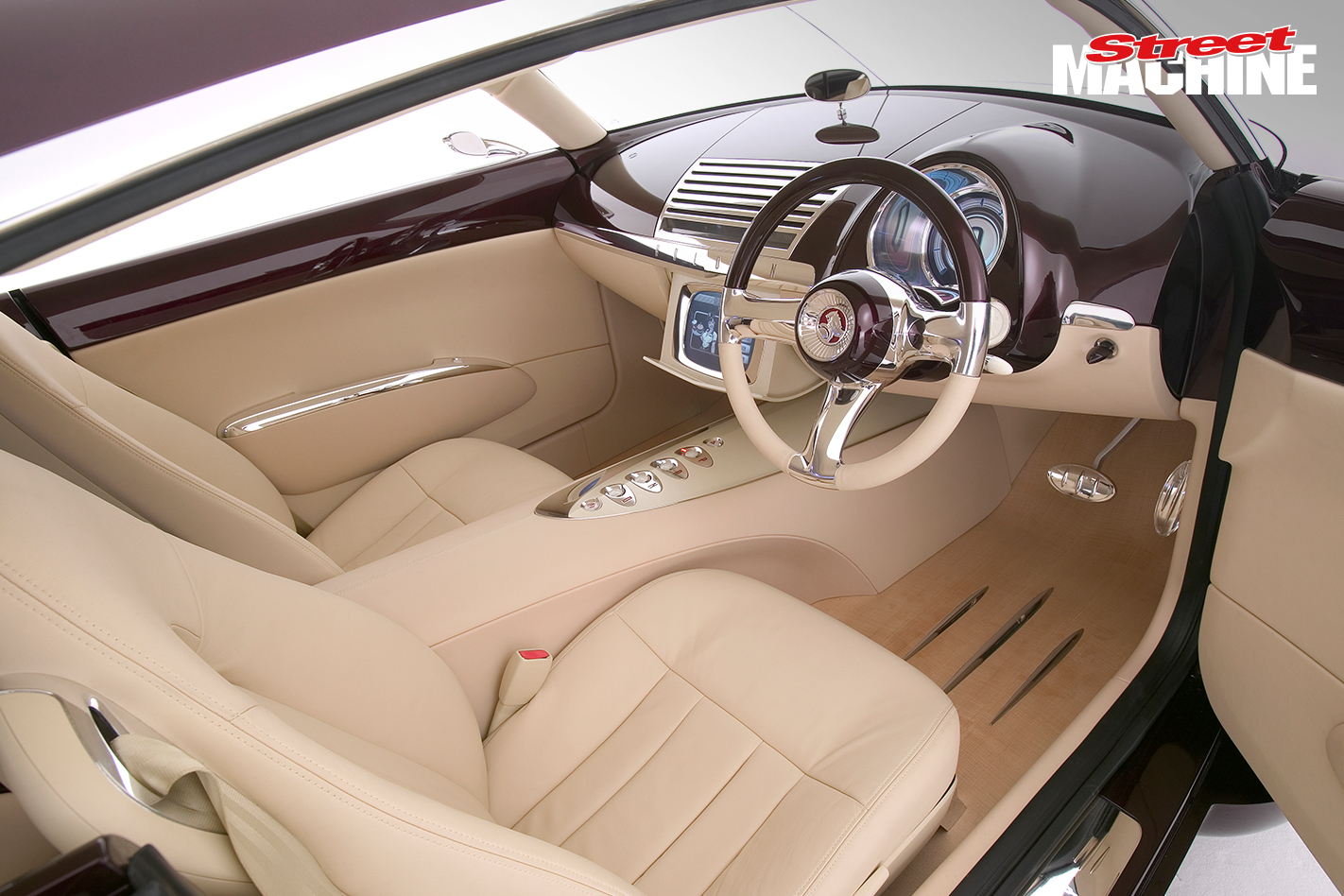 And that’s the key to Efijy’s incredible appearance. Ferlazzo has successfully incorporated enough styling cues into his dream design to make it instantly recognisable as an FJ . The bullnose bonnet, front and rear guards, A-pillar, grille, badges, and bootlid-mounted centre tail-light all echo Holden’s seminal 1948 design.

They all spell out FJ, but that retro layer cleverly hides the reality that Efijy is much, much bigger than Holden’s golden oldie.

It’s 5.2m from bumper to bumper, a whopping 800mm longer than the original. And almost two metres wide, or 300mm wider than the FJ. The custom version’s roof is a mere 1.27m off the deck with its airbag springs dumped for show, compared to the production car’s lofty 1.6m.

“It’s as long as a Statesman, as wide as a Hummer and as high as a Monaro at its normal ride height,” says Efijy’s creator. Being so long, wide and low gives it the proportions that make it work as a custom car. 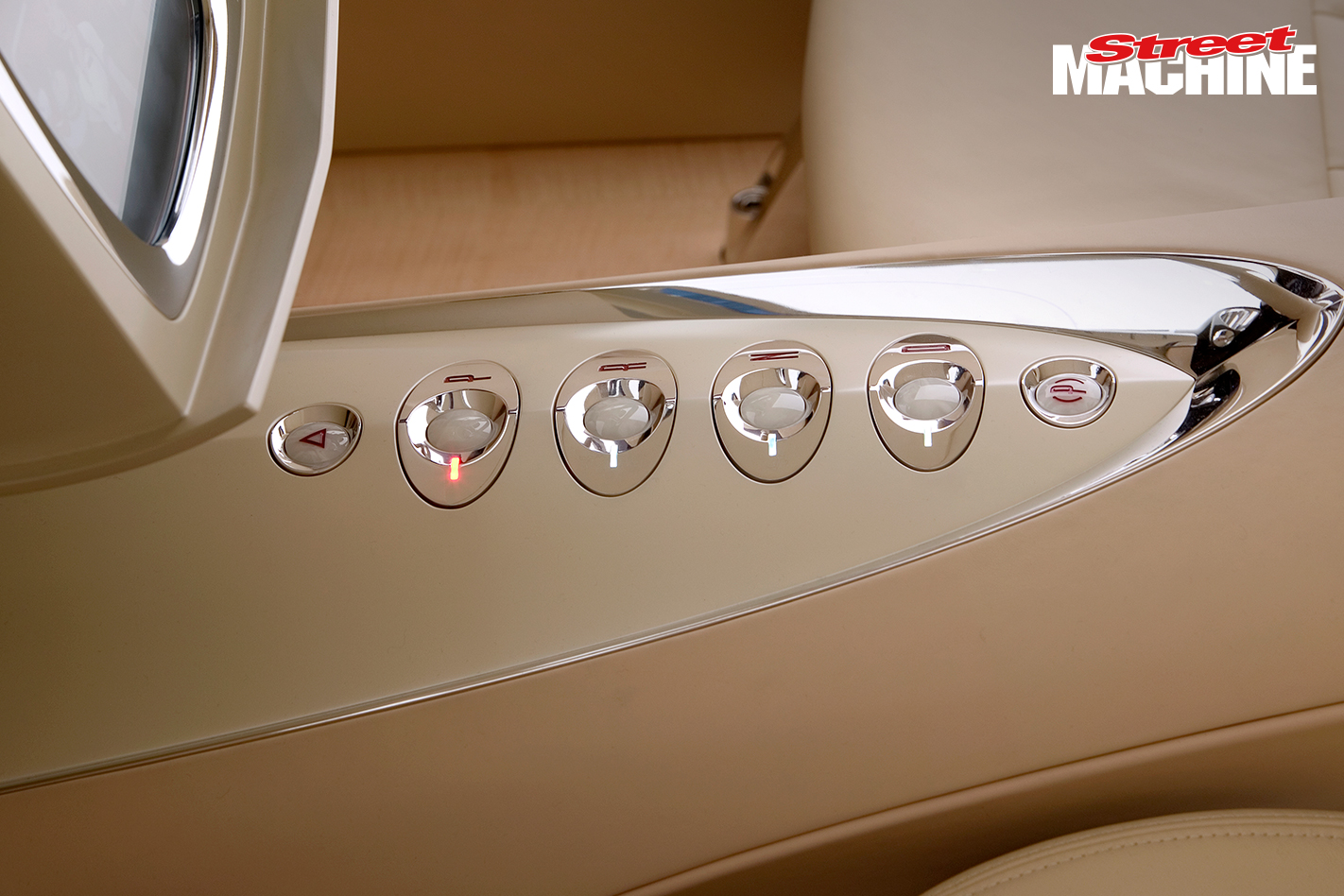 The two-door pillarless coupe body was produced from a mould taken from the full-sized clay. It was a complicated mould, with 18 individual sections needed to capture all of the intricate curves.

With the body produced, the paint was laid on. House of Kolor’s Owen Webb was called on for help choosing the colour and then supplying the materials. They came up with a custom blend that Ferlazzo named Soprano.

“It had to be dark and sinister,” he says. “And Soprano seemed the perfect name.” It starts with a metallic blue base, overlaid with multiple layers of translucent reddish candy to give it a deep and dark berry hue that emphasises the shape.

The exterior trim, including the grille, are made from billet and hand-polished to a mirror finish by the Holden team. The LED lights were custom-designed and produced at Holden with some hi-tech help from lightmaker Osram. 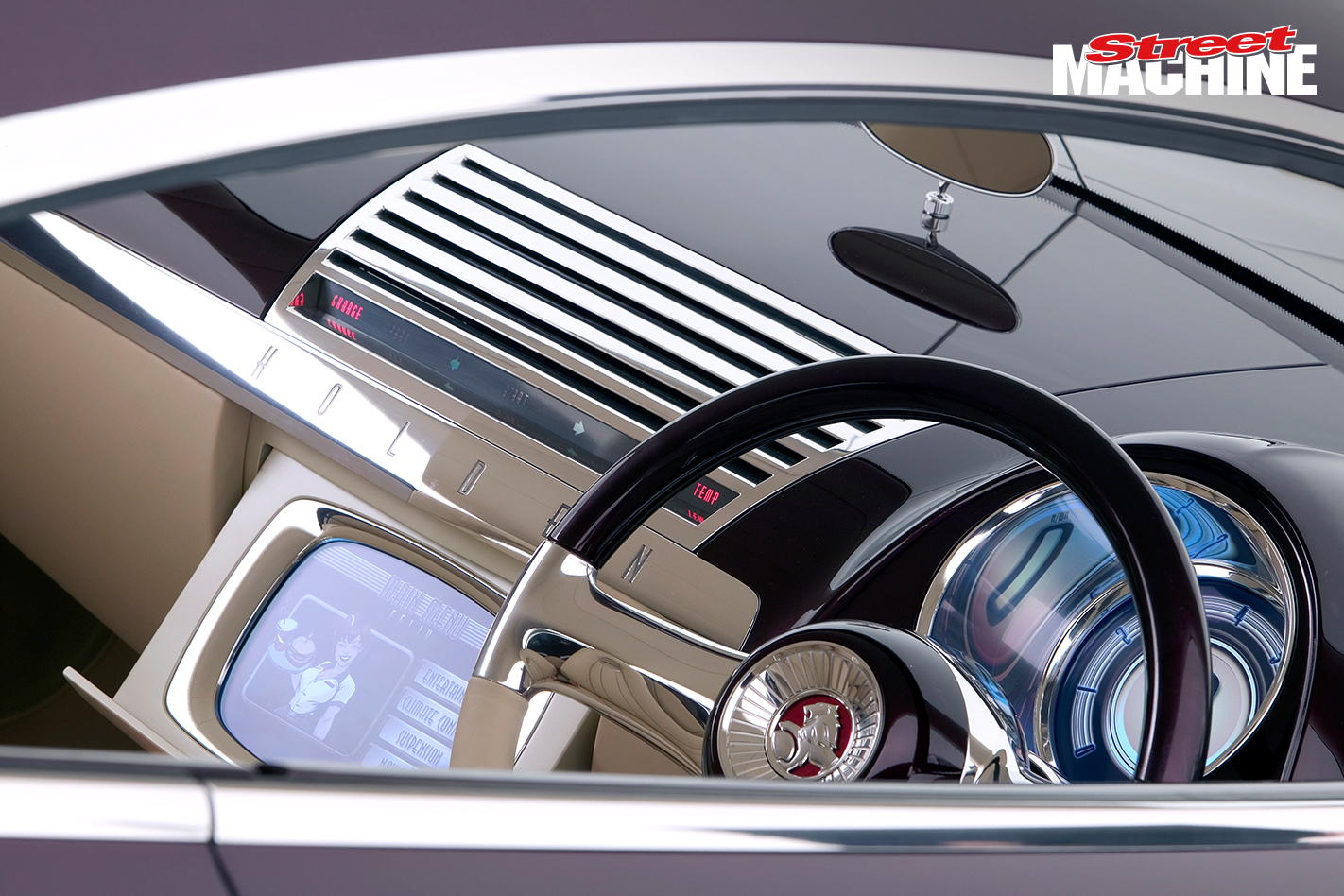 The headlamps consist of three high-intensity LEDs, surrounded by LED rings which flash amber as turn signals. Osram’s technicians were worried about the temperature generated in the lamp housings, so they added a fan to keep things cool. Ferlazzo reckons Efijy has the world’s first fan-cooled headlamps!

The LED tail light incorporates a ‘blue dot’ brake light, and it turns amber and scrolls down the lamp when the turn signals are activated. A proximity switch operates the doors, providing access to the retro-themed interior. 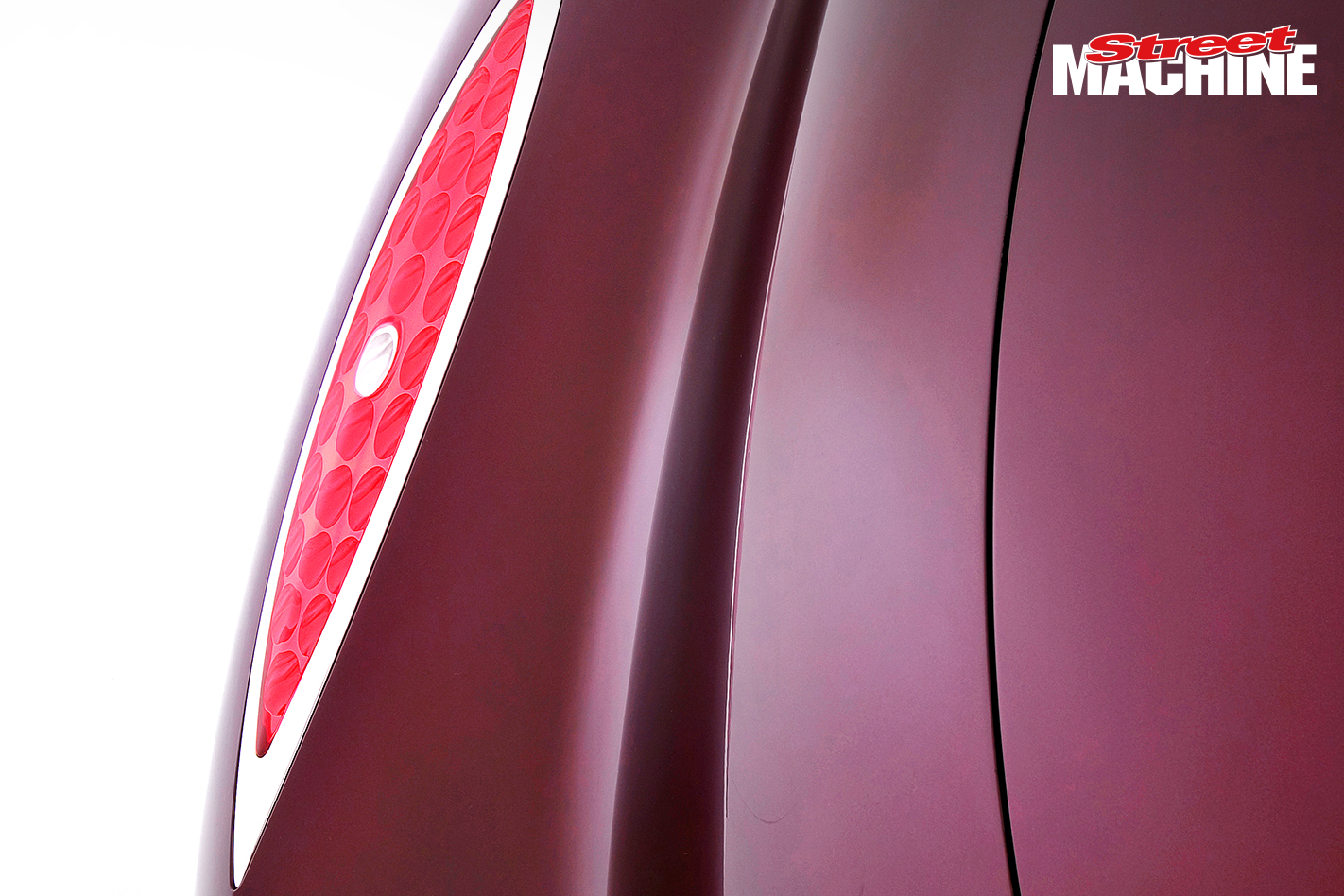 The Corvette donated the seats, which were  modified for more of a tombstone look and retrimmed in cream leather. The same colour was used for the headlining and carpets, as well as the billet steering wheel.

A dash pod reminiscent of the FJ’s original houses the LED instruments, while 3M touch-screens for the controls are hidden in a drop-down panel in the centre dash.

The drop-down panel also conceals the head unit for the Rockford Fosgate audio system. The speakers are also Rockford Fosgate, as is the amp that dominates the boot cavity. 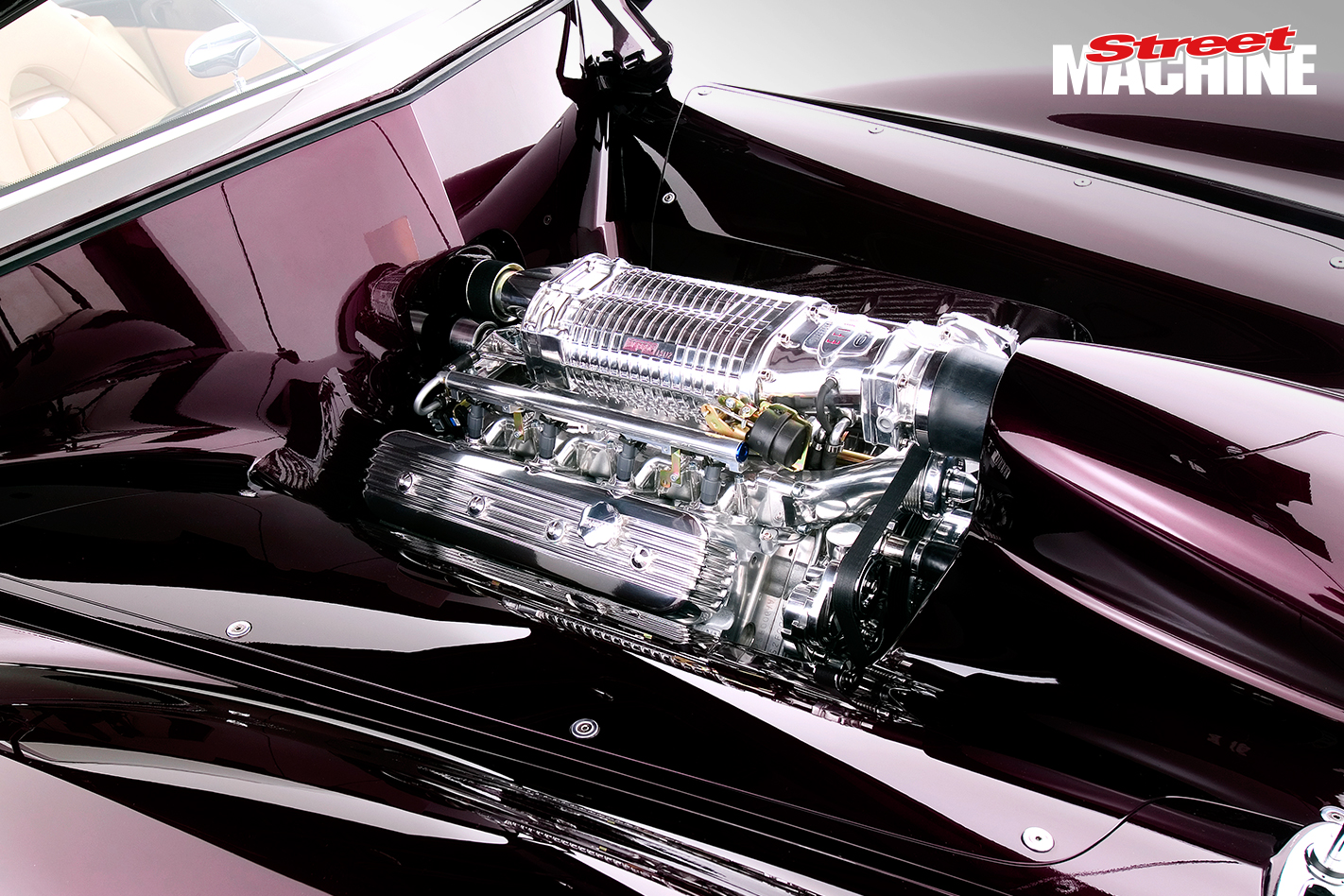 The detail that Ferlazzo and his team have built into Efijy is stunning. Unlike many show cars that are barely functional, Efijy is 100 percent Go. Under the bonnet is a blown 6.0-litre LS2, which should be more than enough to get up and boogie. With 480kW, it has the grunt of 11 production FJs!

That’s thanks to engineering ace Ron Harrop, who found the V8 on his doorstep with a request from Ferlazzo to “breathe on it”. While a stock LS2 would have had plenty of punch, it was important to Holden that Efijy had credibility with street machiners. And why not! 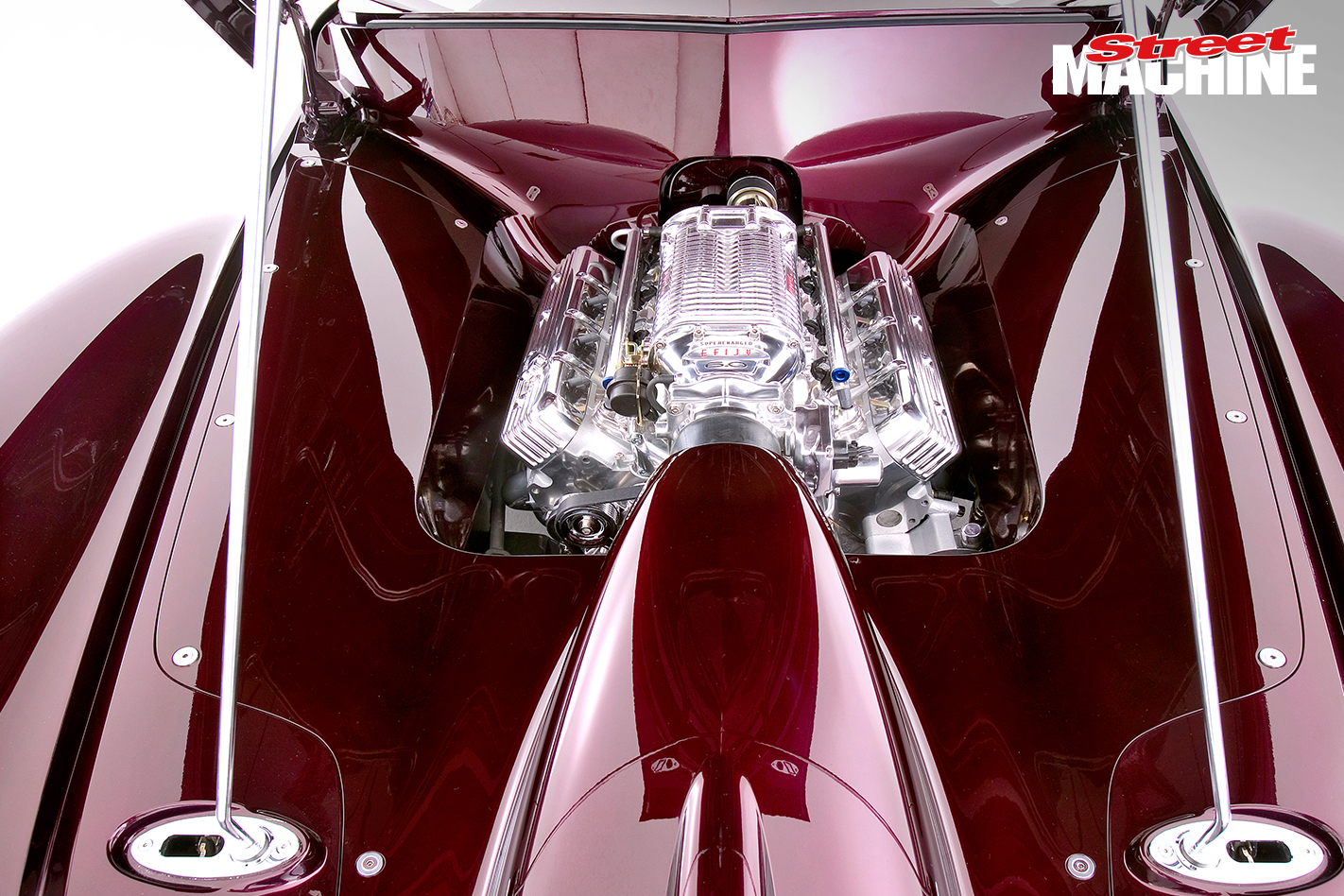 Harrop kept it all as simple as possible. The bottom end was checked to make sure it was in good condition, but otherwise it was left alone. Up top was where the real action happened, with the addition of a Roots-type blower. Power peaks at 6400rpm, while torque is 775Nm@4200 rpm – about the same as a V8 Supercar. Custom block-hugger headers speed the spent gases away through custom-fabricated dual 2½in stainless pipes, and dump them through billet outlets in the rear panel.

The Corvette also gave its four-speed auto transaxle, which works from push-buttons on the centre console, and the limited-slip diff. 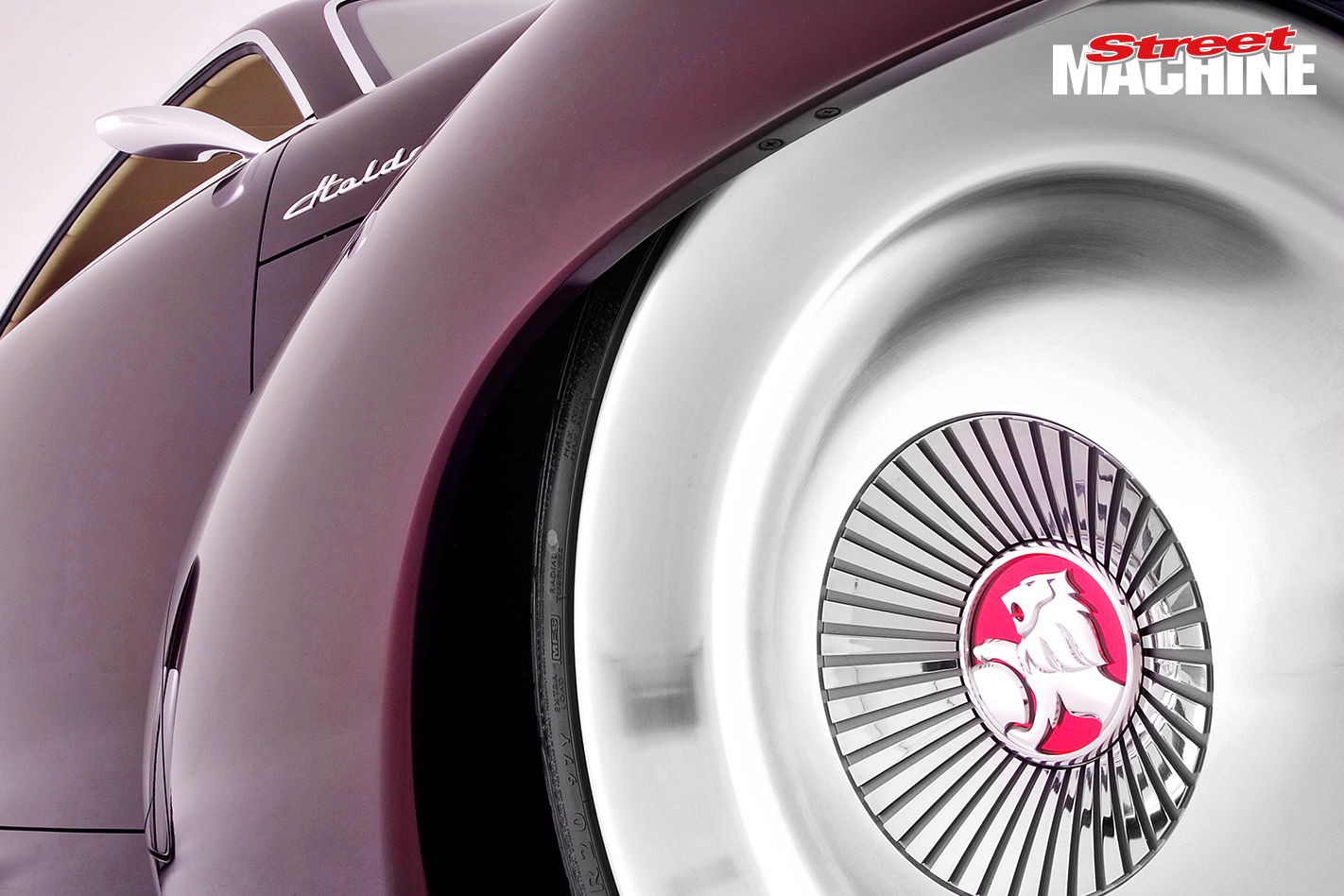 The final piece in Ferlazzo’s puzzle was the amazing set of Harrop alloy wheels, machined from solid aluminium. The 20x9in fronts and 22x10 rears have fluted centres to imitate original FJ hubcaps.

Efijy will make every red-blooded Holden fan stand up and cheer, but there has to be another agenda. It’s an obvious challenge to Ford Australia to create its own custom classic. Sure, Broadmeadows doesn’t go back to the 50s, but with at least two coupes in the back-catalogue there’s potential. The ball’s in your court, guys!