THE STREET MACHINE FILES: BLACK OUT

Here is a classic from our archives, Jeff Jennings’s evil 'Black Out' HQ Premier

HERE is a classic from our archives, Jeff Jennings’s evil HQ Premier. With a Trans-Am front, flared guards, XB GT bonnet and acres of chrome, it was the height of fashion for the time. It was more than just a looker though, powered by a blown small block built by Ivan Walker. The HQ was one of the real tyre-fryers in the early days of NATEX, but it has seemingly disappeared off the earth. Does anyone know what happened to it? If so, let us know! In the meantime, enjoy  the story we published on the car, back in March 1987. 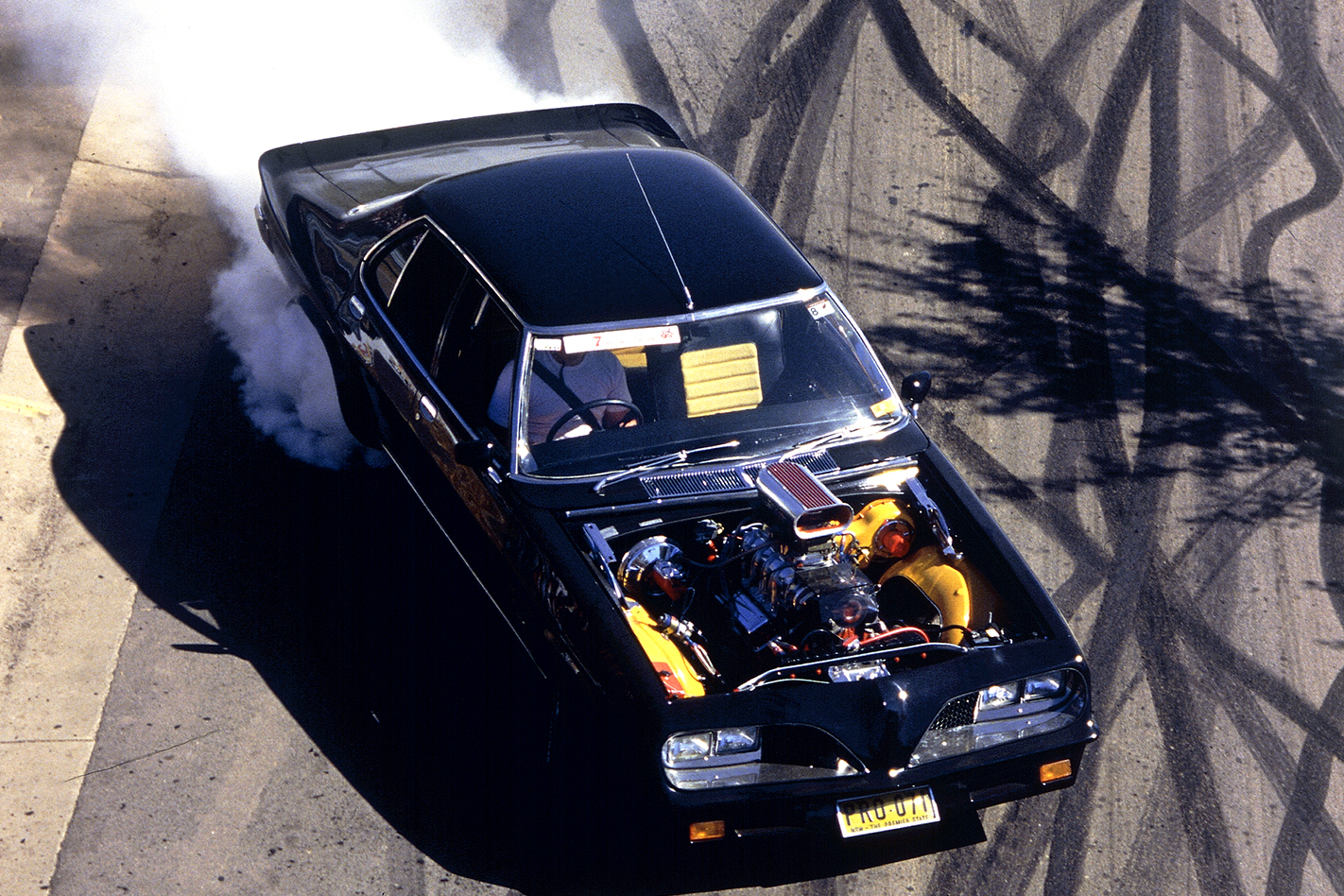 REMEMBER the kids’ show, ‘Black Beauty’? Yeah, you recall that bloody great nag that used to get all the attention for some pretty unanimal-like deeds. Well, you can just see Jeff Jennings throwing a leg under the Roll-a-Door and patting his blown HQ thoroughbred – then climbing aboard and sprinting off into the distance. Okay, so that’s a bit off- track, but so’s this big black beastie. And doesn’t Mr Jennings love it…

This so-natural relationship began when Jeff was passing a repossession yard one day in 1979. He saw a forlorn outline in the corner – a plain, oh-so-ordinary white Premier with customary wear and tear – and begging for a taker. The freckle-faced 15-year-old couldn’t help himself. His piggy bank was prised open and a grand dropped out. 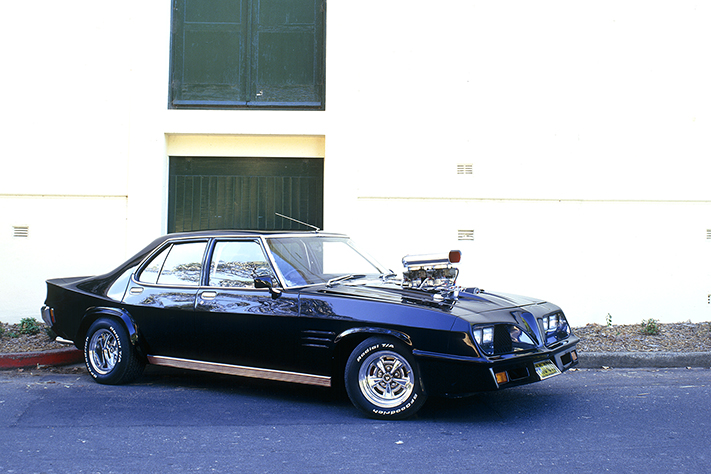 Jeff bought the car from a repo yard back in '79 as a young 15-year-old. At the time it was white and had a 253 in it running on only seven cylinders

"It had a mild 253 in it," Jeff recalls. "That motor was pretty clapped. It was only running on seven and the body had some rust in the rear quarters. I guess you could say it was typical of that model." It wasn’t destined to stay ‘typical’ for long. Young Jeff was busy by day completing a pre-apprenticeship panelbeating course at tech college. At night, he was putting all his hard-won experience and cash into his new project. Jeff’s dad Fred is a mechanic by trade, so getting the small eight back into line wasn’t a problem. Jennings Junior soon had the Prem gutted and the cancer surgery completed.

The philosophy was pretty simple – make it black, and build it different. A ‘Harry’ spoiler was grafted on and glassed over. This produced a very individual style that many mistake for the latter-day Commodore spoiler. A set of wheels just about finished the stage-one package – and Jeff’s student budget. In this guise the car was shown, though without success. 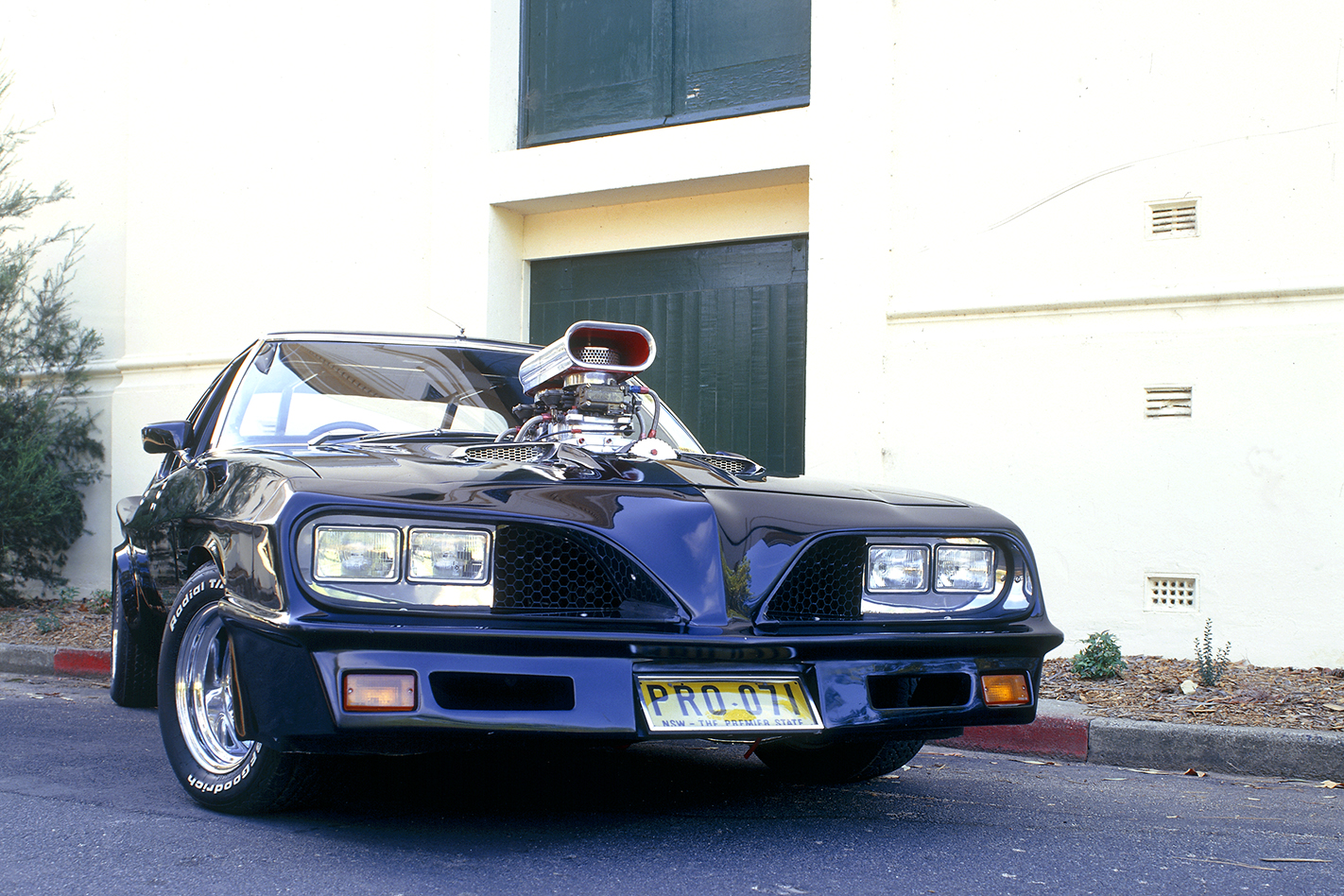 "I was so determined to do well, I drove the car home and, that night, I stripped the front end out. The next day it went to the chromers." That was the start of something big. Jeff had read plenty of magazines and this helped with the direction of his project. A Trans Am Firebird nose was the way to go, he figured. And as he had the Prem de la Prem down to its jocks again, it was an easy job. Or it should have been. Like most bolt-on body pieces, the nose wasn’t a perfect fit, and needed work.

Jeff adapted Sigma bumpers and headlights to create a close-to-Trans-Am appearance, also keeping the cops happy with the positioning of the indicators. The sharp end received a ton of treatment, the rest of the body wasn’t neglected. It was stripped again and painted in – you guessed it – black. The 253 was still there but was on death row. Either age or Jeff’s appetite for horsepower were gonna get it in the end. 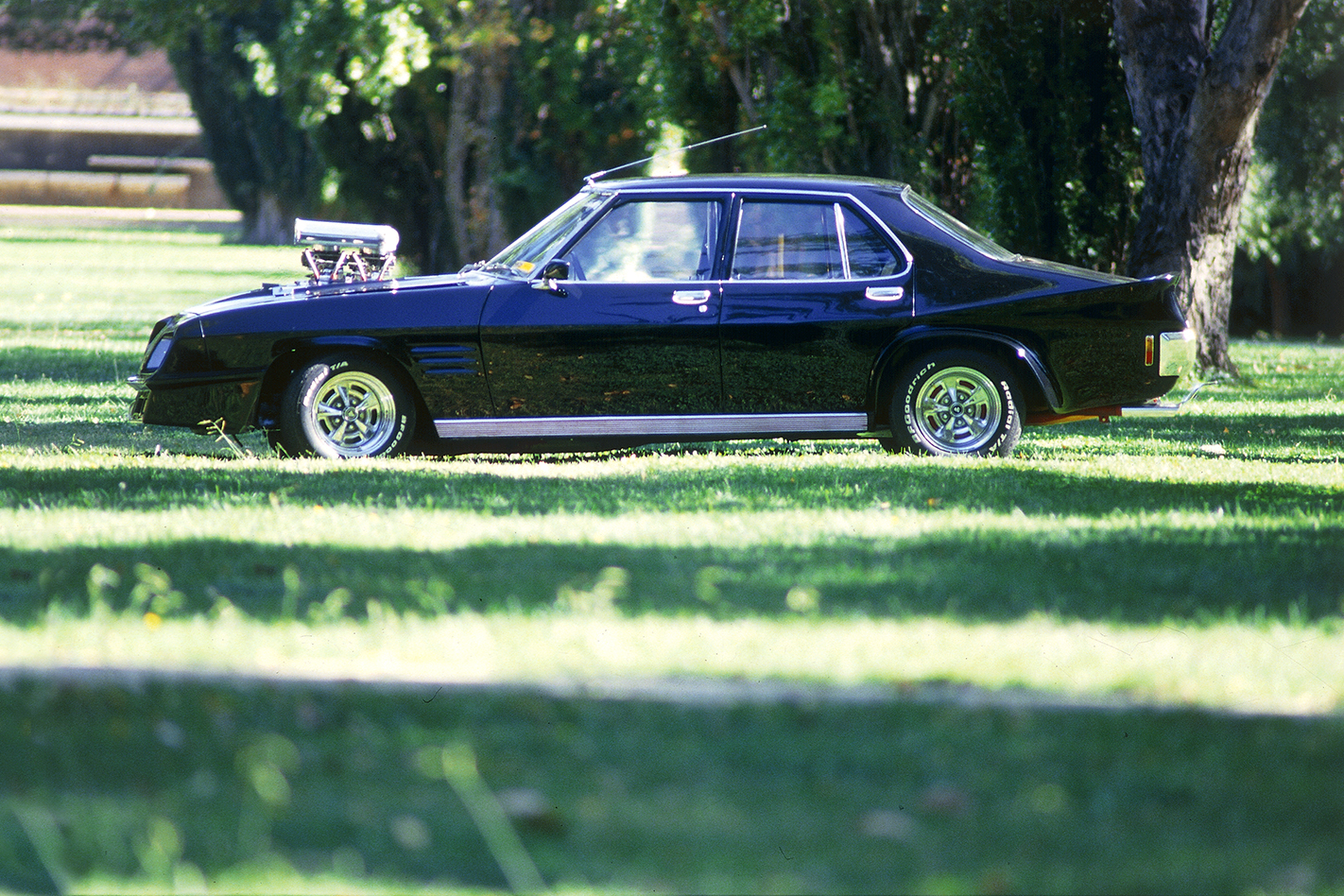 The body was also treated with black paint and given the unique Pontiac nose, XB GT bonnet and flared rear guards

The Prem did service in this revised form for a while, before Jeff caught the bug again. And we all know how bad that can be, don’t we? "The car just wasn’t mean enough," he declares. "I really wanted something different, a car that would turn heads." And he knew how to do it. Forget about fancy body mods and nice paint. Turning heads was a mechanical thing. Onlookers had to be impressed with the go as well as the show. A blower seemed like a good idea … a really good idea.

Jeff had extensive speedway contacts, and these included Ivan Walker. For those who don’t know, Mr Walker is a guru track-engine man – and that means Donovan small-blocks. High horsepower. Mean motors. Jeff originally had an injected engine in mind, but Ivan soon changed that. Why? Well, a high-performance injected engine, reasoned Ivan, had to be driven one of two ways – at idle, or flat out. Not really practical, eh? And a blower was totally useable and reliable.

Jeff reckoned that was a fair thing, so he bought his 350 Chev and dumped it at Walker Racing Engines. There, Ivan began a building, balance and harmony program that would have done Gandhi proud. The block was O-ringed and overbored 60 thou. Into this went forged flat-top pistons and a steel crank. Up top came Walker-special big-chamber heads and twin 600cfm Holleys. Roller rockers, Pacemaker headers, a Mallory ignition system, B&M Star shifter and Turbo 400 tranny rounded out a strong package. 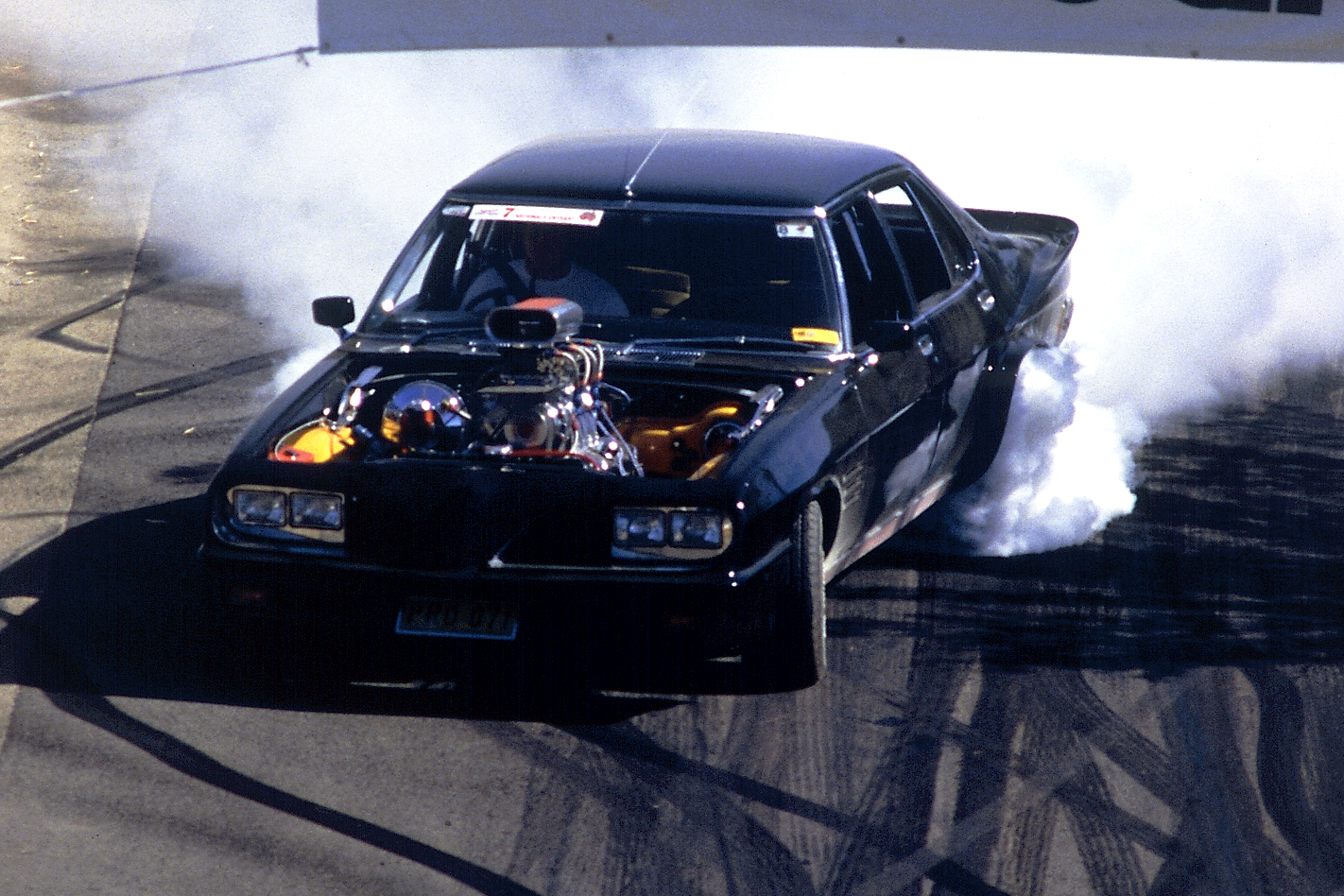 Underneath it ran a Turbo 400 transmission hooked up to a 10-bolt rear end with 3.55 gears.

Hang on a minute, haven’t we forgotten something here? Right – that magnificent Hampton 6/71 blower! Yep, it’s the focal point of this midnight marauder and what a beeeyoot sound it makes! Set up by Russell Jones and bolted to a Hampton manifold and blower drive, this huffer really knocks houses down. When you look at a car like Jeff’s, with its metal mountain range clawing at the sky and making a formerly sedate family car look thoroughly Satanic, you wonder what the fuss is all about. Why don’t they make all cars this way?

To cope with all this power ’n’ passion, Jeff made some sensible engineering decisions. Such as tossing in a Salisbury 10-bolt rear end with 3.55 gears. And gas shocks all round, with Lovells springs and swaybars. Then came polished wheels with GMH centres, 14x8 fronts and 14x10 rears. Tyres are T/As, 245x14 front and 265x14 rear.

Then there were the non-safety, showstopping items. Like a specially fitted XB Ford GT bonnet and flared rear guards. A roll cage comes under the safety heading. Around the driver, Jeff’s done some housework. He’s installed a stainless-steel dash pad and cluster housing Smith’s temp, oil pressure, voltmeter and boost gauges. A Pioneer stereo cassette player barks through Voxon speakers. And towards the end of this build-up, Jeff added a custom-made radiator, even more extensive chrome plating, and twin fuel pumps. 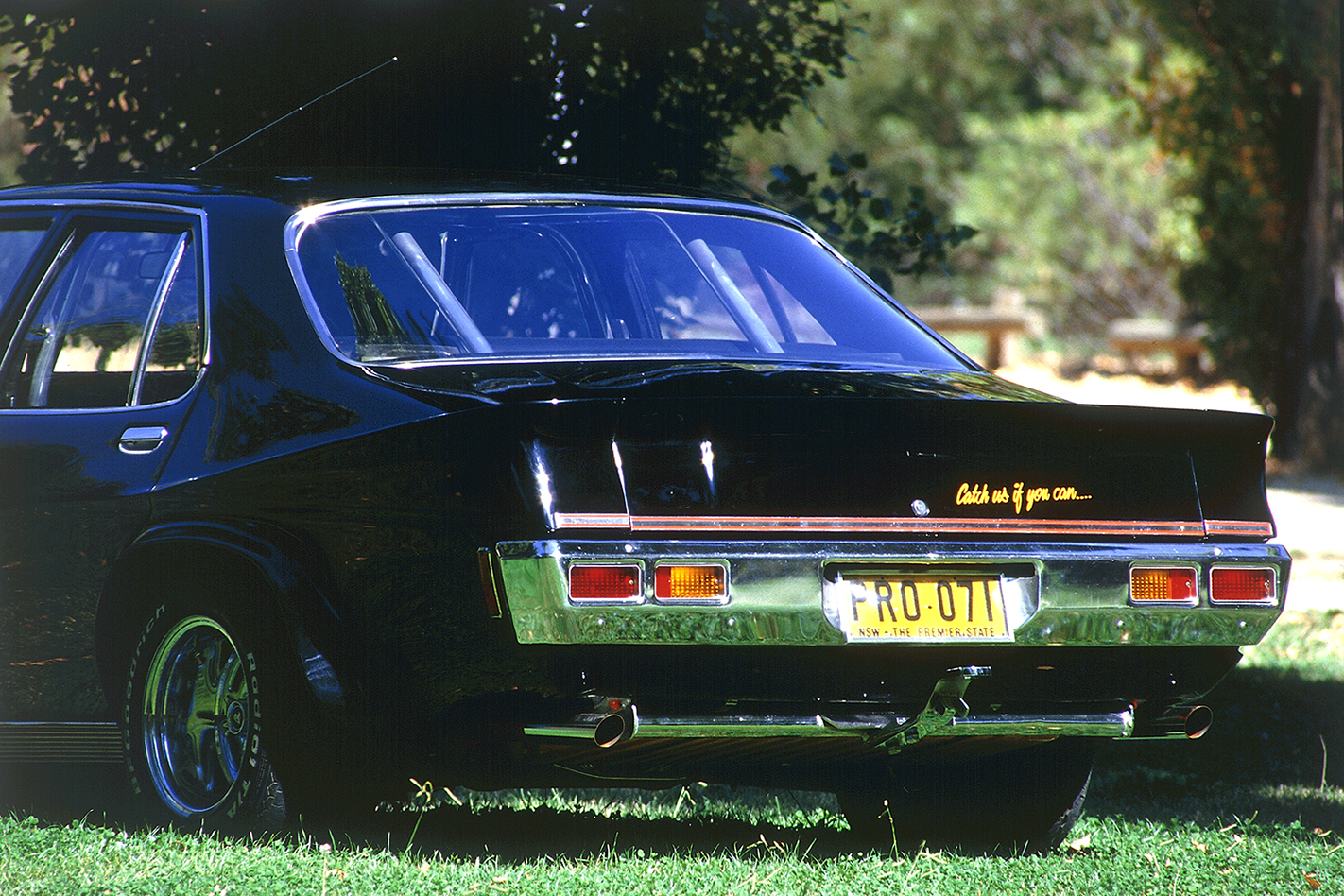 It was all about the chrome back then and Black Out had plenty of it. There was also a full roll cage inside

A couple of those mods were installed the hard way. Jeff’s engine was running very hot, starving itself of fuel. After the fuel problem was fixed, the radiator (and settling on the correct fuel – BP Super 100 Octane) helped cure the other woes – until that fateful day. Jeff was quietly driving down to the shops, when there was an expensive rattle from beneath the Ford bonnet. The 350 had tossed a leg outa bed.

Back to Ivan Walker he went. And with him a new block, plus a head, some pistons and the blower Jeff salvaged from the old motor. Mr Walker stuck another powerhouse together – the one you see on these pages, to be precise. Now everything’s juz fine and dandy. The way a blown black Premier oughta be.

But this wonderful romance will soon come to an end. Jeff’s found another love – and she won’t cop being left in the garage all night, every night. Yes, Jeff’s about to get hitched and by then he wants to see a return on his $35,000 investment [remember, this is 1987, folks]. But it’ll be a sad parting. All the people round Jeff’s area – including the cops – have grown accustomed to his creation. And he’s pretty attached to the ol’ girl too. But there’s a glint in his eye that suggests there’s a will and a way. So perhaps this big black Prem will stay right where it is. 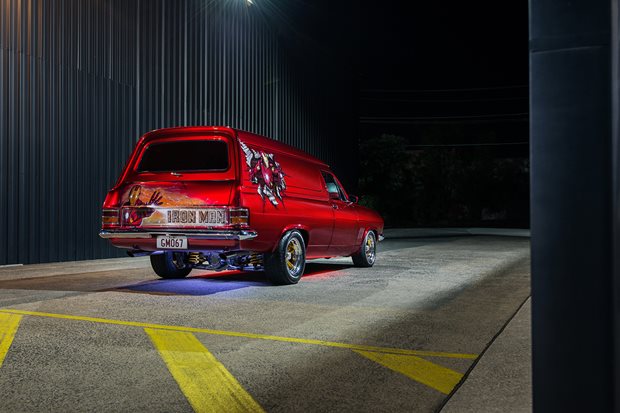 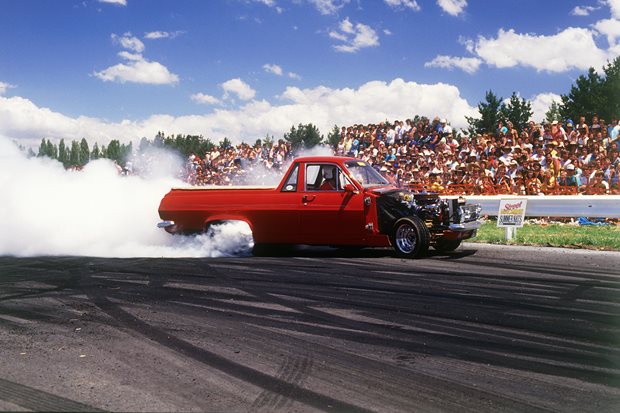 Graham Cowley’s HR ute is a genuine street machine survivor. Built over 30 years ago, it retains its signature features including the paint and the original screaming... 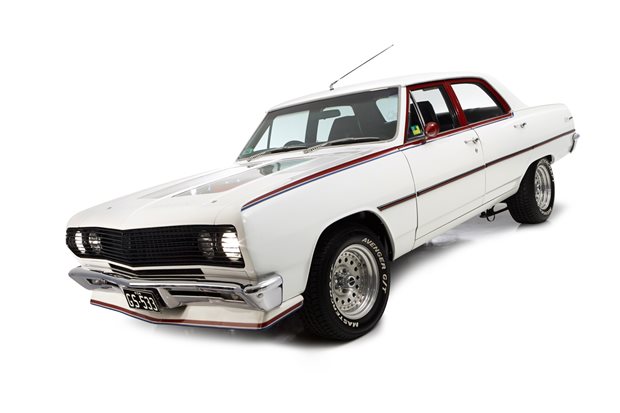