THE humble Holden six-pot would have to be one of Australia’s most widely modified engines. Thanks to a production life that spanned almost four decades, they are nothing if not plentiful – and eminently tuneable. Sydney supercharger specialist Jeff Ramsay has over 30 years’ experience fettling Holden sixes, so when he and son Matt decided to embark on a personal project, it was always going to be something special. Enter this wild Duggan-headed, Whipple-blown, mechanically injected 186 Holden red motor, set to produce upwards of 650 thundering horsepower and send the Ramsays’ FJ drag ute down the standing quarter in no time flat. “The engine was fully built and engineered in-house at Jeff Ramsay Engineering, using only the best componentry,” Matt explains. “Hundreds of hours were spent measuring, checking and machining parts, and most external parts were custom-made to suit this particular set-up.” 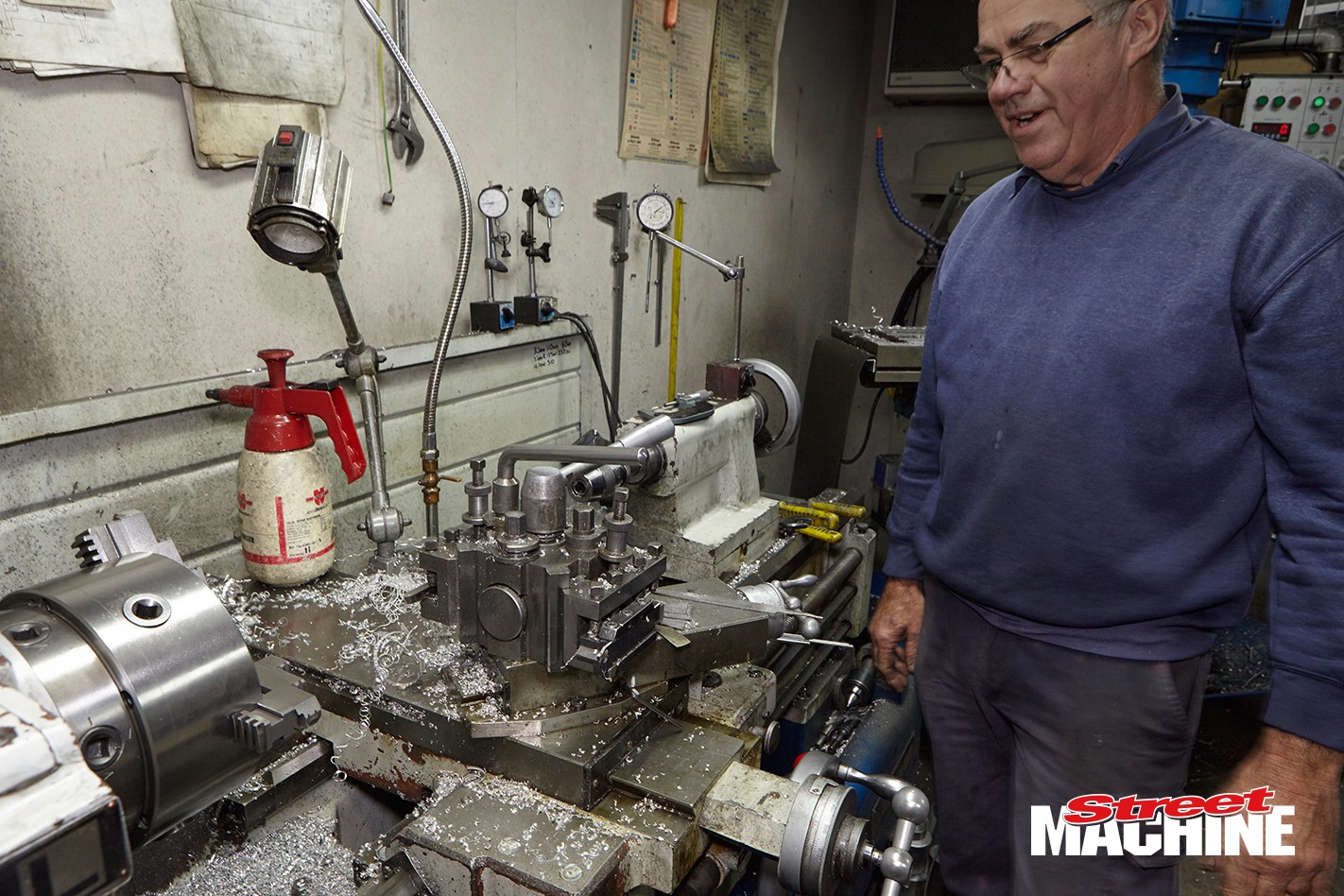 From its towering carbonfibre injector hat to its heavily modified oil pan, the engine is laden with exotica. But for all the custom billet hardware, it is still very much an old red motor. The block was subjected to the regular checks and measures, but aside from being part-grout-filled, O-ringed and studded top and bottom to keep its internals, well, internal, there is nothing particularly exotic about it. Likewise, the crankshaft was balanced and nitrided, but is still the ridgey-didge factory-issue Holden item. “We’ve used proper race bearings and a stud girdle with 7/16-inch ARP mains studs, so we’ve done our best to get it to stay together,” Matt says. 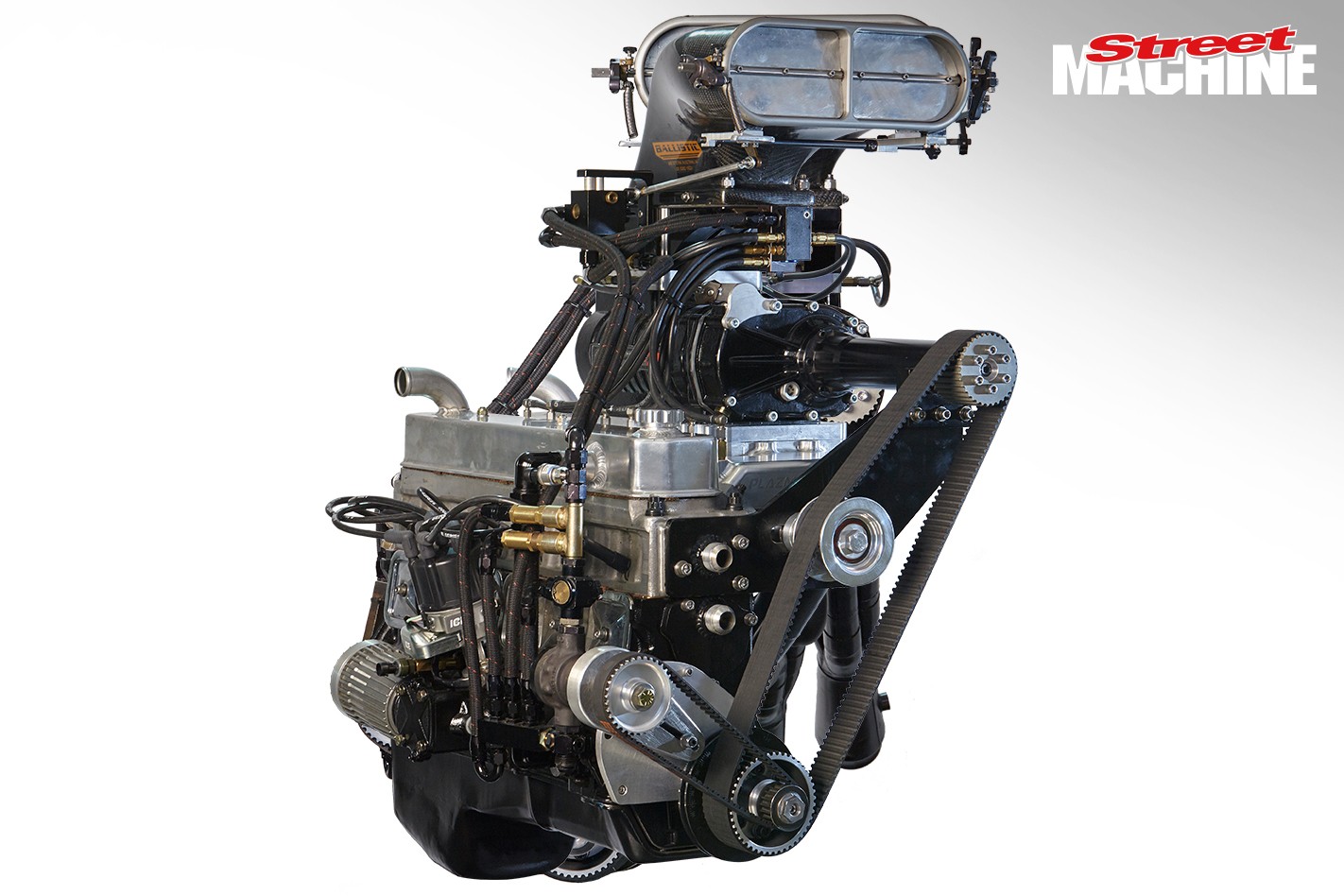 With 30psi of boost planned, the standard rods and pistons had to go, but there isn’t exactly a vast array of aftermarket options available for 650hp meth-chugging 186 Holdens. To that end, Jeff spoke to Carrillo in the States about putting together a package that would do the trick, and they supplied a set of billet rods and CP pistons, custom-made to suit this unique application. 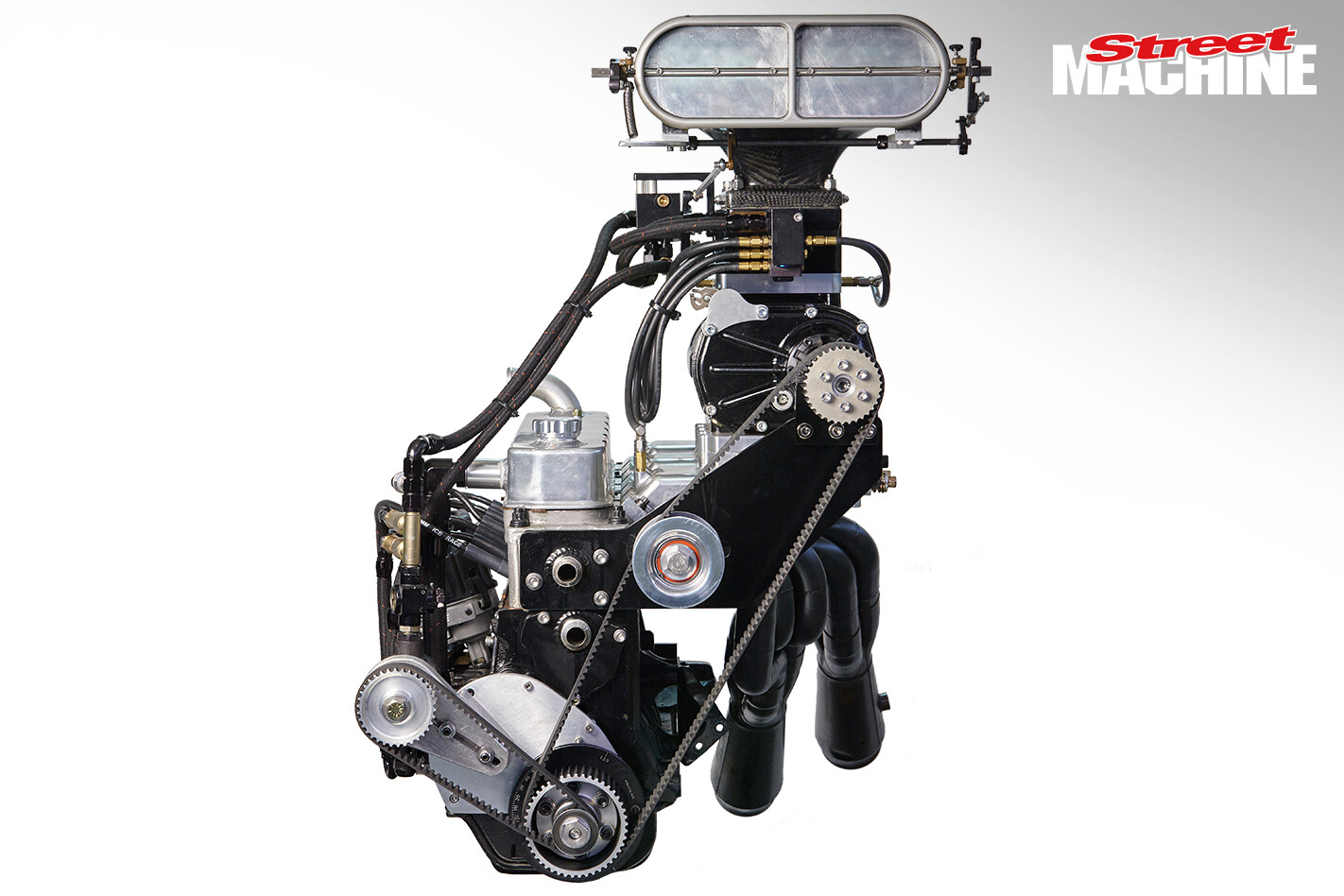 Any Holden six nut will tell you that the Duggan head is a revered piece of Aussie hot-up hardware, and the Ramsays’ testing certainly seemed to support its reputation. “We flow-tested the Duggan against a really good 12-port head, and its flow characteristics were vastly superior. From 3000-7000rpm the two lines on the graph just grew exponentially apart,” Matt says. “The ports come out at 45 degrees to the valves rather than 90, and the valve spacing allows for the fitment of larger valves. The Duggan is alloy too, so it’s a fair bit lighter.” 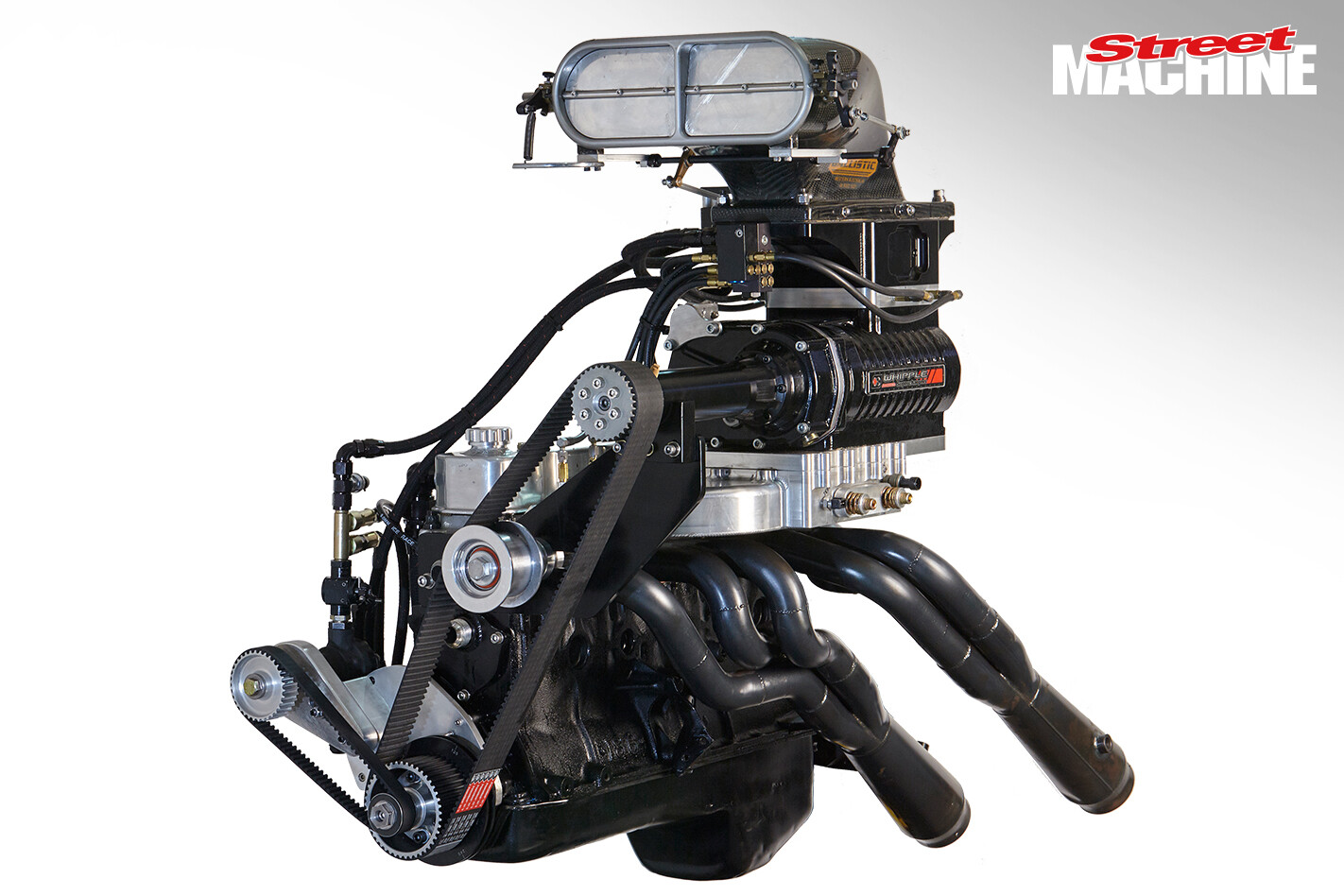 The head is anchored down with half-inch head studs, while a copper head gasket and custom bronze fire-rings are tasked with keeping the combustion charge confined. “A lot of turbo four-cylinder guys are using them with up to 80psi of boost, so they should work well,” Matt says. The cam is a Surecam solid-roller, which, like so many other components, was designed especially for this application. Jeff isn’t keen to go into great detail regarding the specifics of the grind, but he does suggest that it has 260° duration at .050in, and around .700in lift.  So in other words, it’s a whopper. “I took the cylinder head to Kim Baker and he flowed it and tickled it a little bit,” Jeff says. “It didn’t flow as well on the exhaust, so when we went to the cam grinder, he gave us more duration on the exhaust lobes to make up for the inadequate exhaust port.” One of the highlights of the whole package is the completely bespoke billet blower manifold, which was sketched up by Jeff before Matt spent some 20 hours in CAD drawing, toolpathing and CNC machining. The plenum and runners are all one piece, with a baseplate welded on the bottom, which makes for a fairly spectacular-looking piece of hardware. It wears a Whipple 3.3-litre screw blower, as opposed to the more commonly used Roots-type pump. “They are heaps more efficient than a 71-series supercharger; they don’t take as much power to drive them,” Matt says. “I like the look of the Whipple and you don’t see many of them out there, so it’s something a little bit different.” Just as different is the rather mean-looking Ballistic carbonfibre injector hat, fed a steady stream of methanol by an Enderle 80A belt-driven pump. The ignition system is an all-Aussie affair built with off-the-shelf bits from ICE Ignition, but is fairly straightforward, with a coil, dizzy and 16V booster. Those beautiful custom-made headers boast 17/8-inch primaries into three-into-one collectors and three-inch to four-inch megaphones. Suffice to say, you’ll hear it coming.

With the blower 25 per cent overdriven and producing 24psi, the motor produced 492hp and 512ft-lb by 5000rpm during a preliminary dyno session. A pulley change now has the blower running 32 per cent overdriven, so with more boost and plenty more revs to go, Jeff is confident of a solid result once it’s fully tuned. The engine now resides in Jeff and Matt’s FJ drag ute. The humpy has a fair bit of race heritage about it. It was initially built and raced as ‘The Brumby’ in the 70s by Ray Walker, and Jeff remembers the car running at Castlereagh back in the day. It runs a standard body and chassis with an HR front end, full ’cage, Powerglide and 9in rear, with plans to cram either a 29 or 30in tyre under it. “I’d like for it to run an eight eventually, but off the trailer it should go mid-to-high nines according to the Moroso,” Matt says. “We’ll run it in Super Sedan and at nostalgia events.” He expects to be on the track in two or three months, it’s recently been off getting tubbed and painted and now the guys are putting in the final slog to get it finished.

If you wandered in off the street and wanted Jeff and Matt to build you Holden six just like this, what would it cost? “Well, I don’t know,” Matt says. “It’d have to be at least twenty grand. There’s so much time involved that you couldn’t charge a customer for every minute we spent on it. There were plenty of hours just in the calculations before we even got started!”

Jeff stresses the importance of doing things the right way when embarking on such a project. “You’ve got to be sensible and talk to the right people; you need good information,” he advises. “And if you buy good-quality components in the first place that’s a real plus – that way you only have to do it once.”