Dr Tim takes us back to South Australia in the early 1960s, when modified car culture was truly a world of pure imagination

THE soaring vocals of a Petula Clark song ring out from the back shed of my parents’ house in Almond Grove, Brighton, South Australia. Peter Bartrop is at work on the FX Holden project again.

The shed is made of galvanised corrugated iron stretched over an angle-iron frame with round bar tensioners. In summer it’s hot as hell, so the double swing doors are open and the sound from the transistor radio is amplified by the giant tin box. Not that the shed is so big; in fact it’s only large enough for a car and some work benches down one side. So work is usually conducted with the car poking out the doors into the ‘right-of-way’. At some time in history, when the area was just an almond orchard, my father had formed a rear access to our property and the local council must have let him retain that right. This formed the narrow right-of-way between our neighbours’ blocks, which also created a work area and a place for people to meet and talk cars. 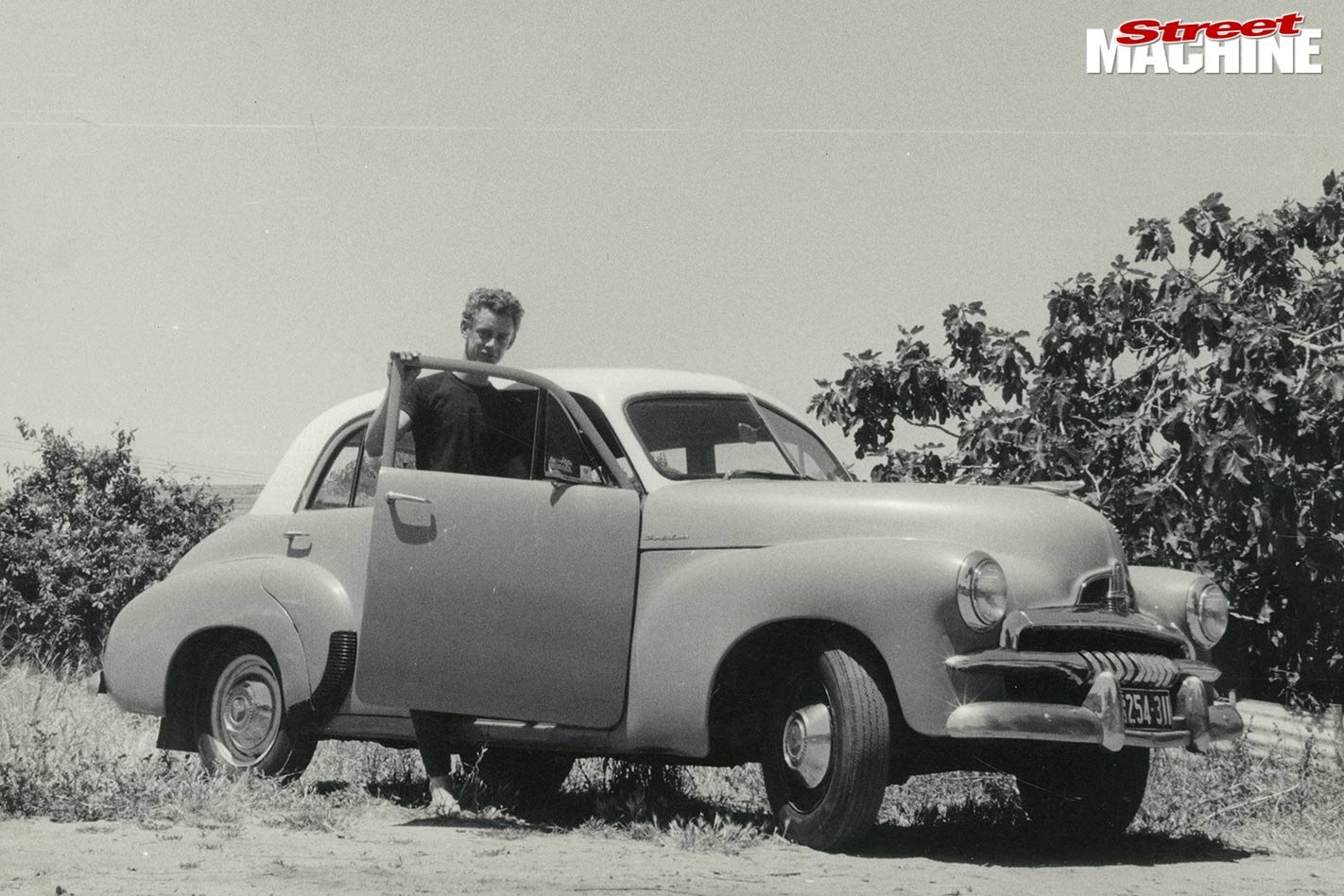 All of Tim’s brothers started with FX/FJ Holdens. This is his second-oldest brother Allan with his first car

From the pit that he and his mates had dug and brick-lined, Peter calls out: “Hand me a 9/16 ring, Tim. That’s an open-ender. Thanks matey.” It’s 1963, and this is my introduction to working on cars.

From 1963 to 1965, my eldest brother, Peter, worked on an FX Holden humpy, taking it from standard to an amazing custom car. He was in his late teens at the time, and completely self-taught, learning mostly from American hot rod and custom car magazines. There were no equivalent Aussie publications then, with only Wheels and Modern Motor dealing with the new-car scene. Peter had no trade training and worked in an office role in SA Railways during the week. 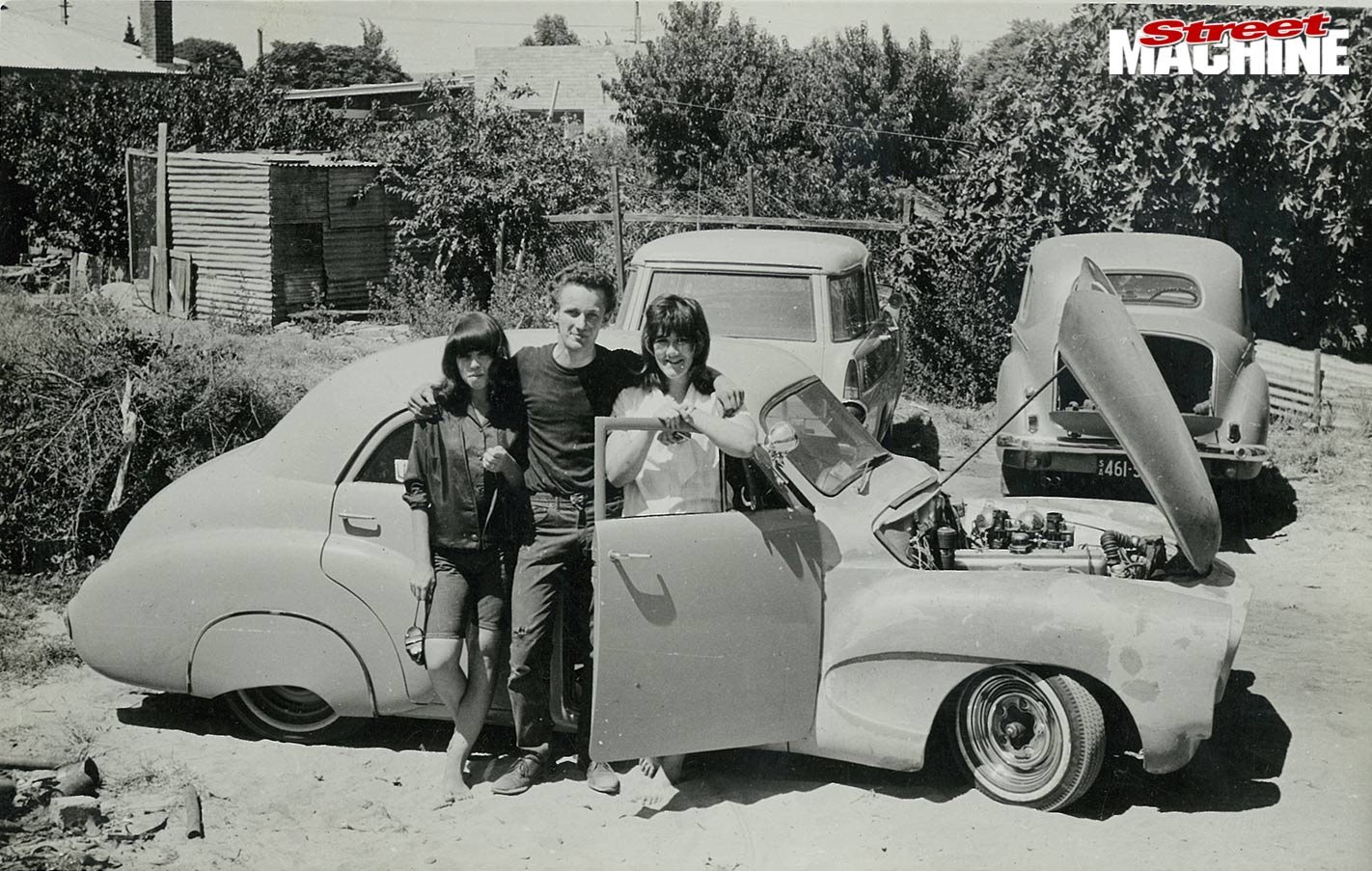 Peter drove the humpy while it was still a work-in-progress; he tackled the quad headlights first while the remainder was still stock. Next came the top chop, which was done at a mate’s place where there was more room. I think it was a two-inch chop.

Over the following year-and-a-half, the transformation gradually took place. The car was lowered, custom rear wheel spats were made and fitted, Corvette-inspired scallops were added to the front guards, the aerial was frenched, and the bonnet was sectioned in a taper towards the front and hinged from the front corner. A large but stylish front grille ‘nostril’ was created, and chromies with narrow whites were fitted. The body was painted a nice sky blue up to the firewall. 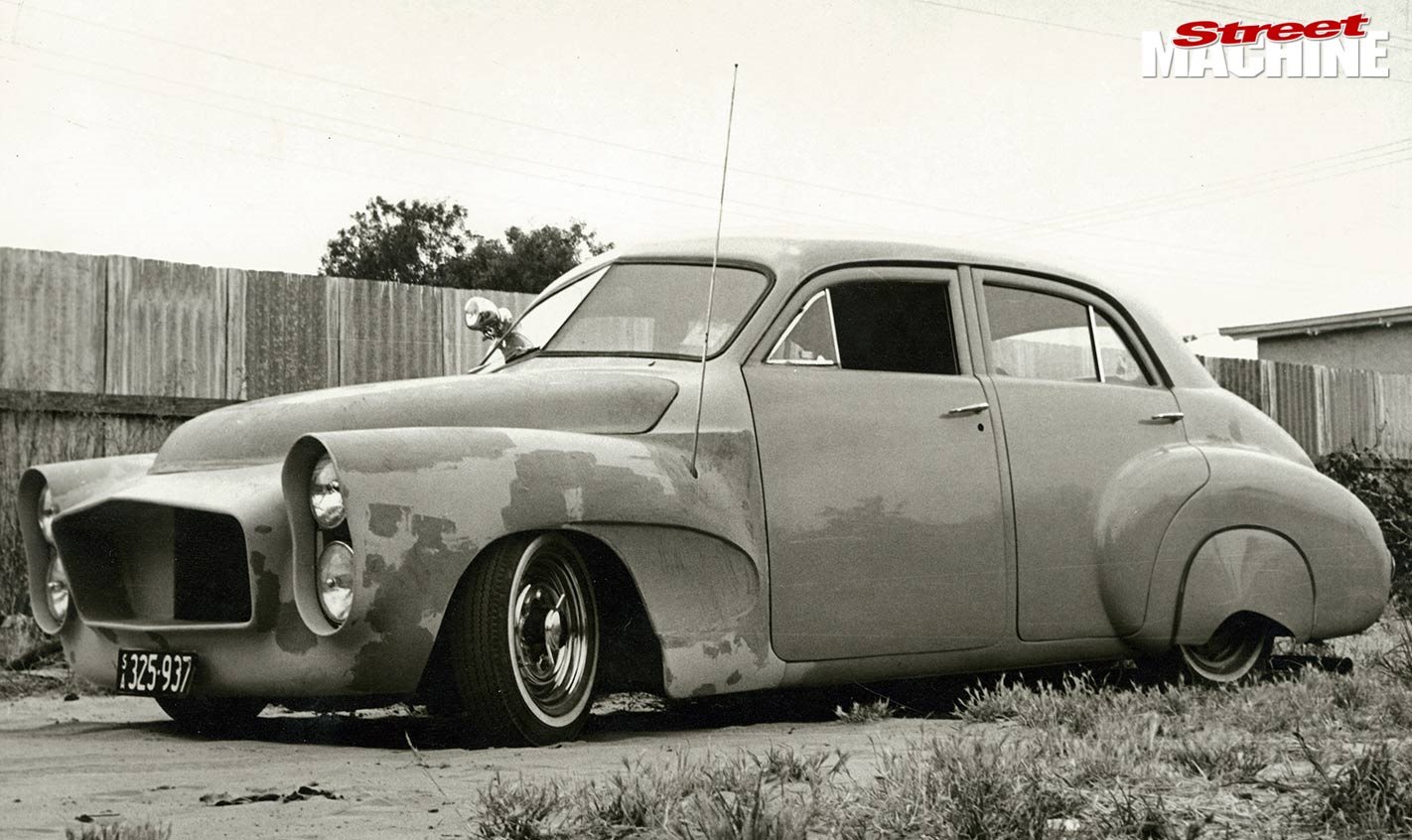 The front section was never completed or painted, but the car had terrific style and looked mean on the road. Peter had fitted an adjustable searchlight to the driver’s door, which added to the humpy’s tough appearance and was typical of US cars at the time.

The amazing thing is that Peter did most of the work himself, with what we would regard today as a very basic set of tools. All the welding was done using oxy/acetylene, which he had learnt somewhere. He hammer-welded the panelwork and also did lead wiping, as well as using body filler in later stages. He formed metal over wooden moulds and shapes. He painted the car in that little shed with an old compressor that was later handed down to me. There was no TIG or MIG back then, or small brake presses for folding little parts. Everything was improvised using skill and intuition. 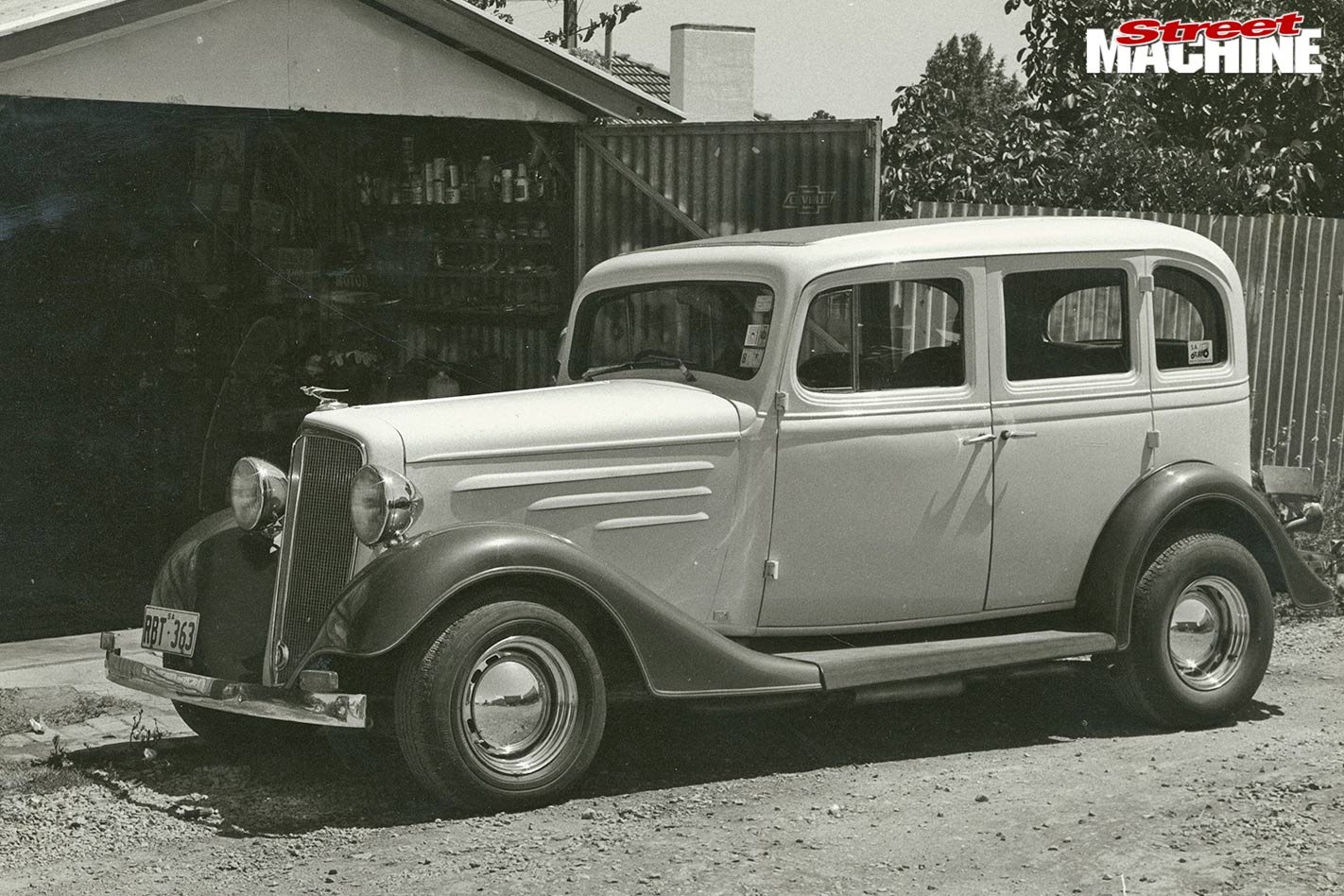 Tim’s first project car, a ’34 Chev sedan, rolled out of the garage in 1978. The shed and right-of-way can be seen in the background

Peter was not strong mechanically, so the car’s innards were basically stock, with cut coils and lowering blocks on stock suspension and brakes. The original grey motor side-plater benefitted from a pair of twin carbies, probably fitted and tuned by my second-oldest brother, Allan, who was doing his apprenticeship as a motor mechanic during the later stages of the project.

The back shed was a terrific place for me to hang out as a young kid. Peter was always messing around and creating fun. His mates came over often to hang out and talk cars and look at magazines. They came in English, American and Aussie cars – Austin A40s, DeSotos, Vanguards and myriad Holdens. I had three older brothers and they all started with FX/FJ Holdens. When it came my turn years later, I started with an EH Holden – a modern car by their standards! 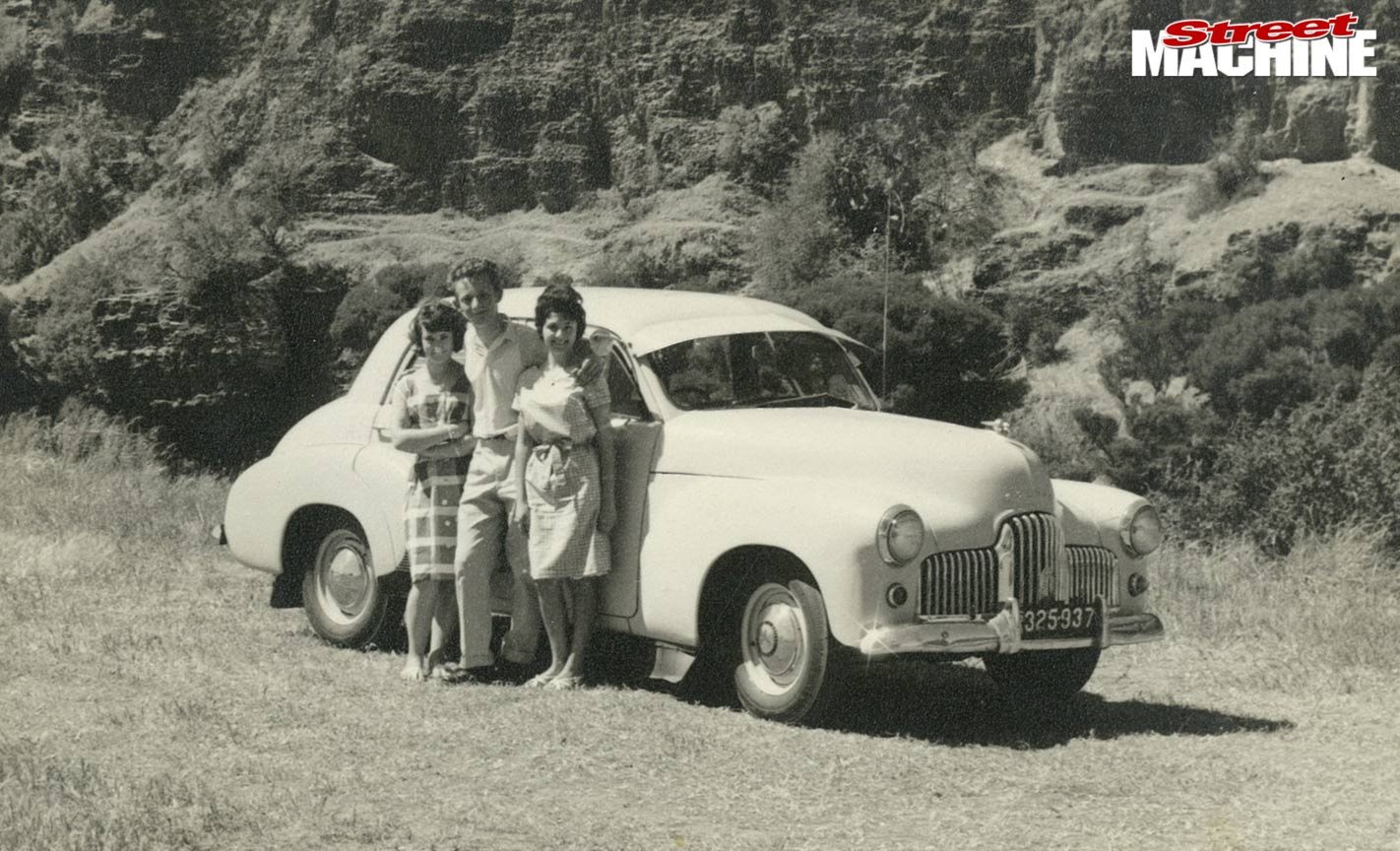 This is the original FX that Peter started with, complete with sun visor, mudflaps, and mandatory girls

Girls visited out the back as well to hang out with the boys, so it was a fun place to be. Sometimes the girls would wet my hair under the tap and make an Elvis-style hairdo to amuse themselves. I didn’t mind the attention. Mum fitted us little ones out in strong khaki shorts and Peter would often say that our skinny legs could take two steps before our shorts even moved. The Beatles were just becoming a force in music, so they were playing a lot on the shed radio, together with The Seekers, Johnny O’Keefe and The Masters Apprentices. Somehow work still got done. 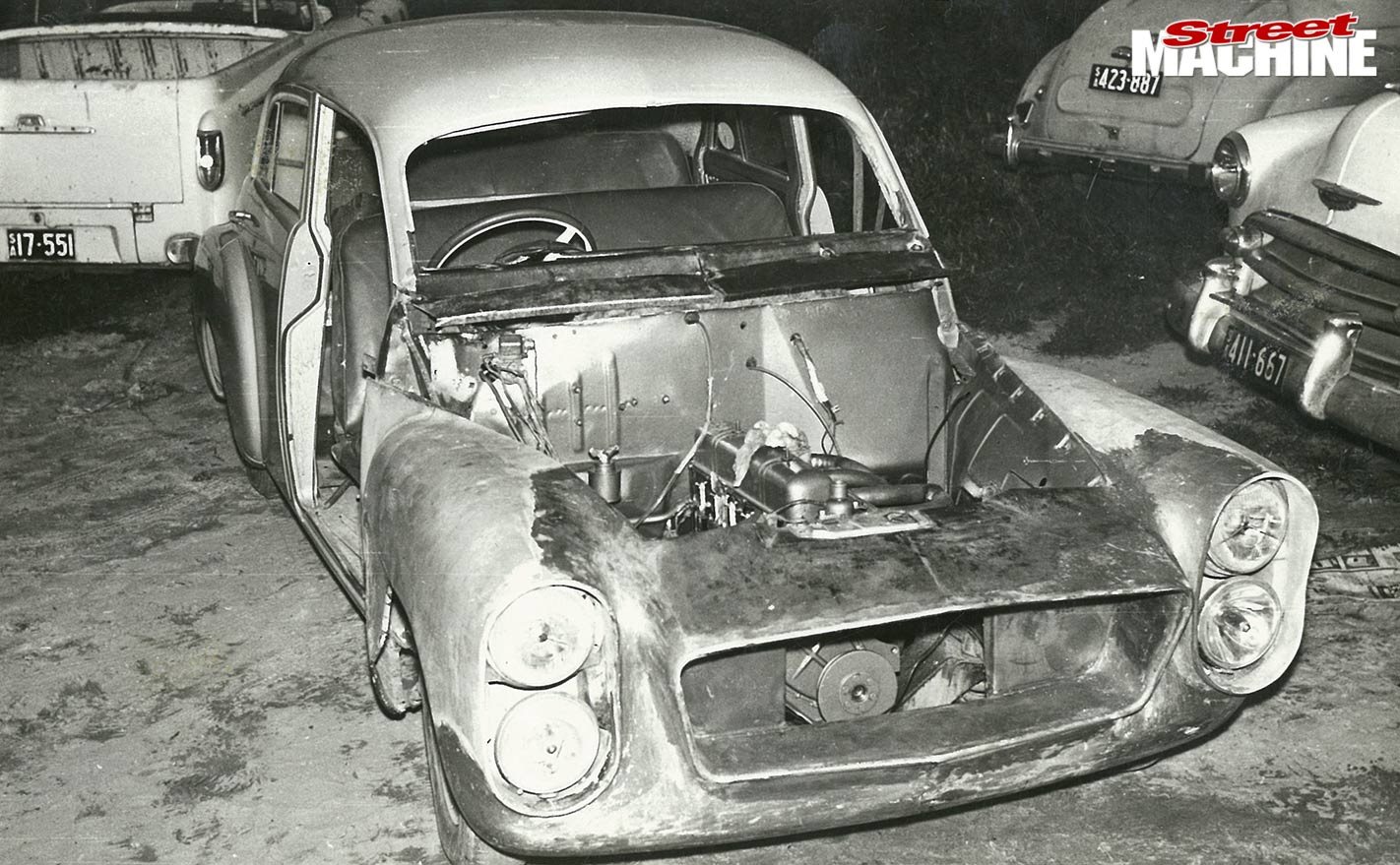 There was no internet then; our family didn’t even have the phone connected until much later. So communication about cars was limited to Peter’s mates discussing ideas, reading US magazines and taking note of what they could actually see in the local area. That’s part of what makes the car the miracle that it is; it came from original thoughts and ideas.

We lived near the beach, and I remember riding my bike down at Jetty Road and spotting this amazing coupe built from an FX Holden. It was known as ‘Alian’, because it had an AP5 Valiant grille with the ‘V’ and ‘T’ in the Valiant emblem cut off to fit the narrower opening. 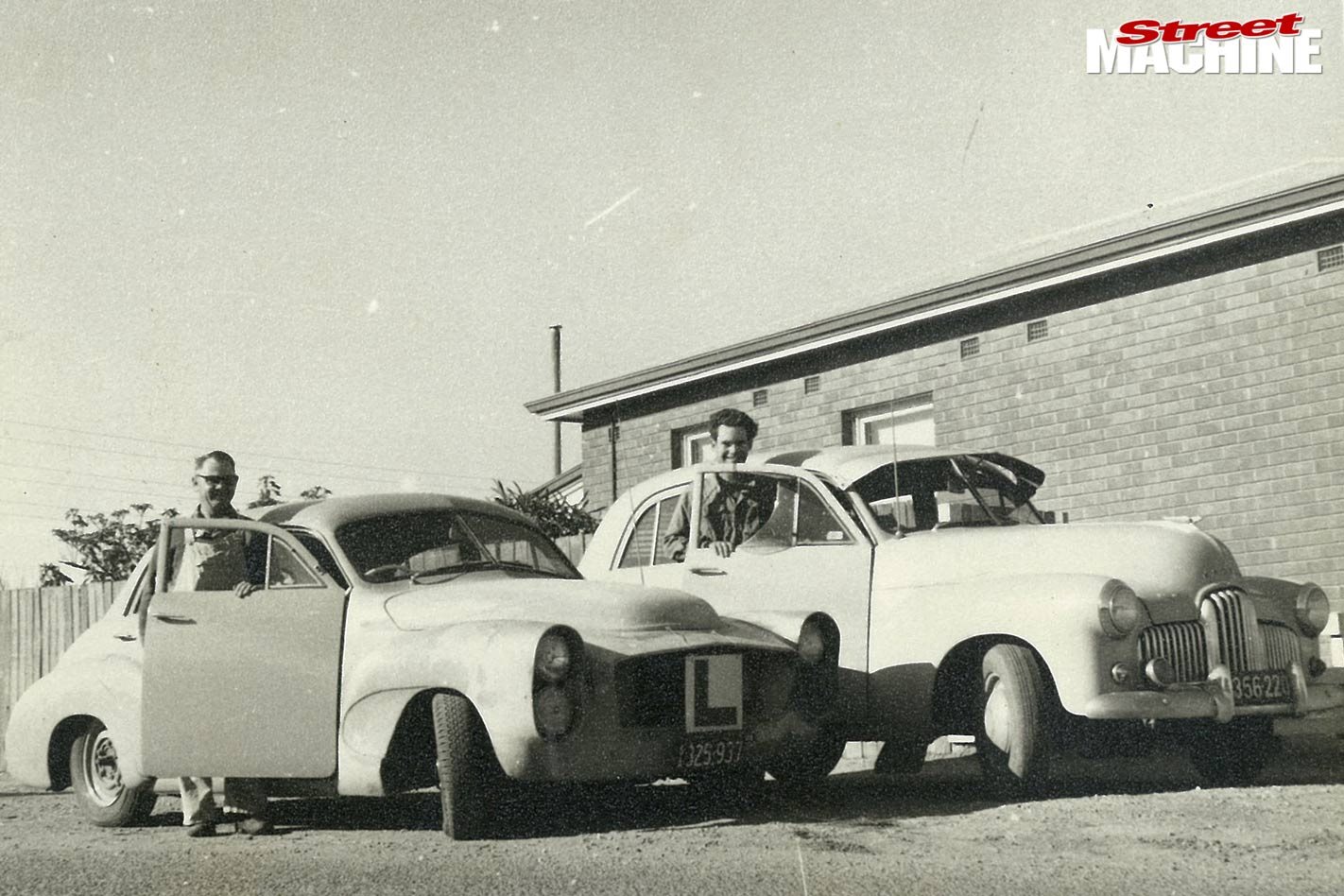 As I was looking at the car, Peter drove up with my sister Janette. Sometimes, when he was without a girlfriend, Peter took Jan with him so he still looked cool. She was old enough to look the part. Anyway, Peter knew the owner, who said he had been inspired by my brother’s car, which had become a local legend by that time. A number of coupe-style cars were built, the best-known being Bobcat, created by fellow Adelaide resident Bob Moule. 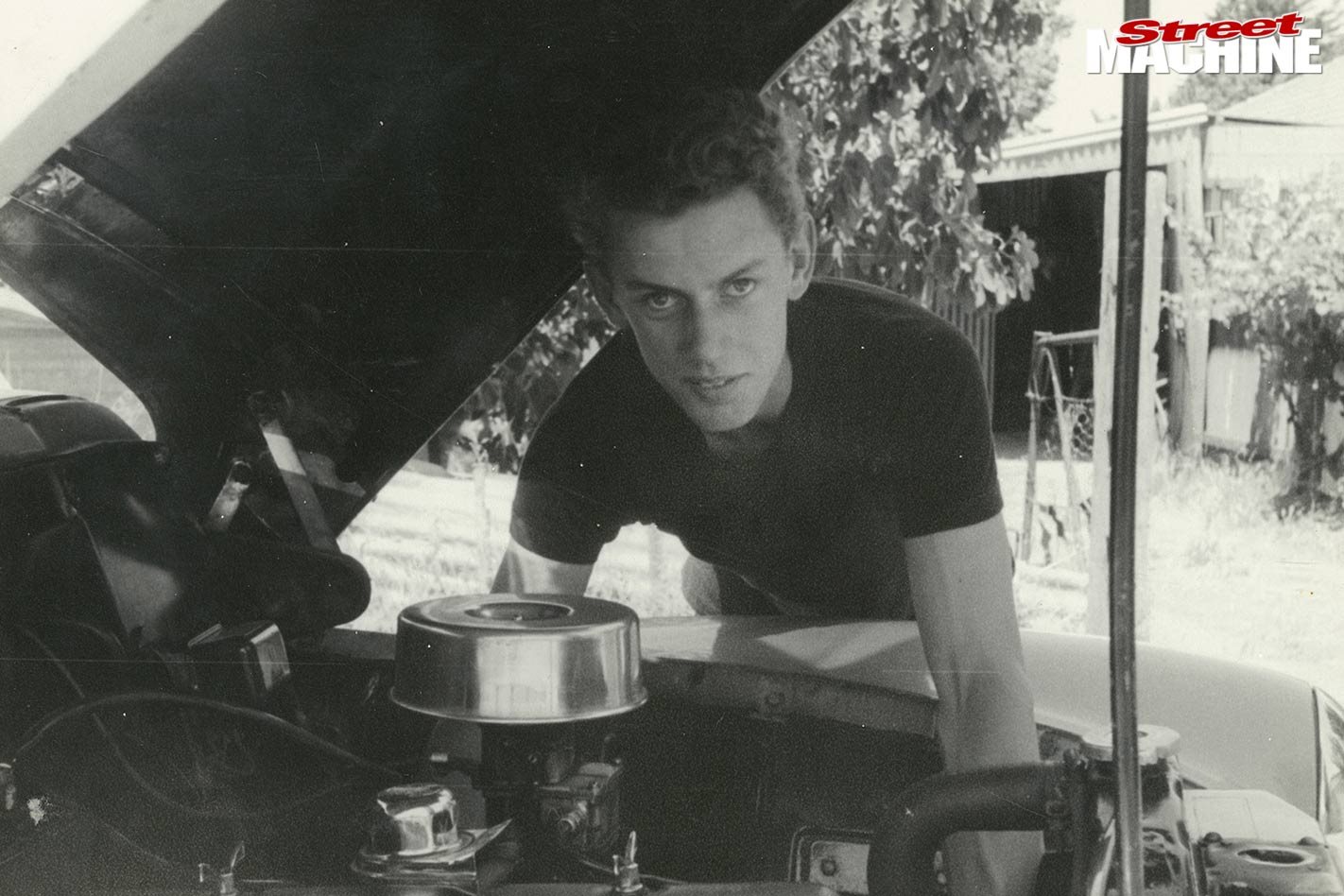 Sometime later, Peter had a crash in the car when he fell asleep at the wheel on a trip to Quorn in the north of SA. The damage wasn’t that bad, but the car was sold after that and our family lost contact with where it was and what happened to it. Peter moved on to married life, and while he maintained an interest in cars, he did not start any other projects. He died in February this year, and I posted some of the photos that I found in his files on Facebook. They got an amazing response, which I didn’t expect because I had grown up with the car. 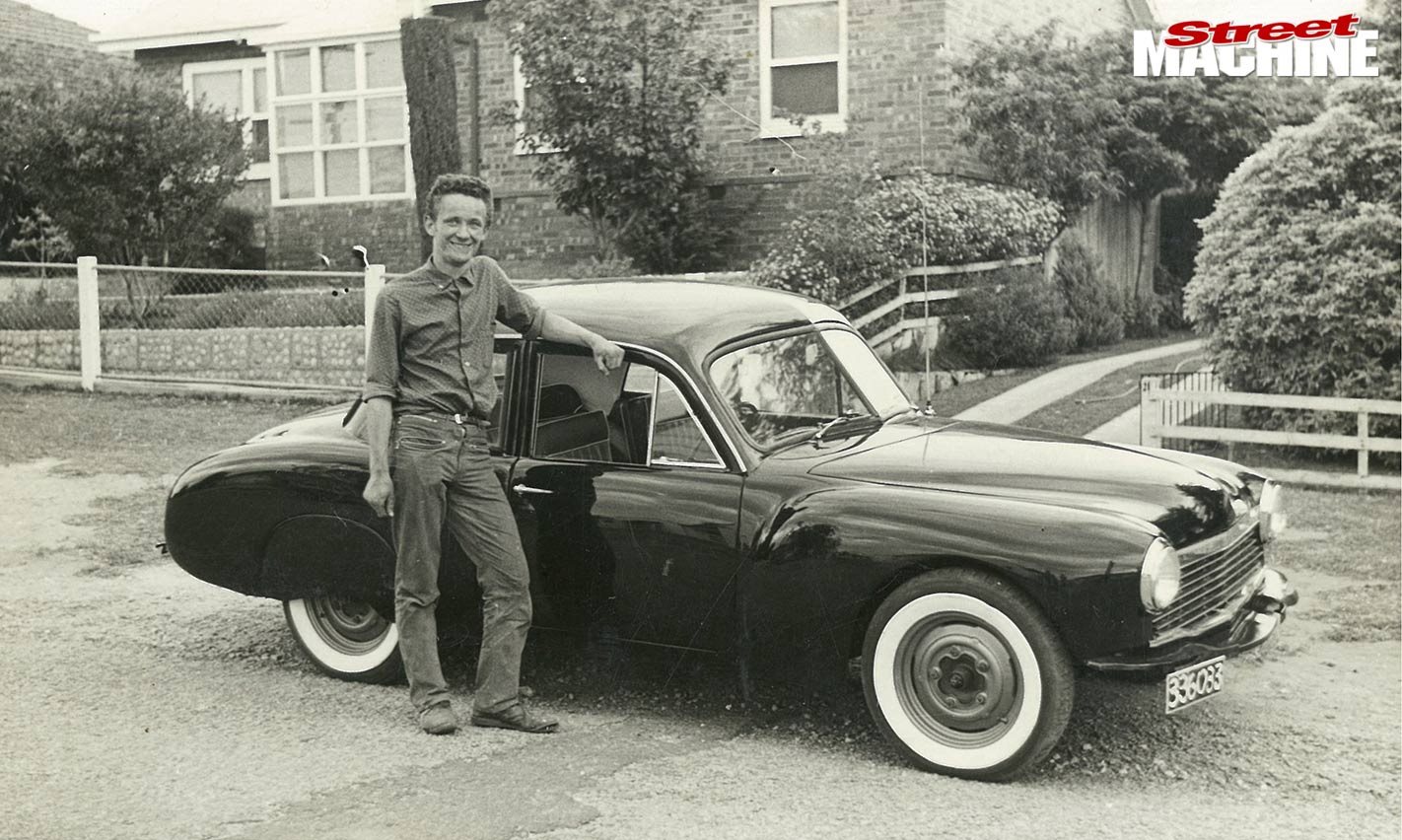 The famous ‘Alian’ coupe with its owner

Peter sparked something in me, leading to an interest in modifying cars that has lasted my whole life and turned into a career in mechanical engineering.

And so it was that in 1978 another car emerged from the little shed at Almond Grove: my 1934 Chev hot rod. Peter would advise me on it whenever he was visiting home, and he was happy with it. My sister was my first passenger on that memorable test drive; she had to sit in the back seat, as I had only fitted the driver’s bucket seat in my hurry!