IT MAY have been subliminal, but many of us were learning the importance of a decent power-to-weight ratio before we even started school. Yep, thank you Hot Wheels. I still collect the bastards, but my first Hot Wheels car back in the 70s was a green weapon called Poison Pinto. It was based on Ford’s US small-car Pinto range, but stuffed full of blown V8 power – I’ll guess it as a big-block Chev to annoy the brand purists. That was followed up with a red Matchbox Mini sporting a radial aircraft donk and dubbed Mini Ha-Ha. 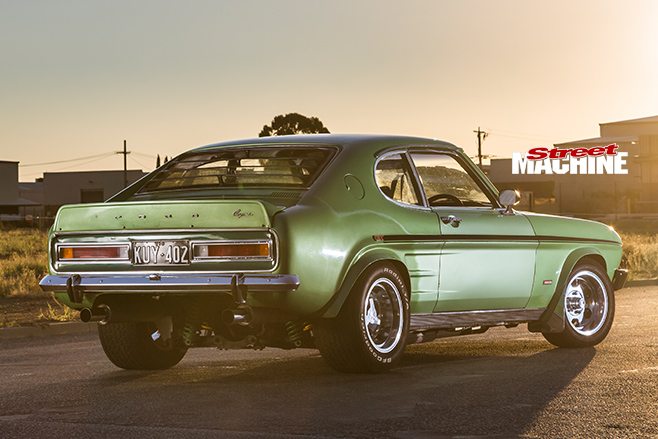 P6 LTD tail-lamps were more commonly swapped into HQ rear bumpers, but work a treat on Neville’s Capri along with the LJ Torana rear spoiler

Sure, there was some artistic licence used to jam such huge engines and a set of fats under those tiny bodyshells, but while I was busy performing outrageous stunts with my toy versions – or squashing them in a vice – Neville Simkin was giving the Hot Wheels treatment to the real thing. 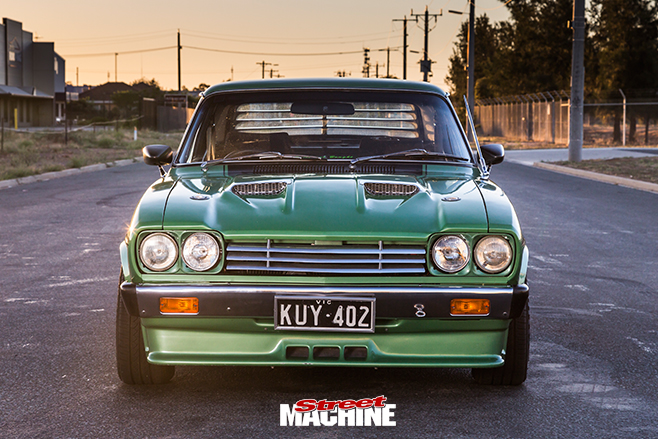 Body mods were all the rage when Neville kicked off this Capri build, and a wayward drunk driver was just the catalyst he needed to let his imagination loose. The beautiful result is a mix of Celica, Sigma and RS3100 Capri parts, highlighted by a custom grille and flared guards

“I bought this Capri in 1977 when I was just 17,” Neville remembers. “I was an apprentice mechanic at a Holden dealership in Numurkah, just north of Shepparton, and bought it off a work colleague.” 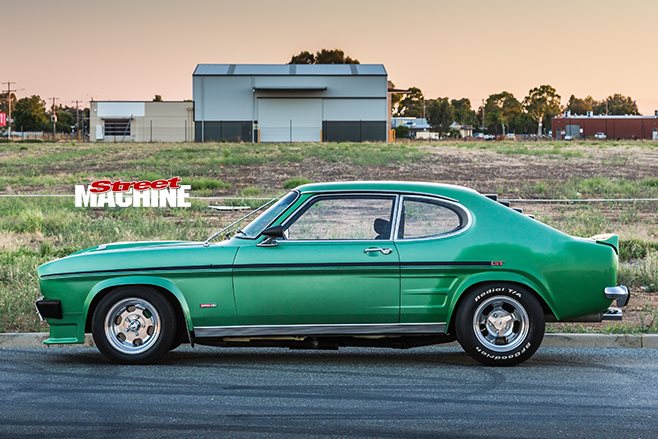 For $2300, Neville scored a factory GT 3000 Super Roo, and it wasn’t long before he started with his first round of mods. The V6 was hotted up with a big cam, worked heads and twin 45mm Webers, while sidepipes made best use of the V engine configuration – and were just plain era-cool. 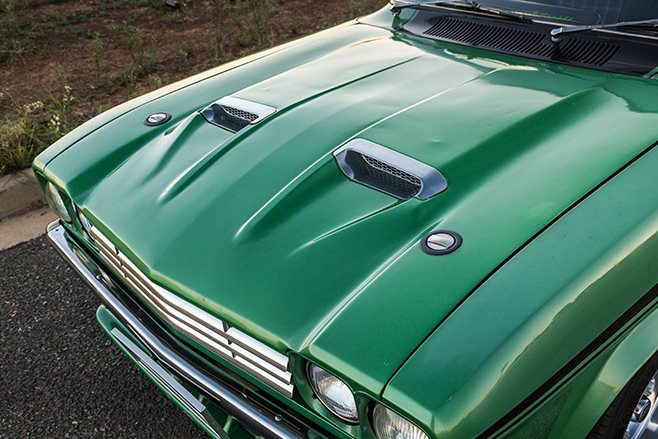 The XB bonnet skin was chosen for both form and function, adding to the car’s individuality but also necessary to allow clearance for the draw-through carb set-up

A drunk driver damaged the front end on a trip home from the Heathcote drags, so Neville took the opportunity to personalise the Capri’s look, modifying a Celica front spoiler to fit and adding a custom grille, Sigma front bumper and racier RS3100 Capri twin headlights. An ever-popular L88 Corvette bonnet scoop was fitted, and an LJ Torana rear spoiler and LTD tail-lights were added for some rear-end bling. Benalla Road Panels was entrusted to fabricate some cool flared guards, necessary to house a fat set of Dragway four-spokes. 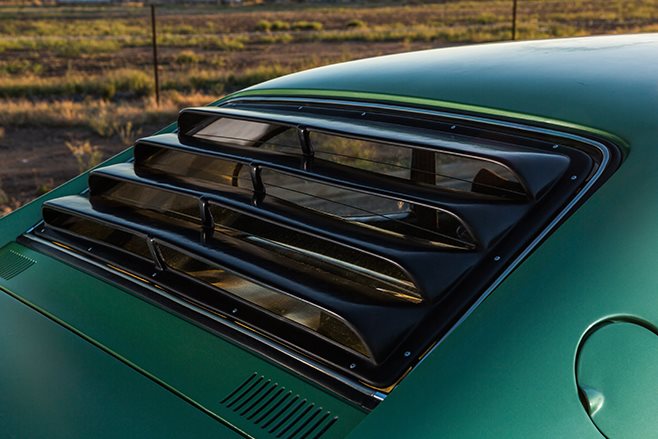 That was the go for a couple of years, before Neville upped the ante with a 302 Windsor pirated from an XY Falcon, which he backed with a C6 trans. Ever the optimist, Neville retained the standard Capri diff, but knew its days were numbered.

In the early 1980s Neville was working as a mechanic with his brother, Trevor, who was specialising in fitting Garrett turbo kits. “I had the idea to throw a couple of hairdryers on it,” Neville says, “so I started planning out the build and sourced the necessary parts.” 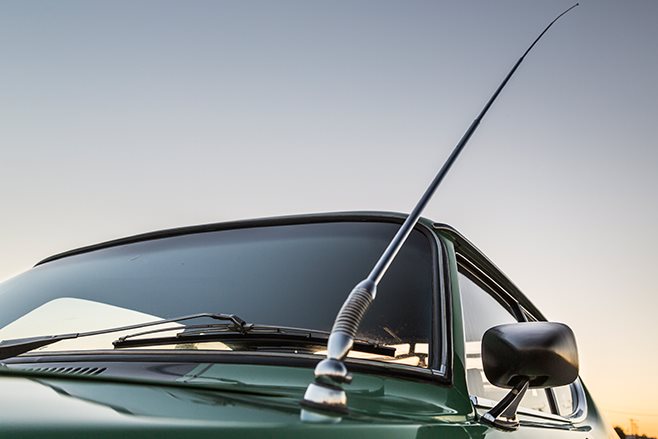 A donor engine block was found and was fitted with a balanced 289 Windsor crank, along with shot-peened and polished rods topped with low-compression forged pistons. A pair of cast Windsor heads were home-ported and fitted with stainless Manley valves and Isky springs, while a turbo-grind Speco cam and roller rockers filled the remainder of the valvetrain. 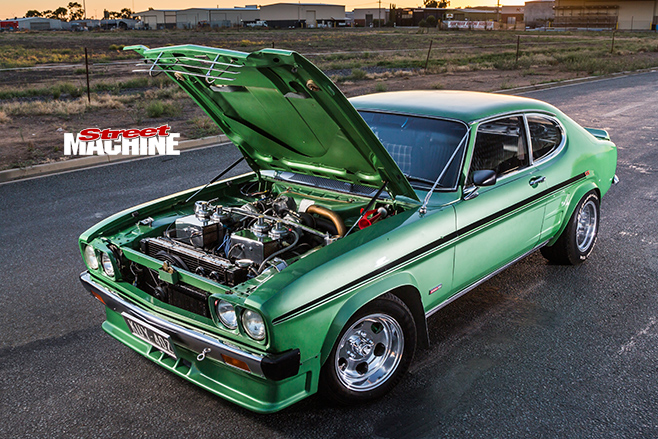 An Edelbrock Torker intake was fitted, but you’ll have to take my word for it; its presence is near-wholly disguised by the pleasure twins – a pair of Garrett T04 turbos flanked by engine pipes, a bloody big wastegate and the brace of quad 175CD Stromberg draw-through carbs sporting water injection. Phew! Try and say that three sheets to the wind. 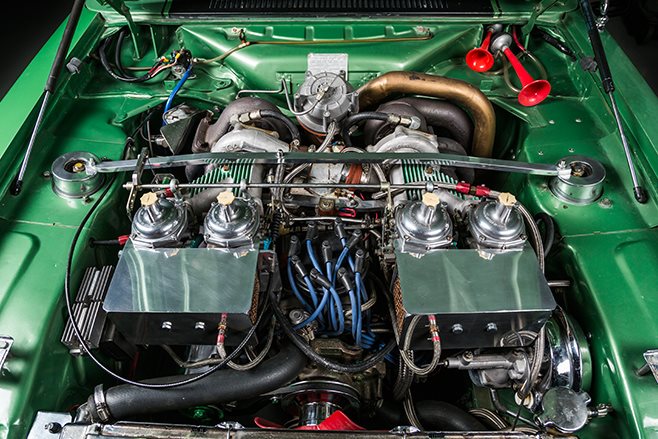 Capris have been treated to all manner of voluminous engine conversions over the years, but Neville’s twin-turbo, quad-carb 302 Windsor effort leaves scarce room in the bay for much else

“The turbo fit-up took a lot of trial and error to get sorted; remember the whole turbo thing was relatively new back in those days,” Neville says. “Then it came down to actually squeezing it all into the engine bay. I had to play around with the rack-and-pinion steering placement, but that was pretty much it.” 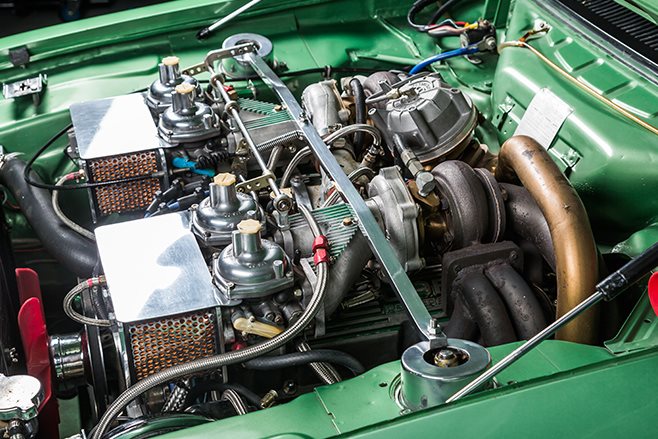 Among the many period mods are a 289 crank, polished conrods and home-ported cast heads. A WB Statesman radiator was chosen for cooling duties, while the hoses feeding the air cleaners are for a Neville-developed water injection system

As you can see by the pics, there was a hell of a lot of engine for him to shoehorn into not a lot of room, and you can’t help but be impressed by what he achieved more than 30 years ago – pioneering street machining at its best. 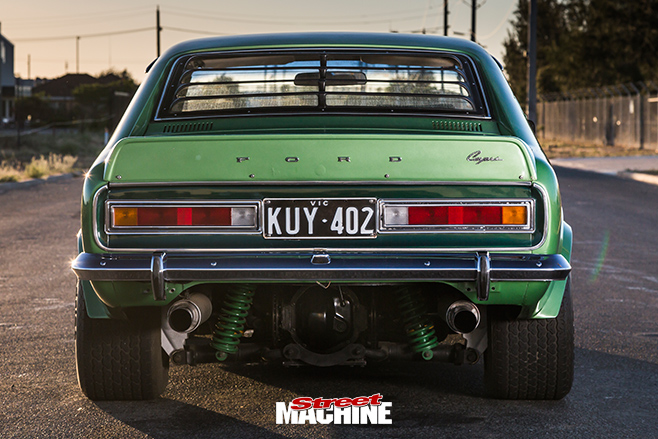 A twin 2.5-inch exhaust system was fabricated and oxy-welded at home by Neville. He also modified the front radiator support panel to mount a WB Statesman radiator, and a hefty transmission cooler and engine oil cooler were slotted in for good measure.

A Lumenition electronic ignition and Mallory coil handle the spark, while Neville machined a factory Bosch distributor to accept a larger-diameter Holden cap and rotor to negate any cross-firing issues. 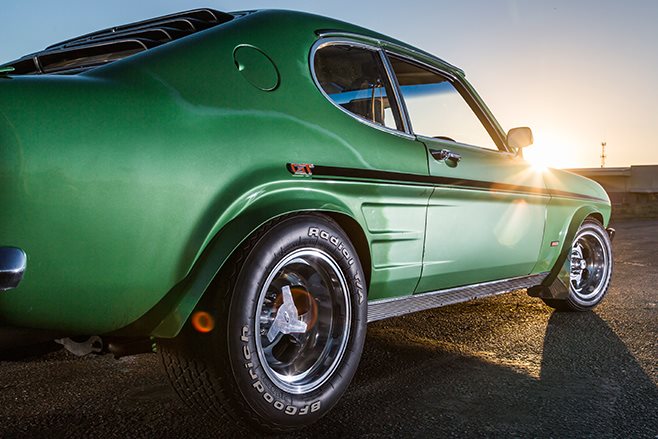 The Mustang C6 auto was retained, ably rebuilt by Neville – this car truly epitomises the ‘built not bought’ philosophy – who treated it to a strengthened second gear and Dominator 3000 stall converter.

Take a peek underneath; this is where Neville’s serious old-school ingenuity comes to the fore. The stock Capri diff was a toothpick waiting to snap, so it was decision time: “I wasn’t sure if I was building the Capri as a show car or a ‘go’ car,” Neville says. “I had always loved Jag diffs because they looked so cool all chromed up under panel vans and hot rods, but they were heavy, difficult to set up and weaker than a nine-inch. In the end the Jag diff won out simply because I was able to buy one off a local hot rodder, which saved me shopping around.” 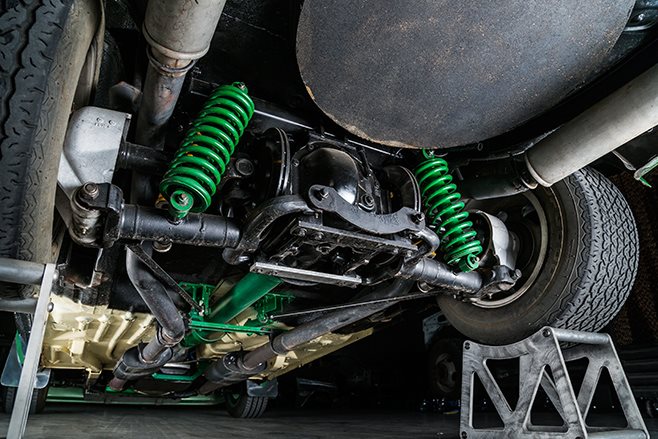 A Jaguar diff is a classic old-school styling cue and had to be narrowed a healthy 10in to stuff it between the Capri’s rear arches. Future plans call for a proper chrome and detail of the rear-end componentry to make better use of the trimmed rear pan, which was purposely cut for maximum exposure

The XJ12 diff was narrowed a whopping 10 inches to nestle it under the Capri’s flanks, and filled with an LSD centre and 3.08 gears. The rear coil-overs were stiffened to tuck between the Ford’s tighter chassis confines but without compromising ride quality, by mixing two Jag Mk X springs with a pair of heavy-duty Kings XJ12 versions. Two of the original XJ12 rear springs were repurposed as height-adjustable front springs atop Leyland P76 front strut housings, filled with Triumph Stag inserts and all battened down by an HQ sway-bar. 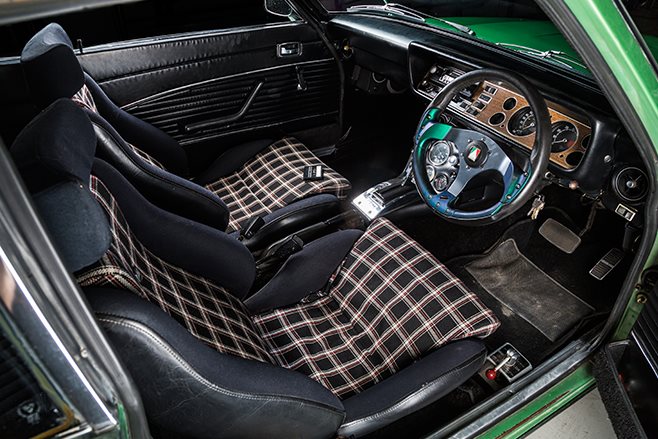 SAAS front buckets complement the stock rear item, while the Eurovox tape-deck stereo is just the ticket to smash down the road miles

The MacGyver-spec parts matching continued for the braking system, which comprises an XB Falcon master cylinder and twin VH44 brake boosters actuating HZ Holden front calipers over P76 discs, with the Jaguar inboard ventilated discs retained for the rear. A PBR line-lock system was added for when action stations are called for.

Fourteen-inch jellybean mags front and rear might be old-school now, but were all the rage back in the day, and measure in at seven- and 10-inch widths, shod with a mix of Yokohama and BF Goodrich rubber. 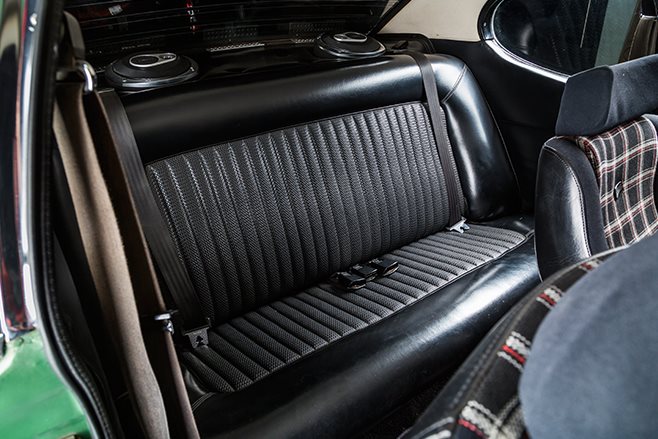 Neville’s efforts at shoehorning the Capri full of a busy engine, wide diff and big rubber necessitated some extra body mods, so it was off with the L88 scoop and on with an XB GT nostril bonnet skin to clear the carbs – more of jack-of-all-trades Neville’s handiwork – while the aforementioned rear flares were given a touch-up to better accommodate the new rolling stock. The factory Peppermint green hue remains, albeit highlighted with a fresh set of black GT stripes. 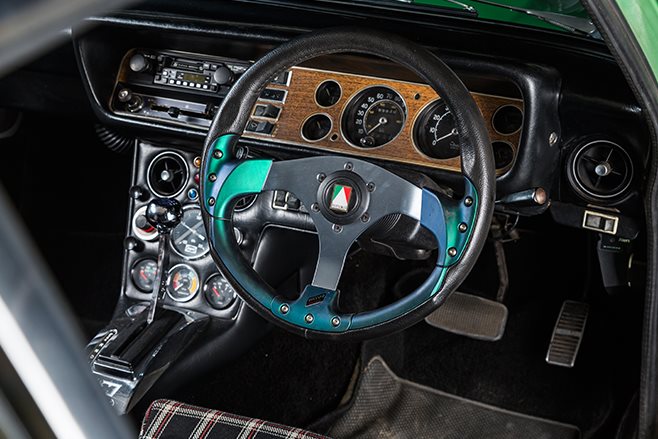 The interior is just as nostalgic as the rest of this build, with SAAS front seats and the Autotechnica sports wheel complemented by a Neville-made custom centre console that houses a B&M shifter and a host of additional gauges and warning lights. The factory sports dash remains but has been outfitted with a full Eurovox sound system: tape deck, amp and splits. “That was high-end for its time,” Neville says, “and with three-way six-inch rear speakers it still has surprisingly good sound quality.” 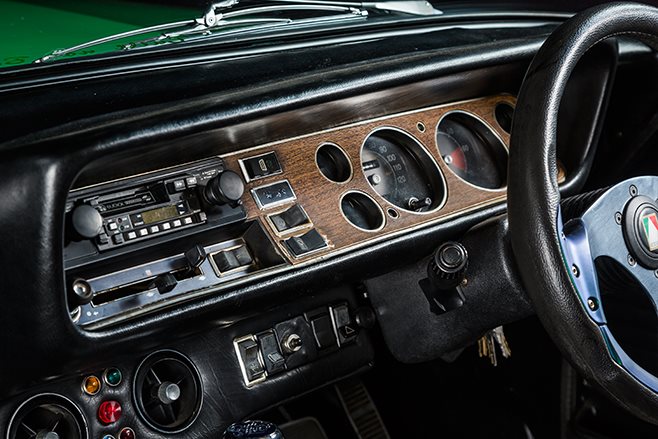 The Capri was finished by the mid-80s, and by Neville’s own admission it still needs a little fine-tuning of the rear suspension. “I raced it at Heathcote early on but struggled with wheelspin and turbo lag,” he says. “It ran a low 13, but at 120mph, so who knows how quick it could go with a higher stall converter and decent tyres.

“The biggest problem was I didn’t have a garage at home to keep it in, which meant I didn’t get to work on it and that was that. My wife Berni and I had started a family too, so I just put it aside and kept it in hibernation for 20 years. 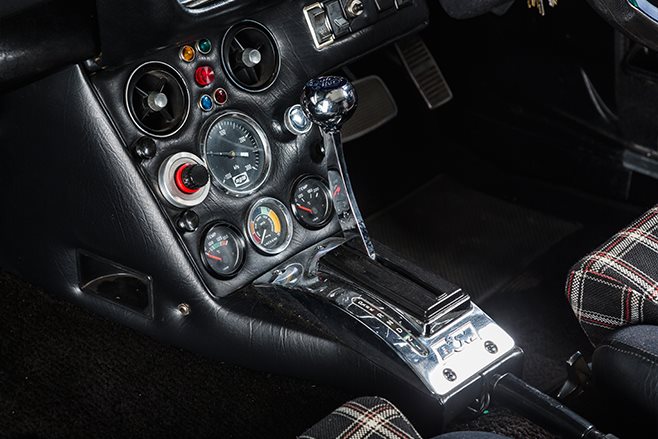 “When it did finally get a spot at home it had become such a time capsule that I didn’t want to change it. We take it out regularly now, and it attracts plenty of attention; people tend to do a double-take, and the first thing they say is: ‘What the f**k?’” he laughs.

“I’m often asked why I don’t update it to fuel injection, but the simple answer is because it’s different and I want people to see how we used to do things before you had fuel injection and could just buy things off the shelf.” 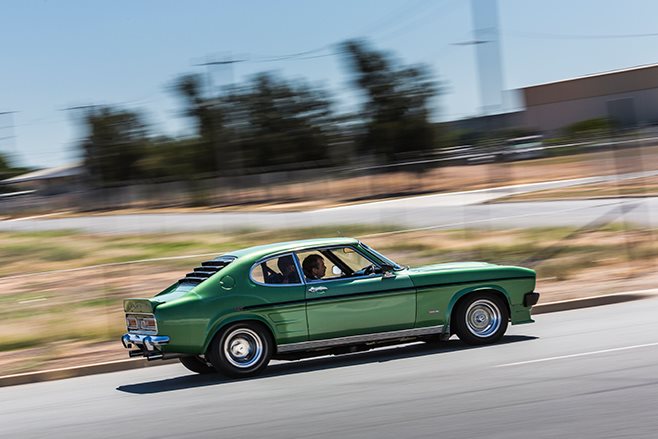 Neville’s youngest son Mark is completing his apprenticeship at Southern Rod & Custom and is keen to refinish the car, which Neville is fine with, on one condition: “He has to chrome that Jag diff! I went to so much effort to fit the bloody thing and even cut out the rear pan to show it off; it deserves to have its time to shine,” he laughs.

“As for me, I’m keen to build a Mk1 twin-cam Escort, or a ’34 tudor hot rod. Either way, one thing’s for certain: The next project won’t take so long!” 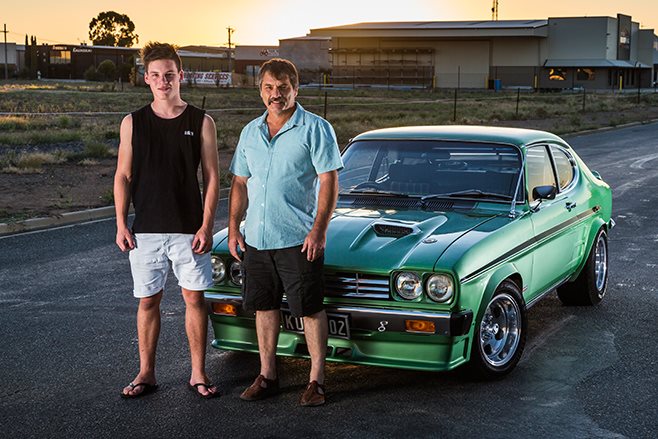