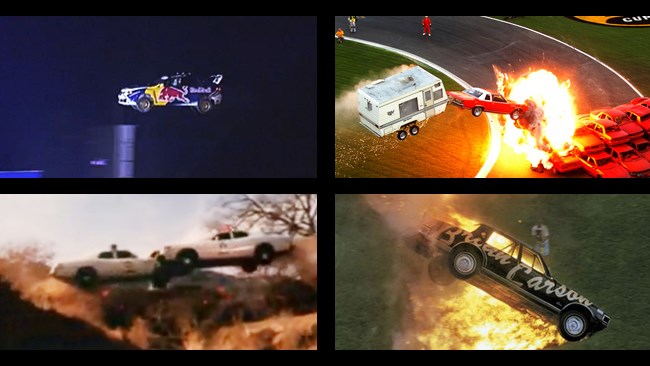 Since the 30s daredevils have tried to push higher, faster and more dangerously. Here are the Top 10 best car stunts ever!

You’d be forgiven for thinking car stunts were born in the 70s among the moustaches and cheesy slow mo of the Dukes of Hazard TV series. But as far back as the 30s testosterone-fuelled daredevils were ready to go to the edge.

For decades to follow, huge crowds turned up at nail biting stunt shows to watch 'Spanky Spangler' or Brian Carson risk their lives by jumping cars through flames and buses. In Hollywood, there was a pay-packet to be made as Remy Julienne and later H.B Halicki became famous for their pioneering action films.

But there were plenty of failures and accidents too. Canadian Kenny Powers broke his back 7 times during his career – the final time in the 70’s when his car disintegrated midair half way across the St Lawrence River.

2010 sees CGI technology and the high precision skills of rally car drivers replacing the adrenalin junkies of the past. Today’s stars - the likes of Block and Pestrana - may smash records, own TV commercials and of course be Top Gear regulars, but they are nevertheless protecting the legacy of those original car stuntmen.