This article on Brian Apap's shed was originally published in the March 2013 issue of Street Machine magazine.

But if one tough car can plunge you into a state of utter financial ruin quicker than a divorce (and let’s be honest, cars have been known to prompt one or two of those over the years), then imagine the costs involved in building, maintaining, registering and insuring three of them. 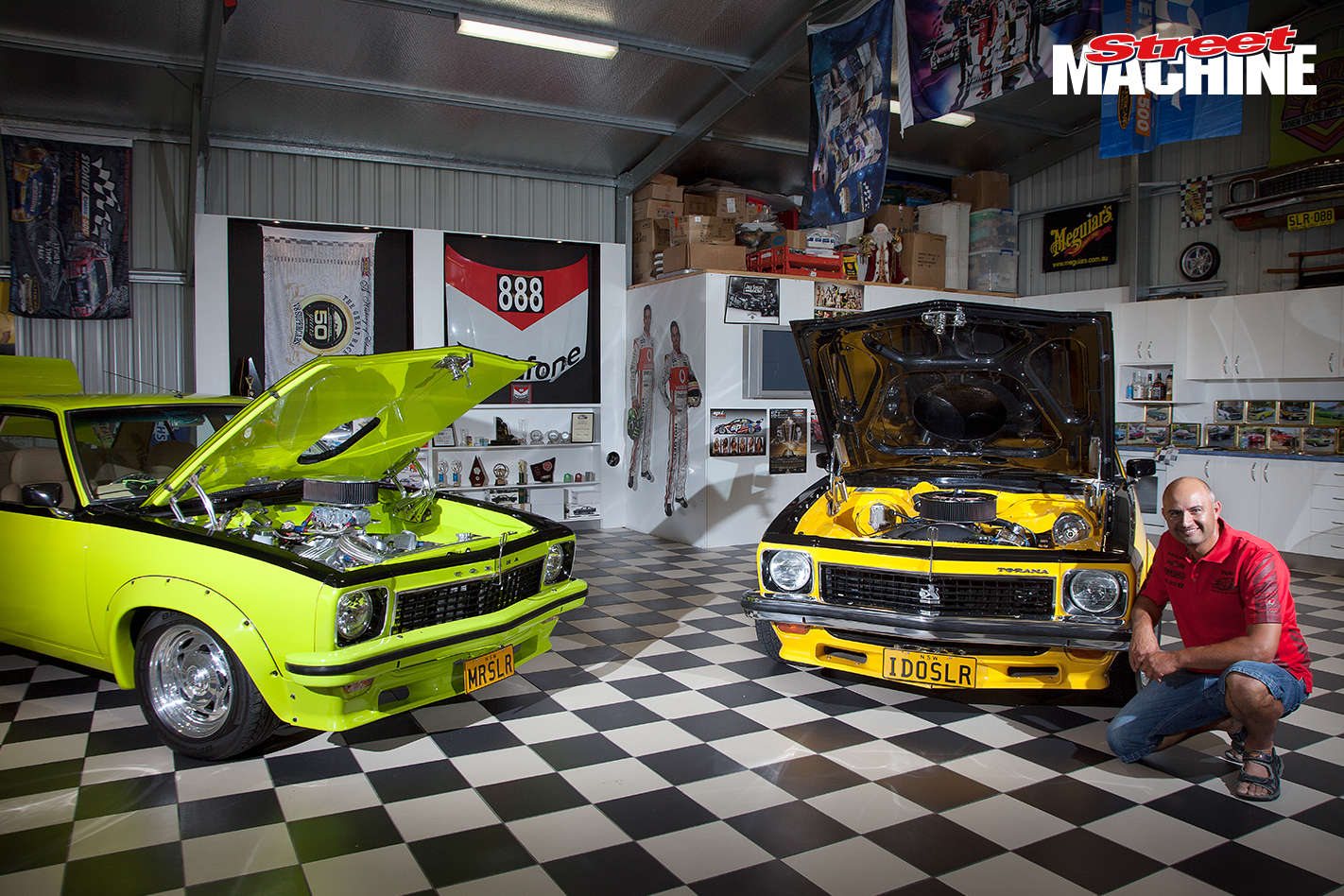 The reason Brian Apap is wearing a grin of sheer fulfilment in these photographs is that he’s got it all worked out. He’s a farmer by trade, and naturally an enterprising, resourceful kind of bloke who can spot an opportunity when he sees one and isn’t afraid of a little hard work.

His shed on Sydney’s northern outskirts is an absolute cracker, and it’s full to the brim with magnificently presented LH and LX Toranas. Here’s the clincher though: 12 months back, Brian and his wife Noelene kicked off their wedding car business, and slowly but surely, the flared beauties are bringing home the bacon. 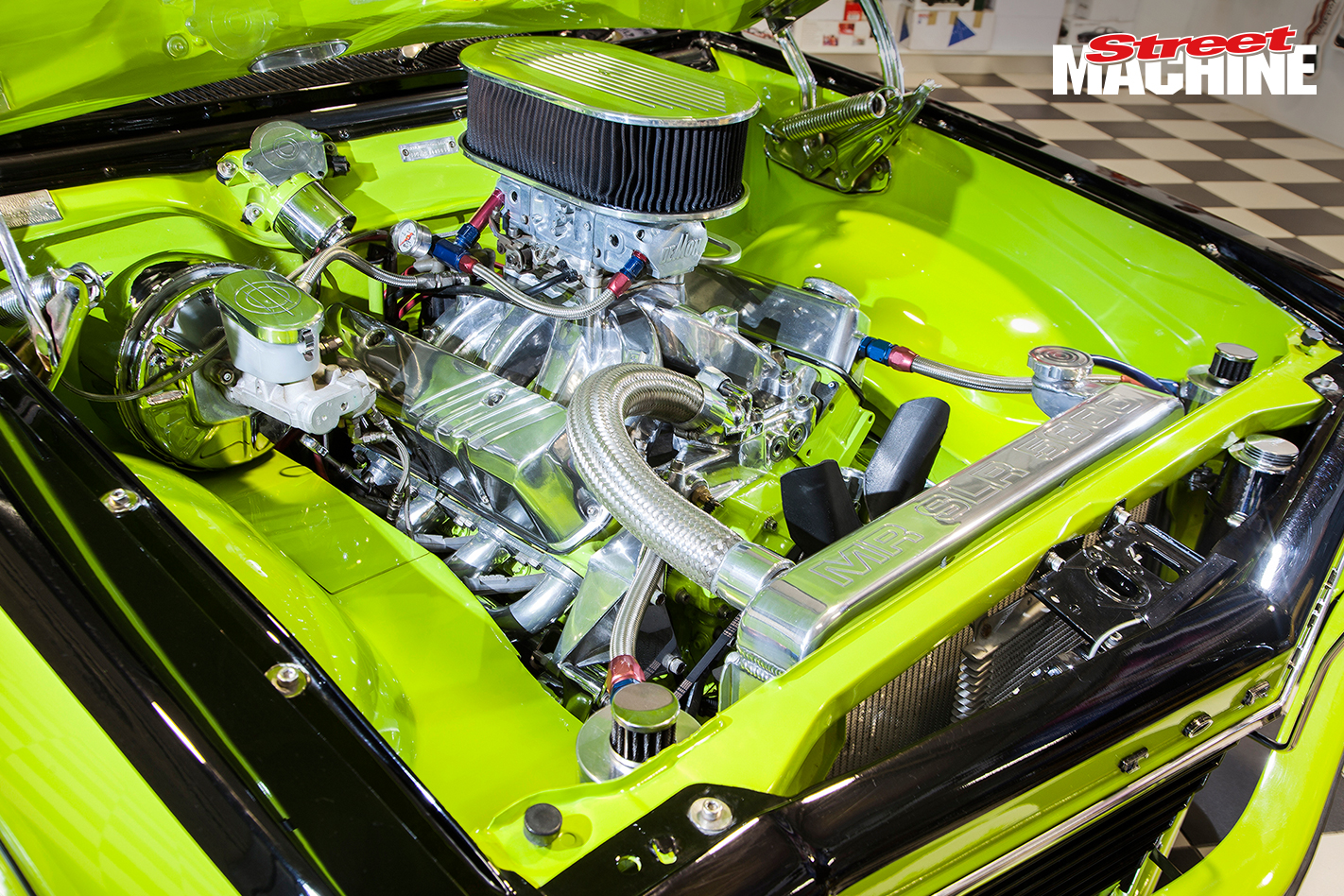 A three-time Summernats Elite Hall occupant, MRSLR has collected a raft of trophies from various shows over the years. It features a 355ci stroker with a Harrop manifold, T350 and 9in, custom leather trim and Billet Specialties wheels. It’s covered 1000s of road miles in the line of duty despite its detailed undercarriage

After selling his first Torana as a young bloke and going 10 years without an automotive toy to speak of, Brian purchased the Barbados Green LH SLR as a complete car with a 253, white Simmons wheels and a standard SLR interior.

Soon afterwards, it was stolen and recovered. This prompted a rebuild which saw it adorned with a tough 355ci stroker, Billet Specialties wheels and a custom leather interior, and it made the Summernats Top 60 three years in a row. “The guy I bought it off owned it for 20 years and never had it painted,” Brian said. “I’ve had it for 12 years now, so aside from the bonnet and engine bay, the paint is at least 30 years old!” 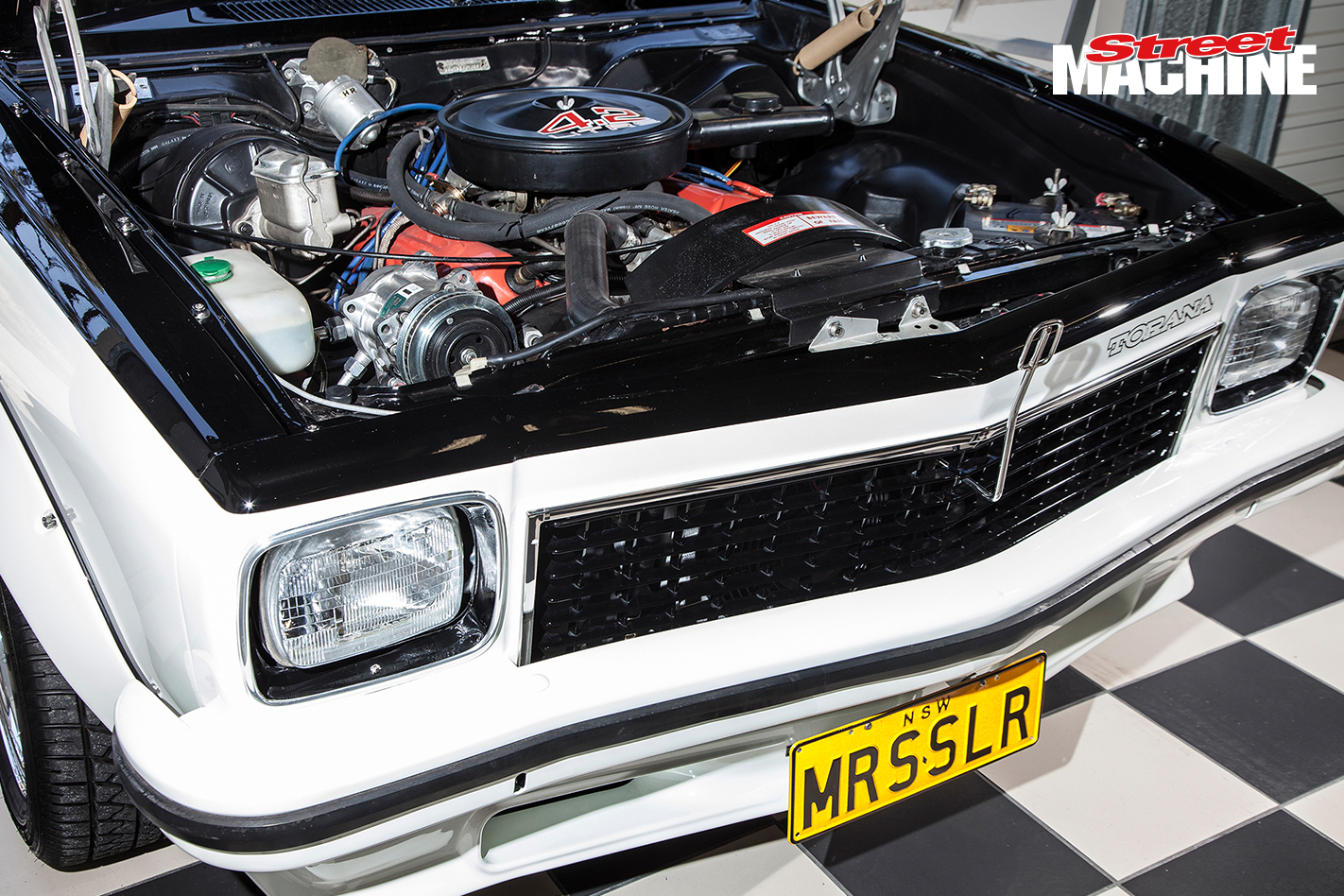 The engine bay in the white LH is completely unrestored, showing just how good the stock car was. Brian and his brother-in-law travelled to Adelaide to view the car, decided to buy it on the spot and drove back to Sydney without an issue. It’s a 253/Trimatic with a stock Banjo diff, HQ brakes and an SLR interior. It now runs air conditioning, which is beaut for weddings

Despite the fact that it now enjoys regular use, the car is still in incredible condition, and was only retired from the show circuit because Brian thought people were probably getting sick of looking at it. But what about the other cars? “Before too long we had four kids and we couldn’t cruise around in the one car anymore, so I decided to buy a car for the missus so the whole family could come along.”

You’d reasonably assume that’s where the white LH bearing MRSSLR plates comes into the picture but that’s not actually the case. Many years later, the first car he bought for Noelene is still in the build. But with plans to unveil it at MotorEx once it’s complete, it was hidden under a cover, well away from our prying lenses. “Yeah, that build spiralled out of control a bit,” Brian laughed. “I’ve always wanted to build a full-on show car, something of Top 10 quality that might not please everyone but which for me is perfect.” 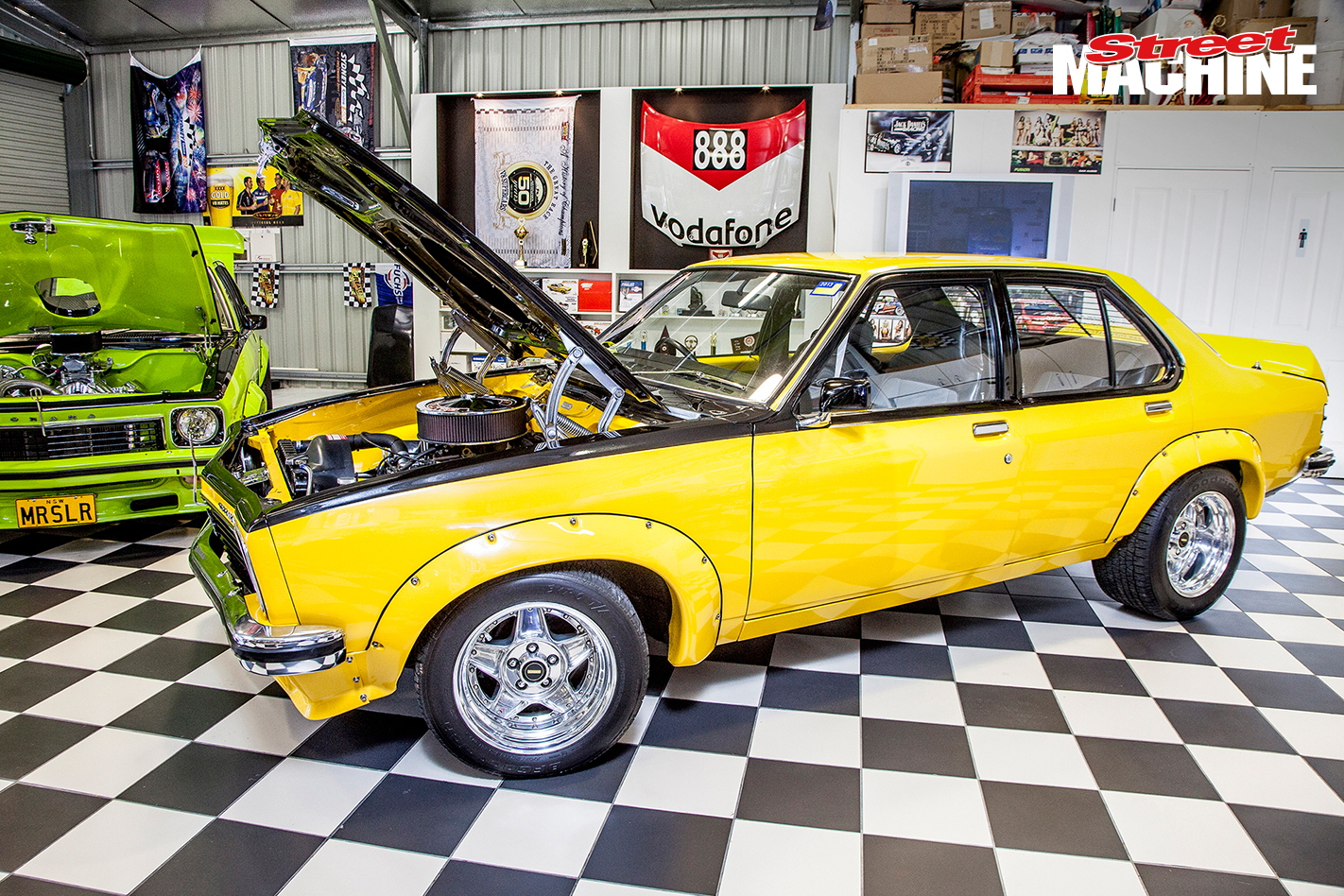 IDOSLR is a Chrome Yellow LX, running a Turbo 400-backed 308, Banjo rear and Simmons B45 rollers. Noelene prefers driving this over her 253-powered MRSSLR due to the extra grunt

Brian’s playing his cards very close to his chest at this stage but suffice to say that when it hits the scene, it won’t go unnoticed. But eventually Brian relented to pleas from Noelene for a car she could drive and they purchased a third Torrie. That car was a 253-powered maroon LH SLR that once created a lot of interest at Toranafest for its sheer originality and overall condition. It now wears flares, Simmons rims, a black and white paintjob and those MRSSLR numberplates. 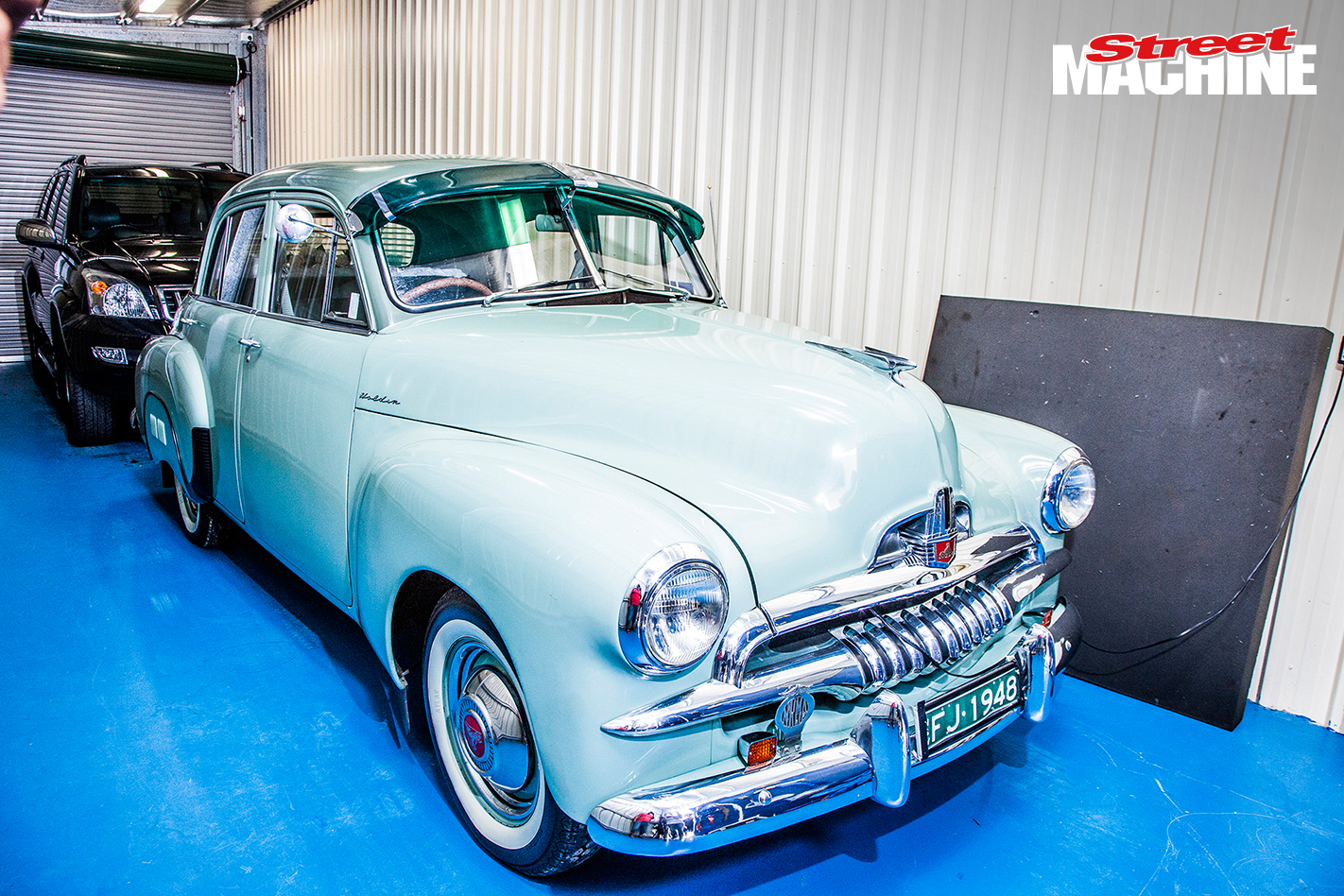 The apple doesn’t fall far from the tree: Brian’s dad runs around in this pristine and unrestored 30,000-mile FJ Holden. He regularly drives the white Torana for weddings and wants to buy one soon

“At that point we had the two cars — MRSLR and MRSSLR — and people started asking us to do weddings,” Brian explained. Initially, weddings were only done for family and friends, and they got immense enjoyment out of doing them. But as time went on, the realisation struck that there was money to be made. “We figured that we had nothing to lose, so we made a website and then the phone started ringing,” Brian said. “We decided to buy another car — if the business went well, we’d keep it but if not, we’d get rid of it.” That sounds like a very convenient excuse indeed! Enter the Chrome Yellow LX, which, like the rest of the collection, features a full A9X-style bodykit and the quintessential drop tank. 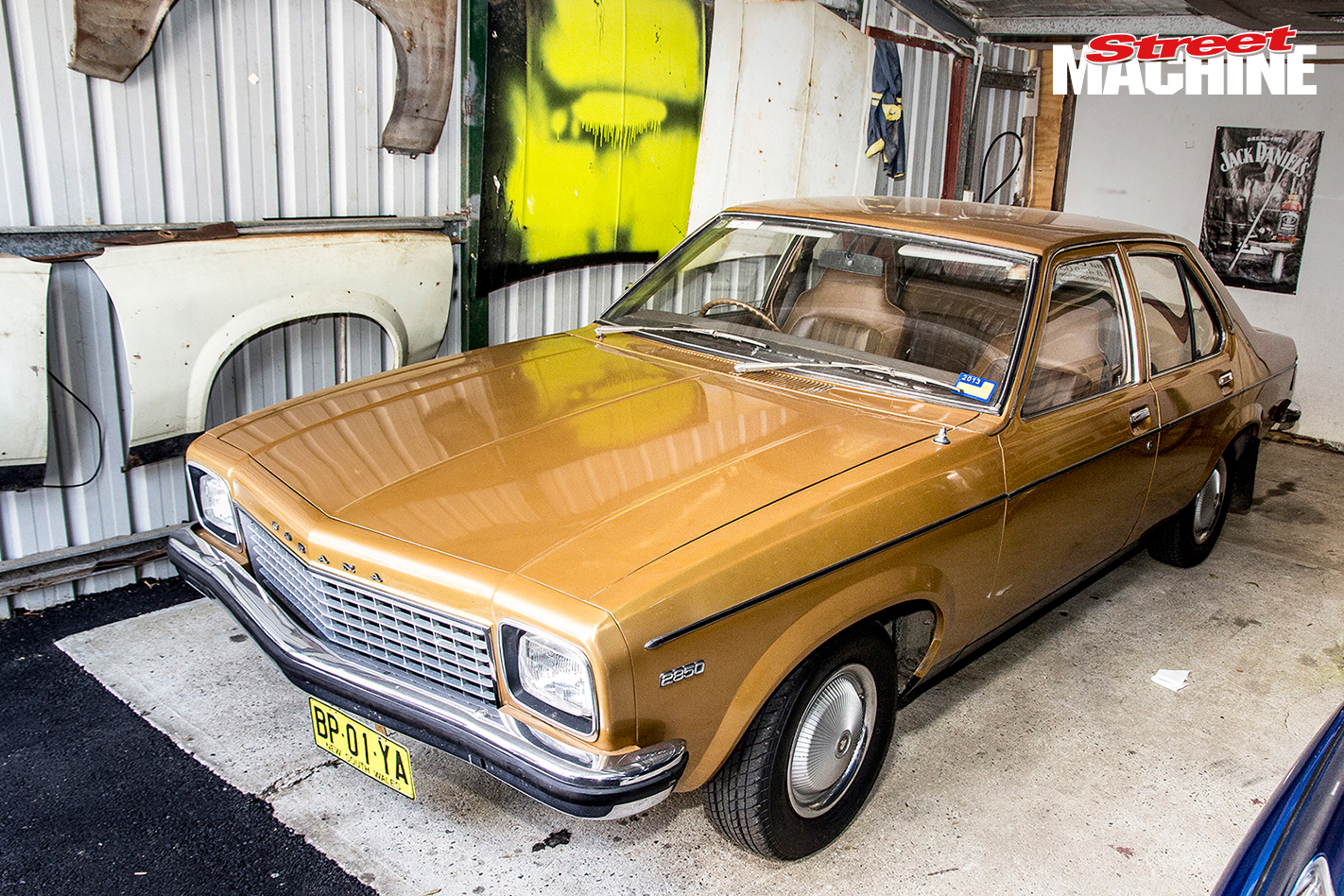 Son Aaron is a third generation car-loving Apap, and this is his grandpa-spec Contessa Gold six-cylinder auto LH

But an arsenal of tough Torries is nothing without a beaut shed in which to ogle them, and the Apap’s is Disneyland for revheads. Surgically clean, with chequered flag porcelain tiles fore to aft, it’s rammed with memorabilia, posters, flags and an awe-inspiring display of model cars. “Thirteen years ago we sent Noelene’s parents away on a holiday and in return they bought me a model LJ Torana from Biante in WA,” Brian said. “At the time I thought: ‘Why did they buy me a toy? What am I going to do with it?’ and I chucked it in the cupboard; I wasn’t even interested. “Then for my birthday Noelene bought me a green Torana like mine. I went on the Biante website and thought: ‘Oh yeah, I’ll collect a few Toranas.’” 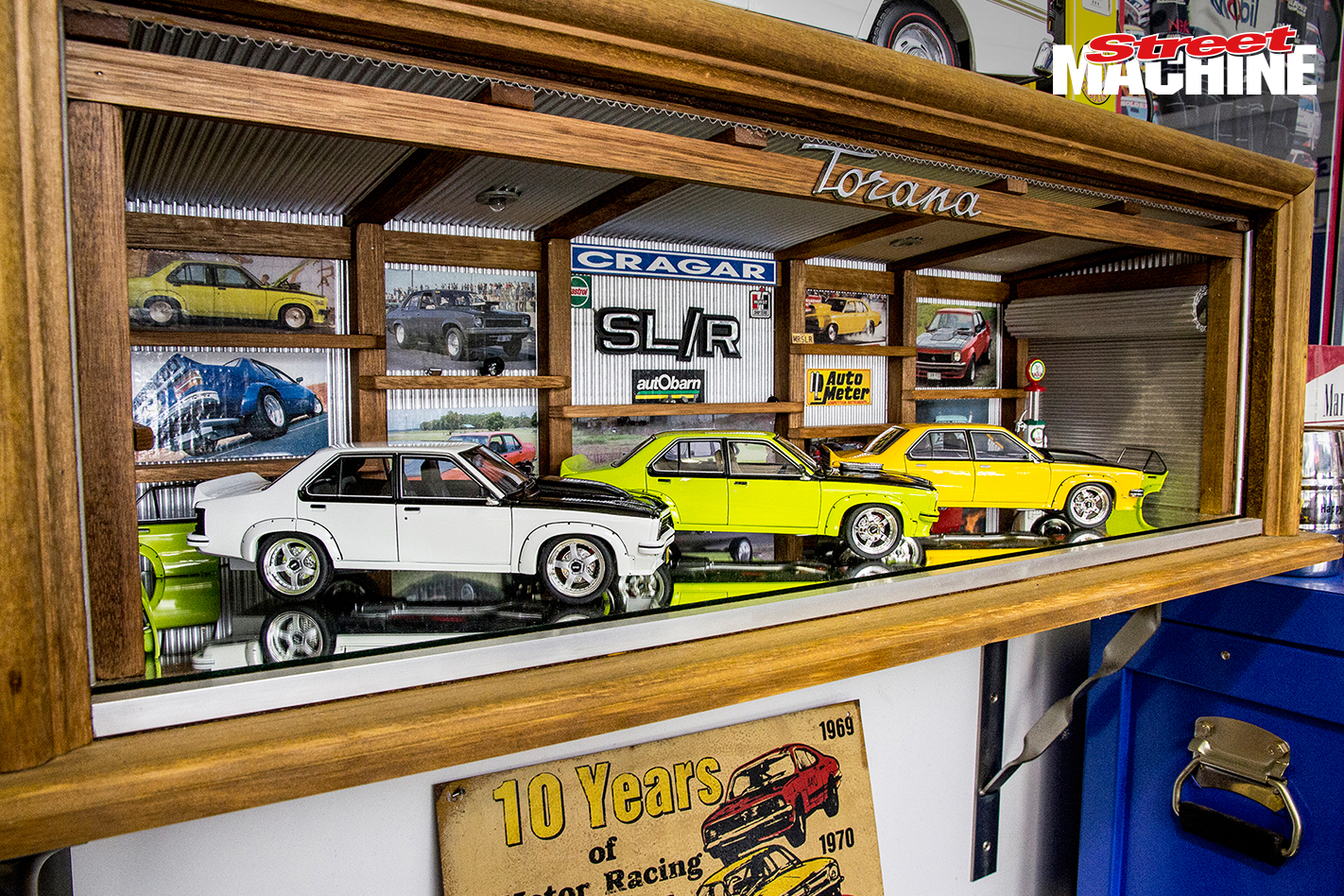 If the cars in this diorama look familiar, it’s because they’ve been custom-built by a mate to match the real versions. Each has different wheels, modified bonnets, painted bars, numberplates and even a custom interior for MRSLR

‘A few Toranas’ has now become more than 500 models, with everything from Holdens and Fords to Mini Coopers, Jags, Nissans and Beemers represented. There are more in the house too. There’s also a flat-screen television mounted on the wall for viewing all the important motorsport events. When the V8s are on telly, the shed is a hive of activity but it’s a multi-purpose facility, having hosted birthdays, christenings and communions. 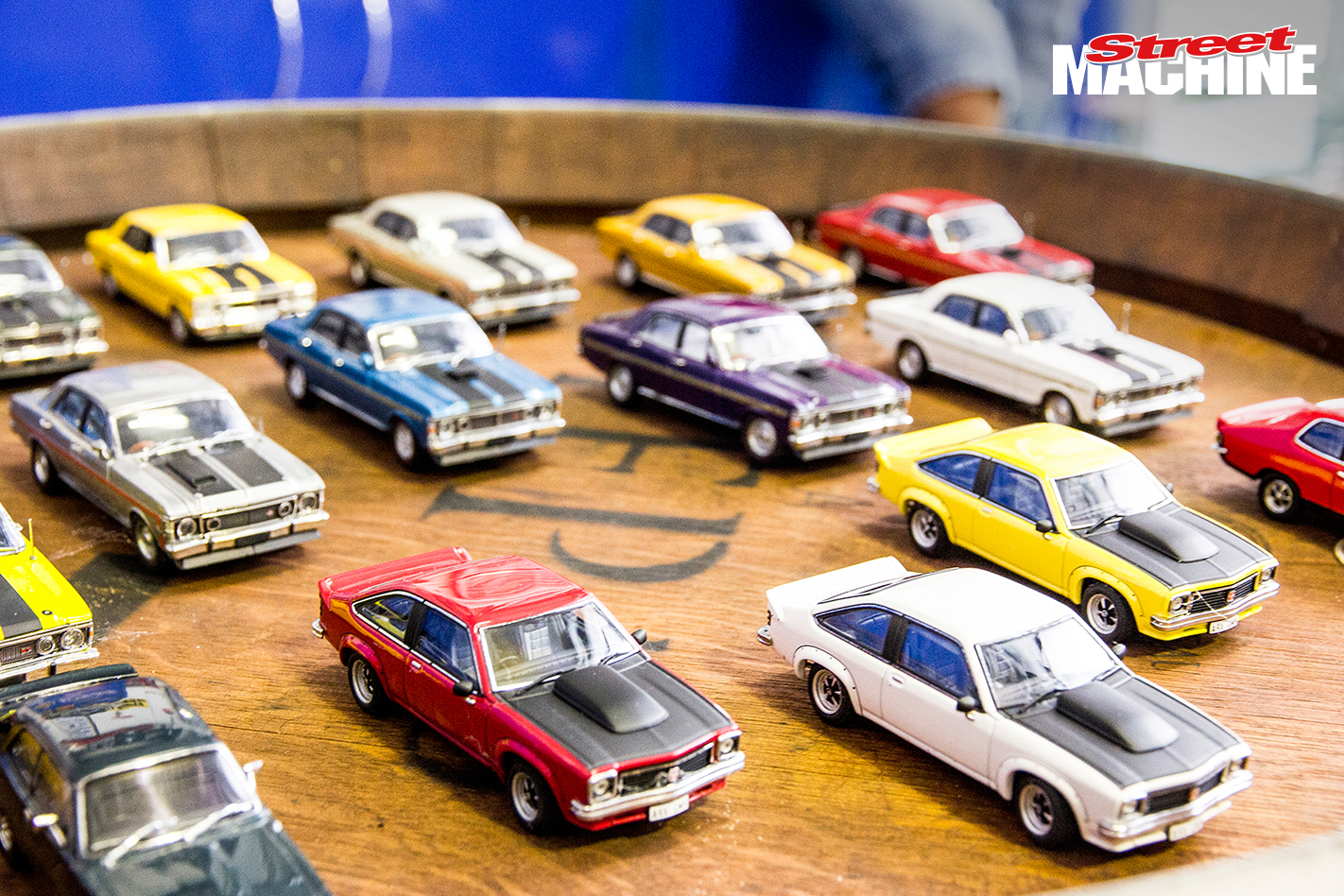 “When my mates come over, they come straight to the shed — we don’t even go in the house. On Bathurst weekend we’ll go up on the Friday or Saturday for a look and to take in the atmosphere, and then on Sunday we’ll be in the shed with the barbie going and we’ll have 50 or 60 people in here. 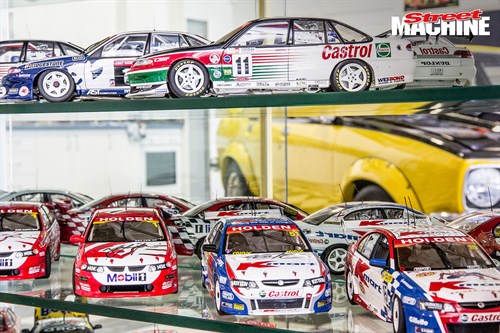 This cabinet houses every available Bathurst winner from 1966 to present, with all but two signed by the drivers

“They all bring their cars and their kids — it’s not just for the boys. There’s never the whinging wife coming in, saying: ‘You’re spending too much time with the boys’ because the whole family is involved.” 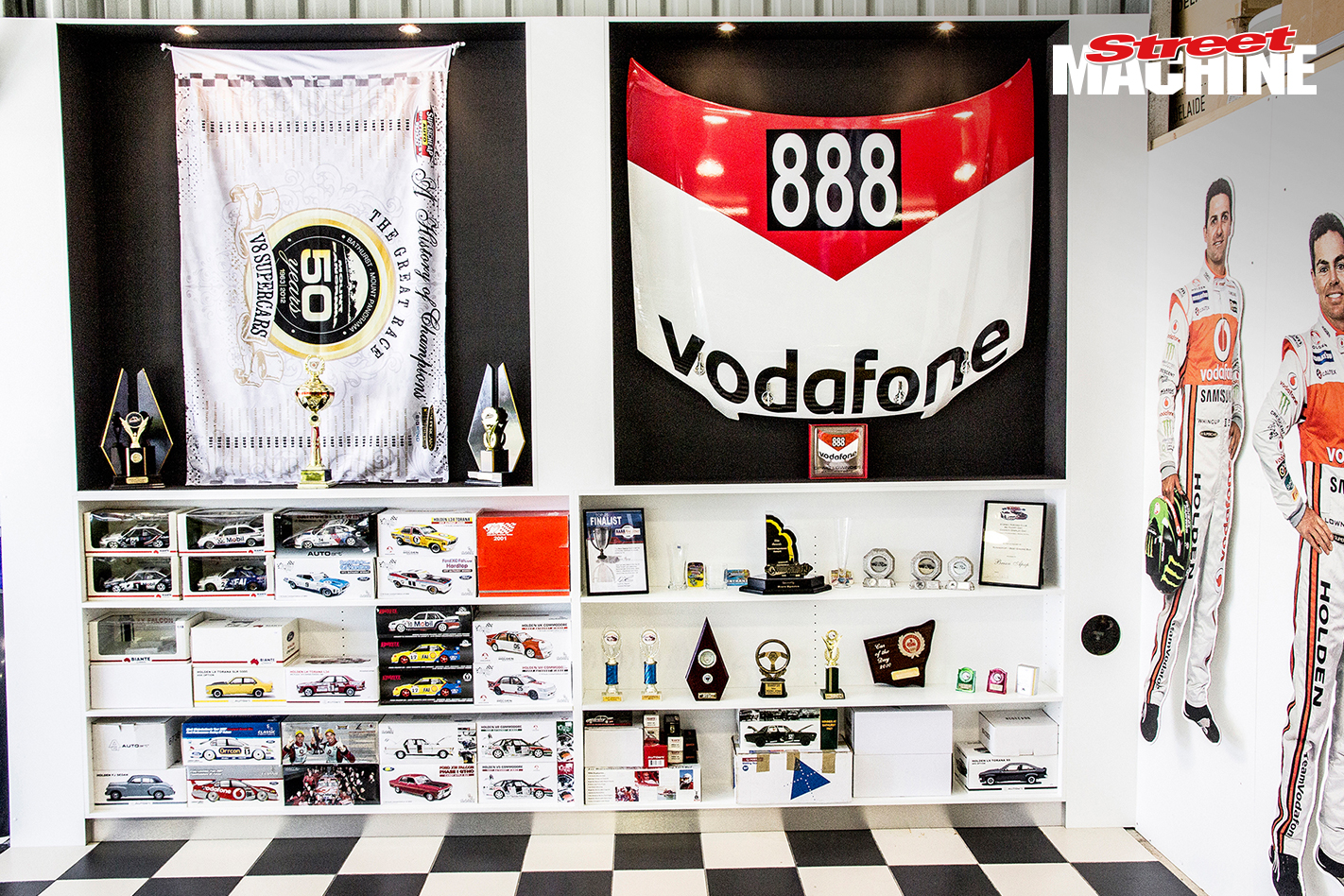 Brian always wanted a nice shed but he was told at the time that the one he was building was far too big. Now however, with the wedding hire hitting its straps, an extension may be in order. “We average a booking every second weekend this year. Some weekends we have two jobs on the one day. But it doesn’t seem like work — it’s something we enjoy,” Brian said. “I’d like to finish the red car but the way things are going, we may need to expand the business and get some more cars for the fleet first.”

Brian and Noelene have had the foresight to put themselves in a position where rather than sending them broke, their muscle cars are bankrolling the purchase of even more muscle cars, and for that they have our infinite respect.