This gorgeous Ford Falcon XM coupe is Jason Rachele's first build, and he knocked it right out of the park

THERE are no two ways about it – building cars ain’t easy. More often than not, developing the vision and the skills required to piece together a top-quality street machine is something that’s done by making countless mistakes over the course of numerous projects, and learning from each and every one. 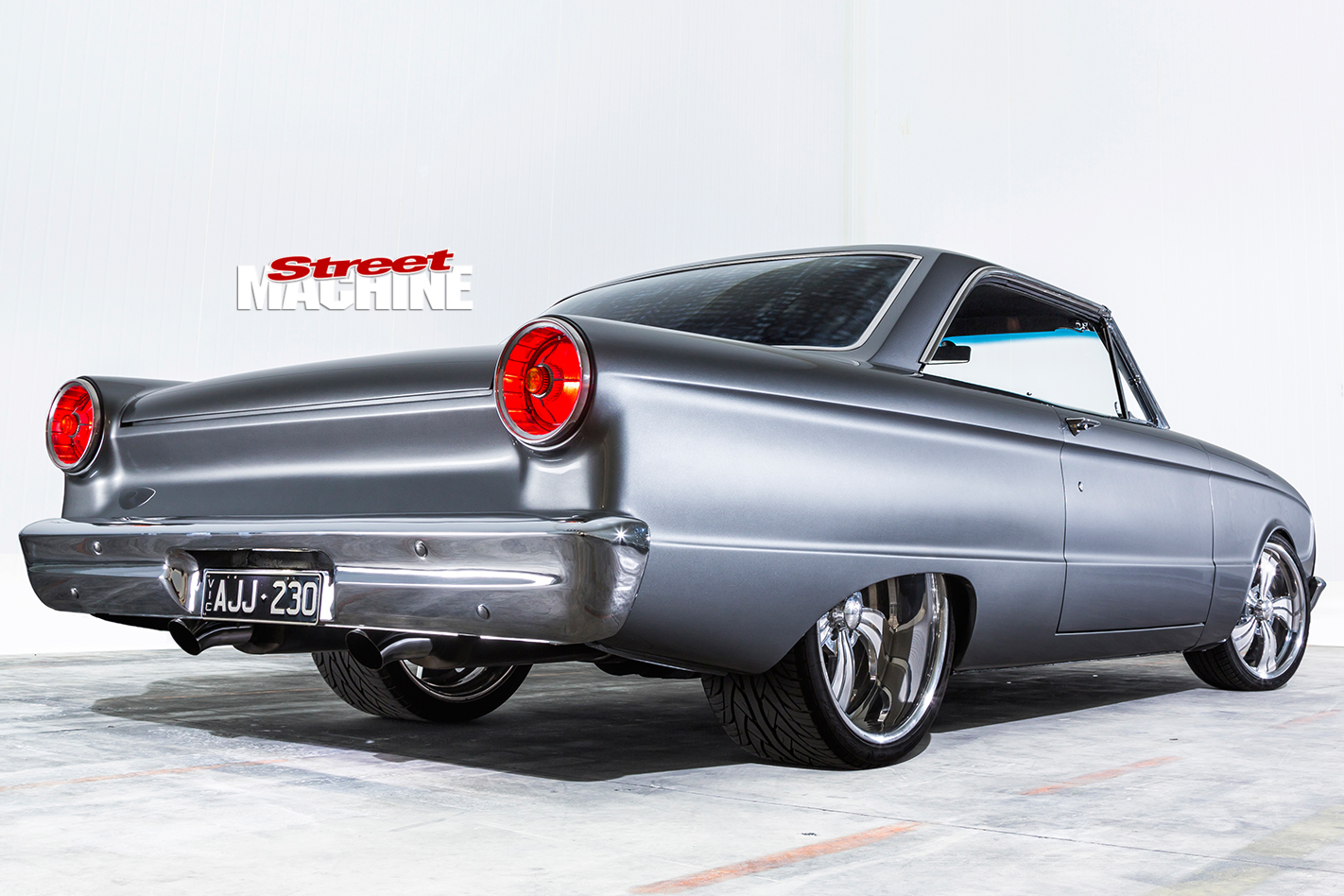 The body was seam-welded and the fuel filler was deleted, with an aviation-style filler flush-mounted in the top of the driver’s side rear quarter. All moulds and emblems were deleted, the rear windscreen flush-mounted & the front chrome moulds painted – all in the name of a cleaner look

Then there are guys like Jason Rachele who build masterpieces like this XM Falcon coupe on their first attempt. Granted, he took his time and had the guidance and support of a bunch of car-mad mates, but the XM is certainly of a standard befitting a far more experienced car crafter. 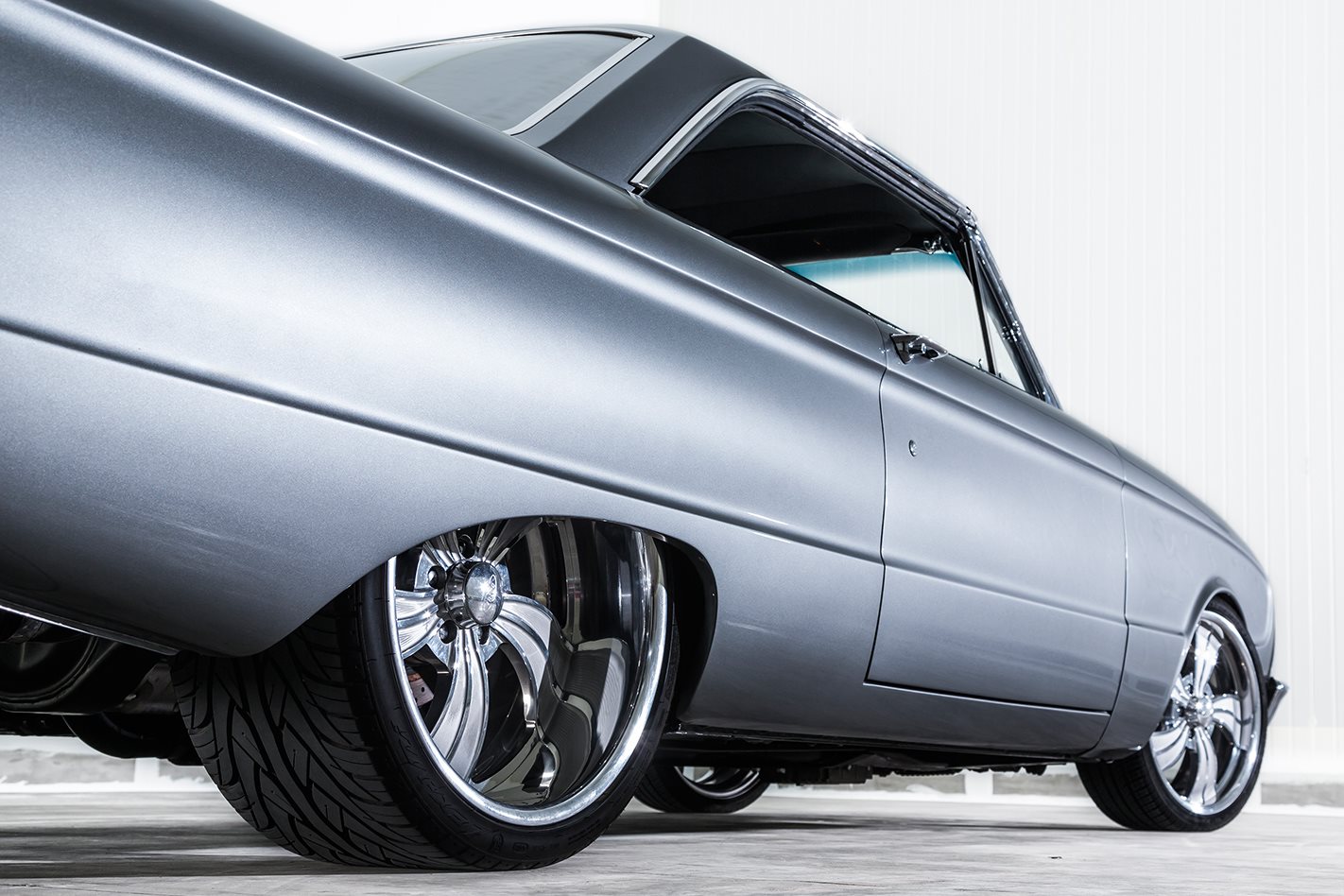 Based in the street machine heartland of Shepparton in rural Victoria, Jason has always been around cars. “My dad had a Wild Violet XY GS from new, which is now my brother’s car, and when I was growing up on the farm Dad and his brother had XY and XW utes as their company cars,” Jason says. “It was always said that you drive a Ford or nothing! I liked XYs, but we already had one in the family, so I thought I’d do something different.” 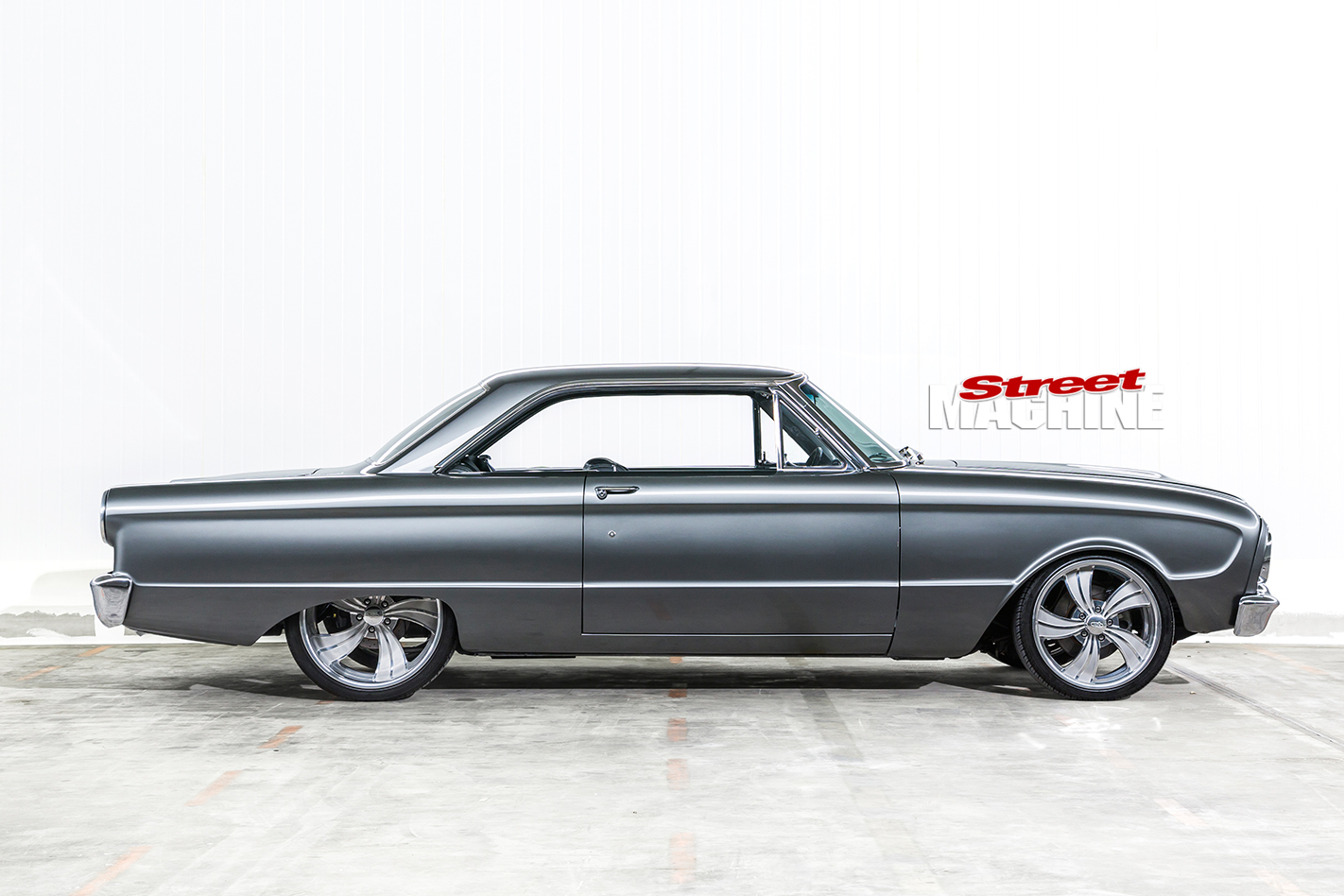 The first thing you notice is the way it sits. A great deal of work is required to get a 285/30/20 tyre under the bum of an XM Falcon and have it sit so low, and Jason went all out with a three-quarter chassis, tubs, four-link and coil-over shocks

Jason’s wife’s had an XM coupe in her family back in the 90s, so he always had a soft spot for them, and when he eventually went on the hunt for a project car, he found one tucked away in the Melbourne suburb of Reservoir. It was in great nick – straight, no rust and still registered – so Jason handed over the cash and drove it home to Shep. 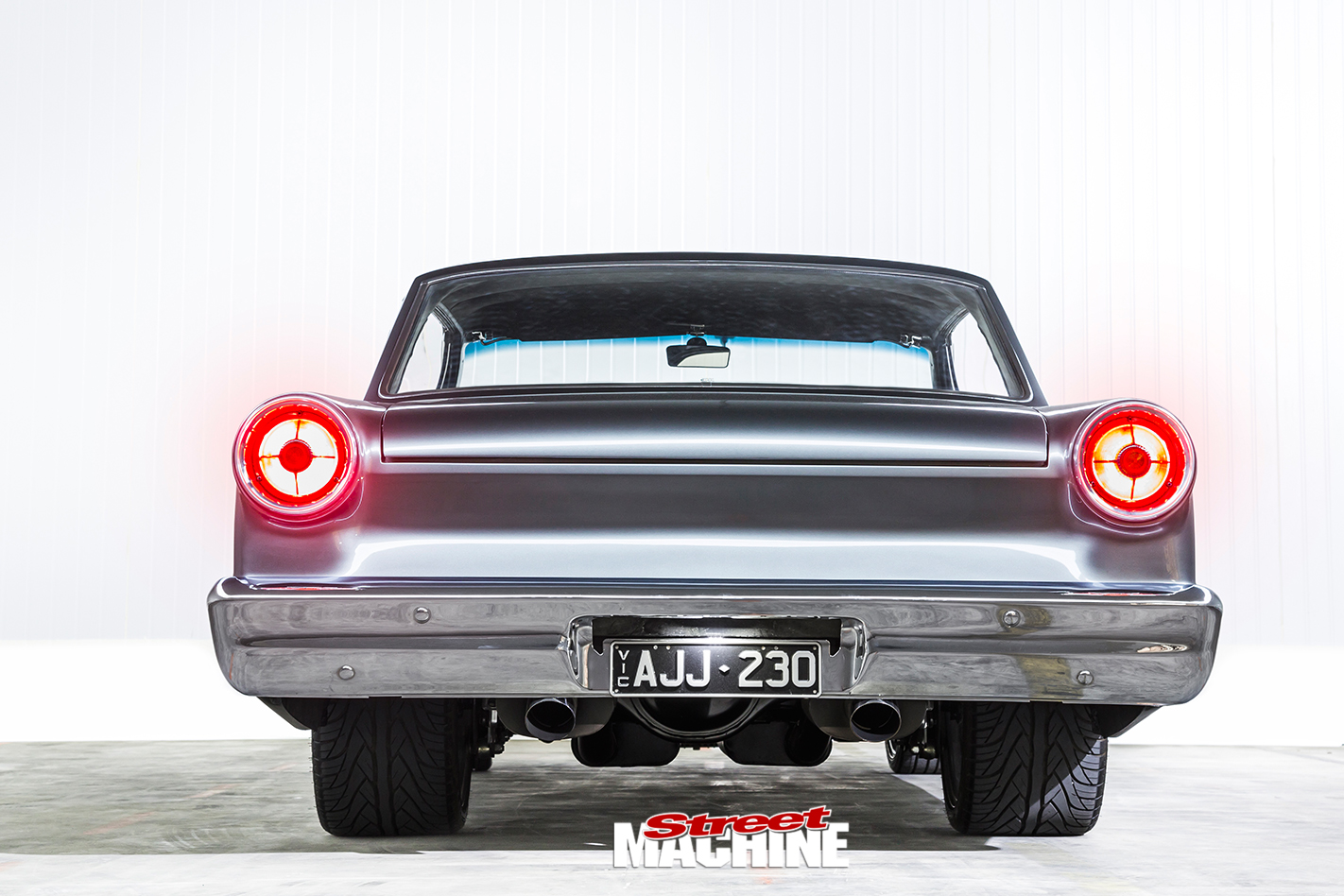 “That was in 2002, and it was all new to me so I didn’t really know where to start,” he says. “I took the car to a workshop and had it stripped and the motor pulled out; then it sat there for months until I worked out where to take it and what to do next.” 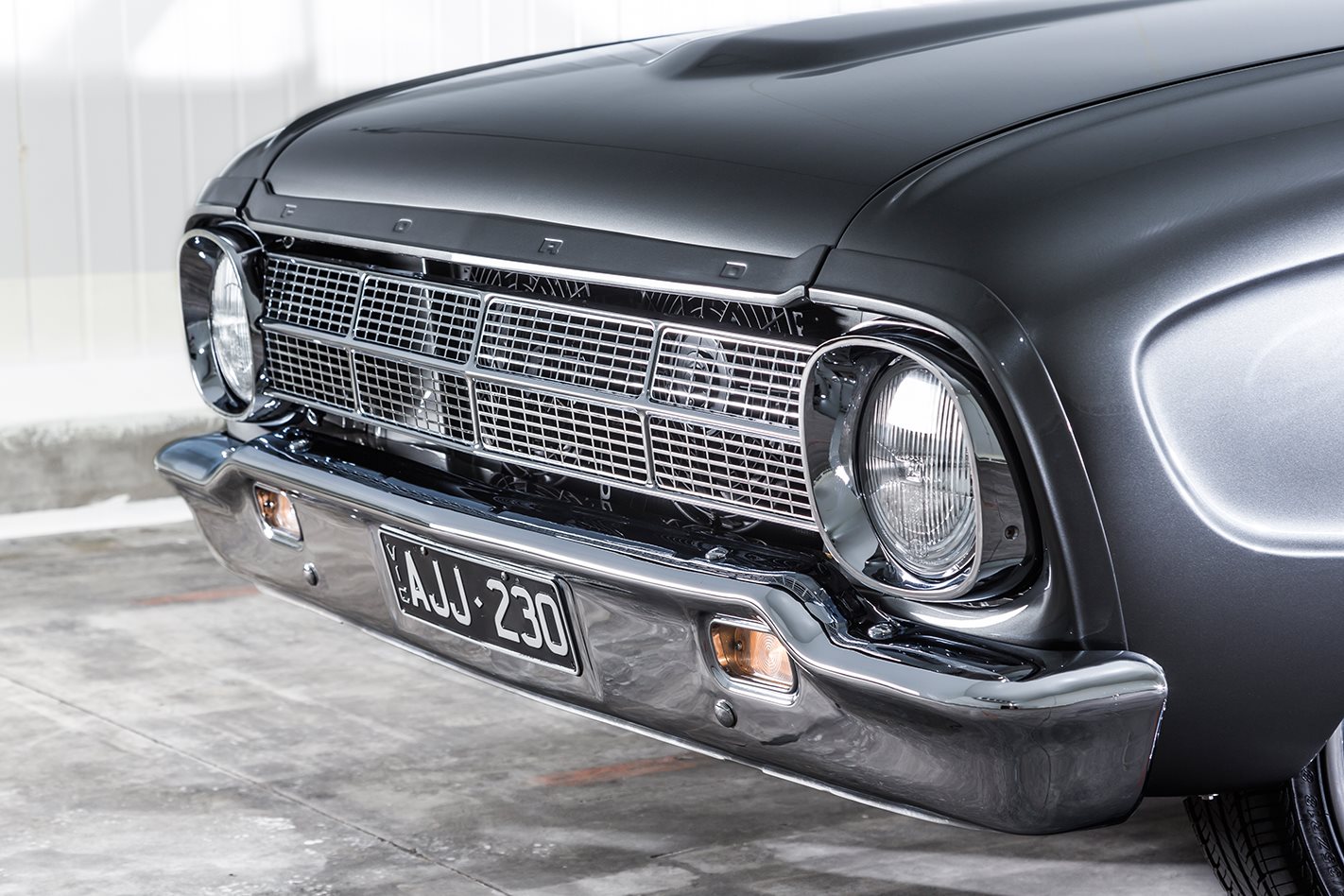 Jason knew a bloke by the name of Con Kreskas who was into his cars and pretty handy with a welder, so he took the XM to him and they discussed the length and breadth of the build. 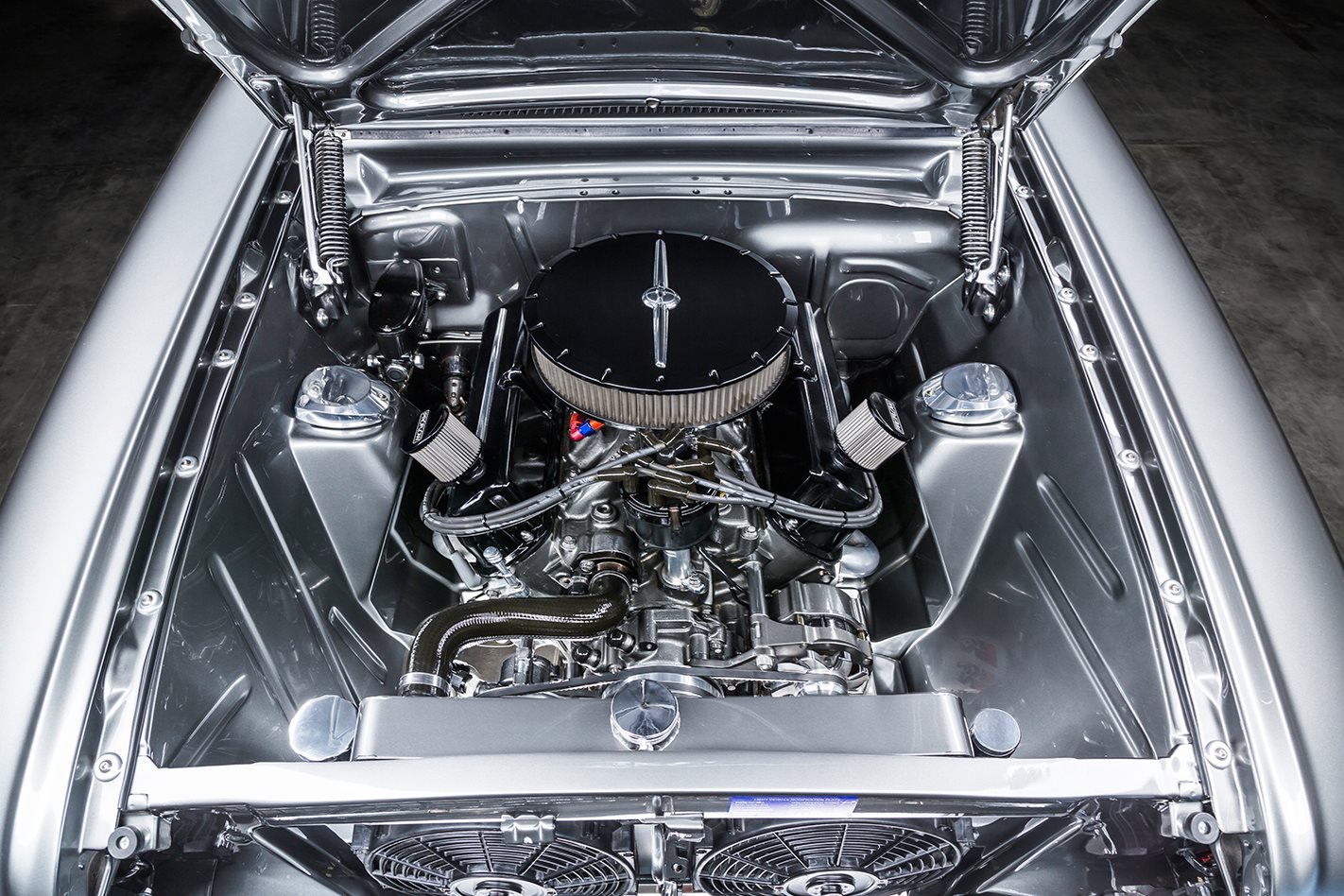 Most of the car’s factory characteristics remained in the engine bay, rather than going for a flat firewall and other typical show car tricks. The factory strut towers had to be clearanced to free up some real estate for the headers to allow the 351ci Windsor to breathe, and the radiator support needed to be modified for the bigger radiator and thermos

“I told him I wanted big rubber on the rear and he said we’d have to tub it. We also talked about the front end and what motor I wanted to put in it. Luckily my father-in-law owned an engine reconditioning shop, so he built me a 302ci Windsor.” 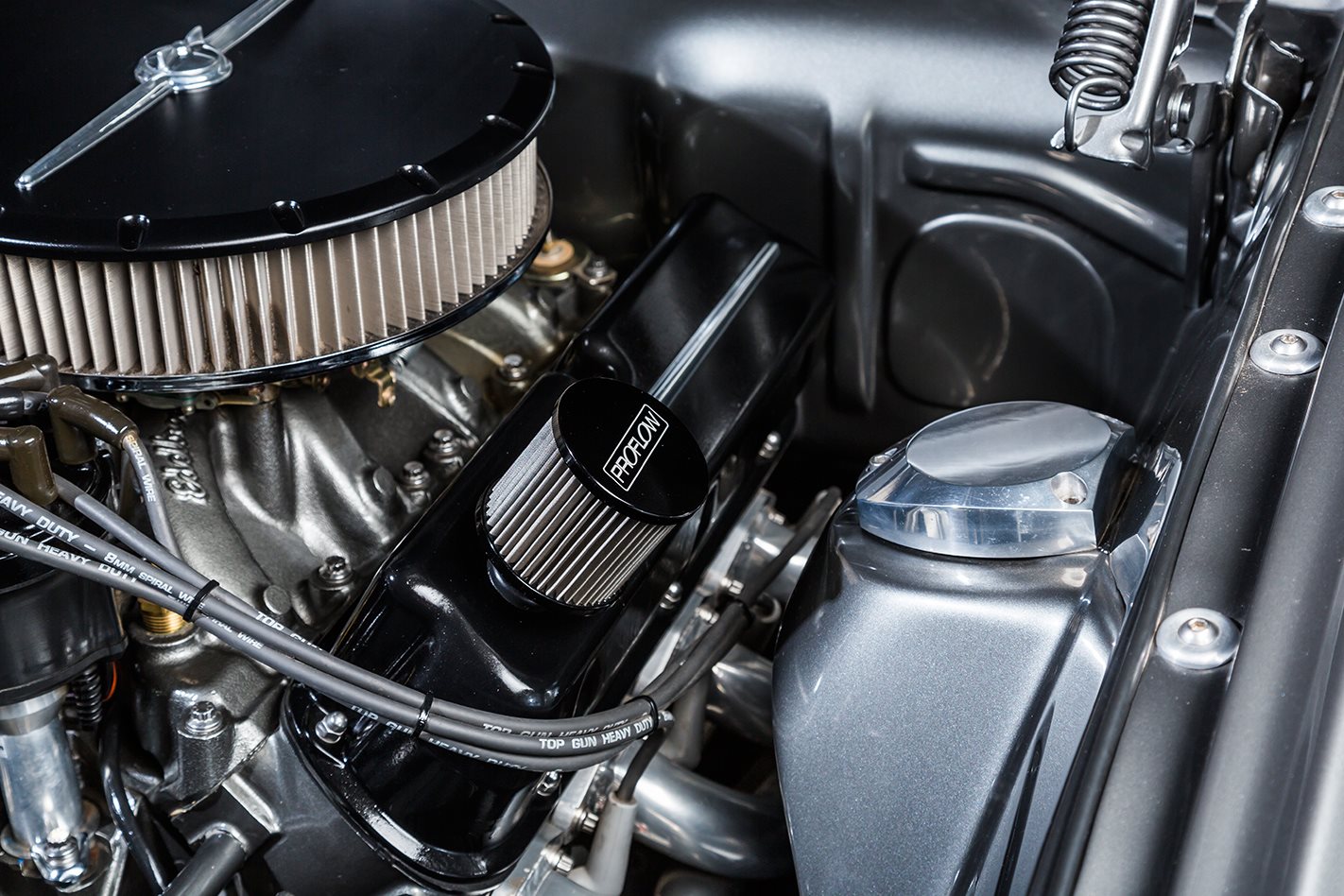 Con toiled away with the chassis work after hours for the next three years, and there was plenty of it to get through. It now sits on a three-quarter chassis with a four-link rear and QA1 coil-overs, with tubs to accommodate 285/30/20 Goodyear hoops on 20x10in Intro Twisted Vistas out back. At the pointy end there is an RRS coil-over suspension and rack-and-pinion steering set-up, with big twin-piston stoppers. Clearly the car has been built to drive. 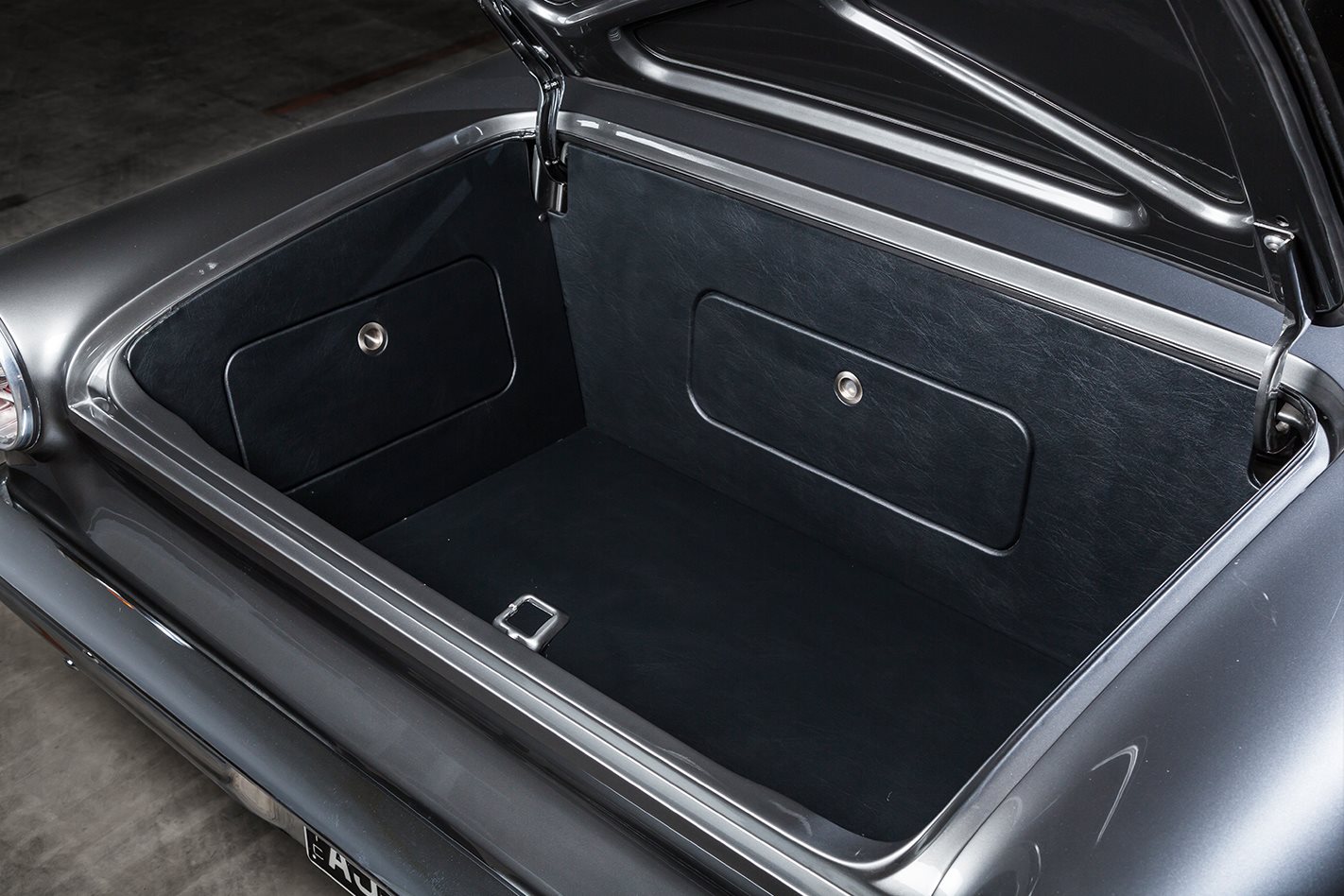 Con also notched the shock towers for the Windsor conversion, built the headers and sculpted the beautiful custom steel dash, which draws influence from the shape of the factory item and integrates nicely with the steel tops on the door trims.

“At that point I had a panic moment because it was all starting to add up,” Jason says. “My wife would ask how the car was going and I’d say: ‘No worries, I’m on budget.’ If only she knew!” 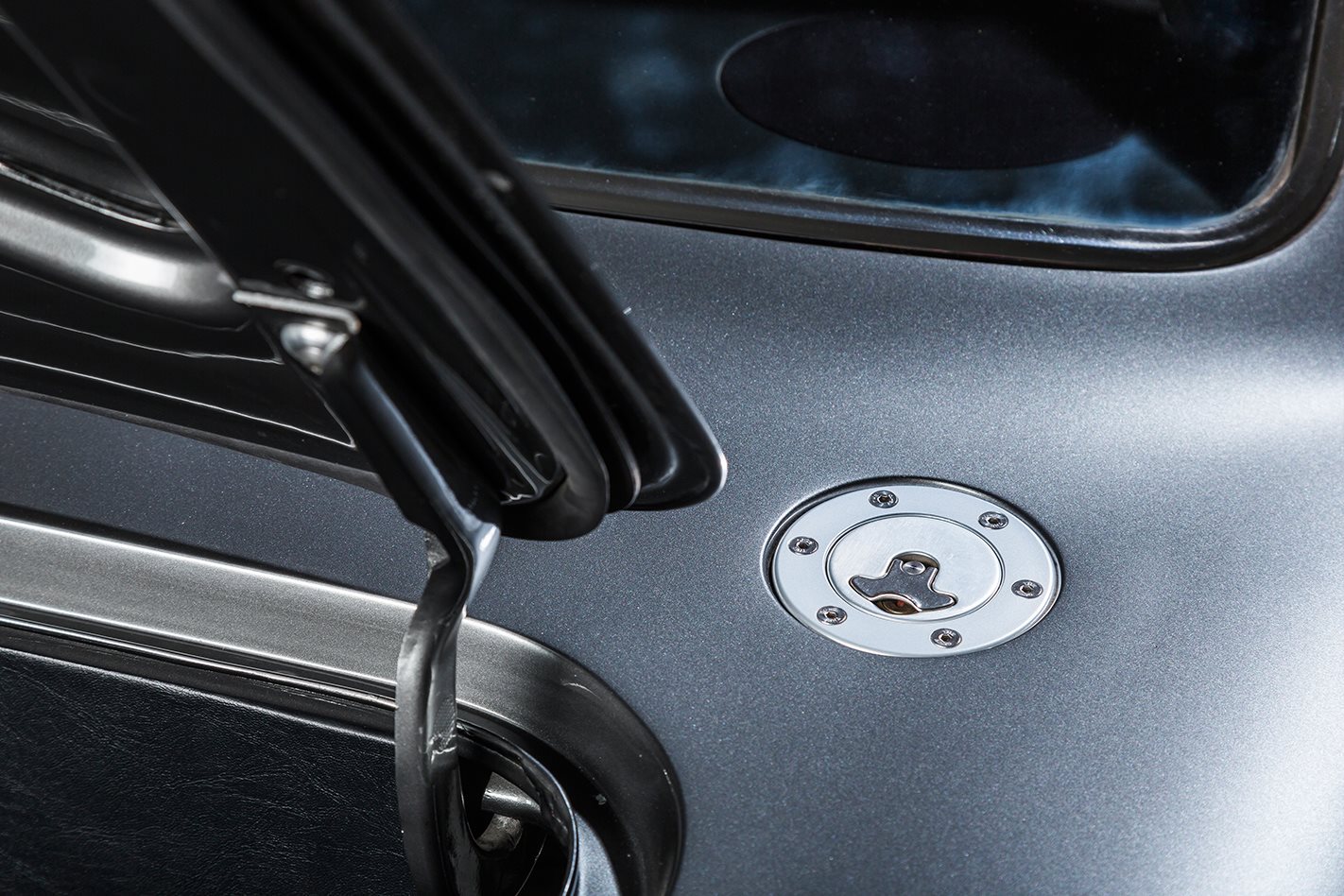 With the fab work in the bag, the next step was to have the body and paint seen to, which was a job for Joe Cundari at Cundari Bros. The results speak for themselves, but the trickiest part was choosing the colour, which Jason tells us was a six-month process! “We finally made a custom mix of metallic grey and I said to Joe: ‘That’s it! That’s the colour I want!’ The car was finally painted and it looked awesome, and I started getting excited again.” 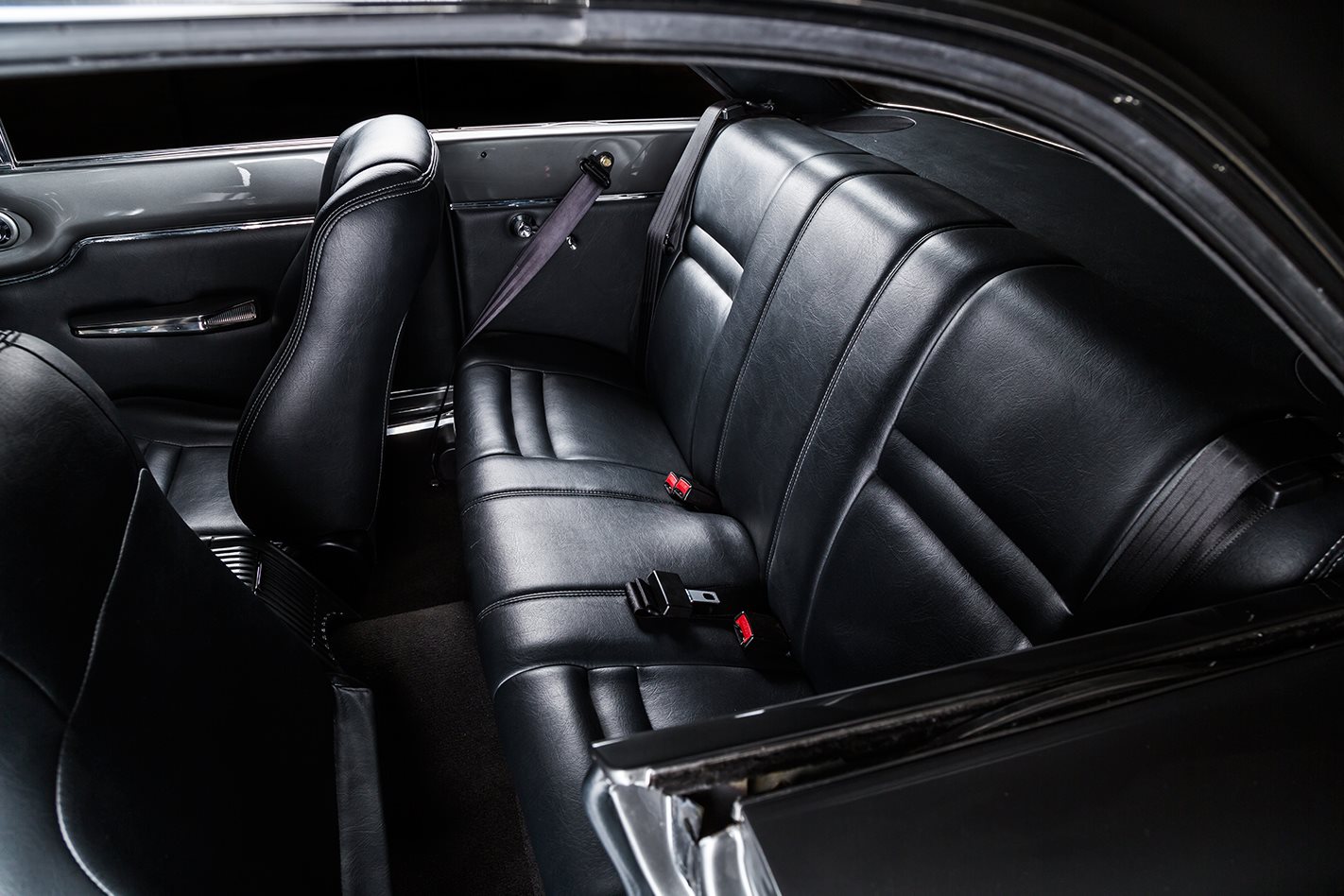 Despite the tubs, Jason was adamant the back seat be retained due to the serious family cruising time he had planned. The frame on the factory rear bench was modified to allow for the tubs and it fits an absolute treat

Meanwhile Jason had recruited his mate Peter Raditsas of East End Customs as project manager so that he could learn and benefit from his knowledge and experience. The car went out of the paint shop into Peter’s shop, where many late nights were spent with Jason’s brother Mark and mate Andy (of BLWNQ fame) assisting on the spanners to get the car assembled. 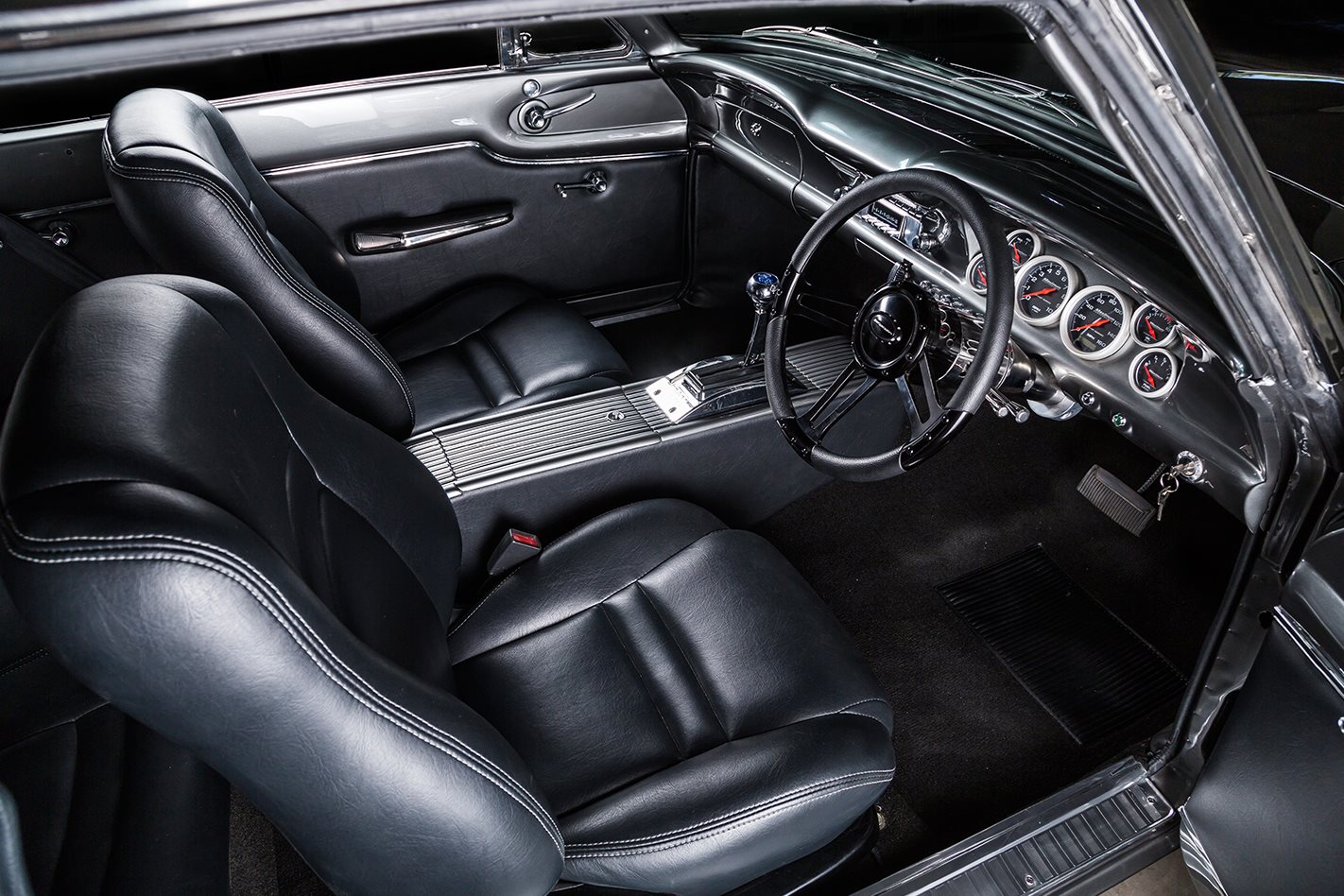 Modified Corolla front seats were used, and then the lot was retrimmed. Interior highlights include the B&M Quicksilver shifter, Ididit steering column and a custom console that was built from two factory Futura consoles

Along the way the lads decided that the little 302 Windsor wouldn’t cut the mustard, so it was switched out for a 351-cuber. Sporting Ford Motorsport heads, crank and rods, Arias pistons and a Crower solid stick, it should deliver somewhere north of 500hp – plenty for the car’s intended use. Jason has considered swapping the Edelbrock manifold and 750 Holley out for a blower and twin carbs, but right now he’s enjoying racking up plenty of road miles with the wife and kids. 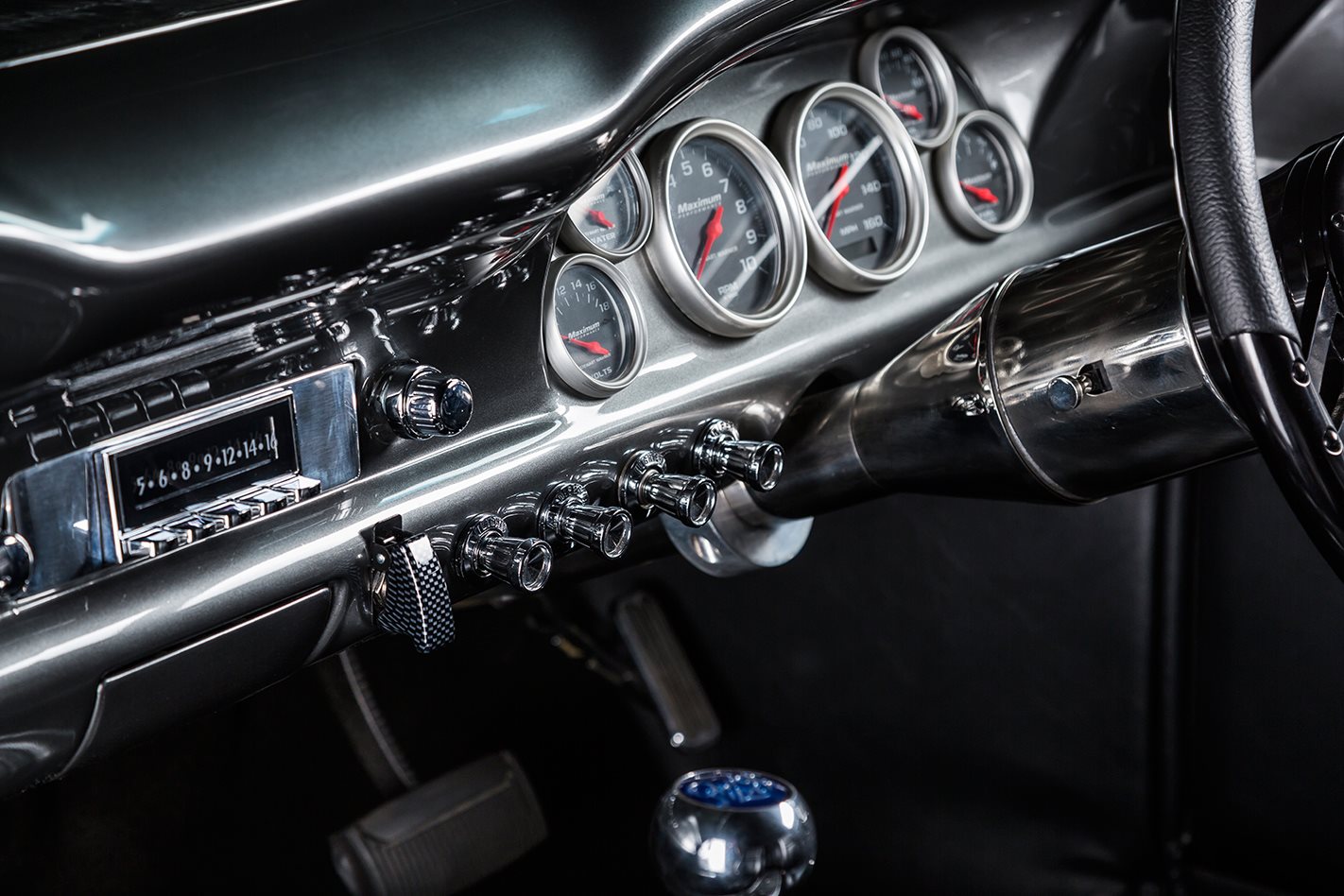 “It handles really well and it drives beautifully. The whole family really enjoys it and we probably take it out together once a week.” 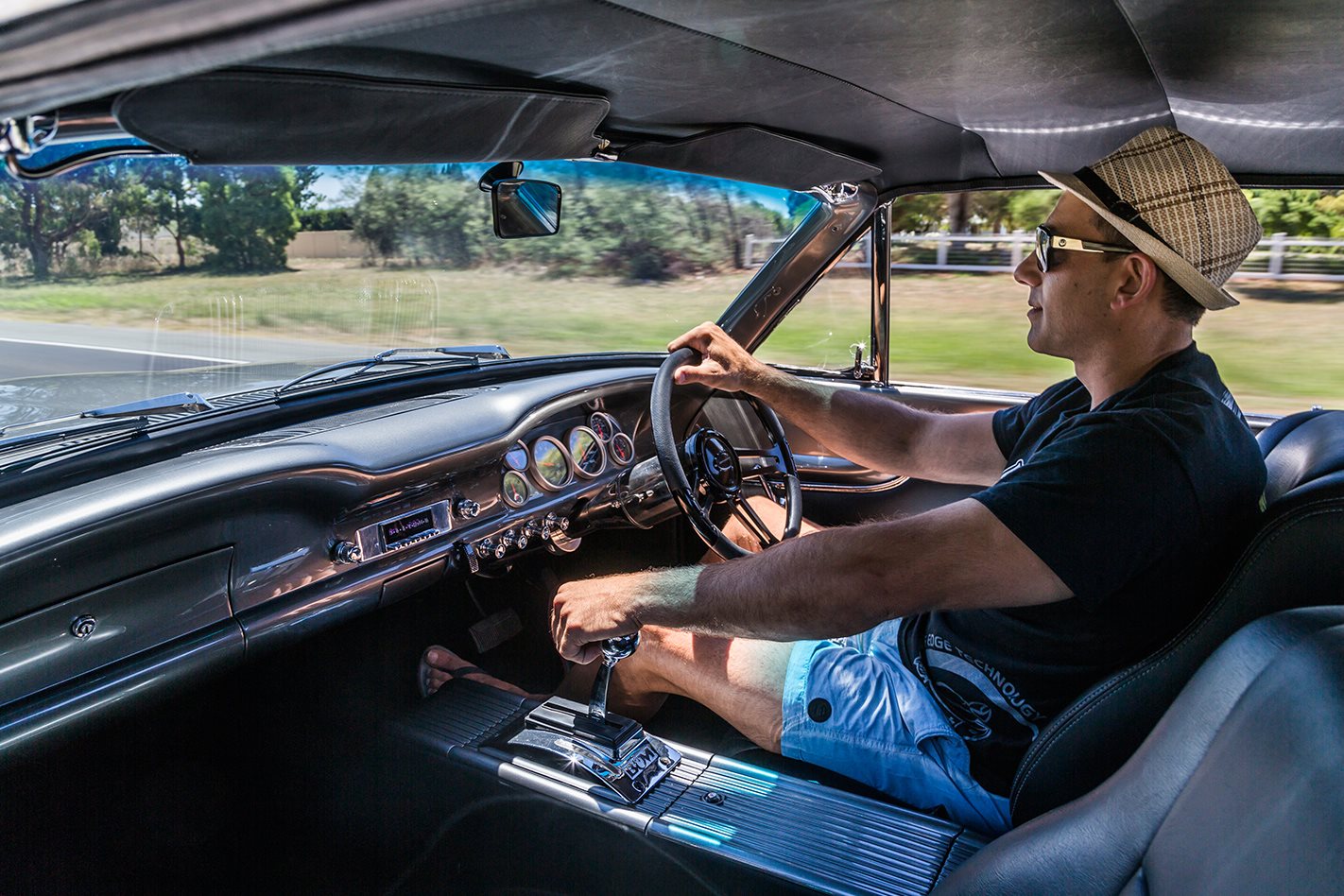 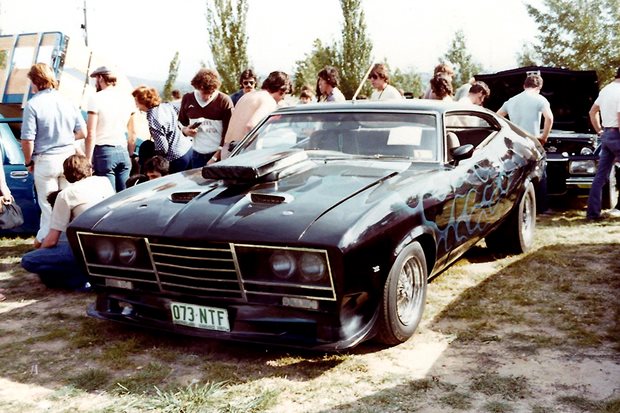 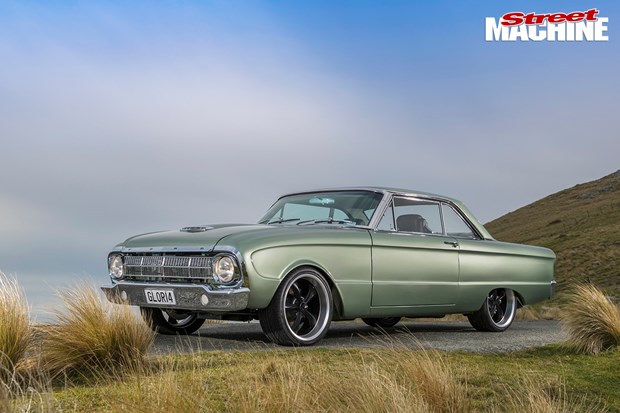 Mike Blackmore’s Boss-powered Ford XM Futura coupe hit 5.4 on the Richter scale before the engine was even installed 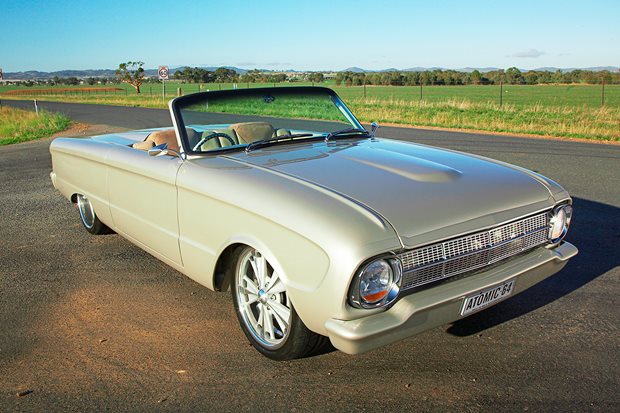