Rob Di Masullo wanted a car to tow his boat, and an early Mustang coupe is perfect for that. Isn’t it?

Good things come to those who wait. Rob Di Masullo must be the most patient man in Australia

STREET machiners are good at convincing themselves to buy or build another ride. Sometimes you just need a ute, a second family car or a ride that’ll help you get laid. Robert Di Masullo didn’t buy his ’66 Muzzy for any of those reasons; he wanted a car to tow his boat, and an early Mustang coupe is perfect for that. Isn’t it?

“That was the plan. I don’t know — it was a good idea at the time,” he laughs. “It was a 21-foot speed boat with a big-block in it. With the trailer it was 24-foot long. I got a towbar fitted. They didn’t make them for the Mustang so I had to get a special one — it cost me a fortune.” 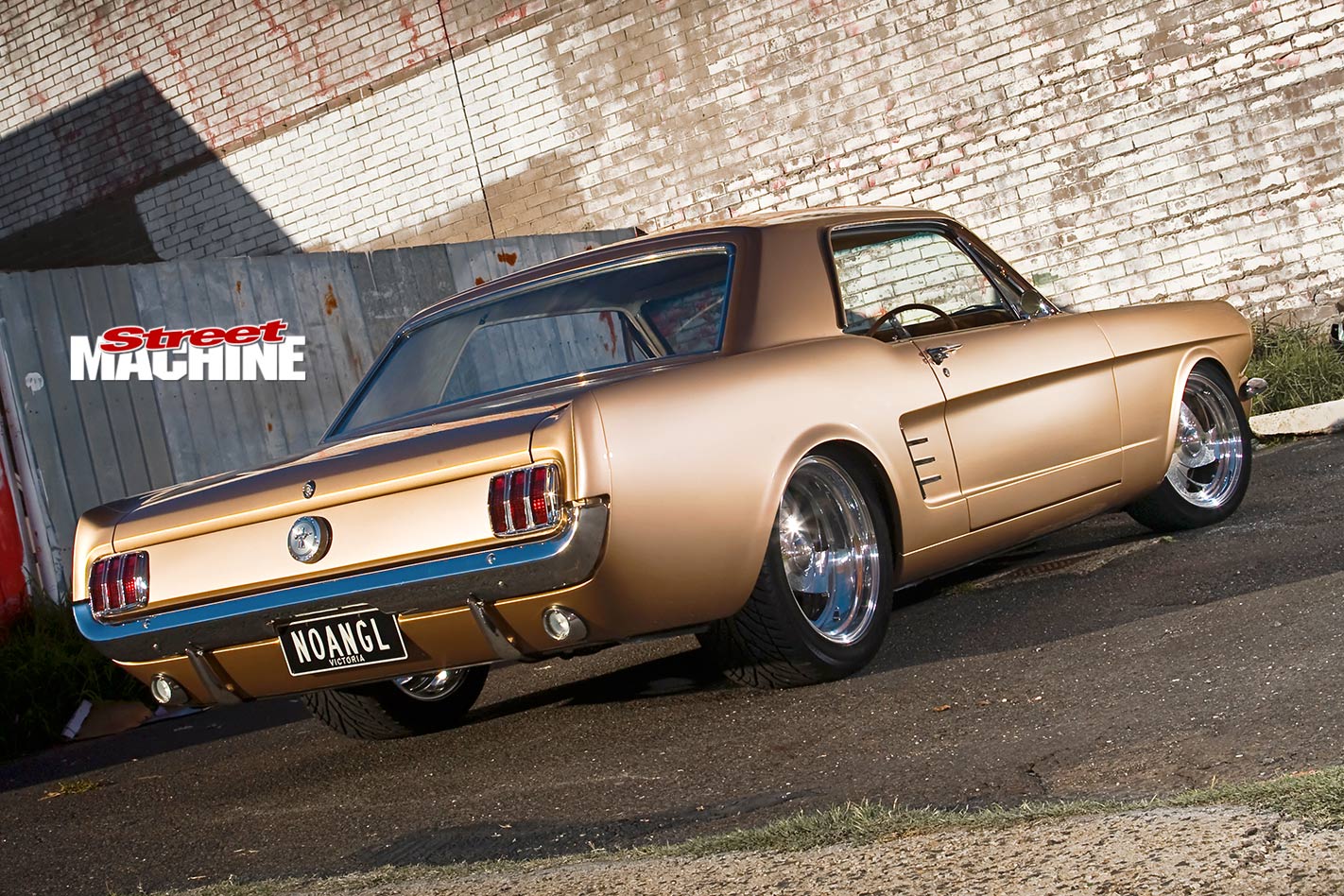 An early Mustang is only 15 feet long so the poor little pony would have looked like it was pulling the Titanic. And as for that diminutive 289 Windsor? Forget it.

“I never towed it to the ramp,” Rob admits. “I thought: ‘Stuff it! If people want to use the boat, they can tow it for me.’”

Planning to use the car immediately, he didn’t buy a shitbox. “It was clean,” he says. “The paint was a bit down but it was straight with no rust. It was already converted because in those days you couldn’t drive a left-hand drive car.” 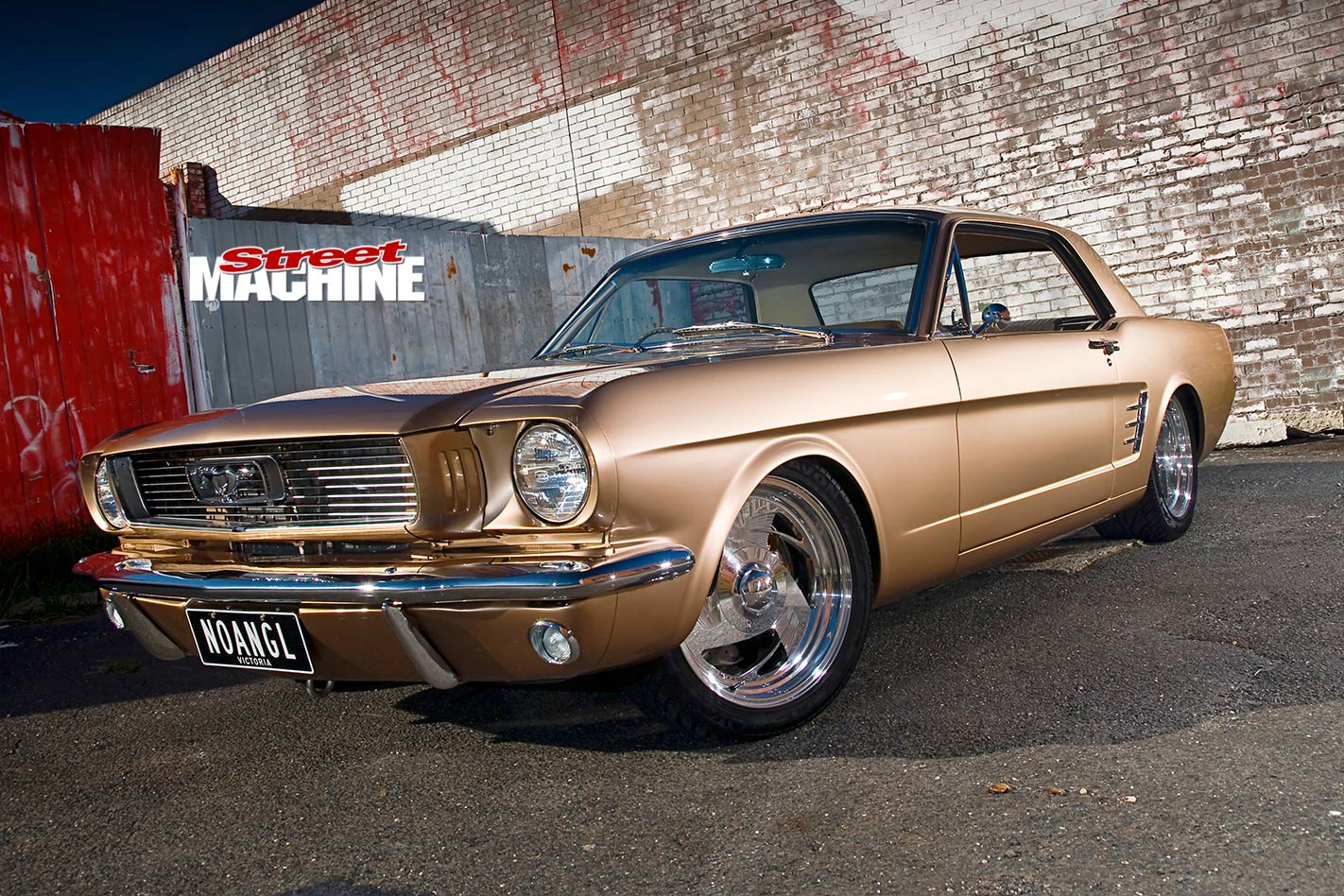 Before he bought it, a decade ago, the Muzzy had been resprayed gold. The trim was good and the car looked fine, so he just cruised in it. Until he met the dodgiest spanner-spinner in the country.

“A friend put me on to a mechanic,” Rob recalls. “I made the mistake of telling him I’d like to build a nice motor one day. Less than a week after the service, the engine blew up.”

They found what looked like a house bolt — nothing that you’d normally find inside an engine — on top of one of the pistons. 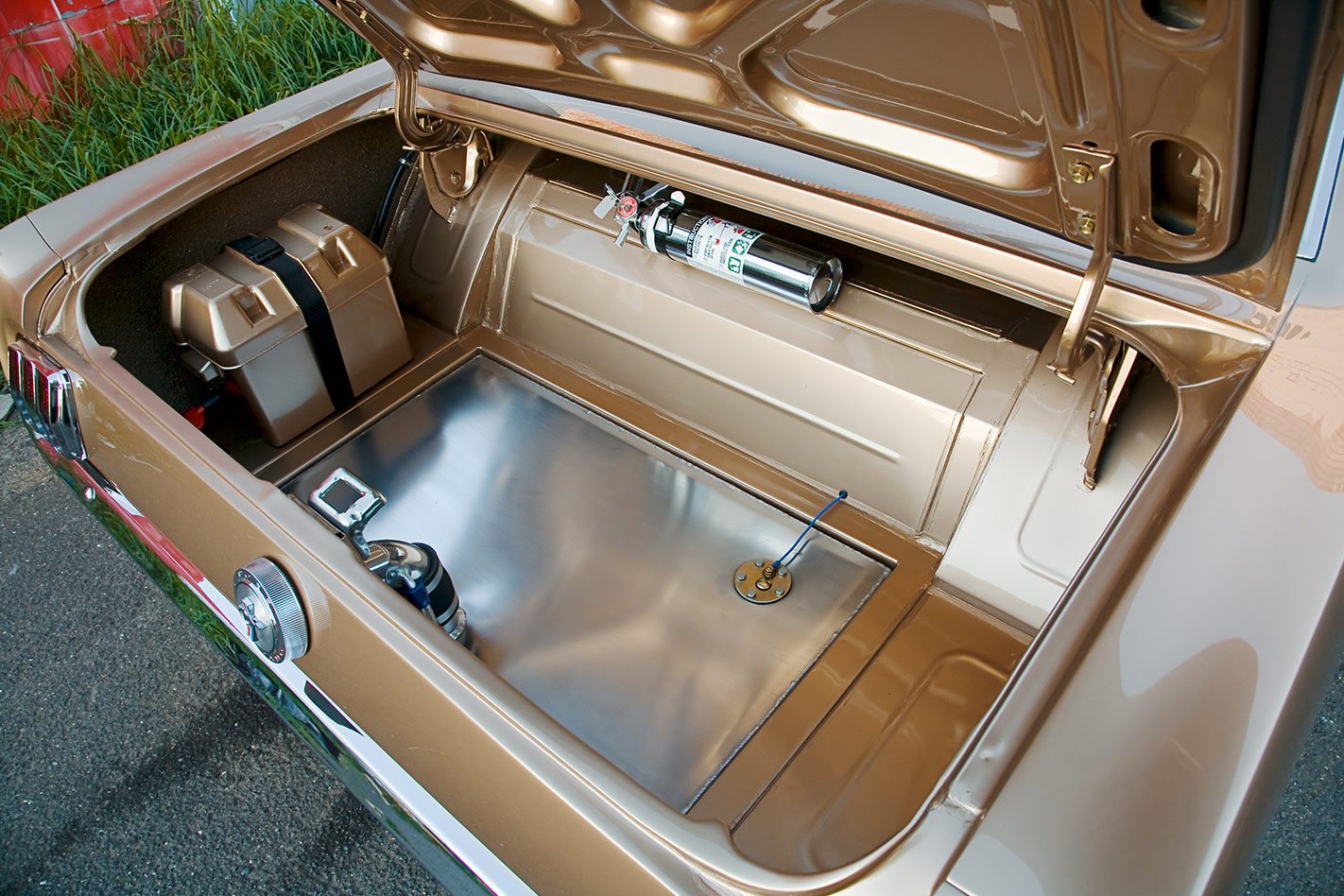 “He set me up,” Rob says. “Me not knowing, I let him build my new motor. After it was built it went backwards — the thing had no power and leaked oil and water. I spend $7000 on a lemon.”

Disheartened by it all, Rob parked the Mustang for the next five years.

“By that time I’d had my fun with the boat. I sold it and thought it was time to build the Mustang. The same friend who told me about the mechanic was a panel beater and it sat in his panel shop for two years untouched. I finally had enough, took the car back and ended our friendship!” 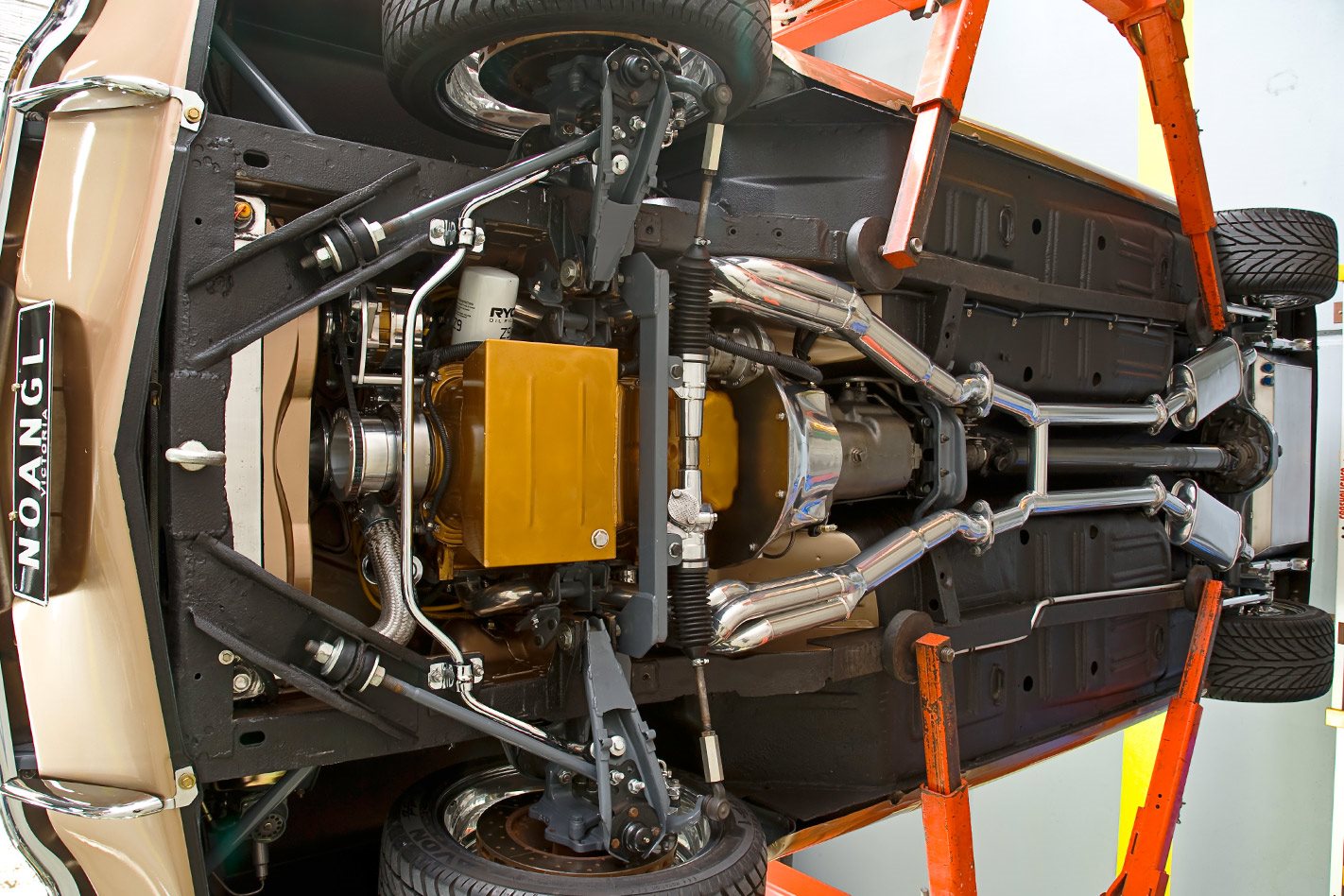 Stock Mustangs often handle like dodgy shopping trolleys. This one doesn’t, thanks to a CRS rack and pinion steering set-up mounted to a custom crossmember. The lower control arms have been boxed, with two-inch drop spindles added to get the ’Stang closer to earth without compromising suspension travel

Luckily Rob’s brother-in-law, Luci, was just opening a panel shop (F1 Panels) so he shipped it there. Keeping it all in the family, Rob scored some much-needed help stripping the car to bare metal to get it ready.

“My mother used the paint stripper when I was working during the day. I’d say: ‘Can you strip this?’ and she’d do a little bit of work for me. So yeah, she stripped the car,” Rob laughs. “The car was in bare metal for four years, then we just gave it a light sandblast and off we went.” 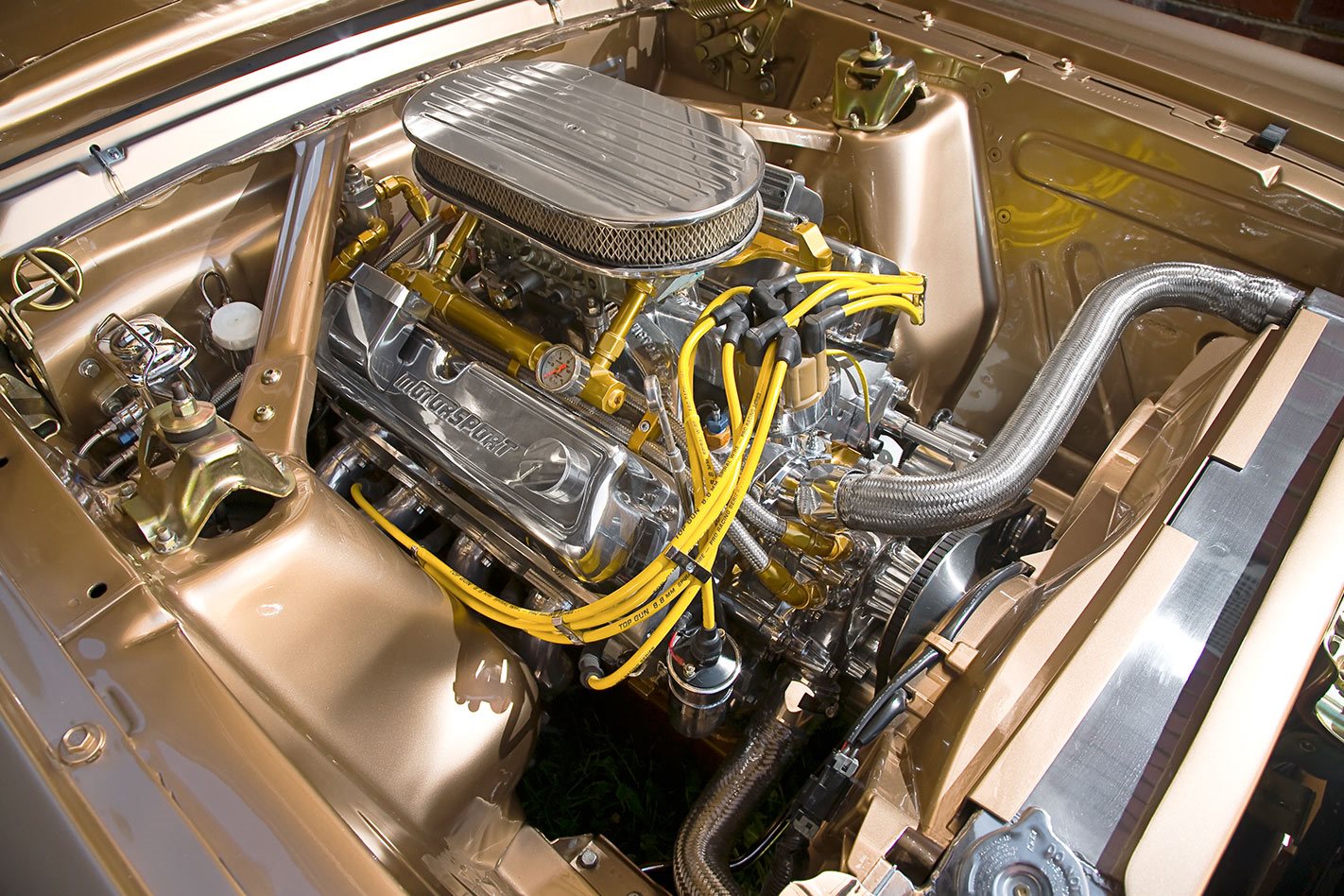 The factory 289 is still there but now it’s filled with enough gear to deliver 347 cubes and 450hp. It has also been beautifully detailed, with judicious use of braided line and anodised fittings. Large custom radiator with neatly shrouded thermos keeps things cool

How about that colour choice? It suits the period of the car and it’s easy to imagine it’s a factory Mustang hue, though it isn’t.

A mate had owned a similar Mustang. Luci resprayed that car in custom Fool’s Gold and while Rob thought the colour was terrific, he didn’t want to copy his mate’s ride.

“But after a while he sold his car, and that’s when I changed my mind. So I knew what the car was going to look like before it was painted. I wanted a colour that’s never going to go out of date. It suits that sort of era. 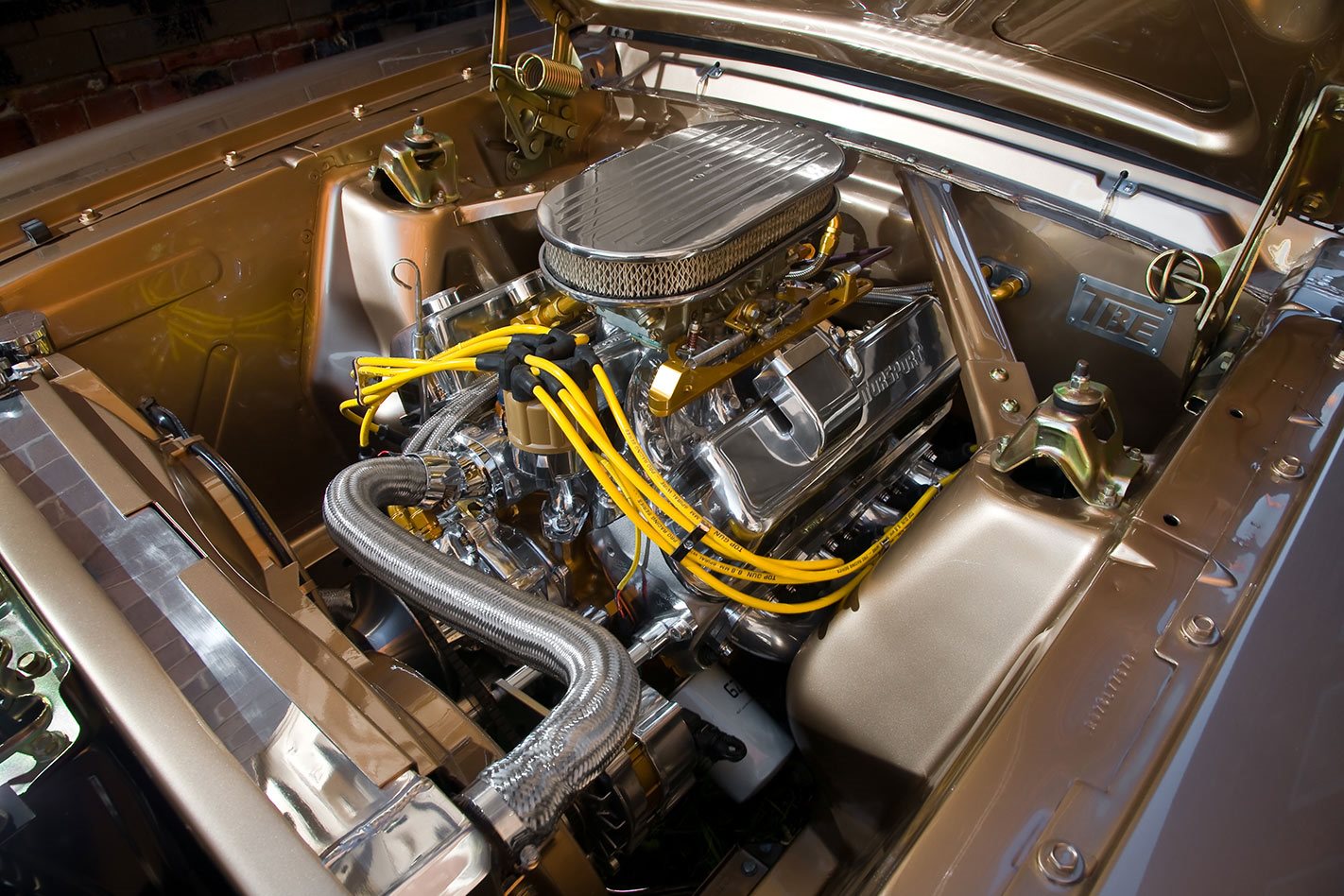 “I really like the parchment interior, and I wanted a colour that would work well with that,” he adds.

The parchment Pony Trim is repro stuff sourced in the US and after Reservoir Motor Trimmers did its work, the inside was as classy as the outside.

Pony Trim was a factory option, with a trio of galloping horses embossed into the seats. But this wasn’t a drop-in job. With the suspension and tub work that’d been carried out in the back, the rear squab had to be slimmed down. Rob had the angle changed too so the seat isn’t so upright. 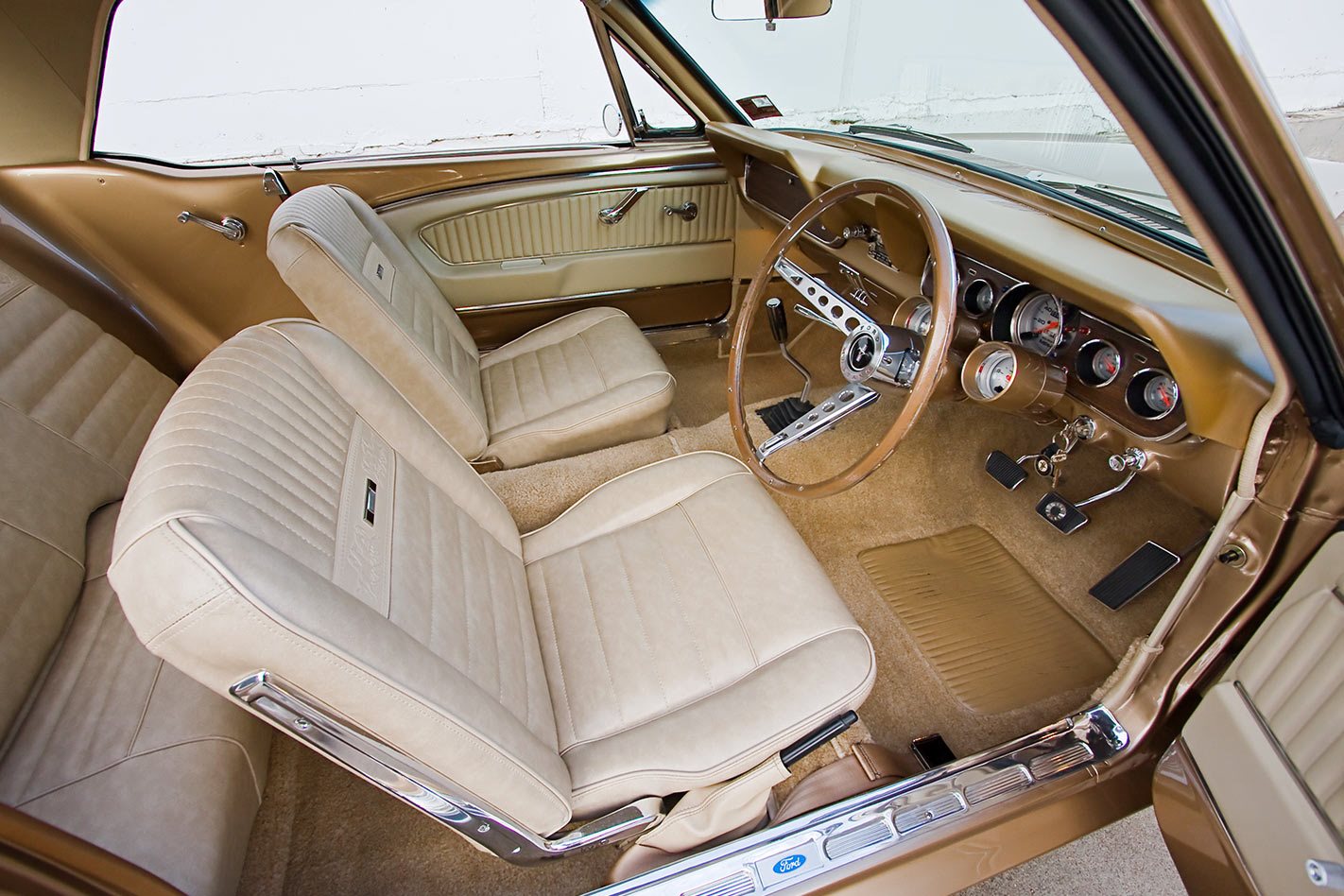 At first he wasn’t planning to tub the car at all but with the project taking longer than expected he had some spare dollars. “I thought I’d like to put some rubber under there, so I got it done.”

With wheel tubs and a four-link kit, there was room for a slab of rubber, so on went a pair of 9.5in-wide billets, and with the bodywork sitting several inches closer to terra firma she’s a mean looking bit of gear.

But you can’t have a car like this with an anaemic little 289 under the bonnet — especially one that’s had a less than stellar history, so Rob kept the block and tossed everything else. 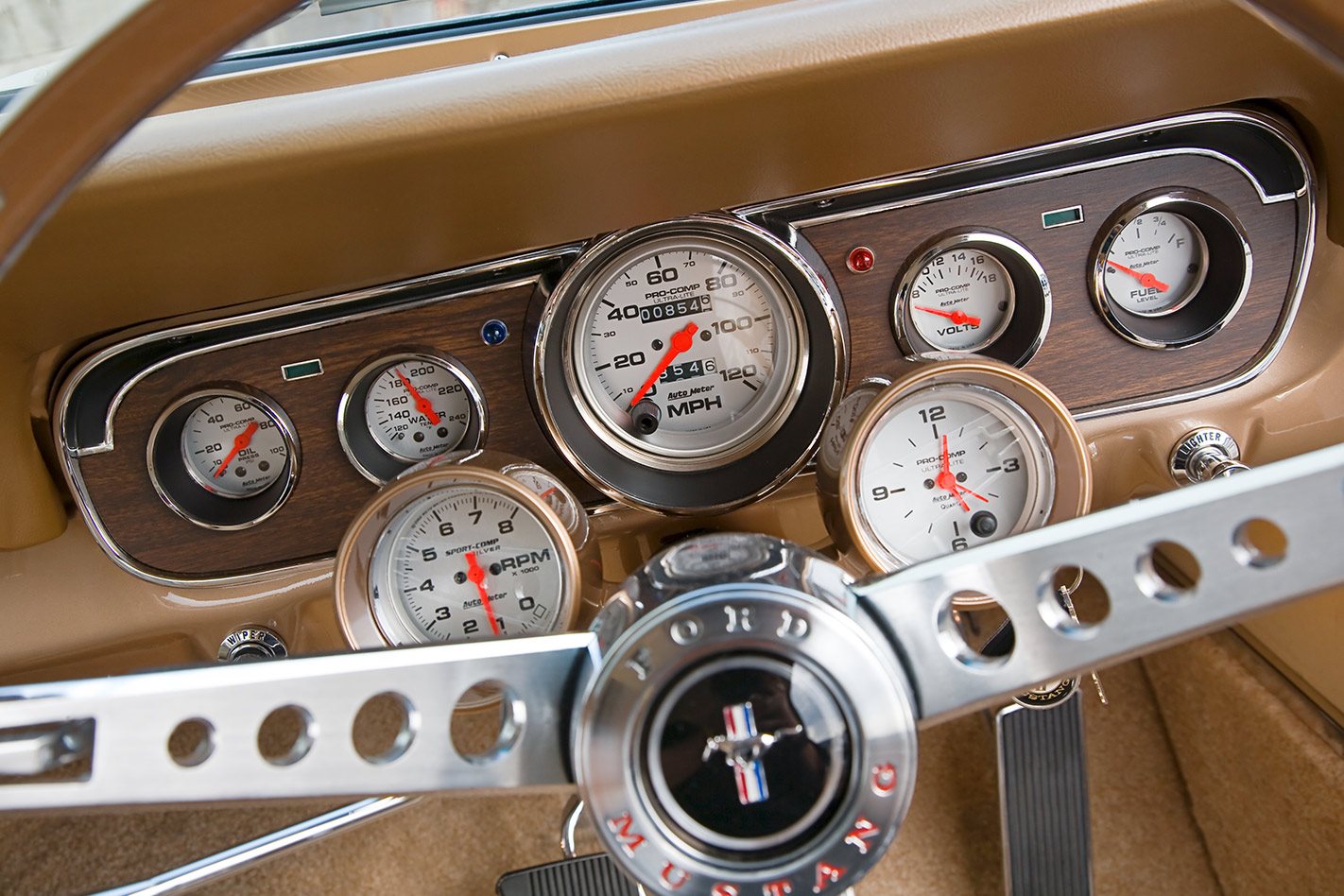 Hanging a monster tacho off the A-pillar wouldn’t have suited the theme of this car. Instead, Rob fitted white-face Auto Meters into the original facia, and added a couple more into retro-style pods painted body colour and strapped to the steering column for that factory look

Milad from Milmotive filled it with a Scat 347ci stroker crank, with some clearancing at the base of the bores, and a set of H-beam rods. Super-tough SRP pistons, Edelbrock heads and a high-lift Crower solid cam complete the package. Rob reckons it should be good for around 450 horses — plenty for a cool streeter.

With that kind of power, you’d want the steering and brakes beefed up and Rob’s done that too, fitting a CRS rack and pinion set-up and much-improved stoppers all ’round.

Best thing is, it never gets hot thanks to a custom radiator that fills all the space between the chassis rails, and a pair of AU-spec thermo fans to keep the air flowing. 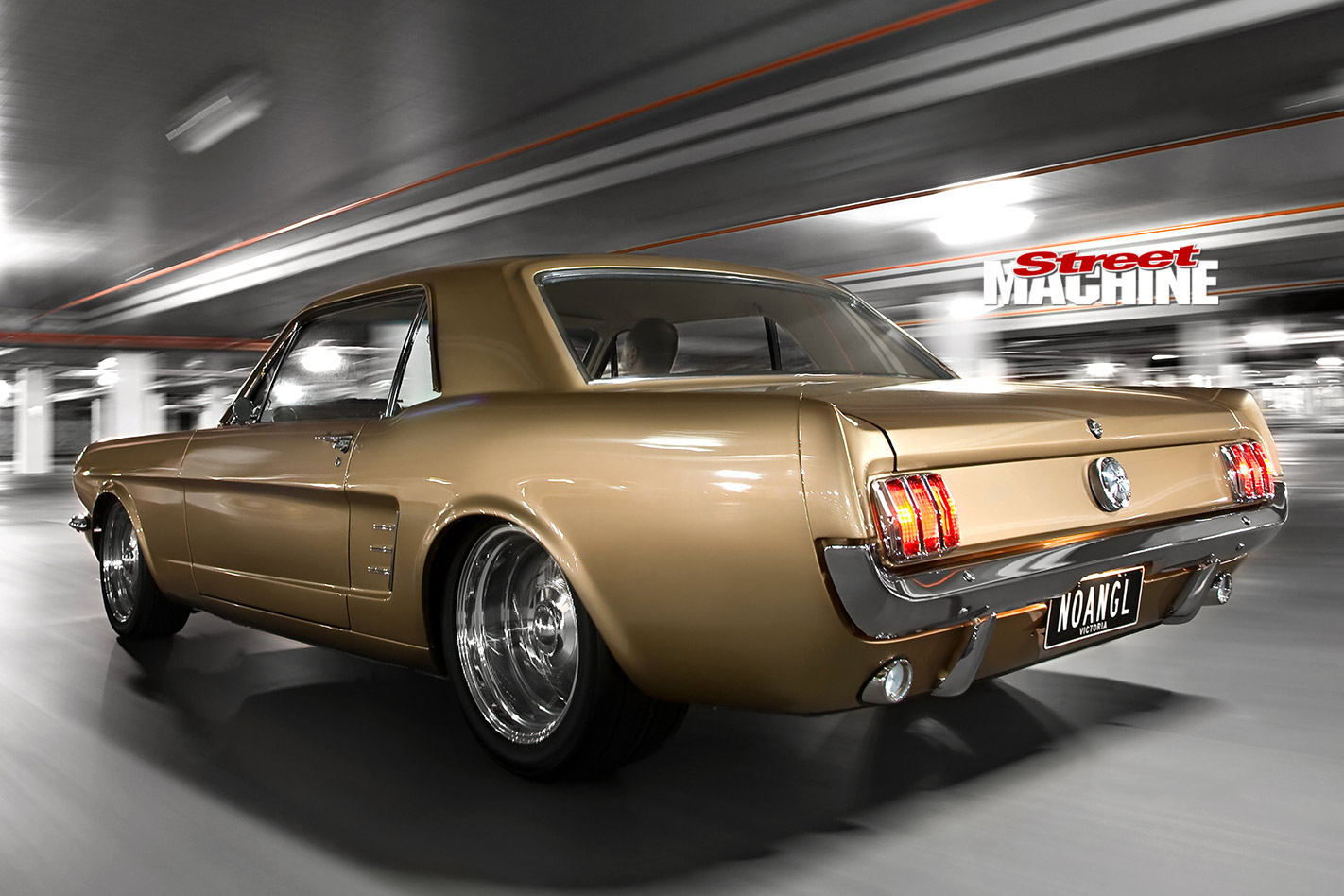 “When it gets to 180, the fans come on,” Rob says. “She climbs to 190 but then she just drops to 150. It doesn’t matter how hot the day is. I know a lot of people who have built street machines and had a lot of trouble with the cooling.”

We’ve seen plenty of that too, but Rob’s got it well sorted, which is tops. Because let’s face it, there’s no point having a car you can’t drive every day of the year.