In the hopeful, prosperous times shortly following World War II, Preston Tucker (Jeff Bridges) is an innovative backyard engineer looking to build a car to match a freshly optimistic America. Working out of his home barn with a motley team of family and employees, Tucker is bankrolled into an assembly plant by New York financier Abe Karatz (Landau), who must instigate some frenemy moves to tame the outlandish Tucker’s business model if the latter’s dream is to become reality. Most notably, Karatz understands the heavy ties between politics and the motor industry, which he navigates by appointing a CEO, Robert Bennington (Goodman) – a fictional composite of multiple real-life Tucker board members – and legitimate political liaison Senator Homer Ferguson (played by Jeff Bridges’s screen-legend dad, Lloyd). 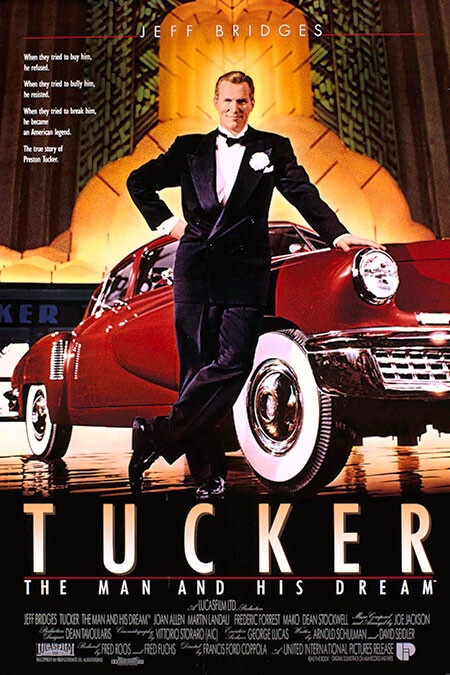 The move backfires when the narrow-minded Bennington and Ferguson firstly reject then overturn Tucker’s ability to manufacture his dream car. Tucker’s outspoken personality and the underlying fear in the motor industry of his forward-thinking ideas leads to a number of insurmountable roadblocks and pitfalls thrown in his path.

It is soon apparent that Bennington and Ferguson are merely puppets for higher powers, and industry fear-mongering along with trumped-up charges quash Tucker’s dream after only 51 vehicles are produced.

Jeff Bridges’s performance as Preston Tucker gets top billing from me, on a par with his portrayal of Bad Blake in Crazy Heart. He resonates an intensity and passion in this role that mirrors what I’d learnt of the real Preston Tucker prior to viewing this film, and is ably supported by the Oscar-winning Martin Landau, along with then-new faces Joan Allen as Tucker’s wife Vera, and a personal fave, the ever-adaptable Elias Koteas, as legendary automotive stylist and Cord designer Alex Tremulis.

I enjoyed the 1940s junkyard visit – which was no doubt difficult to populate with appropriate tin even back in ’88 – and the collection of Tuckers used for the assembly line and courthouse scenes. Although a handful of replicas for the film were based on Studebakers and pre-war Fords, original Tuckers in myriad colours were sought to more accurately represent just how close the Preston Tucker dream came to becoming reality.

Tucker has you hooked from start to finish, with great acting, an upbeat soundtrack and a cleverly filmed vintage feel. The documentary aspect of this film left me feeling a little saddened for the plight of the real-life Tucker, and a bit pissed at the absolute slaughter he copped from industry giants and their political allies. Ironically, the Big Three incorporated many of his revolutionary safety ideas in the ensuing years.

Action:
The Tucker reliability trial features some thrills and spills, while two police officers on Harleys chasing down the 120mph-capable turret vehicle is a good laugh.

Plot:
An upbeat, inventive dreamer takes on the might of the American car industry in an attempt to build ‘the car of tomorrow’.