Some builders keep their cars subtle to avoid unwanted attention. Not Chris Baldacchino

SOME cars just get under your skin. Sydneysider Chris Baldacchino is only 31 but he’s already owned this VL Calais for 14 years. Despite building a raft of other cool custom vehicles, including Geminis, Honda Civics and other Commodores, Chris’s VL has not only survived the automotive revolving door but has just completed a seven-year revamp.

“When I bought the VL, it was a silver and white Calais, totally stock,” he says. “At the time I just needed transport and drove it around like that for months before doing anything at all to it.” 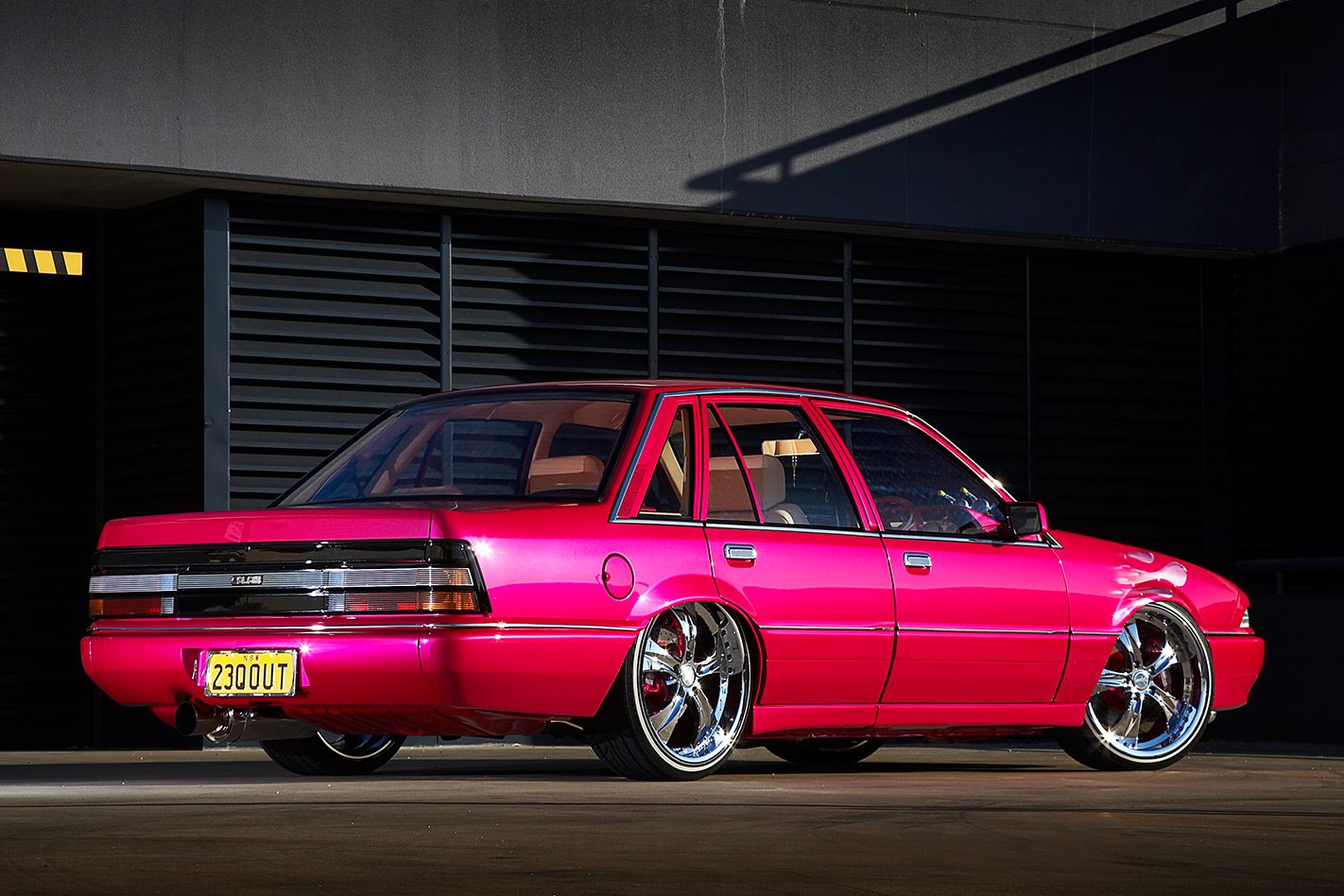 A panel beater and spray painter at the time, Chris grew up in a car-mad family. His dad has always loved the rumble of a healthy V8 and his brother was already working in the body trade by the time Chris started thinking about his future.

“My old man is 65 and just had his VK Commodore featured in a magazine! He had a Torana SL/R 5000 for 20 years before that. My brother’s a painter. I saw him getting into custom cars and followed in his footsteps.”

Although Chris has since hung up his spray gun for a career in the transport industry, you can bet it didn’t take long for the young revhead to hit his new VL with some custom colour.

Even then, cruising under the radar didn’t interest Chris in the slightest and he went for a bright shade of pink. 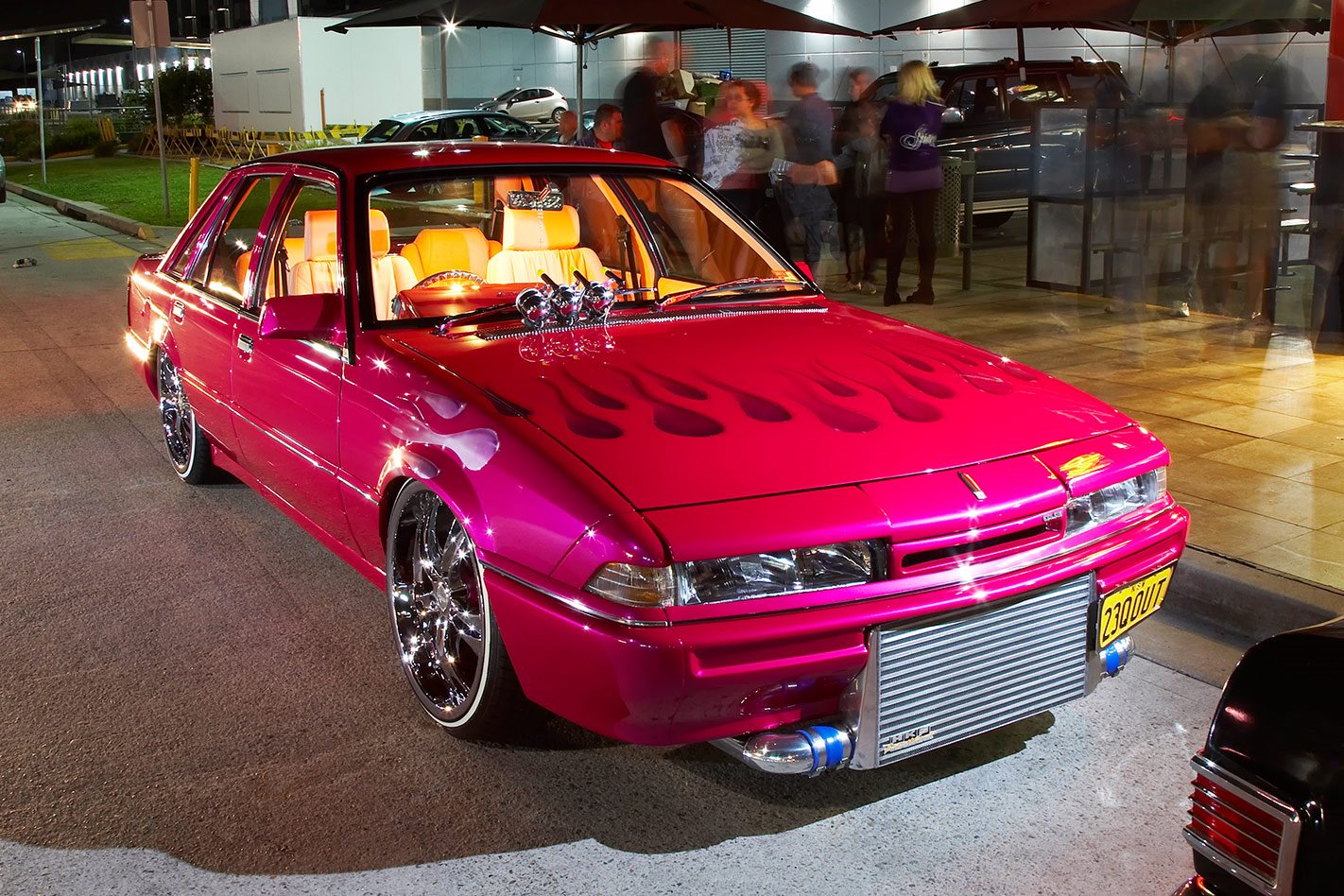 “I stripped it down and applied a stand-out colour. Before long it was painted, had custom trim and some motor work. I drove it like that every single day for about five years and was pretty well-known by the local cops. I got sick of being harassed. It was just defect after defect — they didn’t care what the engineer’s certificate said.”

After appearing in a few magazines with his first version of the Calais, Chris took it off the road for a thorough rebuild.

“I wanted to make the car one of the best going around,” he says. “From the start I intended to do the undercarriage and really go all out. I didn’t think it would take seven years, though.” 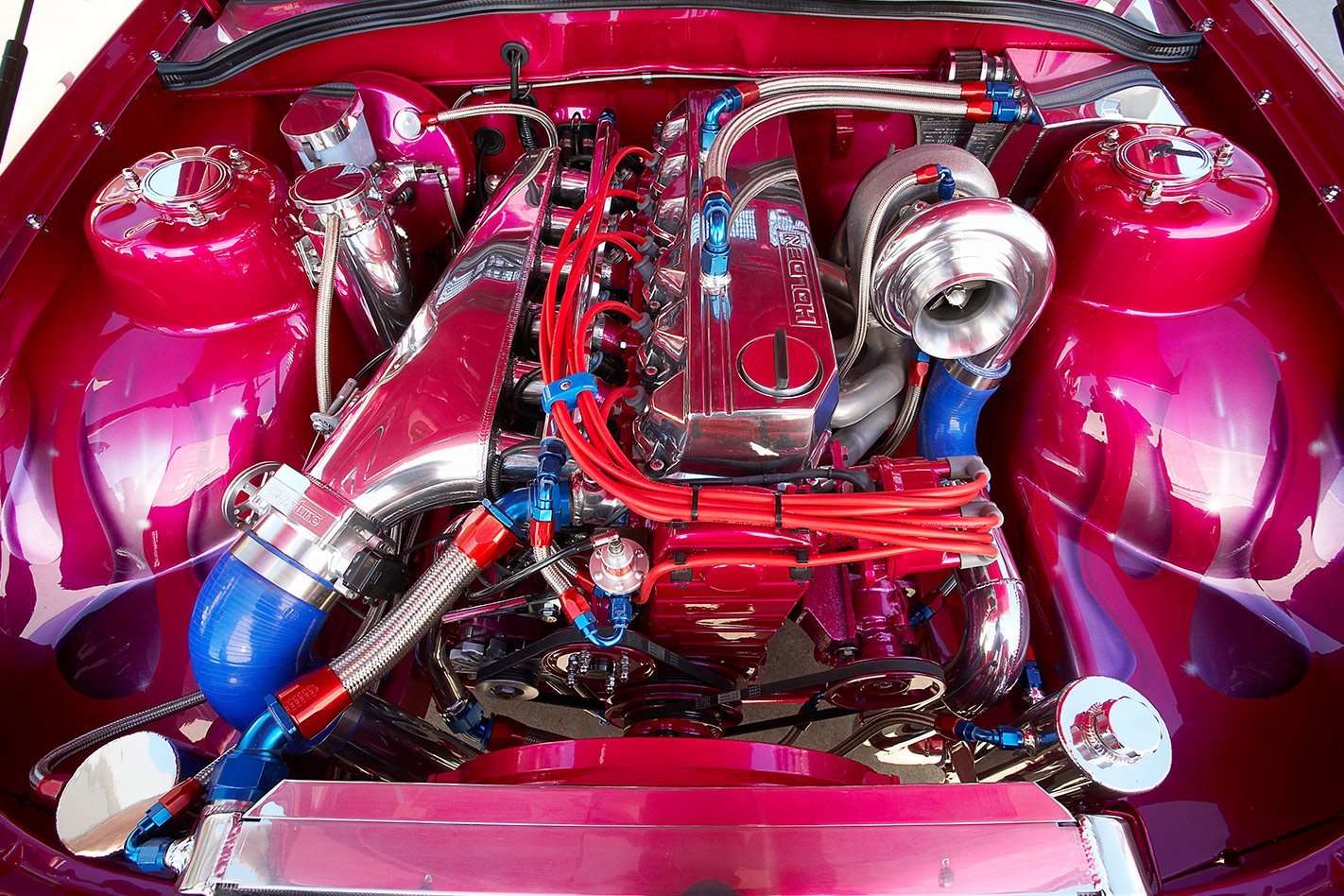 Currently pushing 15psi, the rebuilt RB30DET is still running in; expect 500rwhp with 22psi from the Garrett T04ZR once the final tune is dialled in. All paint and panel work, including the smoothed and flamed engine bay, is Chris’s handiwork

The first step was a trip to the sandblaster, where the entire shell was taken back to bare metal. Happily, that metal was in good shape, only needing a few minor repairs, leaving Chris free to concentrate on making the finish mirror-smooth.

It was a bold choice the first time around and Chris decided to keep the VL pink, only this time every last dark corner would be coated.

“It’s a totally different shade than before — this one is much brighter,” he says. “The undercarriage was a nightmare. Preparing the floor pan and getting it ready for paint was horrible — it nearly wrecked my back, working on the car on a hoist.” 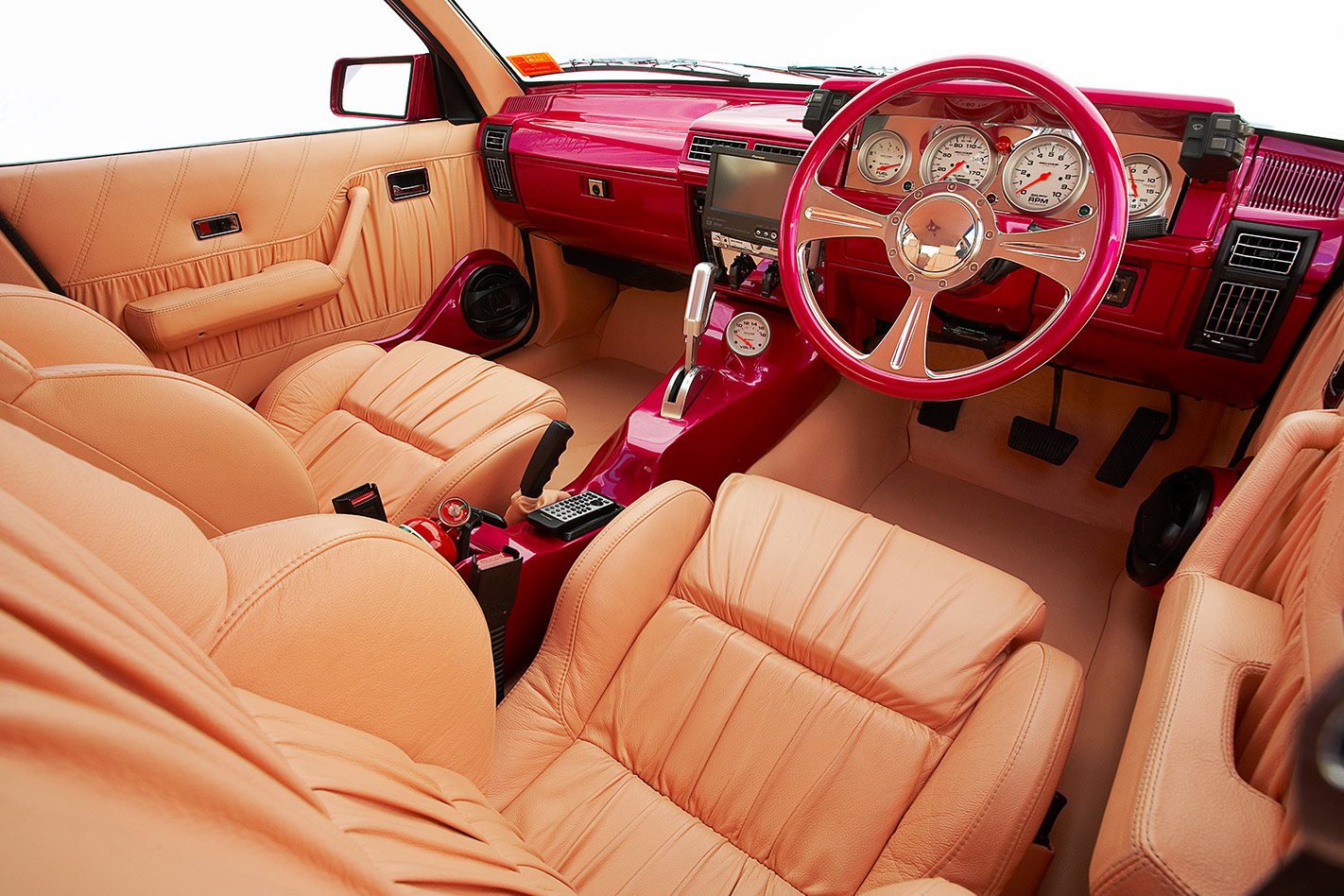 Despite extensive mods inside, there’s enough VL DNA to let you know where you’re sitting. Two pairs of VR GTS bucket seats are separated by a full-length custom console

He used almost 18 litres of custom pink pearl in the process of refinishing the car and it’s everywhere, including the cabin, where the VL dash and custom full-length centre console are covered in it. Whatever couldn’t be painted is covered in peach leather and the cabin features a ton of custom touches, such as two pairs of VR GTS buckets, gathered leather door trims and leather-covered false floor panels.

While he was working on the visual elements of the build, he sent the engine and driveline off for some attention. The original RB30DET was retained and the bottom end reassembled using largely factory parts, save for a set of JE forged pistons. 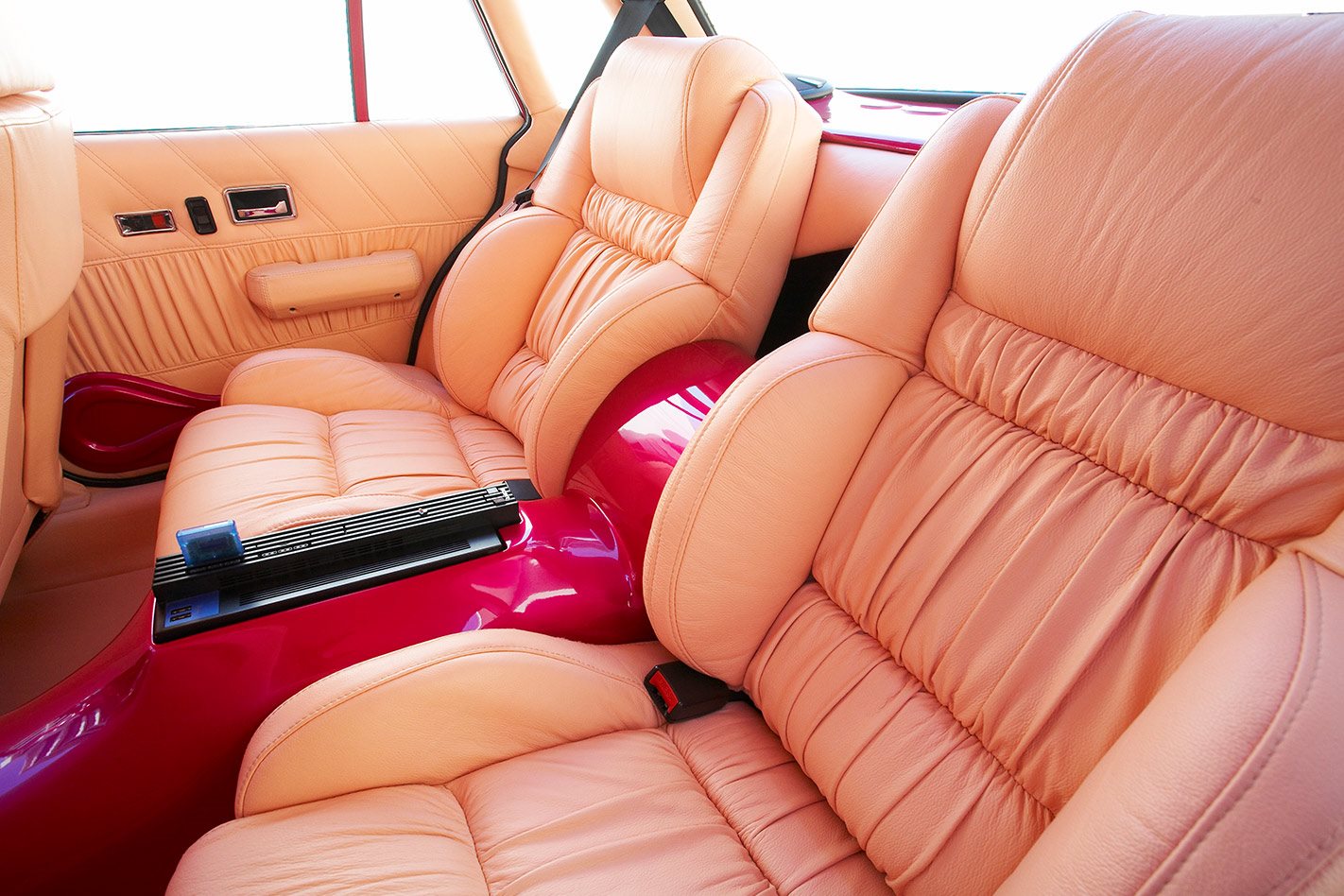 “The head, crank and rods are standard. There’s not much to do on these engines to get them to make power.”

Two areas that do need attention are the intake set-up and the fuel system. Chris’s combo features a T04ZR turbo that hangs on a Five Racing exhaust manifold and huffs into a custom intake manifold through a 100mm billet throttlebody.

On the fuel side you’ll find a Walbro 400 in-tank pump, big injectors and a Sard regulator, with the spark controlled by a Microtech ECU. “It’s expected to make 500rwhp on 22psi. Right now I’m running it in on about 15psi. 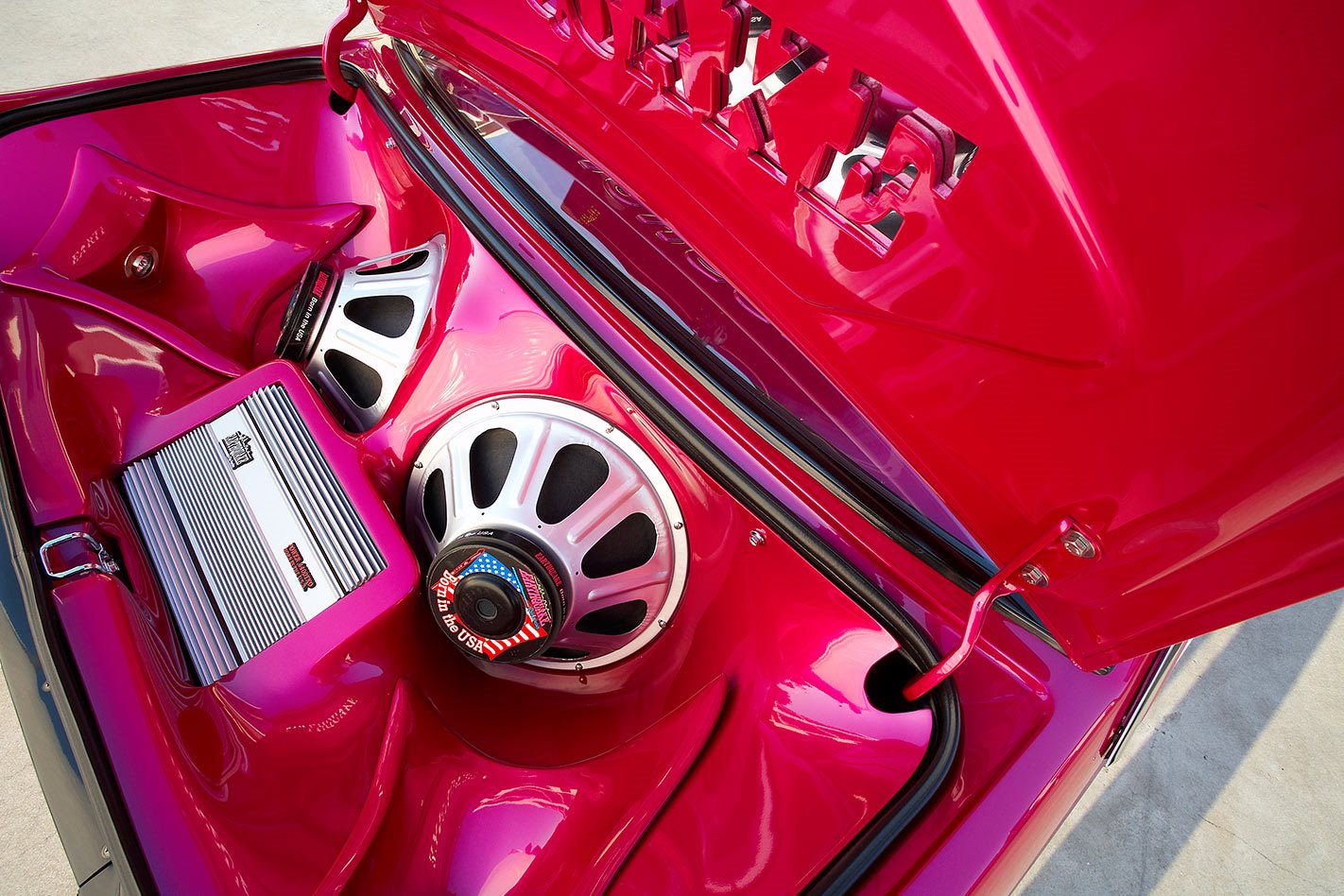 Measuring 15in each, the two Earthquake subs live up to their name. Housed in a swoopy fibreglass enclosure with a matching 1000W power amp, there’s no room for the shopping

“Seeing the car come together was amazing. It took months to get it back in one piece — I’d just work on it after hours, whenever I got a chance. Sometimes it would sit for weeks with nothing happening. That’s why it took seven years to finish.”

And now that it’s done? “I’ll probably show it for 12 months and after that I can start to enjoy it — take it to Powercruise, things like that. The amount of the work I’ve done under the car, I’m just not ready to wreck that yet!”

After seven years, you’d forgive Chris for taking a rest but he’s already thinking about his next project.

“It’ll be an SL/R 5000. I intend to follow in my old man’s footsteps. It’ll be something crazy, blown and tubbed, through the bonnet and all that.” 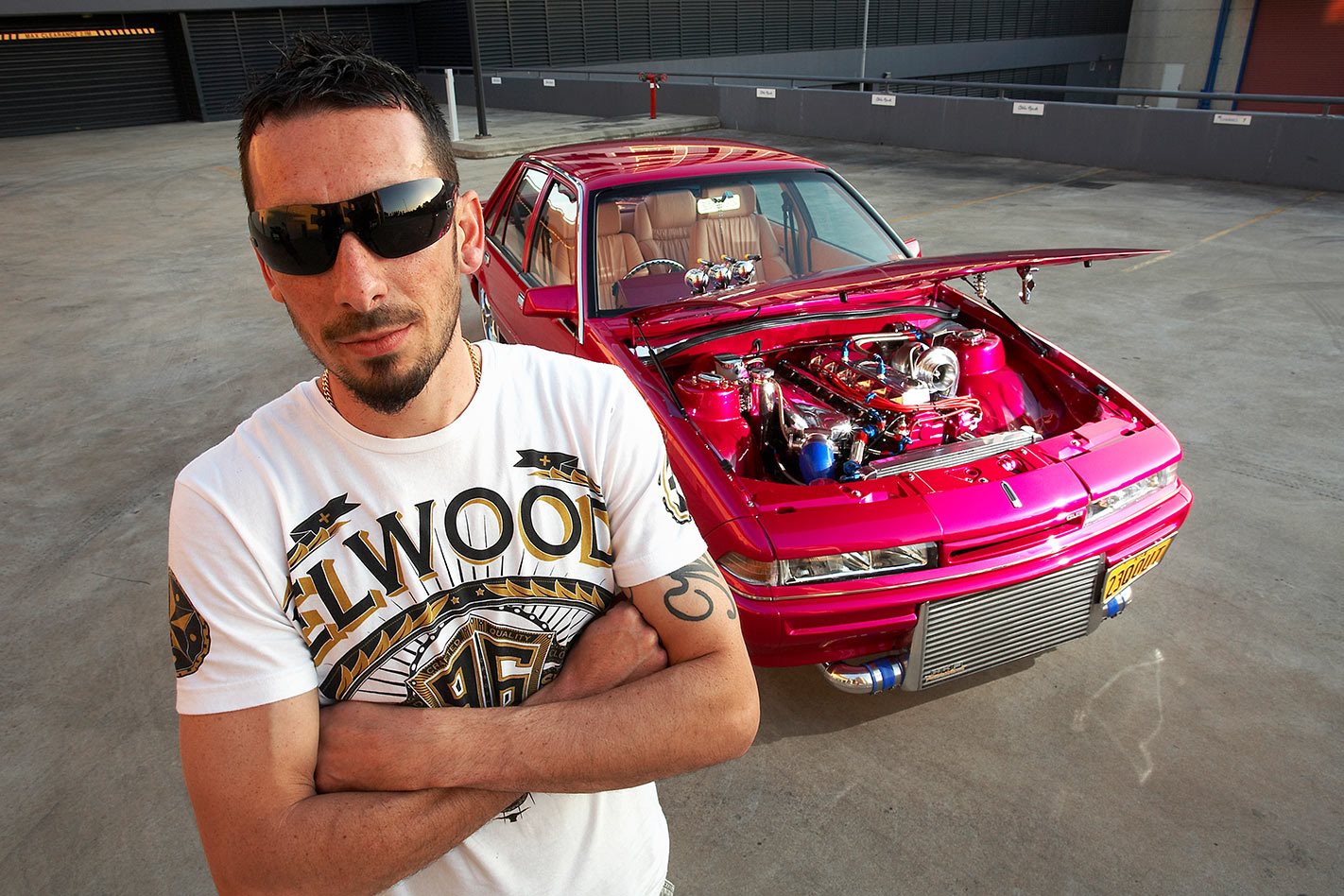