THE TEAM at Castle Hill Exhaust & Performance is well-known in Sydney for tuning late-model performance cars, particularly LS-powered machinery. But when the clock hits 5pm, CHE&P tuners David Keys, Dale Heiler, Chris Turner and Martin Freeland turn their attention to a workshop toy which is anything but a game.

Their turbocharged Impulse Blue VT Commodore is an example of years of development and has recently run a personal best of 7.5 seconds. A far cry from its humble beginnings. “The car was picked up for $500 unregistered and with minor accident damage,” says Dale. “It was purchased for the purpose of building a drag car.”

It now boasts a three-quarter chassis housing a turbocharged 436-cube LSX V8 that pegged their chassis dyno at 1200hp and is estimated to make more like 1600hp!

CHE straightened out the $500 dunger's shell then had the rear door handles and the fuel filler flap shaved. Once the body was coated in Holden Impulse Blue, a VX HSV GTO bodykit and custom rear wing were added

Manley crank, conrods and pistons with Clevite main bearings comprise the reciprocating assembly. A custom hydraulic roller cam works 7/16 moly pushrods. The heads are Higgins CNC units featuring huge LS7 valves, Morel tie-bar lifters and Pac dual valve springs. This is a long motor that can flow serious air, which is a good thing considering the gigantic GT55 Garrett turbo hanging off the front! It’s mounted on a CHE custom exhaust manifold, along with the 4.5-inch exhaust blasting out the side, all treated by Hi Octane Coatings to keep heat in the pipes and out of engine bay.

Motorsport Connections supplied Australian-made Speedflow fittings and hoses, which are used exclusively throughout the car. MSCN also supplied all the safety gear including parachutes, race suits, helmets and accessories

Serious air requires serious fuel and the VT drinks a rude amount of E85 via an Aeromotive mechanical pump and 16 ID2000 injectors. The oiling system is a custom dry sump set-up, with a fabricated oil pan and huge external Moroso pump. Aussie-made Speedflow aero fittings and hoses are used throughout.

As a Haltech dealer, the CHE VT’s engine management is also all Australian. The core ingredient is a Haltech PS2000 ECU working with a Street-8 CDI ignition unit to provide spark, a CAN wide-band sensor keeping an eye on the air-fuel ratio and two four-channel Exhaust Gas Temp sensors.

The electronics are rounded out with the Racepak logger dash and Smart Wire system, while the job of sorting out the copper spaghetti fell to Justin Stark of Ultimate Conversion Wiring who Dale says did a fantastic job.

It adds up to serious power, with the VT maxing out the CHE dyno at 1200hp through the 33x16.5-inch Mickey Thompsons. “Going by weight, ET and mile-per-hour it had to be making around 1600hp as it was,” says Dave Keys. “We should be squeezing a few hundred more with the new set-up, edging up to 200mph and 2000hp.”

Yes, the boys have recently made some significant changes. The intake has been changed from the single-plane LSX unit with an Edelbrock elbow to a Holley hi-ram intake, custom fitted with 16 injector bosses. The water-to-air intercooler has also been ditched for a much lighter air-to-air front-mounted assembly.

Interior comprises a single Kirkey seat for Dale, B&M shifter, five-point harness, Racepak digital dash and one serious rollcage. Hi Octane Coatings was responsible for all powder and heat coating throughout the VT

“The intercooler was costing us a lot of weight,” Dave says. “The unit itself was 35kg, plus the weight of the ice when you fill it.” The new set-up saves a whopping 45kg.

The other major upgrade is the Precision PT118 CEA turbocharger replacing the Garrett GT55. It is a massive 118mm-wheeled unit capable of flowing up to 2800hp. CEA stands for Competition Engineered Aerodynamics and brings with it a 2618-grade aluminium compressor wheel sitting behind the seven-inch radiused inlet.

A Powerglide by Al’s Race Glides and custom torque convertor handle shifting duties. A four-inch tailshaft drives a nine-inch assembled by Craft Differentials featuring a Mark Williams centre and fully floating 40-spline axles. It’s a no fuss unit that has handled a heap of abuse and years on the strip.

“Finding time was the hardest aspect of the build, as the majority of it was done in-house here at Castle Hill Performance,” says Dale. “We've run a best of 7.56 at 184mph so far, which was our goal when we started. The car has plenty more in it and shows a lot of potential. Ultimately we have set the benchmark higher and would like to see low seven-sec ETs and over 190mph in the near future.

“We have almost finished a sister car to this Commodore. The new car is a VT sedan, sprayed the same colour, but has a standard chassis with IRS. It is a full-weight street car and the goal is to run high eights, street registered. It has a 408-cube LQ9 truck engine with GT55 turbo, which had run 8.20 at 170mph in the drag car.”

While it’s a race car through and through, the RX3’s stance is magic. The lightweight dual-bead-locked Weld Alumastar wheels are spindle-mounted on the front and give the small coupe a real wedge profile, especially with super-fat 315/66-15 rubber under its bum

Sydney is a hotbed of drag rotaries and almost 40 years of R&D means there is a wealth of info knocking about the harbour city on how to make them fly. Nathan Farrugia and Terry Androutsos, however, took a different direction with their 1973 Mazda RX3 when the drag bug bit.

“The car has been owned by Nathan and Terry for years,” says Dave Keys of Castle Hill Exhaust & Performance. “As a street car it had a 20B peripheral-port rotary to start with and then a turbo 20B. The boys ditched that in favour of the LSX to put together something different to race in Outlaw Radial.”

That LSX is a rip-snorting 427-cube monster, making an estimated 1600 horsepower after it maxed out CHE’s dyno at the 1200hp mark. It’s all about jamming as much air as possible into as large an engine as possible because, as Dave says, “You struggle to over-turbo a V8.”

That’s a good thing because the Mazda wears a pair of huge Garrett GTX4788 full-frame turbochargers sitting behind the headlights, pumping the boost into a towering front-mounted air-to-air intercooler. This didn’t leave room for the radiator, which is mounted under the boot floor.

Such massive power-adders mean the rest of the package has to swallow bulk air. To this end, a Shaun’s Custom Alloy inlet manifold sits up top, feeding air into a pair of deep-breathing LS7 heads, worked over by the legendary Tony Knight at Knight Engine Services in SA. They’ve been kitted out with Pac dual valve springs and super-strong Morel tie-bar lifters that work off 5/16 moly pushrods.

The X in the GTX47 refers to the Garrett turbocharger’s new-age billet ball-bearing core, which is claimed to offer lower friction for less drag and heat build-up

The bottom-end has been upgraded to match, with a Manley crank, Mahle pistons, Clevite bearings and Oliver con rods, capped with a custom sheetmetal sump and Moroso external oil pump. It’s a serious set-up that is designed to hang together as the boys aim the combo deep into the sevens at over 200mph.

Like the Commodore, the RX3 drinks E85 and lots of it, supplied by twin Aeromotive Pro Series pumps and 16 ID2000 injectors tapped into the inlet manifold. Engine management is via the same all-Haltech package as the VT. Custom exhaust manifolds and four-inch dump pipes round out a package so tough that CHE had to fit a two-speed Rossler Turbo Glide from Al’s Race Glides to handle it. It’s topped and tailed by a ProTorque convertor and custom four-inch driveshaft, with a much narrowed Ford nine-inch rocking 40-spline axles. Which is where they struck a problem.

“On its first launch the LSX combo bent the diff housing like a banana,” Dave says. “From there the rear-end was set up by James at Grooveryder Fabrications and it works spot on now.”

With the rear end sorted, Nathan’s new mission is to keep the custom coil-over strut front-end on the ground. There is awesome YouTube footage of the coupe carrying the front wheels almost the length of the strip back at the May APSA meet at WSID. 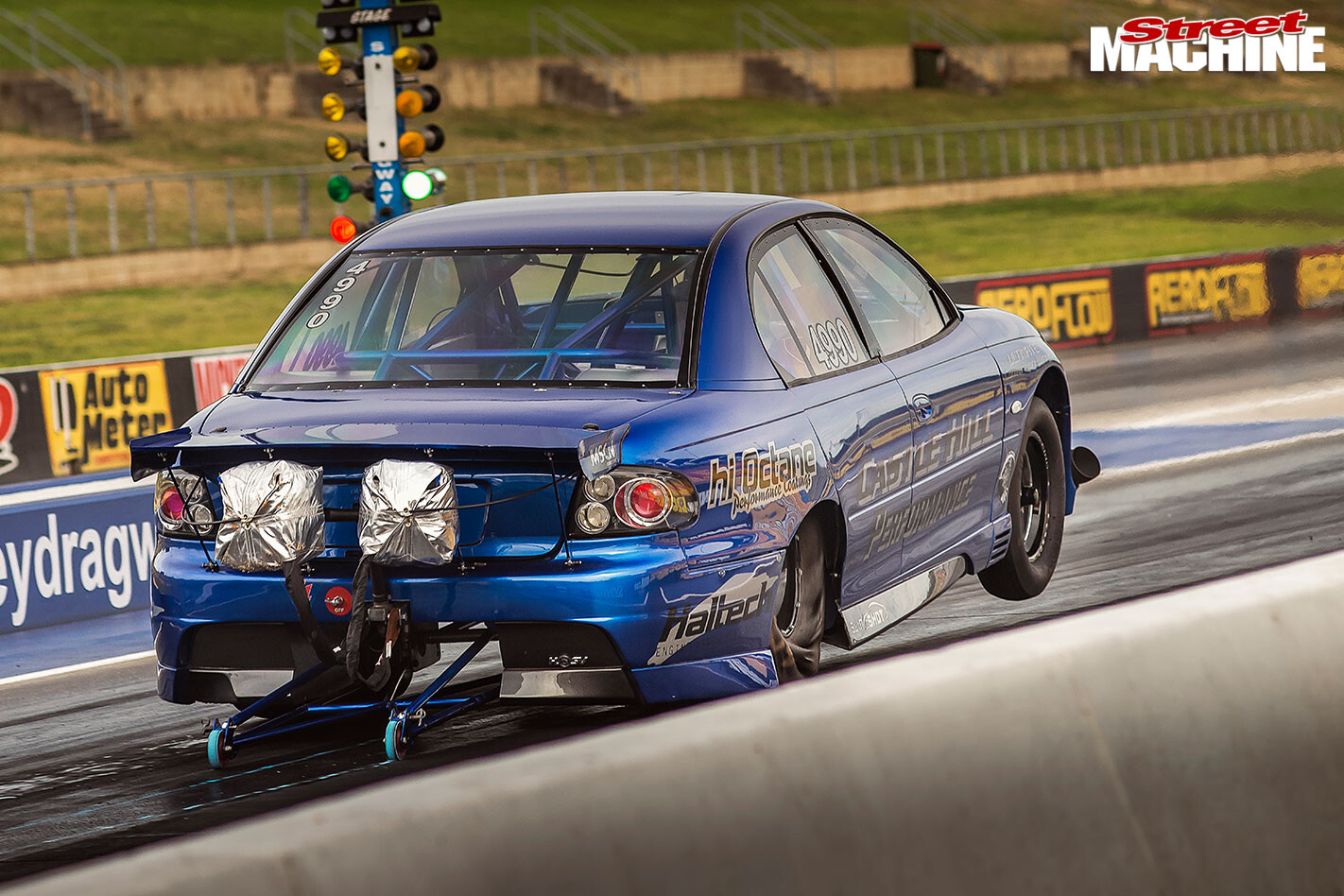 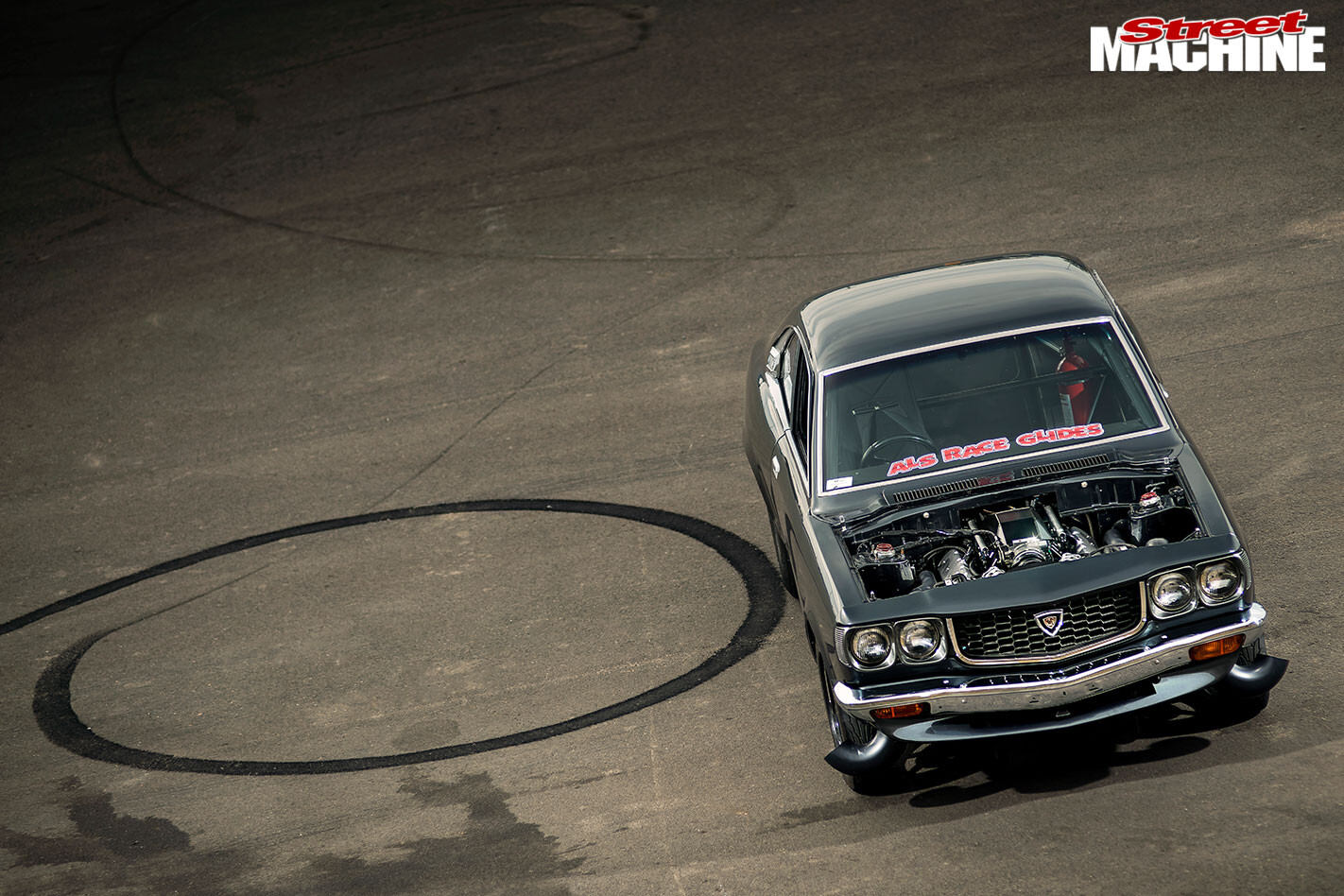