Scott Stoneman's '68 Chevrolet Camaro is a masterclass in street presence

IF YOU like the look of Scott ‘Stoney’ Stoneman’s ’68 Camaro with its slammed stance, 22-inch Simmons wheels and turbocharged LS powerplant, then you should see his other Camaro. 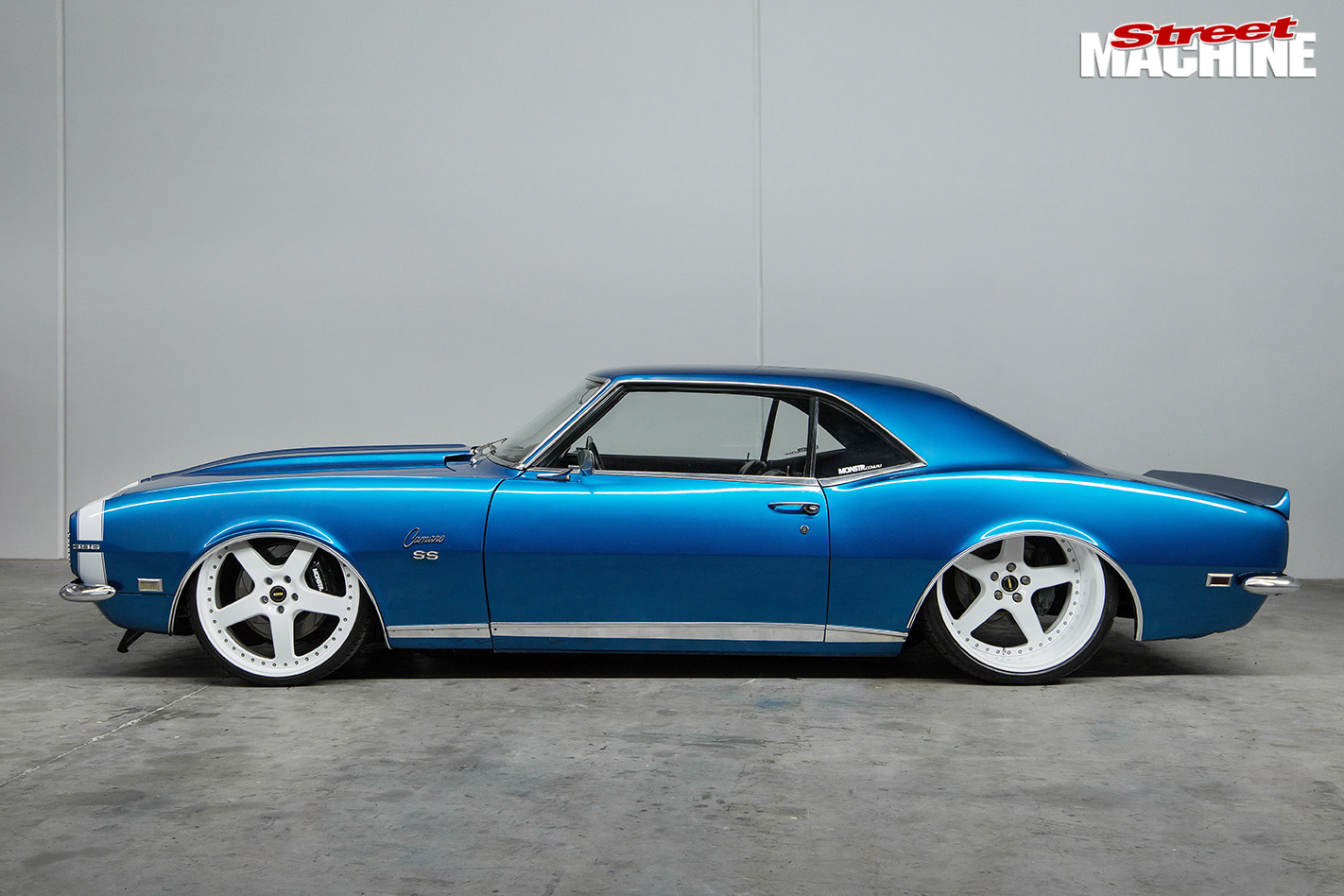 “Stance and wheels can make or break a car, especially first-gen Camaros. That’s why it needed huge wheels and to sit as low as I could get it and still be streetable,” Stoney says. Matt Allen fabricated a rear-half chassis and re-tubbed the car to suit properly huge 335/25/22 tyres

After all, this one was largely cobbled together in just three weeks with leftover hardware from his ’69 build, so you can bet the new car will be kind of a big deal when it eventually hits the road. But for now, let’s focus on the ’68, because it’s a pretty impressive bit of kit in its own right. 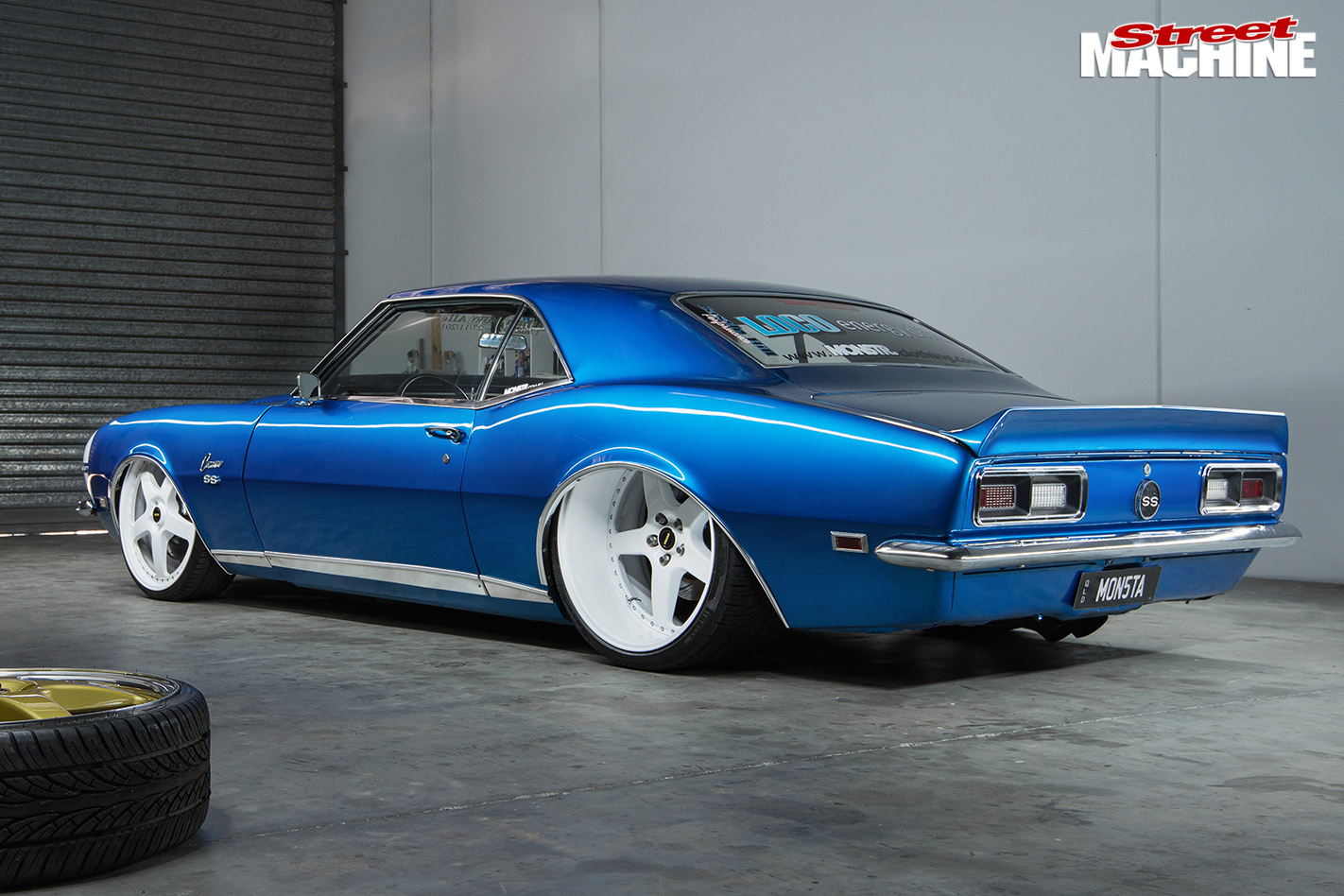 The car has a custom triangulated four-link rear end with Slam Specialties SS-7 airbags and Bilstein shocks, while plated A-arms and Ridetech airbags reside up front

“The other Camaro has a pro touring chassis from America and is body-dropped with a 14/71-blown LSX and airbags; it lays its sills on the ground on a 22-inch rim,” Stoney says. “But it’s turning out to be a long-term project, so I bought the ’68 with the intention of taking my mind off the ’69 build for a while.”

He heard about the Camaro through a mate, and after inspecting the car he negotiated a deal and bought it, in spite of the fact that it was “filthy, had the ugliest rims in the world and hadn’t been started for years”. Within the hour he had some fresh rolling stock bolted up, and after turfing the dud wheels in the skip bin behind Custom Wheels & Tyres in Penrith, dragged his new acquisition home to the Gold Coast. 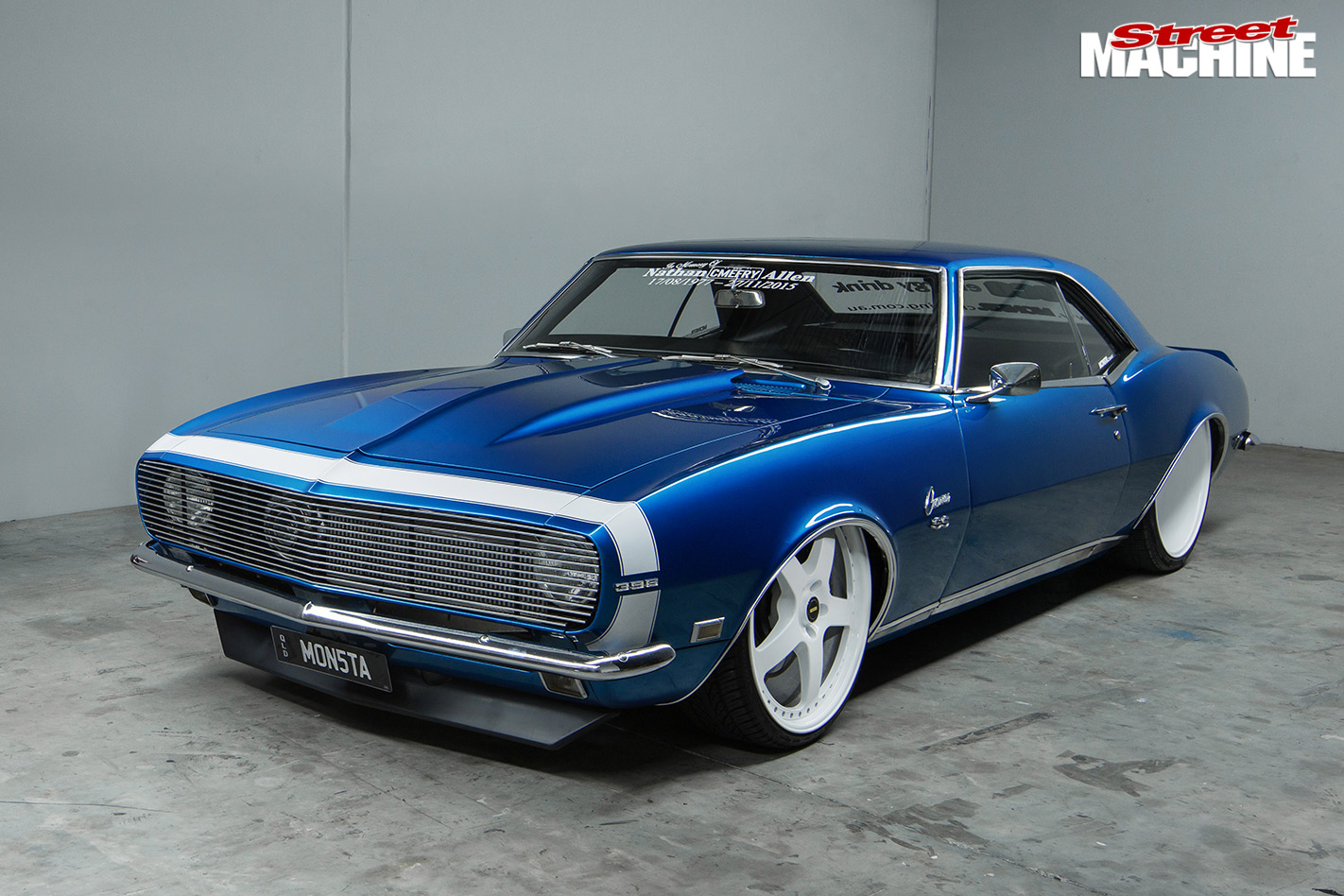 The car was already painted when Stoney bought it, but it’s been treated to some touch-ups here and there since then. The neat little reverse-cowl scoop provides clearance for the intake, but really, the car is all about stance

It was a factory big-block car with an RS grille, and had already been subjected to a butchered set of mini-tubs and some iffy rear end work. With the most modest of intentions, Stoney planned to get it sitting nice and low then cruise it everywhere, but the leaf springs had been reset so much that they had become inverted, and it rode horribly.

When he spotted a Street Rod Garage chassis for sale, he flew down to Melbourne and bought it to slide under his ’69 project. All of a sudden he had a bunch of hand-me-down chassis, suspension and driveline components, all of which made their way into the ’68. It suddenly inherited a bunch of LS engine conversion parts, a Dedenbear-cased Powerglide, airbags, AP Racing brakes and epic 22x8.5 and 22x12 Simmons wheels, and the scope of the build escalated significantly. 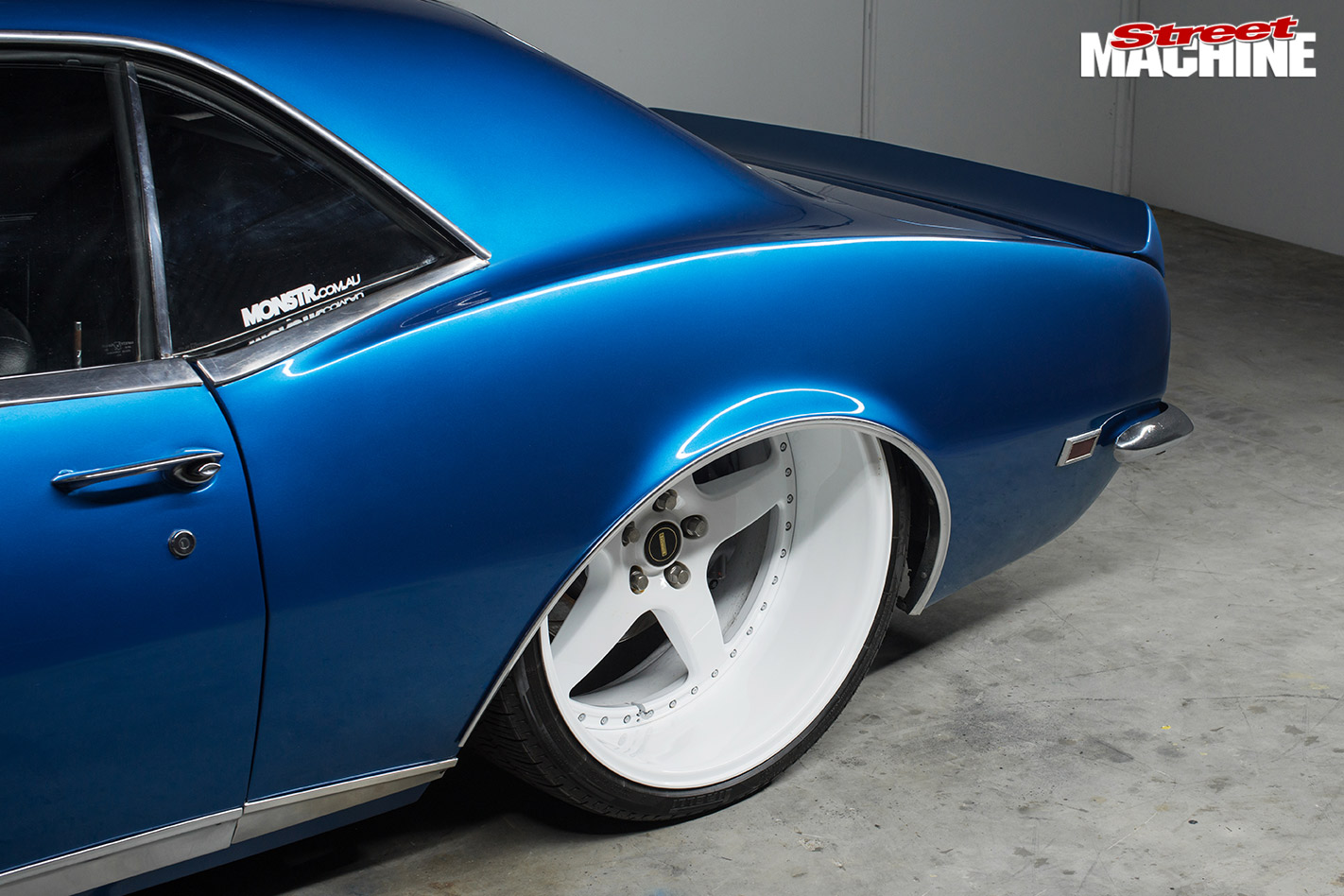 “I had a set of turbo headers to suit LS, so I figured it was easier to go turbo than to make a new set of headers to suit aspirated,” Stoney says. “The first fabricator got stuck in, ripped the car apart and mounted the engine. I went out there one day with a new Garrett GTX42 and tried to decide where to put it. One of the boys there jokingly suggested we put it right next to the headlight, and it looked cool so we went with that. I had to change the RS front for the billet grille as the headlight flaps couldn’t open due to the turbo and intercooler being in the way. Having the turbo there meant that it was just a V-band clamp straight to the intercooler.” 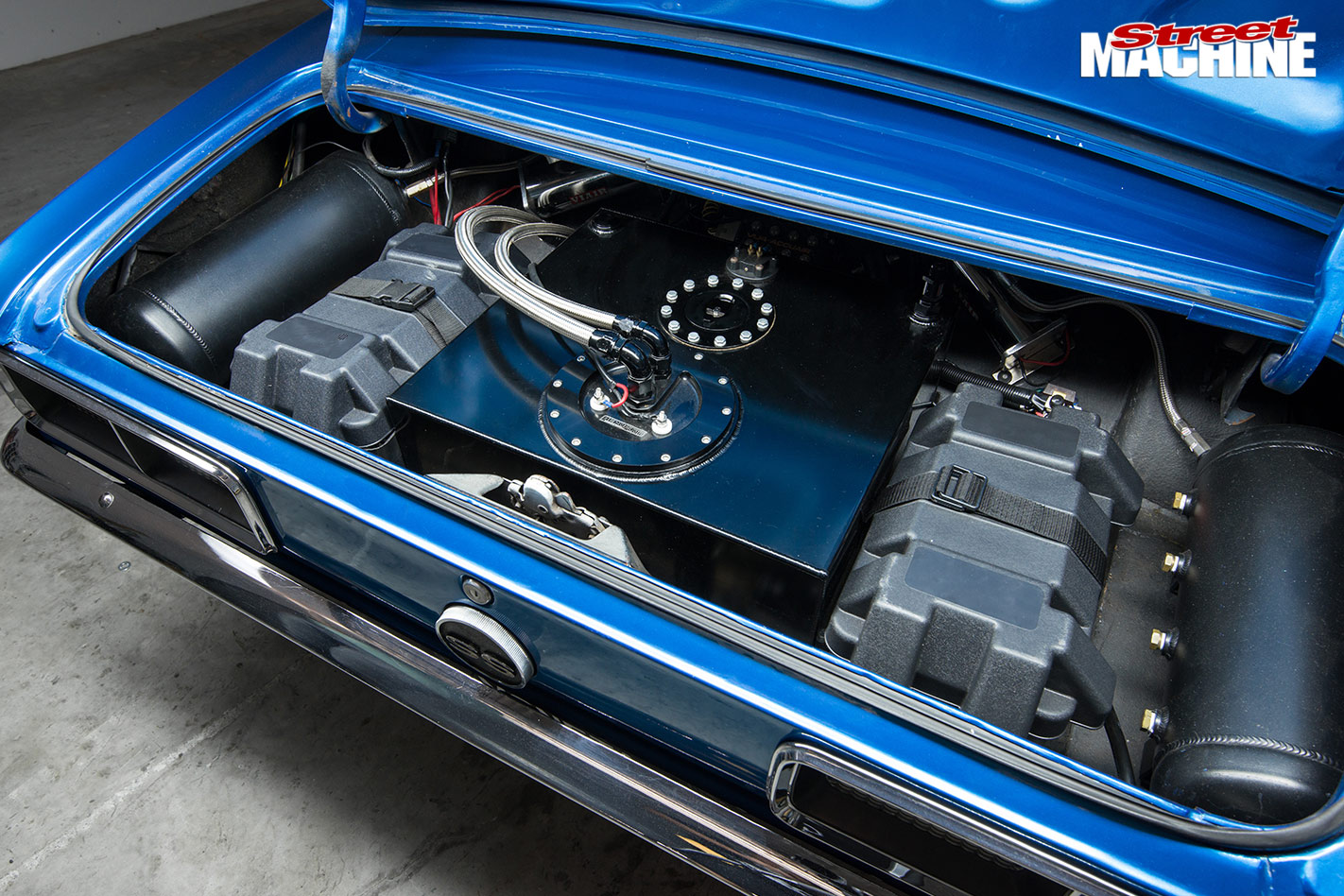 There’s not a great deal of room left back here once you factor in two batteries, a pair of Viair compressors and five-gallon air tanks, and a good-sized fuel cell. That being said, it’s all neatly and symmetrically laid out

The fabricator’s personal life meant progress halted for a while, and when Stoney eventually picked the car up, he forfeited a bunch of pre-paid funds in the process. The car then went to his good mate Nathan Allen at Elite Fabrications, but sadly just days later, Nathan took his own life. 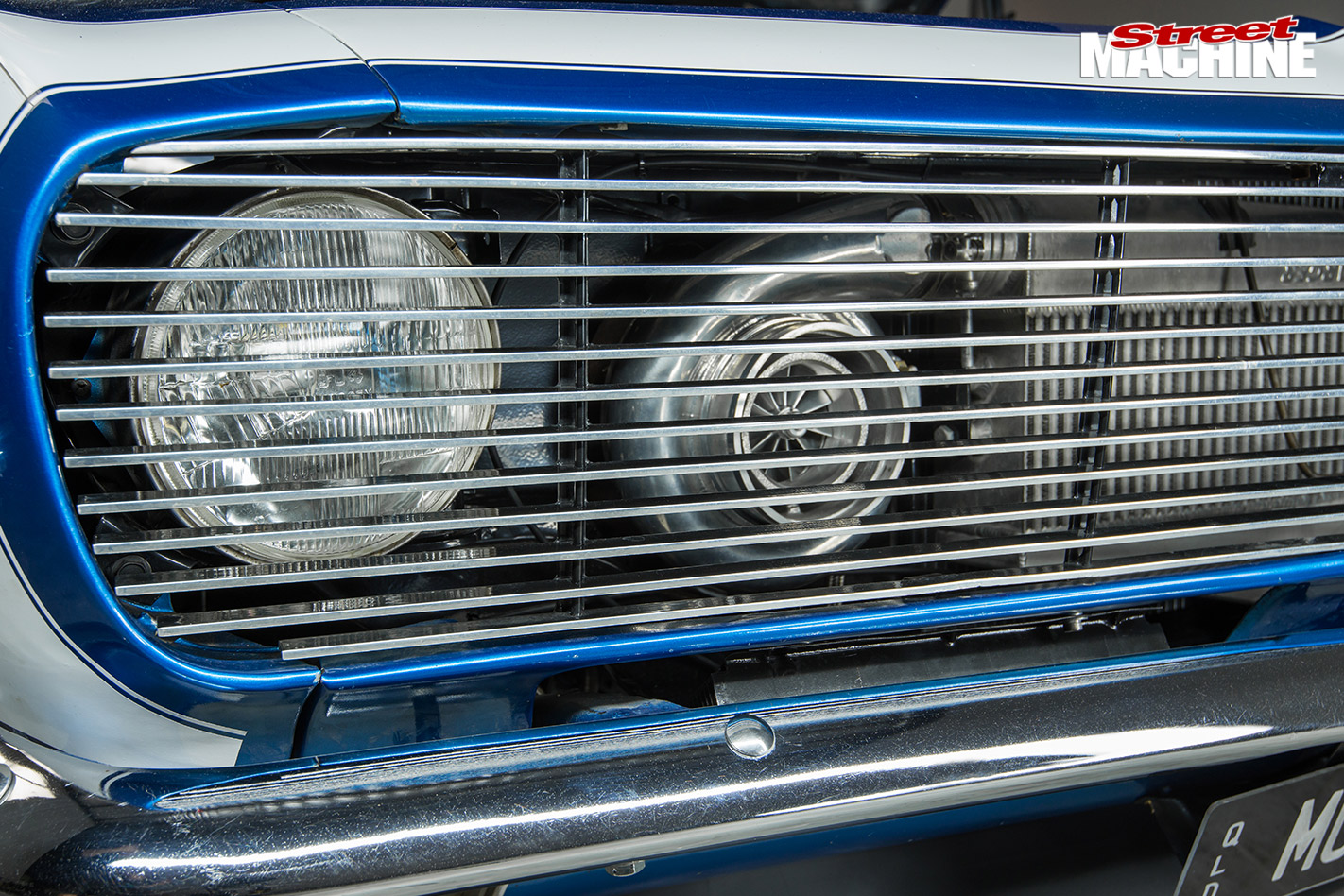 The billet grille only partially obscures the Garrett GTX42R and front-mounted air-to-air intercooler from view. It’s a pretty tough look!

“At Nathan’s funeral, mid-December 2015, Nathan’s brother Matt Allen and I decided that we would take the car to Summernats in January. It didn’t need to be 100 per cent finished, as it would just go on the Monstr Clothing stand – it just had to look pretty. He had three weeks, and while it seemed possible, it turned out there was a lot more work than what I’d explained to Matt. Sorry mate!” 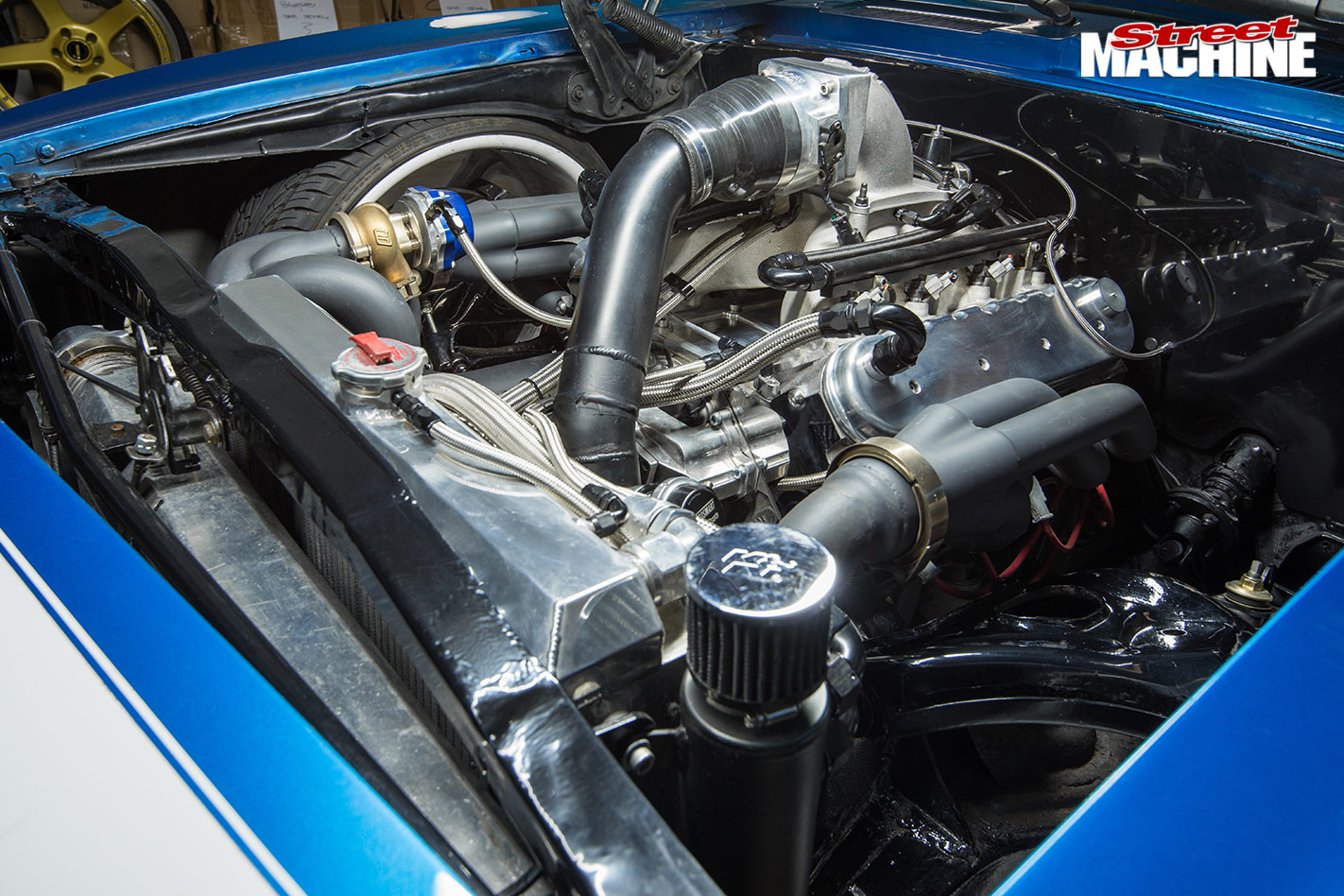 At the time of our shoot, the engine was an internally stock L98 with the exception of an HTP turbo cam, Morel tie-bar lifters, Comp pushrods, and a Melling oil pump. The intake is an Edelbrock Victor Jr topped with a Wilson elbow and a Wilson 100mm throttlebody, through which positive pressure enters the engine courtesy of a Garrett GTX42R

Matt, his dad John and a heap of other guys spent three weeks solid working on the car at his shop Extreme Metal Craft in Cowra, finishing the engine conversion, wiring, fabricating the exhaust, fitting the airbags and brakes, doing the whole rear-half chassis and floor, and building the four-link and boot floor.

There were teething problems, as one would expect, but the car made it to Summernats, and when Stoney first saw it dumped into the weeds and tucking six inches of rim, he was stoked to say the very least. 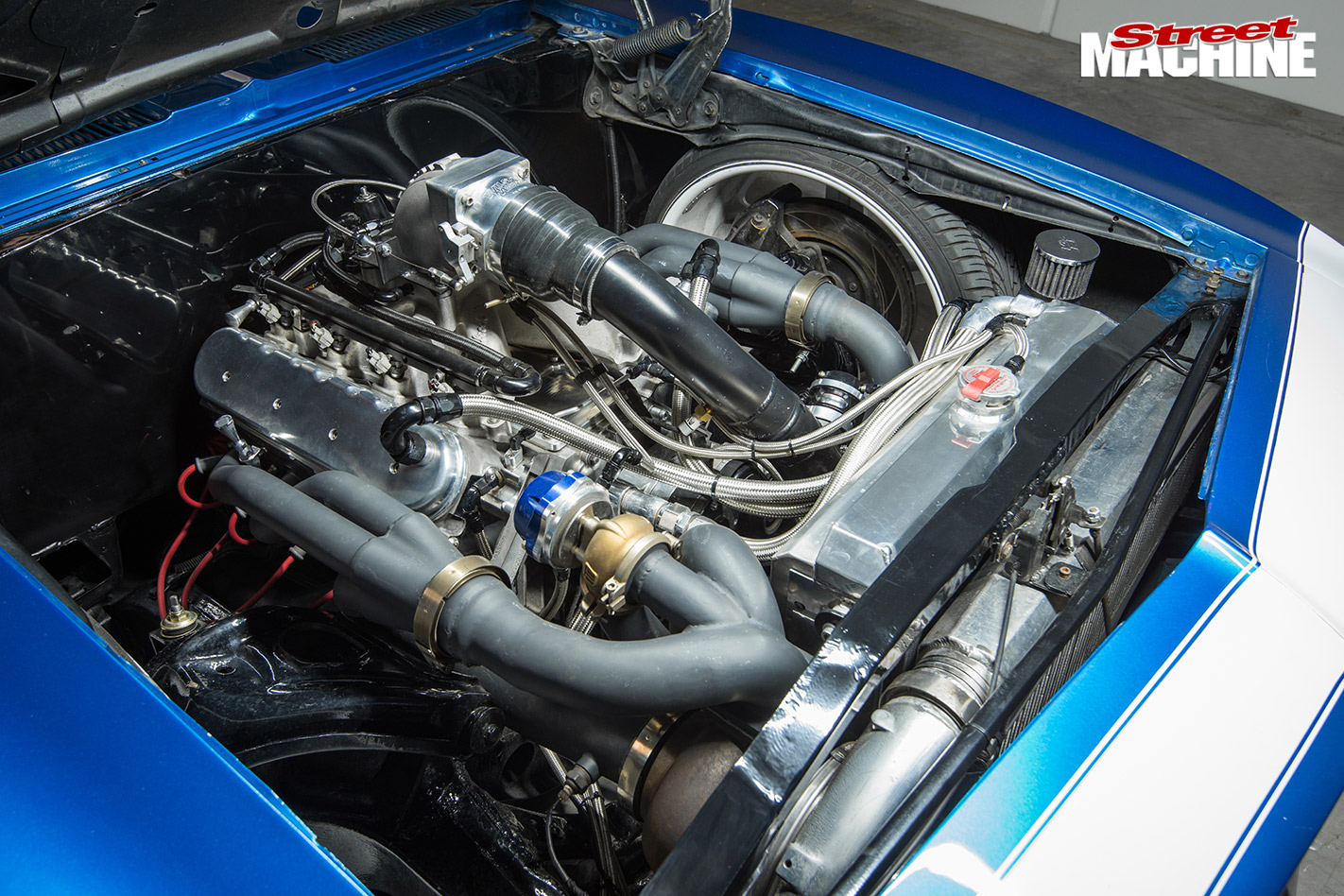 Initially tuned for 590rwhp on pump E85 and 10psi, Stoney then wound up the wick to 650hp at the hubs before swapping the engine out for a much tougher set-up

After the ’Nats, he worked through the bugs and the Camaro went on to become a fully-fledged street car. Matt from MKA rewired it from front to back, while Castle Hill Performance installed the Haltech Elite 2500 and managed to fetch an impressive 590rwhp out of the cammed L98 6.0-litre on just 10psi of boost. With a loose converter and modestly proportioned turbo, Stoney tells us it’s a hoot to drive on the street. 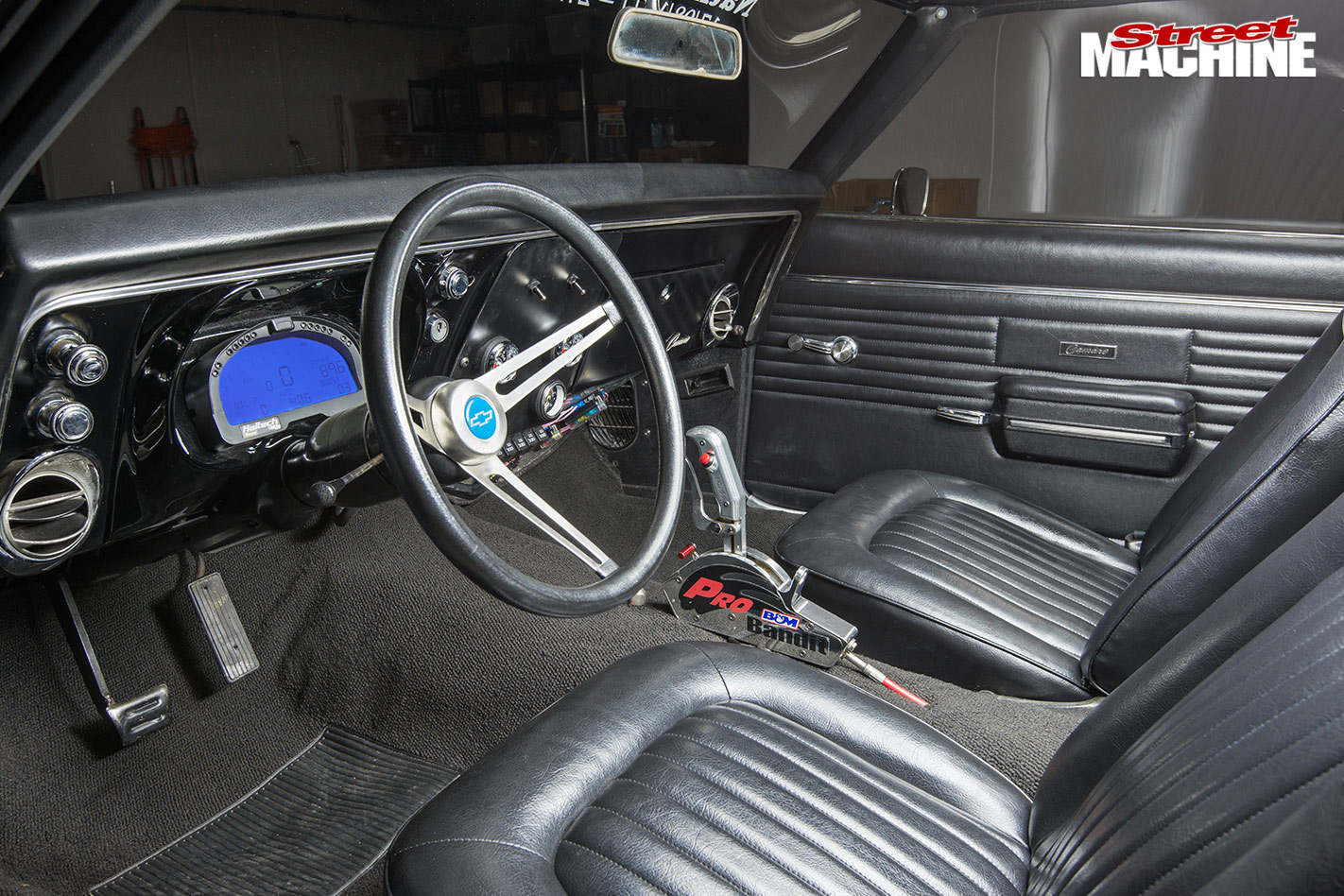 Stoney wanted to retain the original feel of the interior, so one of the first things he did was remove the cheap and nasty steering wheel it came with and chuck it in the Nepean River. Chris from Trim FX handled the retrim and made it look as close to stock as possible, even creating a stock-looking (though non-functional) rear seat to cover up the tubs

“One of my best mates has a 1000hp turbo LSX Walky,” he says, “and it is so laggy compared to this that even though it makes twice the power, the Walky would need a long street to catch it.”

It’ll need an even longer street now, because since these photos were taken, Stoney’s fitted up a forged stroker engine in search of even more grunt. He’s also looking to offload the car, because the time to move forward with the ’69 build is at hand. If you can see yourself prowling the streets in this tubbed, ’bagged and turboed monster, we’ll be happy to put you in touch with him. 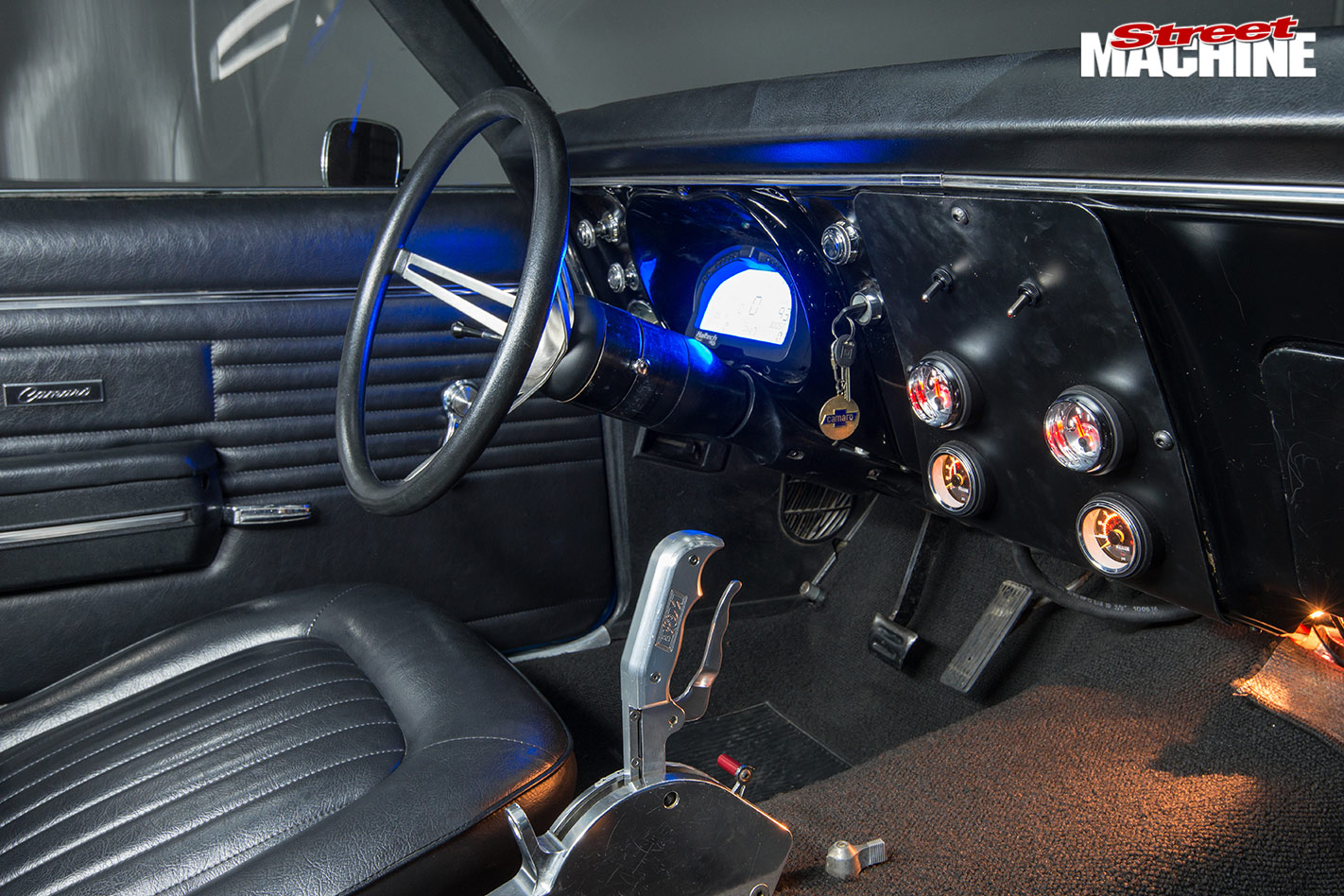 “Matt and John Allen were key to getting this car done,” Stoney says. “They have gone above and beyond helping me with everything. At the end of the day, the main part of the car was built in three weeks with a bunch of leftovers from my other car, because as Nathan always said: ‘There’s no such word as can’t.’”