Mark Thomson built his fat HG Premier as a cool cruiser, but it didn’t get his family’s tick of approval until it had a turbo six-litre LS V8

MANY of us love to involve our friends and family in our hobby, to show them why we spend all those nights with skinned knuckles working on a car we curse ’til the early hours of the morning. Fortunately for Geelong’s Mark Thomson, his wife Jodie and sons Archie and Cohen love his tough turbocharged and injected HG Premier. “It means a lot to have my wife and two sons support my hobby,” Mark says. 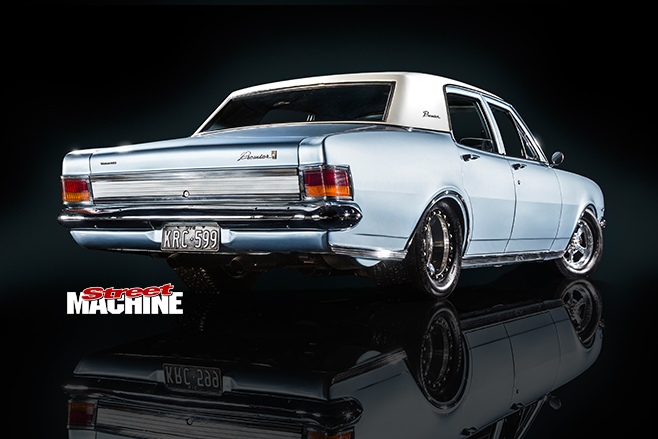 Geelong Holdens have a certain look, normally slammed on classic pro street-style wheels, and Mark’s HG is no exception, with 15x3 Mickey Thompsons up front and 15x10 Max Dumesny rims under the bum, wrapped in classic BF Goodrich T/A 295/50 tyres

In fact, the reason he purchased this HG was to have a car the whole family could enjoy. “I bought it back in 2010 after completing a full resto on an HT Monaro,” he says. “I was after another project, but with kids on the scene now I wanted a four-door. I saw an 80-year-old man drive the Premier into a caryard in Footscray; I followed him in and watched him trade it in on a Holden Astra, so I bought it off the caryard.” 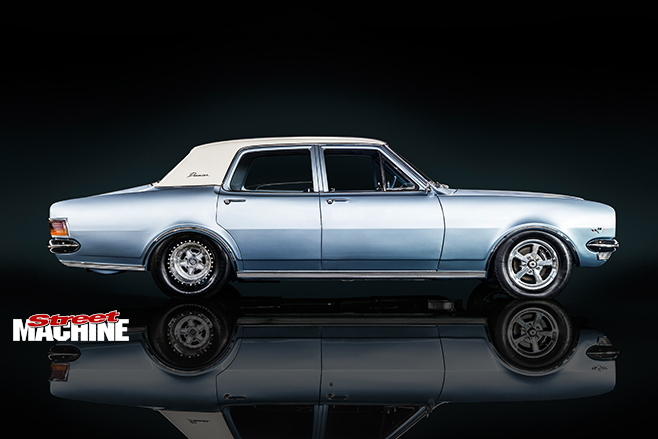 The driveline in Mark’s HG is nuclear-tough, with the Powerglide copping a transbrake and manual valvebody, and a custom tailshaft that won’t twist when those fat tyres hook up. Plus there's a stout 9in so Mark shouldn’t ever be left with broken gears

While it had obviously been a loved car, that didn’t mean it wasn’t in need of a fair bit of fixing, which is where Mark’s mates stepped in. Together they built a fairly traditional Geelong cruiser, complete with mini-tubs and a gruff 400ci Chev small-block. “The original plan was to leave it a six-cylinder for a while and just cruise around, but as the old story goes, next minute it was all pulled apart, panels sand-blasted and body paint-stripped,” Mark laughs. “Rod Drew hand-fabricated all the rust repair sections; he is an incredible self-taught metal fabricator and some of the sections he made looked like they were genuine Holden parts. After the rust was sorted my good mate Mark Drew performed his magic massaging the body back into shape and also got those 295/50 tyres squeezed under the rear.” 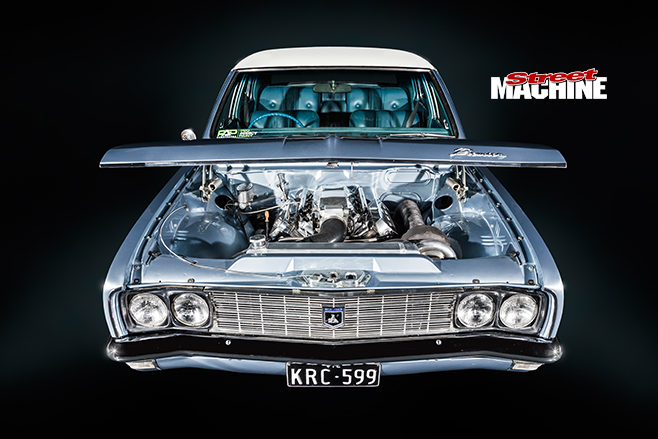 Cooling is handled by an alloy radiator and twin thermo fans, doing a good job of shedding the heat built up by Drewy’s custom turbo manifold

There was no way the original Premier wheelhouses would accommodate nearly 300mm of tyre on each side, so offset shackle-mounts were fabricated and installed, shifting the reset leaf springs inward by one inch while the wheel tubs were extended to meet the inside face of each chassis rail. Once the fab work was done, Mark sent the shell off to get squirted. 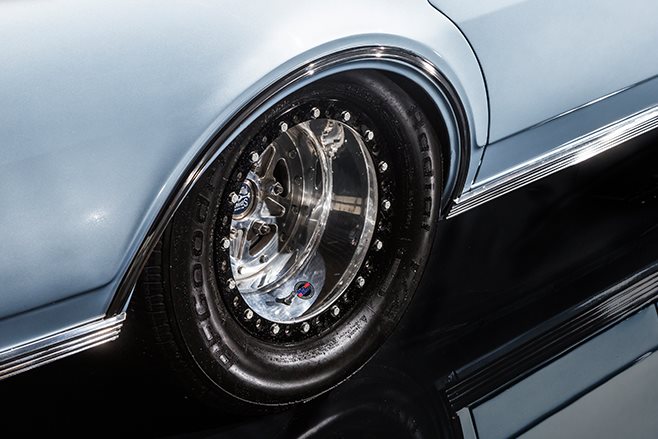 Braking is handled by Wilwood front discs and HQ drums in the rear, while the tough stance is thanks to King Springs up front, reset leaf springs out back and Pedders shocks keeping the bounce in check

“Matt Petrovics from Pro Addict Paint rubbed and prepped the car for paint and Jake Forder was good enough to let us use his booth,” Mark says. “The roof was painted in factory Kashmir White and the body in Electra Blue. Matt did an amazing job; I’m so happy with how flat the paint is on this car. 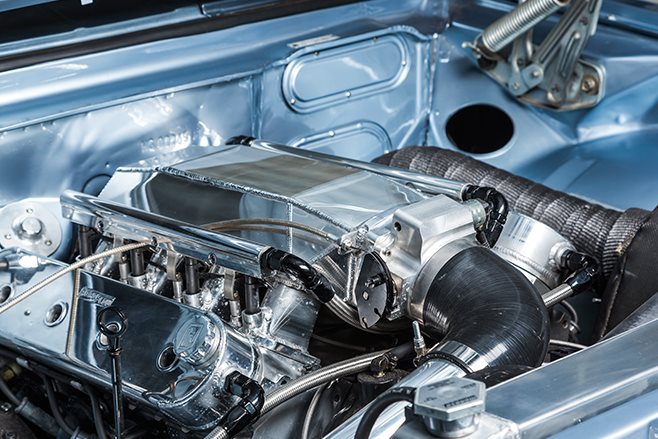 “I spent a Christmas break re-assembling the car and had it ready from paint in December to driving in January, where it debuted at the Colac Hot Rod Show.

“Now, we originally built a 400-cube Chev small-block for the HG and we drove this around for a year or so, but it was a fuel-guzzler and not very inspiring. Mark Drew suggested we have a go at building a turbo LS set-up, as he had a lot of success with his wife Raelene’s HR.” 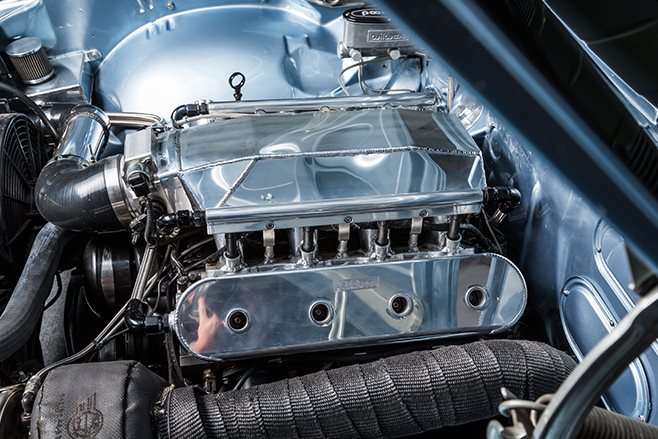 Mark and Raelene’s LQ9-powered HR has graced the pages of SM (Sep ’15), but the force-fed LS package Mark put together for his mate’s HG Premier is much tamer than Raelene’s eight-second terror. A Gen IV six-litre L98 was the base for the build, as the deep-breathing rectangle-port heads can swallow bulk air, and they’ve proven more than capable of making plenty of horsepower with basic supporting mods. 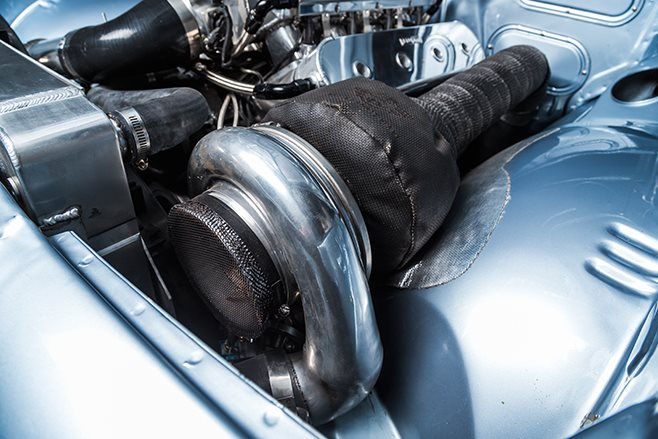 Mahle pistons and a 222/232 cam are the major improvements inside the motor, which is topped by a custom intake plenum. The turbo is a 73mm eBay special, pushing charge air through a custom air-to-air intercooler mounted between the grille and radiator. 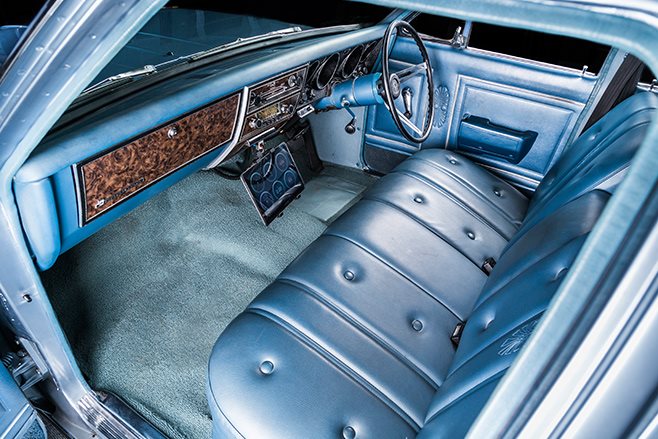 Fitting LS motors in HK-T-G Holdens normally requires either converting the car to a steering rack set-up, or extensively customising the oil pan. To avoid doing things twice, Mark chose the latter. “I wanted to keep the steering original, as I’d replaced everything when I originally built the car,” he says. “I bought a fancy bolt-on sump from a supplier that was super-expensive and it didn’t fit, as it was built for rack-and-pinion steering, so I sent it back and got a stock VE sump. Drewy then cut that up to make it fit around the stock crossmember.” 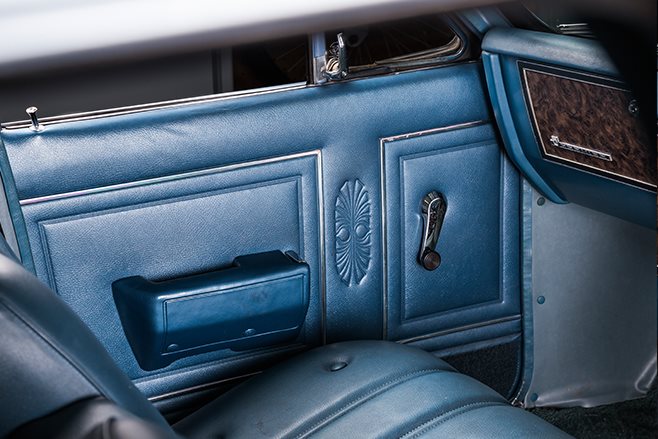 Three in-tank Bosch fuel pumps supply the pump gas to the deep-breathing six-litre, from the modified original tank, while the computer is a Holden PCM from a VT Series II Commodore, flash-tuned to handle boost and the bigger cam. On the chassis dyno the Prem laid down 523hp at the wheels, which is epic for a tidy street cruiser. 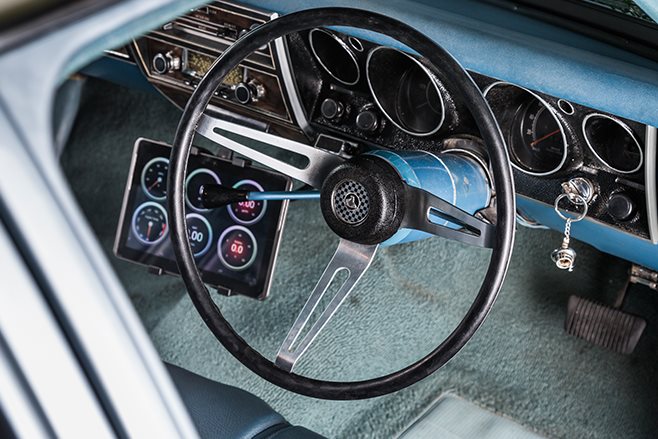 “Drewy re-built the engine, fabricated the exhaust manifold, plumbed the turbo and wired the whole car,” Mark marvels. “His development of his wife’s turbo LS HR set-up allowed him to use his experience to build me a really nice package that performs extremely well under all conditions.” 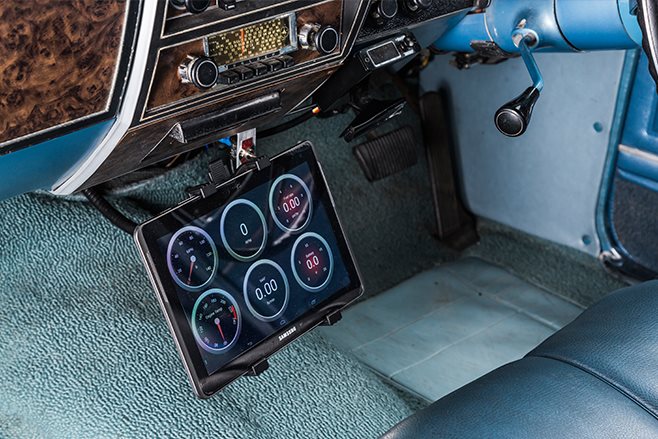 The digital ‘gauges’ read directly out of the late-model computer’s diagnostic port to a Samsung tablet via an app, while the column was modified to accept the column shifter cable

Behind the turbo Gen IV is a transbraked two-speed Powerglide with a 3500rpm converter, built by Matty DeSpirt at MDT Race Engines & Autos. Under the bum lives a Ford nine-inch built by Matt Dietrich and the team at Geelong Differential Services, equipped with all the good gear needed to handle the turbo torque, including 35-spline axles and a Truetrac centre. 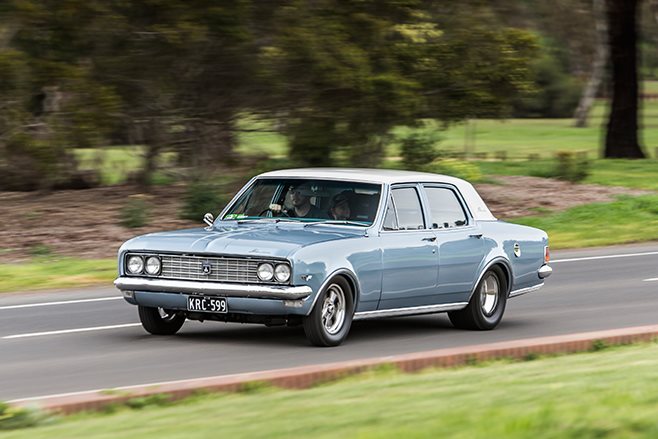 Mark reckons the driveability is awesome, with the big four-door happy to do domestic duties but also capable of serious speed. “It gets about 350-400km per 60-litre tank of fuel, and I dropped my two boys off to day care and kinder in it one morning, then drove it to work in Melbourne. I later drove out to Calder Park after work and went 10.84@126mph, then drove it home to Geelong.” 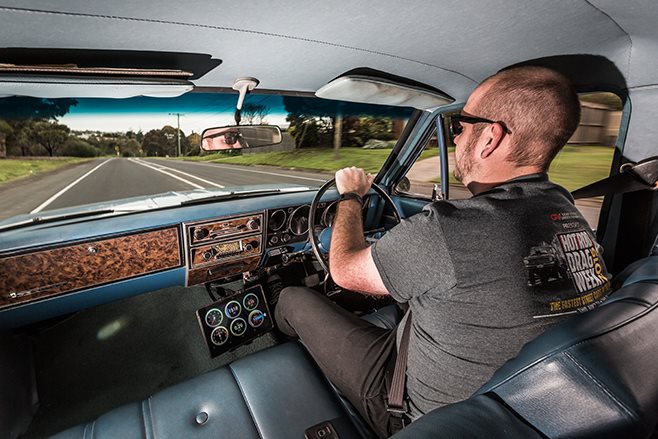 A 10-second family-friendly streeter in the body of an almost half-century-old cruiser? LS the world, indeed! 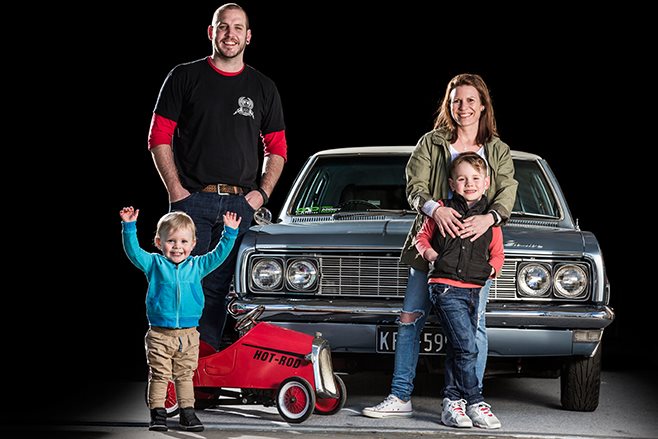 Mark credits his awesome car to not only his mates but his family. “Blokes like me and my mates down here in Geelong can’t build cars like this without the support of our families,” he says. “Jodes enjoys going for a cruise and jumps behind the wheel on occasion; she is very supportive of my addiction! My two boys absolutely love being in the car. We regularly drive it to swimming lessons on Sunday morning” 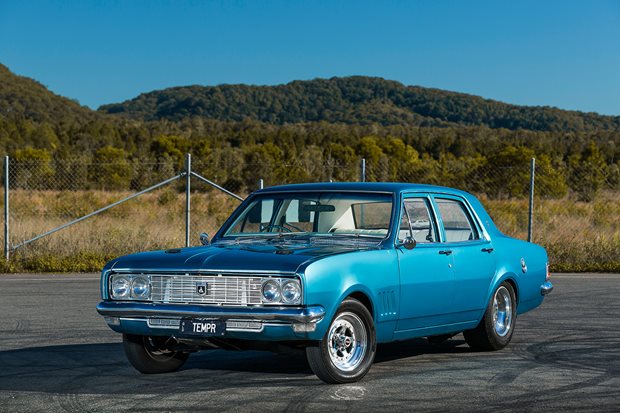 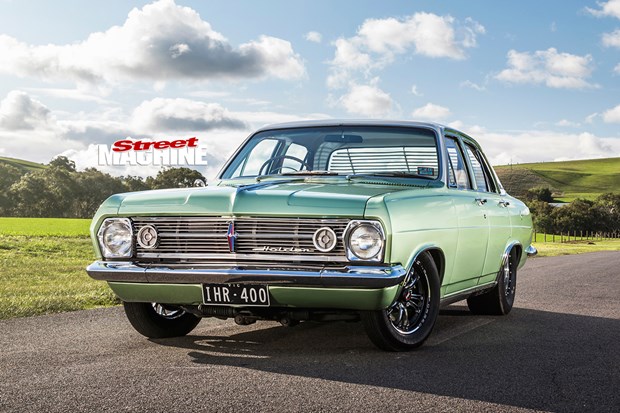 With Raelene's '68 Holden HR Premier and Mark's '74 Holden LH SL/R Torana, the Drews prove the family that plays together stays together