IN THE hazy heat of outback South Australia, Mark Reiners is sitting under the tarp that’s shading his team’s pit area, bare-chested with the sleeves of his fireproof race suit tied around his waist. Sideways in his chair with his feet up, he’s holding a can of Canadian Club. He’s just returned from a run at DLRA Speed Week, the vast and fast land speed racing event held on the dry salt surface of South Oz’s Lake Gairdner.

This article was originally published in Street Machine LSX Tuner #3

Cracking a can and having a think is what most salt lake racers do when they’ve just knocked-off for the day. But Mark is definitely not flashing his usual grin under his red-tinged mo — that’s because he’s just spun a Holden Commodore at 187 miles an hour. 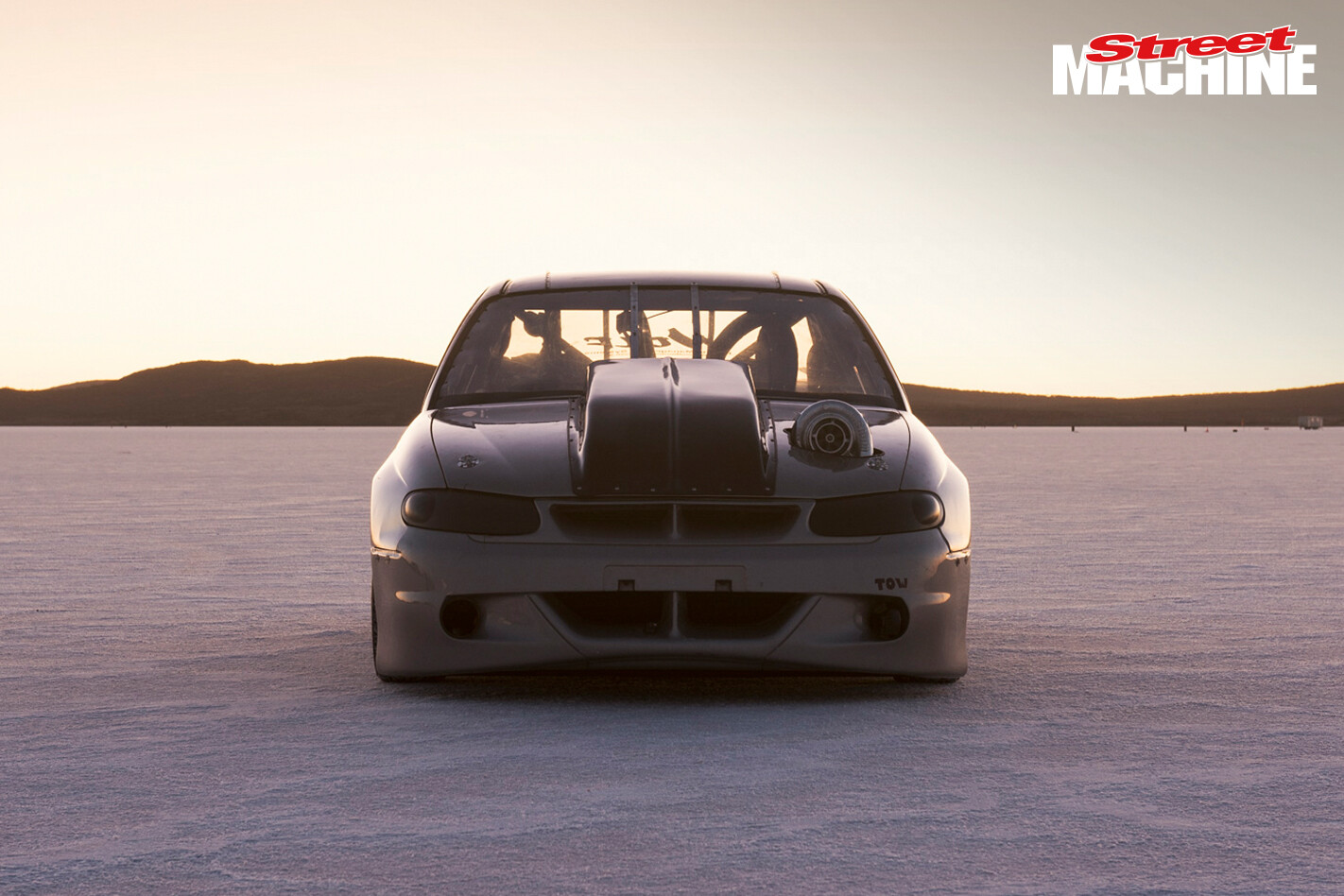 Then he had a minute or two of freak-out time waiting for his crew to arrive, looking at the trail of debris along the wide, white course, ejected from the Commodore as, first, it’s driver’s side front tyre exploded, the front spoiler dropped onto the salt, fractured and scuttled under the car, lifting the Commodore into the air and slewing it sideways, to be partly strangled – and have its tail lights gouged out - by its own parachute tether. Think about all that for a moment. What would be going through your mind?

“It was like muscle memory,” said Mark of his shutting down of the car’s ignition, battery and deployment of the chute after the tyre burst and he knew he might be in a little spot of bother. “Half the spoiler went over the top, it was off the ground. I went doonkdoonk [mimicking his left hand flipping the shut-off switches] and got to the chute.” His voice trails off a little: “But I hardly knew where I was [facing].”

I can see — as can his best mate and team-mate Steve Main, plus the others who are here — he’s seriously rattled by his fast flat spin! Rewind a week or two and it was all systems go for the VT Commodore as its finishing touches were being applied to its turbocharged LS engine with the ambition of taking both Mark and Steve beyond the car’s 200-point-something miles per hour. Rewind even further – three years – and the VT Commodore was debuted at Speed Week 2013 with a centrifugally supercharged V6 after Steve and Mark screwed it together for a bit of fun.

Complete with an untouched 272,000km bottom-end under the ported heads and pump, the car ran 178mph with an auto and a remapped standard computer. The blower was a planetary-drive centrifugal Rotrex for plenty of top-end wind. Over the next two events the car was improved with cam, head, blower and management upgrades. And a bottom end rebuild! Big gains came from fitting a Wolf management system with data logging and ditching the auto for a manual gearbox, a six-speed TR6060 from a VE Commodore. For 2015 it had an even bigger cam from Phil at Sure Cam in Port Macquarie, NSW which gave the Ecotec V6 another 120hp at 3psi less boost — in other words, it was more efficient at creating power from juice and air — enough for 200.760mph.

Could the little blown V6 be made to go faster? Possibly — But stuff that! The lads wanted a V8, so bought a 4.8-litre LS1. Usually found in Chev Silverados, this is the smallest of GM’s now-legendary LS family with a short stroke inside an iron, not alloy, block. Better for revs, better for boost! The specs of the engine are surprisingly unexotic, being pieced together with an eye to durability as well as speed.  From the bottom up; it has a modified oiling system using a Mellings oil pump, the rods carry ARP bolts and the stock crank and rods spin in new ACL Race Series bearings. The pistons are also standard but with an opened-up top ring gap.

“It has ARP head studs and our head guy in Queensland [Nick at Top End Performance in Slacks Creek] did a set of ported heads for us,” says Steve. “Nothing wild but it’s what he does for boosted engines — and we went for another cam from Sure Cam.” The roller rockers are Howards and the head gaskets MLS.

The turbo installation? The original Silverado exhaust manifolds were turned forwards and a single turbo installed on some simple pipes to a Magnum Performance turbocharger. The Silverado intake manifold — taller and torquier than the Holden/Corvette/Camaro units — was retained but reversed to suit the intake plumbing. The Plazmaman intercooler runs iced water piped from an ice box in the rear seat area.

Plenty of time was spent on the dyno at James Harris Automotive — close to Mark and Steve’s homes in Wodonga — to get the tune as close as possible with the Wolf management allowing the tune to be touched-up depending on the conditions at the event.

With salt lake racing requiring full-power, wide open throttle, max-speed runs for several miles (not just, say, a quarter-mile, or the on- and off-throttle of a race circuit) data from the engine is critical, not only for performance but for engine life. Again, Steve explains: “At the salt we’re looking for stable oil temperature and pressure. We’re looking for inlet and outlet temps and throttle position, we’re looking for individual cylinder temperatures — we have a probe in each port — and it’s all got to stay cool!”

With the new V8, intake temps were less than 30 degrees in ambient temps that were close to 40. Yes, it is stinking hot at Speed Week in outback South Australia in early March. While we’re discussing hot and cool, the LS’s cooling uses an electric water pump and an alloy radiator from fellow salt lake racer Norm Hardinge and his respected Aussie Desert Coolers outfit. There’s a big oil cooler, too. When the car was built four years ago, this pair of mates were both living and working in Queensland. The tasks were divvied: Steve on the engine and Mark on the chassis. Astonishingly, it was completed in less than six weeks.

“We started with a wheelie bin,” says Mark. “That’s where most of the interior went! We wanted to run in production class but all we had to retain, really, was the dashboard. If it’s not needed — it’s out. That all sounds easy, but it was an enormous amount of time and fiddly stuff to build — exhaust and sorting out fire systems and the cage and wiring and the suspension with all the hoops and stuff.” Of course, there’s a big DLRA-spec protective cage. The car is heavily ballasted with 30mm steel plates bolted into the rear footwells and a driveshaft from a CAT 785B dump truck — one of those huge mining company rigs that needs a ladder to get into — fixed across the rear seat base. It weighs nearly 300kg! There are four tailshaft loops for the two-piece shaft, as well as for the CV shafts in the stock IRS rear suspension, plus tethers for the rear suspension arms.

The Commodore’s diff housing carries the internals from a 3.3-litre XE Falcon — the taller ratio helps with the car’s top speed. With the supercharged V6 the six-speed manual was used in fourth gear and with the turbo V8’s extra output it was pulling fifth gear at V-Max. As with many salt lake racers, the overall gearing means first gear is like a normal third gear in a road car and the car needs to be pushed to 40 or 50km/h as it simply cannot get going by itself. 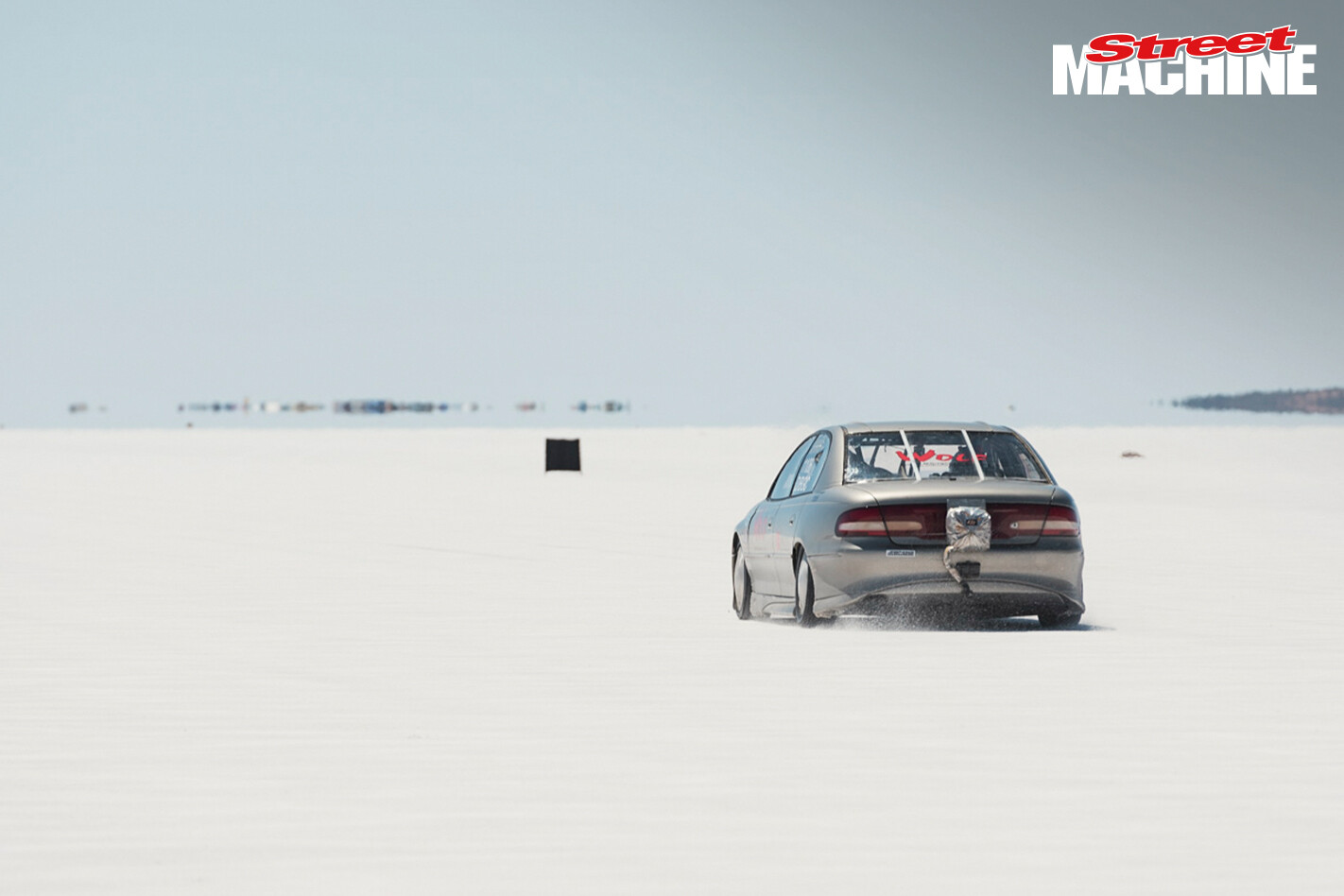 By lunchtime on Tuesday it’s game-over for this mob’s 2016 DLRA Speed Week. With its nose and tail damaged, it looks like it’s been in a peak-hour bingle and there’s the concern the gearbox is damaged internally after the high probability it was turning 300km/h backwards. And anyway, there’s no spare tyre.

Fast forward to 2017 and the VT salt lake racer was back in action. This year the car clocked 205mph, but it could have gone even faster. The tyres were speed limited to 205mph and by the time it reached that speed it was still pulling hard. She's got long legs, and Mark and Steve will be back again next year to go even faster. THANKS
Tammy and Charlotte. Kylie and future drivers Harry and Billy. Robbie at Wolf. Kempy Race Chassis. James Harris Automotive. Brad at Bolts Mechanical for the TIG work. Matt at Parker Industries for machining. Phil at Sure Cam in Port Macquarie. Fellow DRLA speed demons and crew. Blake and Poppy for the support at the salt