It might not have steel bumpers, but Justin Ellis’s KINGGM Commodore is every inch a right royal kick-arse street machine

WE LOVE classic metal here at Street Machine, but the appeal of hot rodding a late-model muscle car isn’t lost on us, either. Melbourne’s Justin Ellis has applied a very traditional and comprehensive approach to the build of his VY SS Commodore, with impressive results. 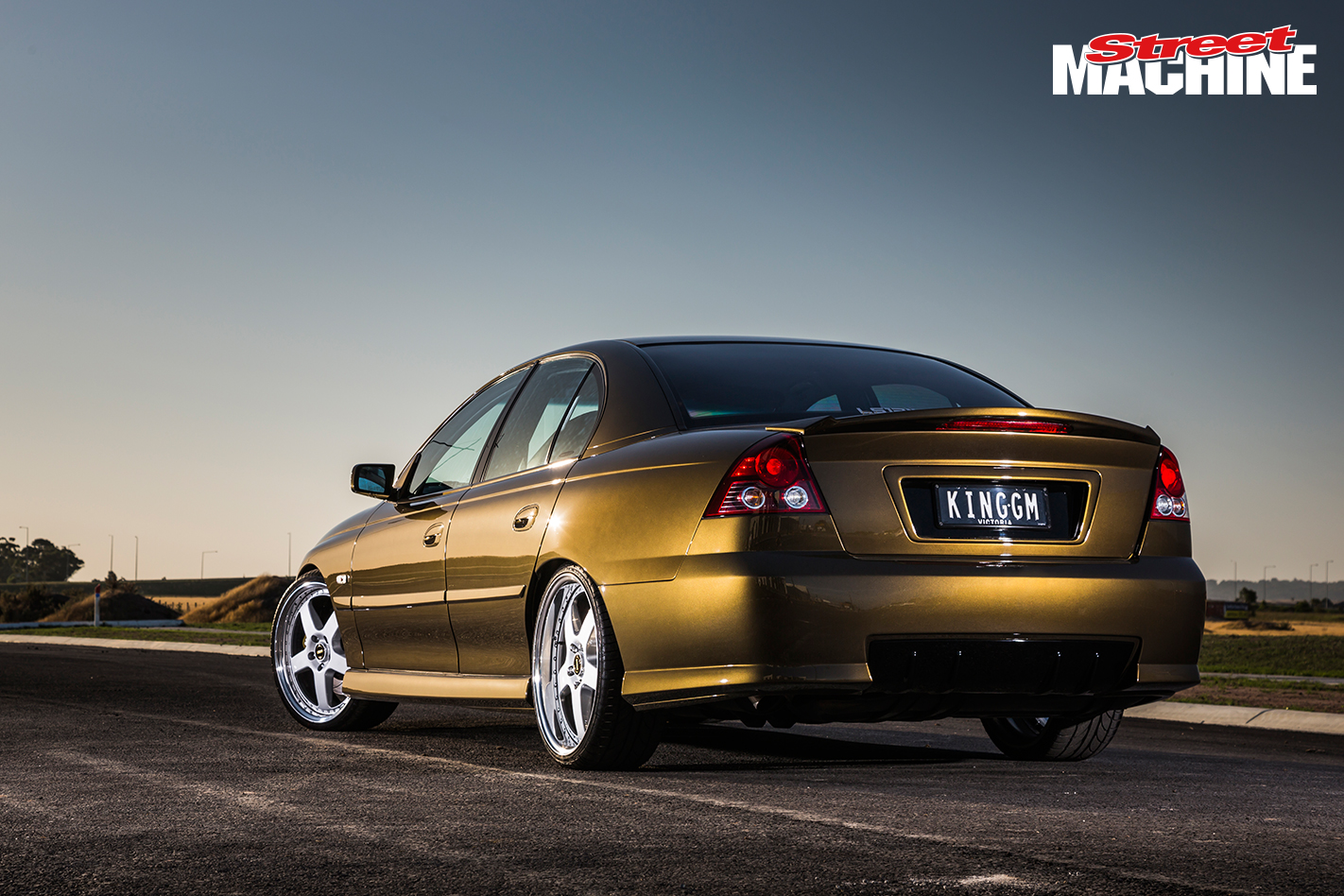 Unlike the majority of modified late-model Commodores, KINGGM is more than just a cam-and-heads package, lowered coils and a set of 20s. It was completely rebuilt from the ground up, and included body mods, custom paint and trim, and a built – and very turbocharged – 408ci LS combo. 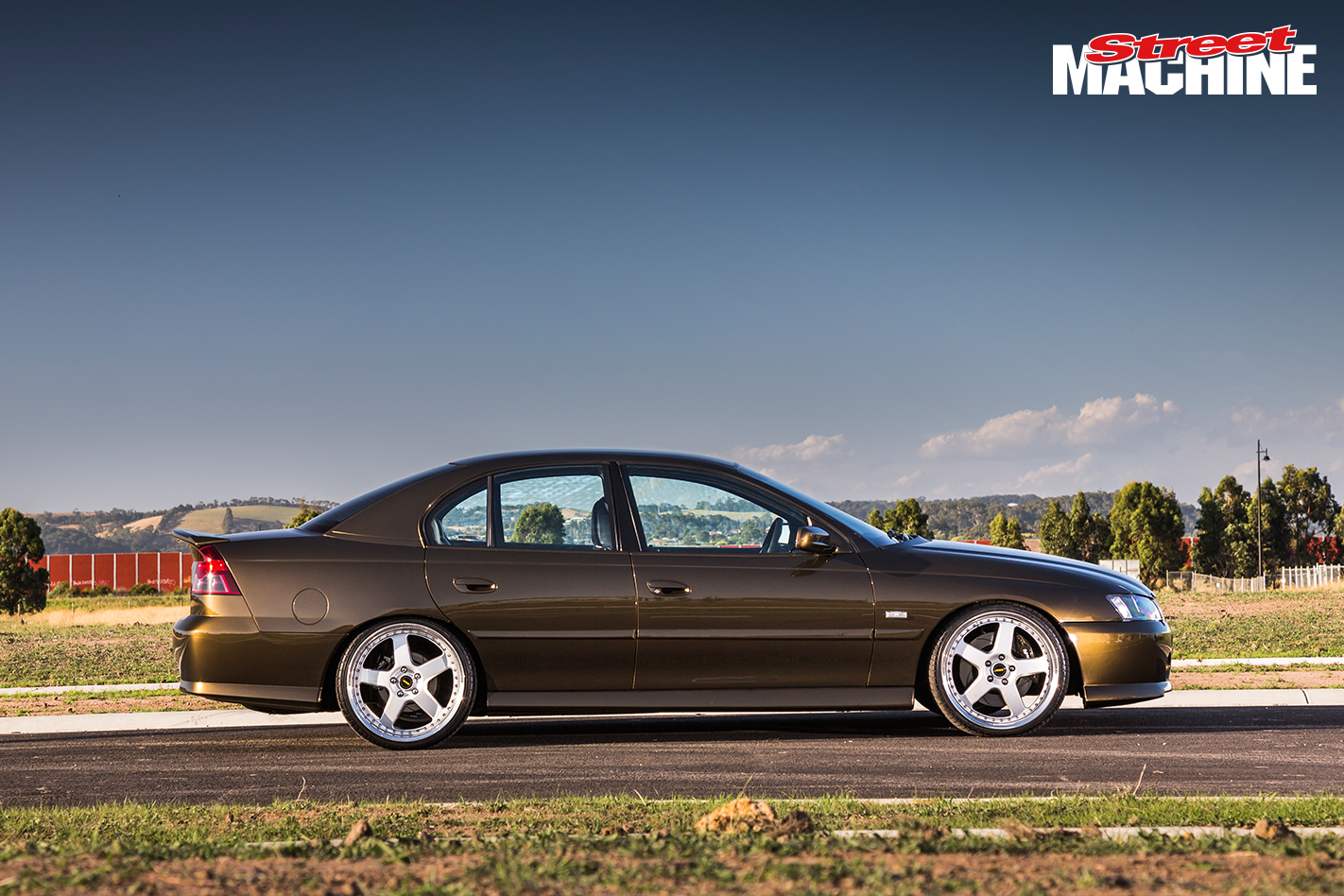 In saying that, Justin’s VY has lost none of the elements that make late-model muscle cars such an attractive proposition in the first place. It still has air, steer and cruise, power windows, a decent stereo and clockwork reliability. But it’s also a massive trophy magnet, and despite its very genuine nine-second potential it still boasts impressive street manners. How’s that for a versatile street machine? 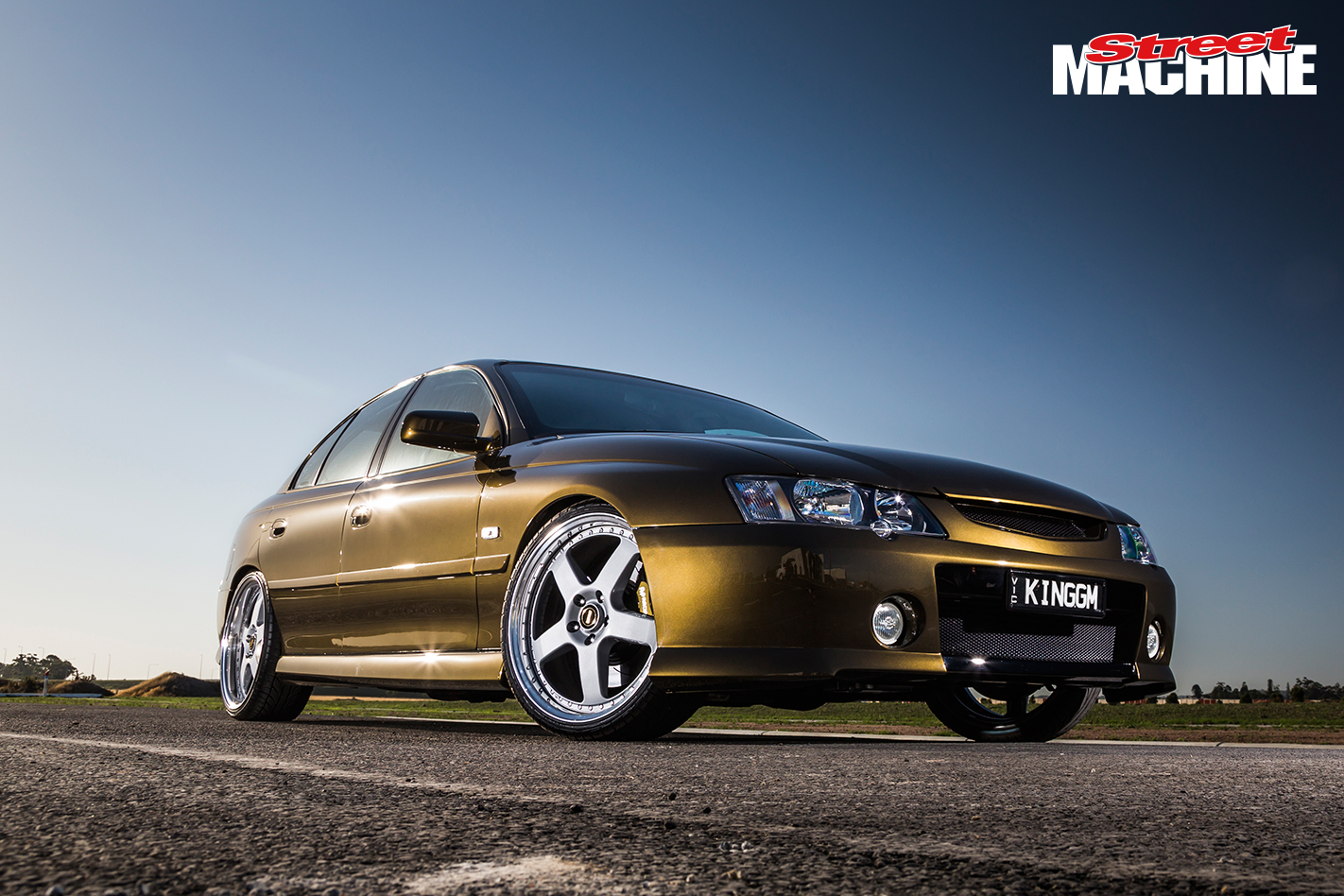 Justin bought the car from Sydney, where it had already been kitted out with some go-fast bits. “I found the car on carsales.com.au, fitted with an ASE turbo kit with a copy T04Z on a stock 5.7L, and a TH400 auto,” Justin says. “I flew up 48 hours later and drove it back to Melbourne, then started tidying it up. It was a bit rough; the paint was faded in spots and it just hadn’t been looked after. We went over it and replaced the plugs, leads, fuel pump, suspension bushes and a few other bits and pieces, then my mate Jason Kenny at LS1PWR Performance retuned it and it went 10.94@138mph.” 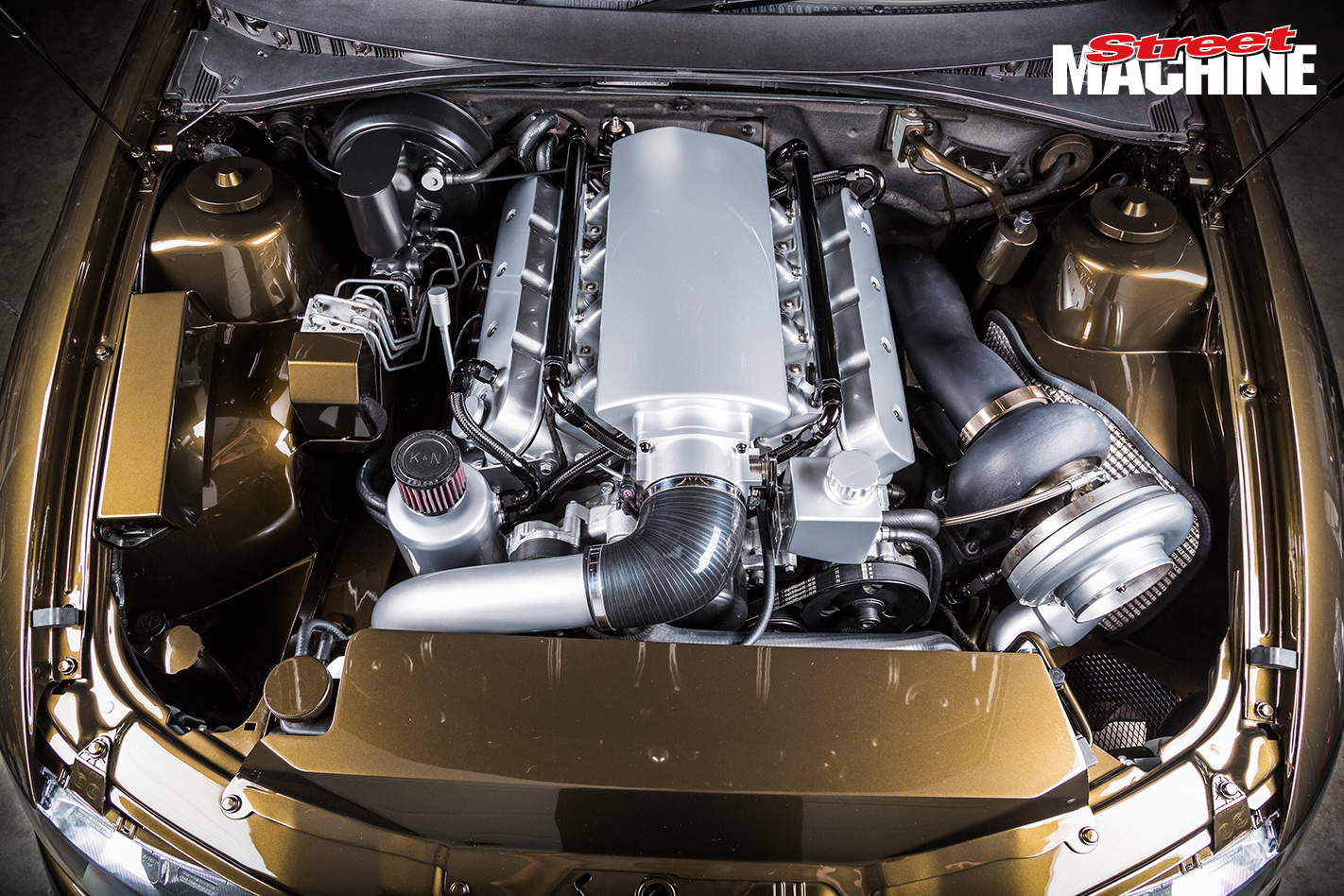 Justin shouted the car some Coulson seats and a set of AP Racing anchors, and it really began to take shape – it even won a couple of trophies. But more power was always going to be on the agenda. Eventually the existing 5.7L LS1 and turbo set-up were sold to make way for an L98-based 408ci stroker and far more sizeable BorgWarner S480 billet snail. 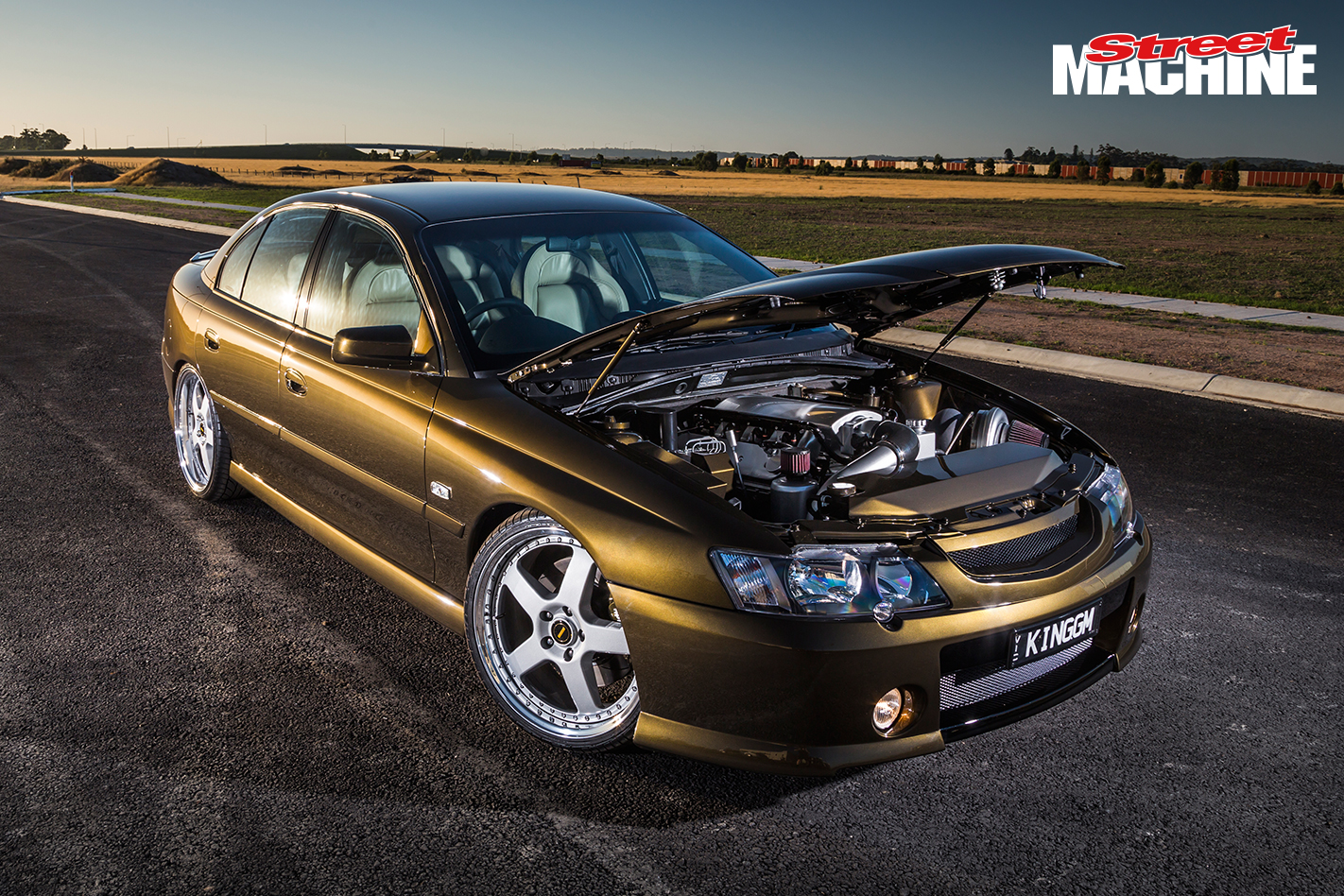 While Jason was busily screwing together the 408, complete with its Callies crank and rods, Wiseco forged slugs and custom turbo-grind camshaft, Justin’s other partner-in-crime, painter Phil King, was putting ideas in his head. “Phil suggested that while the engine was out we could give it a fresh coat of paint,” Justin says. “Then he suggested that if we were going to do that we might as well change the colour. Things really started to escalate from there!” 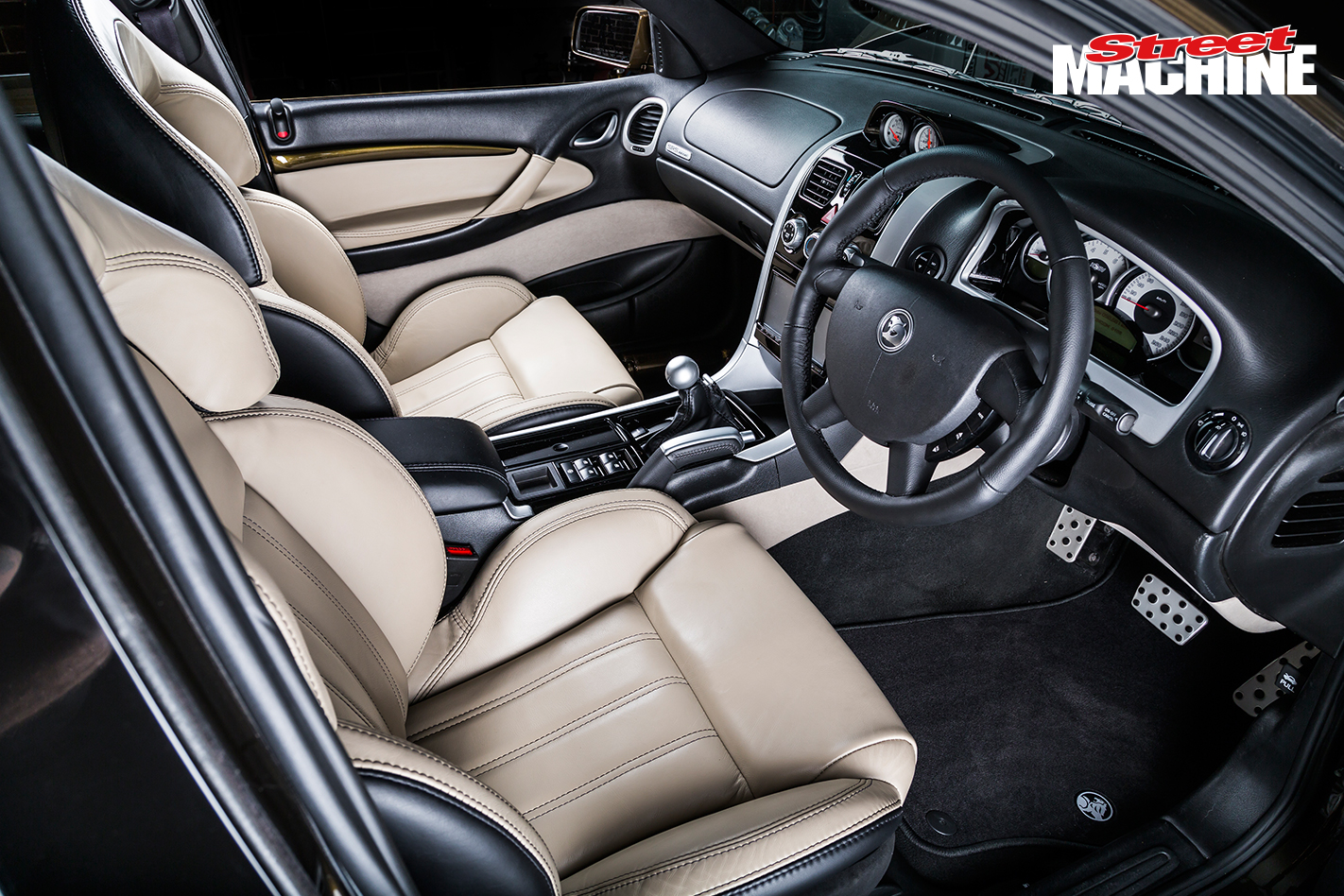 The car was pulled apart at Easter last year, and while Phil got stuck into the bodywork, the interior was sent off to the trimmers. A series of subtle body mods, including the shaved aerial, deleted exhaust and towbar cut-outs, smoothed and filled bumper bars and a custom mesh grille, really help to set the car apart from the masses, while showcasing Phil’s plastic-welding skills. 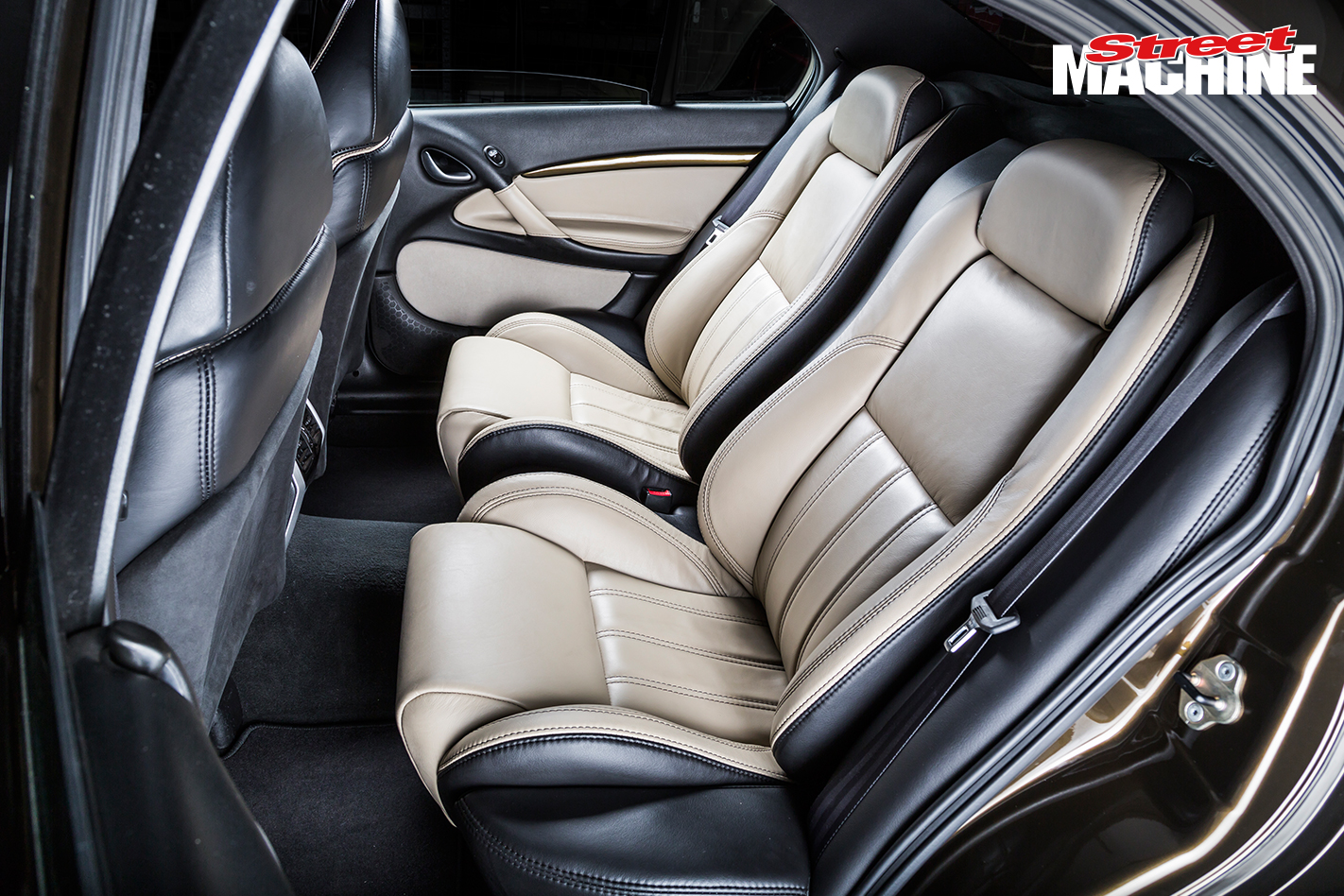 Likewise, the engine bay was a hive of activity during the build. Late-model Commodores are notoriously difficult to get right in this department, due to the huge amount of wiring, engine ancillaries and general untidiness from the factory, but Phil nailed it. Every hole and imperfection was filled and smoothed, wiring was hidden and a scallop was added to accommodate the turbo. Welds were smoothed on the fabricated Precision manifold, catch can and power steering reservoir, and along with the billet rocker covers, were painted silver. 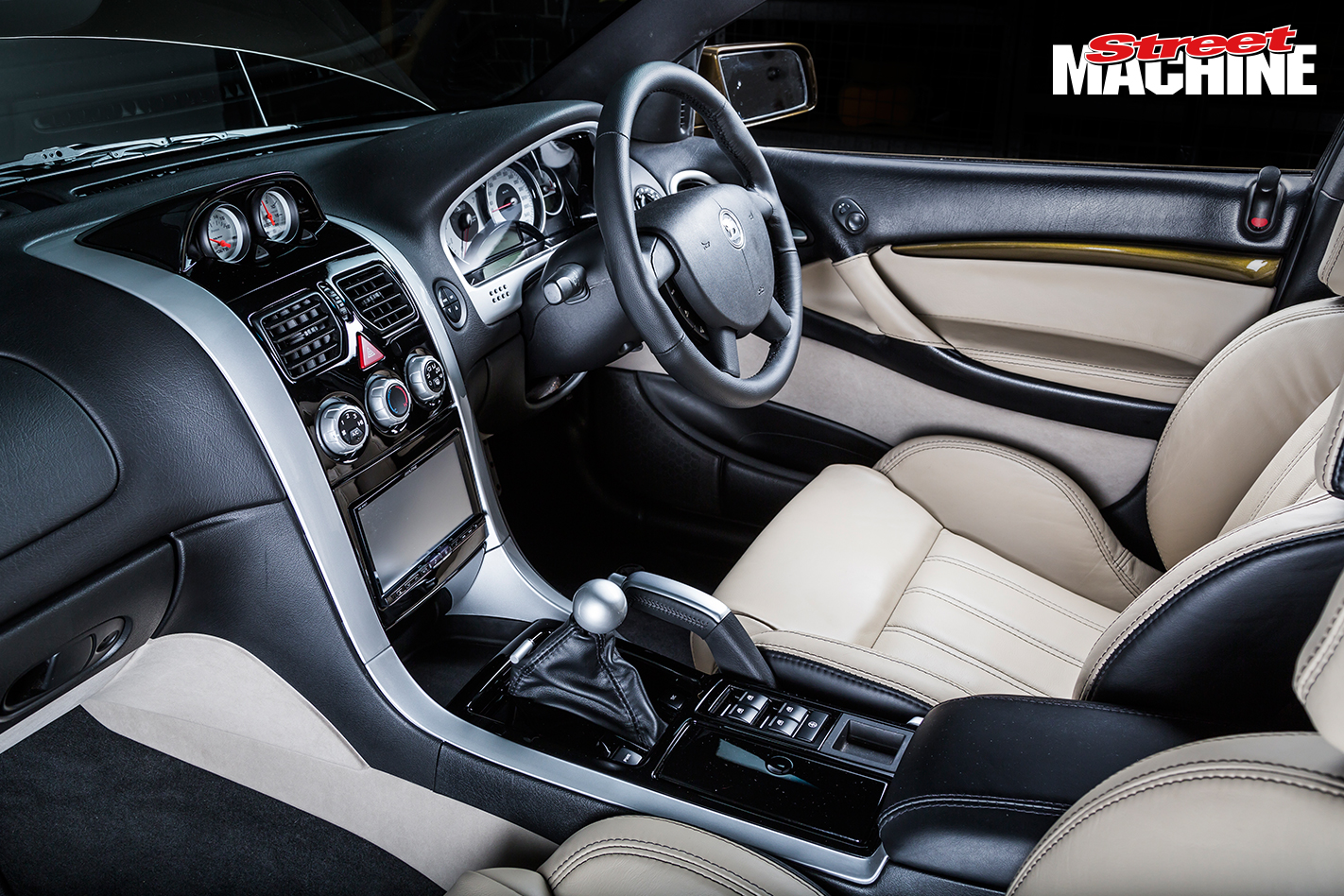 At first, Justin had his heart set on BMW Atlantis Blue for the body colour, but Phil insisted that it looked like a fleet colour, and instead cooked up a custom-mixed metallic bronze, which the pair dubbed ‘Madilena Mica’ after Justin’s daughter. Incidentally, Madilena’s arrival had a fair bit to do with why Justin went all-in with the Commodore. “My wife Anne and I decided that it had to be done, because I knew that as Madilena grew up I wouldn’t have time for building cars and I wanted to have something nice in the shed,” Justin says. “Anne loves the car and drives it fairly often; I need to thank her for letting me blow the budget!” 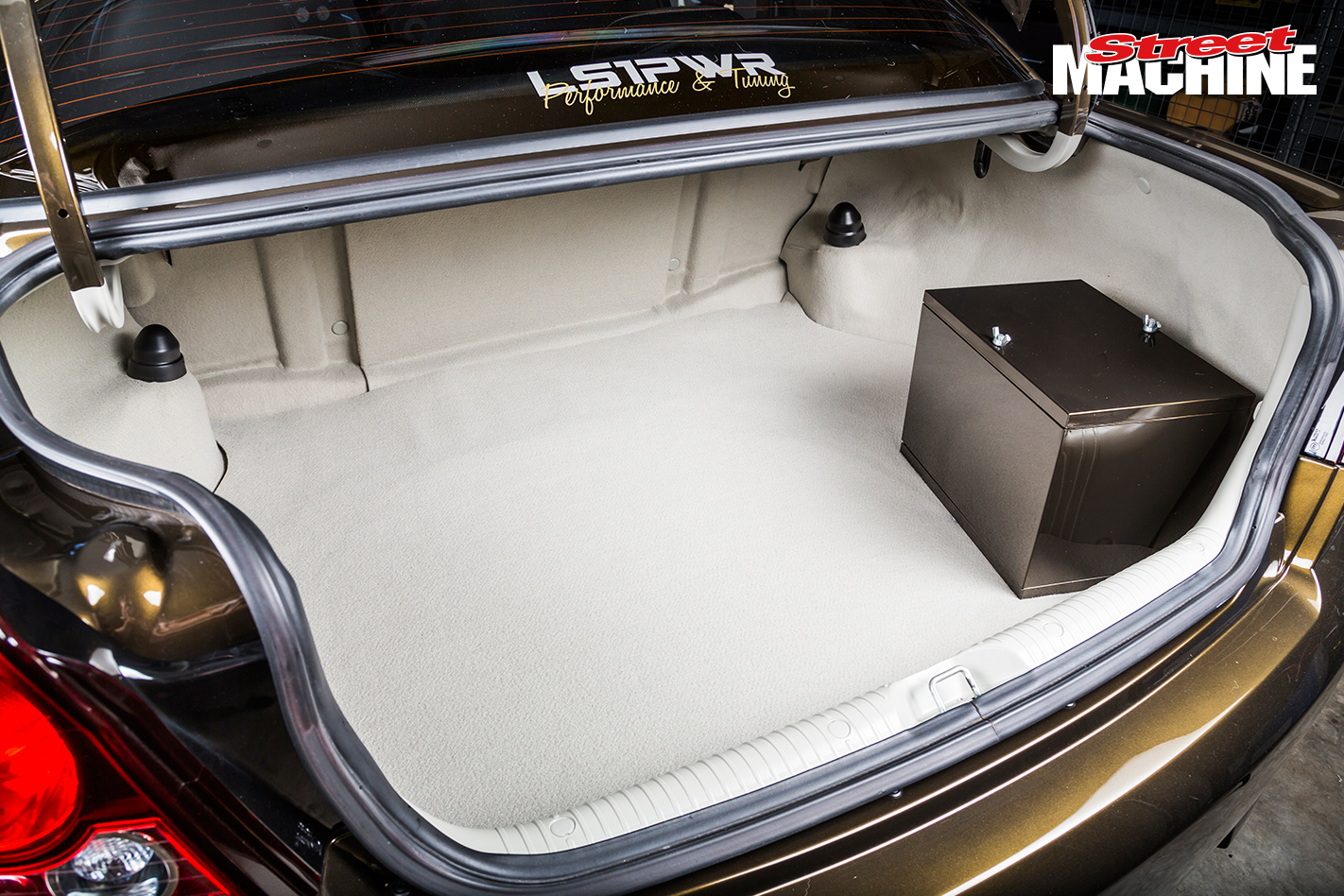 With the engine and ’box reinstalled and the fab work on the new turbo system complete (thanks to Jason’s right-hand-man Daniel Deering), the interior work looked like it might jeopardise the Summernats deadline. Luckily Danny at SOC Audio & Upholstery stepped up to the plate, took ownership of the job and made it his mission to get it completed in time. The cockpit has a classy European feel, with the aforementioned Coulson front chairs complemented by an HSV GTO rear, lavishly trimmed in sumptuous shale and black leather. WL Statesman door cards were trimmed to match, while a host of smoothed and painted components bring that killer exterior hue indoors. 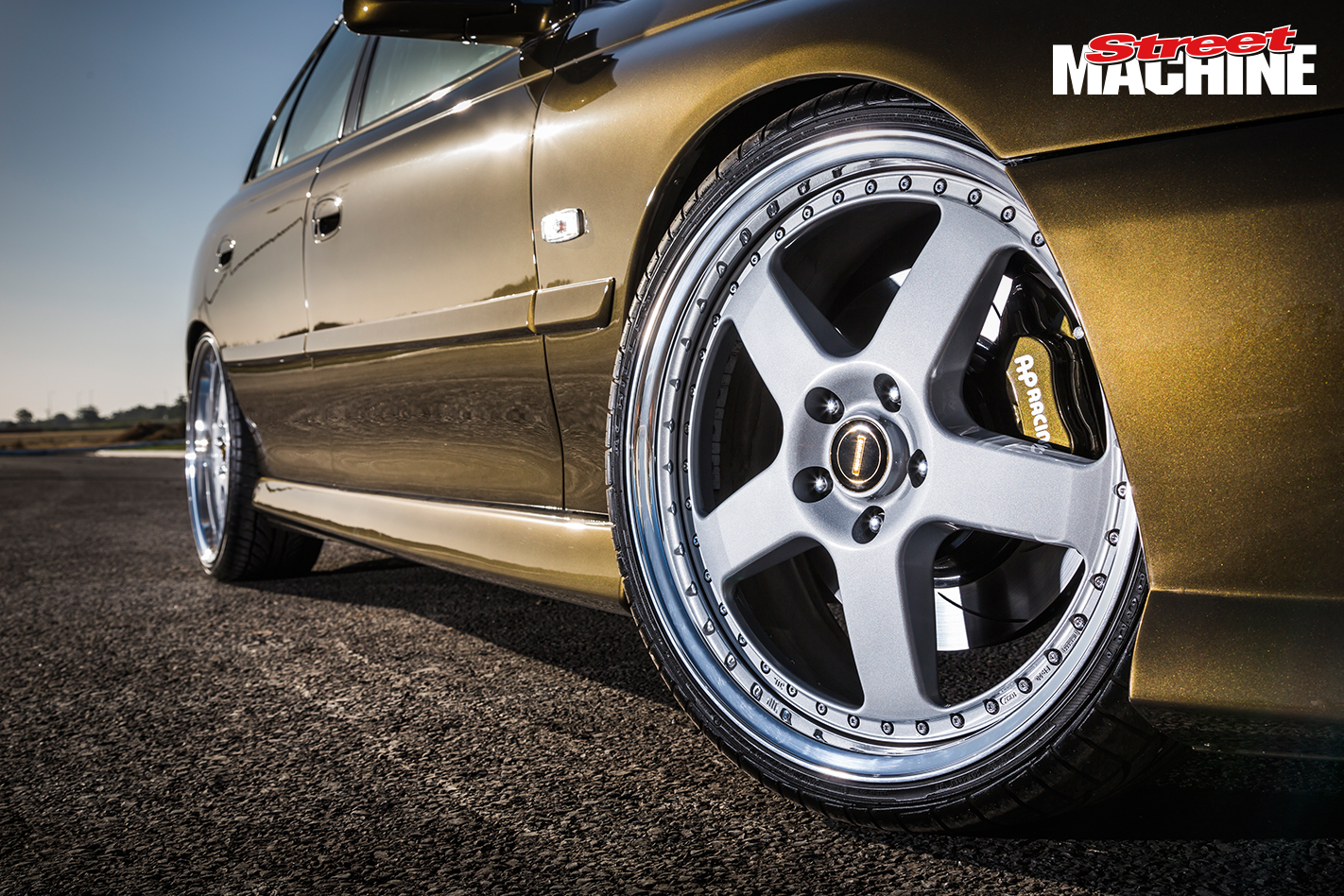 As the team neared the pointy end of the build few things were going right, and Justin was very close to chucking in the towel. “Daniel got us all together and gave us a big inspirational speech!” he says. “He revved us up and that’s what finally got it across the line before Summernats.” 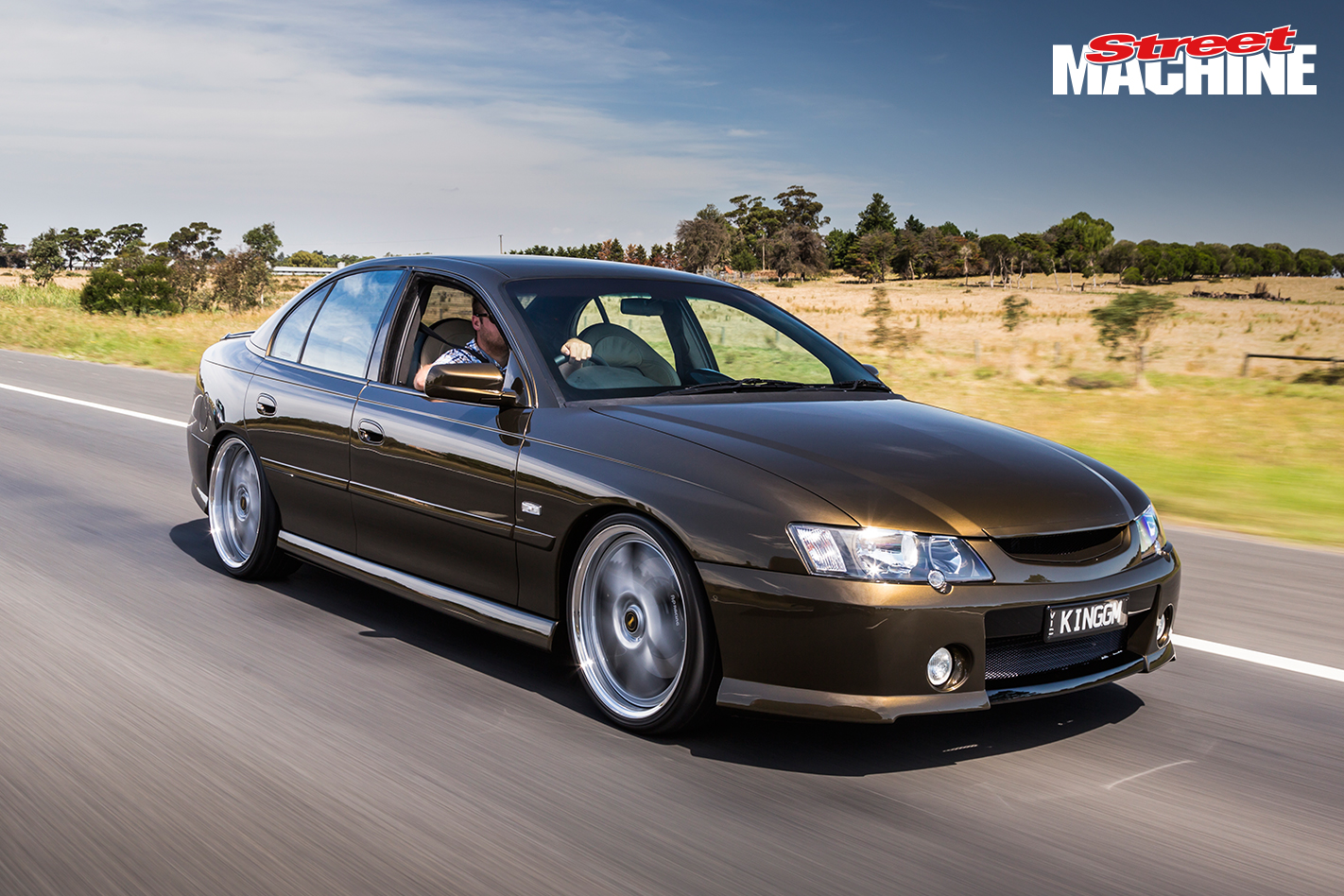 As soon as the car was inside the EPIC gates, all the hard work began to pay off. It went on to win Top Sedan, Top Standard Paint, 2nd Top Body and 3rd Top Engine Bay, and generated a stack of positive feedback. With over 500rwhp on tap at a lowly 8psi on pump juice from the new combo, Justin is hoping for around 800rwhp and nine-second timeslips on E85 once tuning is finalised. But for now he’s intent on enjoying his creation by cruising and showing it. 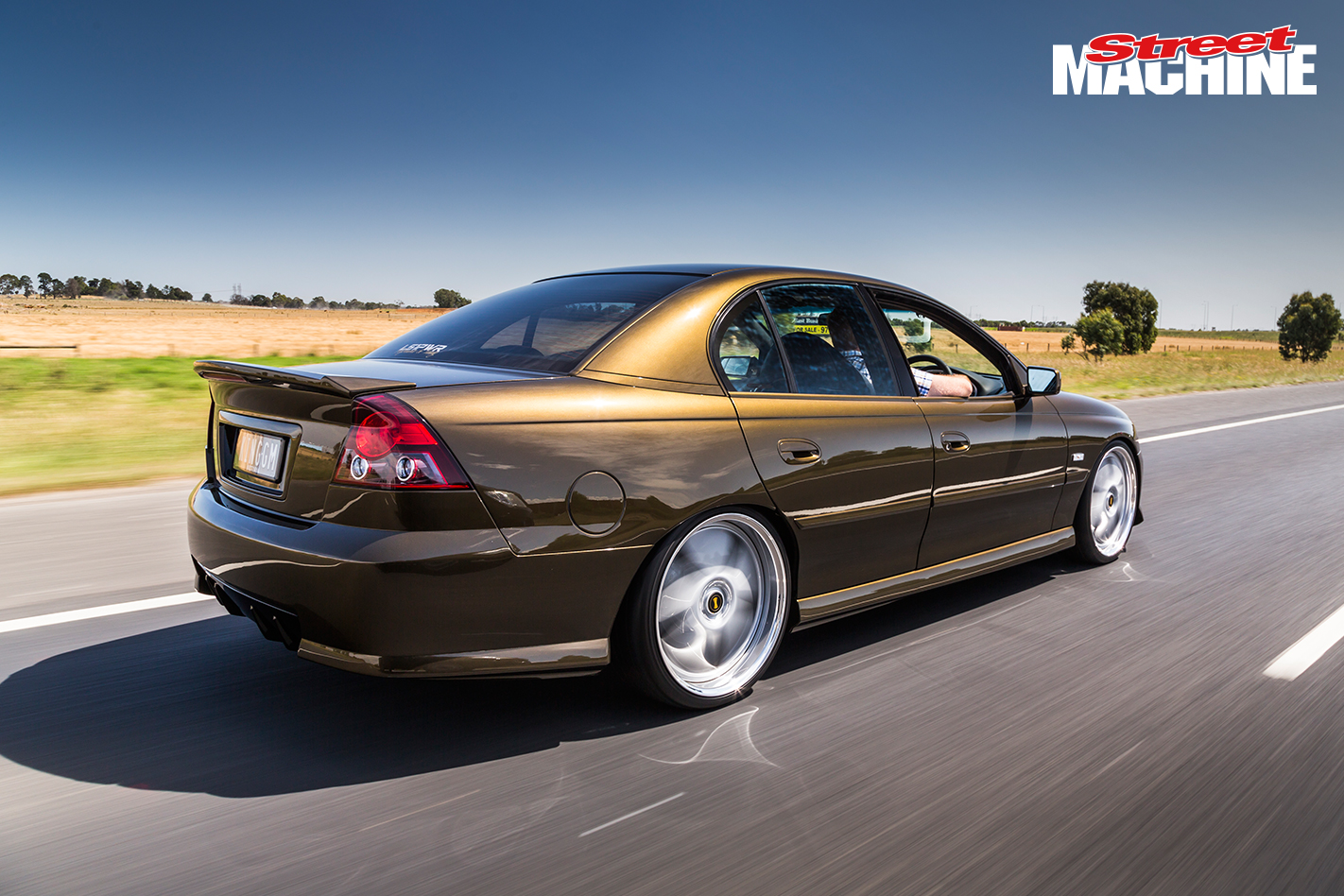 “Phil, Jason and myself used to sit around when we were younger, drinking Jacks and dreaming about building a car like this. It was great to finally be in a situation where I could let them loose,” Justin says. “The whole car was built in mine and Jason’s garages – it’s never even been on a hoist. Their skills and attention to detail were absolutely second to none. I had the best two guys on the job.”