THIS article on Paul Calleja’s Ford Cortina was originally published in the January 2008 issue of Street Machine.

PAUL Calleja’s 1977 TE Cortina has been through the ringer over the past couple of years to get to this stage. Indeed, its current guise is due to a bit of an internal disaster while flying down the quarter mile. “I was halfway down the track and the number six conrod went through the block,” he says. “But the good news is I still managed to run a 12.01 while idling across the finish line.” 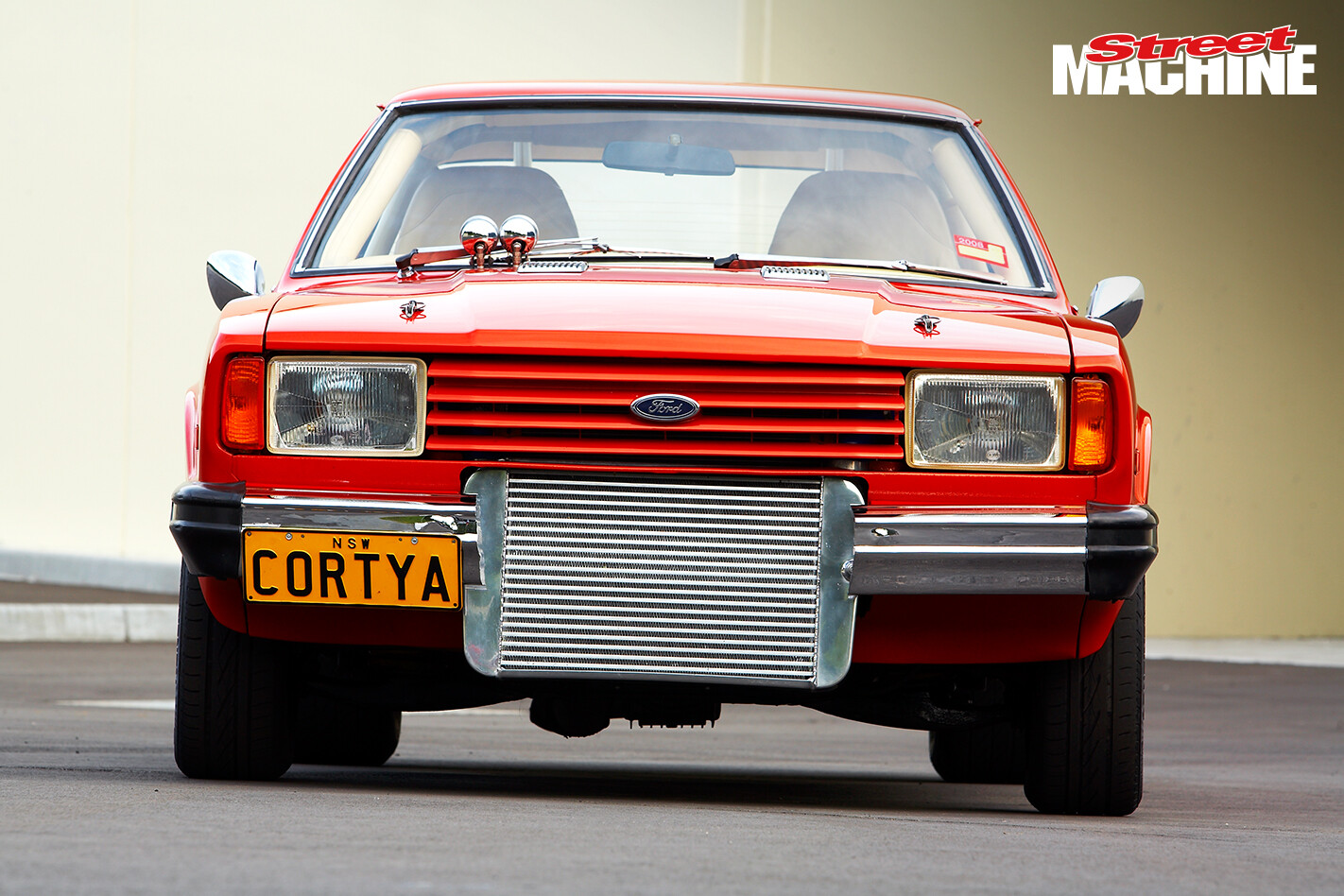 Many projects that find their way onto the pages of Street Machine start with a hard luck story and end up being something greater than their owners ever expected or intended. This definitely applies to Paul’s Cortina as every aspect has something to offer.

If we go back to the beginning, when Paul bought the car from his sister, you start to understand the personality behind the masterpiece and why he’s gone as far as he has. There’s no doubt Paul’s very attached to his TE; he’s owned it for more than nine years and it looks like there’ll be a few more. 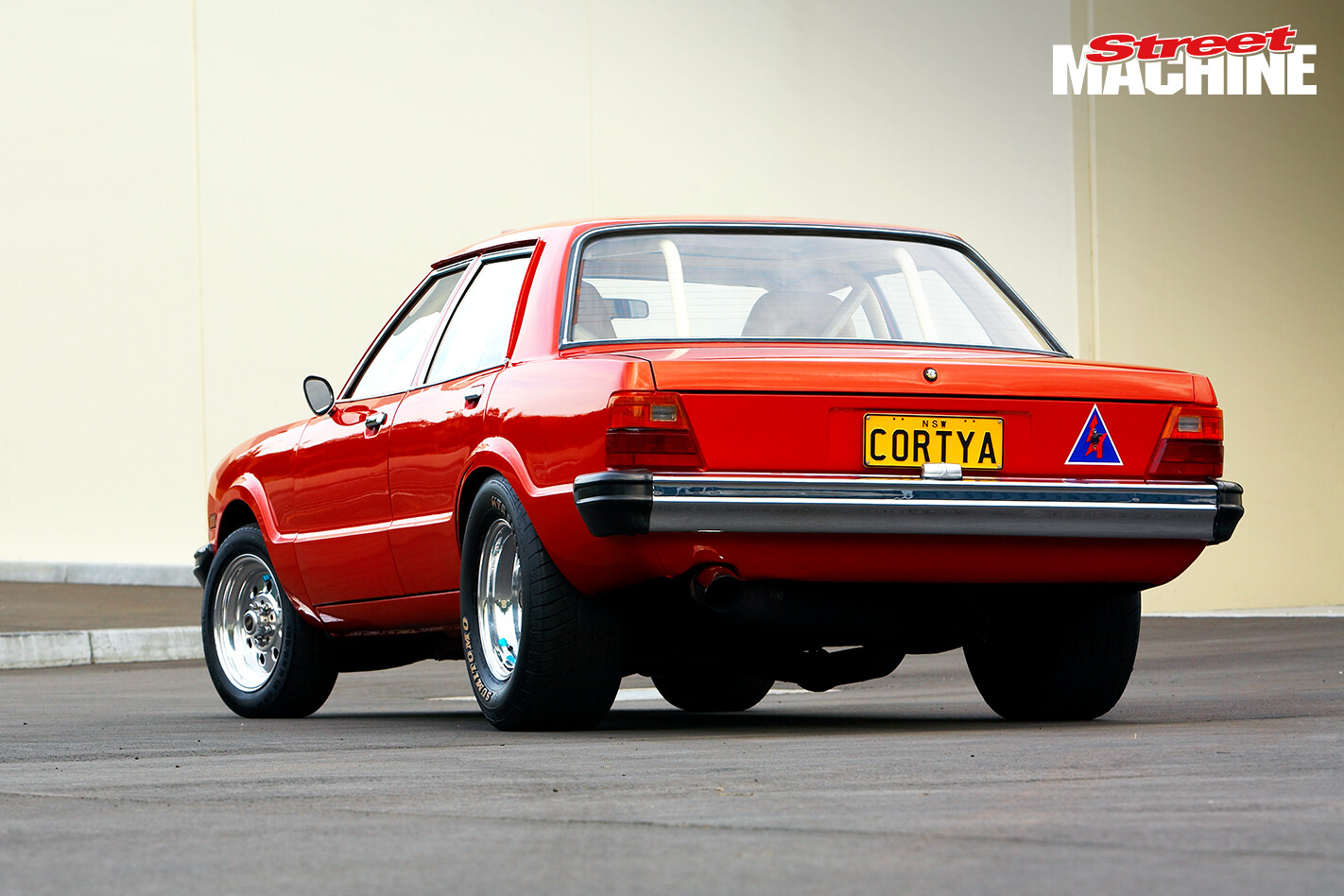 “I had to buy it from my sister,” Paul says, “as I wanted to build a car that was in original condition and really take it to the extreme. Keeping the Cortina in the family was a bonus; I couldn’t see that go to someone outside the family. I remember when I was at high school and I used to get paid by my sister to polish the car.” Yep, Paul’s a bit of a family man and he treats his car like it was his own flesh and blood, which explains why it’s in such good nick. That said, the car was never this good in the early days — what would you expect for $500 dollars anyway? Paul had already bought himself a Cortina however, but for $1700 it’s a purchase he’d rather forget, though “it did have an excellent XF motor in it,” he says. “The bodywork was tragic, it was held together with chicken wire, it was a shocker. So when my sister offered me this car for $500 it just made sense to take it and transfer all the good bits across.”

Being young and over-excited by the freedom of having his licence was too much for Paul and he got a little too aggressive on the pedal. “Yes, I lost my licence for neg driving,” he says. But the positive to it was that he had a heap of time to customise the Cortina, and you only have to look at the results. “This is the second rebuild in five years,” Paul says. “This time around I wanted to be more original, with a little class. The first started in 2000 and it wasn’t registered ’til 2003. The engine in the first build was a standard block with forged pistons and standard XF head [EFI]. The car was painted Kawasaki Green with velour interior.”

It was at this point, when Paul had the car finished after the first build, that the XF’s No 6 conrod went walkabout. “That was when I got the inspiration to take the car to another level,” Paul says. “I wanted to go one step further and my ultimate goal is to run a nine-second quarter in it.” With the car off the road, he began to strip her down to a bare shell, and while he was doing that he thought about what kind of car he wanted to build. “I knew I wanted to drag race it so I concentrated on that aspect. But I wanted the car to stand out a little.” Which is why the car was resprayed in PPG Mandarin Orange by Craig at Woonona Smash Repairs. 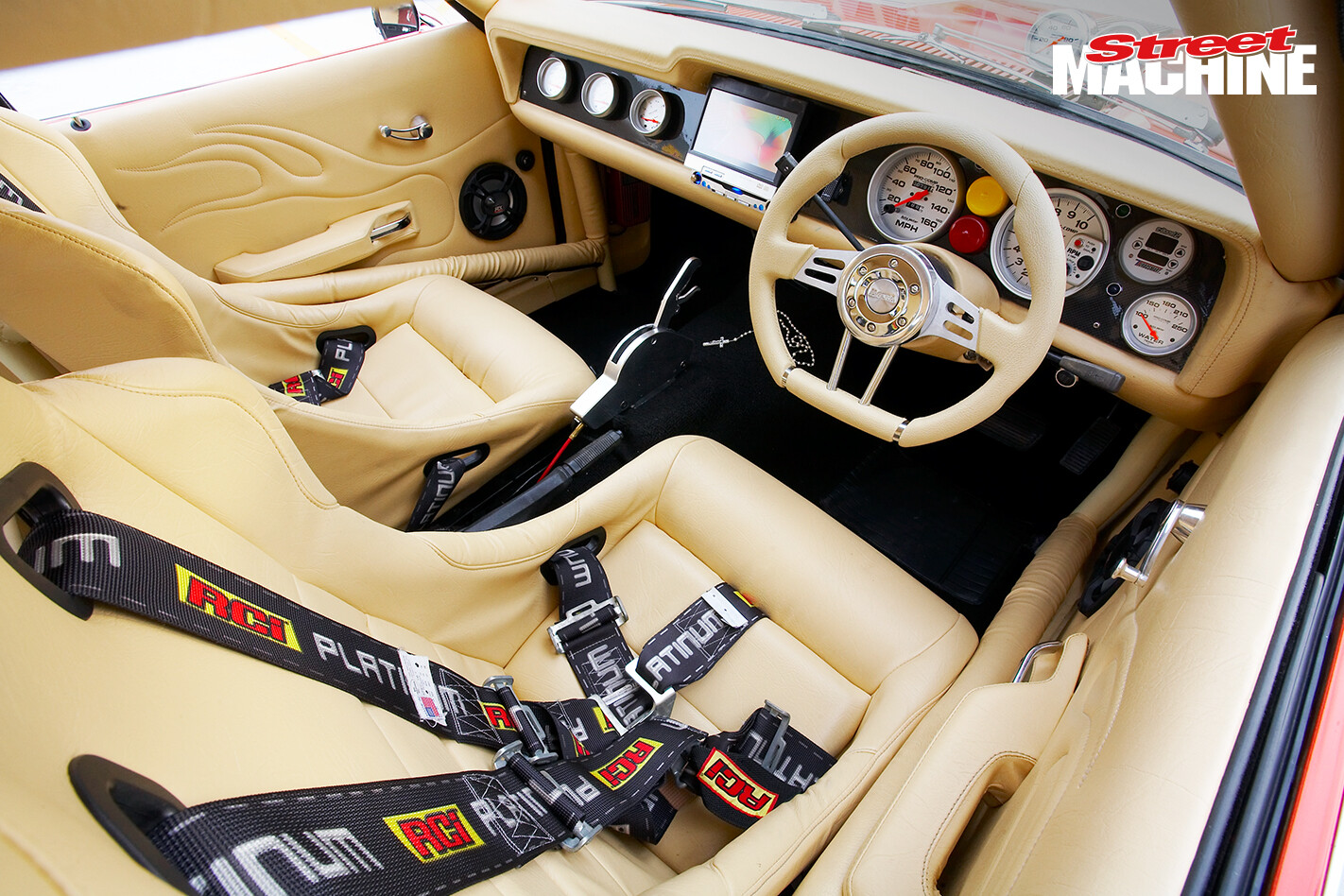 With the racing aspect in mind, safety and speed were of utmost importance so an eight-point rollcage was added. Knowing the weakness of the previous XF motor, Paul consulted former Bezerkly Automotive employee Paul Testa. He bolted the previous engine together and has been building performance motors for some time. One of the points he concentrated on for this build was a bulletproof bottom end. Interestingly, this 250ci Ford block uses a 200ci crank. “We effectively de-stroked the engine and it now revs a lot harder and we’ve used strengthened Argo rods,” Paul Testa says. The block uses a Crossflow manifold, Rochester injectors, Ross pistons, a Camtech cam and a nice-sized Garret turbo with exhaust escaping via a Variflow Technology system. 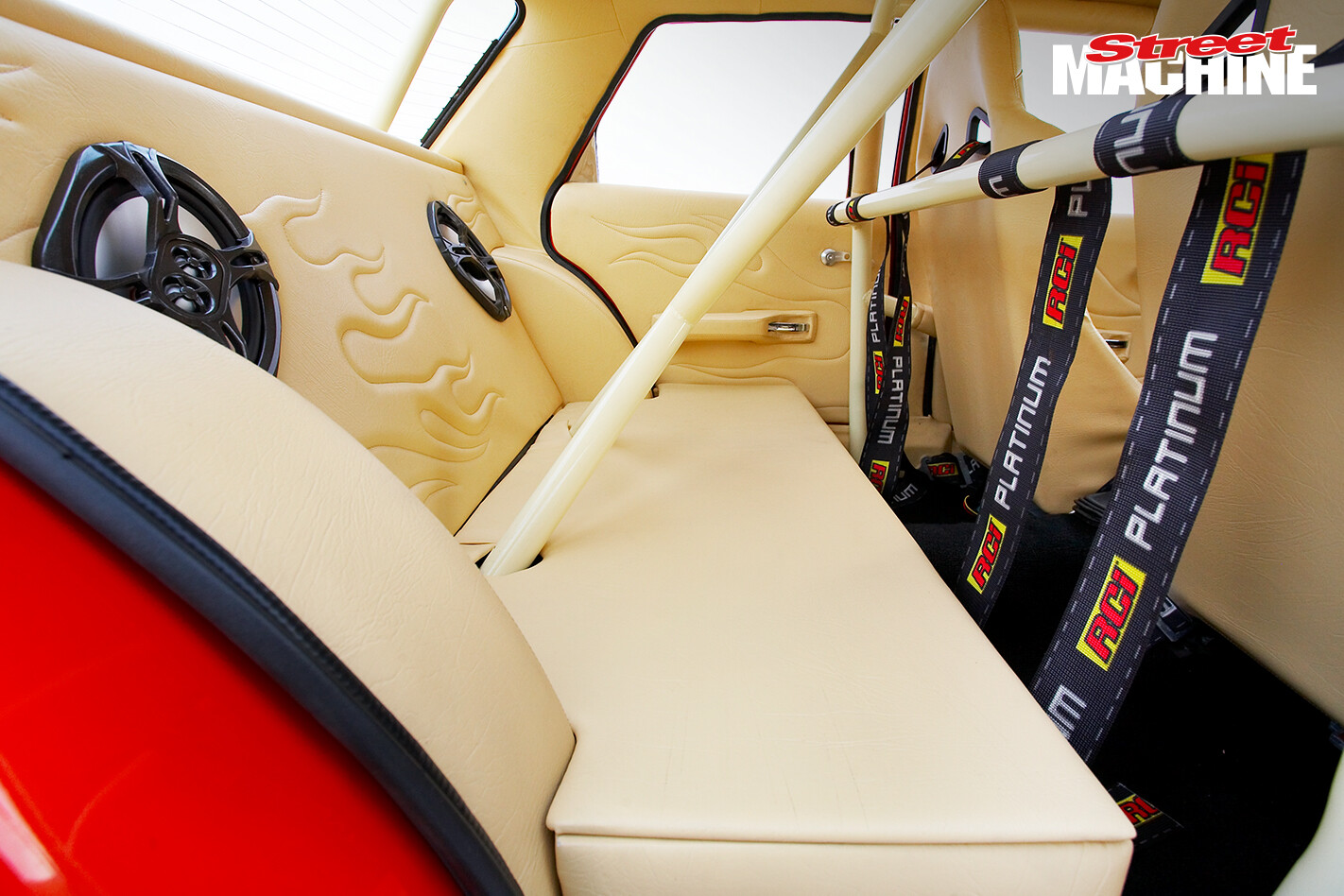 On the chassis dyno the motor made 467.8hp on 15psi. “Enough to run a nine-second quarter,” Testa says. With a C4 full manual ’box, a custom four-inch tailshaft and a nine-inch diff with Strange full spool and Moser 31-spline billet axles the car should be able to hand a hell of a lot of torque through to the Weld racing rims and on to the black stuff. 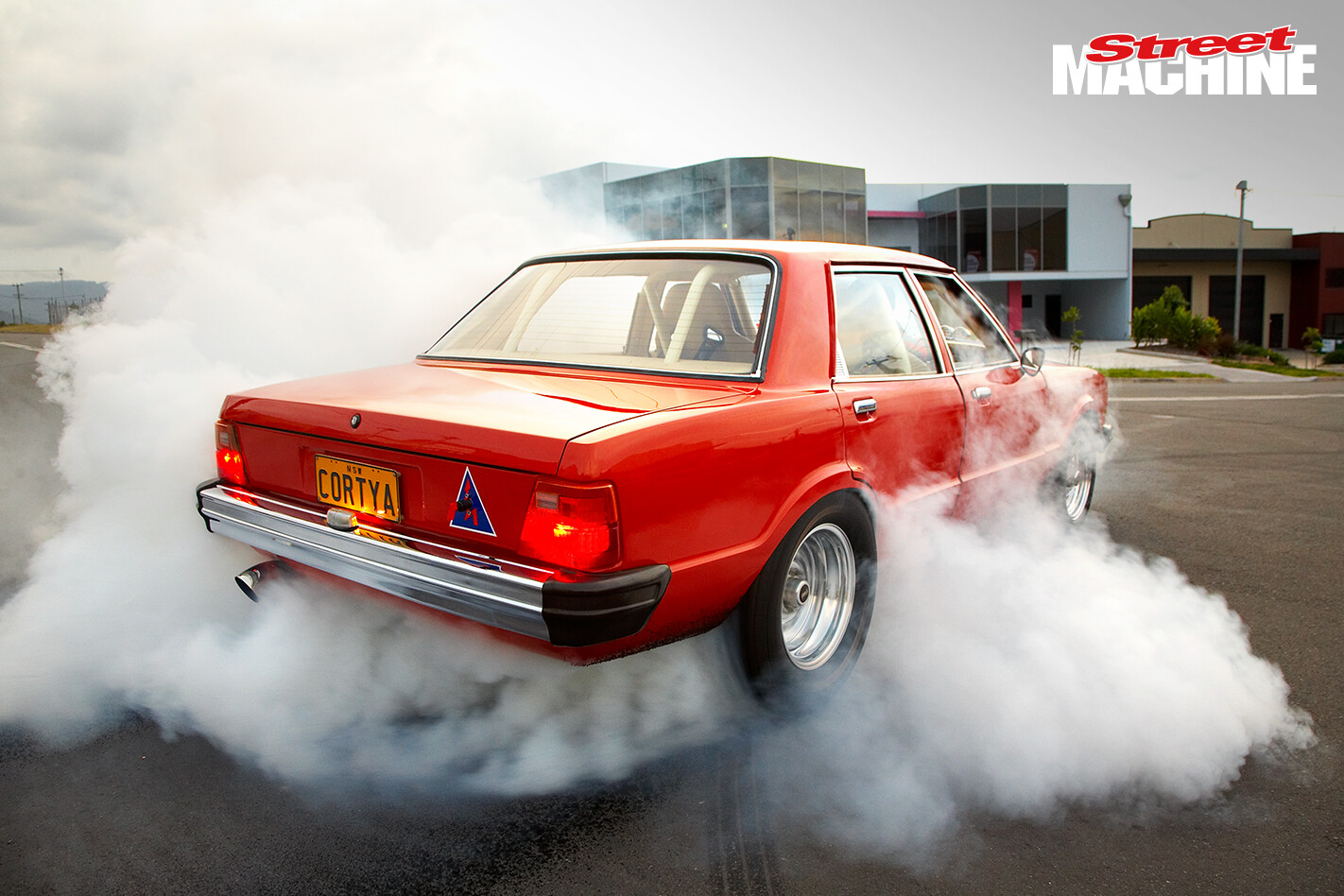 Still, we wondered why Paul went with the turbo six. “I’m a turbo fan and there’s nothing a six can’t do. I’ve spent 12 grand and it makes more power than some V8s.” We asked Paul Testa the same thing. “Oh mate, you can’t go past a turbo V8 but dollar-for-dollar you’ll get a better performance motor from a six. Spend 10 grand on this or a V8 and you’ll find better performance with the six.”