YOU’VE probably heard this one: no matter how hot she is, somewhere, some guy is tired of her crap. ‘She’ could be a car. No matter how cool or fast it might seem to you, the owner may well be bored with it. That’s why Stephen Gorsevski went the whole hog on his nine-second Torana. 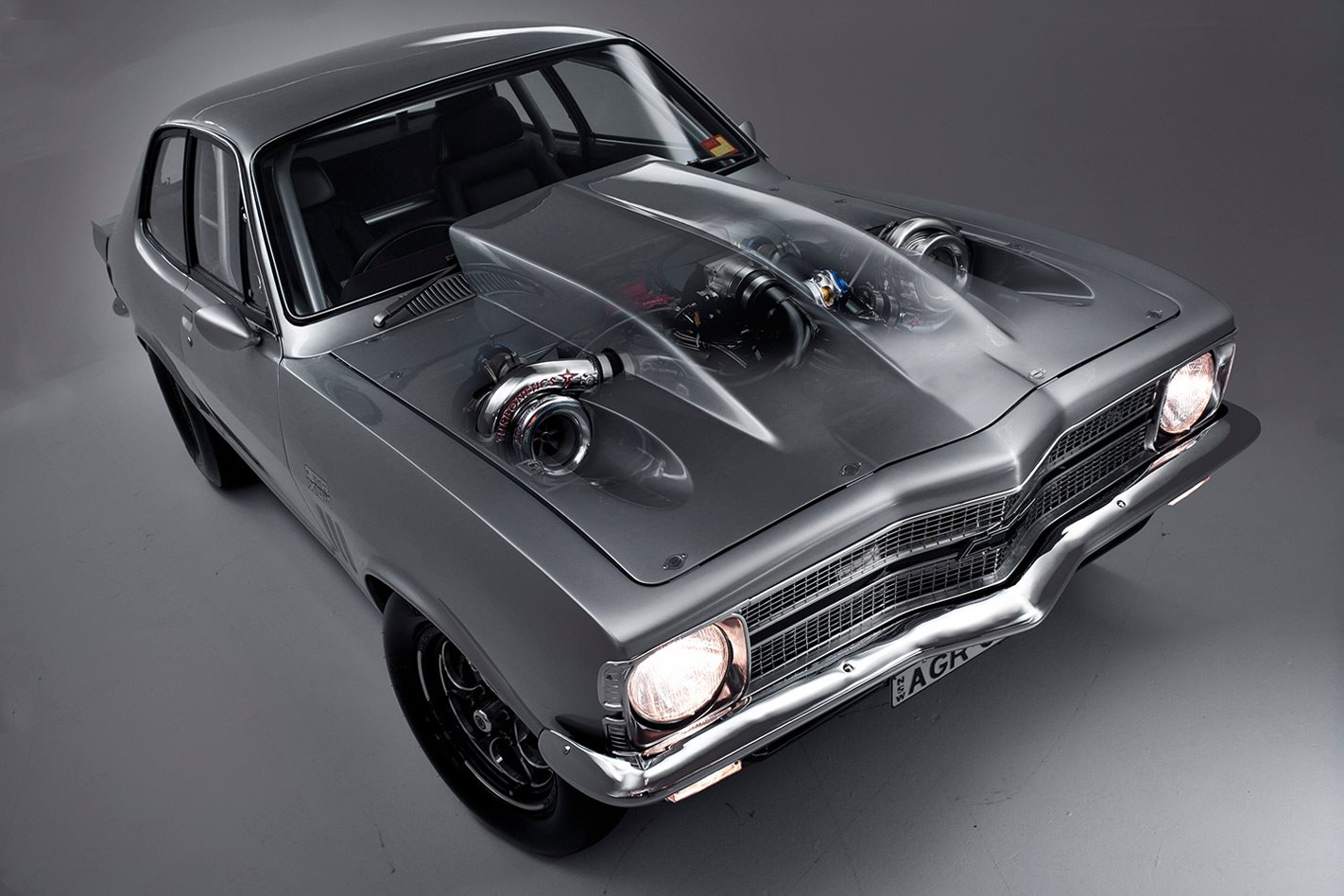 “Running 9.8 wasn’t doing it for me any more,” Steve says. “And I was sick of the street. The cops don’t allow these cars on the road and I drive for a living, so I need my licence.”
He made his big decision in 2007 but we need to rewind to 2004 to find where it all started. Back then he decided life wasn’t complete without an LC coupe in the shed: “Two-door LCs are my favourite muscle cars; I had to have one.” 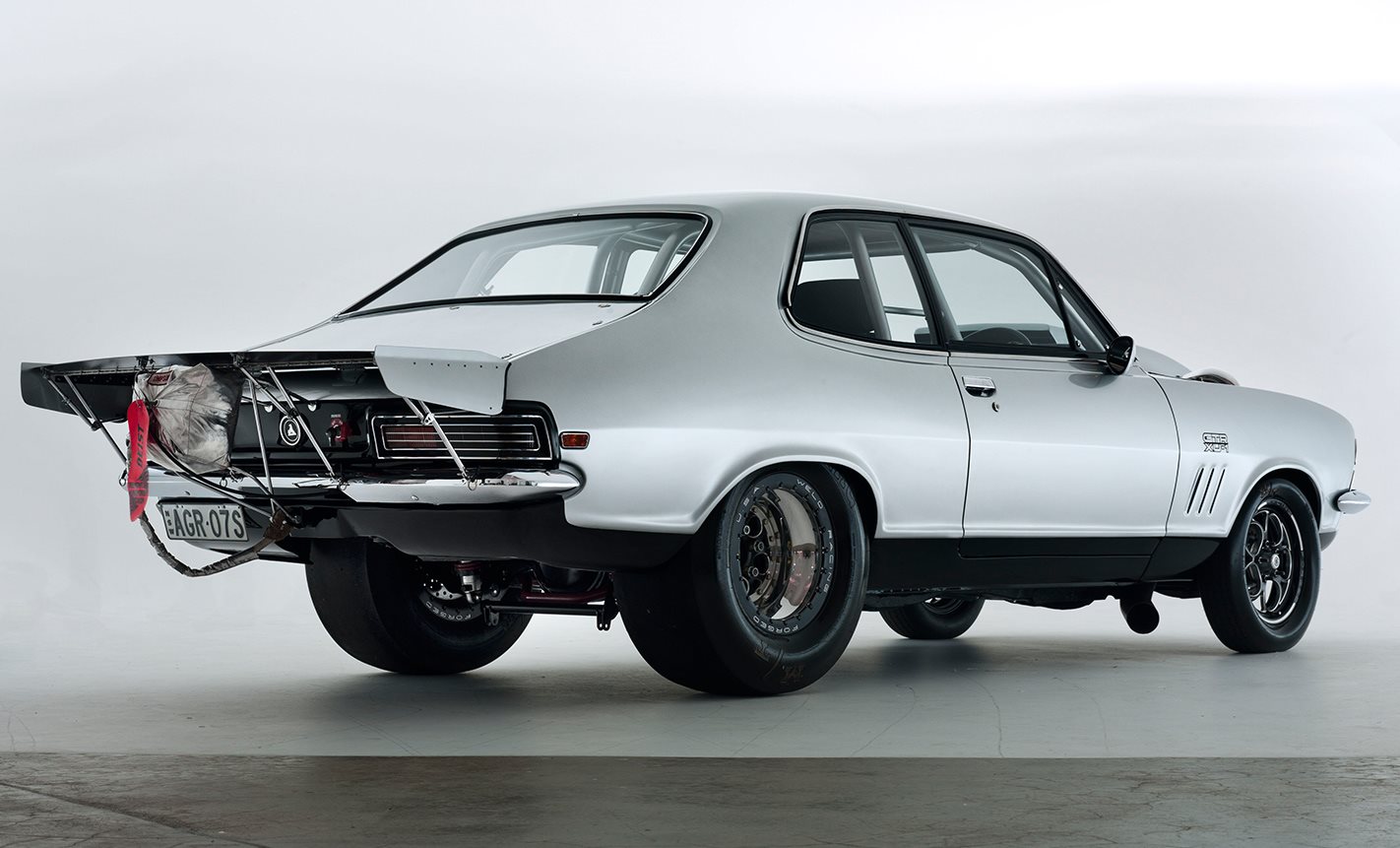 It may wear ’plates but Steve is under no illusions about the streetability of his Torana. “I’ve taken it out but you can’t drive it. There’s just too much power,” he says

He found a suitable steed in Wollongong. It was a bare LC GTR shell with minimal rust and no mods but other than the doors, there wasn’t a single part on it. A two-year resto ensued and out the other end popped a mini-tubbed silver LC with red leather trim, gold Magnum wheels and a healthy little 370-cube Chev capable of running 9.80sec passes at 138mph aspirated. 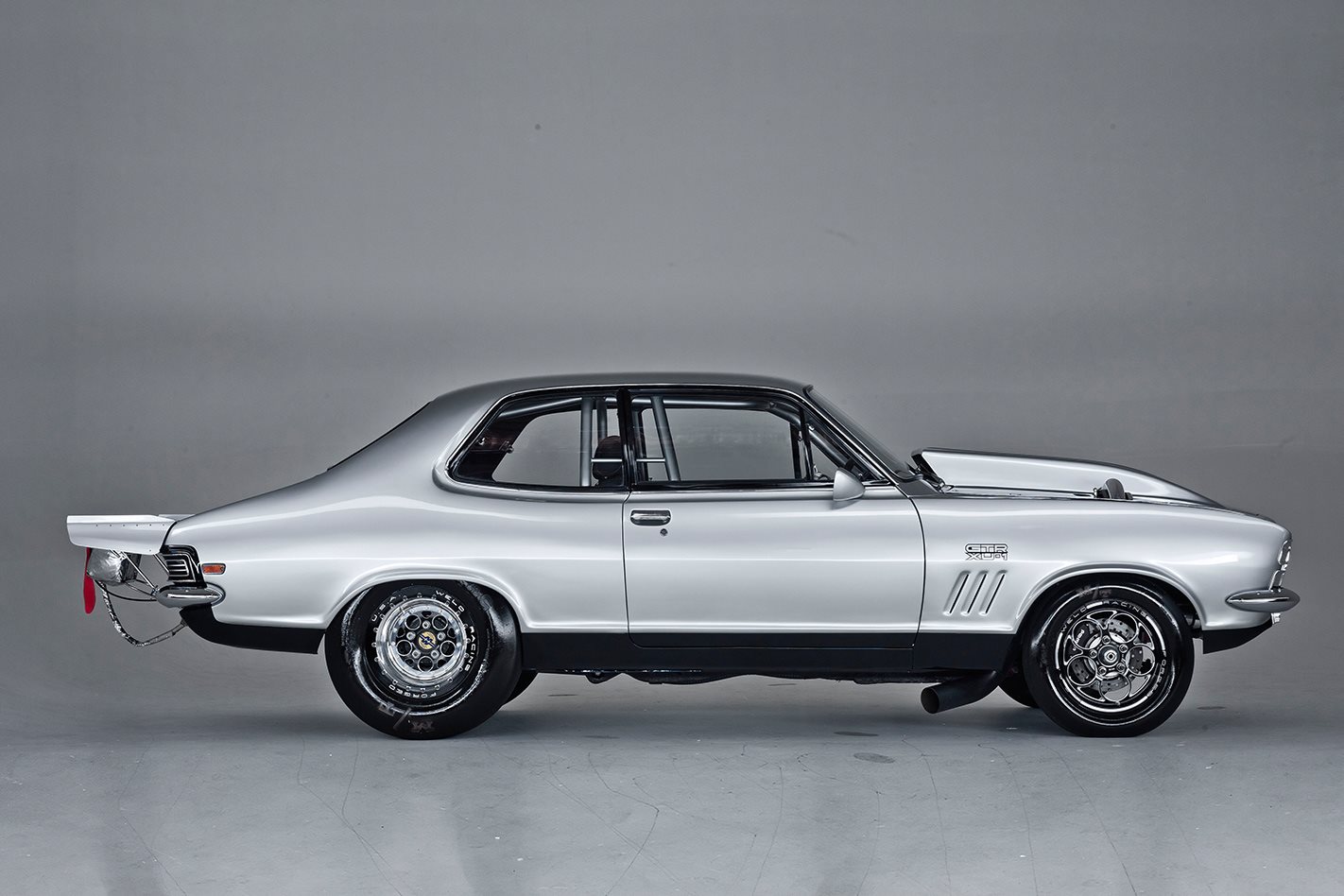 But as we’ve seen, familiarity leads maybe not to contempt but certainly to boredom. Running nines would be great for most of us but Steve found it repetitive. Then he saw what the cool kids were doing and reasoned that twin turbos might inject some excitement back into his life. 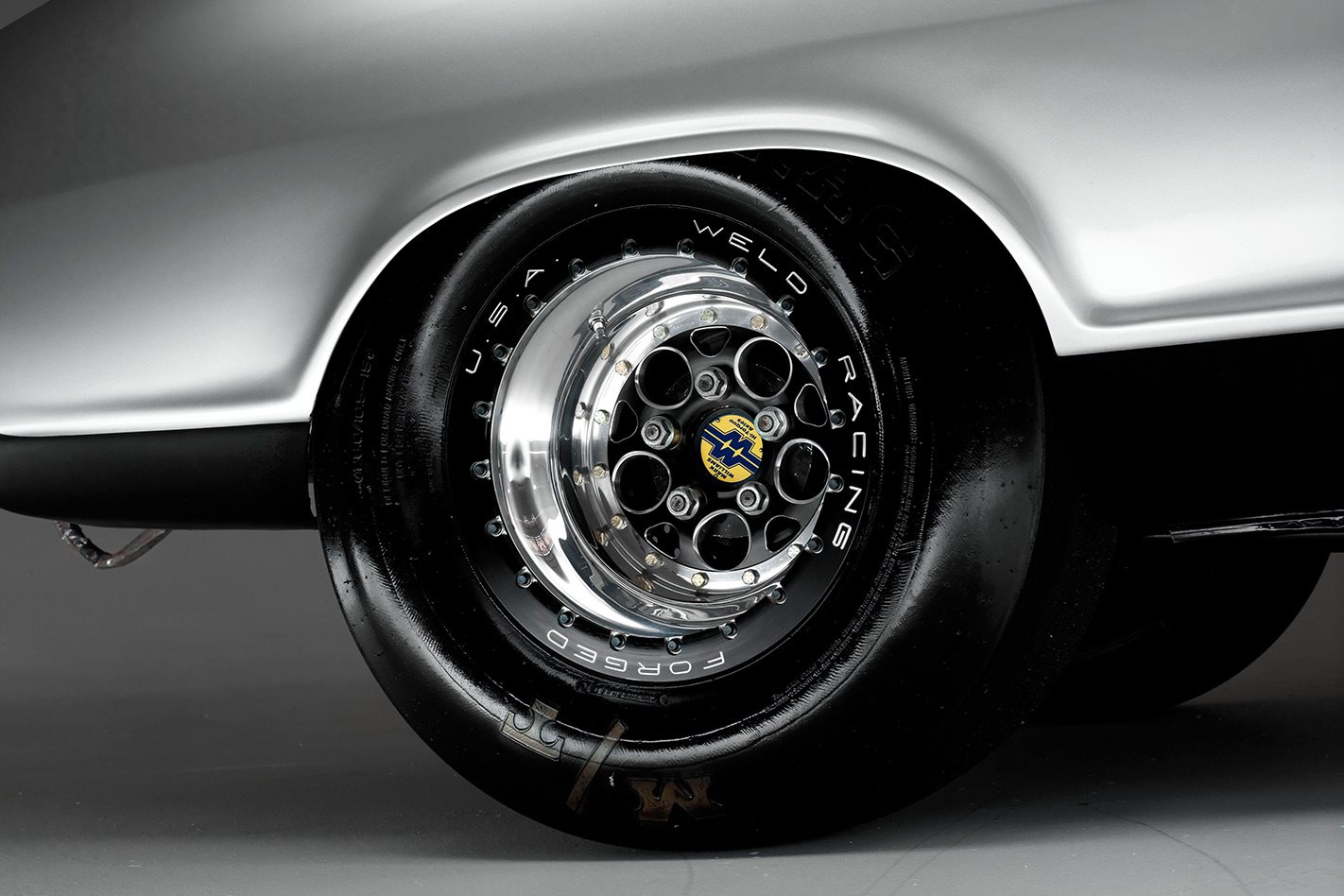 “A twin-turbo V8 was something I always wanted to do,” he says. “So I did some research on engine builders and Bill at BK Race Engines was the man for the job. He dominates in every application — turbo, nitrous, aspirated and blown. I’m so glad I made the right choice.”

To finance the new combo, Steve stripped the car and sold off the stuff he wasn’t going to need — which was just about everything. 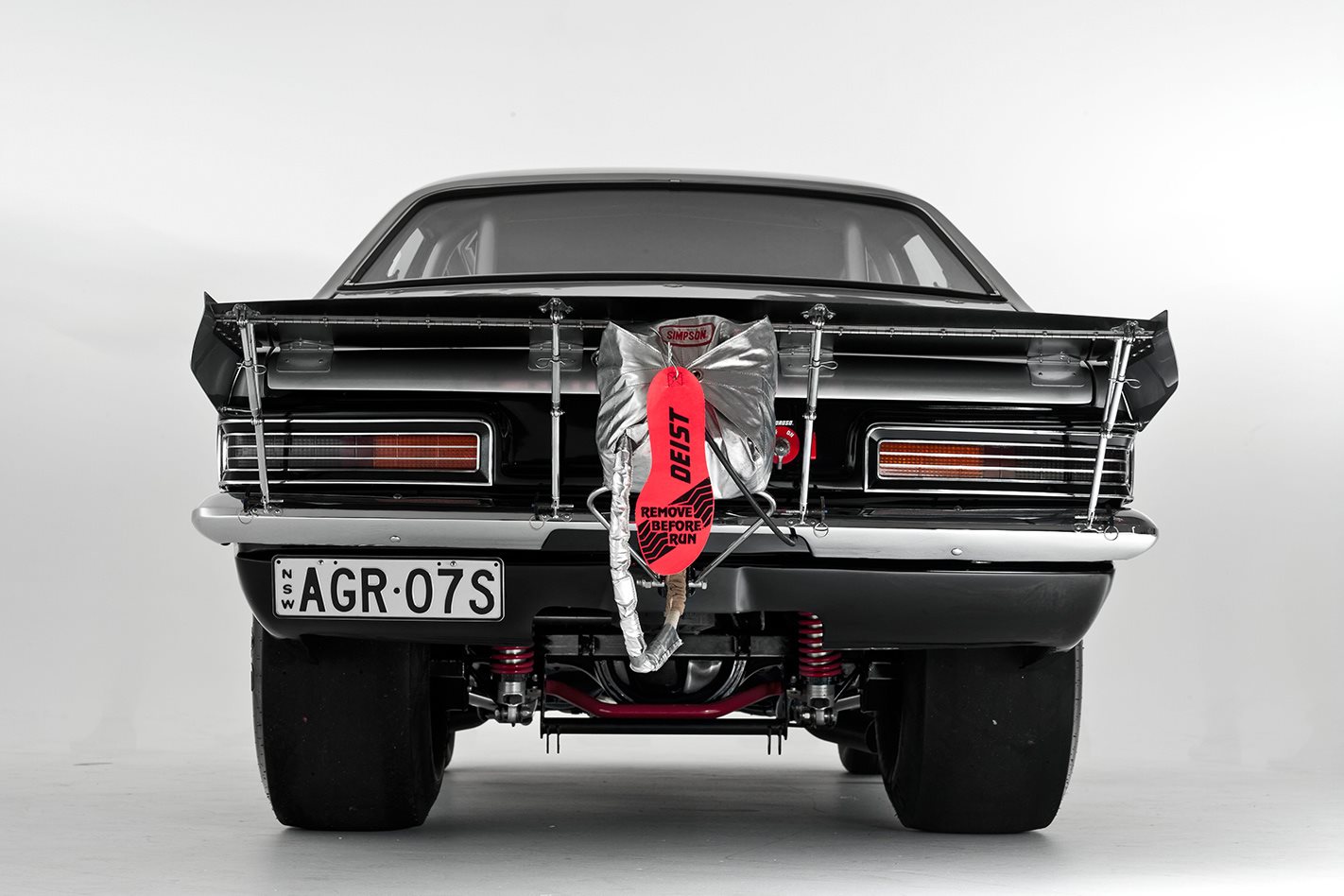 “All I had left was the shell and diff housing,” Steve says. “That’s all we could reuse; the gearbox, axles and converter weren’t good enough. It was the same throughout the car.”
That’s because what’s fine for a 9sec car isn’t even close when you’re aiming for sevens. 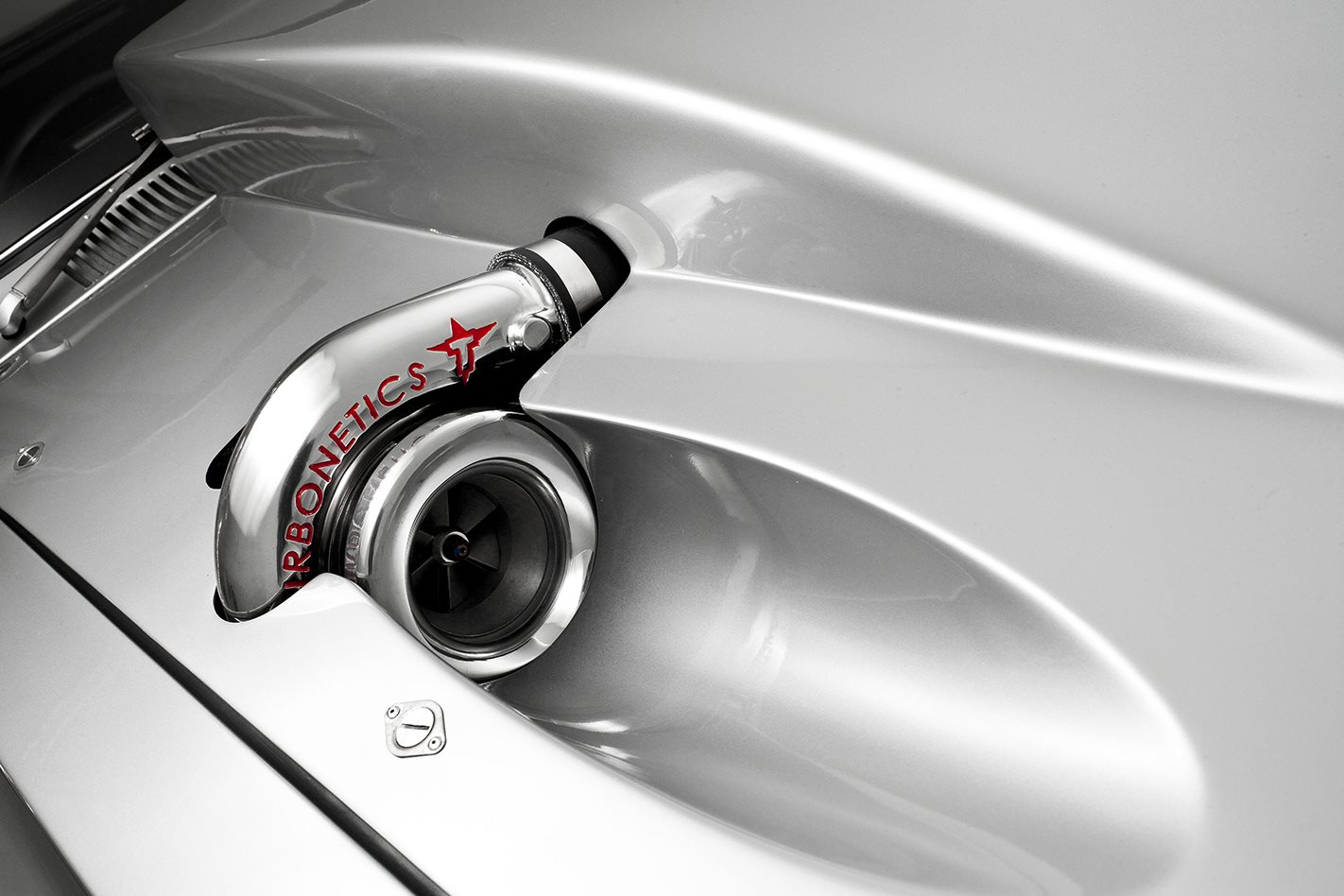 Ducts have been carved into the ’glass bonnet for a straight shot into the twin snails. There’s also a 41/2in cowl scoop for engine clearance and heat dissipation

When it turned out the old 370 wasn’t going to hack it either, Steve stuck it under the bench and Bill started with a brand new Dart block, a Callies Magnum crank, Oliver rods and Diamond pistons. Brodix heads, a Super Victor intake and 90mm throttlebody complete the intake path but the real power comes from those two 72mm Turbonetics snails peeking through the bonnet. 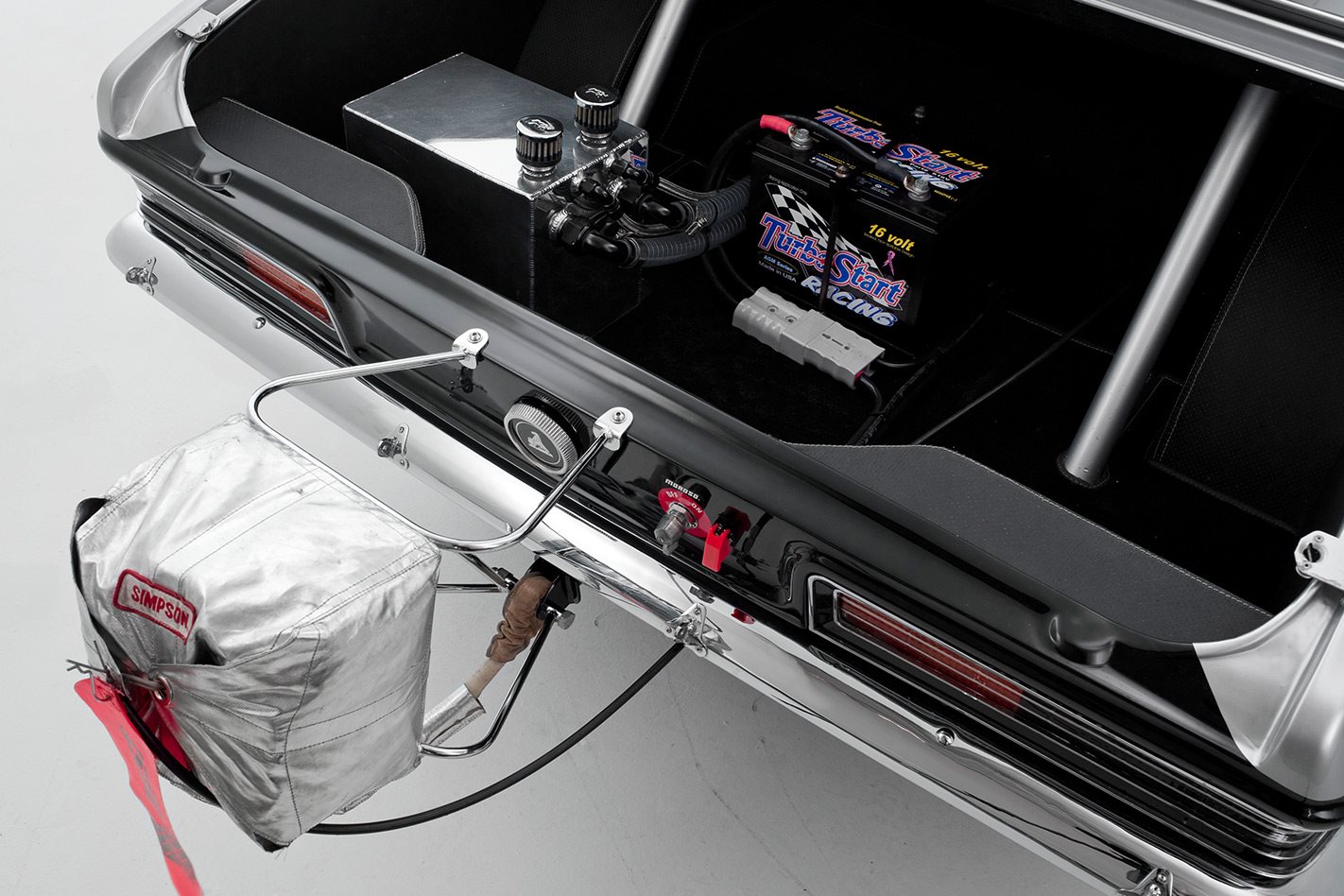 There’s no intercooler because this 422ci beast guzzles methanol through 16 Precision 225lb injectors. A Big Stuff 3 ECU — tuned by Bill — calls the shots and Steve estimates 1400hp based on a best of 7.84@181mph.

But it’s not all about the engine; there’s a bit of the show pony in this quarter horse. 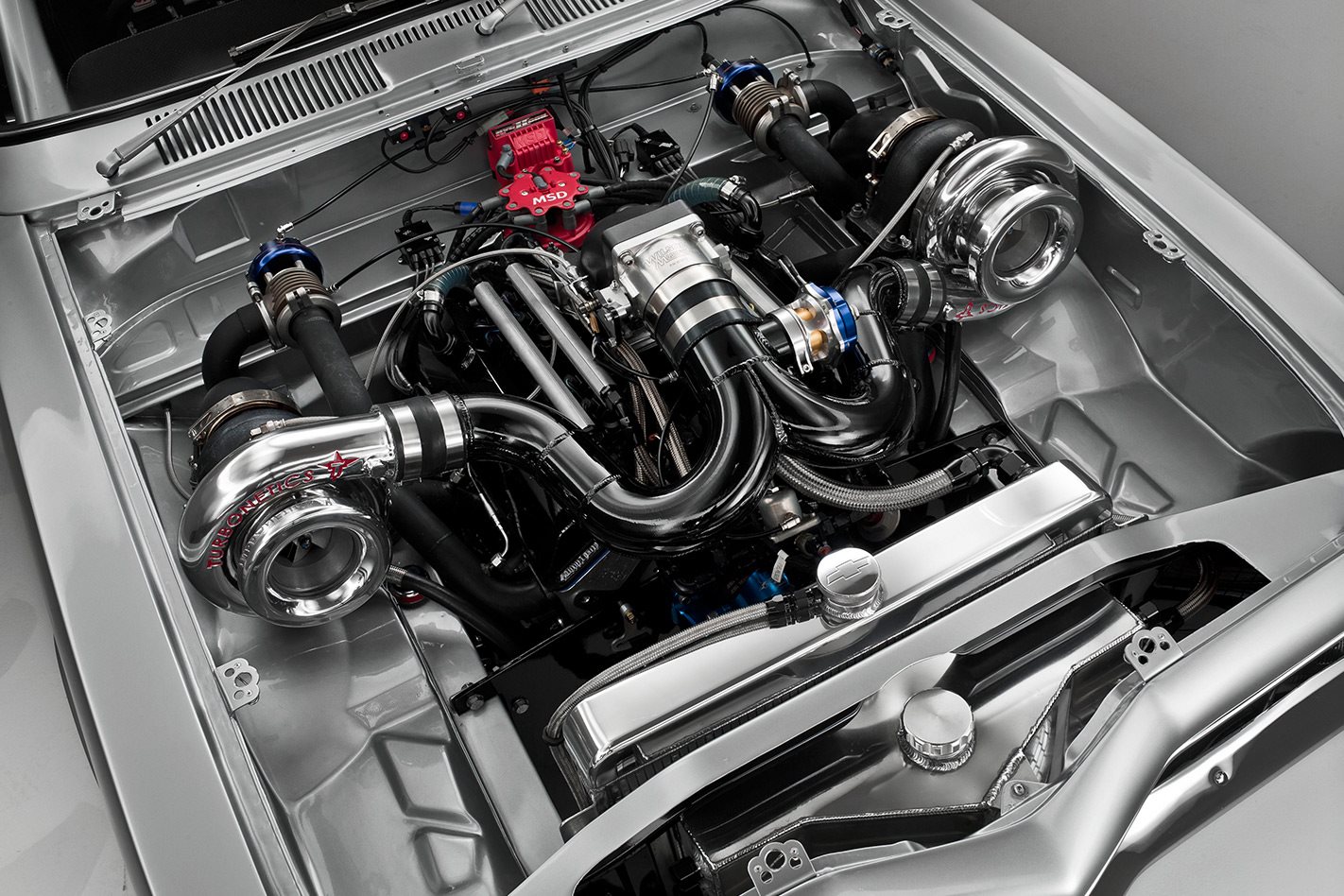 “I could have just saved my money,” he says, “but I didn’t. You’ve got to do it properly. I wanted an all-rounder, not just a race car. I can take it to shows and win trophies, run seven-second quarters and then take it Powercruise and other events and just drive it.” 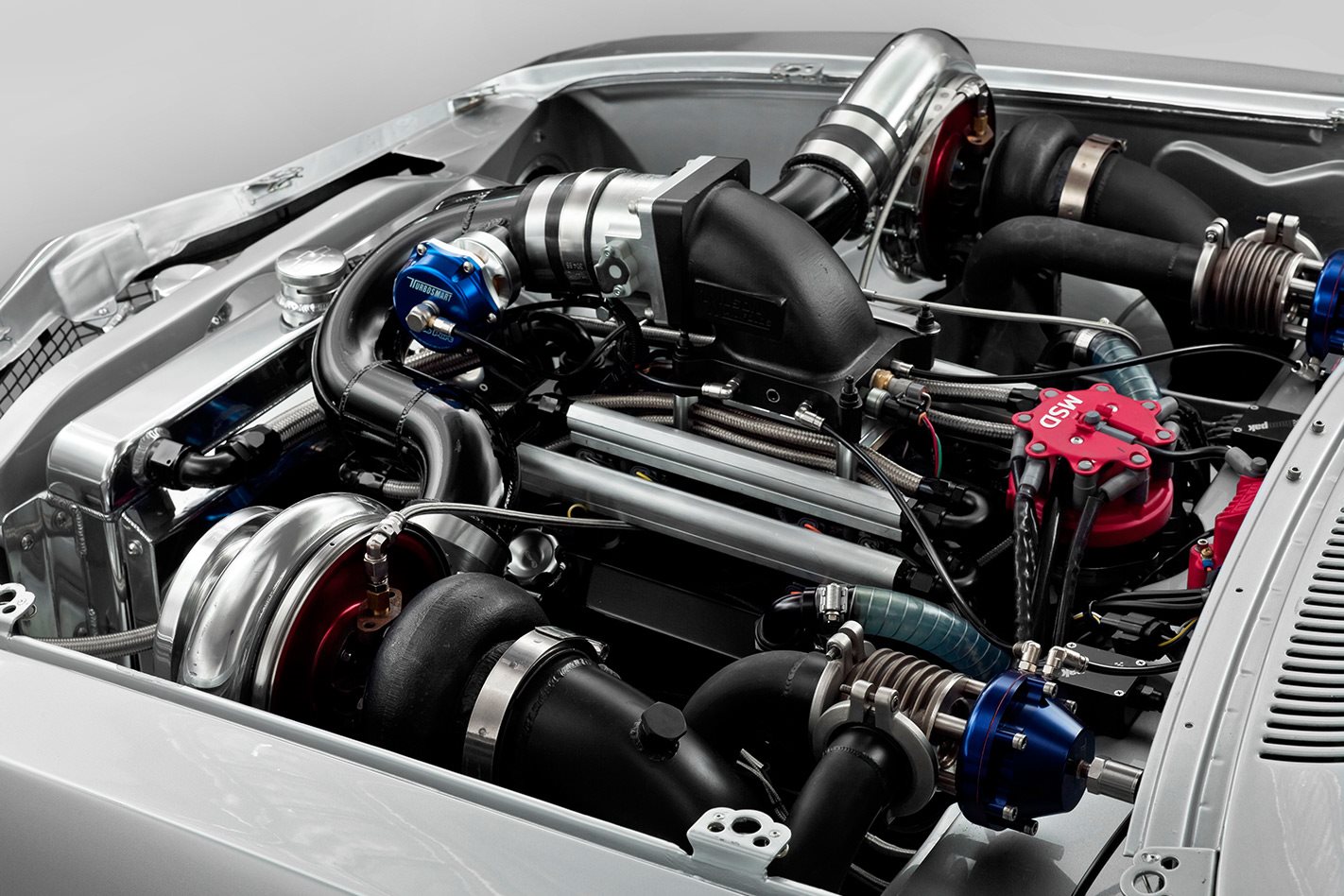 To do that, you need good help. “You get what you pay for,” Steve says. “You’ve got to go to the best people if you want the best results.”

So the shell went to Craig Burns at SCF Race Cars. The original plan was to run the car in Modified Street Blown, so it was set up with mini-tubs, chrome-moly suspension arms (with adjustable top arms), custom anti-sway bars and a track locator. 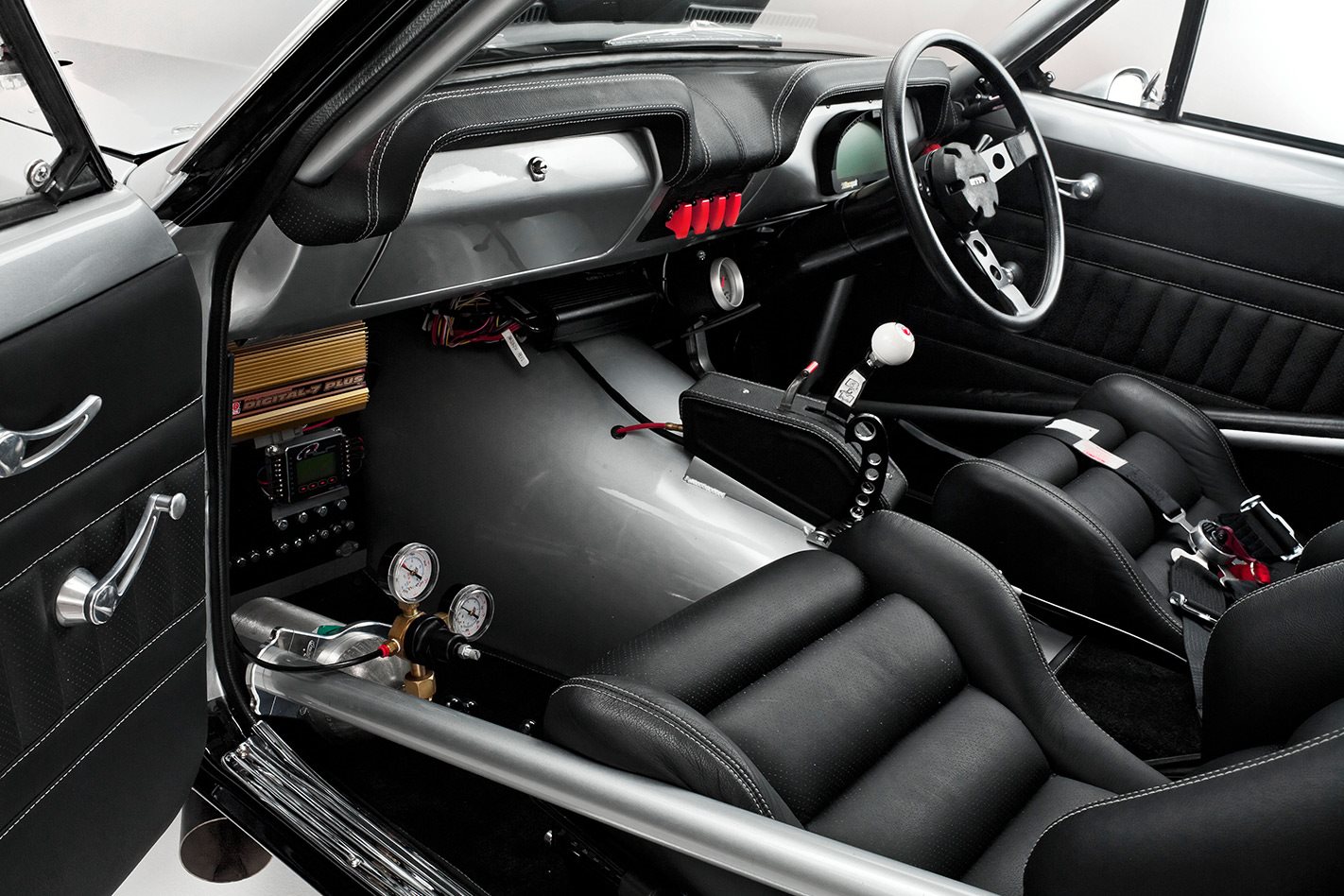 Under the rear, the diff is military-spec — bulletproof. Gun-drilled 40-spline Mark Williams axles work with a MW alloy centre and 3.45 Pro Gears to pass the power down the line from the Al’s Raceglides-built transmission. 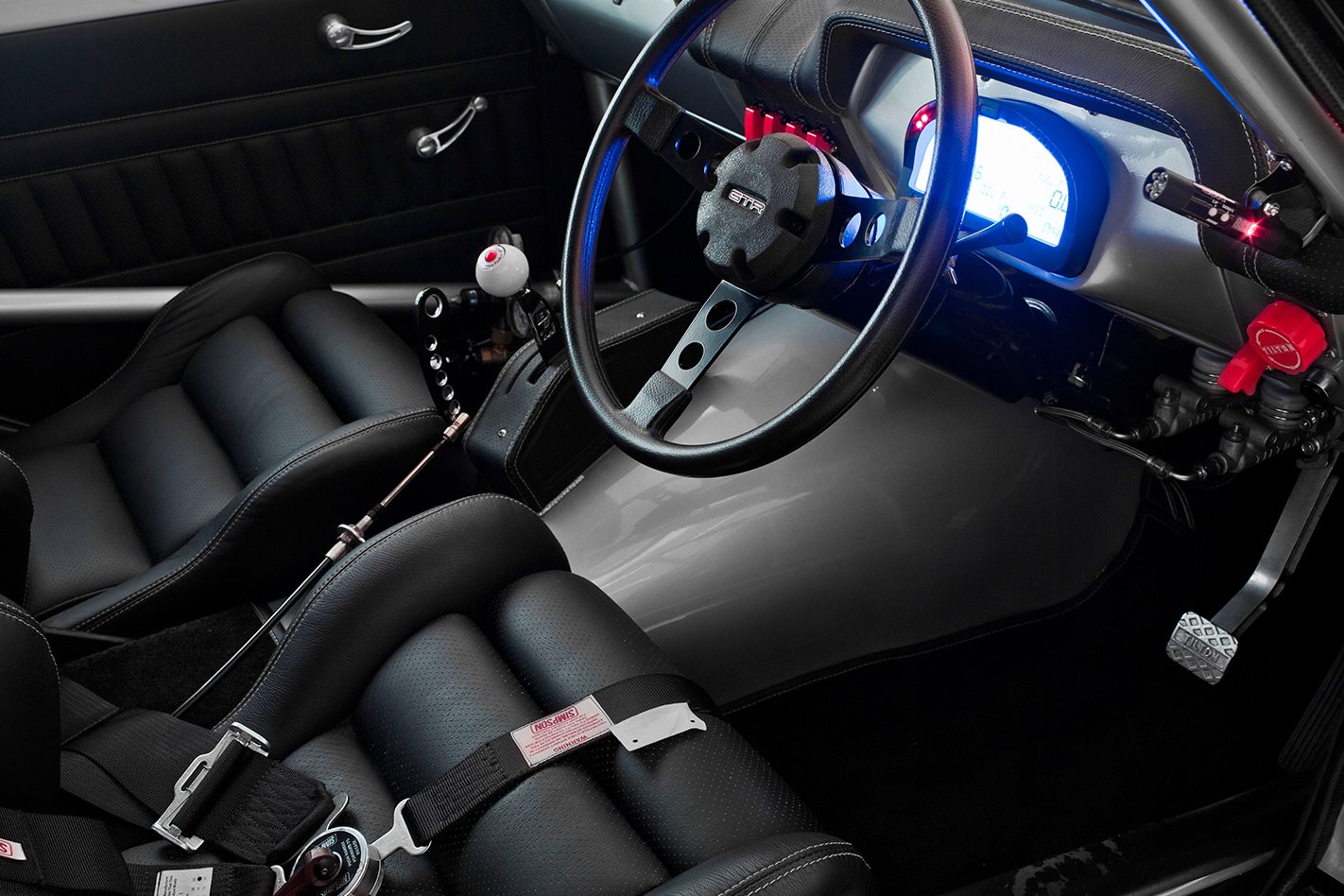 It’s a digital age. Without cool electronics like the MSD Digital 7, AMS1000 boost controller, Racepak dash and Big Stuff 3 it would be near impossible to get a car down the track in seven seconds on 101/2in tyres

Wilwood brakes adorn each corner to pull it up from 290km/h. Plus a little help from a single ’chute — any faster and it’ll need a second one.

The final bodywork was left to Danny at Custom Bodyworks. Steve admits that at first he just wanted the rear wheel arches stretched, but Danny convinced him otherwise. 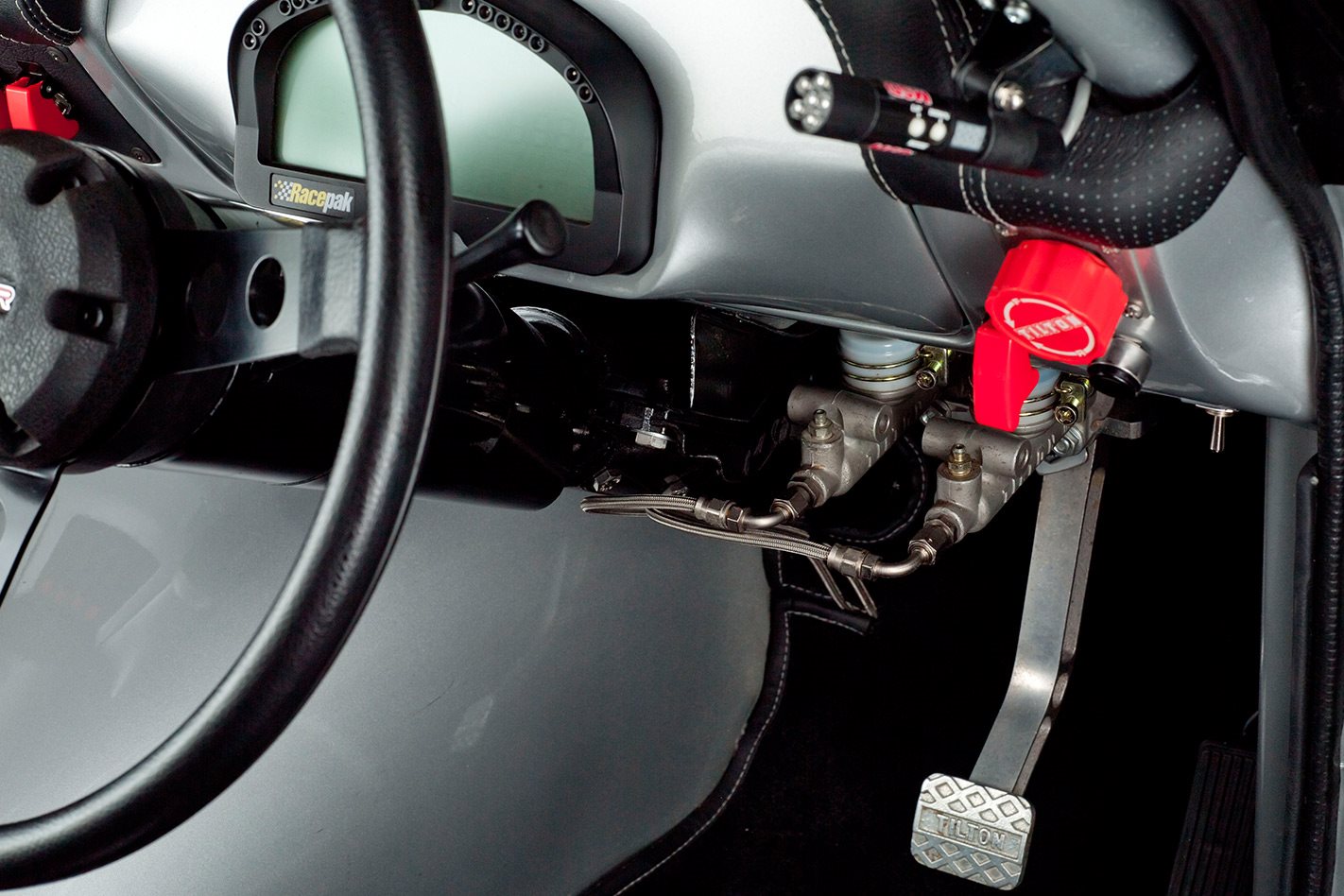 “He said: ‘If you want to keep it, you’re better off doing it all again.’”

The House Of Kolor Silver is a touch darker than the car was beforehand but the combination of classic silver colouring and GTR blackouts make for a striking package. It certainly impressed the judges at MotorEx 2011, where it won Best Competition amongst a very tough pack. 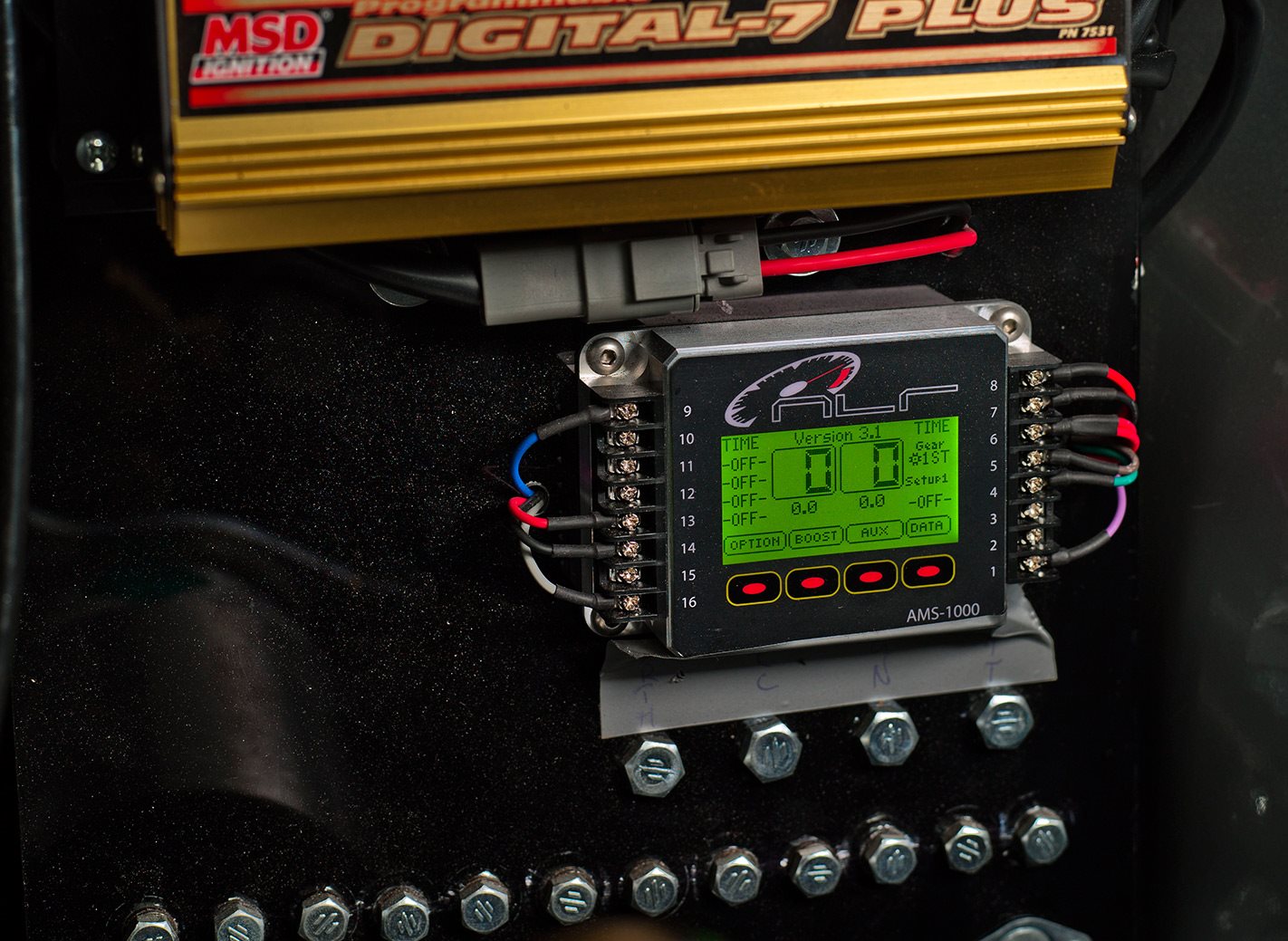 Inside, it’s a mix of black leather and Mercedes carpet, with some painted metal to break it up. Recaro seats are unusual against the usual drag-style Kirkey or RCI buckets, but the rest is pure race. A Racepak dash and datalogger keep an eye on everything that needs watching and there’s more electronics than the space shuttle.

With 19 seven-second passes under his belt, you’d think Steve would be happy — he’s got his dream car and it accelerates like a missile. But of course he’s talking about going faster. 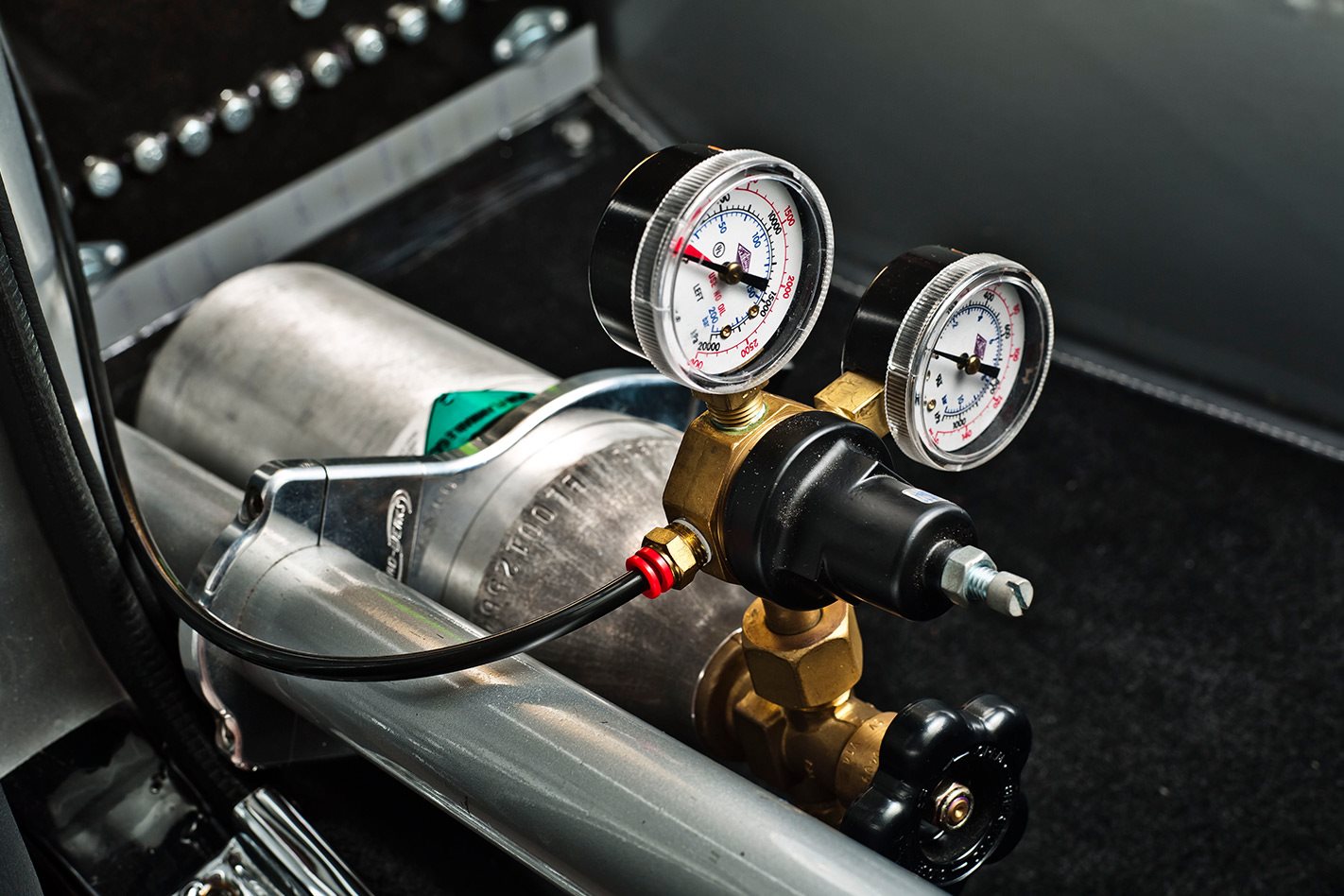 The AMS1000 boost controller uses CO2 to control boost by applying pressure against the wastegates. It holds the ’gates shut on the line for quicker boost response, then precisely controls pressure down the track

“When we built it, I got everything made to suit 2000hp — gearbox, engine, diff, converter, everything. I knew I had to set it up for 2000hp just in case I needed more. It’s fast but I don’t know — I’m already getting used to it. It’s just the turbos that are holding it back.” 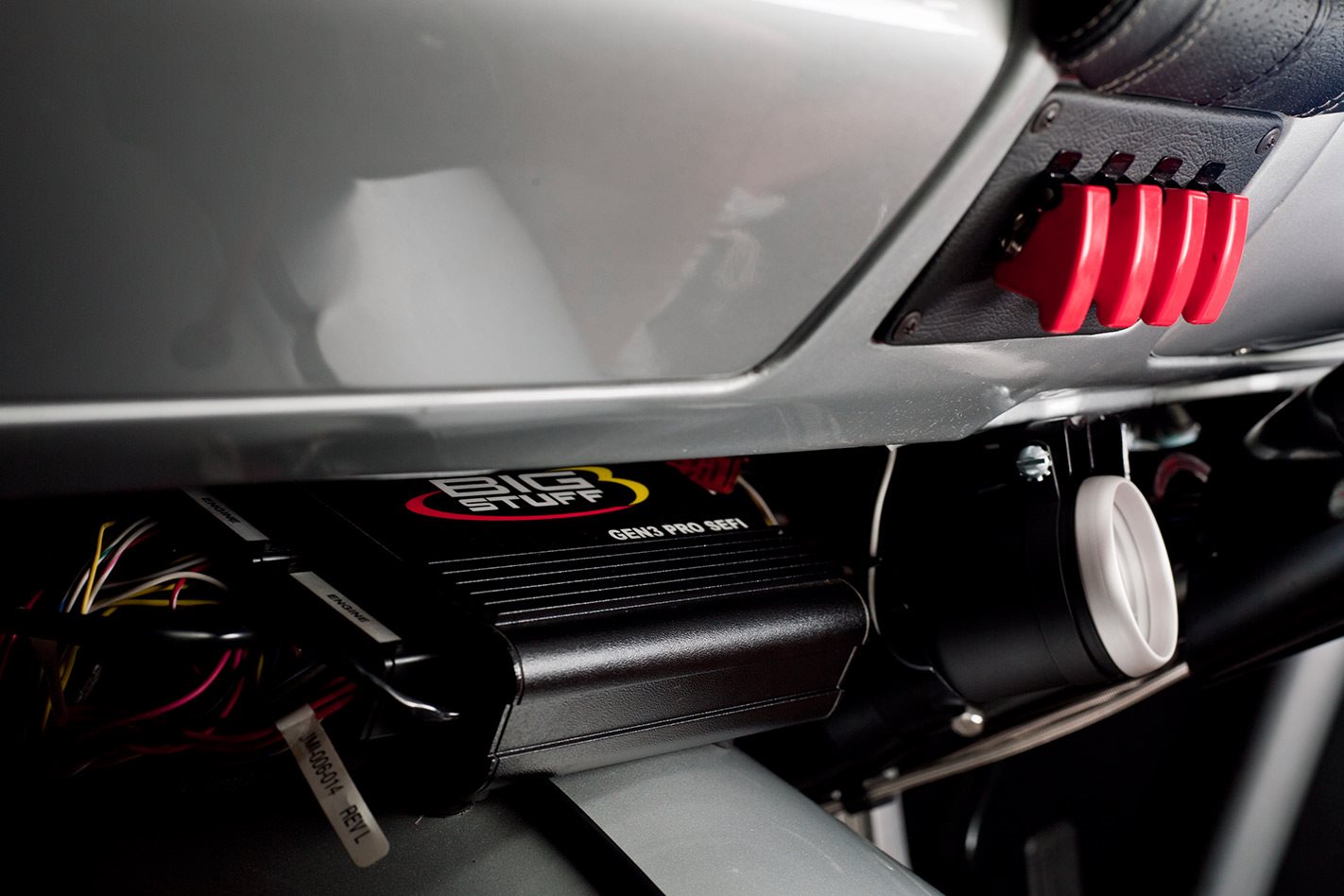 At 24psi they’re about at the limit. They tried more boost but the car started going backwards, with the exhaust back-pressure skyrocketing. Instead, they’ve prepped a pair of Precision 88mm turbos, with a pair of 60mm wastegates to suit. They’ll bump the car into Pro Street Blown but provide more boost, more power and hopefully some low seven-second timecards.

“I could put that engine into a chassis car tomorrow and run sixes but I probably wouldn’t be into it,” Steve says. “You want something in the garage that you’re into.” 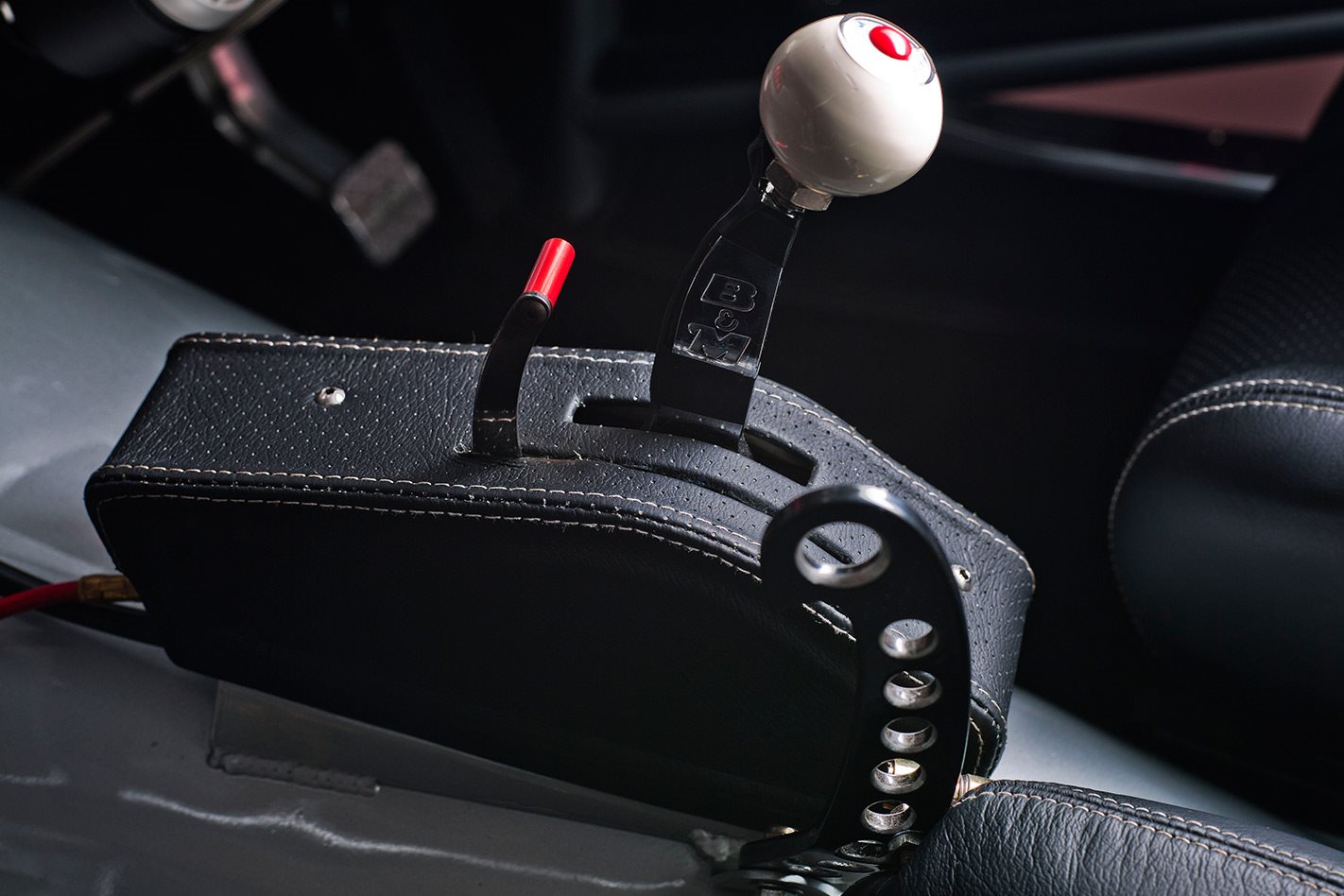