The Yanks are famous for their love of litigation yet George Bastiras's 1963 Ford Futura coupe is street legal. Maybe it still is the Land Of The Free after all

The Yanks are famous for their love of litigation yet George Bastiras's 1963 Ford Futura coupe is street legal. Maybe it still is the Land Of The Free after all

MY KIDS love it. Julia always asks what she can do to help, Alec wants to race it on his push bike and Jim can’t stop grinning when the engine’s running.” George then explains his three revhead offspring are just seven, five and 18 months old. 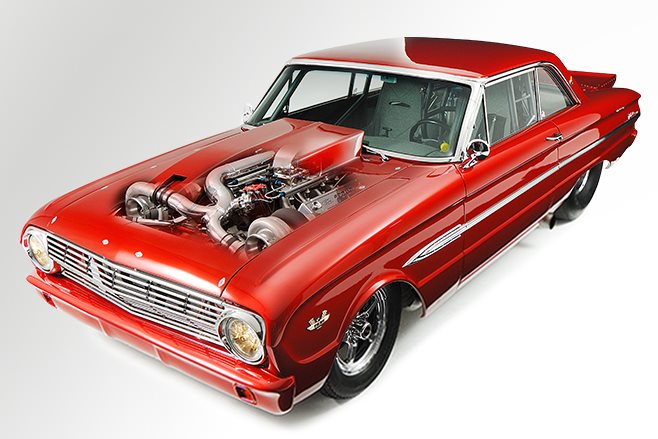 George Bastiras’s 1963 Ford Futura coupe is a big-block beast with twin turbos, massive rear rubber and perfect chrome, stainless, panels and paint. Yet, as the parachute suggests, it can’t be legally driven on the street. To some, such as George and his kids, it’s the closest thing to heaven on Earth, while to certain others it seems, well, impractical at best.

George is a car enthusiast who started drag racing at Adelaide International Raceway in the mid-80s, when he was 16 and the ink was still wet on his licence.

However, with his feet to the fire George revealed that his brother’s Mouse soon made its way into his own HQ and while still in his teens he was pulling low 12s. Racing remained his hobby until that sad day in 2005 when the drags died in suburban SA. 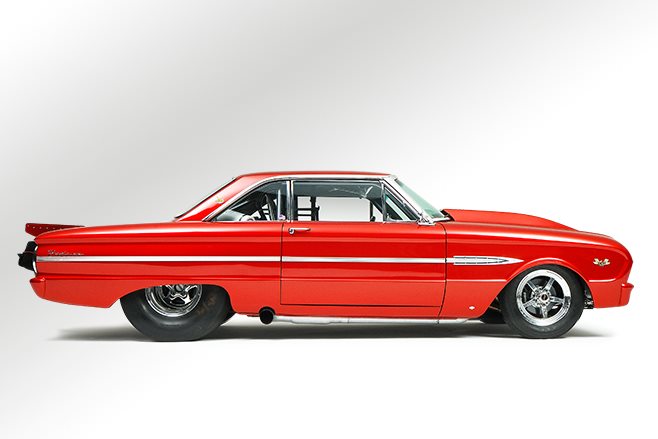 “Once I couldn’t race, I decided to build the ultimate blown and injected big-block hot rod, have it properly engineered and get it registered. It’s underway now — a five-window steel body Model A running a 598.”

All was progressing smoothly on the Model A until George heard about Drag Week. This US event (Urban Warfare, SM Nov ’10), revolves around driving your killer ride to five drag strips in the same number of days on a 2000km route; trailer queens need not apply.

It sounded like a real man’s sport and he wiled away many pleasurable hours studying the event on YouTube. A seed had been planted and perhaps it was no accident that he soon stumbled upon a purpose-built Drag Week car that was up for sale in New York. Whether it was love at first sight George isn’t saying, so let’s get straight to the tough Falcon itself.

In 1963, the up-market Futura was a special car. Limited production, factory 260 V8 and four-speed, bucket seats, deluxe leather trim, centre console and tacho. It was Bullitt’s Mustang even before ‘Lee’ Iacocca came up with that earth-shattering concept. 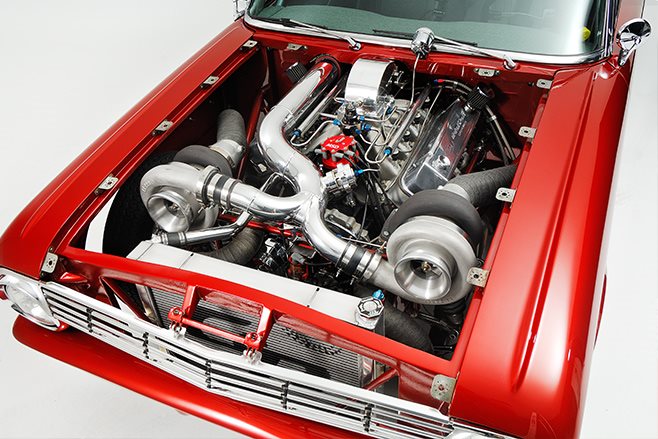 Under the boonet is an Eliminator 460 block taken out to 604ci, Ford Motorsport C460 heads and all of the best internals. Producing the boost is a pair of Precision GT54/88 turbos on custom headers, cooled by a New Generation liquid/air intercooler and force-feeding the engine via a 90mm Accufab throttlebody

George’s Autumn Orange Futura takes those factory goodies up a notch, although it’s still equipped with real glass all ’round, wind-up windows, carpets, wipers, high-beam dipper, original door handles and mirrors, all its steel panels, plus every original piece of stainless trim and badge. The only concession to reduced weight is fibreglass for the bonnet, boot lid and bumpers.

It’s under that bonnet, however, that things go mental. In the form of a 604ci big-block fitted with two 54/88 Precision Turbo snails.

“The car competed in the DynoMax challenge before it left the States and recorded 1778rwhp,” George says. This GP of horsepower shootouts holds its finals at SEMA in Vegas and carries a purse of US$40,000. 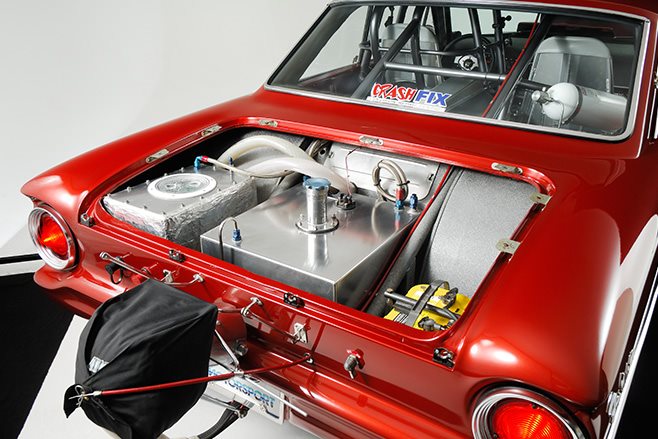 The rest of the US street-legal Futura is as high tech as the engine is heavy hitting, from the Rossler TH210 trans that comes with an unlimited horsepower rating, to the Strange nine-inch, the funny car-certified ’cage, Flaming River front end with rack and pinion steering and tubular A-arm suspension, and the biggest liquid-to-air intercooler that New Generation produces. That’s so big it’s set inside the cabin, behind the Kirkey Pro-Street front seats, and it’s backed up by a 7.5-gallon icebox in the boot.

Wilwood discs with billet four-piston calipers take some of the strain off the Stroud ’chute, while the 33x18.5 Mickey Thompsons are screwed to the rear 15x14 Pro Stars so they don’t tear off the rims; Aluma Star fronts are 15x3.5. 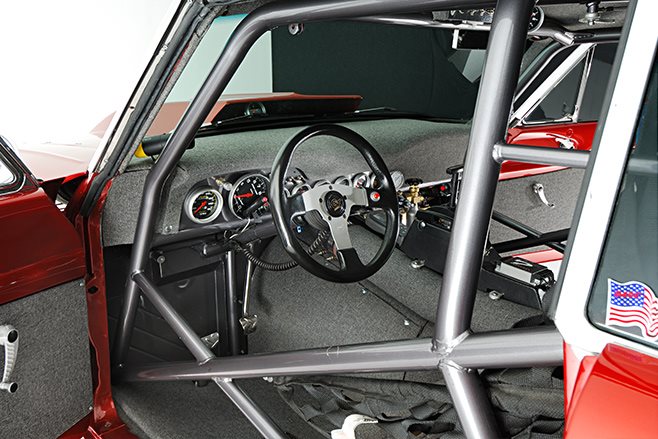 All this good gear is bolted, screwed and welded into an NHRA-certified chassis designed to ensure the road racer could take everything Hot Rod magazine and Drag Week could throw at it.

“I’m desperate to run the thing down the strip!” George squirms in the seat as he says this. “At the moment it qualifies for Super Sedan and once I address a couple of ANDRA safety issues that don’t apply in the US I’ll get it up to the Whyalla eighth-mile. I did take it to Gazzanats at AIR and it was wild being able to drive it. Best part was how docile she was — I was in one line for 20 minutes and everyone else was pushing their car a few metres, waiting, pushing, but the Ford just sat there and idled. None of the dials moved out of normal and all day I could stop and start without a drama. All on pump fuel too. What a buzz!” 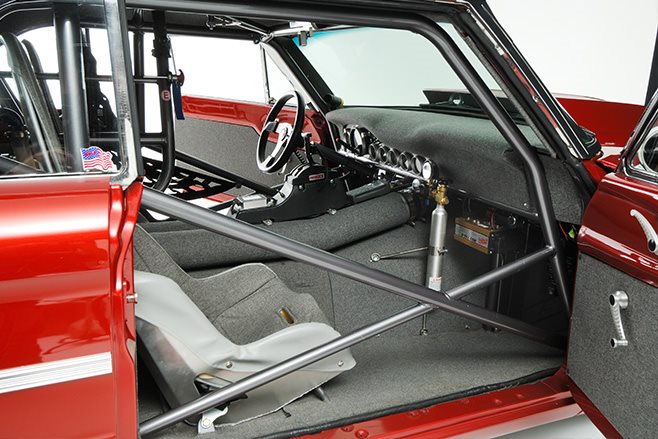 George is a modest bloke so it took some prying to find out how the Futura had fared at its only two show outings to date.

“It won Toughest Ride at Gazzanats and I was stoked with that because I only entered so I could have a bit of a play behind the wheel. It was there I got talked into doing Extreme Horsepower and against some serious interstate competition it won Top Engineered, Best Race Car and a spot in the Top 20 — that was so unexpected and blew me away!”

George leans back in his seat and laughs: “I might become a show junkie — as long as I can race it hard too.” 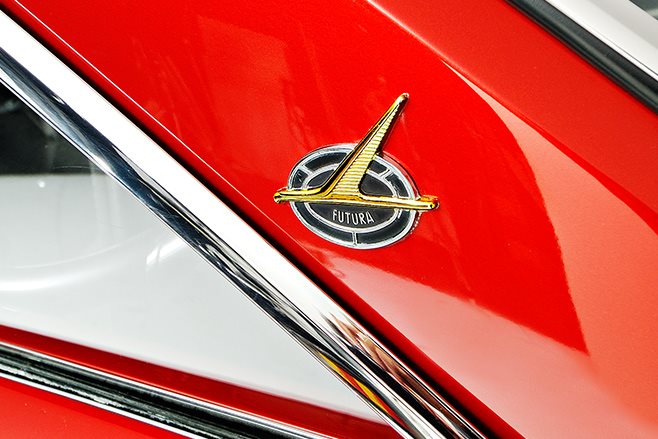 So what’s ahead for this 47-year-old immigrant from Detroit? “My plan is to get into the 10.5 Outlaw deal. There are too many cars competing in Super Sedan and many of them are the more modern styles. It’ll be a real challenge dropping from 18.5-inch tyres back to 10.5 with all that power but it’ll be a blast competing against nostalgic cars from the 60s and 70s, like Toranas. Once I get the car sorted, it’s off to the eastern states to take it to the big boys — that’ll be fun.”

Despite his excitement, it was journalistic dentistry getting George to predict some quarter-mile times.

“The car needs some sorting, I have to learn how to drive it, get the best out of it, but I’d like to think sevens were on the cards.”

All that cool reserve evaporated when it came to thanking people, however. 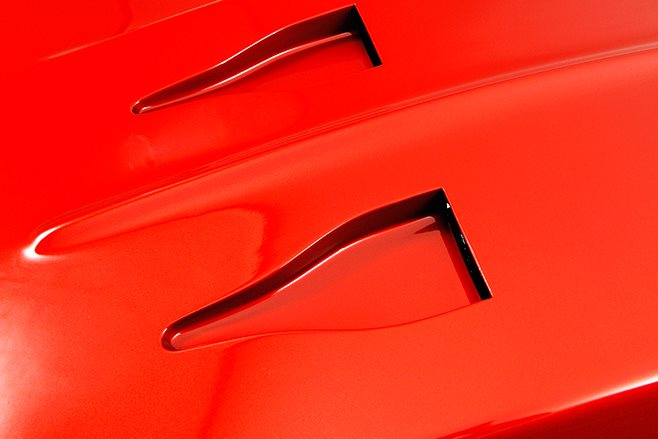 “I owe a few people big time — Joe and Peter from Joe’s Golden Gasoline for getting the car over here, my nephew Jeremy and my brothers-in-law Nick and Danny for everything — cleaning, always being there — plus my employee and friend Little George, who puts in huge unpaid hours of help. Those last four guys spent 12 solid hours getting the car cleaned and prepped just for this photoshoot.

“The biggest thanks of course have to go to Sofia, for running the household and looking after our three kids while I go off to car shows all weekend.”