Built for regular street use, this twin-turbo LS-powered '56 is now gobbling up trophies

This twin-turbo tri-five Chevy was initially going to be built to tackle Hot Rod Drag Week, but it ended up a fearsome cruiser instead

A TUBBED tri-five Chevy is just about as iconic an image in street machining as you can find, and this ’56 sedan encapsulates everything awesome about tough street cars. Sydney’s Anthony Penna spent over six years building this twin-turbocharged, trophy-taking monster, although it all started by accident. 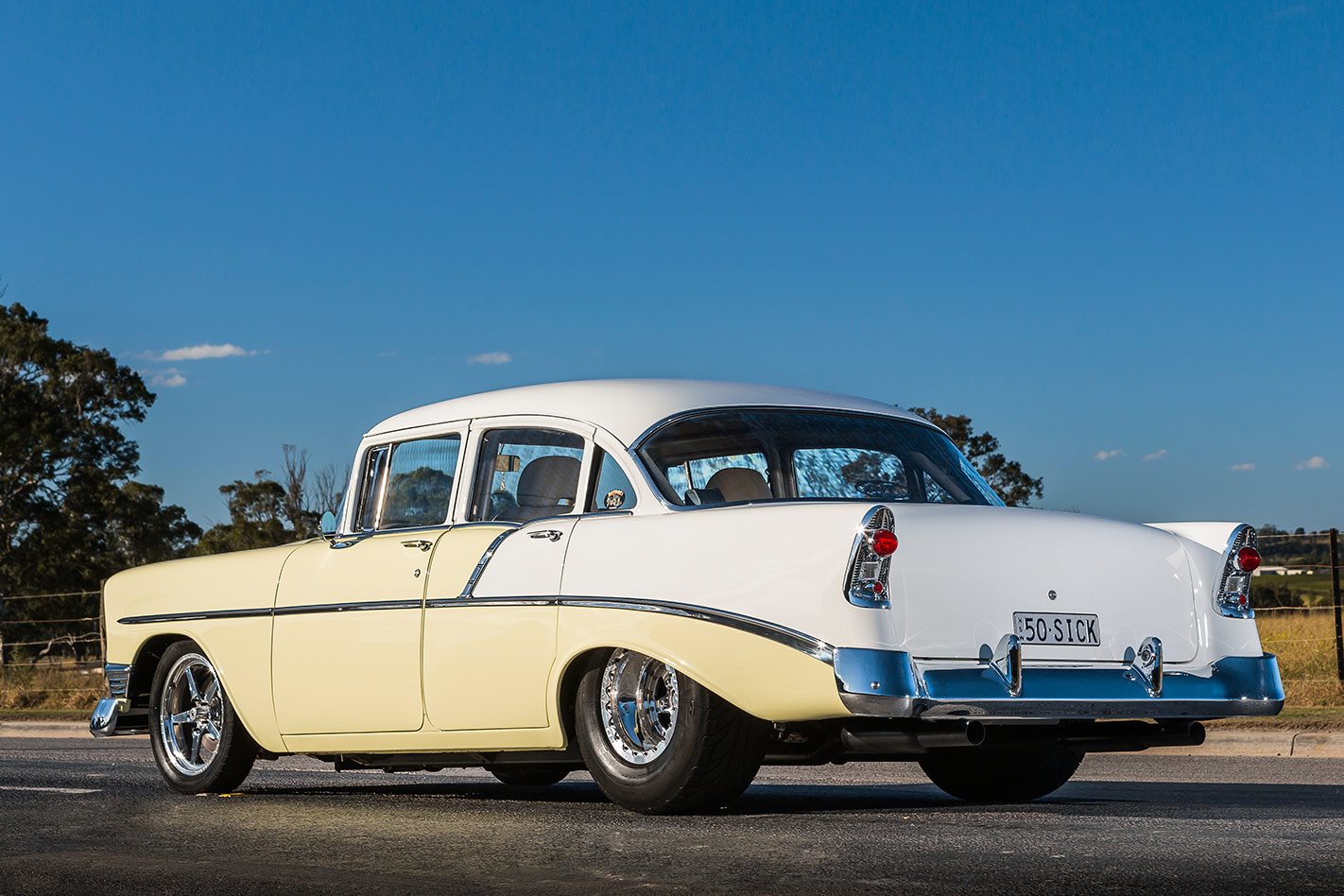 The original plans for 50SICK never included respraying it, such was the solid rust-free condition of the four-door shell. However, thanks to the undercarriage and chassis coming up so well in the black powdercoat, Anthony had the stock beige/brown two-tone body straightened and shot in PPG Toyota White over Amarillo Yo-Yo yellow

“I had just sold my drag car and my ’bagged LS1 ’61 Cadillac and I was looking for a new project so I could have the best of both worlds in one,” Anthony says. “I was on the way to have lunch with my wife when I noticed the Chev parked on a footpath, so I turned around, did the deal and bought it. It was a very expensive lunch, which I am still paying for! 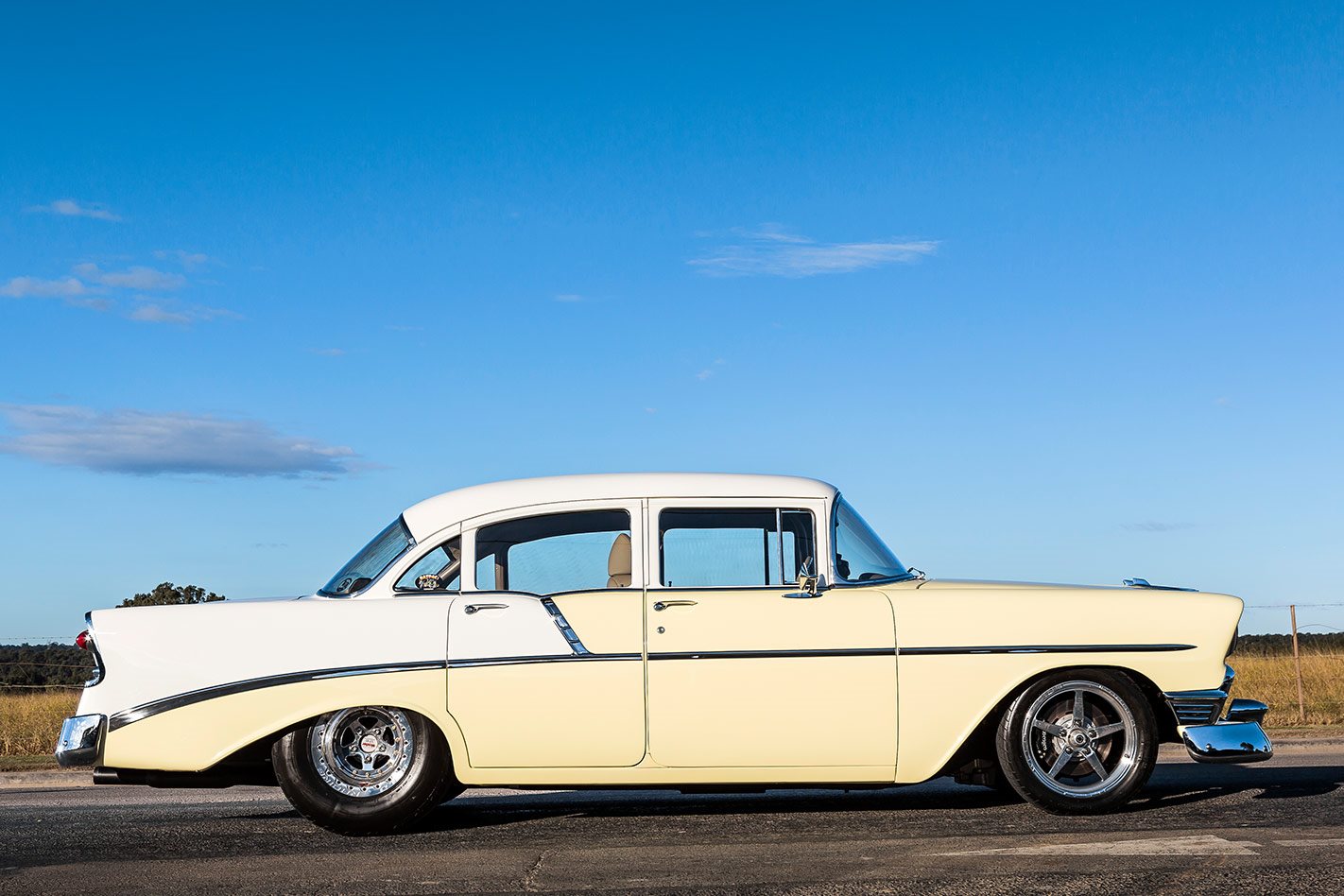 While it wasn’t built to hunt trophies, the judges love 50SICK. It recently picked up the Bronze Excellence In Engineering award at MotorEx 2017, which Anthony says is a huge deal to him. “I think that award is really important. I built it to drive, and drive it is what we do”

“This car was never supposed to be this good,” he continues. “Six years ago, before Street Machine Drag Challenge was around, it was meant to be built like a Hot Rod Drag Week car: plain black interior, aluminium door trims and unpainted. I wanted it to look like a cool old-school Pro Street car, but I got the chassis powdercoated by Peter Snell and thought it looked awesome, and then I got tube control arms, and all of a sudden I’m winning trophies.” 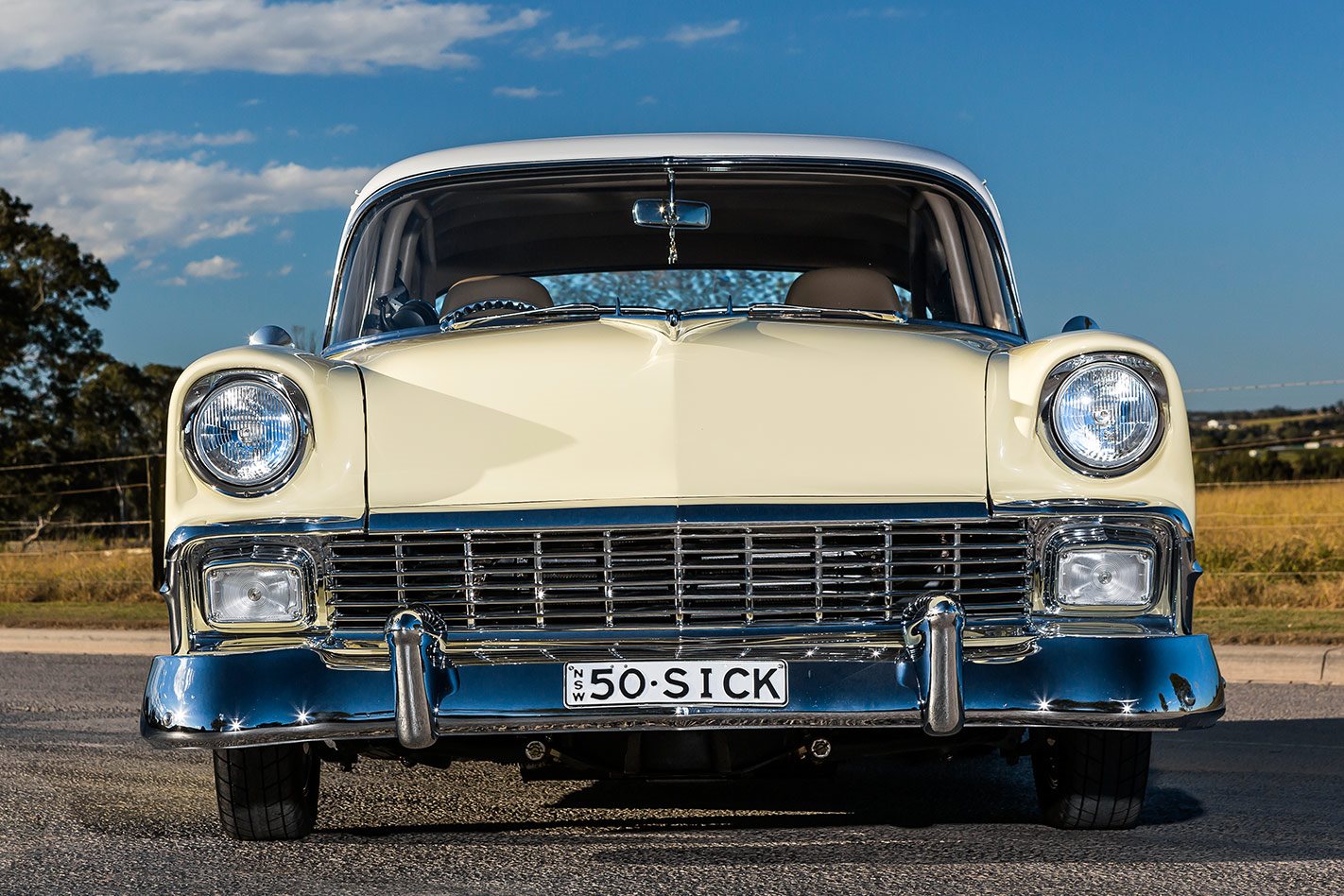 Sitting as a freshly imported left-hook, brown two-tone survivor, the tri-five was a heck of a long way from the tubbed glamour it is today. And these days the more-door has no problems with its power-to-weight ratio thanks to a 725rwhp 408ci LS up front, built by Sydney horsepower kings ProFlo Performance.

When your former ride was a tube-frame HiLux that ran 8.2s, a stock 350hp LS3 isn’t going to cut the mustard, so Paul built up a ripper engine for Anthony’s 50SICK using an iron LQ9 6.0-litre block as its base, with JE pistons, Lunati rods, a Callies crank, and Comp Cams lifters and cam filling out the bottom end. 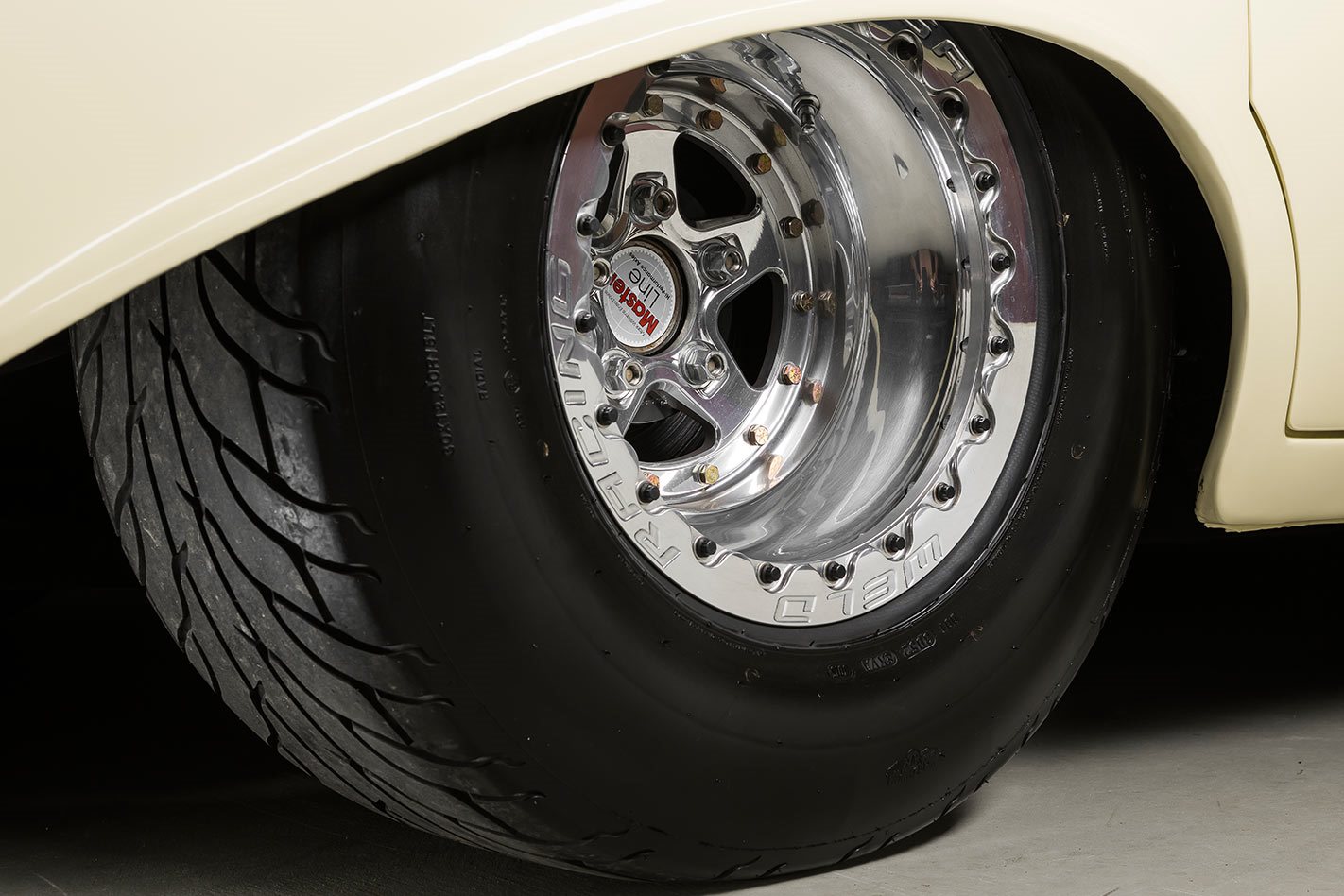 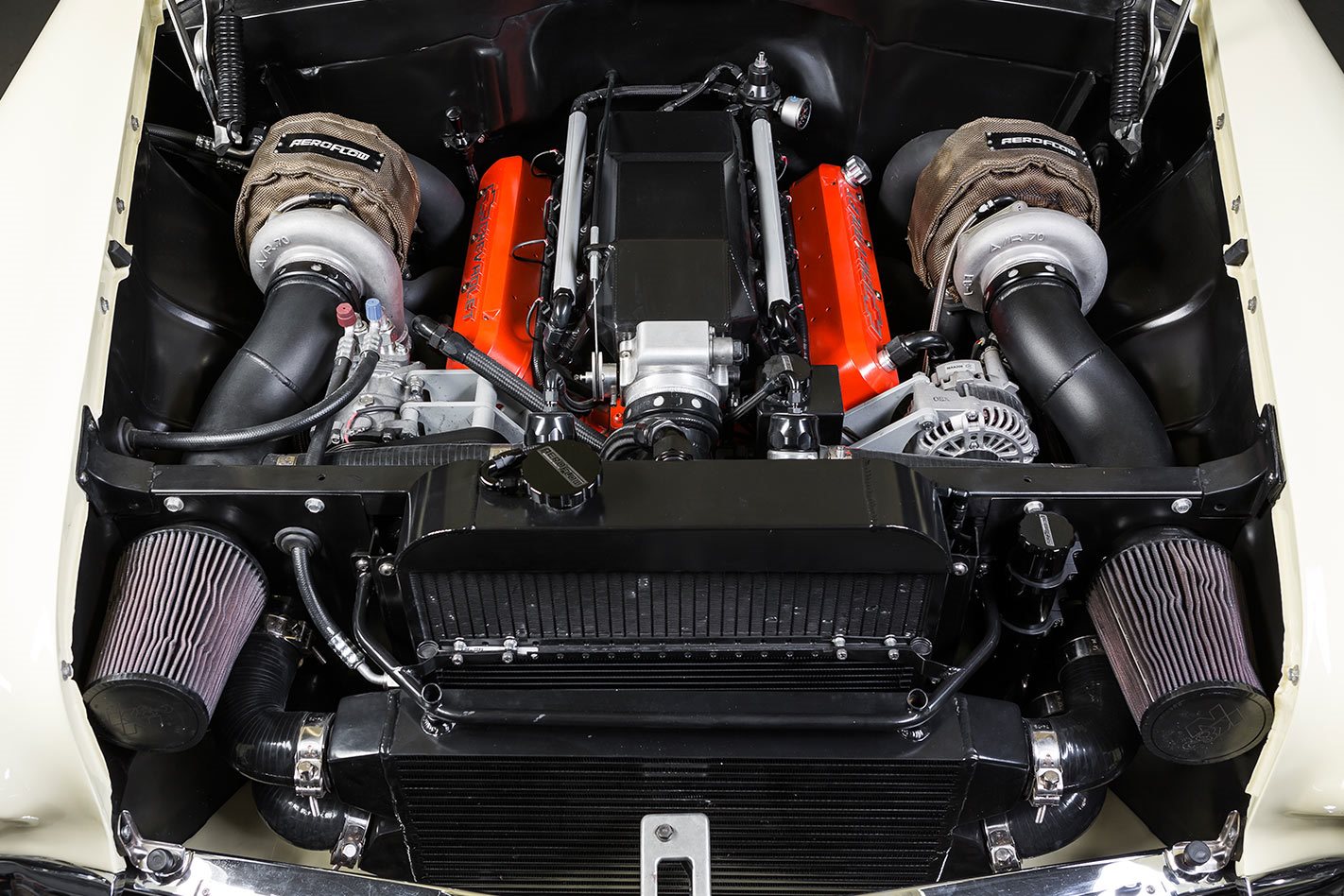 There’s a huge Be Cool alloy radiator and Davies Craig fan sitting up front, along with a high-volume oil pump, all doing a killer job of keeping the force-fed Chev from boiling. “It sat in half an hour’s traffic leaving MotorEx, but it didn’t play up,” Anthony reckons

It all turned to disaster on the first dyno run, though. 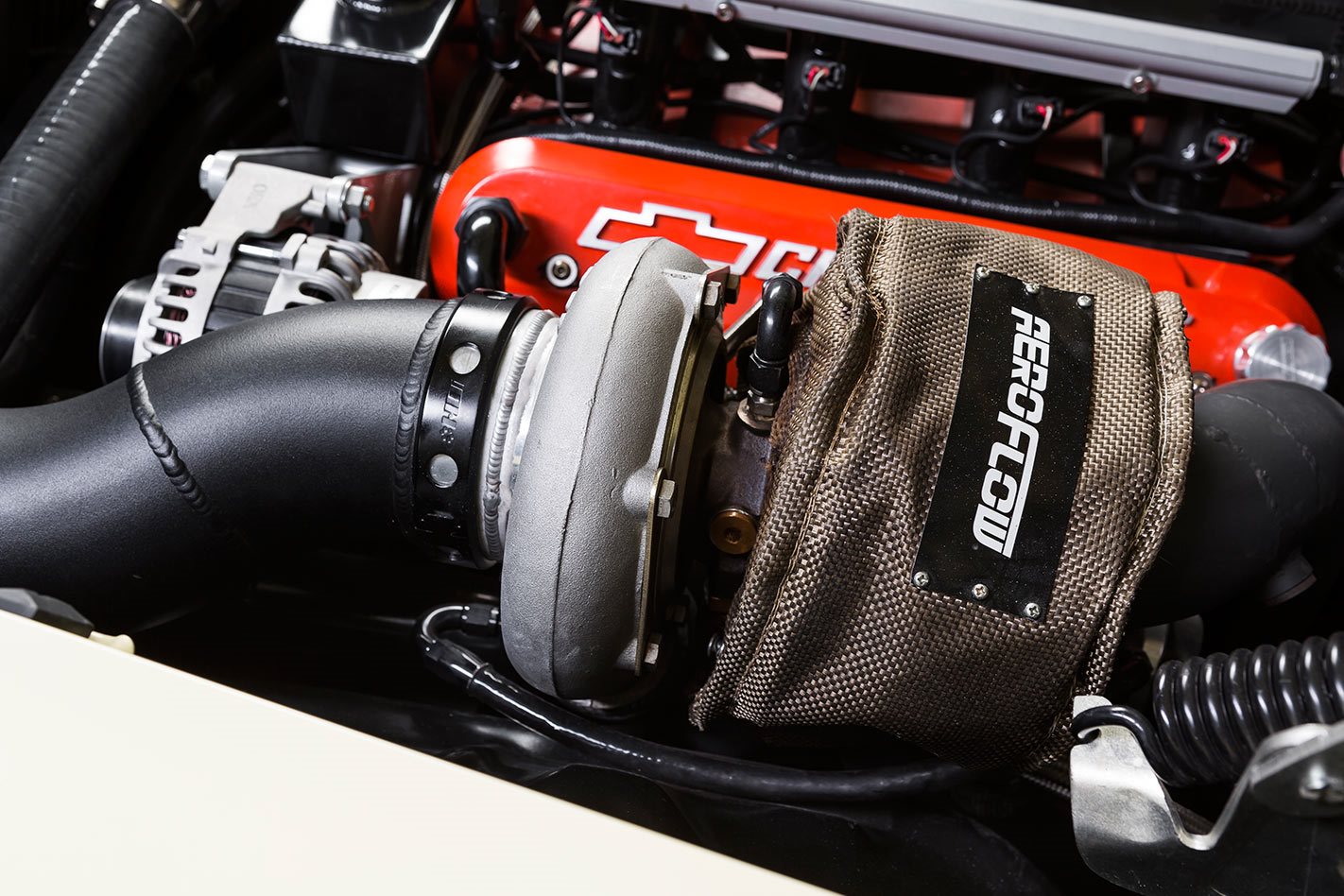 “We aren’t sure what happened, if there was slag in the intake pipe or a sparkplug broke, but something went through the engine and bent a valve, smashed a piston and destroyed two turbos!” Anthony recalls. “Paul and the ProFlo crew fixed it and got the engine back in the car. They got it to Karam Racing to get it tuned, all while I was in hospital. The first I knew about it was when I got a text message with a photo of the dyno screen! 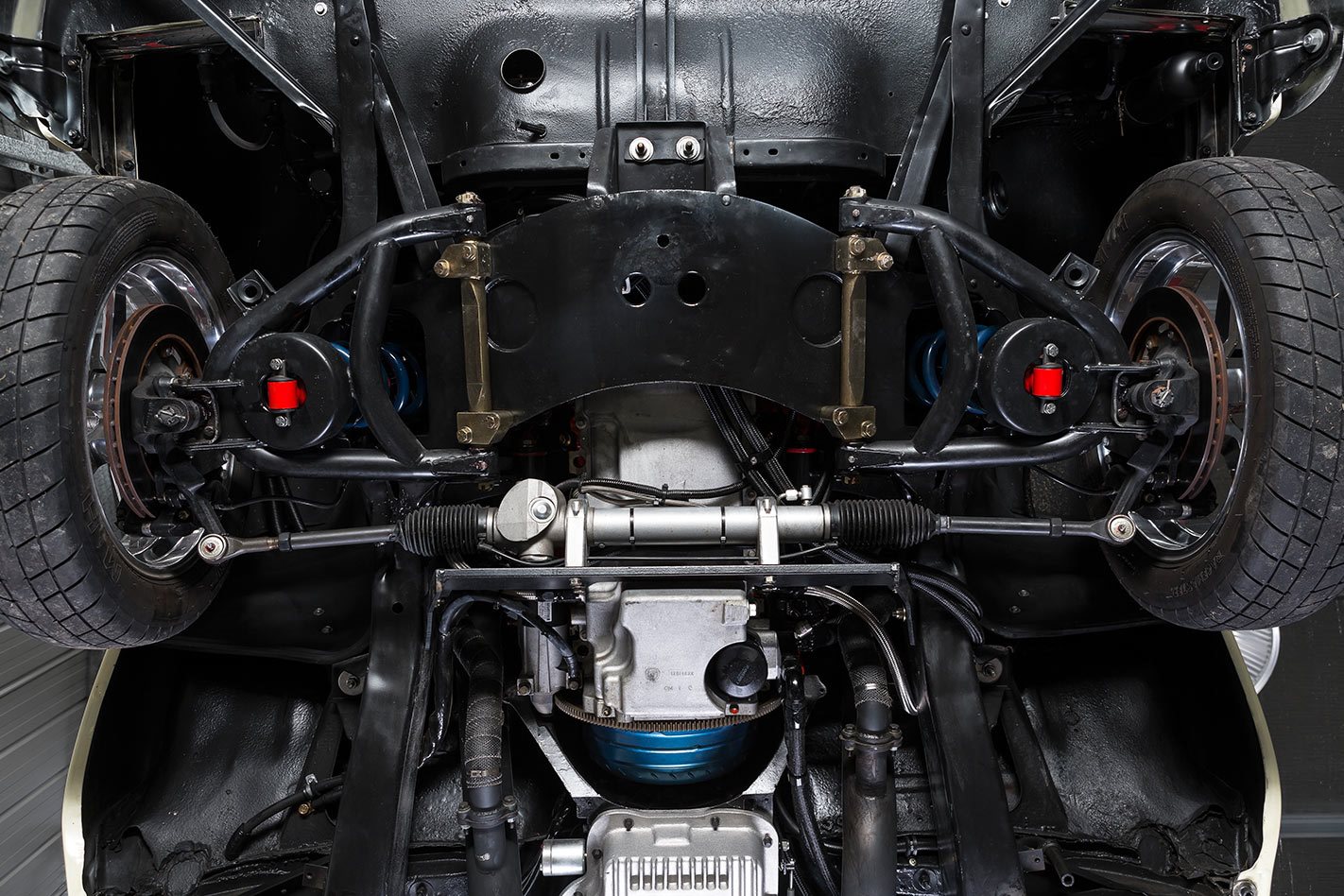 Anthony used powdercoating extensively through this build. “Durability and cosmetics were the reasons to go powdercoat,” he explains. “Peter Snell did my whole chassis and many of my engine bay parts in Oxytech powder”

All those horses push on a Protrans Turbo 400 auto that has both a transbrake and bump box, with a Spec Rite converter. ProFlo made a custom tailshaft to hook up to the Strange nine-inch, which has a Truetrac centre and 35-spline Mark Williams axles. 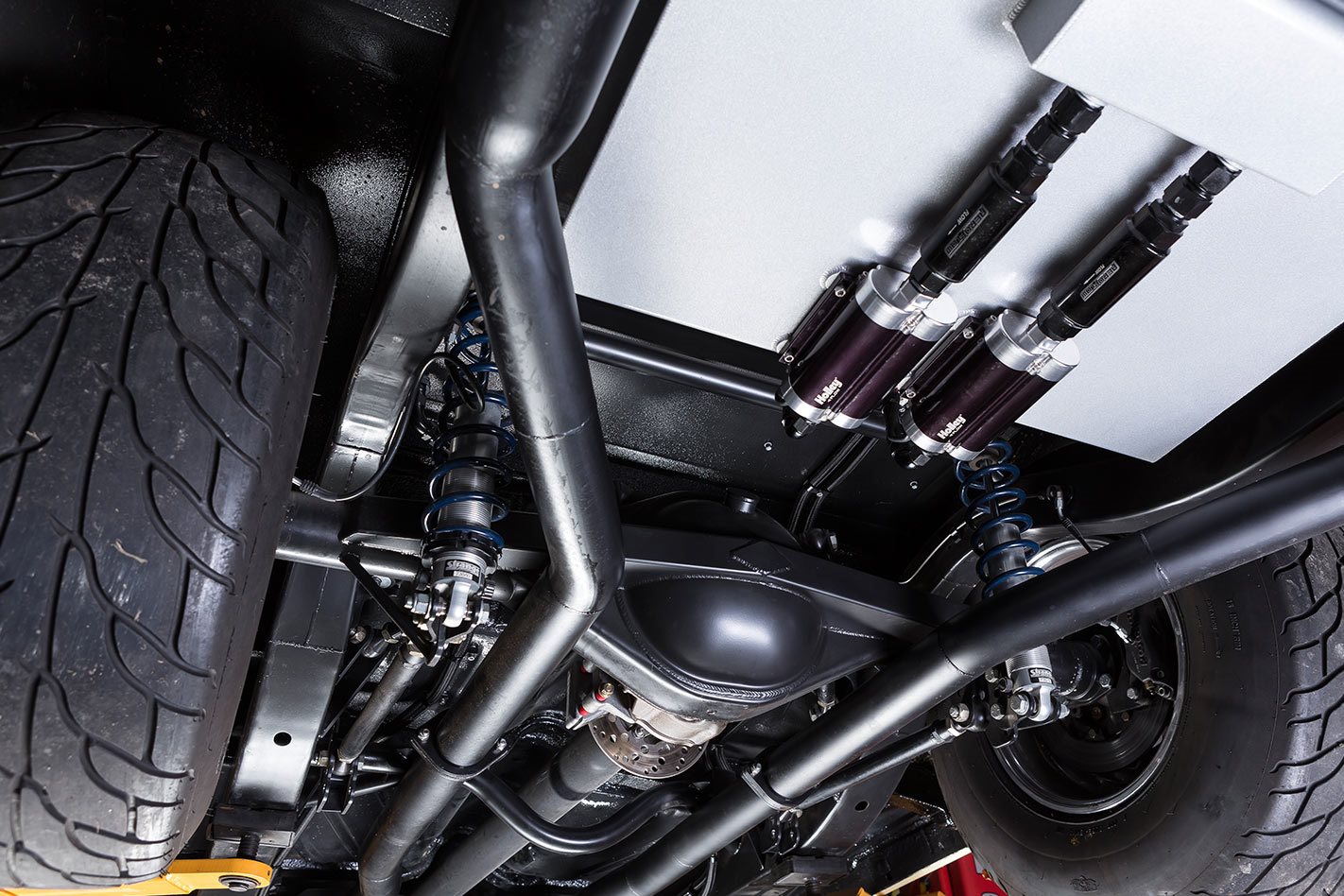 There’s no 10L fuel cell in the back but a huge 120L custom fuel tank sitting under the floor and running into the custom boot. It is worked by two Holley Dominator pumps, one running full-time and the other coming on under boost

Any street car with this sort of power needs a solid platform to work off, and Anthony ditched the Chev’s leaf-springs and steering box for more modern underpinnings. Up front, tubular control arms mount to Heidt drop spindles to keep the ride height low while maintaining full travel through the King Springs coils and Koni shocks. A Flaming River power-assisted rack ’n’ pinion steering set-up has far more precision than the old box. 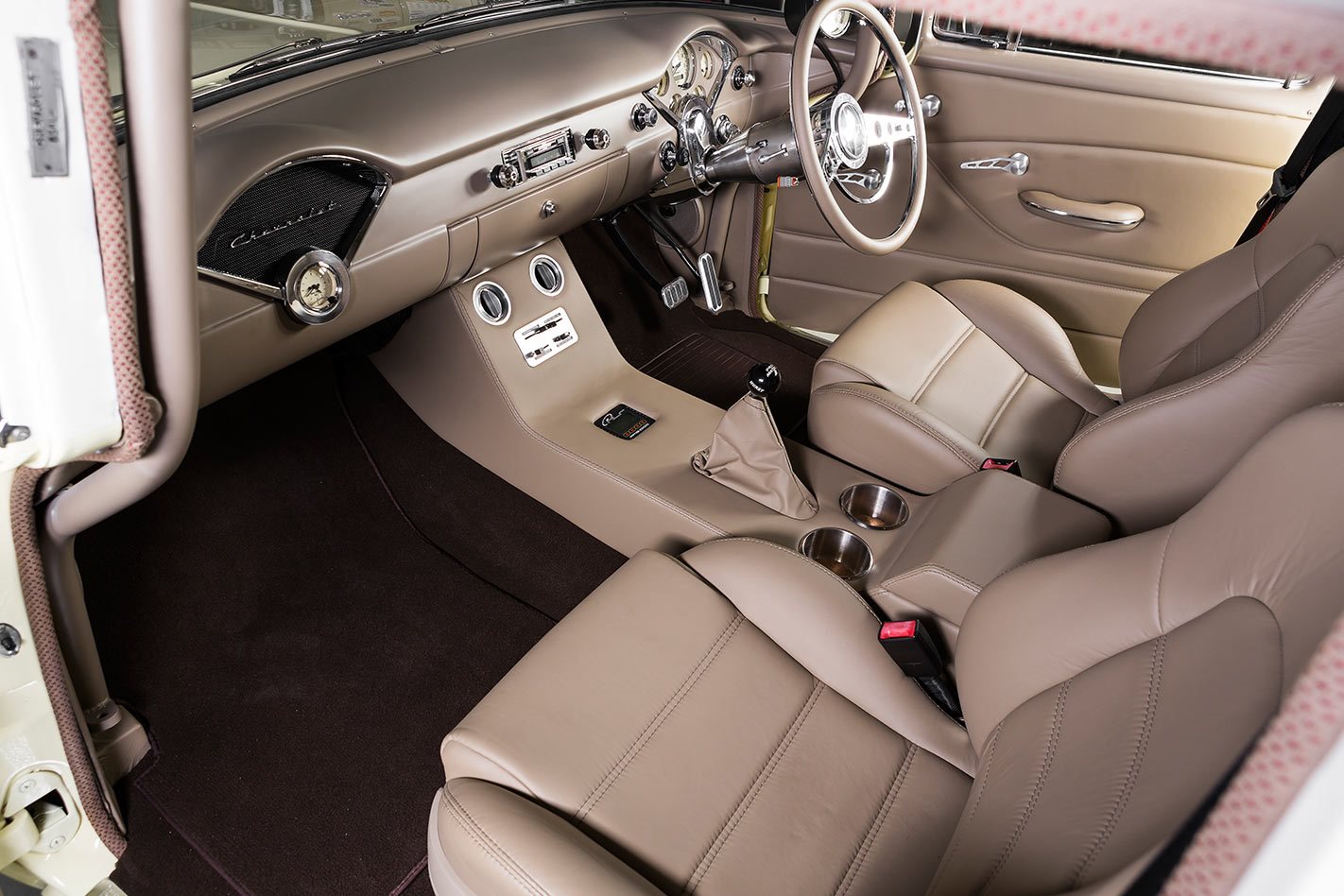 While the Chev has a rollcage to complement that nuclear-tough drivetrain, the rest of the interior is plush for comfy street cruising. Anthony intends on cruising the Chev regularly around Sydney once it has had the final approval from the engineer

Down the tubbed rear end there’s a four-link with Strange double-adjustable coil-over shocks, while Wilwood disc brakes have been used at all four corners, operating off an under-dash VT Commodore booster and master cylinder. 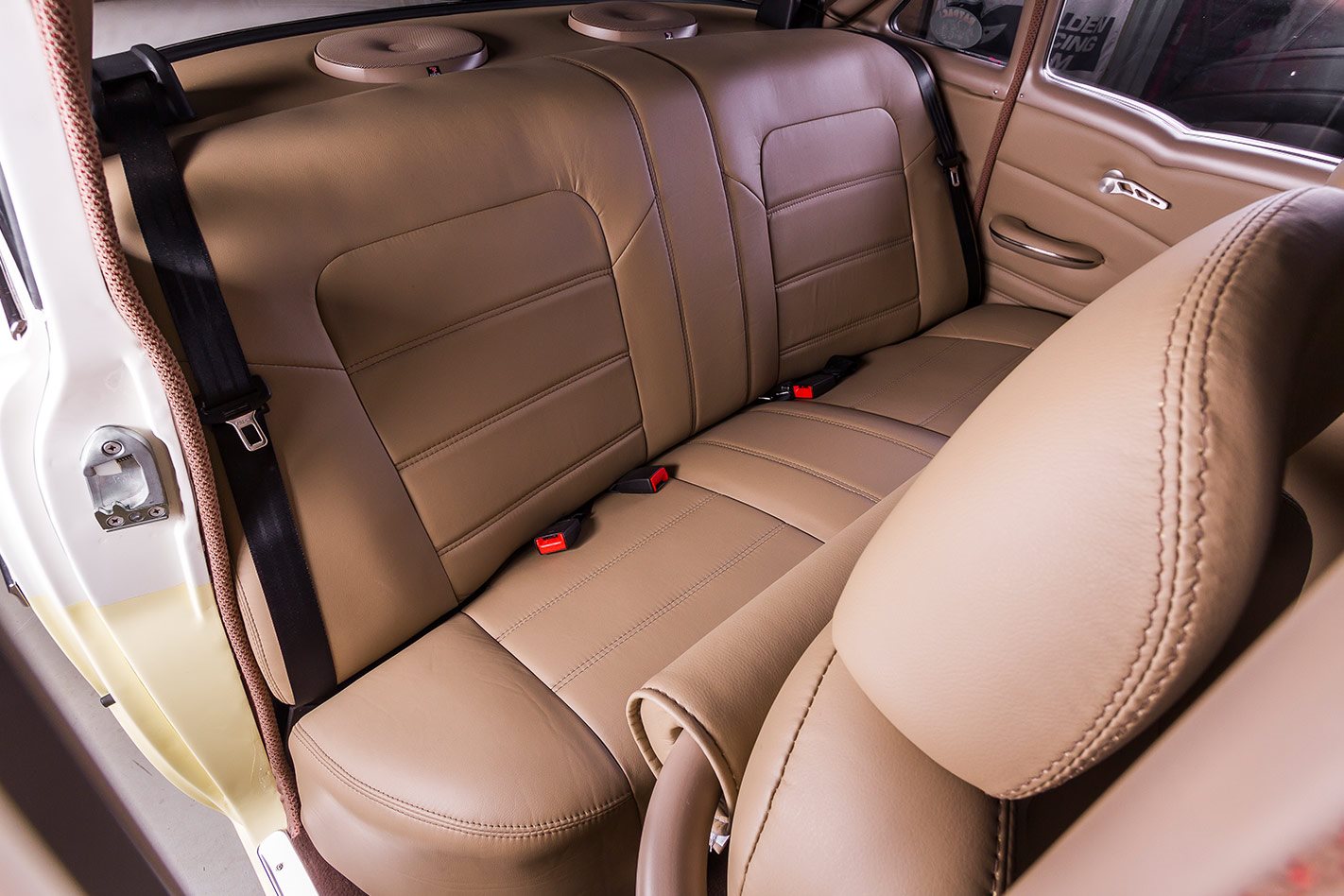 50SICK is a street car, so the interior needs to be a place Anthony and his family enjoy spending time. To that end, there is air con, a Bluetooth sound system, fully retractable seatbelts, child anchorage points, and Auto Meter gauges. Up front, Alltrim covered the XR6 Falcon electric bucket seats in Latte Mushroom vinyl, with a Billet Specialties tiller mounted on the right-hand side and a Hurst shifter in the middle. Such is the quality of the design and trim work, 50SICK picked up Top Interior at the All American Day 2017. 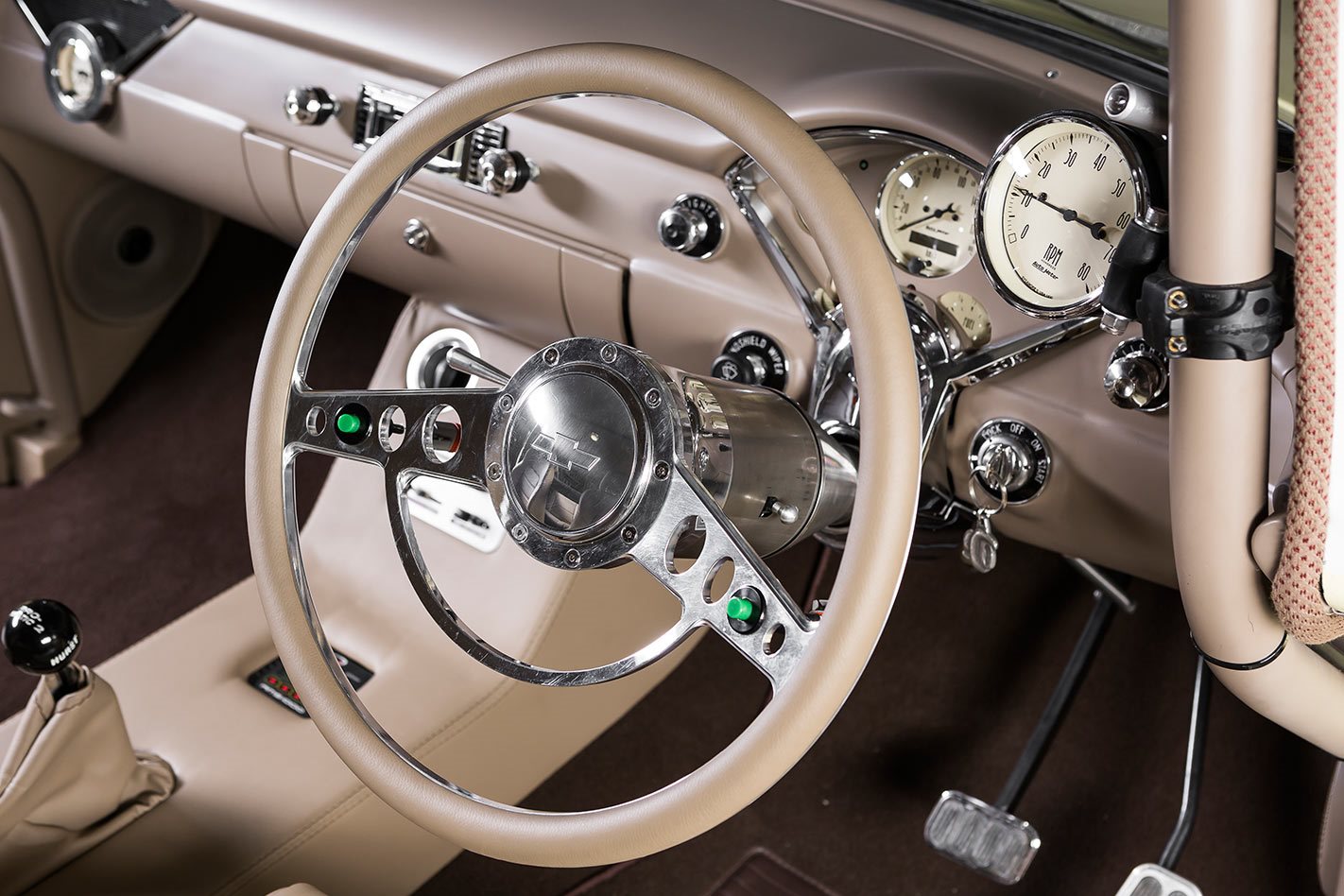 While the tubs, ’cage and twin-turbo motor might seem extreme, Anthony is firm about driving the wheels off 50SICK.

“Everything is done to G-Force Engineering’s specifications, except for the wheels and lack of wiper-washers, as I overlooked them. I have ordered a set of 20-inch American Legend wheels so I can get all the engineering signed off.” 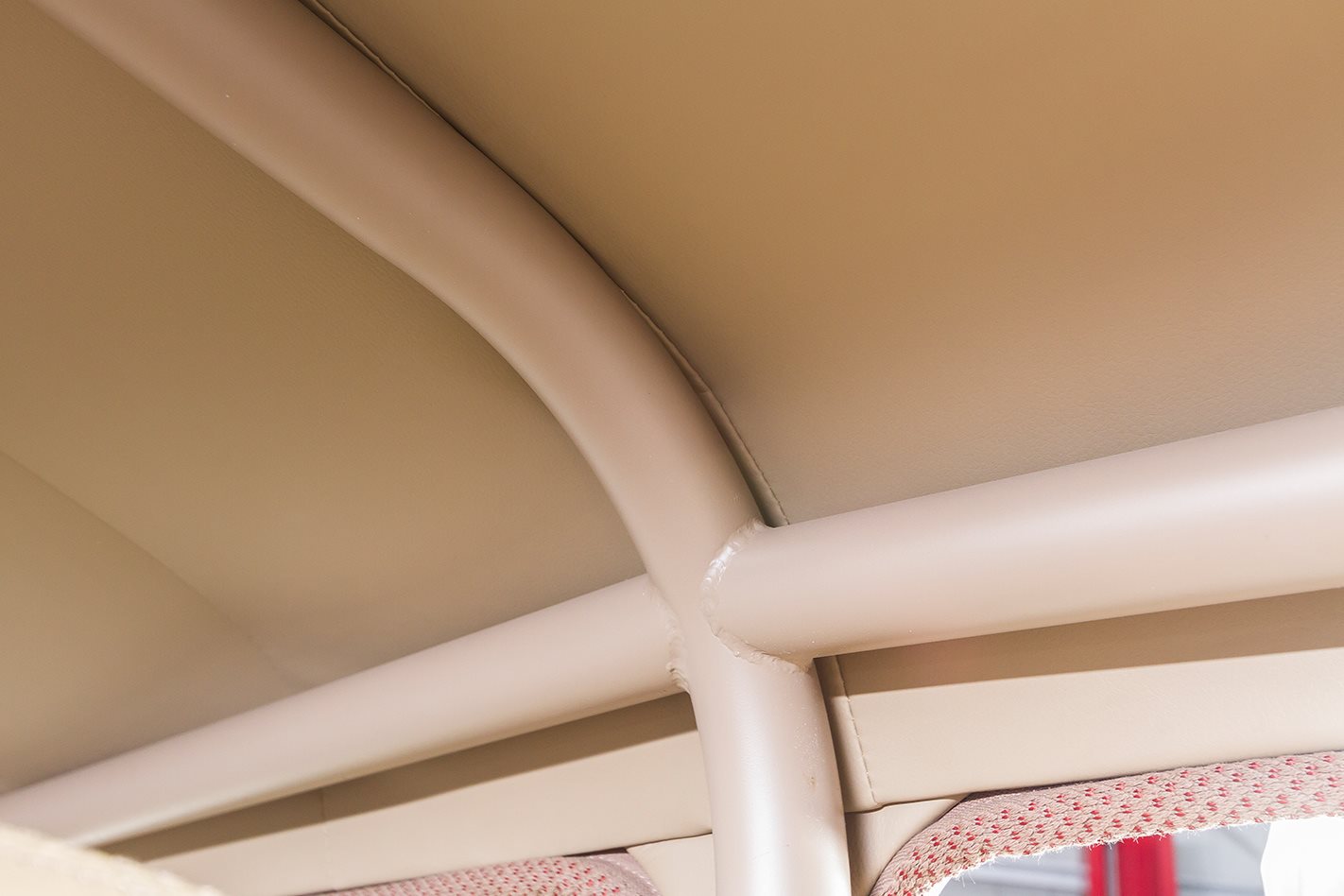 Surely after six-and-a-half years it’s time to focus on enjoying the ’56, right? Not quite; Anthony is a prolific builder and is also putting together an insane drag-only VN SS!

“My wife is very supportive and my kids love it, too,” he says.

“We have gone to four shows and picked up trophies at three of them. The problem is the car turned out way too nice to race, hence why I am building a 315 radial car.” 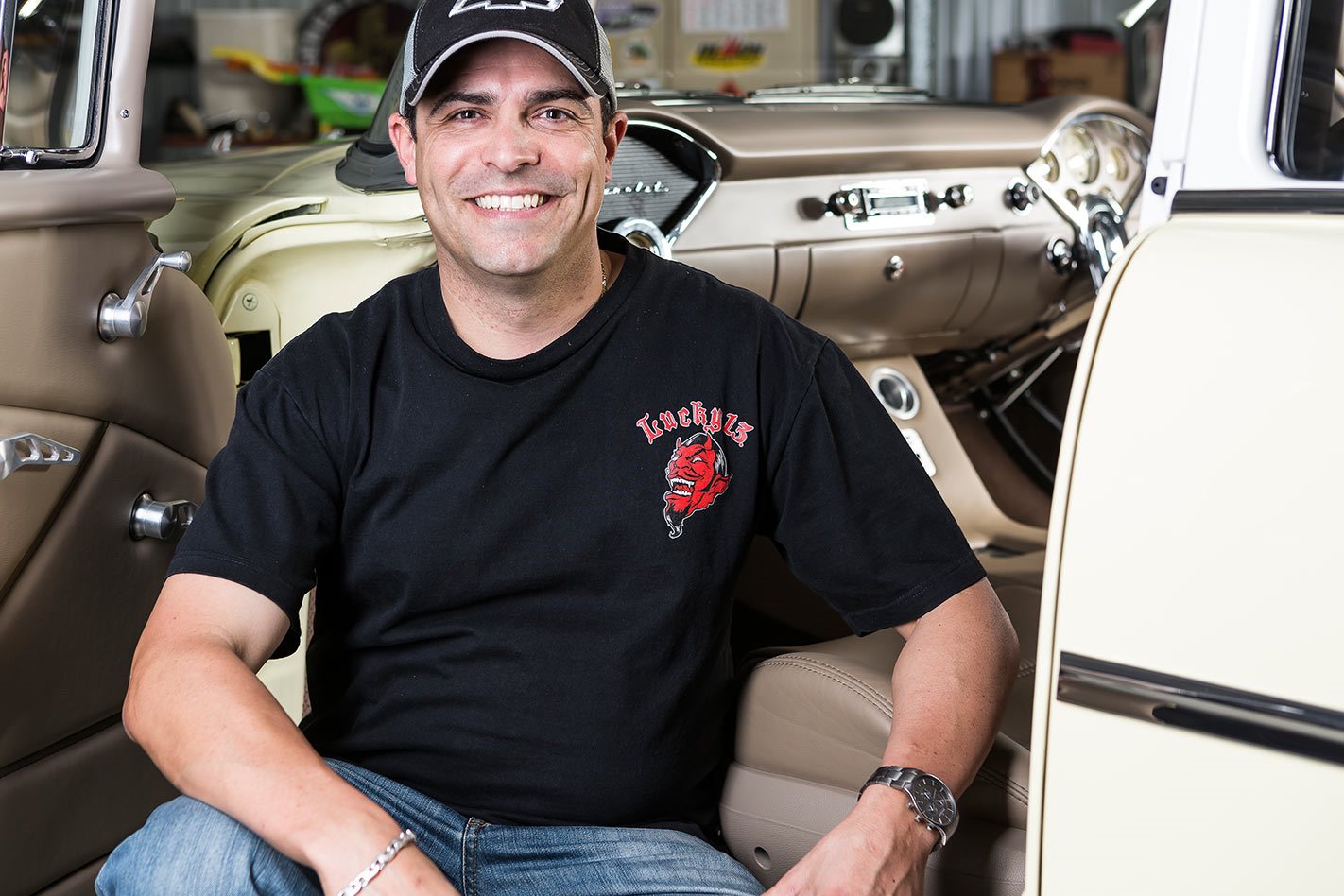 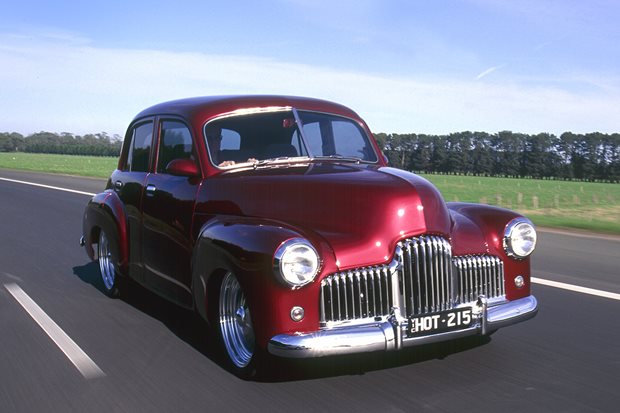 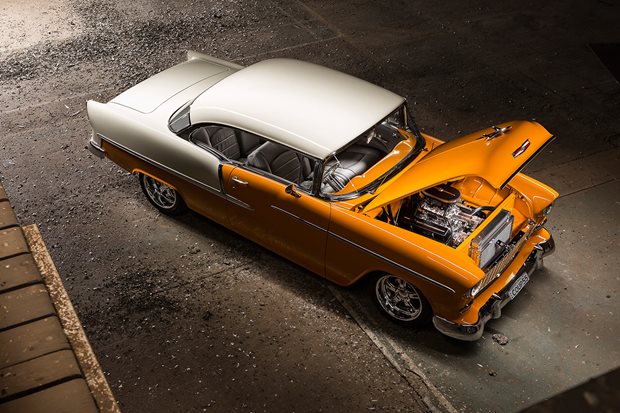 If it's true that good things take time, then this divine shoebox Chev is 21 years good!