I DON’T know about you guys and girls, but whenever I see an old ute done up I automatically walk over for a closer look. I’m always curious to see how well these ageing workhorses have held up after so many years of use – and quite often abuse. More often than not a peek in the tray area gives you a pretty good indication as to how many bales of hay, engine blocks and lumps of wood the old girl has carted in her life. 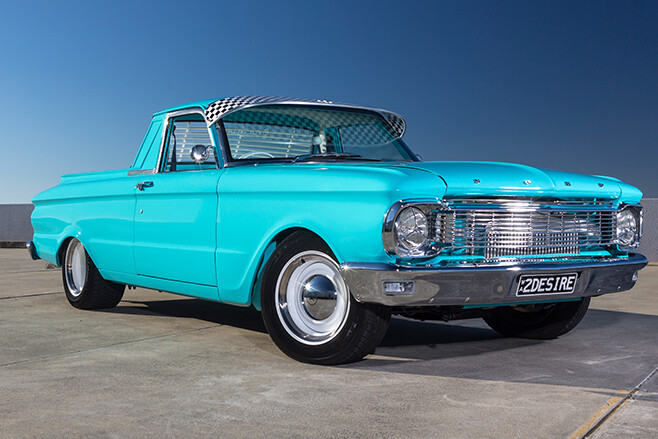 That’s pretty much what went through my head when I spied Jono Clark’s XP ute at Motorvation 31. In the late-afternoon light, the turquoise blue paint had a lovely soft glow and the white steelies and sun visor suggested this was just a laidback cruiser. As I strolled closer I noticed the widened rims, and when I peeked in the back I saw the flat floor and tubs. Hmmm, something’s going on here. A quick look underneath revealed a nine-inch with a McDonald Brothers four-link and QA1 coil-overs. 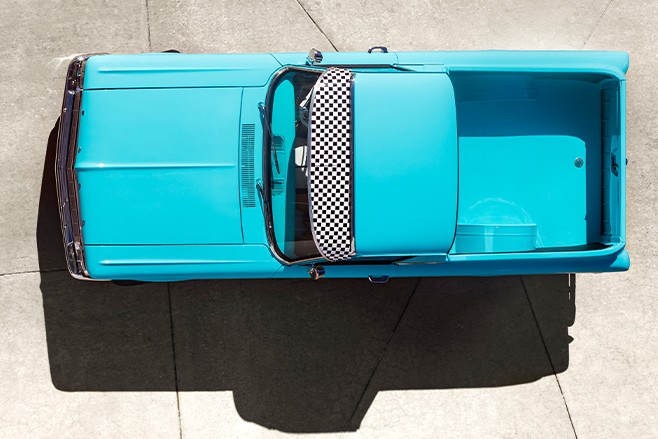 I dusted myself off and headed towards the front to check out what was under the already-popped bonnet, quickly glancing at the interior on the way and noticing the split-bench seat covered in white vinyl and a matching white steering wheel of the factory kind. At this point it was still looking like a 60s cruiser – then I got to the engine bay and had one of those ‘Holy shit!’ moments.

5
Jono used to be a signwriter, and must also be a glutton for punishment, because he put chequered stickers top and bottom on the visor and then clear-coated the lot

Nestled between the towers and well under the bonnet was a beautifully detailed, low-bling, twin-turbo Windsor. There was nothing over-the-top about it, just a simple set of factory ‘Power By Ford’ rocker covers painted in body colour and a really tidy turbo plumbing layout that didn’t detract from the classic look of a carbed V8. If it wasn’t raw cast aluminium, it was black; header wrap, breather hoses, plug leads, carb and intake plumbing were all low-key satin black. The smattering of shiny stuff was left to the top shock mounts, radiator cap and turbo inlets. It looked the business – and it is the business.

5
Anyone familiar with old Falcons will know you can't fit a 265/50/15 tyre underneath one. The mini-tubs are a big help, but the raised rear guards are advantageous as well, especially when you need to change a tyre

By this stage I still hadn’t found the owner, but I did manage to collar Wayne Smith from Performance Carb Tuning, who told me that the little Windsor wasn’t so little any more, measuring up at 363 cubes! With just 8.5psi of boost on a safe tune, the car had already made 505hp at the wheels.

5
This is one of the neatest twin-turbo set-ups you'll ever see, and all completely under the bonnet. The charged air goes through a front-mount intercooler before heading along the left-hand guard to the back of the engine bay and into the car

I finally tracked down Jono to have a chat about what makes him tick and how the car came about, and not surprisingly, it was passed on in the genes from his father and grandfather: “They were into vintage cars like Model Ts and Rileys, the kind of cars they used to get around in when they were young,” Jono said. “I used to love going to my grandfather’s place every Sunday and checking out the garage; he always had a project on the go. I was always into cars. When we were little, me and my brothers would play with Dinky cars; we’d put them on road maps and do burnouts along the streets and stuff like that.” 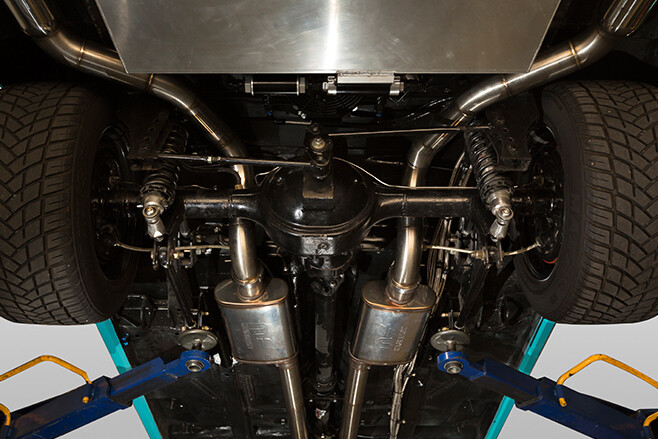 After chatting for a while, I soon realised Jono was one of our Kiwi cousins, although his accent has softened after 10 years in Western Australia. “I’m originally from Invercargill – you’ve probably seen The World’s Fastest Indian? Down there, per head of population, the amount of people that own old cars is crazy. The population is only 60,000 but everyone’s got old-school American cars. I heard about Australia and the money you can make, that’s what got me over here. I worked away for six years and the habit for cars grew from there as I started to get some money.” 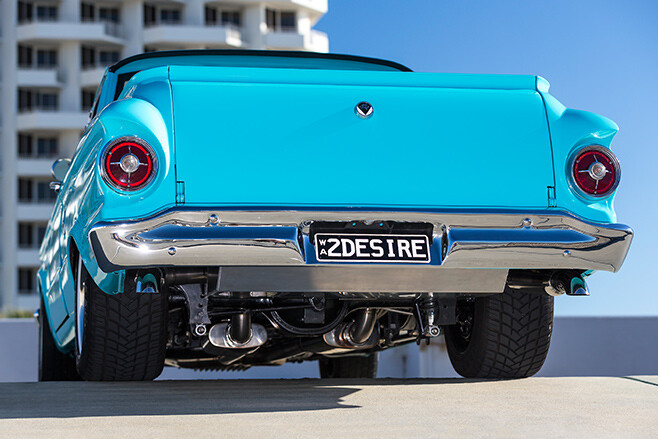 Jono did have his heart set on a ’40 Ford pick-up, but the timing was all wrong. While he was lamenting his loss, a workmate spotted the XP ute on eBay, resplendent in its bright orange paintwork and polished big-diameter five-spokes. “I actually got the ute from Melbourne off eBay and it had a little Weiand top-mount blower and a little scoop, so the bonnet already had a hole in it,” Jono said. “To me, that didn’t appeal for the look I was going for; I wanted more of a sleeper. But it had all the running gear I needed to be able to run the 363 engine. I rang the guy and he said he wouldn’t let it go for less than $20,000, but he wanted to let the auction run out, so I put a bid on for $15,000 and I won it!”

5
The interior looks pretty original, but it's not at all. A split-bench out of a coupe, big Lokar shifter and XA electric window switches all fit with the theme perfectly. The stock dash cluster has been filled with Ford Motorsport classic gauges and the stock white tiller finishes it all off

Jono drove it around for a little bit, but it wasn’t long before he found the limits of the engine and gearbox: “I gave it a bit of a workout and popped a couple of the lifters and burnt the transmission out as well. Paul at KEAS Transmissions opened it up and it was stuffed. It was only a 28-spline C4 and it wasn’t going to be enough to handle the new motor, so he gave me a quote to build another C4 or a Powerglide, but he made the prices real similar because he wanted me to go to a Powerglide! It was kind of a no-brainer.” 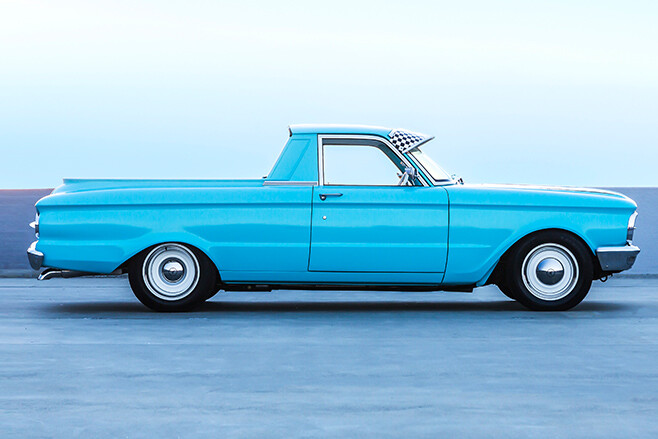 While Jono’s intentions were honourable in buying a car that already had a lot of the hard work done, in the end he just about changed everything. “I bought it thinking it was the cheapest option because it already had the running gear, but in hindsight, I’ve had to upgrade everything on it anyway as far as the driveline goes. It was all right, but not for that amount of power.” 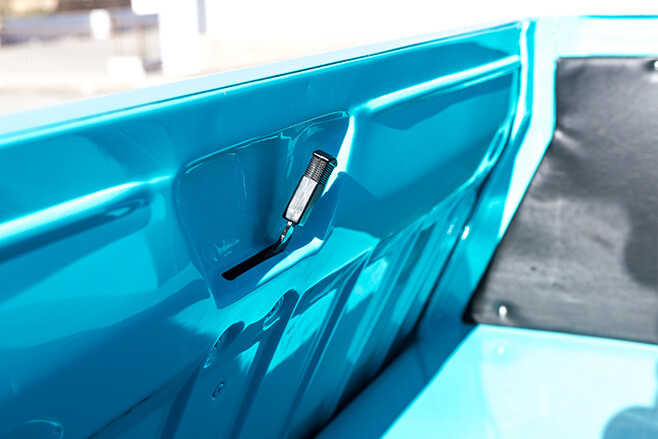 The good news is, the power is only going to go up. With some E85 in the tank and the boost wound up to 15psi, there should be anywhere between 650 and 700hp at the treads. “The motor is good for 25psi, but I don’t want to push it too hard; I just built it as a street car, not a drag car. 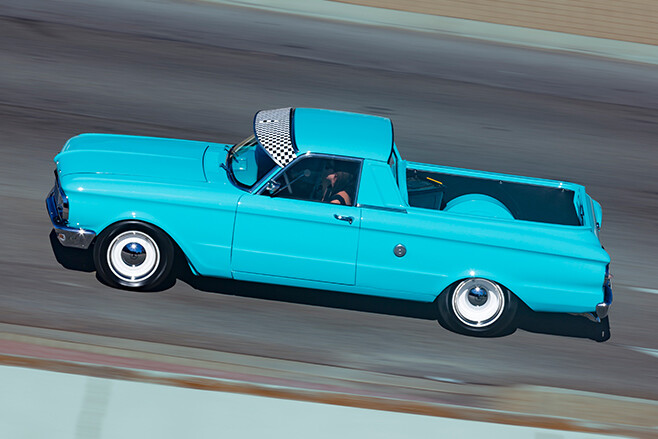 Having said that, he does plan to run a number, so when that happens we’ll let you know how it goes.