SCOTT Briant has sold his NAN747 Datto since our feature in SM, Dec 2013, but he hasn’t stopped building crazy cars. His latest is a 1969 Mitsubishi Colt, powered by a twin turbo Magna V6!

He’s even build a ’69 Bedford J5 tow truck for it, which is itself propelled by a single turbo Holden V8. While the Colt is a track-only deal, the Datsun was a genuine street car that was quick, was embarrassingly cost-effective to own and was built to an awesome theme as well. Let’s check it out: Shepparton lad Scott Briant is a man with a penchant for the nation’s underappreciated cars. For starters, he once built himself a tough tubbed Corolla wagon with a blown Holden 355ci stroker (SM, Sept 2009), but he soon found himself without much of a use for it. “All the events stopped in Melbourne,” he says. “There was just nothing we could do in the wagon. I thought I’d offload it and build something that I could use daily.”

His solution was a D22 Nissan Navara with a 300ZX VG30 turbo motor on LPG, which was fast, practical and reliable. “I wanted something cheap that I could drive every day. E85 wasn’t an option because it isn’t very common in the bush, but LPG is available wherever I go,” Scott explains.

The only downside? An unfortunate tendency to backfire and blow the airbox to smithereens! 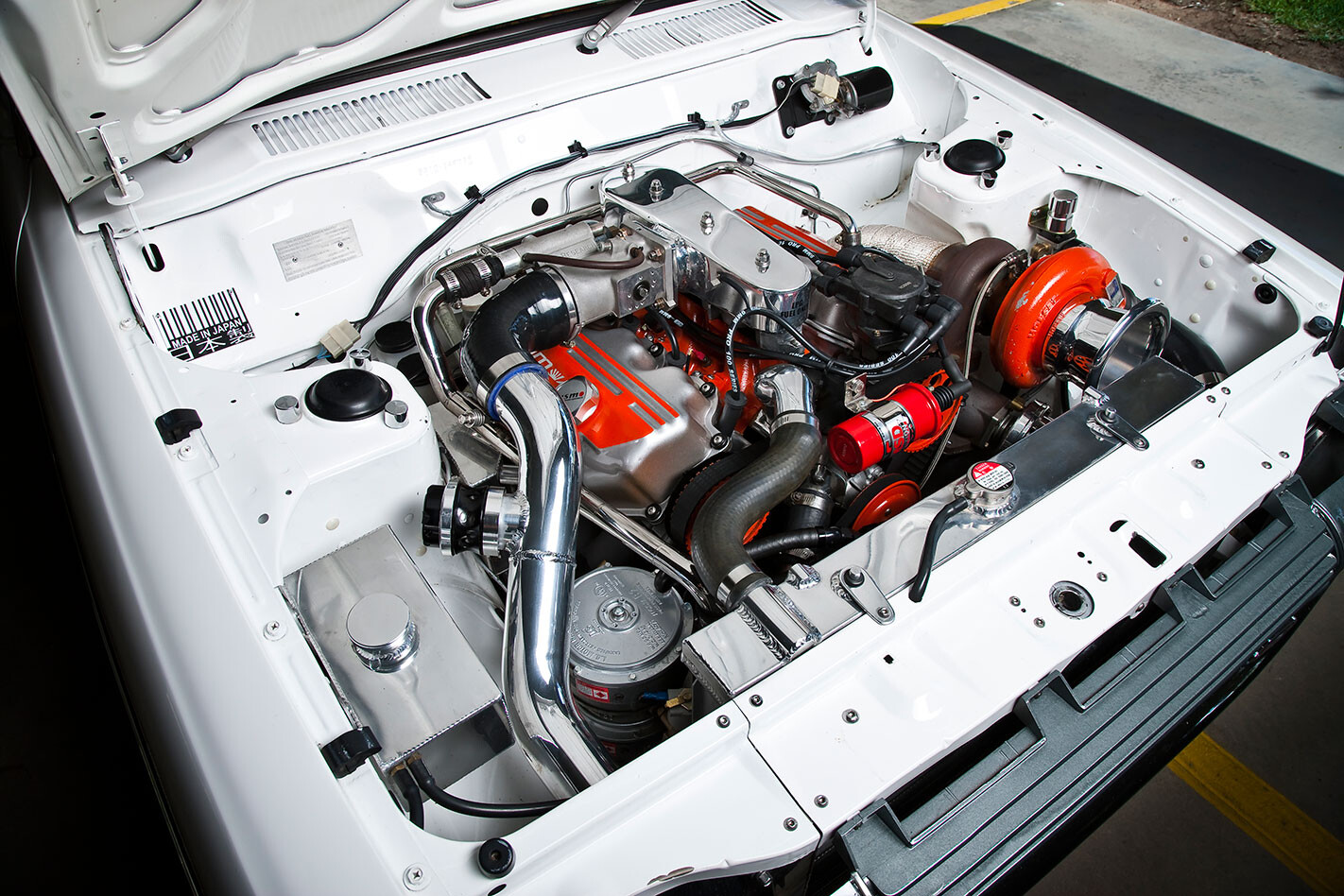 “As I was trying to figure that one out, I bumped into a local guy, Paul Sera, who had a fast VL that was running well on LPG. When I asked who did his tuning, he put me in touch with Jason at Tunnel Vision. Jason sorted it out and I never looked back.

“Then I started wondering how the engine from the Navara would go in a lighter smaller car so I bought a KE55 Corolla and put it in that. We ended up doing 11s at over 120mph, but I got sick of everyone saying it was just a Toyota with a Nissan engine, so I decided to build something that was all Nissan.”

Scott sold the Corolla to a mate and then started searching for something with a Nissan badge to start afresh. The search didn’t last long. 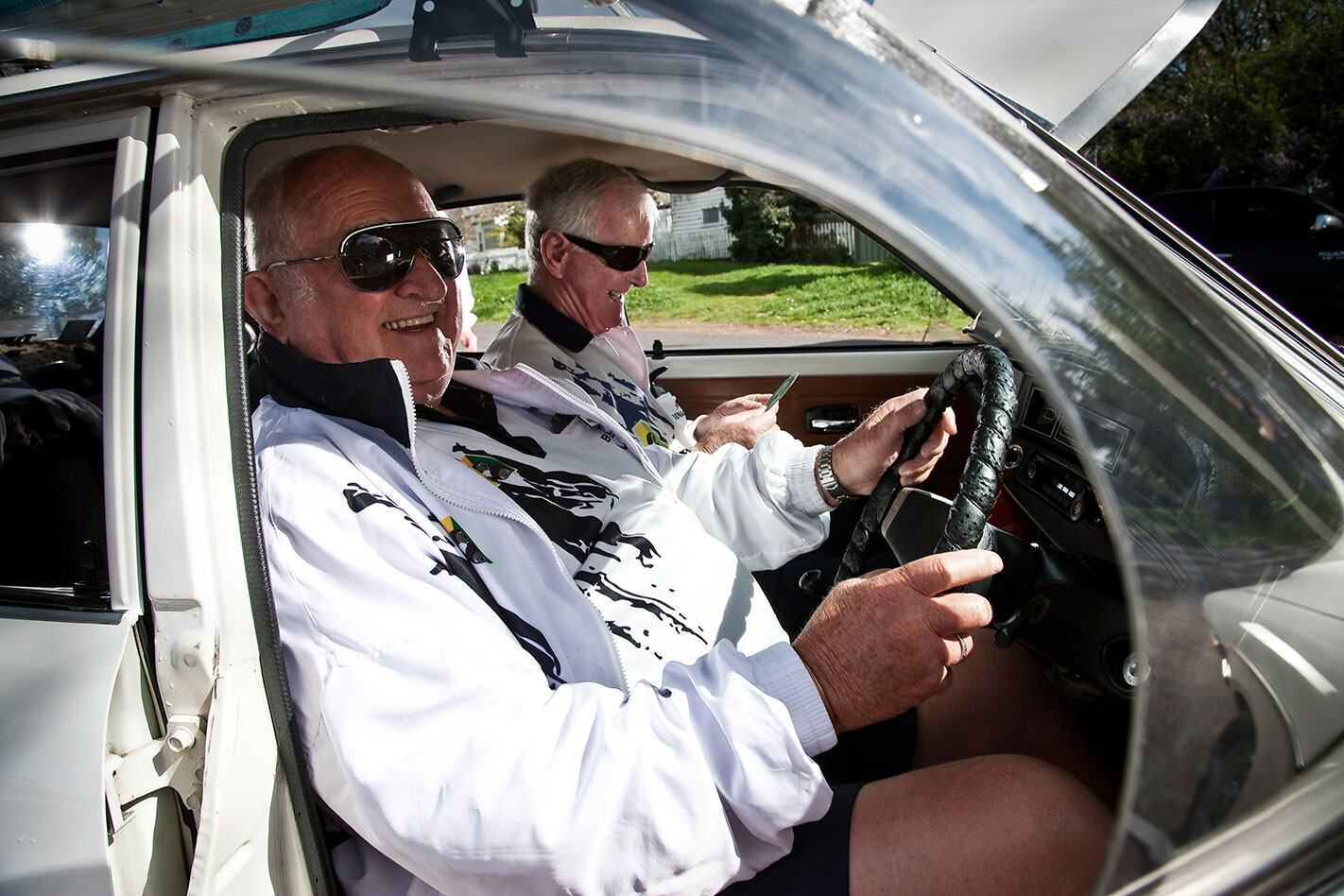 “The 120Y was in a paddock in Shepparton with a blown head gasket. The guy had pulled the head off, then realised he didn’t know how to fix it. Overall it was in good condition, not much rust or anything, but they lived on a dirt road so it had heaps of stone chips. I mean, every piece of glass on the car was chipped in some way! I gave it a paint job and new glass to freshen it up.”

But obviously that’s not all he did. Up front he squeezed the three-litre Nissan V6 into the engine bay, a task that ended up much less hassle than he thought.

“It was surprisingly easy to fit,” Scott says. “The engine bay and trans tunnel are untouched. The only place we’ve cut is where we recessed the dump pipe into the strut tower.” 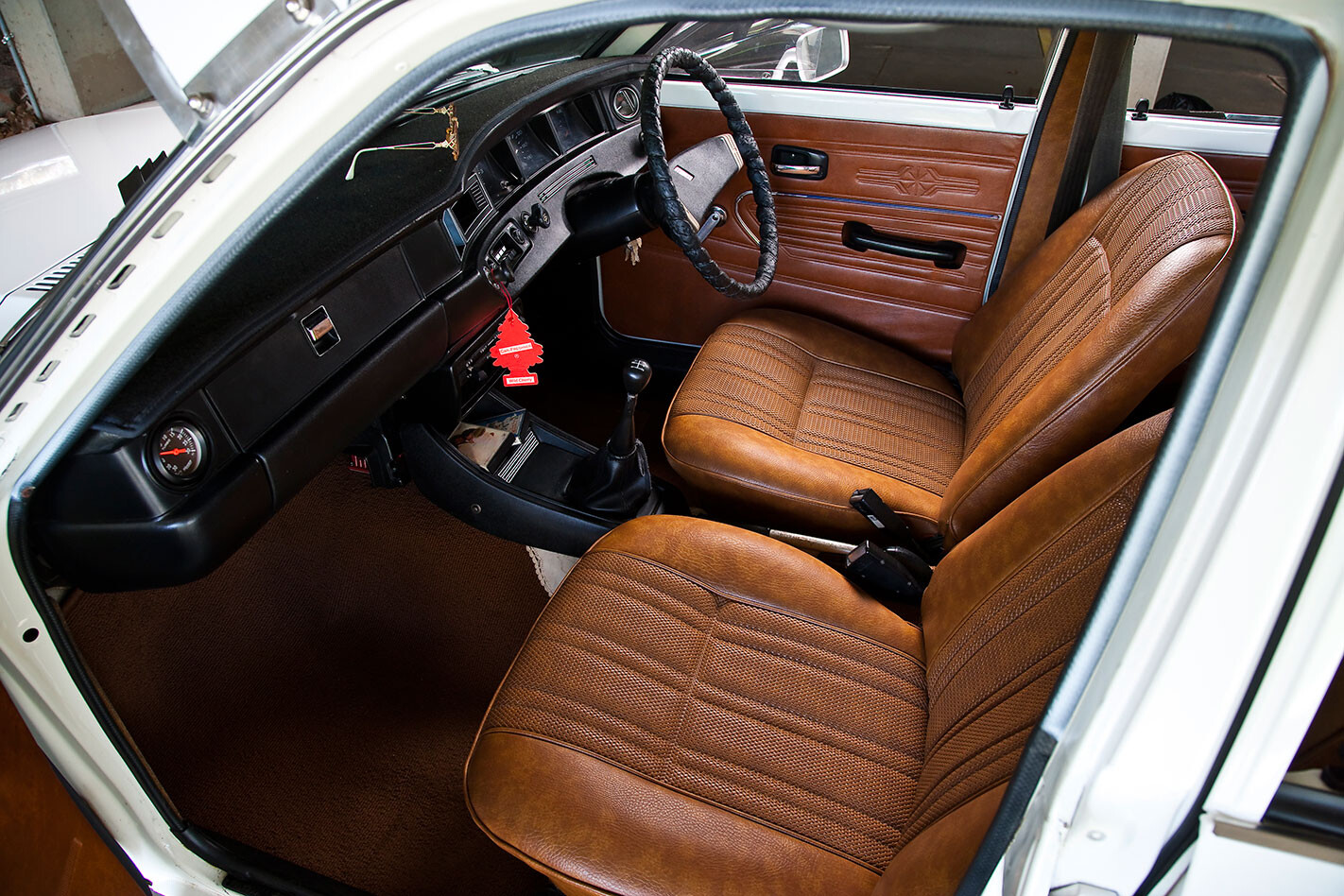 The dump pipe hangs off the back of a decently sized Holset HX40 turbo. Usually found on trucks and tractors, Holset isn’t a name commonly associated with the performance aftermarket, or indeed even petrol-powered vehicles.

“Basically I didn’t want to spend $1500 on a new turbo!” Scott laughs. “I went on eBay and these Holset turbos popped up from a tractor place not too far from home. He had them listed for $350, and when I offered him $500 outside the auction he declined, saying he had been getting upwards of $700 for them. Anyway, I ended up winning it for $350 because nobody else bid! He should have taken my $500!

“The exhaust housing was too big because they’re off a diesel. I researched them and there’s a place in the States, Tim’s Turbos, that use Holsets on everything. He makes smaller exhaust housings for them so I picked one up for $US210.” 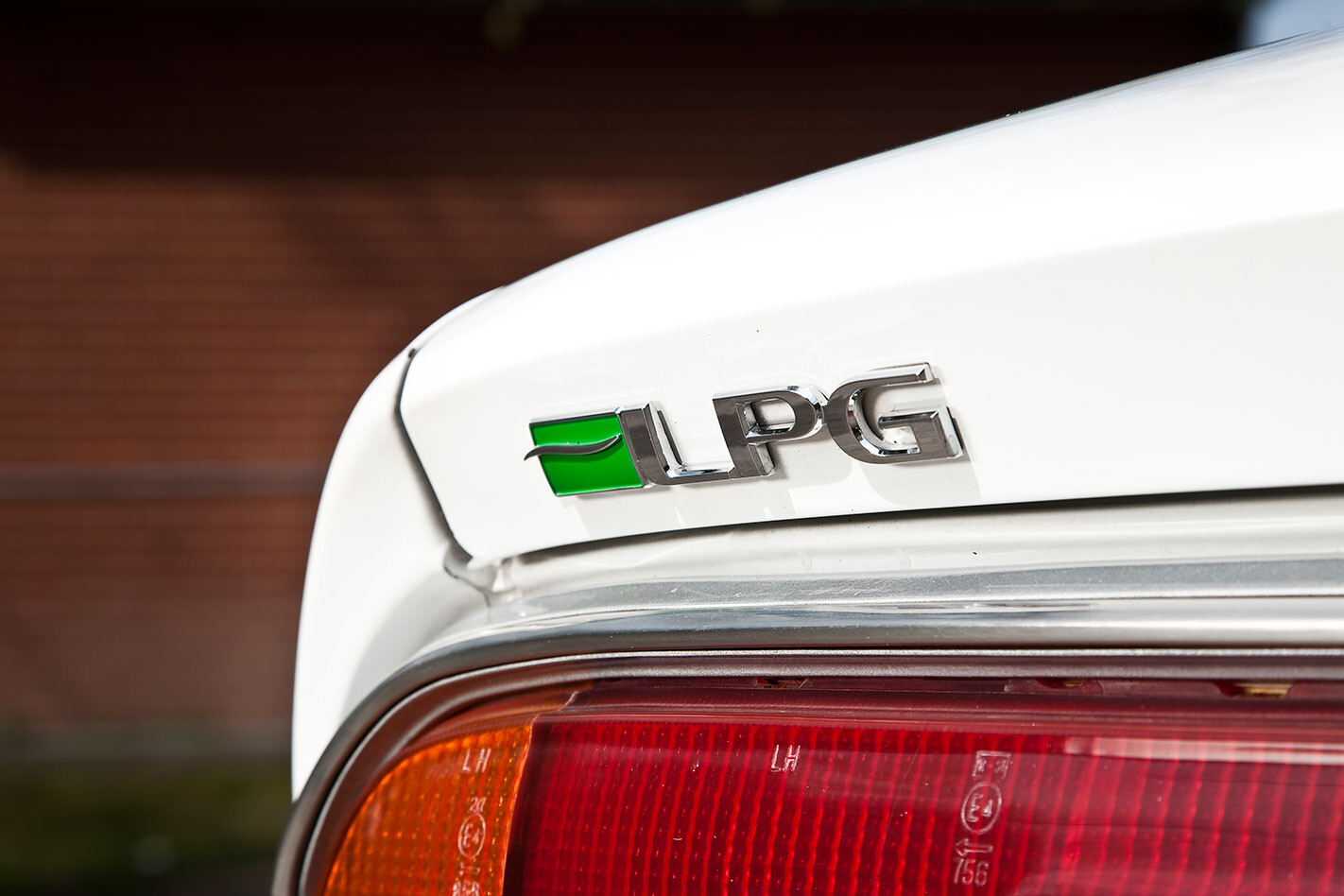 Everything south of the intake manifold remains as Nissan intended, but up top Scott fashioned his own plenum out of scrap aluminium. “I work as a fabricator in truck smash repairs, so a lot of bits came out of the bins at work. We had a Kenworth bullbar come through and I thought, ‘I could make a plenum out of that corner post.’”

The fuel injector bosses in the factory manifold were filled and the LPG hardware affixed in its place. “I didn’t want injectors, or wiring, or any mess in the engine bay. The LPG is a very neat set up,” he says. Up the back, there’s a 70-litre LPG tank feeding twin B2 converters that are mounted low and out of sight, with a single Gas Research S440 mixer hanging off the custom bullbar intake. Unlike most LPG cars, Scott’s 120Y runs a Haltech E6X, which he uses just to manage the ignition maps. Scott reckons the D22 Navara gearbox is plenty strong enough, but he’s looking at bolting a Jatco four-speed auto into it soon. “We’ll probably shave a full second off the quarter mile times with the auto,” Scott says. Right up the back there’s a Borg Warner diff donated by an R31 Skyline. Borgies are slightly longer on one side than the other, and Scott found that by simply shortening the factory long axle and housing, the Skyline diff would slot nicely under the rear of the 120Y.

He has never had the little Datto on the dyno but, after six hours of road tuning around Melbourne’s highway network, Scott and Jason called the tuning done and, caught up in a wind of triumphant enthusiasm, Scott dumped the clutch in third gear for the benefit of the Tunnel Vision boys. “The factory shocks snapped clean in half! So I grabbed what was left of one and ran around the corner to Pick-a-Part. The closest things I could find that looked a little stronger were Corona shocks. I paid $16 for second-hand Corona shocks and that’s what’s still in there,” Scott chuckles. Those $16 shocks round out a pile of receipts that tallies no more than $11,300 from start to finish. How’s that for a budget sleeper?

It’s not just a budget sleeper though; it’s a cheap-to-run daily driver that’s proved as reliable as a Swiss watch. “It’s faultless,” Scott says. “I drove it to Pakenham for the weekend with the family. I even showed off for a few mates from down that way that hadn’t seen it, and I just couldn’t break it!” On its first and only outing at the drags, the baby Datsun ran 11.2@126mph, but the best bit is the fuel economy. “It was a two-and-a-half hour round trip and we did nine 11-sec passes. It cost just $26 in fuel for the day,” Scott says, and that’s just amazing. If this is the only Datsun 120Y Street Machine ever features, at least we can all agree that it was definitely worthy.